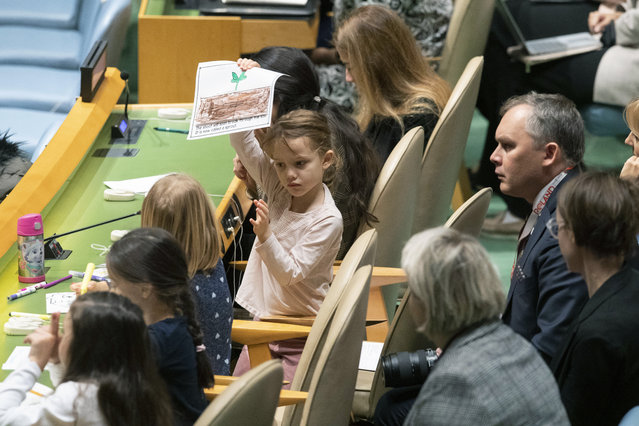 A young member of the Polish delegation shows off a drawing she made during the 30th anniversary of the adoption of the Convention on the Rights of the Child, Wednesday, November 20, 2019, at United Nations headquarters. (Photo by Mary Altaffer/AP Photo) 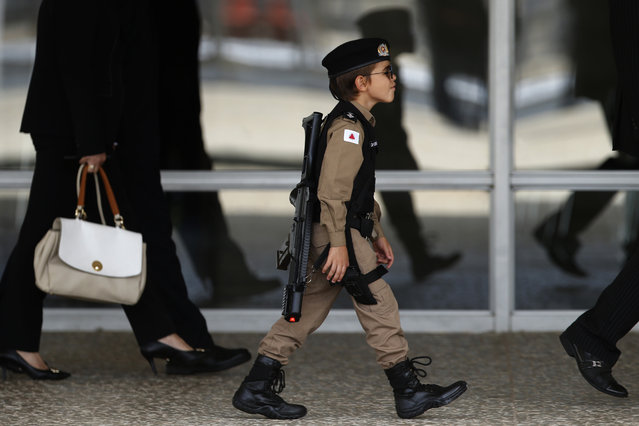 A boy dressed in a military police costume arrives to watch the Changing of the Guard at the Planalto Presidential Palace, in Brasilia, Brazil, Thursday, November 28, 2019. (Photo by Eraldo Peres/AP Photo) 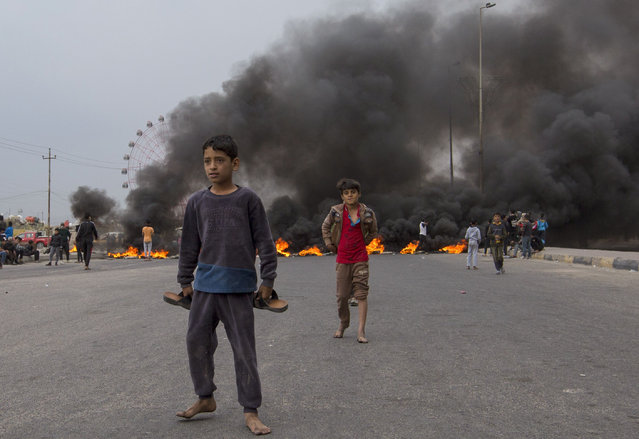 Iraqi children play on a street blocked with burning tyres, amid a general strike in the southern city of Basra, on November 25, 2019. The demonstrations rocking the capital and Shiite-majority south since October 1 are the biggest grassroots movement the country has seen in decades. Sparked by outrage over rampant government corruption, poor services and lack of jobs, they have since gone straight to the source: calling out the ruling system as inherently flawed and in need of a total overhaul. (Photo by Hussein Faleh/AFP Photo) 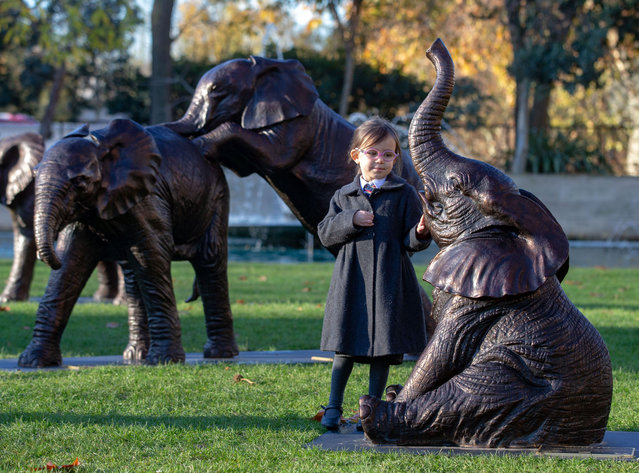 Schoolchildren unveil 21 bronze life-sized elephants at Marble Arch in London, England on December 4, 2019. The sculptures, by artists Gillie and Marc, have been created to highlight the plight of the species which could face extinction by 2040. (Photo by Mark Thomas/Rex Features/Shutterstock) 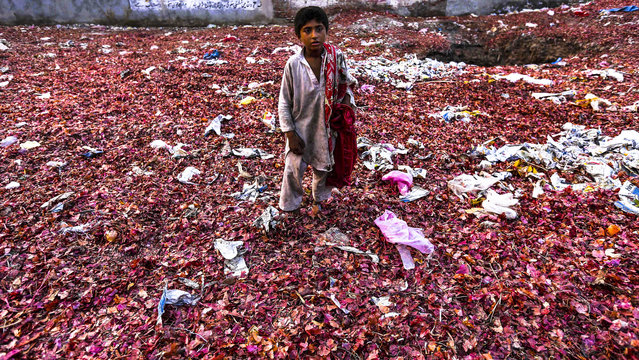 A boy searches for onions between grocery waste at a market in Peshawar, Pakistan, 19 November 2014. (Photo by Bilawal Arbab/EPA) 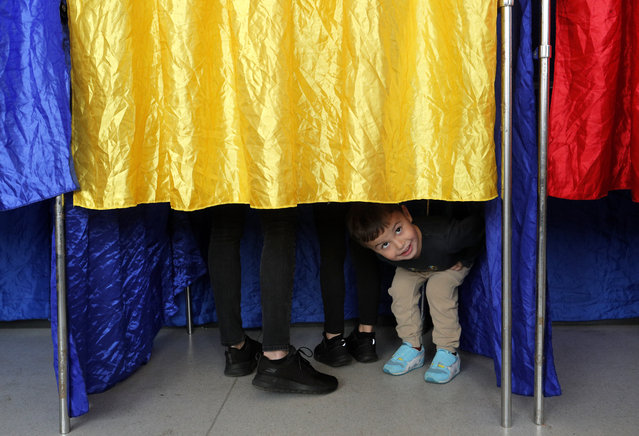 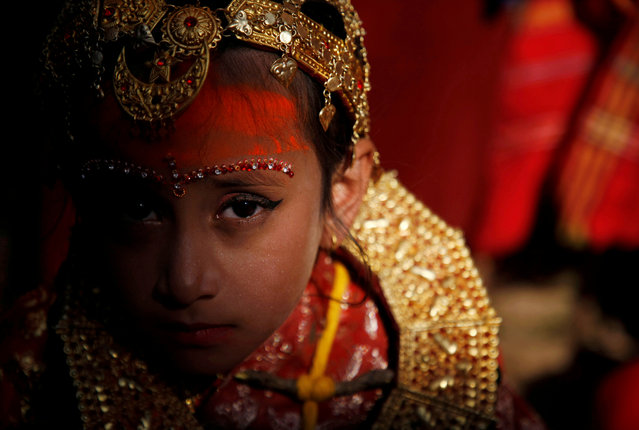 Light illuminates a Newari girl as she takes part at the Ihi ceremony in Bhaktapur, Nepal on December 6, 2019. The two-day ceremony begins with purification rituals and ends with “Kanyadan” (giving away the virgin) of the girl by her father. A Newari girl gets married thrice in her life, first with Bel, the fruit of a wood-apple tree, secondly with the sun, and lastly with her future husband. (Photo by Monika Deupala/Reuters) 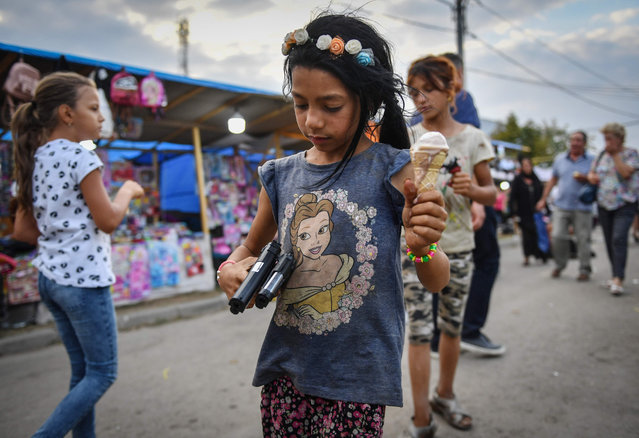 A girl holds toy guns and icecream during the annual Autumn fair on The Day of the Cross in Tandarei city, southern Romania on September 14, 2019. (Photo by Daniel Mihailescu/AFP Photo) 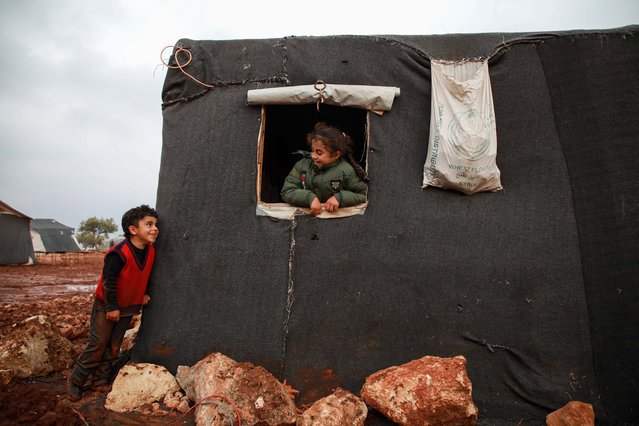 A boy and a girl looking out the window of a tent exchange glances, at a flooded camp for displaced Syrians near the village of Killi in the north of the northwestern Idlib province on December 5, 2019. (Photo by Aaref Watad/AFP Photo) 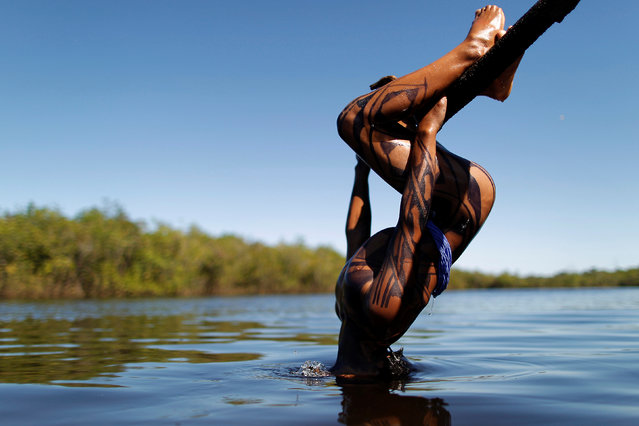 A Yawalapiti boy dips his head into the Xingu River in the Xingu National Park, Mato Grosso State, Brazil, May 9, 2012. (Photo by Ueslei Marcelino/Reuters) 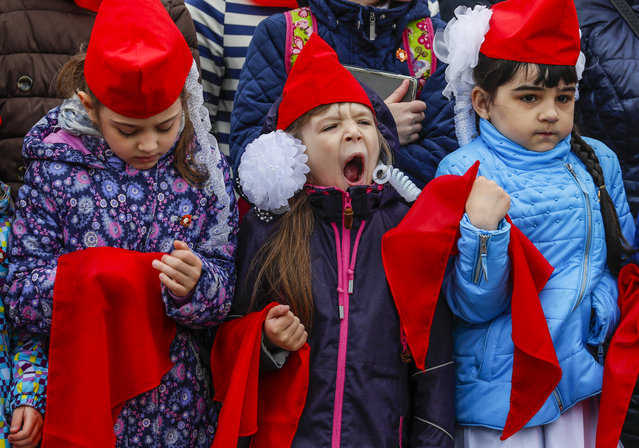 Members of the Russian Young Pioneers attend a ceremony, organized by the Russian Communist Party, welcoming new members to the organization, in Red Square, Moscow, 21 May 2017. The organization, a relic of the Soviet era and totalitarian society, was an element of communist education and propaganda at school. Russian schools are currently reviving and promoting the moral values of the pioneer organisations. (Photo by Sergei Ilnitsky/EPA) 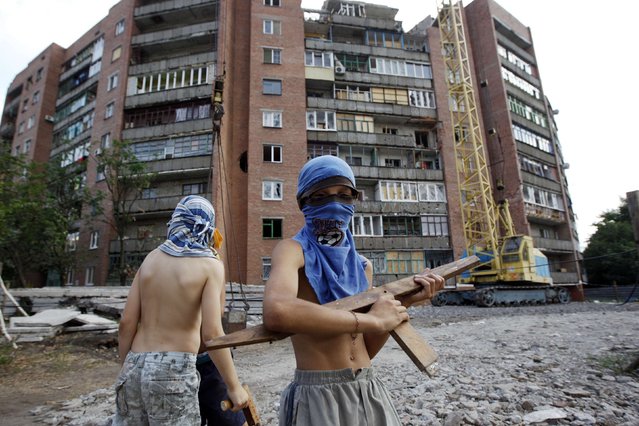 Boys play a game of war between Ukrainian army and pro-Russian separatists in eastern Ukrainian town of Kramatorsk August 7, 2014. (Photo by Valentyn Ogirenko/Reuters) 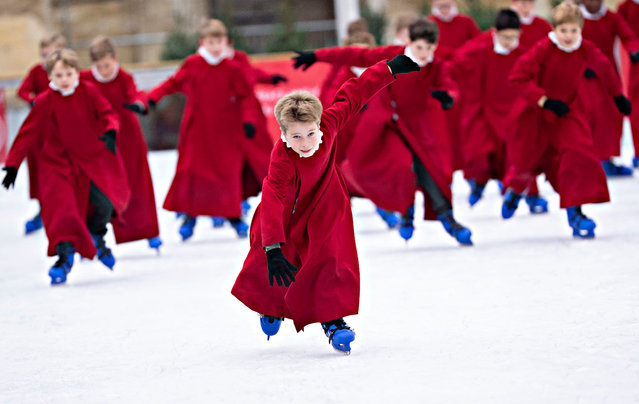 Choristers take to the ice before the public opening of a rink at the city’s cathedral in Winchester, England on November 20, 2019. (Photo by David Hartley/Rex Features/Shutterstock) 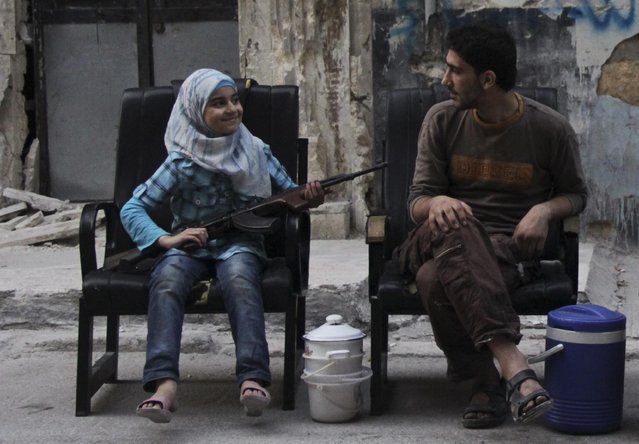 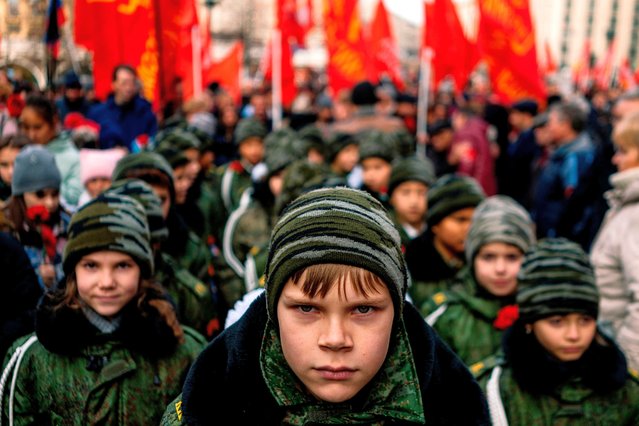 Cadets and Russian Communist party activists and supporters attend a flowers-laying ceremony at the Lenin's Mausoleum dedicated to the upcoming 102th anniversary of the Bolshevik Revolution also known as the October Revolution in which Vladimir Lenin’s Bolshevik Communist government came to power – on Red Square in downtown Moscow on October 29, 2019. (Photo by Dimitar Dilkoff/AFP Photo) 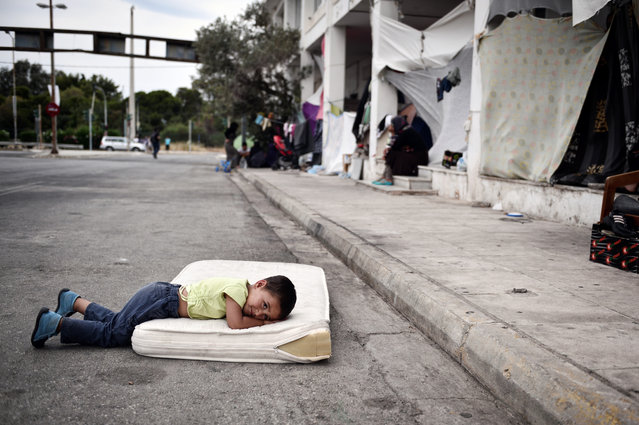 A refugee boy rests in the makeshift camp situated at the old Athens airport on June 13, 2016. (Photo by Louisa Gouliamaki/AFP Photo) 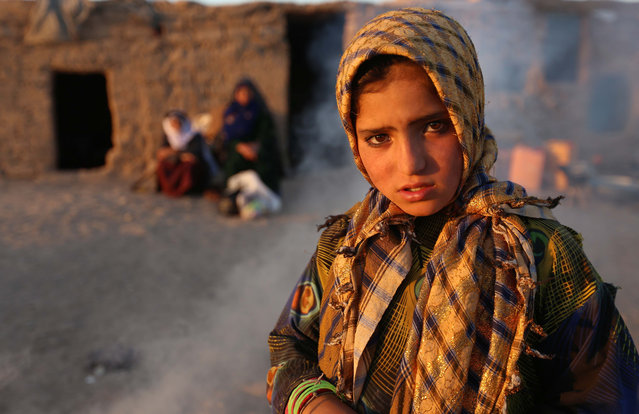 A young internally displaced from Faryab province poses for a picture near her temporary shelter at an Internally Displaced Persons (IDPs) camp on the outskirts of Herat, Afghanistan, 13 October 2015. (Photo by Jalil Rezayee/EPA) 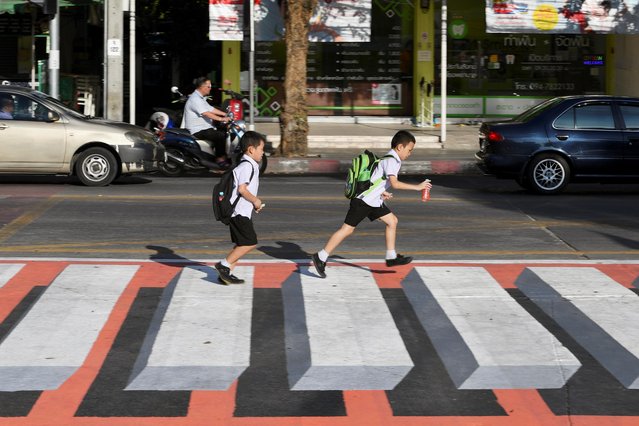 Children walk past a 3D pedestrian crossing in Bangkok, Thailand on November 28, 2019. (Photo by Chalinee Thirasupa/Reuters) 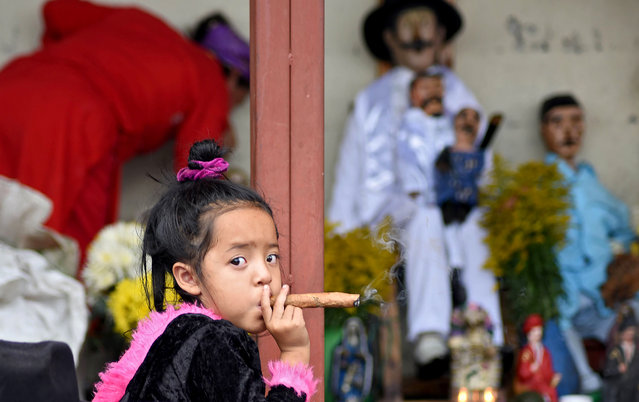 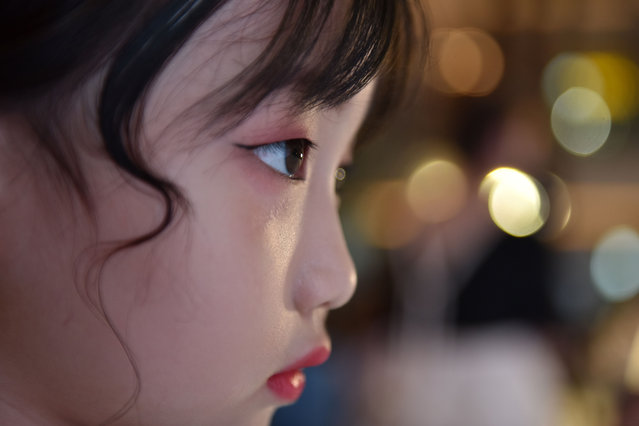 This photo taken on May 26, 2019 shows a child model waiting to take the stage at a child model contest in Beijing. Manicured children strut down the catwalk at a Beijing fashion show, one of thousands of events driving huge demand for child models in China that insiders warn leaves minors vulnerable to physical abuse, 12-hour-days and unrelenting pressure from pushy parents. (Photo by Greg Baker/AFP Photo)
Edit Del
18 Dec 2019 00:01:00, post received 0 comments
Publication archive:
←   →
Popular tags:
All tags
Last searches: