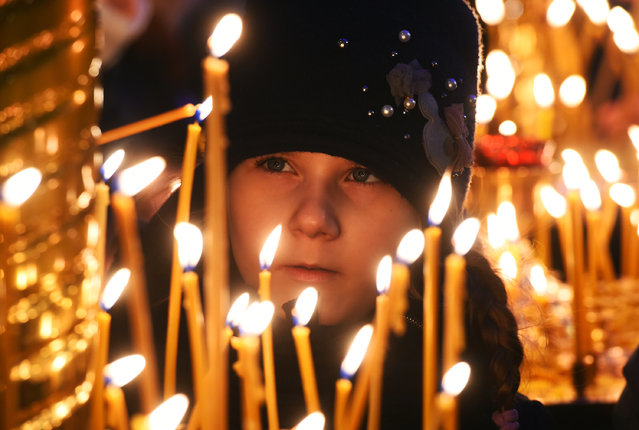 A girl lights a candle during a Christmas service in Kazan Cathedral in central Saint Petersburg, on January 6, 2021. Orthodox Christians celebrate Christmas on January 7 in the Middle East, Russia and other Orthodox churches that use the old Julian calendar instead of the 17th-century Gregorian calendar adopted by Catholics, Protestants, Greek Orthodox and commonly used in secular life around the world. (Photo by Olga Maltseva/AFP Photo) 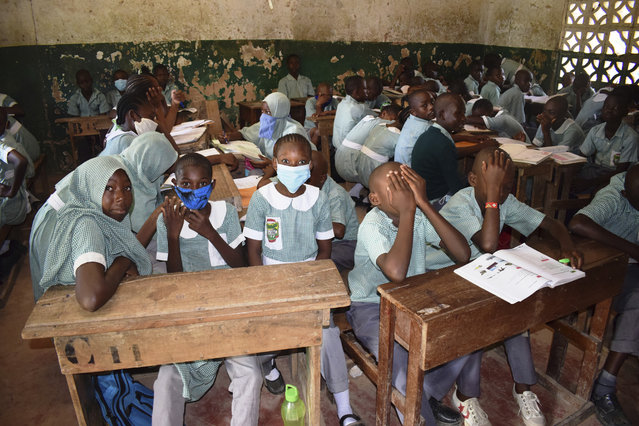 Pupils Concodia Primary school in Mombasa County, Kenya, Monday, January 4, 2021, as schools re-opened after a nine month break due to the COVID-19 pandemic. All Primary and secondary schools in the country were reopened in congested classes despite efforts by the national government to have fulfilled their promises of having new desks and new classes to avoid the social distance calamity which could cause the spread of the pandemic in schools. (Photo by Gideon Maundu/AP Photo) 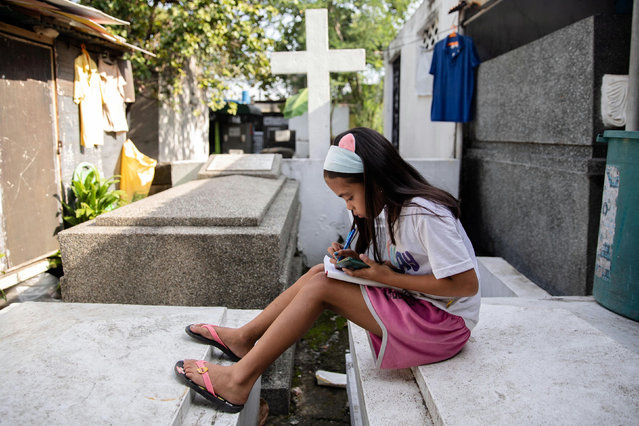 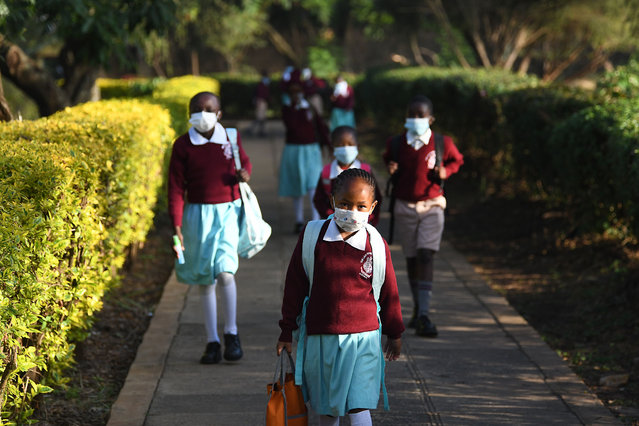 Kenyan school children wear face masks while walking to school as they resume in-class learning after a nine-month disruption caused by the COVID-19 coronavirus pandemic, in Nairobi on January 4, 2021. (Photo by Simon Maina/AFP Photo) 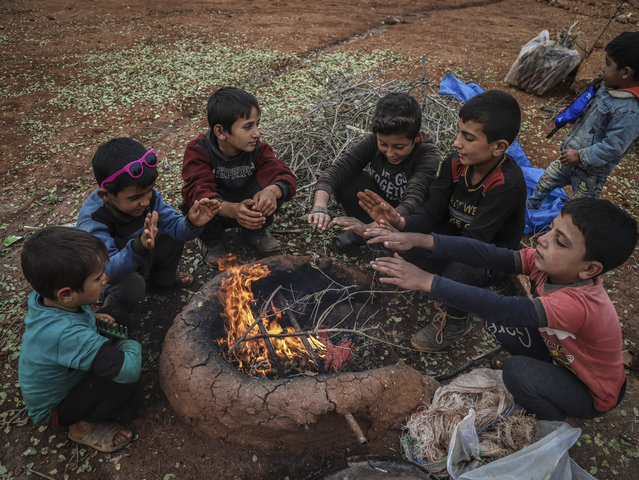 Kids are seen around a tent as Syrians set a fire in a tent by using dangerous materials to keep the family members warm due to cold winter conditions at a refugee camp in Idlib, Syria on January 11, 2021. Syrians have no other options to burn in tents apart from clothes, plastic wastes and other materials which jeopardize their health by causing mainly asthma, bronchitis and other disease in order to keep the families warm amid cold weather. (Photo by Muhammed Abdullah/Anadolu Agency via Getty Images) 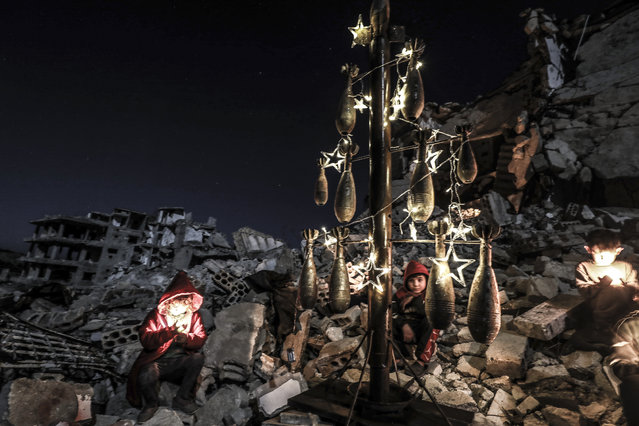 Syrian kids light up rocket projectiles like a new year tree on a debris of a building which was destroyed in bombardments of Assad Regime and its supporter Russia, to draw attention to the destruction of war in Idlib, Syria on December 30, 2020. (Photo by Izzeddin Idilbi/Anadolu Agency via Getty Images) 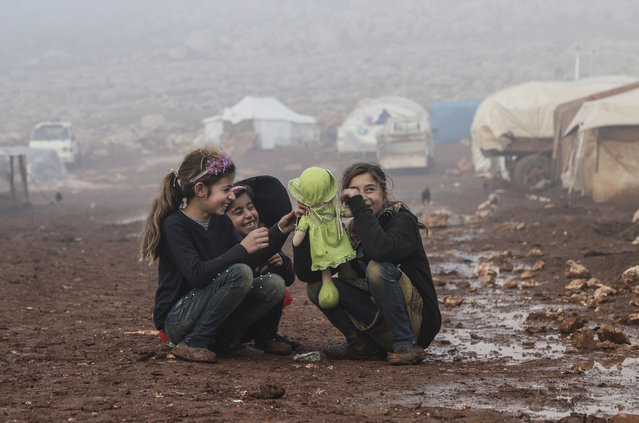 Children play with a doll in the mud at Abu Fida refugee camp in Idlib, Syria on January 6, 2021. (Photo by Ahmet Karaahmet/Anadolu Agency via Getty Images) 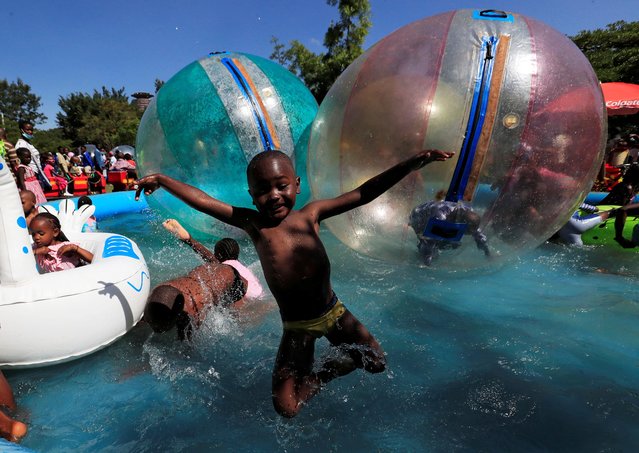 A child jumps in the portable swimming pool at the Uhuru Park grounds for Christmas Day celebrations in Nairobi, Kenya on December 25, 2020. (Photo by Thomas Mukoya/Reuters) 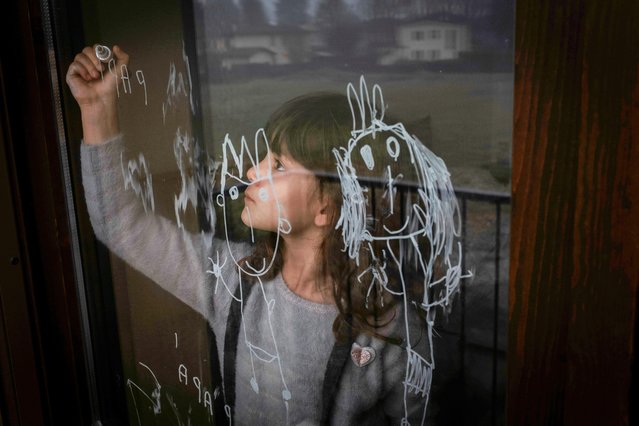 Bianca Toniolo draws on her bedroom's window on Christmas Eve in San Fiorano, Italy, December 24, 2020. Her father Marzio Toniolo has been documenting what life has been like for the small cluster of northern Italian towns since they were put on lockdown due to the coronavirus outbreak weeks before the rest of the country. (Photo by Marzio Toniolo/Reuters) 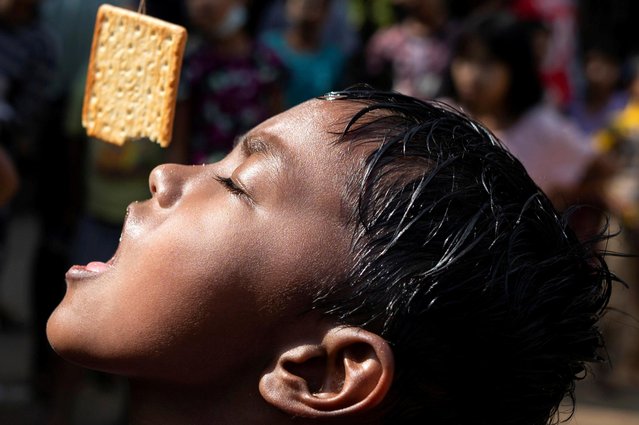 A boy takes part in a snack-eating contest during Myanmar's 73rd Independence Day celebrations amid the spread of the coronavirus disease (COVID-19) in Yangon, Myanmar, January 4, 2021. (Photo by Shwe Paw Mya Tin/Reuters) 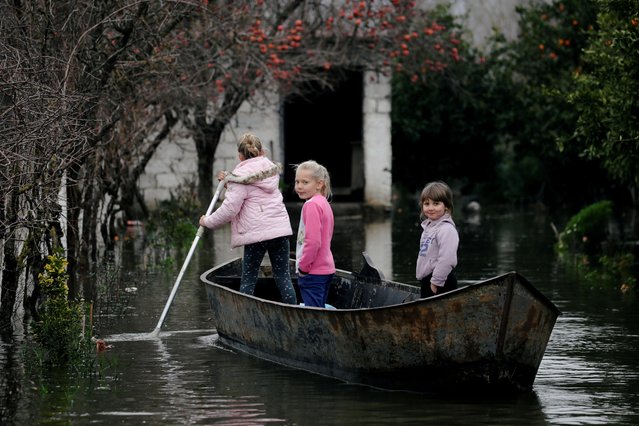 Children use a boat at a flooded area in Obot village, near Shkodra, Albania on January 12, 2021. (Photo by Florion Goga/Reuters) 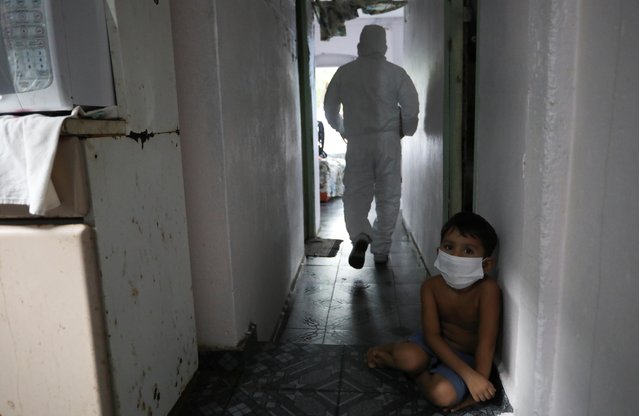 A kid looks on as a municipal healthcare worker walks after examining the body of Shirlene Morais Costa, who died at home at the age of 53 after reporting symptoms consistent with COVID-19 in Manaus, Brazil, January 11, 2021. (Photo by Bruno Kelly/Reuters) 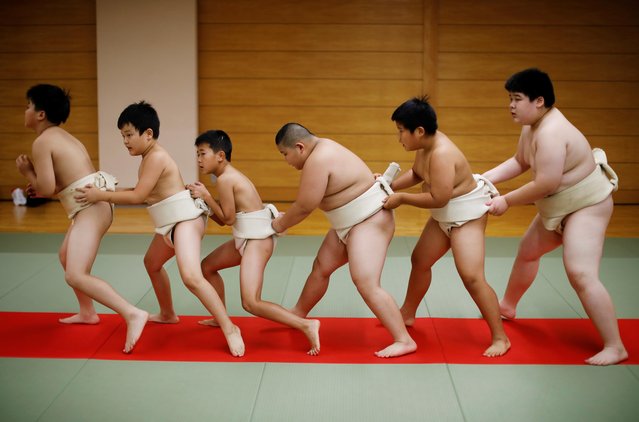 Kyuta Kumagai, 10, warms up with other boys before training, at Komatsuryu sumo club in Tokyo, Japan, August 23, 2020. “It is fun to beat people older than me”, said Kyuta. (Photo by Kim Kyung-Hoon/Reuters) 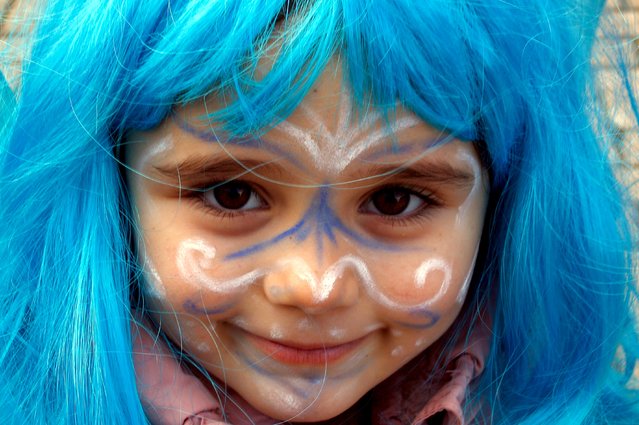 Reveller participates in a parade during a carnival to mark the annual Orthodox St. Vasilij Day, the beginning of the Orthodox New Year, in the village of Vevcani, North Macedonia on January 13, 2021. (Photo by Ognen Teofilovski/Reuters) 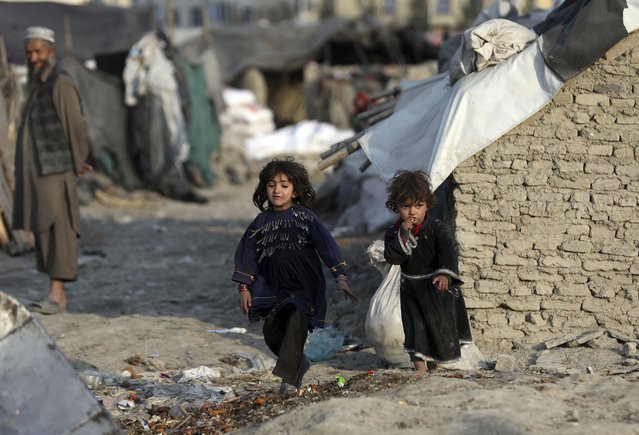 Internally displaced girls play outside their temporary home in the city of Kabul, Afghanistan, Monday, January 18, 2021. Half of war-ravaged Afghanistan’s population is at risk of not having enough food to eat, including around 10 million children, Save the Children, a humanitarian organization said Tuesday. The group called for $3 billion in donations to pay for assistance in 2021. (Photo by Rahmat Gul/AP Photo) 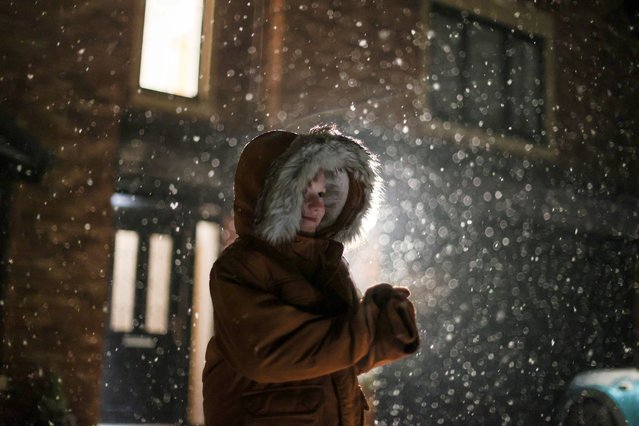 Zac applauds in the snow during the Clap for Heroes campaign, outside his house in Keele, Staffordshire, Britain on January 7, 2021. (Photo by Carl Recine/Reuters) 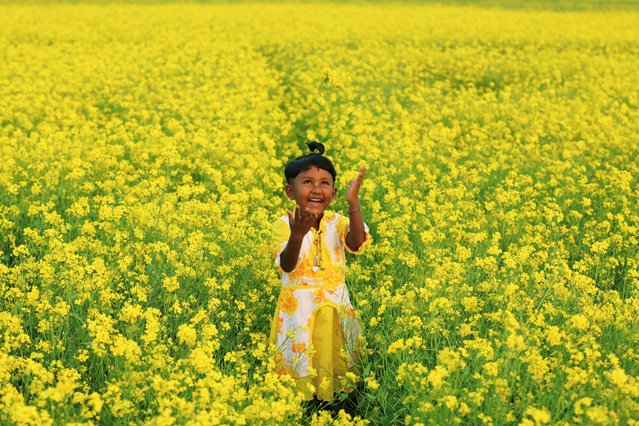 A girl plays in a mustard field in Munshiganj, Bangladesh on January 8, 2021. (Photo by Mohammad Ponir Hossain/Reuters) 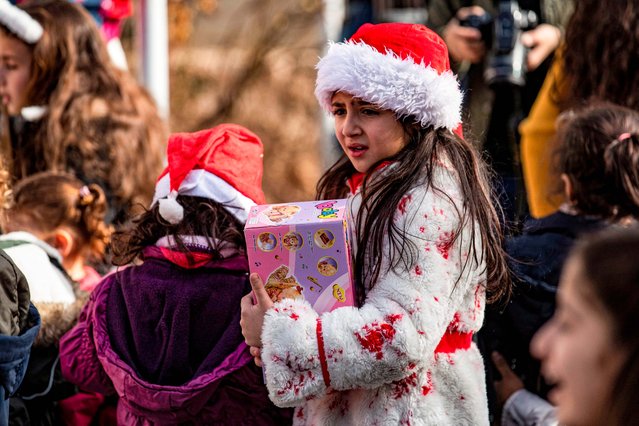 Children attend a Christmas celebration event by Syriac Christians in the town of al-Qahtaniyah in Syria's northeastern Hasakeh province near the Turkish border, on December 29, 2020. (Photo by Delil Souleiman/AFP Photo) 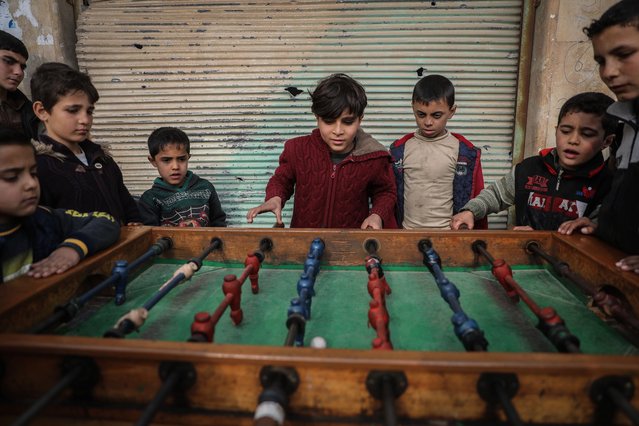 Syrian children play table foosball amongst damaged buildings at the village of Afes, Syria on January 2, 2021. Residents of Afes started returning back to their homes after they were forced into internal displacement due to the intense bombing amid the Syrian Government's military campaign in North-western Syria. (Photo by Anas Alkharboutli/picture alliance via Getty Images) 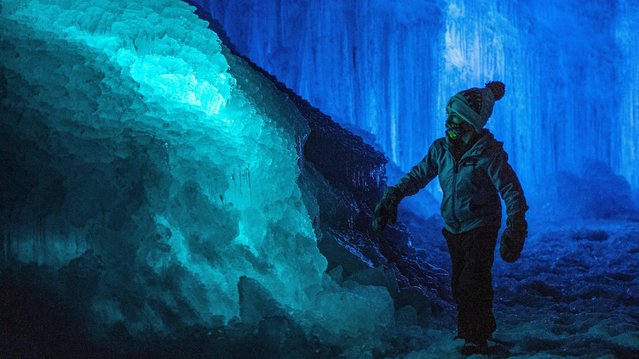