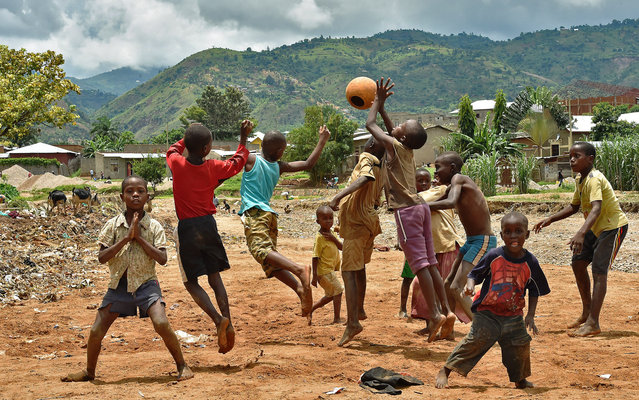 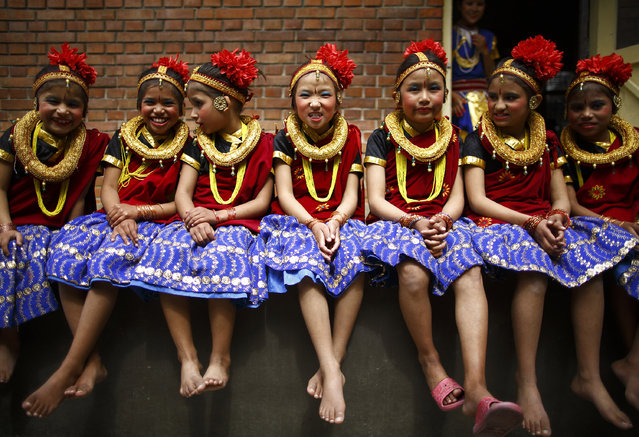 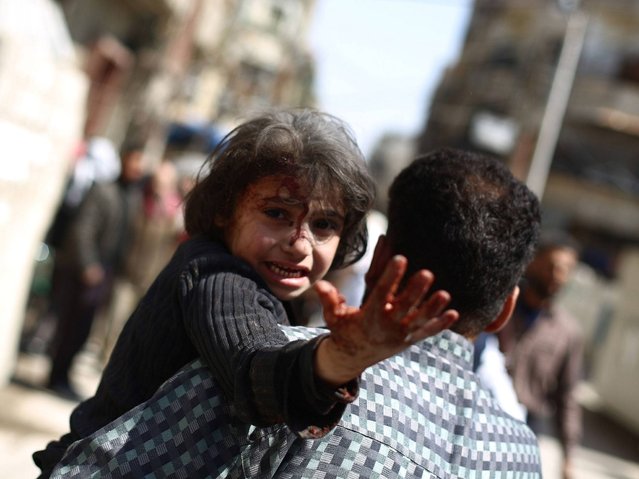 A man carries a wounded child in the rebel-held area of Douma, east of the capital Damascus, following reported air strikes by regime forces on March 15, 2015. (Photo by Abd Doumany/AFP Photo) 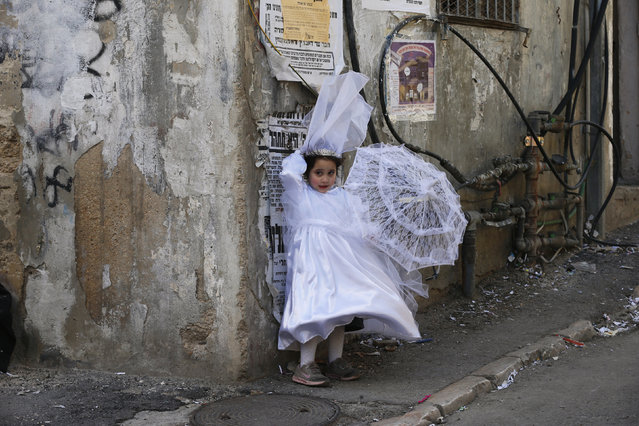 An ultra-Orthodox Jewish girl dressed as a bride stands on a sidewalk during celebrations marking the Jewish holiday of Purim in Jerusalem's Mea Shearim neighbourhood March 6, 2015. Purim is a celebration of the Jews' salvation from genocide in ancient Persia, as recounted in the Book of Esther. (Photo by Ammar Awad/Reuters) 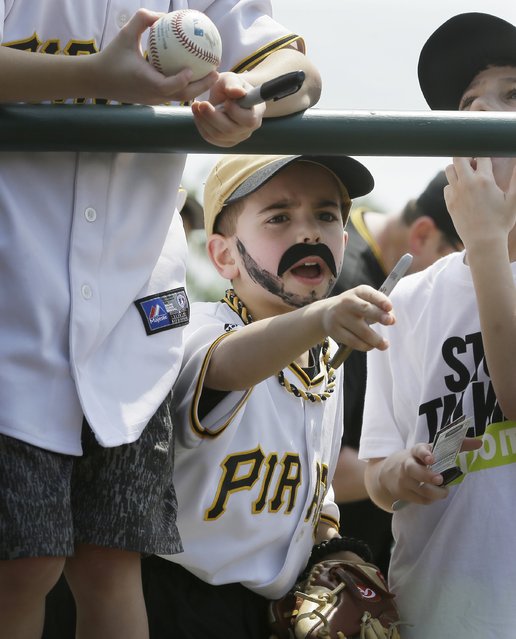 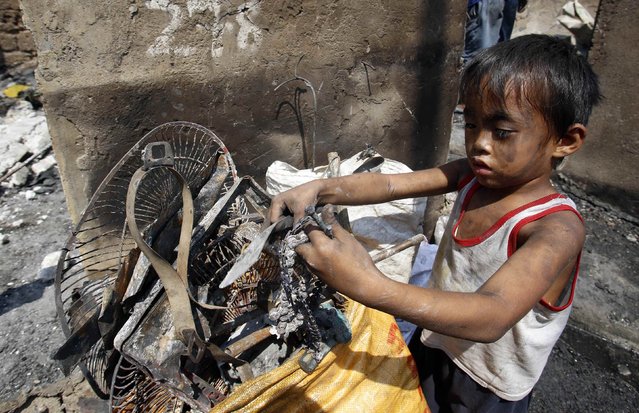 A boy collects recyclable materials recovered from a fire at a residential district in Malabon, Metro Manila March 18, 2015. Two people were killed and 500 families rendered homeless in Malabon on Tuesday after a fire caused by an electrical short circuit in the area broke out, according to local media reports. (Photo by Erik De Castro/Reuters) 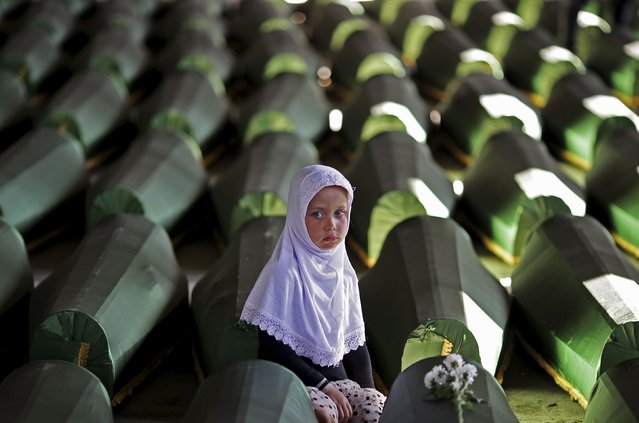 A girl sits next to a coffin of her relative, one of the 173 coffins of newly identified victims from the 1995 Srebrenica massacre, in the Potocari Memorial Center, near Srebrenica in this July 9, 2014 file photo. Serbia arrested seven men on March 18, 2015 suspected of taking part in the 1995 Srebrenica massacre in Bosnia, the first such arrests in the ex-Yugoslav republic of accused gunmen in Europe's worst atrocity since World War Two. The men, arrested in several locations across Serbia, stand accused of executing more than 1,000 Muslim Bosniaks at a warehouse just outside Srebrenica, some of more than 8,000 Muslim men and boys killed in the area after it fell to Bosnian Serb forces in July 1995. (Photo by Dado Ruvic/Reuters) 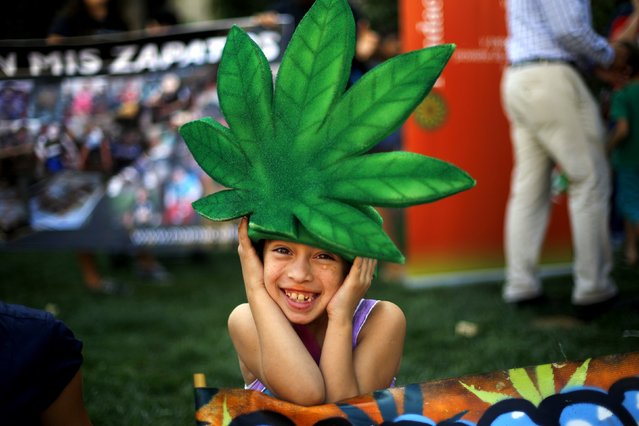 A child wearing a marijuana leaf hat poses during a rally in support of cultivation of cannabis for medicinal purposes in Chile, Santiago March 18, 2015. Several families gathered in front of the government palace in support of the use of the cannabis oil to their children sick with epilepsy, according to the organizers. (Photo by Ivan Alvarado/Reuters) 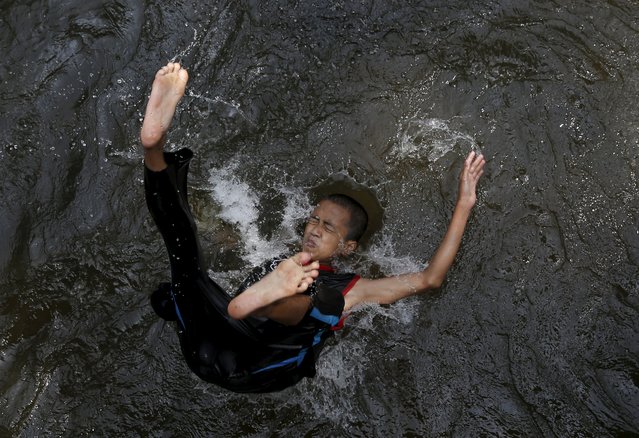 A boy plays in the river during a week-long break from school, outside Kuala Lumpur, March 19, 2015. (Photo by Olivia Harris/Reuters) 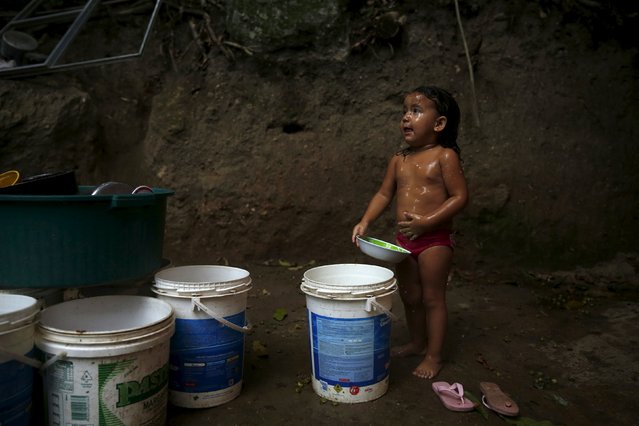 A child takes a bath with buckets of water at her home in the Rocinha slum in Rio de Janeiro, March 19, 2015. The International Water Day is held on March 22. (Photo by Pilar Olivares/Reuters) 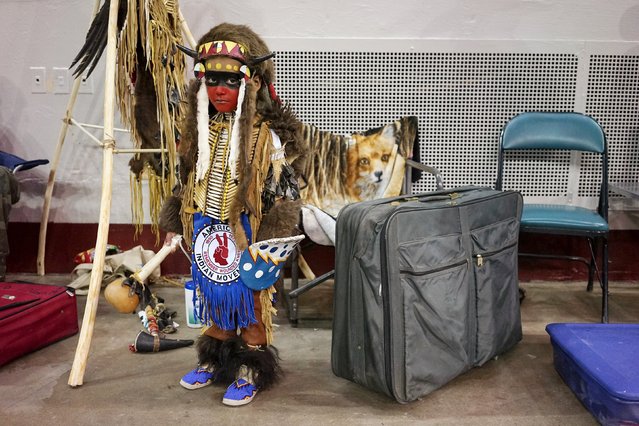 Wechpa Rowland, dressed in a buffalo costume, waits for the Grand Entry at the Denver March Powwow in Denver March 20, 2015. The annual event attracts almost 100 Native American tribes with over 1,000 Indian dancers. (Photo by Rick Wilking/Reuters) 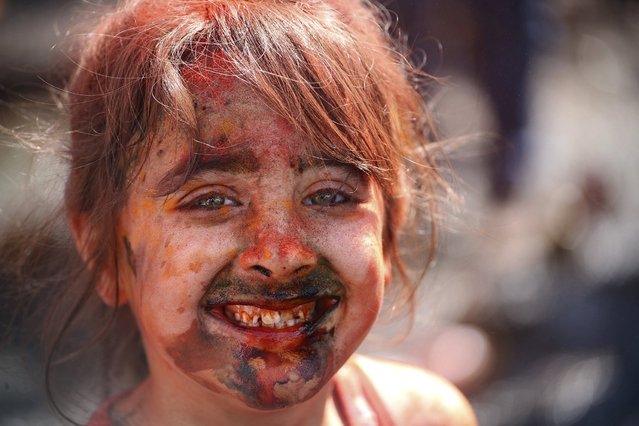 A child covered in coloured powder smiles during a spring festival celebration in Baghdad March 20, 2015. (Photo by Ahmad Mousa/Reuters) 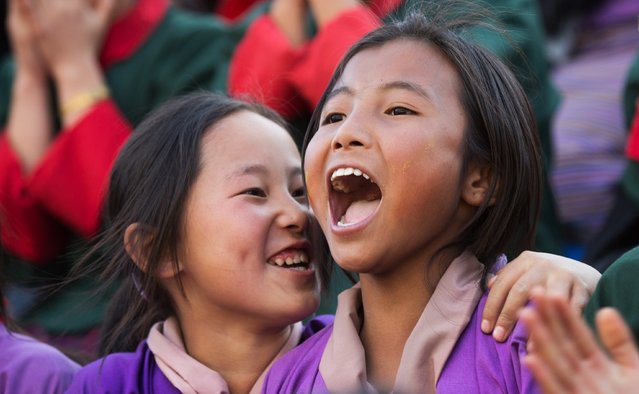 In this photograph taken on March 17, 2015, Bhutanese football fans cheer as they watch the 2018 FIFA World Cup Preliminary Round qualifying match between Bhutan and Sri Lanka in Thimphu. Cheering fans poured onto the streets of Thimphu on March 17 as Bhutan, the world's lowest-ranked football team, pulled off a major shock to reach the second round of World Cup qualifying. Joyous supporters banged drums and chanted “Now we're not the worst team!” after the tiny Himalayan nation, rock-bottom at 209th in the FIFA rankings, stunned Sri Lanka 3-1 on aggregate. (Photo by AFP Photo/Stringer) 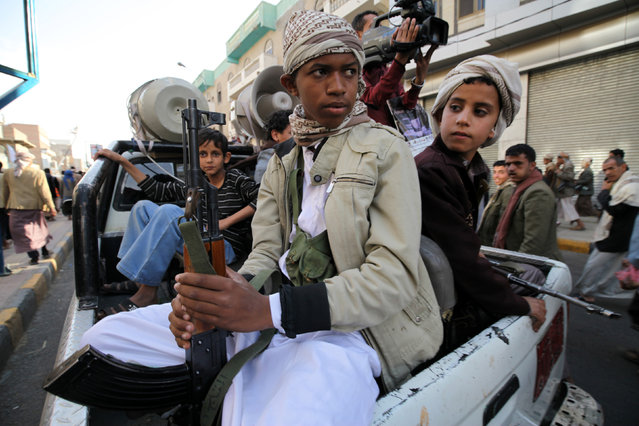 Boys who are part of the Houthi fighters, hold weapons as they ride on the back of a patrol truck during a demonstration to show support to the movement, and rejecting foreign interference in Yemen's internal affairs, in Sanaa March 13, 2015. (Photo by Mohamed al-Sayaghi/Reuters) 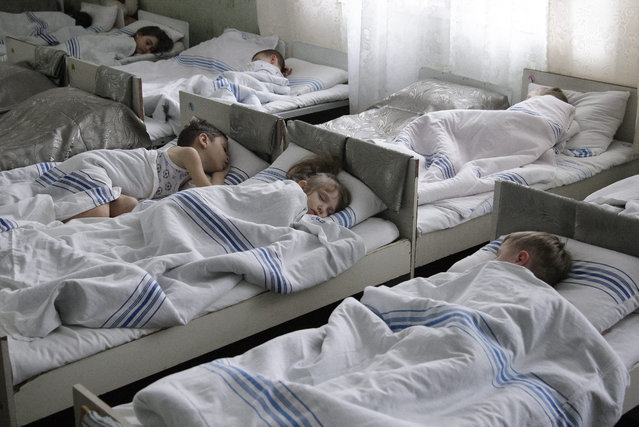 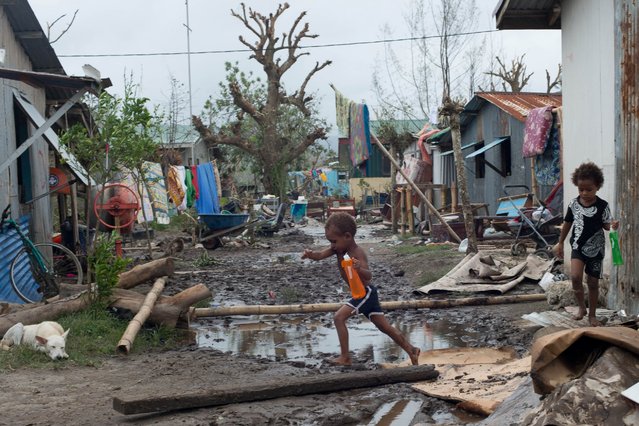 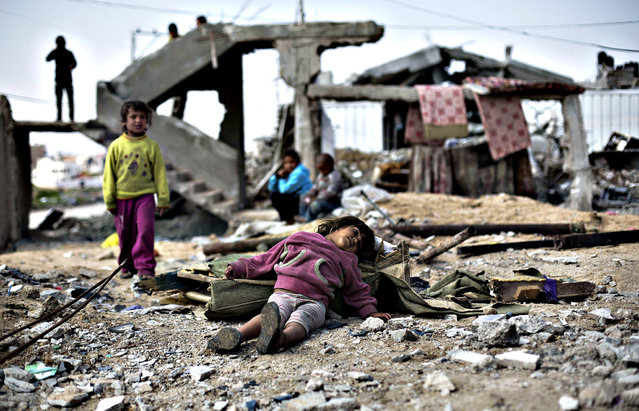 Palestinian children play amidst debris of houses that were destroyed during the 50-day war between Israel and Hamas militants in the summer of 2014, in the Gaza Strip town of Beit Hanun on March 13, 2015. (Photo by Mohammed Abed/AFP Photo) 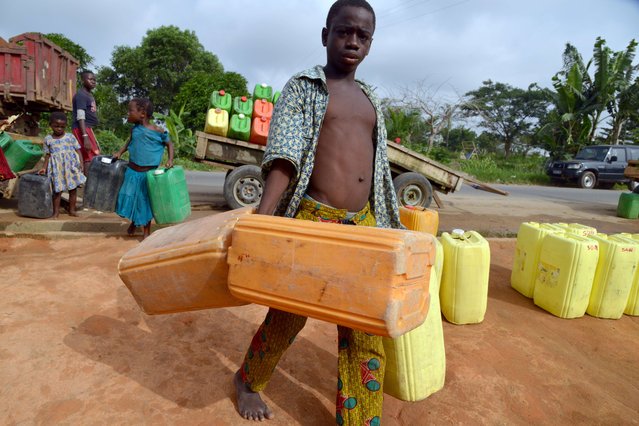 A boy arrives with jerrycans to fetch water in Abobo, a suburb of Abidjan, on March 20, 2015. Without reforms, the world will be plunged into a water crisis that could be crippling for hot, dry countries, the United Nations has warned. (Photo by Issouf Sanogo/AFP Photo) 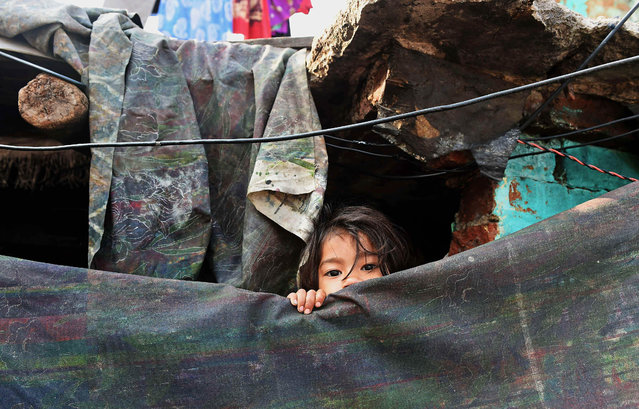