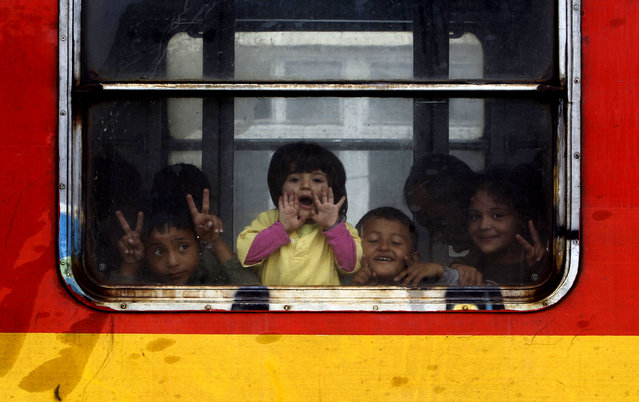 Children migrants look from a window onboard a train departing towards Serbia, at the railway station in the southern Macedonia's town of Gevgelija, on Saturday, August 22, 2015. (Photo by Boris Grdanoski/AP Photo) 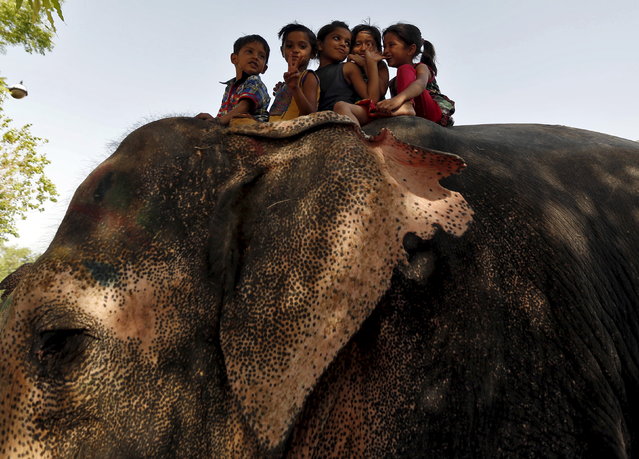 Children gesture as they ride on an elephant outside a temple in the western Indian city of Ahmedabad April 20, 2015. (Photo by Amit Dave/Reuters) 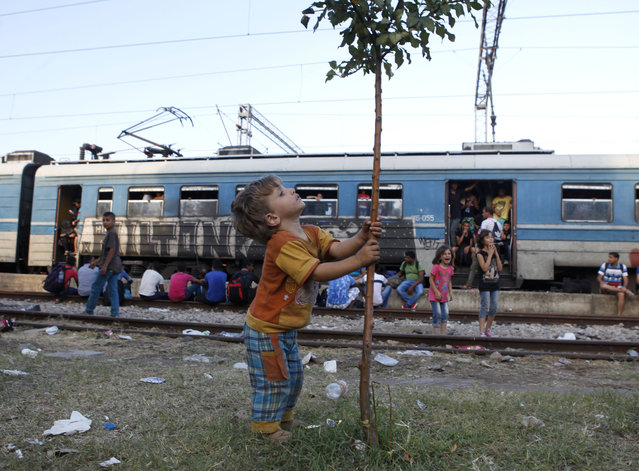 A boy holds a tree, as other migrants wait to depart on a train heading towards Serbia, at the railway station in the southern Macedonian town of Gevgelija, Saturday, August 15, 2015. (Photo by Boris Grdanoski/AP Photo) 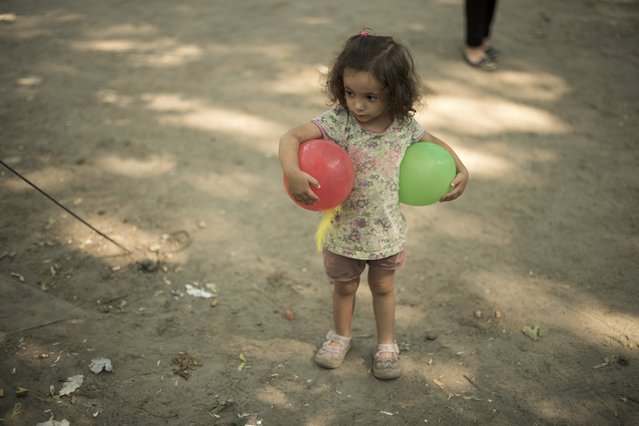 A migrant girl plays with balloons as the newly arrived migrants wait in front of the State Office for Health and Social Affairs to apply for asylum in Berlin, Germany August 11, 2015. (Photo by Stefanie Loos/Reuters) 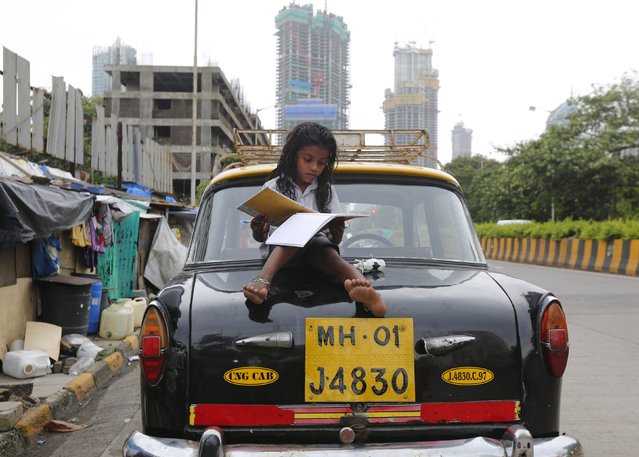 A girl studies while sitting on top of a taxi outside her shanty home at a roadside in Mumbai, India, August 11, 2015. (Photo by Shailesh Andrade/Reuters) 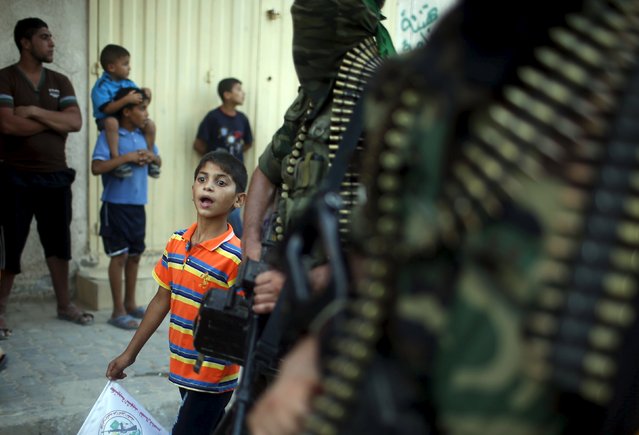 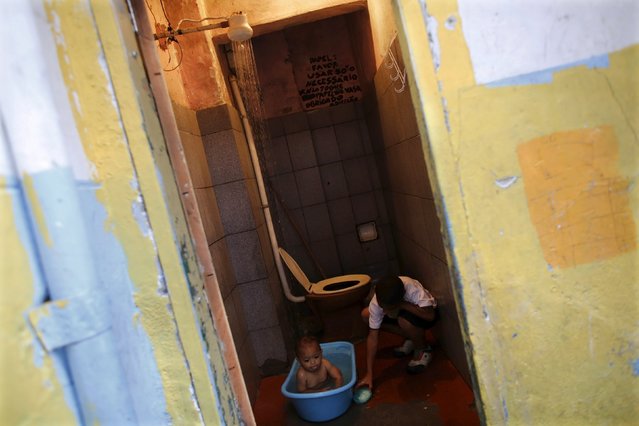 A baby takes a bath as his relative holds a bar of soap as they occupy an empty building in an area of Sao Paulo's Luz neighborhood known to locals as Cracolandia (Crackland), August 12, 2015. (Photo by Nacho Doce/Reuters) 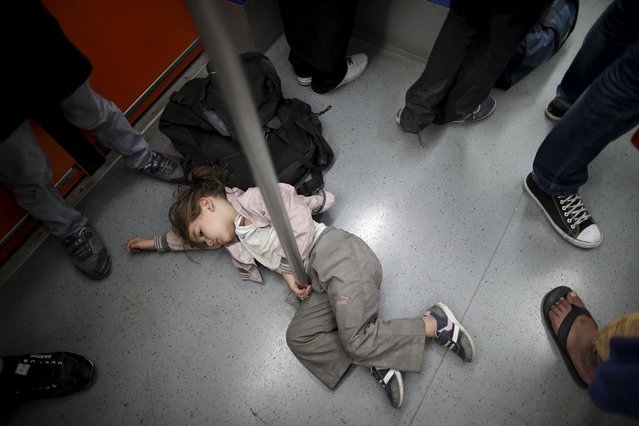 A Syrian refugee girl rests as she rides a Metro with relatives to central Athens after disembarking from a Greek ferry arriving from the island of Kos in the port of Piraeus, Greece, August 15, 2015. (Photo by Christian Hartmann/Reuters) 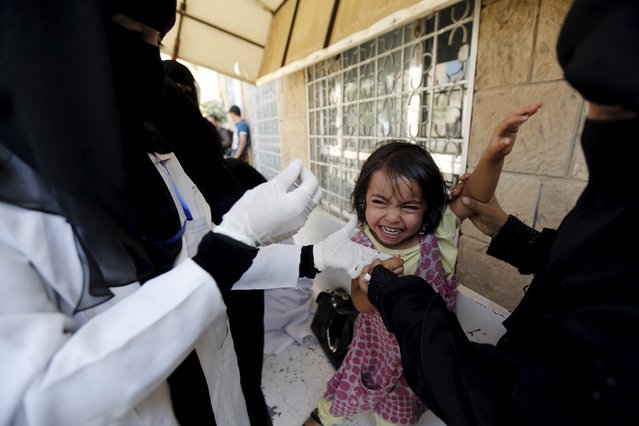 A girl cries as she receives polio vaccine drops at a school in Sanaa sheltering people after conflict forced them to flee their homes in Yemen's Houthi-controlled northern province of Saada August 15, 2015. (Photo by Khaled Abdullah/Reuters) 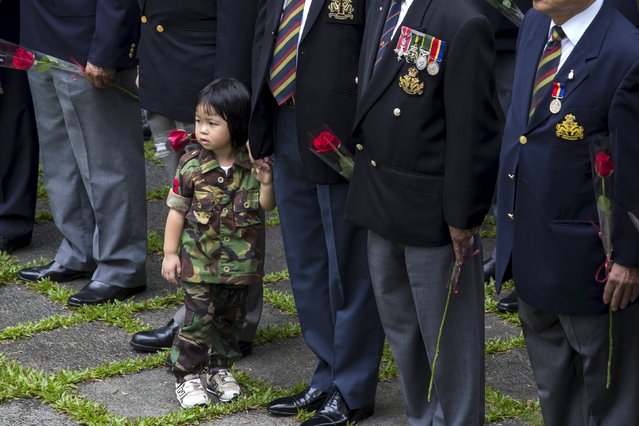 A girl from Hong Kong Adventure Corps attends a ceremony to commemorate the 70th anniversary of Victory over Japan (VJ) Day in Hong Kong, China August 16, 2015. (Photo by Tyrone Siu/Reuters) 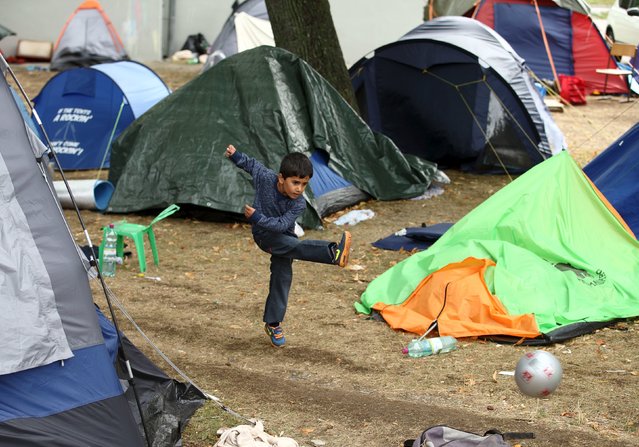 A refugee child plays with a ball inside the asylum processing centre in Traiskirchen, Austria, August 17, 2015. Austria's treatment of asylum seekers at the centre near Vienna is “scandalous”, Amnesty International said on Friday, accusing the country of neglecting homeless and hungry migrants who are flocking in record numbers to western Europe. (Photo by Heinz-Peter Bader/Reuters) 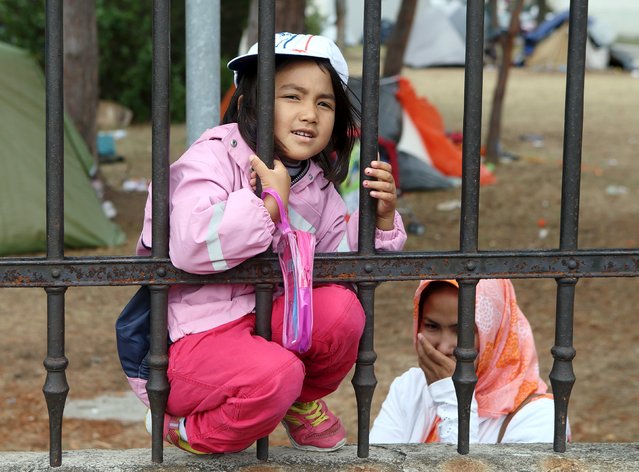 Refugees look through the fence around the asylum processing centre in Traiskirchen, Austria, August 17, 2015. (Photo by Heinz-Peter Bader/Reuters) 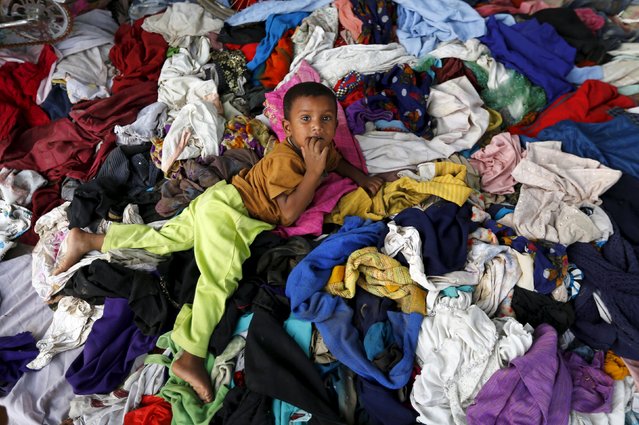 A girl plays on clothes donated by local people for charity outside her makeshift home in New Delhi, India, August 17, 2015. (Photo by Adnan Abidi/Reuters) 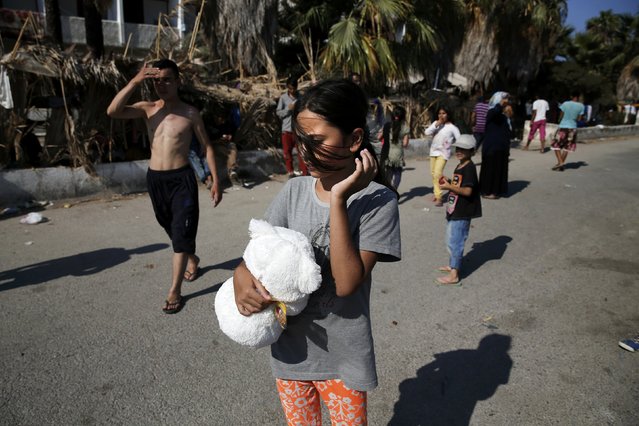 A young migrant girl holds a teddy bear offered by volunteers of the organisation “Solidarity Kos” outside Captain Elias, a derelict hotel where migrants find shelter on the Greek island of Kos, August 17, 2015. Nearly a quarter of a million migrants have crossed the Mediterranean to Europe this year, according to the International Organisation for Migration, with numbers surging in the summer when calmer weather makes the voyage marginally less risky. (Photo by Alkis Konstantinidis/Reuters) 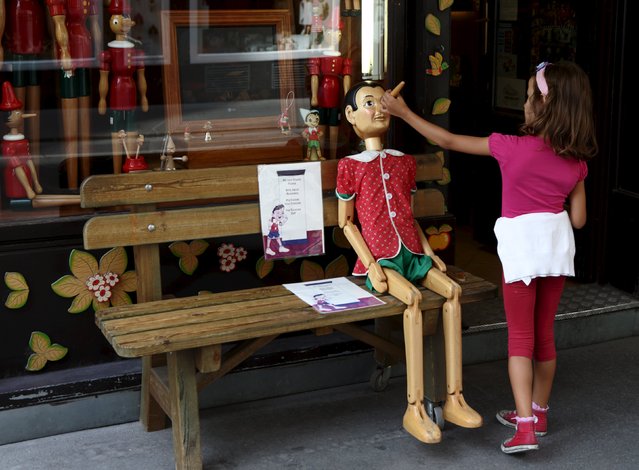 A child touches the nose of a Pinocchio puppet, a fictional character of a popular children's novel, at a woodwork souvenir shop in Vienna, Austria, August 21, 2015. (Photo by Heinz-Peter Bader/Reuters) 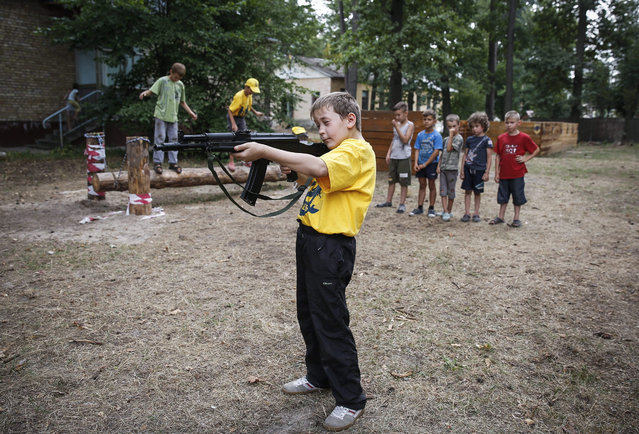 A boy with a mock weapon attends training in the youth military-patriotic summer camp “Azovets” on the outskirts of Kiev, Ukraine, 12 August 2015. The youth military-patriotic summer camp “Azovets” was organized by volunteers battalion Azov for children whose parents are in the eastern Ukrainian conflict zone and for other children from Kiev. Children learn about the military, self-defense and survival skills as well as practice sports. (Photo by Roman Pilipey/EPA) 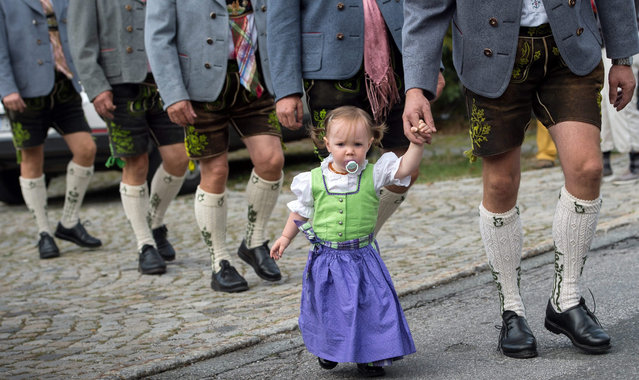 One and a half year old Maria, wearing a traditional Dirndl dress, walks with her father during the Assumption Day procession in Kochel am See, Germany, 15 August 2015. In Christian belief, Asssumption Day celebrates the end of Virgin Mary's earthly life and her assumption to heaven. (Photo by Peter Kneffel/EPA) 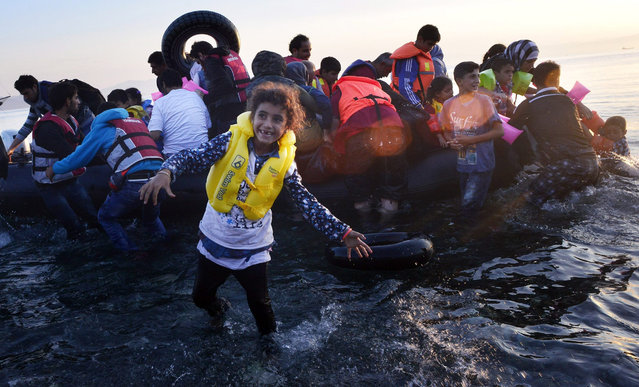 A Syrian child smiles as refugees arrive at a beach on the Greek island of Kos after crossing a part of the Aegean sea from Turkey to Greece in a dinghy on August 15, 2015 in Kos, Greece. The Greek government has sent a cruise ship to the island of Kos which will be able to house up to 2,500 refugees and operate as a registration centre, after 2,000 Syrian refugees were locked in an old stadium during a registration process and left without water for more than a day. (Photo by Milos Bicanski/Getty Images) 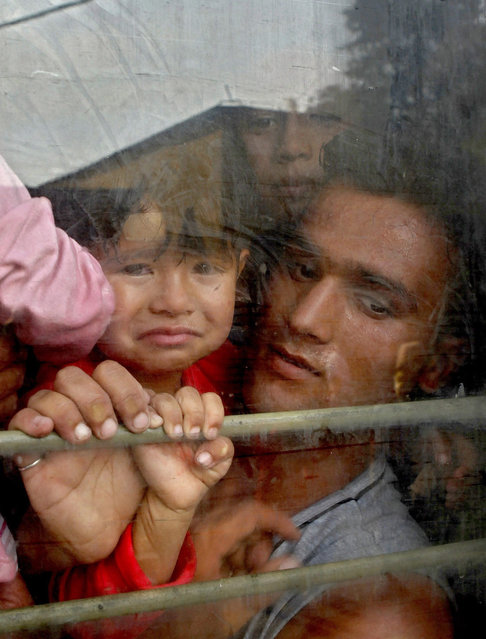 Migrants look out of a window onboard a crowded train taking them towards Serbia, at the railway station in the southern Macedonian town of Gevgelija, on Sunday, August 16, 2015. (Photo by Boris Grdanoski/AP Photo) 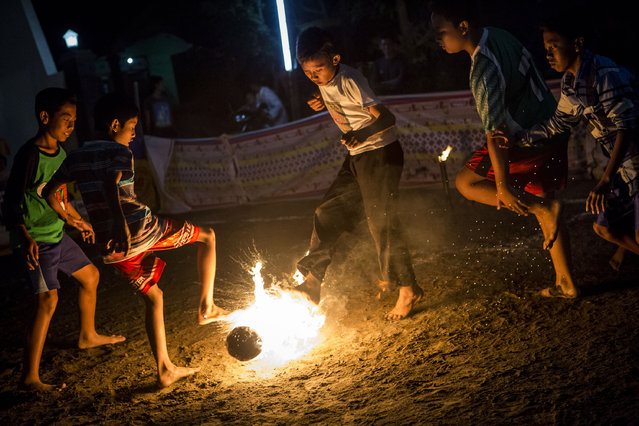 Children play a game of fire football, known as “bola api”, a coconut is soaked in kerosene and set on fire during celebrations of Indonesia's National Independence Day on August 15, 2015 in Yogyakarta, Indonesia. (Photo by Ulet Ifansasti/Getty Images) 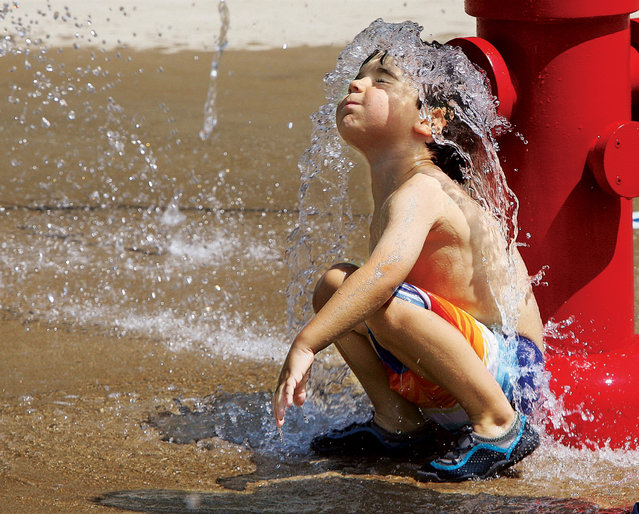 Adrian Sova, 4, squats down in front of the replica fire hydrant in the Splashpark to take the plunge on one of the last days of summer vacation in Hartford, Ill., Monday August 17, 2015. (Photo by John Badman/The Telegraph via AP Photo) 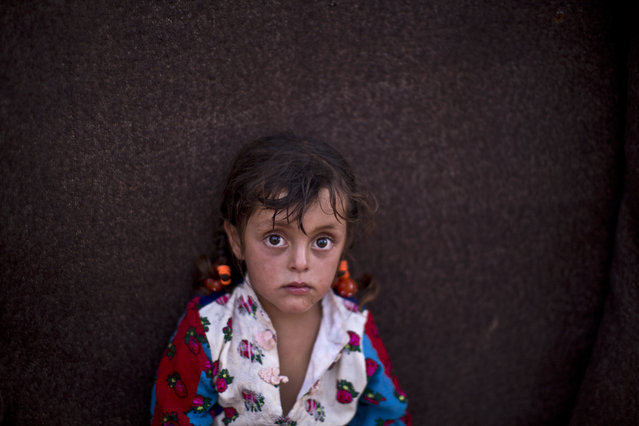 Syrian refugee girl Zahra Mahmoud, 4, sits in front of her family's makeshift tent at an informal tented settlement near the Syrian border on the outskirts of Mafraq, Jordan, Wednesday, August 19, 2015. (Photo by Muhammed Muheisen/AP Photo) 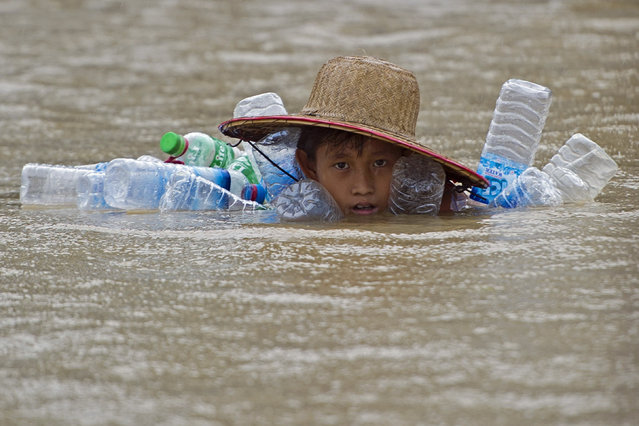 A flood-affected resident swims in floodwaters at Kyaut Ye village near the Hinthada town in Myanmar's Irrawaddy region on August 11, 2015. (Photo by Ye Aung Thu/AFP Photo) 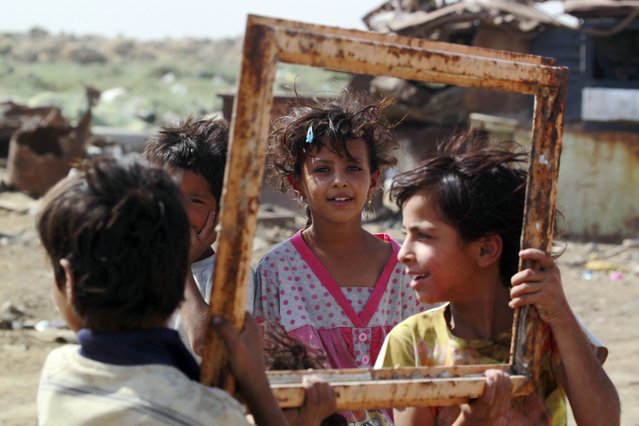 Iraqi children hold an empty frame at a garbage dump where he lives in the Diwaniya village, east of the holy city of Najaf, on August 21, 2015. (Photo by Haidar Hamdani/AFP Photo) 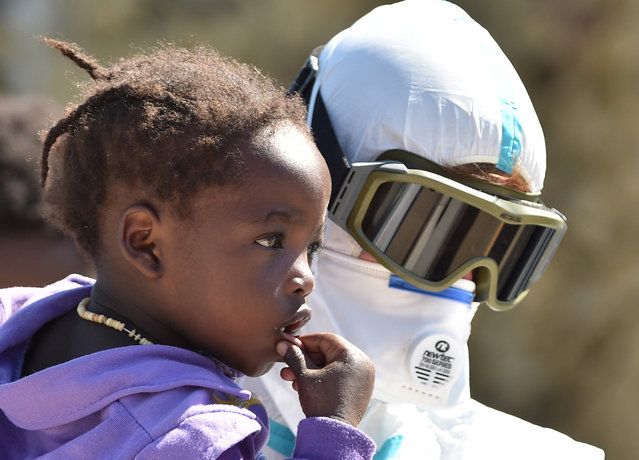 A crew member of the Irish Navy vessel LE Niamh holds a baby, who was rescued together other migrants, as they disembark at the Messina harbor in Sicily, Italy, Monday, August 24, 2015. (Photo by Carmelo Imbesi/AP Photo) 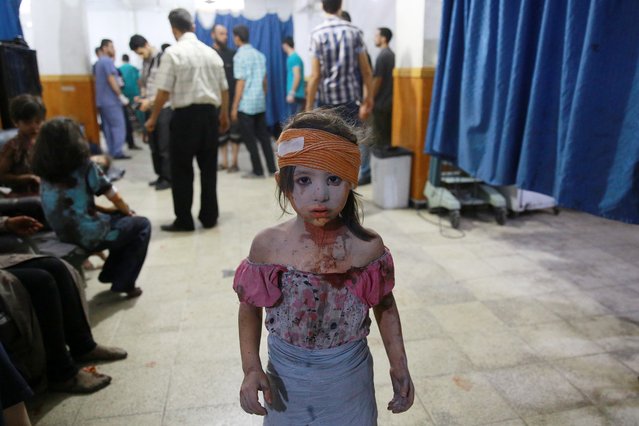 A wounded Syrian girl looks on at a make shift hospital in the rebel-held area of Douma, east of the capital Damascus, following shelling and air raids by Syrian government forces on August 22, 2015. At least 20 civilians and wounded or trapped 200 in Douma, a monitoring group said, just six days after regime air strikes killed more than 100 people and sparked international condemnation of one of the bloodiest government attacks in Syria's war. (Photo by Abd Doumany/AFP Photo)
Edit Del
25 Aug 2015 10:52:00, post received 0 comments
Publication archive:
←   →
Popular tags:
All tags
Last searches: