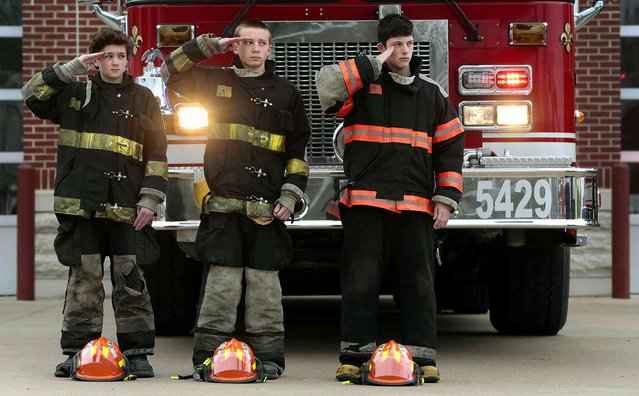 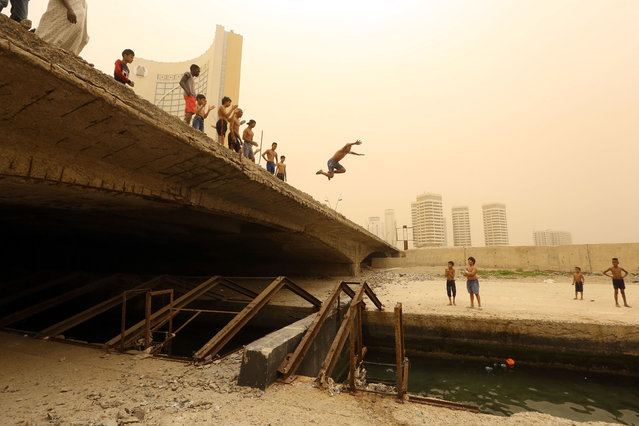 Libyan children play near the port of Tripoli on April 22, 2019. Despite the war on Tripoli's doorstep, residents are filling the salons and cafes in some quarters of the Libyan capital as they carry on with life as best they can. Tension has been high in Tripoli since military chief Khalifa Haftar launched an offensive on April 4, aimed at seizing the capital from the UN-backed unity government based there. (Photo by Mahmud Turkia/AFP Photo) 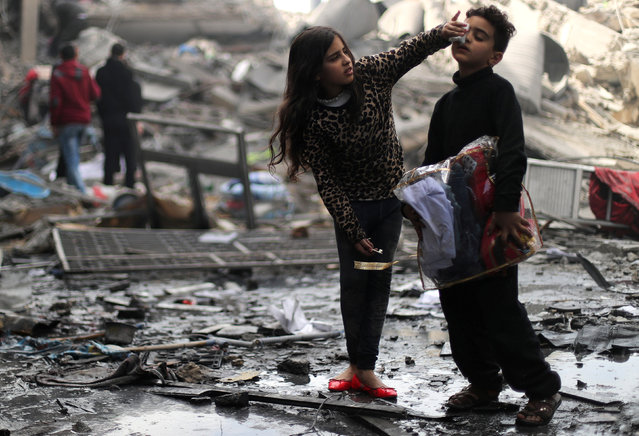 A Palestinian girl cleans the face of her brother outside their destroyed house after an Israeli missile targeted a nearby Hamas site, in Gaza City March 26, 2019. (Photo by Mohammed Salem/Reuters) 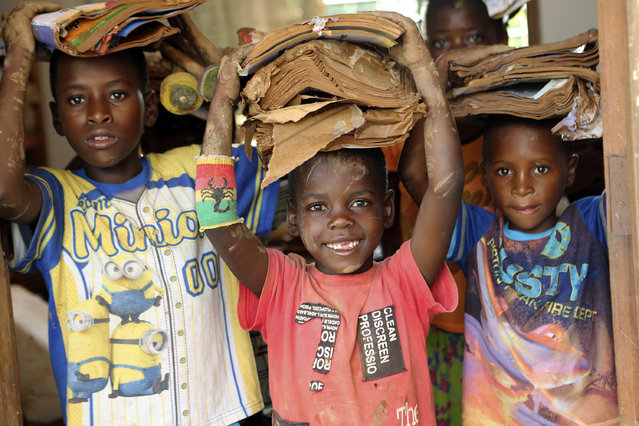 Children carry books damaged by the cyclone at a camp for displaced survivors of cyclone Idai in Dombe, about 280km west of Beira, Mozambique, Thursday, April 4, 2019. The Indian Ocean port of Beira, a city of 500,000, is where most of the more than 1,400 cases of cholera have been reported since the outbreak was declared a week ago in the aftermath of Cyclone Idai. Mozambican authorities have reported two deaths so far from the acute diarrheal disease, which can kill within hours if not properly treated. (Photo by Tsvangirayi Mukwazhi/AP Photo) 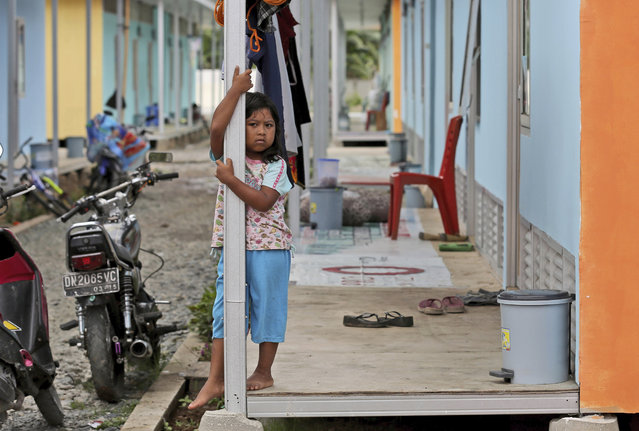 In this Wednesday, April 3, 2019, photo, a young girl pauses as she plays at a temporary housing compound for those affected by the Sept. 28, 2018, earthquake, in Palu, Central Sulawesi, Indonesia. The earthquake spawned a large localized tsunami that wiped out coastal areas, while liquefaction caused by the shaking turned entire neighborhoods into rivers of sludge. The disaster killed thousands of people, making it the world’s deadliest seismic event in 2018. (Photo by Tatan Syuflana/AP Photo) 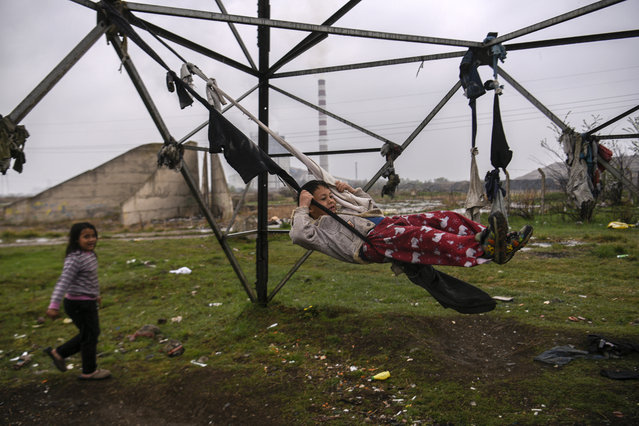 A Roma child swings on tied clothes near his shelter at a Roma Camp in the village of Plemetina, near Pristina on April 8, 2019, during the International Roma Day marked around Europe to celebrate Romani culture and raise awareness of the situation of Roma. (Photo by Armend Nimani/AFP Photo) 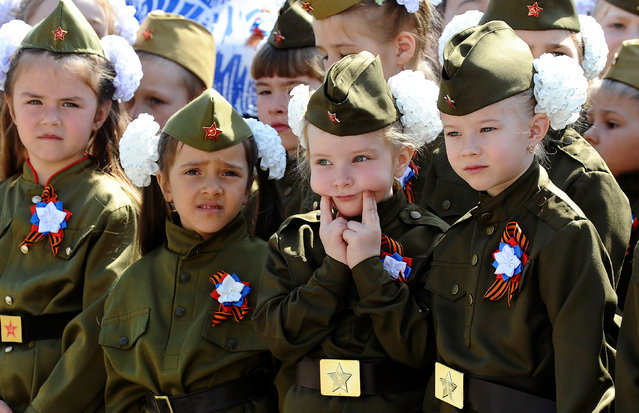 Children wearing military uniform take part in a parade, held by Russian servicemen, pupils of infant and primary schools, which is a public event to honour World War Two veterans and to mark the upcoming Victory Day, in Rostov-on-Don, Russia on April 25, 2019. (Photo by Sergey Pivovarov/Reuters) 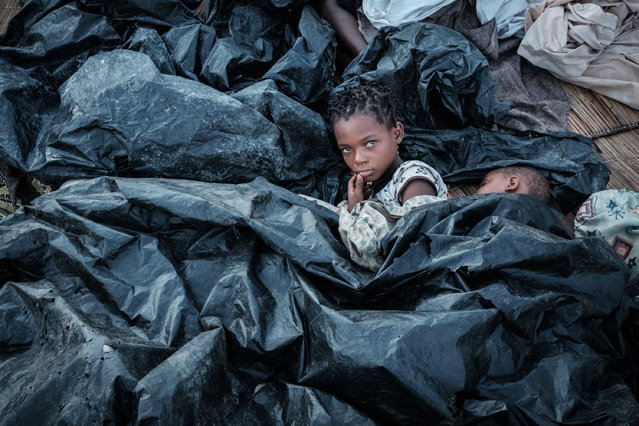 Enia Joaquin Luis, 11, wakes up beside her sister Luisa, 6, under plastic sheets for protect themselves from rain as they stay in shelter at the stands of Ring ground in Buzi, Mozambique, on March 23, 2019. The death toll in Mozambique on March 23, 2019 climbed to 417 after a cyclone pummelled swathes of the southern African country, flooding thousands of square kilometres, as the UN stepped up calls for more help for survivors. Cyclone Idai smashed into the coast of central Mozambique last week, unleashing hurricane-force winds and rains that flooded the hinterland and drenched eastern Zimbabwe leaving a trail of destruction. (Photo by Yasuyoshi Chiba/AFP Photo) 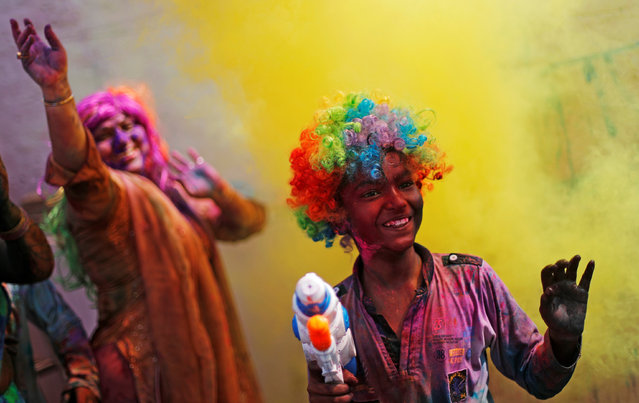 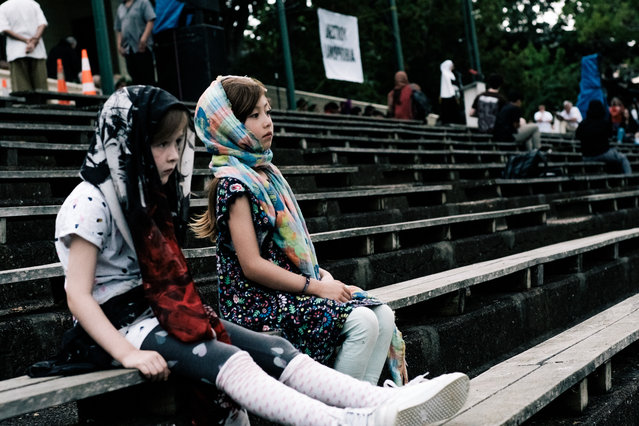 Children attend a vigil for the lives taken in the Christchurch terror attacks at the Auckland Domain on March 22, 2019 in Auckland, New Zealand. 50 people were killed, and dozens were injured in Christchurch on Friday, March 15 when a gunman opened fire at the Al Noor and Linwood mosques. The attack is the worst mass shooting in New Zealand's history. (Photo by Cam McLaren/Getty Images) 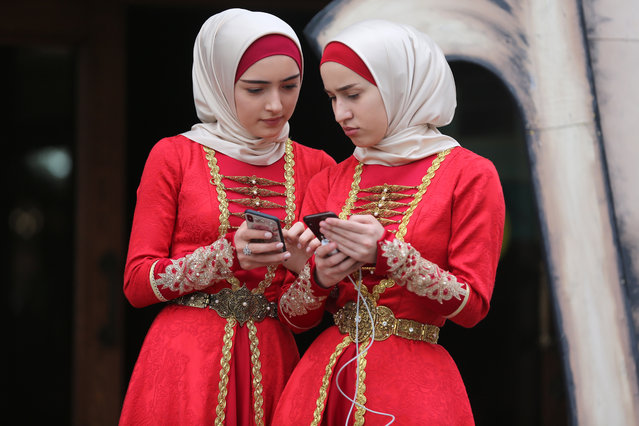 Two girls in traditional costumes during celebrations marking Day of the Chechen Language in Grozny, Chechnya, Russia on April 25, 2019. (Photo by Yelena Afonina/TASS) 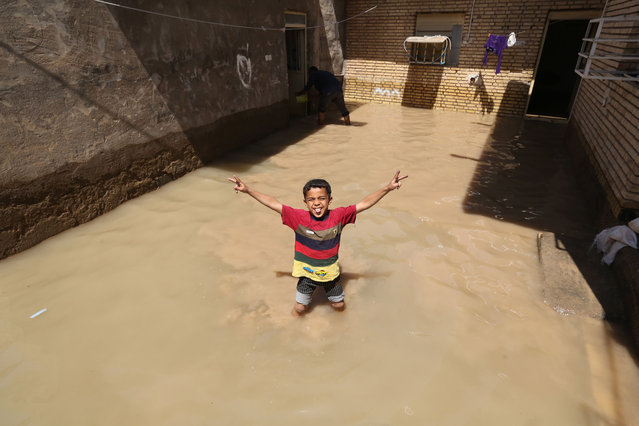 An Iranian child gestures for the camera at a flooded house in the city of Hamidiyeh, in Iran's Khuzestan province, on April 10, 2019. Authorities ordered tens of thousands of residents of the southwestern Iranian city of Ahvaz to evacuate immediately as floodwaters entered the capital of oil-rich Khuzestan province, state television reported. (Photo by Atta Kenare/AFP Photo) 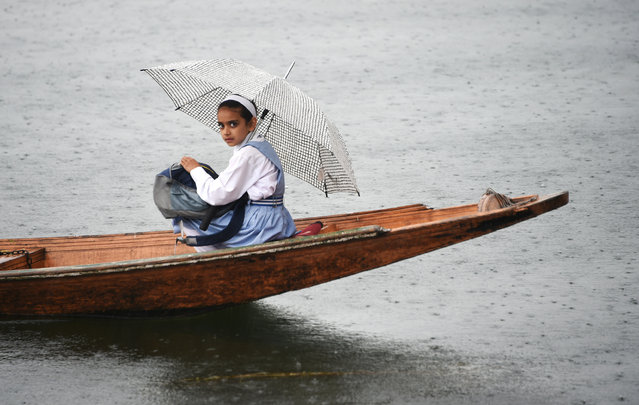 A Kashmiri schoolgirl sits on a boat on Dal Lake as she holds an umbrella during rainfall in Srinagar on April 24, 2019. (Photo by Tauseef Mustafa/AFP Photo) 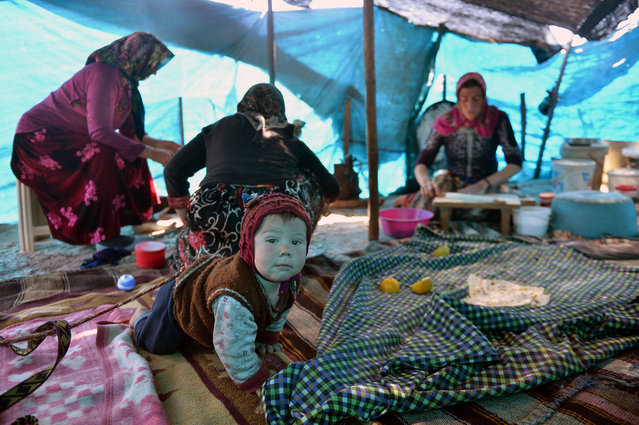 Sarikecili Yoruks, nomadic Turks of Anatolia, are seen at their tents as preparations are made for migration to highlands in Karaman ahead of summer, at Silifke district of Mersin, Turkey on March 26, 2019. Sarikecili Yoruks continuing their lives at tents in a forest near beach in Silifke, not giving up their traditions despite of developing technology. They provide their foods from butternuts and cheese made by their goats' milk. Yoruks, also Yuruks or Yorouks, not only make their bread but also produce agricultural product in tiny fields. (Photo by Sezgin Pancar/Anadolu Agency/Getty Images) 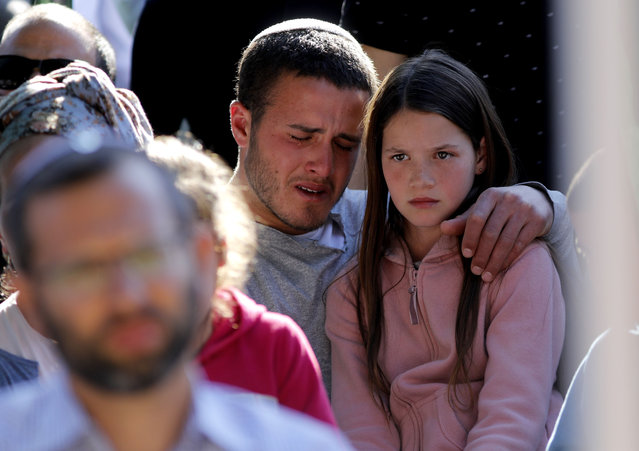 Mourners in the occupied West Bank settlement of Eli, attend the funeral of 47-year-old rabbi Ahiad Ettinger, who died from his injuries sustained a day earlier during a gun and knife attack, on March 18, 2019. Ettinger, wounded in a Palestinian attack that killed an Israeli soldier and injured another one in the occupied West Bank died of his injuries today , his family said. (Photo by Menahem Kahana/AFP Photo) 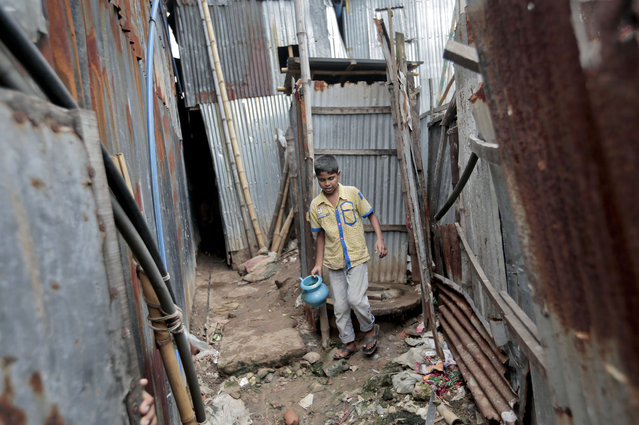 In this June 1, 2016, file photo, a Bangladeshi boy walks out of a toilet at a slum in Dhaka, Bangladesh. A new report by the United Nations children’s agency on Friday, April 5, 2019, says the lives and futures of more than 19 million Bangladeshi children are at risk from colossal impacts of devastating floods, cyclones and other environmental disasters linked to climate change. (Photo by A.M. Ahad/AP Photo/File) 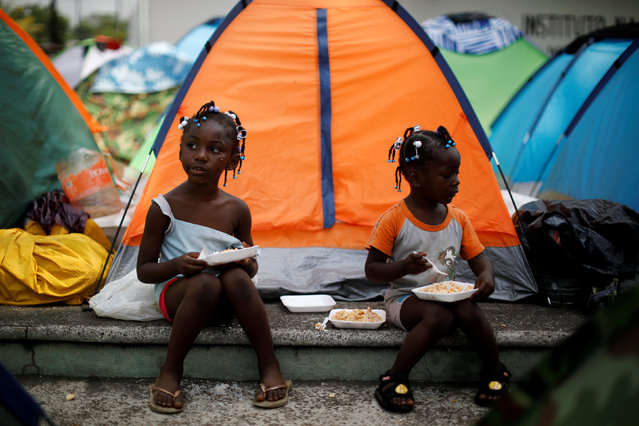 Girls from Congo eat outside their tent at an improvised camp outside the premises of the National Migration Institute (INM), in Tapachula, Mexico April 7, 2019. (Photo by Jose Cabezas/Reuters) 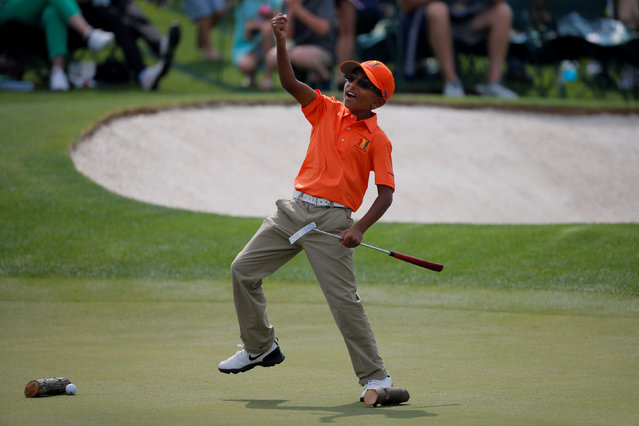 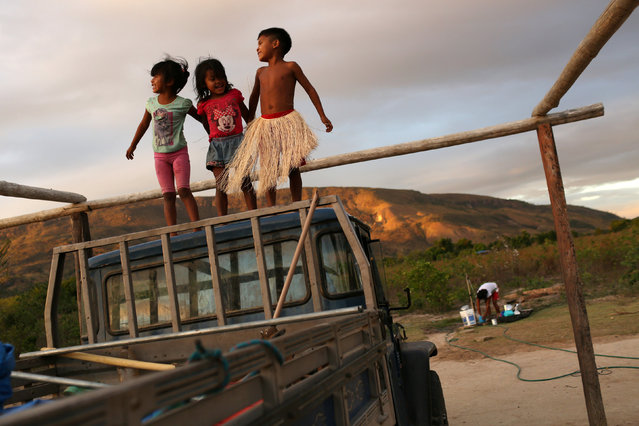 Indigenous Macuxi children play at the community of Maturuca on the Raposa Serra do Sol reservation, Roraima state, Brazil on February 8, 2019. (Photo by Bruno Kelly/Reuters) 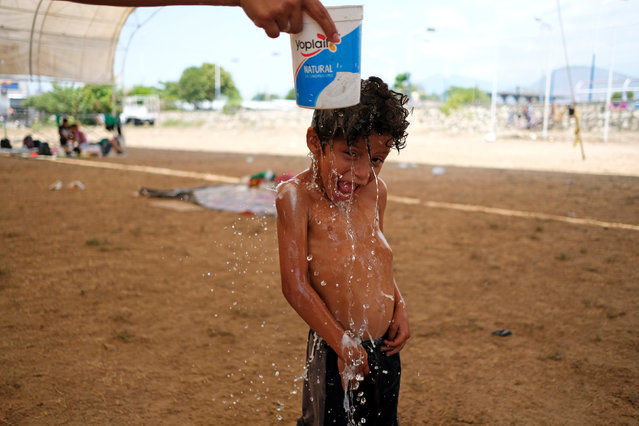 Christian Daniel Gomez from El Salvador gets a bath at an improvised shelter while waiting for his humanitarian visa to cross the country on his way to the United States, in Mapastepec, in Chiapas state, Mexico April 8, 2019. (Photo by Jose Cabezas/Reuters)
Edit Del
27 Apr 2019 00:05:00, post received 0 comments
Publication archive:
←   →
Popular tags:
All tags
Last searches: