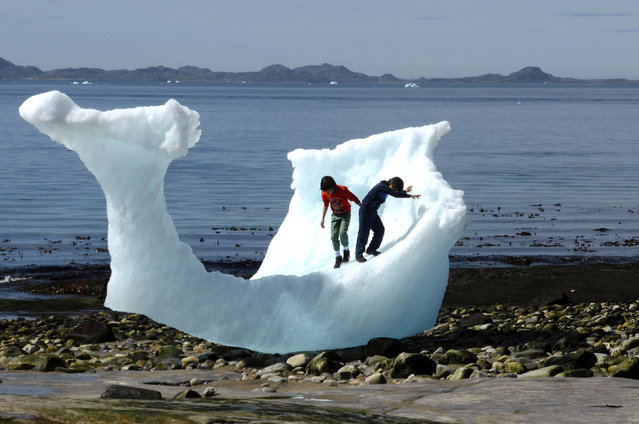 Children play amid icebergs on the beach in Nuuk, Greenland, June 5, 2016. (Photo by Alister Doyle/Reuters) 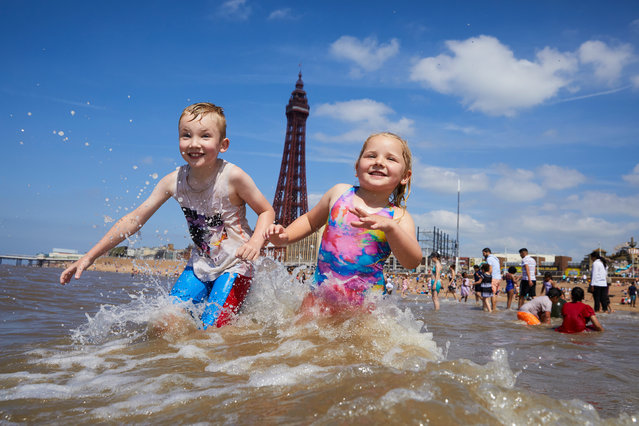 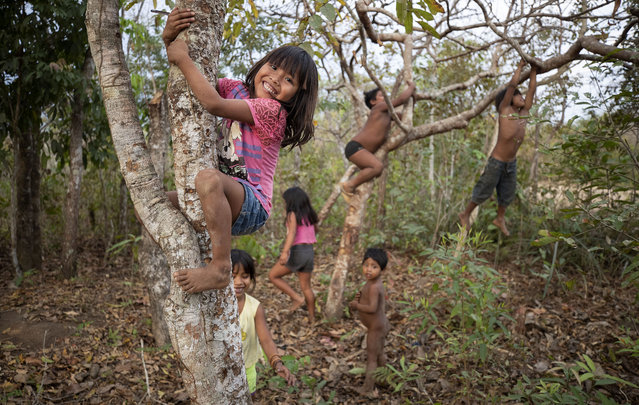 In this August 26, 2019 photo, children of the Nambikwara Sarare tribe climb trees as they play in their indigenous reserve in the southwestern Amazon, near Conquista D'Oeste, in the Brazilian state of Mato Grosso. About 98% of all Brazil’s indigenous lands lie within the Amazon. (Photo by Andre Penner/AP Photo) 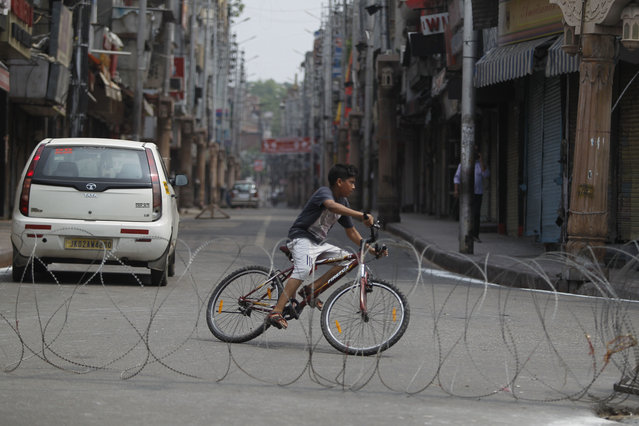 An Indian boy rides a bicycle past a barbed wire erected as part of security restrictions in Jammu, India, Tuesday, Aug.6, 2019. India's lower house of Parliament was set to ratify a bill Tuesday that would downgrade the governance of India-administered, Muslim-majority Kashmir amid an indefinite security lockdown in the disputed Himalayan region. The Hindu nationalist-led government of Prime Minister Narendra Modi moved the “Jammu and Kashmir Reorganization Bill” for a vote by the Lok Sahba a day after the measure was introduced alongside a presidential order dissolving a constitutional provision that gave Kashmiris exclusive, hereditary rights. (Photo by Channi Anand/AP Photo) 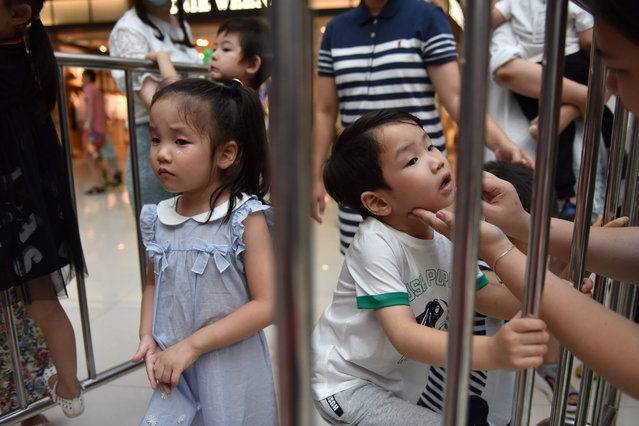 This photo taken on July 14, 2019 shows child models Yumi (L) and Yuki Xiao (R) preparing to take the stage at a child model contest in Beijing. Manicured children strut down the catwalk at a Beijing fashion show, one of thousands of events driving huge demand for child models in China that insiders warn leaves minors vulnerable to physical abuse, 12-hour-days and unrelenting pressure from pushy parents. (Photo by Greg Baker/AFP Photo) Boys dressed in white depicting holy cows participate in a parade to mark Gaijatra Festival, also known as the festival of cows, in Kathmandu, Nepal August 16, 2019. Hindus in Nepal celebrate the festival to ask for salvation and peace for their departed loved ones. Cows are regarded as holy animals in Nepal that help departed souls reach heaven. (Photo by Navesh Chitrakar/Reuters) 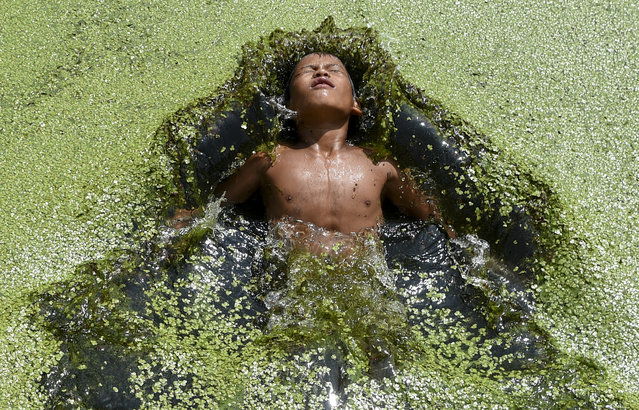 A boy jumps in a pond covered with algae at Kirtipur on the outskirts of Kathmandu, Nepal on August 23, 2019. (Photo by Prakash Mathema/AFP Photo) 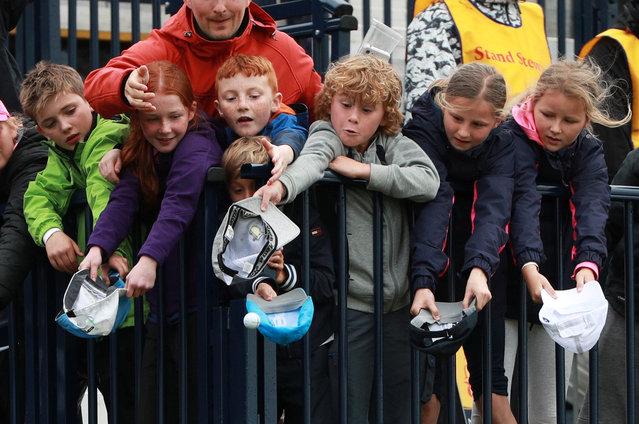 A young fan catches a ball thrown by Republic of Ireland's Padraig Harrington on the 18th during the second round of the British Open golf Championships at Royal Portrush golf club in Northern Ireland on July 19, 2019. (Photo by Ian Walton/Reuters) 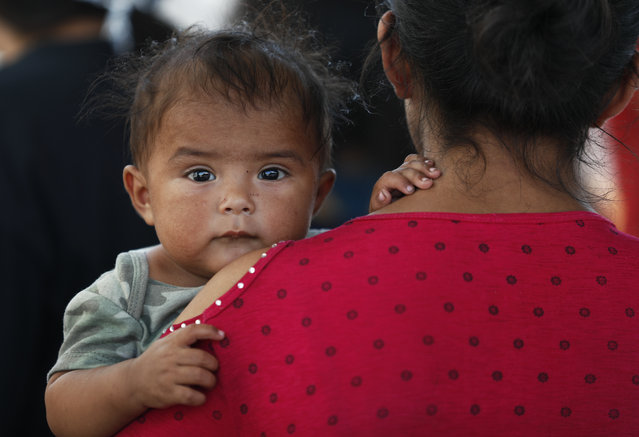 A Honduran migrant mother and her 7-month-old child stand in line to board a bus that will take them and other migrants to Monterrey, from an immigration center in Nuevo Laredo, Mexico, Thursday, July 18, 2019. The migrants have been returned by authorities from the U.S. and are bused to the Mexican city of Monterrey under their own recognizance. (Photo by Marco Ugarte/AP Photo) 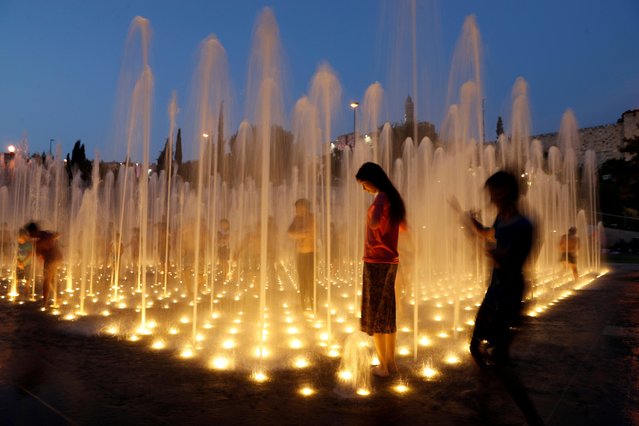 Kids play in a water fountain on a hot day outside the walls of Jerusalem's old city on July 17, 2019. (Photo by Ronen Zvulun/Reuters) 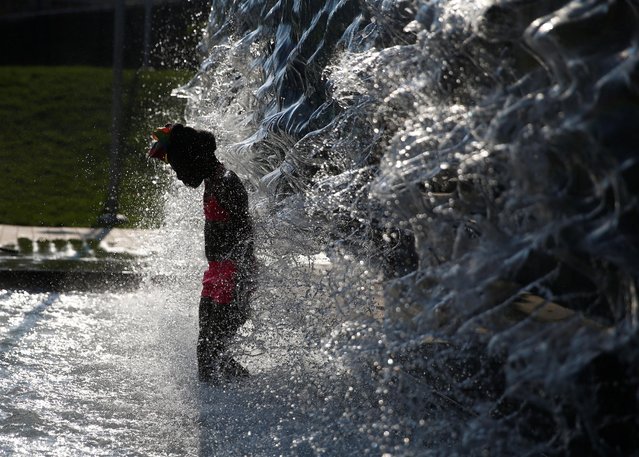 A girl cools off in a water feature in the Navy Yard neighborhood during a heat wave in Washington, U.S., July 20, 2019. (Photo by Eric Thayer/Reuters) 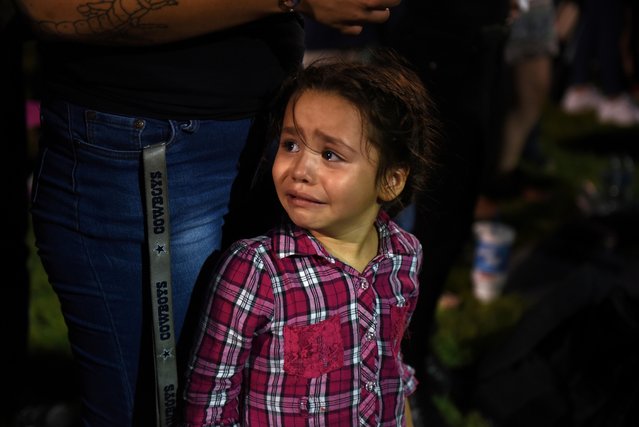 Serenity Lara cries during a vigil a day after a mass shooting at a Walmart store in El Paso, Texas, U.S. August 4, 2019. (Photo by Callaghan O'Hare/Reuters) 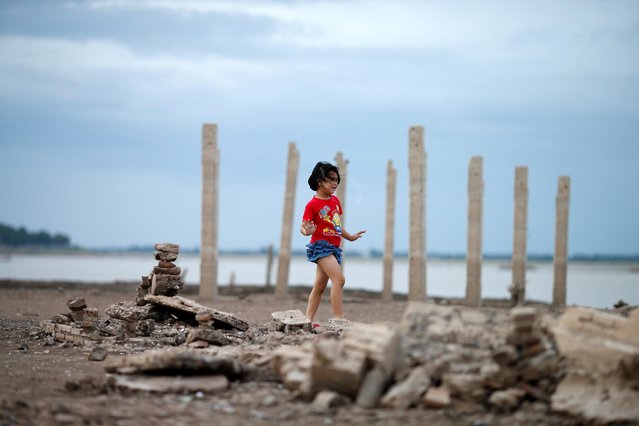 A girl walks through the ruins of a Buddhist temple, which has resurfaced in a dried-up dam due to drought, in Lopburi, Thailand on August 1, 2019. Thousands are flocking to see the Buddhist temple exposed after drought drove water levels to record lows in a dam reservoir where it had been submerged. (Photo by Soe Zeya Tun/Reuters) 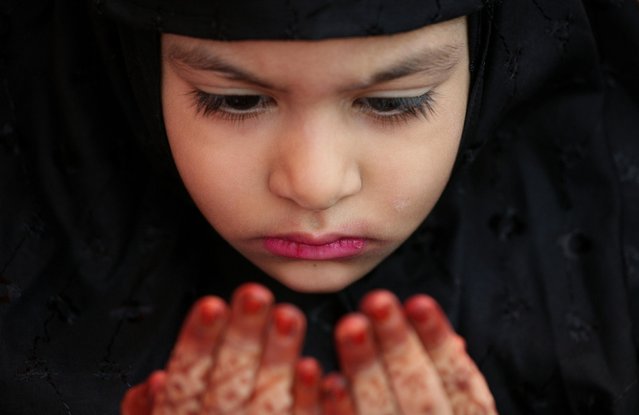 A Muslim girl offers an Eid al-Adha prayer at a mosque in Chennai, August 12, 2019. (Photo by P. Ravikumar/Reuters) 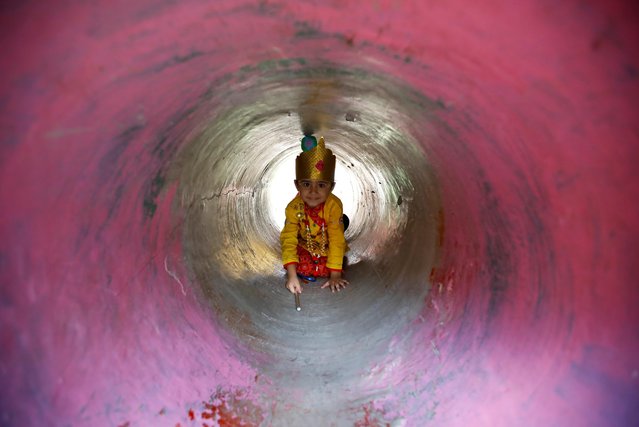 A boy dressed as Lord Krishna plays at the premises of his school during Krishna Janmashtami, or the birth anniversary of Lord Krishna, in Kathmandu, Nepal August 23, 2019. (Photo by Navesh Chitrakar/Reuters) 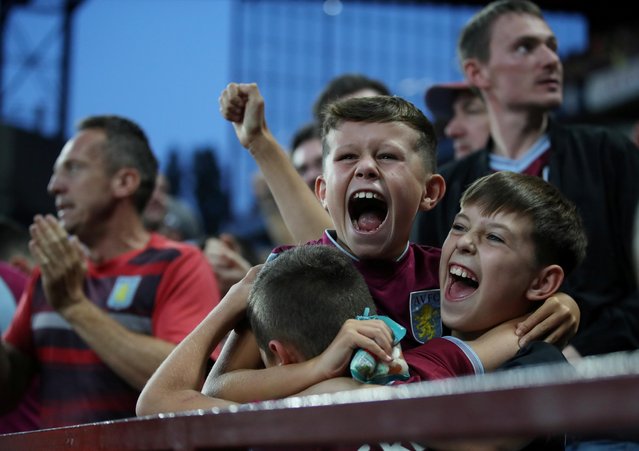 A woman with a girl dip in cold waters of Golubaya Krinitsa, (Blue Spring) during celebration of Orthodox Honey Savior, which is also called the Savior on Water, near the town of Slavgorod, Belarus, August 14, 2019. (Photo by Vasily Fedosenko/Reuters) 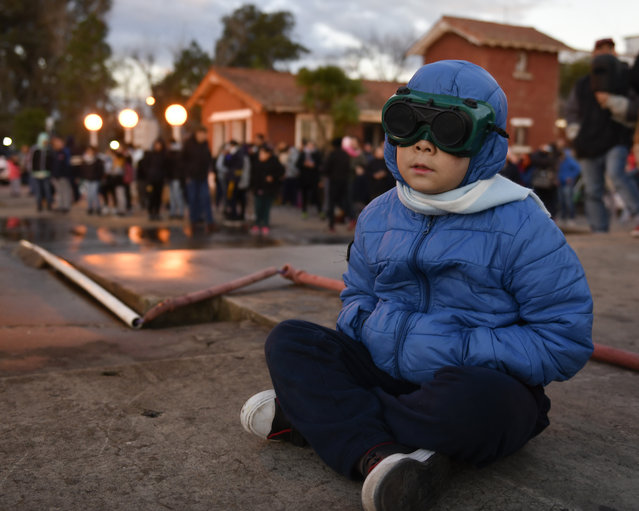 A bundled up youth wears special glasses to watch a total solar eclipse in Chascomus, Argentina, Tuesday, July 2, 2019. A solar eclipse occurs when the moon passes between the Earth and the sun and scores a bull's-eye by completely blocking out the sunlight. (Photo by Gustavo Garello/AP Photo) 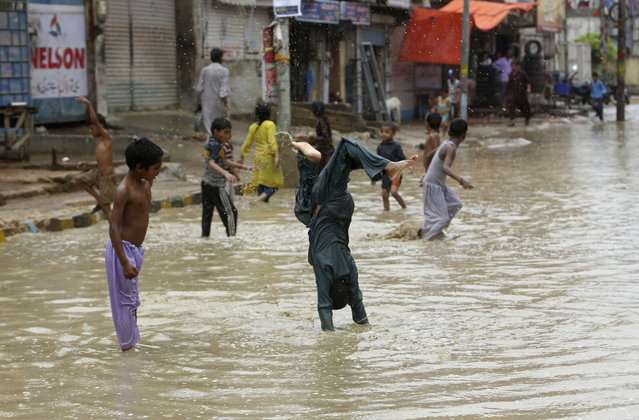 In this November 4, 2016 file photo, children swing in a park next to an election billboard promoting Nicaragua's President Daniel Ortega and running mate, his wife Rosario Murillo in Managua, Nicaragua. Nicaraguan opposition leaders returned to the negotiating table Wednesday, July 31, 2019, at a business center where talks on resolving the country's political crisis stalled months ago, but there was nobody there to talk to. The opposition wants Ortega, 73, to negotiate electoral reform and early elections. (Photo by Esteban Felix/AP Photo/File)
Edit Del
31 Aug 2019 00:01:00, post received 0 comments
Publication archive:
←   →
Popular tags:
All tags
Last searches: