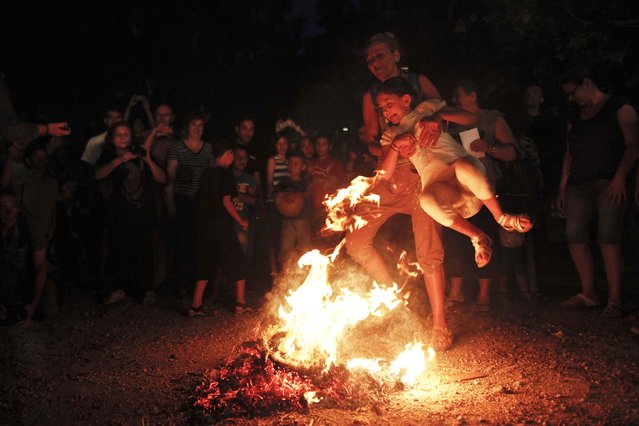 A woman helps a girl cross a fire as part of a traditional custom during the annual Klidonas event that takes place on the eve of the feast of Saint John the Baptist, in Athens June 23, 2014. (Photo by Alkis Konstantinidis/Reuters) 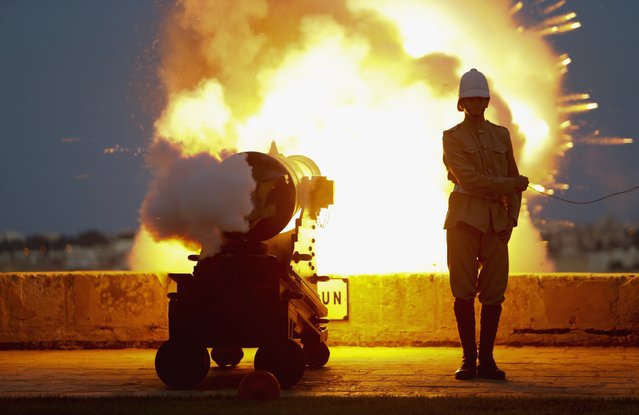 A National Heritage Trust historical reenactor in a Victorian-era Royal Malta Artillery uniform fires one of several cannons to mark the feast day of Saint John the Baptist, on the bastions of Valletta, in Malta, on June 23, 2014. (Photo by Darrin Zammit Lupi/Reuters) 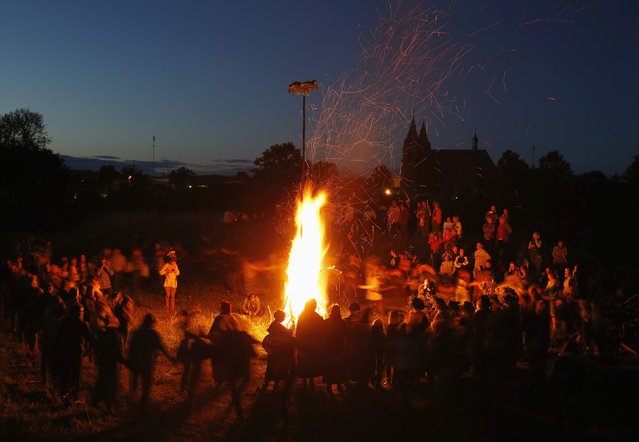 People take part in the Ivan Kupala festival near the town of Rakov, west of Minsk June 27, 2014. The ancient tradition, originating from pagan times, is usually marked with grand overnight festivities. On Kupala Night people sing and dance around campfires, believing it will purge them of their sins and make them healthier. (Photo by Vasily Fedosenko/Reuters) 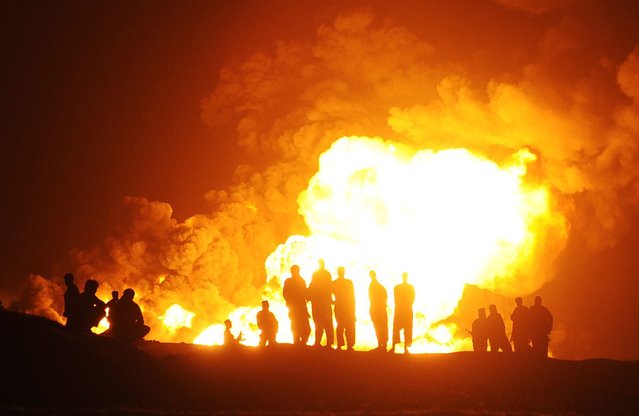 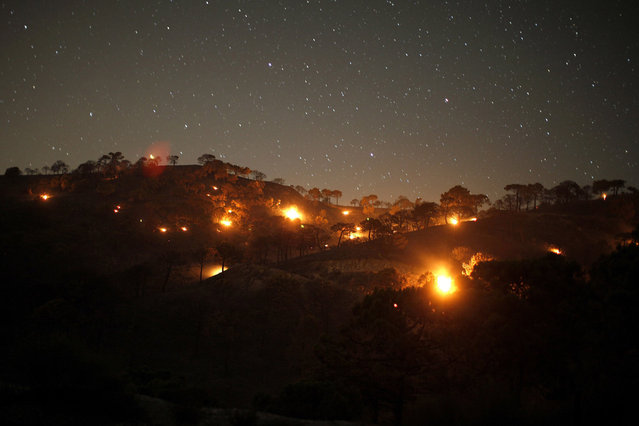 Small forest fires are pictured between pine trees at night at Sierra de Tejeda nature park, on a burnt mountain from El Collado mountain pass, near the town of Competa, near Malaga, southern Spain early June 30, 2014. A wildfire forced the evacuation of 600 people from their homes, most of the evacuated were resident tourists, as two houses were razed, according to local media. Picture taken using long exposure. (Photo by Jon Nazca/Reuters) 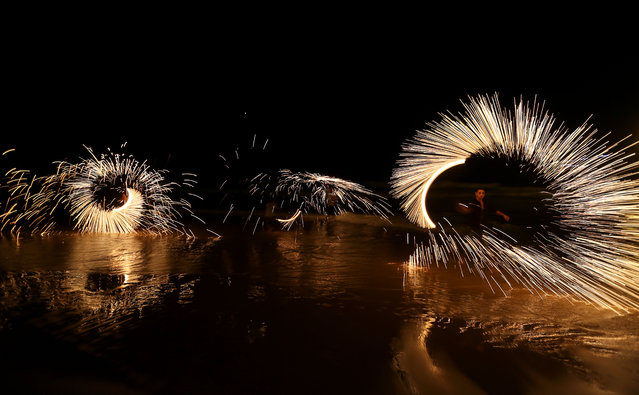 Palestinian boys play with fireworks as they celebrate the start of the Muslim holy month of Ramadan in Gaza City on Monday, June 30, 2014. Ramadan is traditionally a time of reflection and prayer, to focus on spirituality, good deeds and charity. (Photo by Hatem Moussa/AP photo)

A tactical rocket firing drill carried out by units of the Korean People's Army (KPA) Strategic Force is seen during a visit by North Korean leader Kim Jong Un in the western sector of the front in this undated photo released by North Korea's Korean Central News Agency (KCNA) in Pyongyang on July 10, 2014. (Photo by Reuters/KCNA) 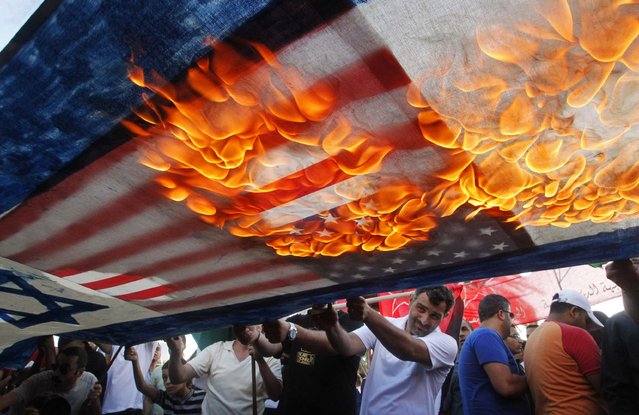 Lebanese and Palestinian protesters set fire to U.S. and Israeli flags during a demonstration to denounce Israeli air strikes on the Gaza strip, in Lebanon's southern port-city of Sidon July 10, 2014. At least 77 Palestinians, most of them civilians, have been killed in Israel's Gaza offensive, Palestinian officials said on Thursday, and militants kept up rocket attacks on Tel Aviv, Jerusalem and other cities in warfare showing no signs of ending soon. (Photo by Ali Hashisho/Reuters) 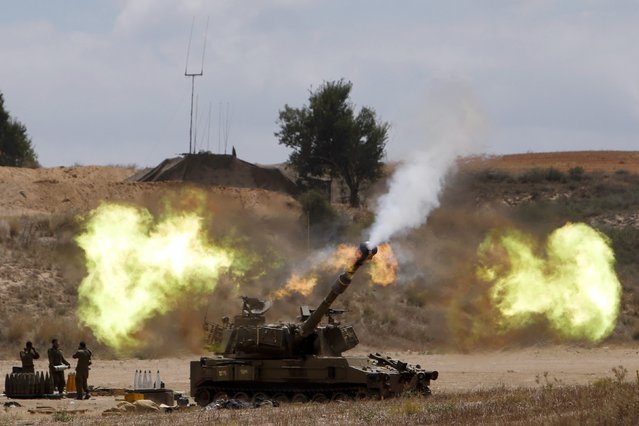 An Israeli mobile artillery unit fires towards the Gaza Strip July 18, 2014. Israel stepped up its ground offensive in Gaza early on Friday pounding targets with artillery fire and using tanks and infantry to battle Hamas fighters. Orange flashes illuminated the eastern Gaza Strip as Israeli gunboats off the Mediterranean coast fired shells and tracer bullets, and helicopters fired across the border. Hamas fired rockets back into Israel towards the southern towns of Ashdod and Ashkelon. Palestinian health officials said 23 Palestinians had been killed since Israel launched its ground offensive against the densely-populated strip of 1.8 million Palestinians on Thursday. Israel said one of its soldiers had been killed in fighting. (Photo by Nir Elias/Reuters) 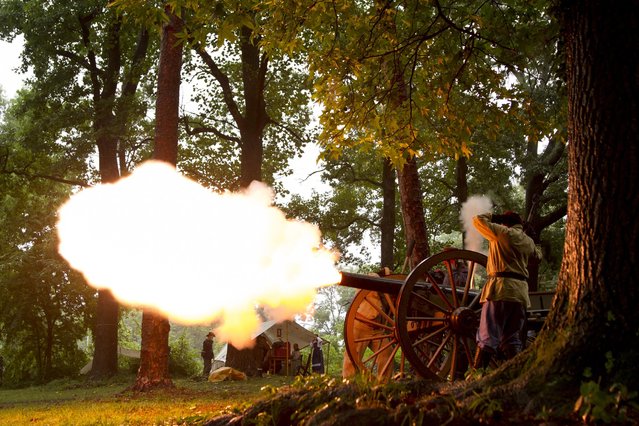 Civil War re-enactors fire a cannon every hour to commemorate the 150th anniversary of the Battle of Atlanta, in Atlanta, Georgia, July 19, 2014. (Photo by Christopher Aluka Berry/Reuters) 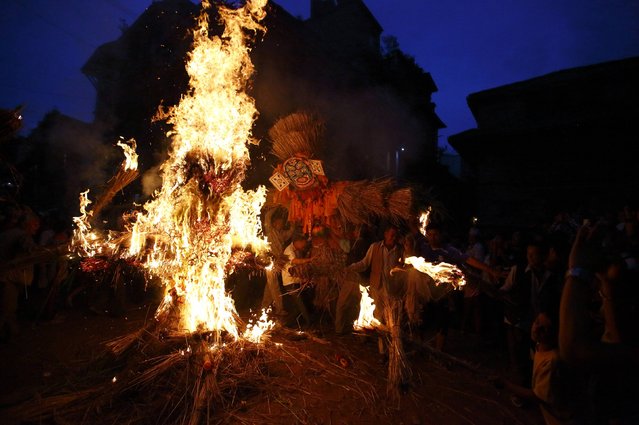 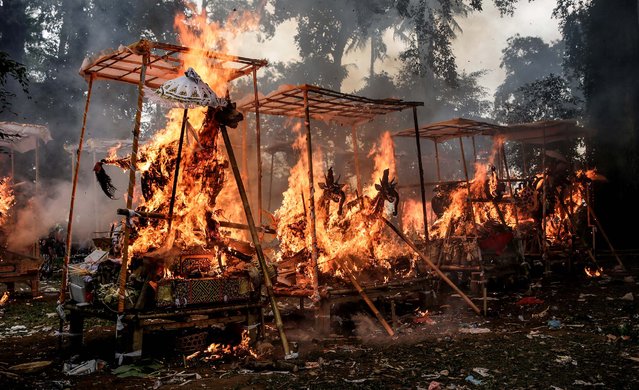 Sarcophagi burn at a cremation site during a mass cremation in Ubud, Bali, Indonesia, on August 1, 2014. More than 100 corpses were collectively cremated in the ceremony known as Ngaben Masal (Mass Cremation). Taking place every 4 years in Singakerta Village, it is one of the most important ceremonies for Balinese Hindu people. They believe that during the burnings the spirits of the deceased will be freed to reincarnate. (Photo by Agung Parameswara/Getty Images) 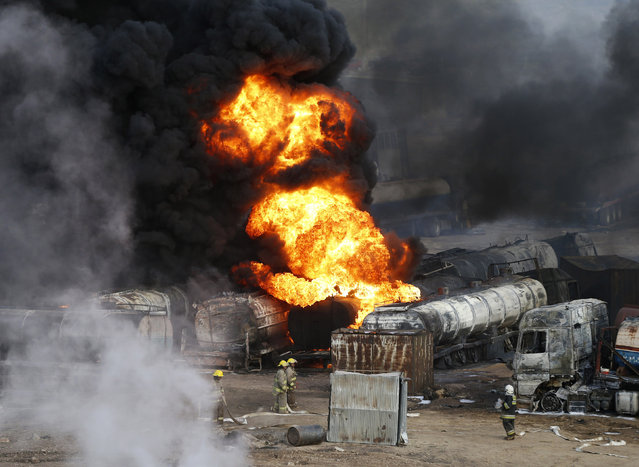 Smoke and flames rise from fuel trucks after an overnight attack by the Taliban on the outskirts of Kabul July 5, 2014. Taliban insurgents set fire on Saturday to about 200 oil tanker trucks supplying fuel for NATO forces in an attack just outside the Afghan capital Kabul, police said. (Photo by Mohammad Ismail/Reuters) 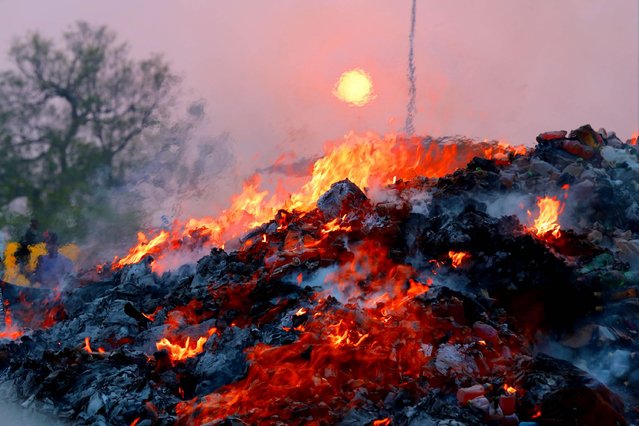 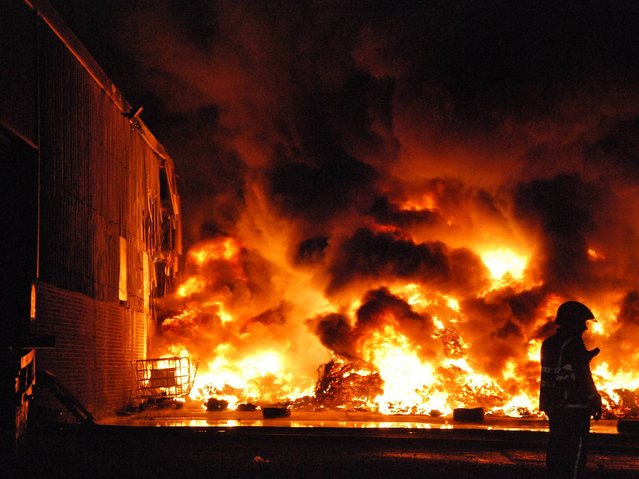 A large quantity of tyres alight at a recycling site in Renfrew, outside Glasgow, on Jule 11, 2014. (Photo by Scottish Fire and Rescue Service/PA Wire) 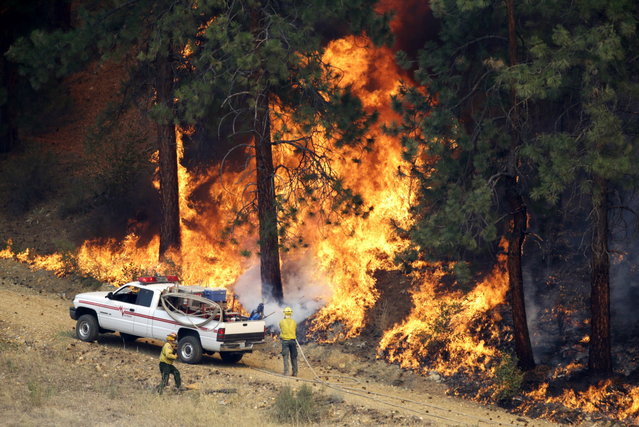 A firefighter cools a tree in a line of fire Friday, July 18, 2014, in Winthrop, Wash. A fire racing through rural north-central Washington destroyed about 100 homes, leaving behind smoldering rubble, solitary brick chimneys and burned-out automobiles as it blackened hundreds of square miles. (Photo by Elaine Thompson/AP Photo) 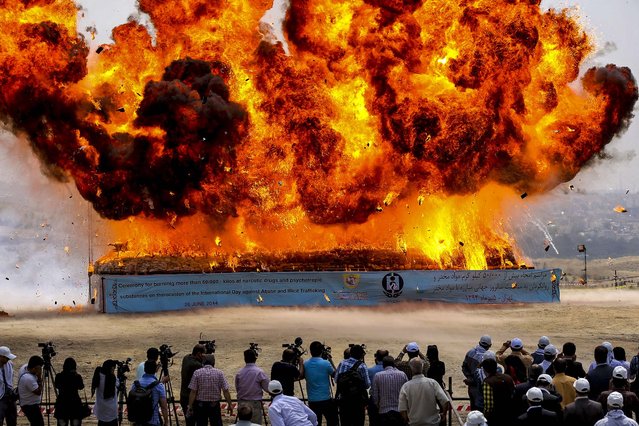 People look at a pile of seized narcotics is set fire during a ceremony commemorating International Day Against Drug Abuse and Illicit Trafficking in Tehran, on June 26, 2014. Iran's interior minister said Thursday international sanctions imposed over the country's nuclear program have hindered its ability to fight drug smuggling. (Photo by Ebrahim Noroozi/Assicuated Press) 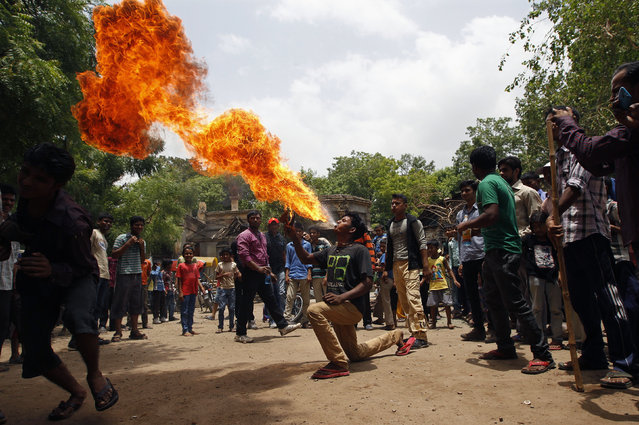 A Hindu devotee breathes fire during a rehearsal for the annual Rath Yatra, or chariot procession, in the western Indian city of Ahmedabad June 22, 2014. The annual religious procession commemorates a journey by Hindu god Jagannath, his brother Balabhadra and sister Subhadra, in specially made chariots. The Rath Yatra will be held on June 29. (Photo by Amit Dave/Reuters) 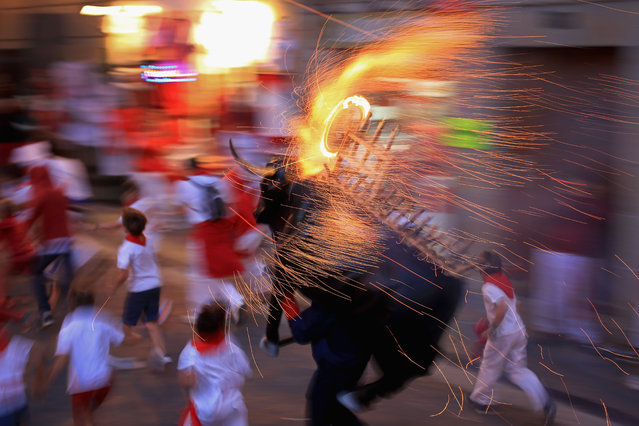 People and children are chased by a Toro del Fuego (flaming bull) as it is runs through the streets of Pamplona on the third day of the San Fermin Running Of The Bulls Festival on July 8, 2014 in Pamplona, Spain. The annual Fiesta de San Fermin, made famous by the 1926 novel of US writer Ernest Hemmingway “The Sun Also Rises”, involves the running of the bulls through the historic heart of Pamplona. (Photo by Christopher Furlong/Getty Images) 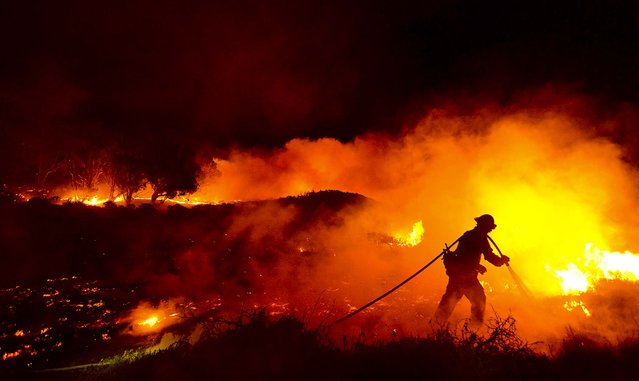 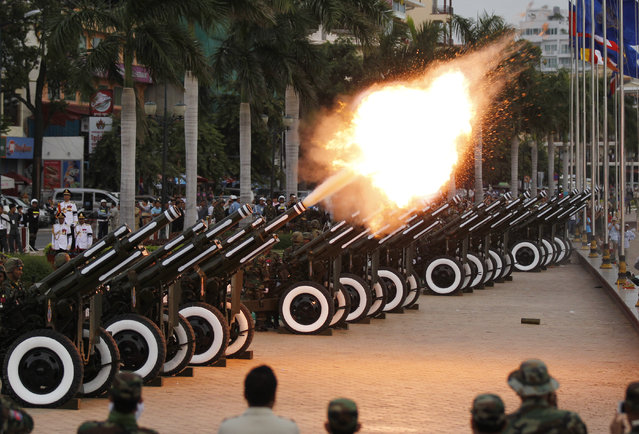 Cambodian military officers fire artillery during a ceremony to pray for former King Norodom Sihanouk at the Royal Palace in Phnom Penh, Cambodia, July 12, 2014. Cambodians hold the ceremony for moving the ashes of former King Norodom Sihanouk to keep in a stupa at the Silver pagoda in the Royal Palace after he was cremated on February 4, 2013. The monarch died at the age of 89 on October 15, 2012. (Photo by Mak Remissa/EPA) 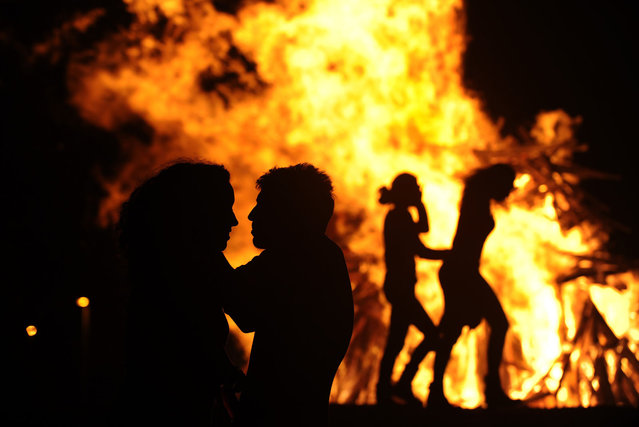 People attend a party held during the night of the San Juan bonfire on the beach of Playa de Poniente in Gijon early June 24, 2014. Fires formed by burning unwanted furniture, old school books, wood and effigies of malign spirits are seen across Spain as people celebrate the night of San Juan, a purification ceremony coinciding with the summer solstice. (Photo by Eloy Alonso/Reuters) 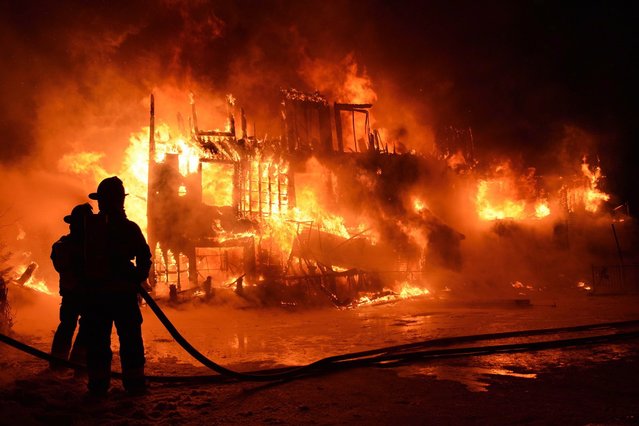 Fire engulfs a seniors residence in L'Isle-Verte, Que., early Thursday, Jan.23, 2014. A multimillion-dollar lawsuit has been filed against the Quebec town where 32 people died in a fire at a seniors' home last January. (Photo by Frances Drouin/The Canadian Press) 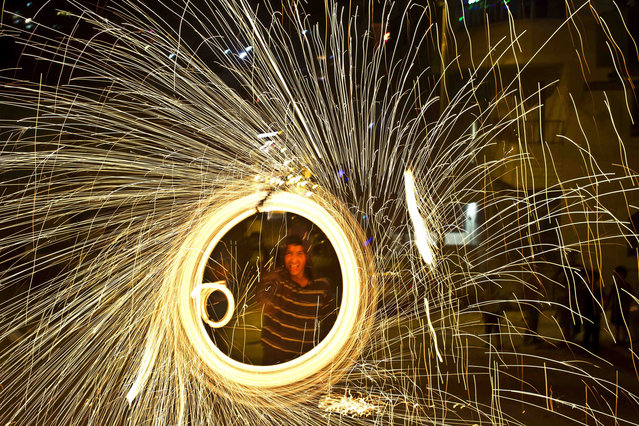 A Palestinian youth plays with a homemade sparkler after breaking his fast on the second day of the Muslim holy fasting month of Ramadan in the West Bank city of Ramallah, Monday, June 30, 2014. Muslims throughout the world are celebrating the holy month of Ramadan, where observants fast from dawn till dusk. (Photo by Muhammed Muheisen/AP Photo) 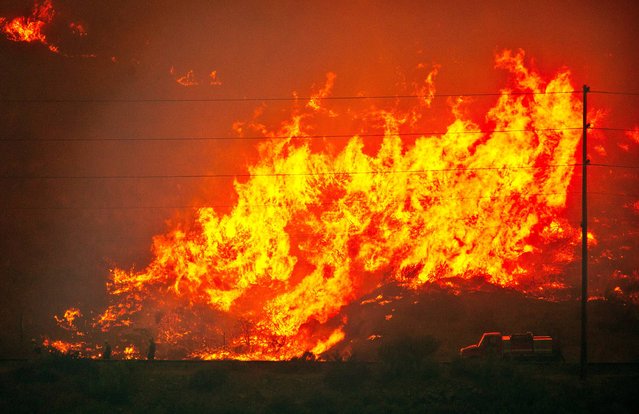 Firefighters, lower left, are visible as fire races up the east side of Numeral Mountain from Highway 97A, close to Entiat, Wash., Wednesday night, July 9, 2014. (Photo by Don Seabrook/AP Photo/The Wenatchee World) 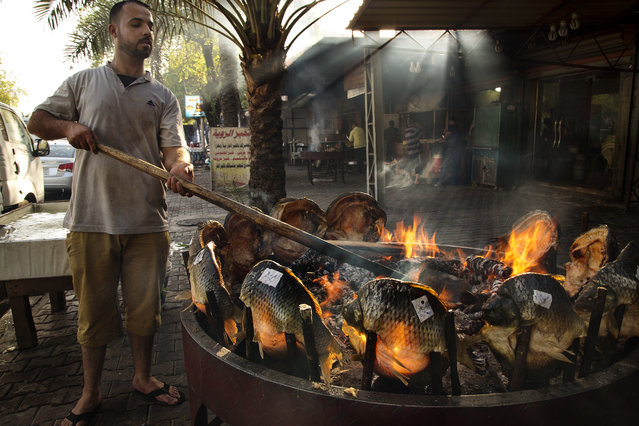