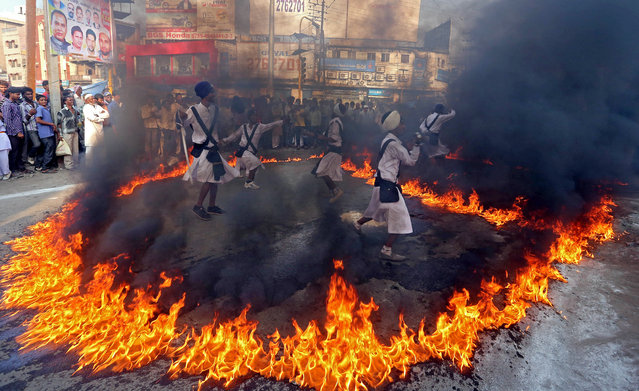 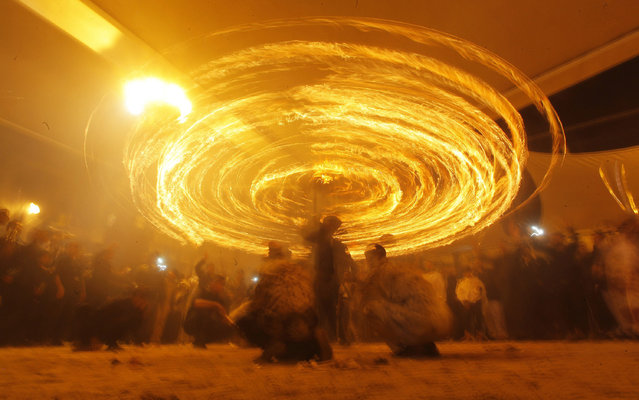 Shi'ite Muslims perform with fire during commemorations for Ashoura in Najaf, November 3, 2014. Ashoura, which falls on the 10th day of the Islamic month of Muharram, commemorates the death of Imam Hussein, grandson of Prophet Mohammad, who was killed in the seventh century battle of Kerbala. (Photo by Alaa Al-Marjani/Reuters) 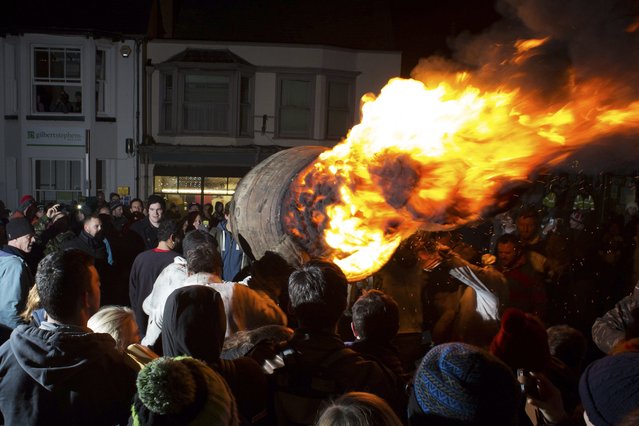 Visitors watch as a burning barrel soaked in tar is carried through the crowds at the annual Ottery St Mary Tar Barrel festival, in Devon, England November 5, 2014. Believed to have its origins in the 1605 Gunpowder Plot, the failed attempt to assassinate King James I of England, the Tar Barrel festival is celebrated yearly in the southwestern English town. (Photo by Daniel Leal-Olivas/Reuters) 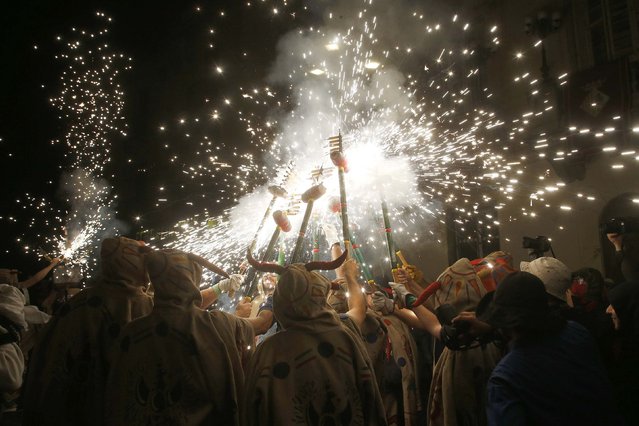 Revellers dressed in devil costumes light fireworks during the “Les Santes” (The Saints) festival in Mataro, near Barcelona July 20, 2014. The wealthy northeastern region of Catalonia last month dropped plans for a non-binding referendum on independence from Spain on November 9 after a court declared such a vote against the constitution and had instead planned to hold a “consultation of citizens” on the same day. Although Spanish Prime Minister Mariano Rajoy and politicians in Catalonia have called for dialogue over the region's status after the initial referendum plans were abandoned, tensions are still simmering before the November 9 alternative vote. (Photo by Gustau Nacarino/Reuters) 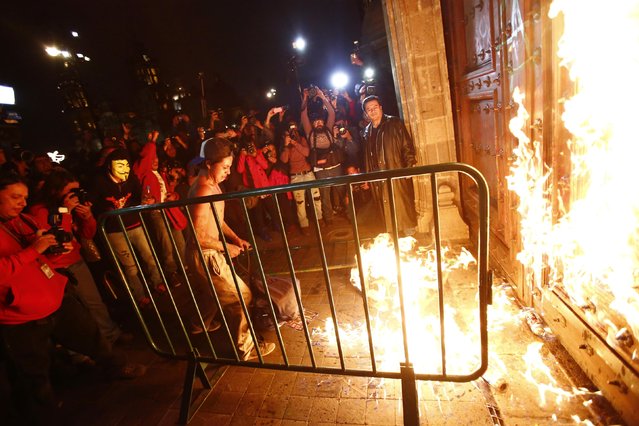 A group of protesters set fire to the wooden door of Mexican President Enrique Pena Nieto's ceremonial palace, during a protest denouncing the apparent massacre of 43 trainee teachers, in the historic center of Mexico City late November 8, 2014. The group, carrying torches, broke away from what had been a mostly peaceful protest demanding justice for the students, who were abducted six weeks ago and apparently murdered and incinerated by corrupt police in league with drug gang members. (Photo by Edgard Garrido/Reuters) 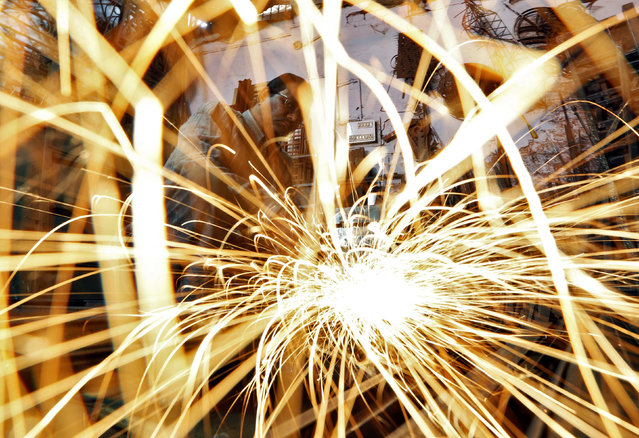 A worker grinds an iron window frame used in a dairy machine at a manufacturing unit in the western Indian city of Ahmedabad November 3, 2014. Indian factory activity expanded at a modest pace in October, as stronger demand led manufacturers to add jobs for the first time in four months and allowed them to raise prices, a business survey showed on Monday. (Photo by Amit Dave/Reuters) 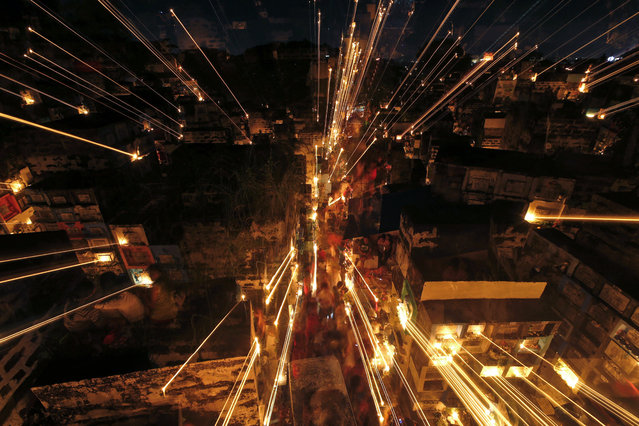 A zoomed-in image of Filipinos lighting candles at grave sites of departed loved ones in observance of All Saints' Day at a public cemetery in Manila, Philippines, November 1, 2014. Filipino Catholics honored and celebrated their late loved ones on All Saints' Day by flocking to cemeteries. (Photo by Ritchie B. Tongo/EPA) 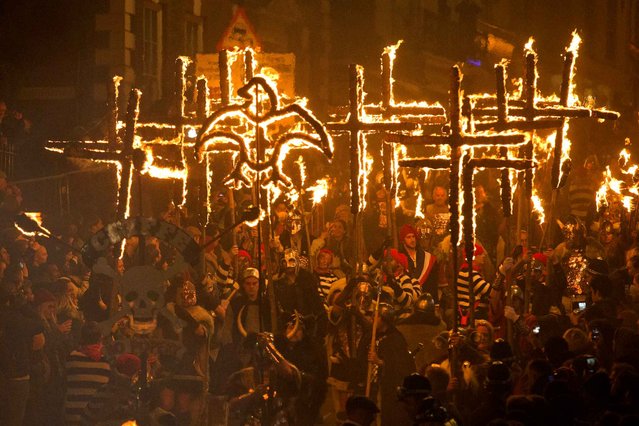 Bonfire societies parade through the streets of Lewes in Sussex, on November 5, 2014, during the traditional Bonfire Night celebrations. Bonfire Night is related to the ancient festival of Samhain, the Celtic New Year. Processions held across the South of England culminate in Lewes on November 5, commemorating the memory of the seventeen Protestant martyrs. Thousands of people attend the parade through the narrow streets until the evening comes to an end with the burning of an effigy, or “guy”, usually representing Guy Fawkes, who died in 1605 after an unsuccessful attempt to blow up The Houses of Parliament. (Photo by Justin Tallis/AFP Photo) 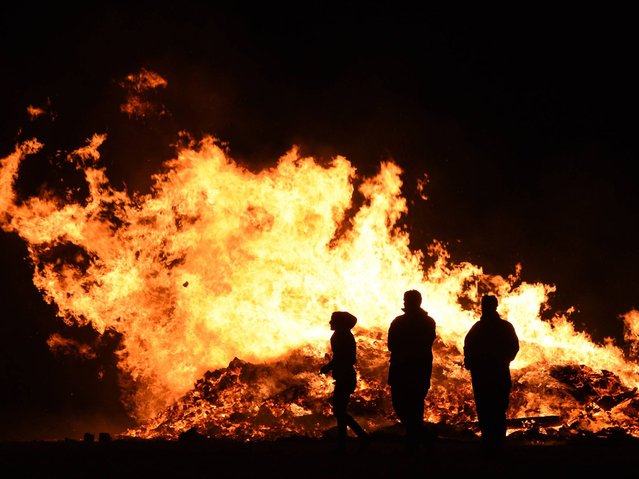 Fireworks technicians stand in front of a large bonfire after a public fireworks display in Driffield, Northern England, on November 1, 2014, held prior to the Bonfire Night on November 5. (Photo by Oli Scarff/AFP Photo) 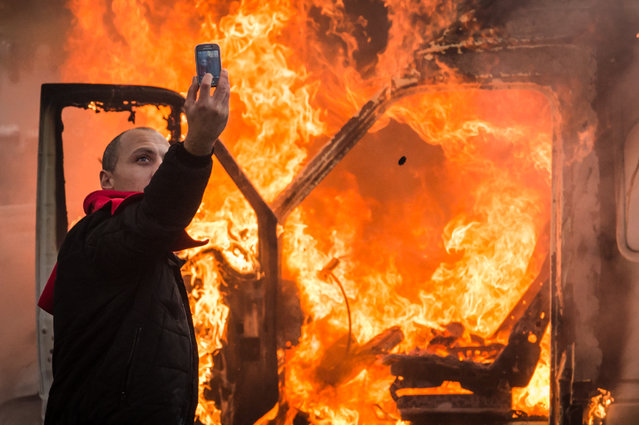 A protestor makes a selfie in front of a burning car during a national trade union demonstration in Brussels, Thursday November 6, 2014. Tens of thousands of demonstrators are converging on the Belgian capital to protest government policies that will extend the pension age, contain wages and cut into public services. (Photo by Geert Vanden Wijngaert/AP Photo)
Edit Del
10 Nov 2014 14:24:00, post received 0 comments
Publication archive:
←   →
Popular tags:
All tags
Last searches: