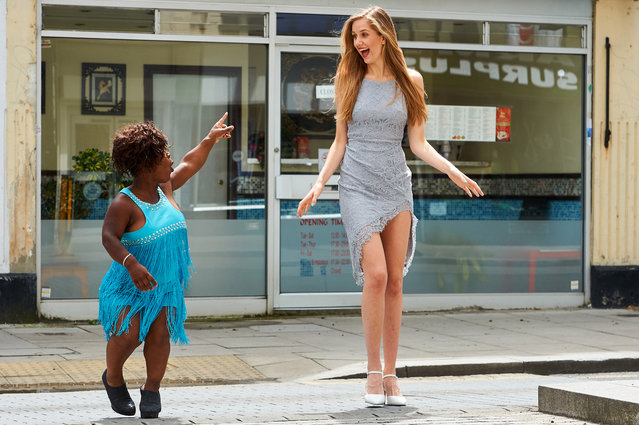 One of the worlds shortest models Mary Russell at 4 feet 1 inch with 6 foot model Georgia Meacham in London, UK on June 16, 2016. The 4ft1 beauty suffers with achondroplasia a medical term for dwarfism, which means she has as average sized torso but short arms and short legs, with an oversized head. As well as stifled growth, Mary also suffers with sciatica and spinal stenosis, an abnormal narrowing of the spinal canal – which cause agonising nerve problems, leaving her in excruciating pain and unable to stand for long periods of time. The condition leaves Mary, 47, struggling with everyday tasks things most people take for granted like going to the supermarket, getting cash from an ATM and ordering a drink at a bar become a challenge. (Photo by Simon Jacobs/Caters News Agency) 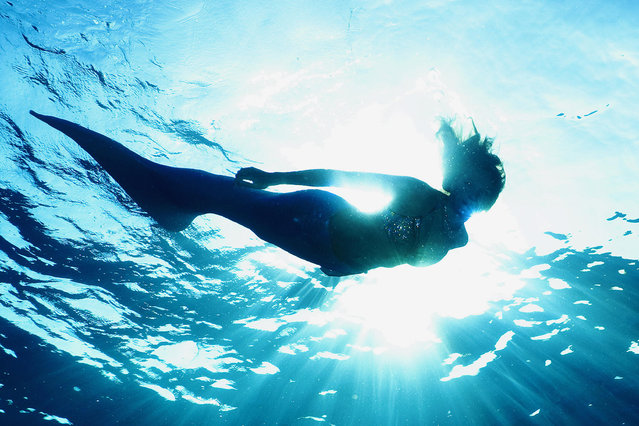 Twenty nine year old Linden Wolbert in the Caribbean sea off Freeport in the Bahamas. With her graceful tail kicking out behind her, real-life mermaid Linden Wolbert swims with reef sharks in the crystal clear Caribbean. Using her unique 35-pound prosthetic tail created by a top Hollywood special effects artist, 29-year old Linden travels the world to swim in the wild as a professional mermaid. A dive master and expert free diver, LA based Linden is able to hold her breath for up to five minutes at a time. And using her tail which is fitted to her specifications she is can propel herself at speeds of up to 15 knots (17 mph) at a time. (Photo by Matthew Addison/Barcroft USA/Getty Images) 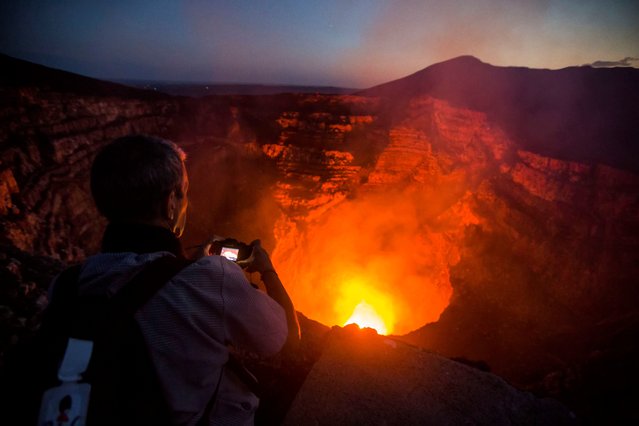 A tourist takes pictures of a lava lake inside the crater of the Masaya Volcano in Masaya, some 30km from Managua on May 19, 2016. Hundreds of tourists arrive daily to observe the lava flow which formed six months ago near the surface of the crater of the small Masaya volcano, one of the most active in Nicaragua. (Photo by Inti Ocon/AFP Photo) 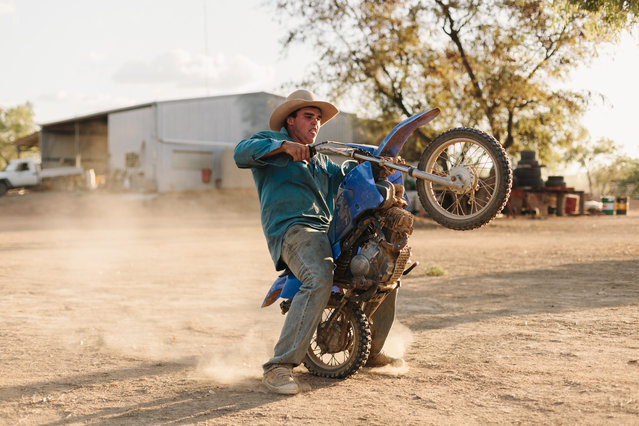 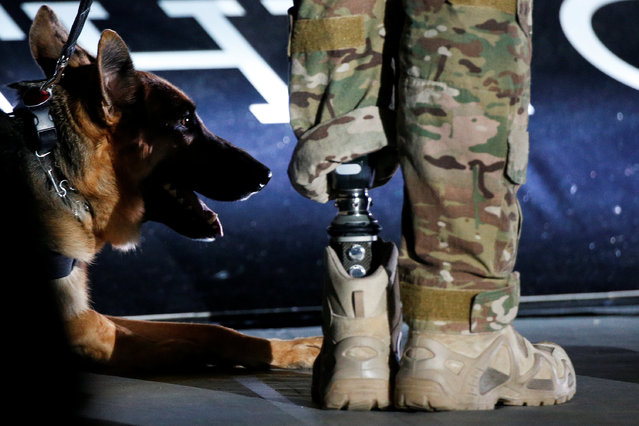 Service dog Kai is pictured with SST August O'Niell as they take part in the opening ceremony of the Invictus Games in Orlando Florida, U.S., May 8, 2016. (Photo by Carlo Allegri/Reuters) 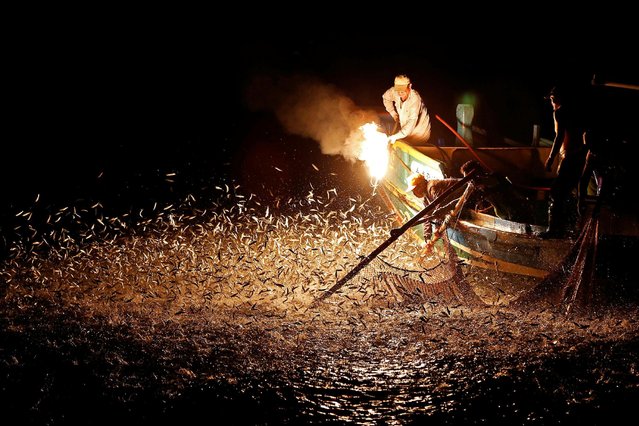 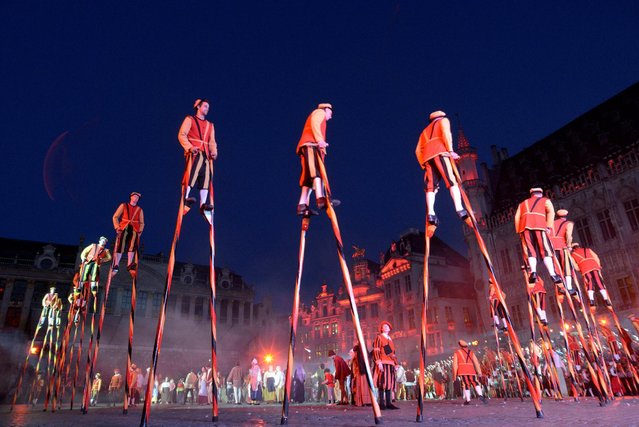 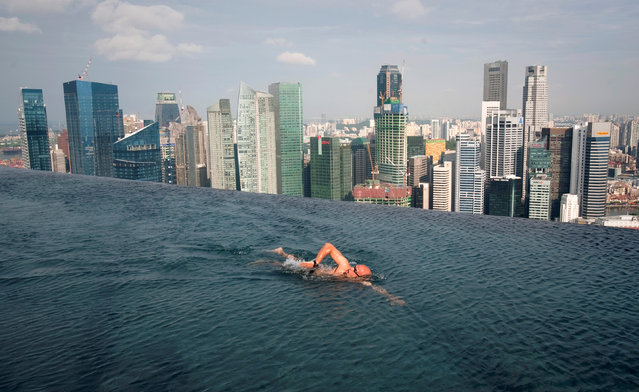 A guest swims in the infinity pool of the Skypark that tops the Marina Bay Sands hotel towers in Singapore June 24, 2010. (Photo by Vivek Prakash/Reuters) 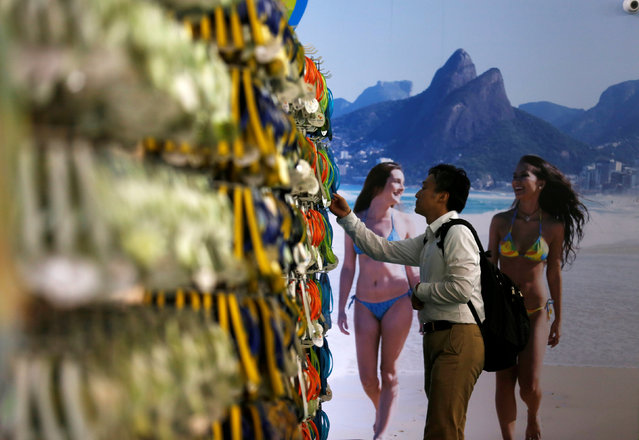 A man looks at products during the opening of the Rio 2016 Olympics megastore on Copacabana beach in Rio de Janeiro, Brazil, June 30, 2016. (Photo by Pilar Olivares/Reuters) 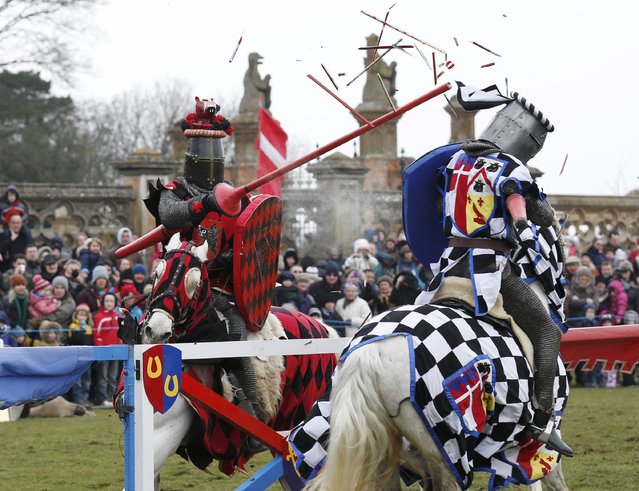 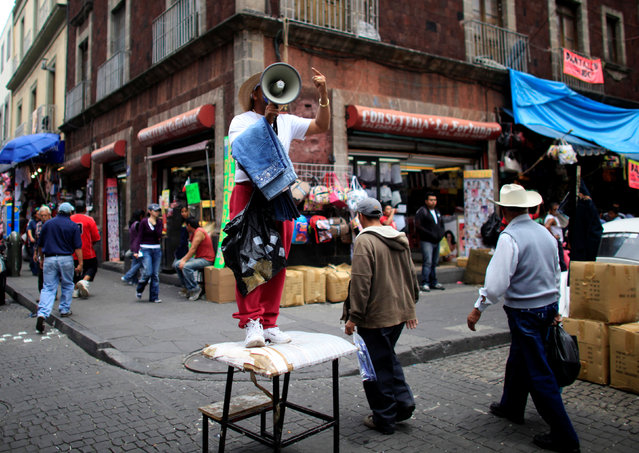 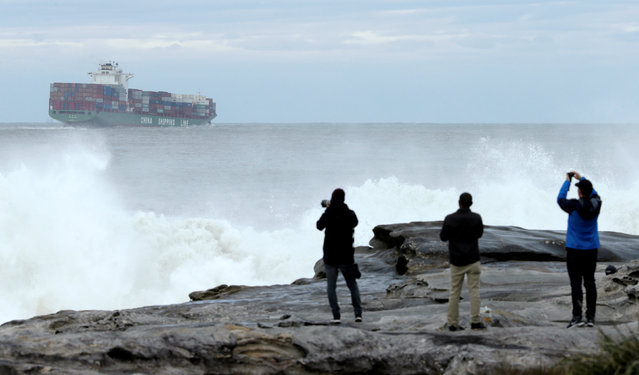 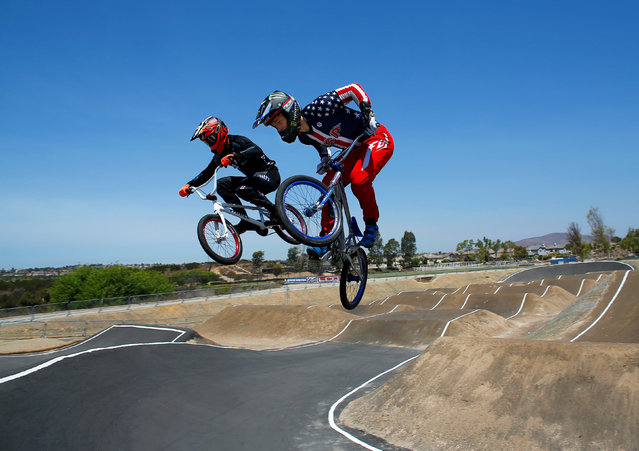 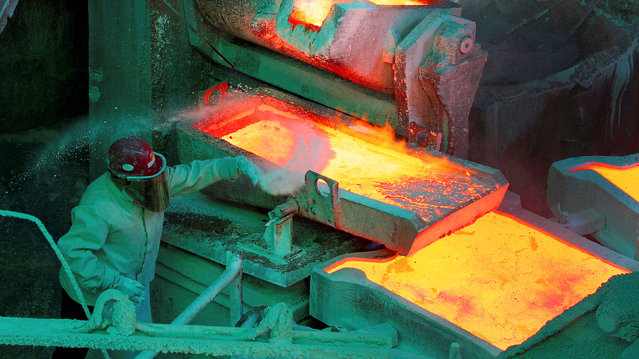 A worker monitors a process inside the plant at the copper refinery of Codelco Ventanas in Ventanas city, northwest of Santiago, Chile January 7, 2015. (Photo by Rodrigo Garrido/Reuters) 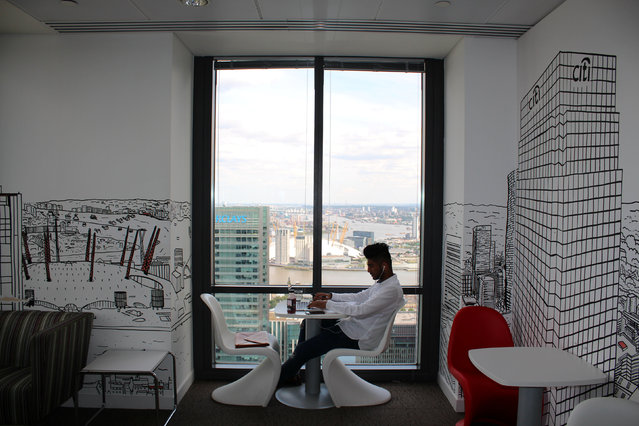 A man uses a laptop in the Level39 FinTech hub based in the One Canada Square tower of the Canary Wharf district of London, Britain, August 5, 2016. (Photo by Jemima Kelly/Reuters) 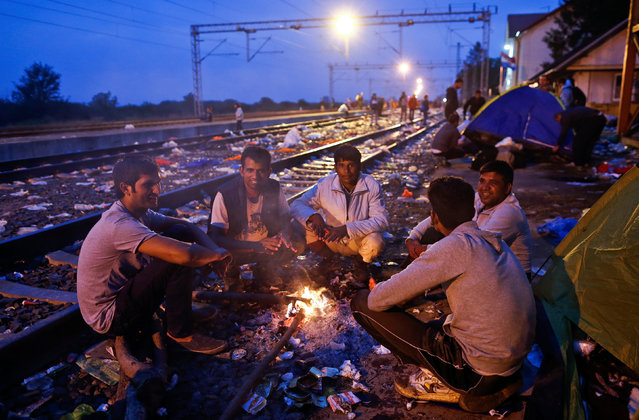 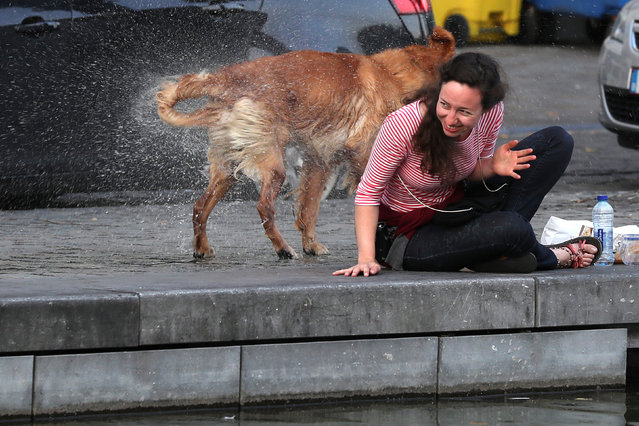 A woman is caught unexpectedly by a dog shaking off water after emerging from a canal in Brussels, Belgium August 17, 2016. (Photo by Clodagh Kilcoyne/Reuters) 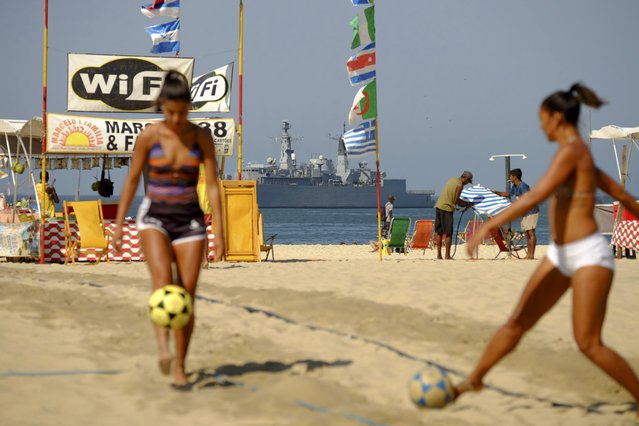 A navy ship patrols offshore Copacabana beach before the start of the Rio 2016 Olympics in Rio de Janeiro, August 2, 2016. (Photo by Paul Robinson/Reuters) 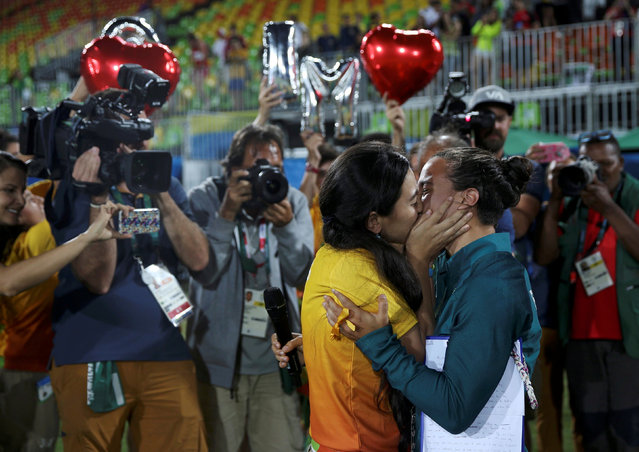 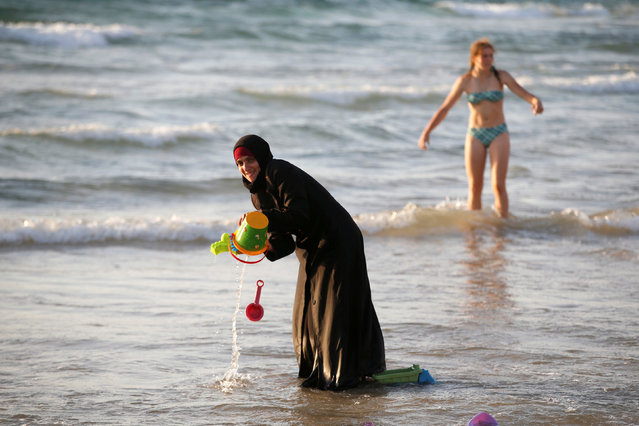 A Muslim woman wearing a Hijab stands in the waters in the Mediterranean Sea as an Israeli stands nearby on the beach in Tel Aviv, Israel August 21, 2016. (Photo by Baz Ratner/Reuters) 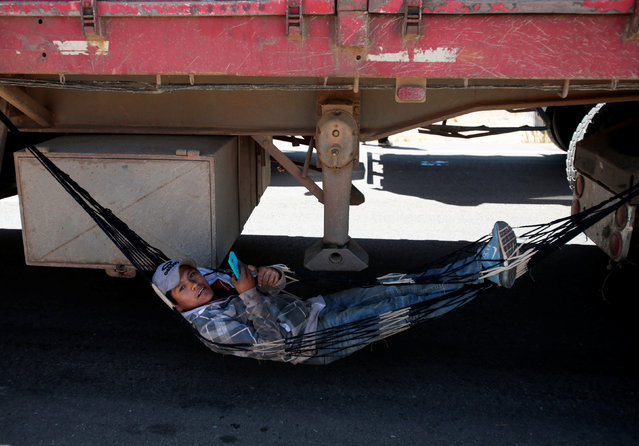 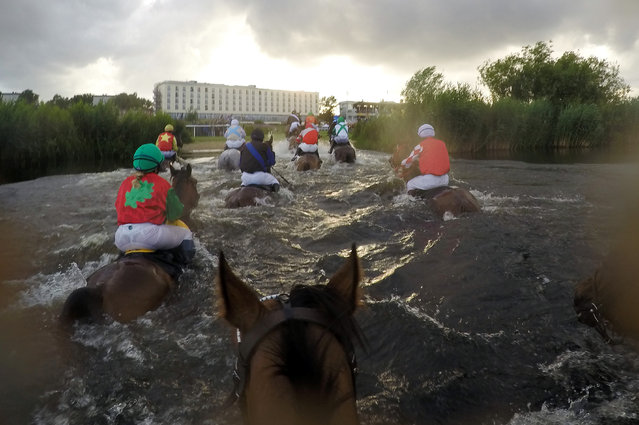 The Pavel Vovcenko-trained Falconettei has won one of the highlights of the German racing season, the Alpine Motorenöl-Seejagdrennen lake race at Hamburg on Tuesday, July 5, 2016. A type of steeplechase unique to Germany in which horses have to swim through a lake as part of the course, Falconettei and jockey Cevin Chan came home unchallenged. A field of 13 runners took part, one of the biggest ever fields assembled for a lake race, and all 13 negotiated the lake successfully. (Photo by Frank Sorge/Rex Features/Shutterstock) 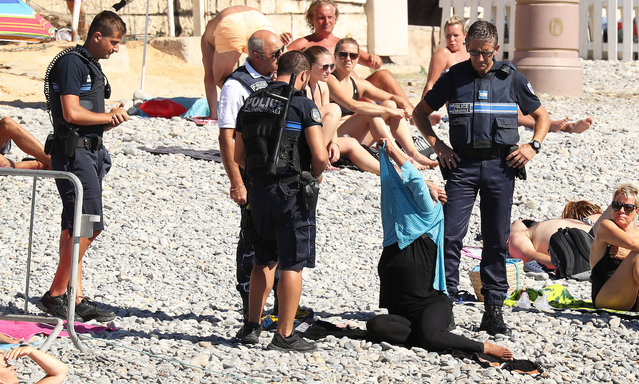 Police patrolling the Promenade des Anglais beach in Nice, France on August 24, 2016, fine a woman for wearing a burkini. (Photo by VantageNews.com) 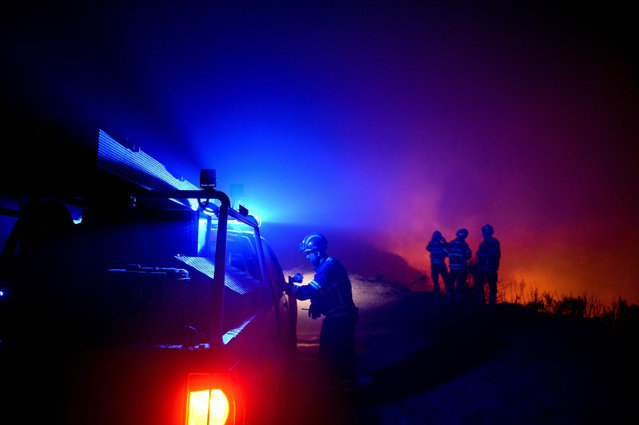 Firefighters gather to evaluate the progression of the wildfire at Calheta in Madeira island on August 12, 2016. Firefighters were making progress in quenching forest fires that have ravaged parts of Portugal and France, officials said on August 12, 2016, as Spain faced a rash of possibly deliberate blazes. The situation had calmed down on the frontline of fires in northern Portugal and on the island of Madeira where three people perished this week in the flames. (Photo by Patricia de Melo Moreira/AFP Photo) 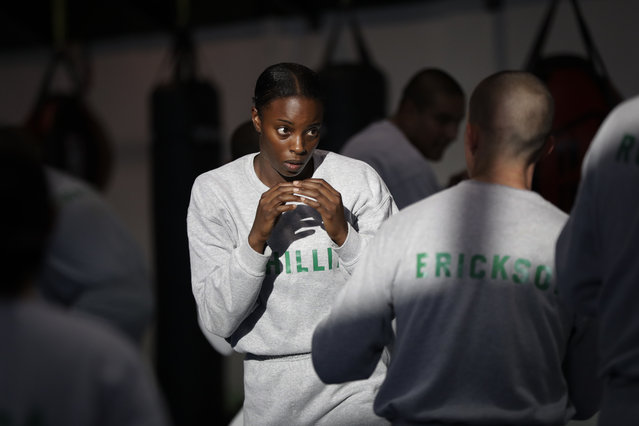 In this Friday, July 29, 2016 photo, Los Angeles County sheriff's deputy recruit Renata Phillip, center, trains with Steve Erickson during a defensive tactics class at the Biscailuz Regional Training Center in Monterey Park, Calif. Phillip is one of just two black women in her class of 84 recruits. More than half are men and most are white or Hispanic. Only three recruits out of every 100 will make it to graduation, said Capt. Scott Gage, who's in charge of training at the Los Angeles County Sheriff's Department. (Photo by Jae C. Hong/AP Photo) 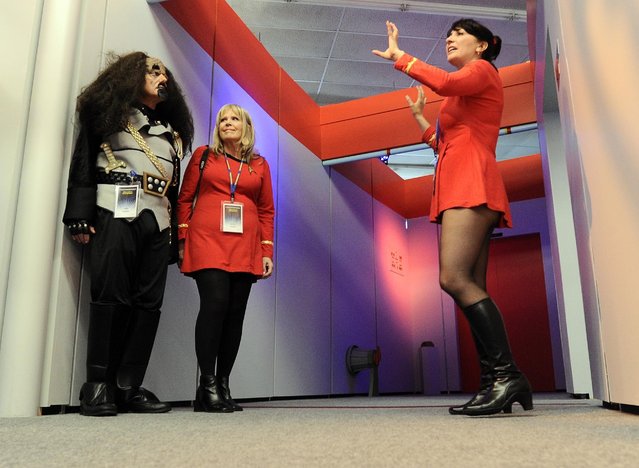 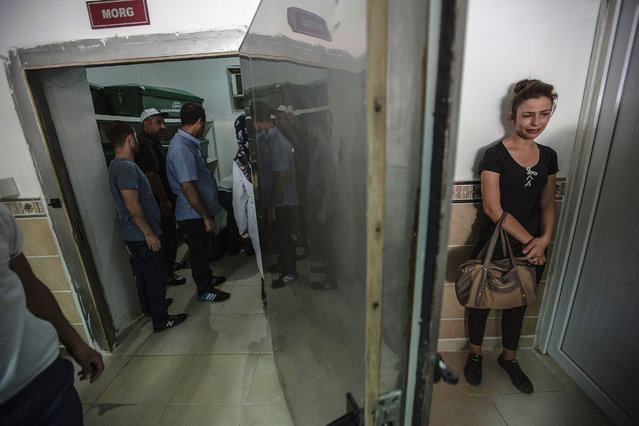 A woman cries at the morgue as she waits for the coffin of her relative, killed during last night's attack on a wedding party that left 50 dead in Gaziantep in southeastern Turkey near the Syrian border on August 21, 2016. At least 50 people were killed when a suspected suicide bomber linked to Islamic State jihadists attacked a wedding thronged with guests, officials said on August 21. (Photo by Ahmed Deep/AFP Photo)
Edit Del
28 Aug 2016 10:12:00, post received 0 comments
Publication archive:
←   →
Popular tags:
All tags
Last searches: