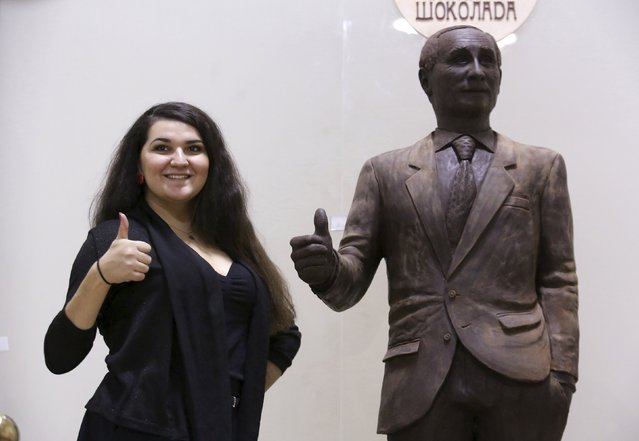 A visitor poses for a picture near a life-sized statue of Russian President Vladimir Putin made out of chocolate, which is on display at the Festival of Chocolate fair in St. Petersburg, Russia, December 5, 2015. (Photo by Peter Kovalev/Reuters) 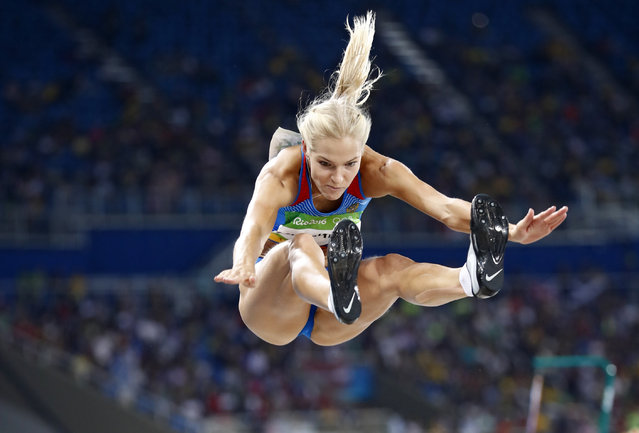 Dariya Klishina of Russia makes an attempt during the women's Long Jump Qualifying round of the Rio 2016 Olympic Games Athletics, Track and Field events at the Olympic Stadium in Rio de Janeiro, Brazil, 16 August 2016. (Photo by Diego Azubel/EPA) 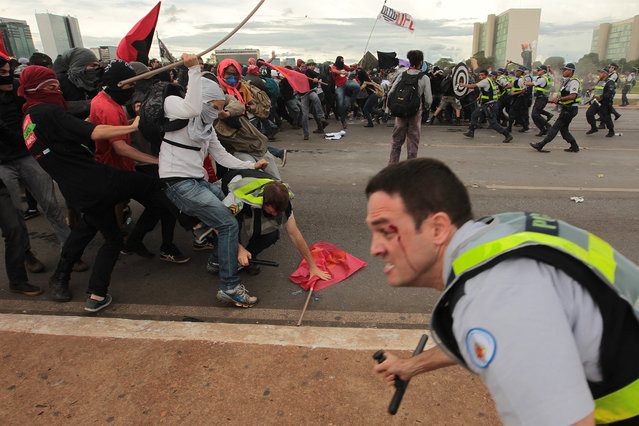 Protestors clash with the Police during a demonstration at the Ministries Esplanade, the avenue of the main Governmental buidings in the country, after the Senate passed the cuts promoted by the Government, in Brasilia, Brazil, 13 December 2016. (Photo by Joedson Alves/EPA) 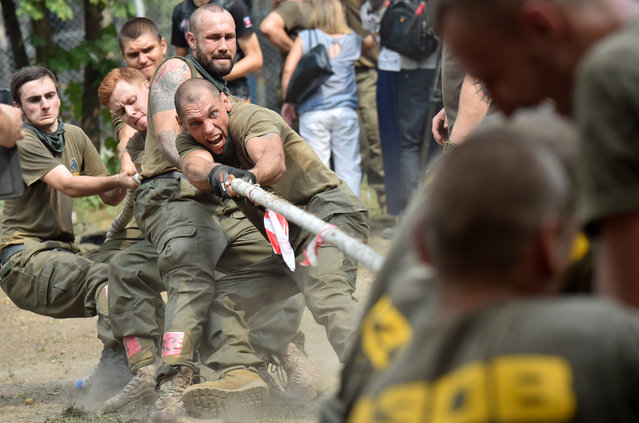 Recruits to the Azov far-right Ukrainian volunteer battalion, take part in their competition in Kiev, on August 14, 2015 prior leaving to the battle fields of eastern Ukraine. (Photo by Sergei Supinsky/AFP Photo) 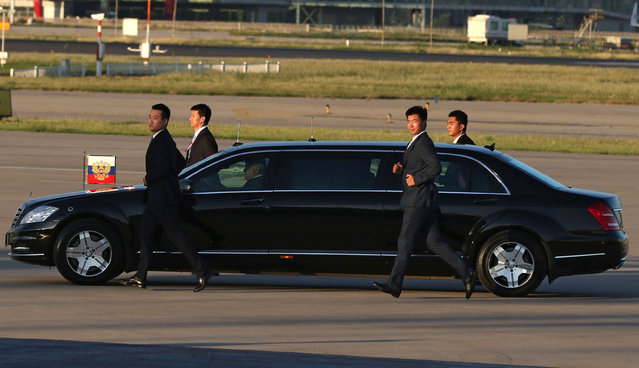 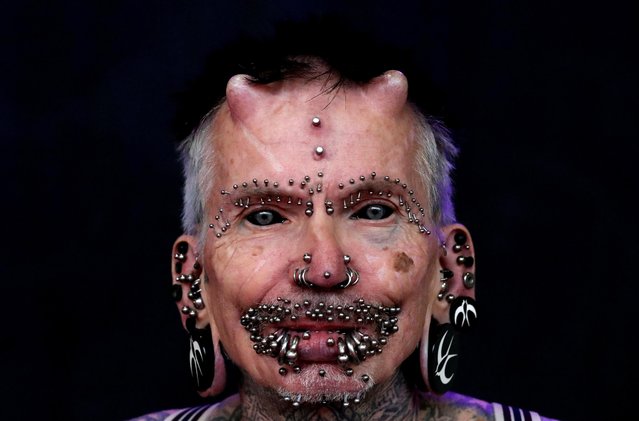 Rolf Buchholz of Germany, who says that he is holding the world record with his 480 piercings, poses during the 2019 International Brussels Tattoo Convention in Brussels, Belgium on November 8, 2019. (Photo by Yves Herman/Reuters) 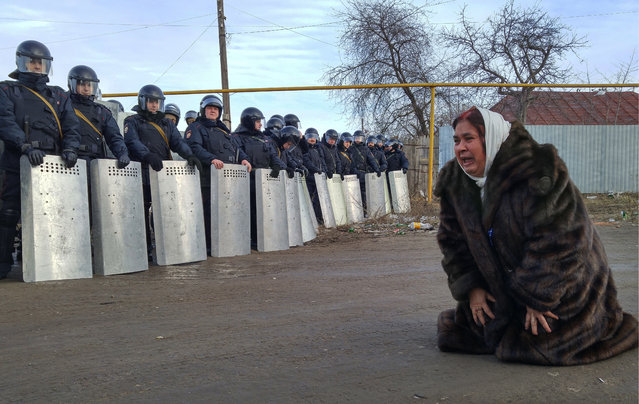 Local resident and law enforcement officers during the riots in the village of Plekhanovo in Tula region, Russia on March 17, 2016. On the eve of a group of residents of the village, where mainly representatives of gypsy ethnicity live, tried to prevent the gas service from repairing the pipeline damaged by an unauthorized attempt to connect to the gas supply system. Repair work had to be suspended until the arrival of the police. (Photo by Sergey Starikov/TASS) 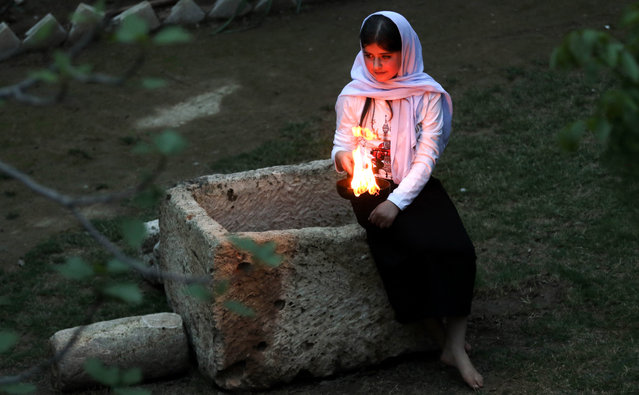 Iraqi Yazidis light candles and paraffin torches outside Lalish temple situated in a valley near Dohuk, 430 km (260 miles) northwest of Baghdad, during a ceremony to celebrate the Yazidi New Year on April 18, 2017. The Yazidis, who number about 1.6 million, commemorate the arrival of the light into the world during the celebration. (Photo by Safin Hamed/AFP Photo) 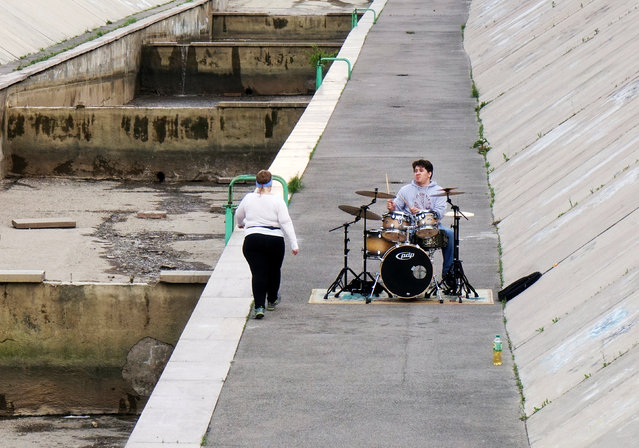 A woman walks past a drummer as he performs along a dry bed of the Esentai river in Almaty, Kazakhstan, May 4, 2016. (Photo by Shamil Zhumatov/Reuters) 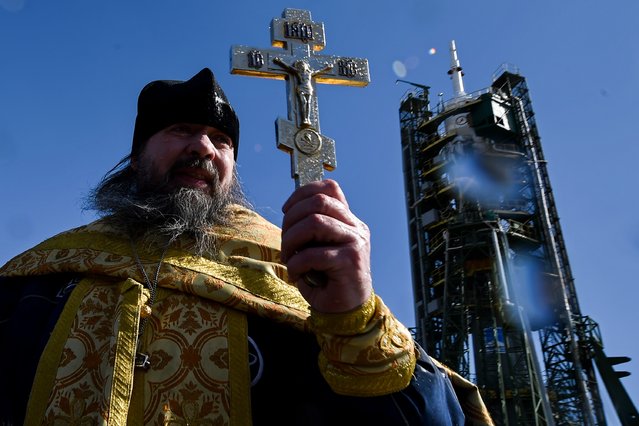 A Russian Orthodox priest conducts a blessing in front of the Soyuz TMA-20M spacecraft at the launch pad of the Russian-leased Baikonur cosmodrome on March 17, 2016. (Photo by Kirill Kudryavtsev/AFP Photo) 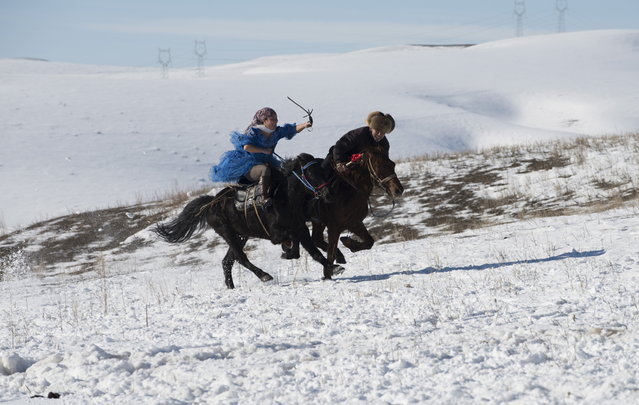 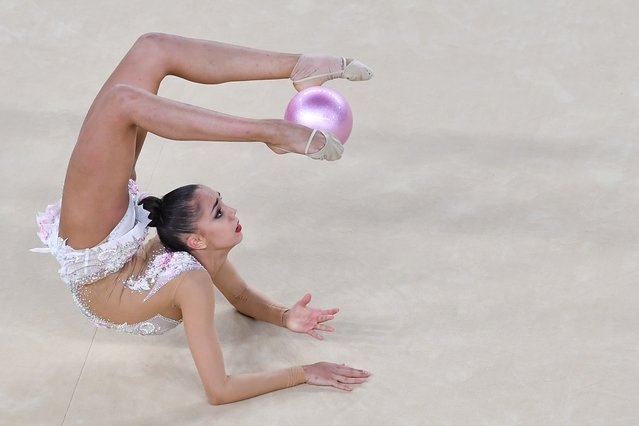 Russia's Margarita Mamun competes in the individual all-around final event of the Rhythmic Gymnastics at the Olympic Arena during the Rio 2016 Olympic Games in Rio de Janeiro on August 20, 2016. (Photo by Ben Stansall/AFP Photo) 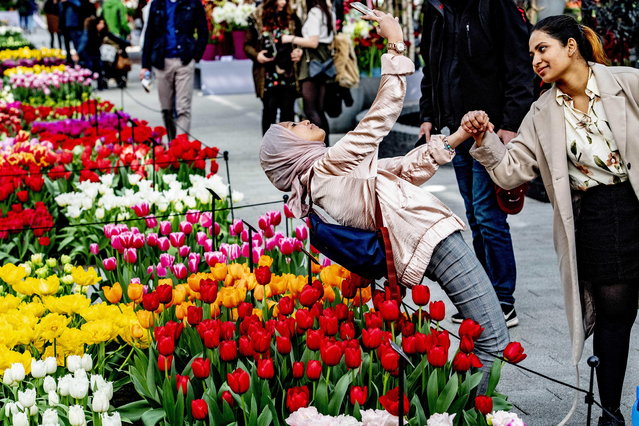 Tourists take selfies among flowers at the Keukenhof garden in Lisse, Netherlands, 24 March 2019. This year's theme of the tourist attraction floral park is “Romance”. (Photo by Robin Utrecht/EPA/EFE) 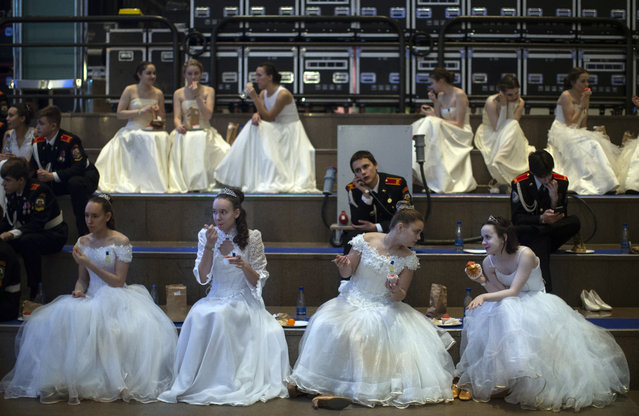 Participants of a ball for students of military schools sit backstage during an annual ball in Moscow, Russia, Tuesday, December 11, 2018. In the revival of a czarist tradition, more than 1,000 students both from military and general schools travelled from all over Russia to Moscow to take part in the annual ball. (Photo by Alexander Zemlianichenko/AP Photo) 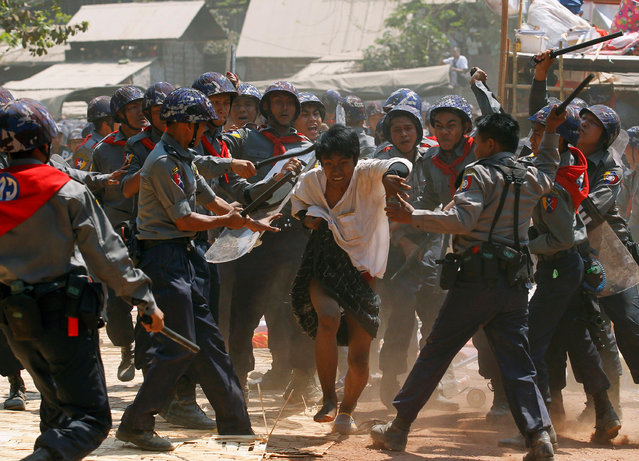 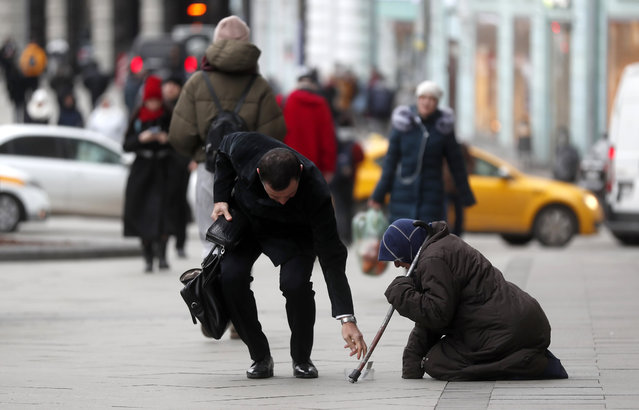 A beggar woman begs for alms on Tverskaya street in downtown of Moscow, Russia, 20 November 2019. (Photo by Maxim Shipenkov/EPA/EFE) 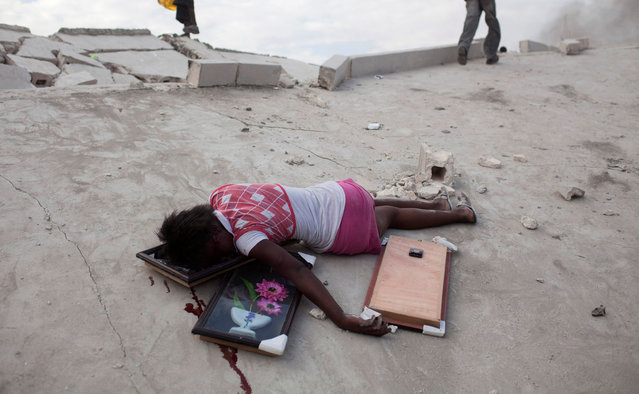 Fifteen-year-old Fabianne Geismar lies dead after being shot in the head after looting wall hangings from a destroyed store in Port-au-Prince, Haiti, January 19, 2010. (Photo by Carlos Garcia Rawlins/Reuters) 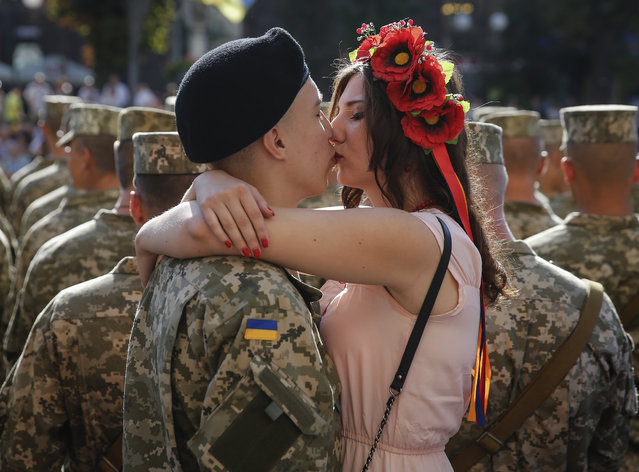 A Ukrainian serviceman gives his girlfriend a kiss at Kiev's Independence Square, Ukraine, 24 August 2015, before a march on the occasion of Independence Day. Ukrainians marked the 24th anniversary of Ukraine's independence from the Soviet Union in 1991. (Photo by Roman Pilipey/EPA) 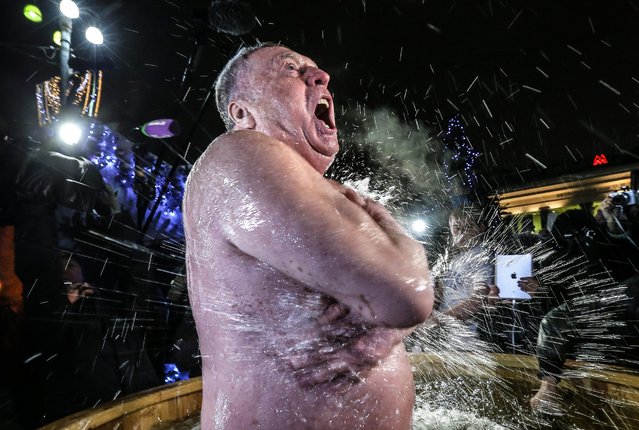 Russian Liberal Democratic Party Leader Vladimir Zhirinovsky dips into a basin of cold water during celebrations of Orthodox Epiphany in Revolution Square. In Eastern Christianity, the feast of Epiphany commemorates the Baptism of Jesus. The Russian Orthodox Church celebrates the holiday according to the Julian calendar. (Photo by Valery Sharifulin/TASS) 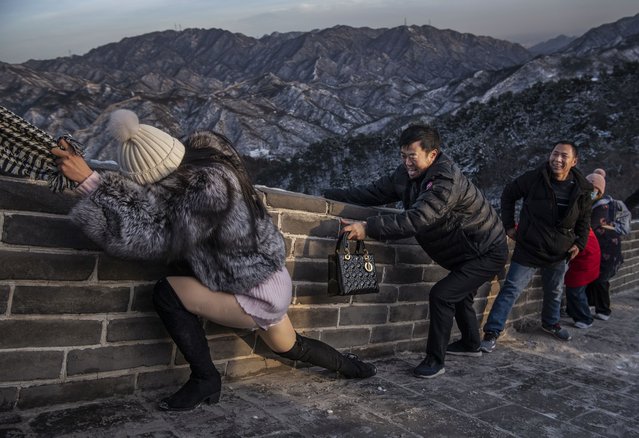 A Chinese tourist uses the scarf of a friend as she is helped while she and others struggle to climb in the wind on an icy section of the Great Wall at Badaling, on a cold day after a snowfall on November 30, 2019 in Beijing, China. (Photo by Kevin Frayer/Getty Images)
Edit Del
10 Dec 2019 00:05:00, post received 0 comments
Publication archive:
←   →
Popular tags:
All tags
Last searches: