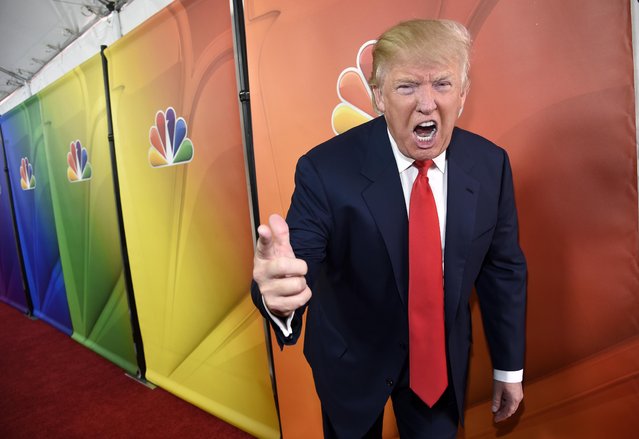 In this January 16, 2015 file photo, Donald Trump, host of the television series “The Celebrity Apprentice”, mugs for photographers at the NBC 2015 Winter TCA Press Tour in Pasadena, Calif. The skyline shimmers, the music pulses and Donald Trump’s helicopter swoops in for a landing. Oozing authority, the billionaire strides purposefully, in slow-motion, for added impact, toward some important matter of business in “New York, my city”, as Trump calls it. Week by week, year by year, 14 seasons of “The Apprentice” or “Celebrity Apprentice” served as a grand homage to all things Trump, running from 2004 to 2015. (Photo by Chris Pizzello/Invision via AP Photo) 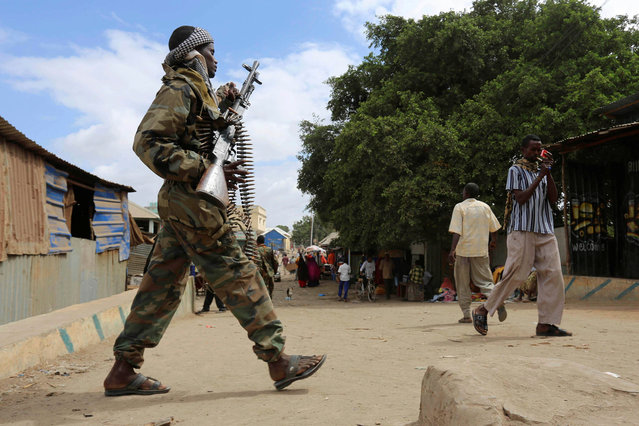 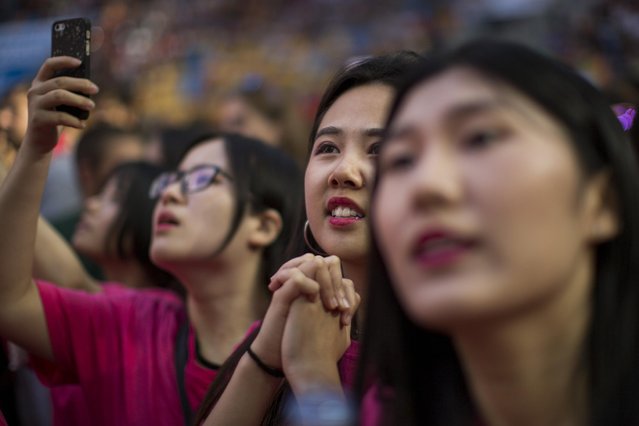 In this Saturday, October 1, 2016 photo, women from Chine react as they look at members of Xiquets de Hangzou making their human tower, during the 26th Human Tower Competition in Tarragona, Spain. (Photo by Emilio Morenatti/AP Photo) 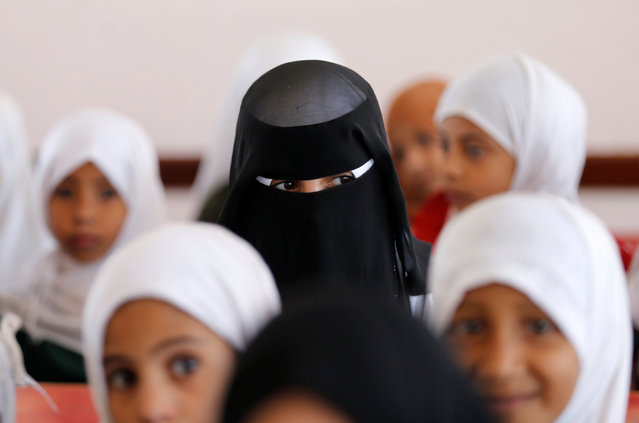 Girls attend a class in their school which was hit by Saudi-led air strikes last year, as schools open this week in Sanaa, the capital of war-torn Yemen October 5, 2016. (Photo by Khaled Abdullah/Reuters) 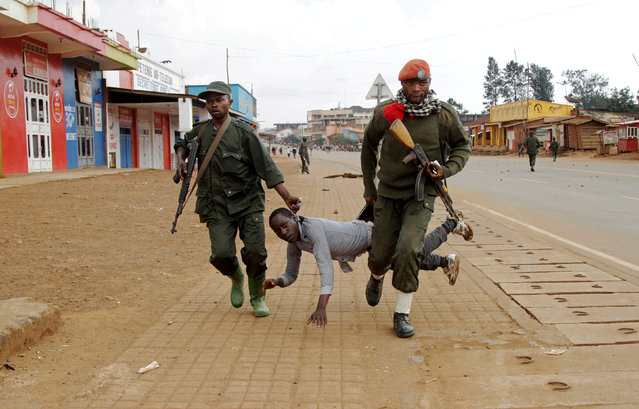 Congolese soldiers arrest a civilian protesting against the government's failure to stop the killings and inter-ethnic tensions in the town of Butembo, in North Kivu province, Democratic Republic of Congo August 24, 2016. (Photo by Kenny Katombe/Reuters) 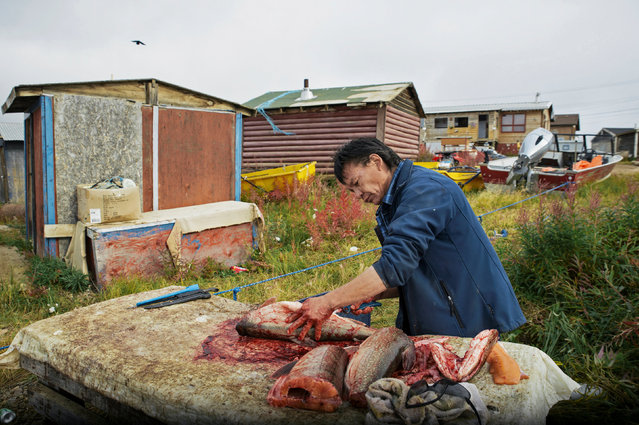 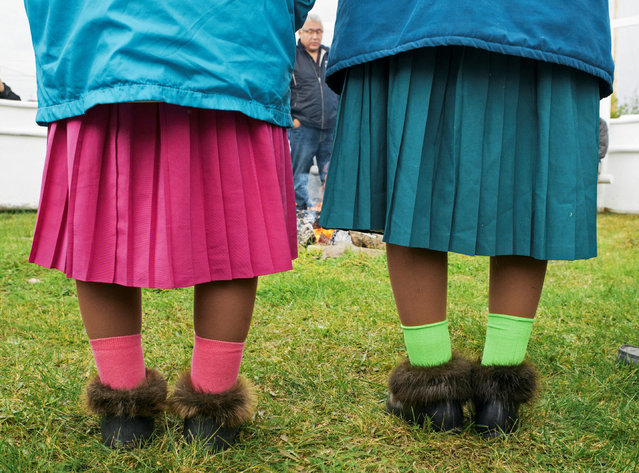 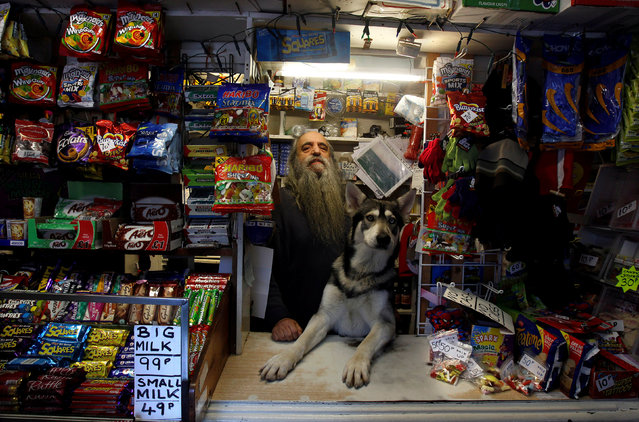 William Mulhall poses for a photograph in his old curiosity shop in the small seaside village of Ardglass in Co.Down, United Kingdom on January 15, 2012. (Photo by Cathal McNaughton/Reuters) 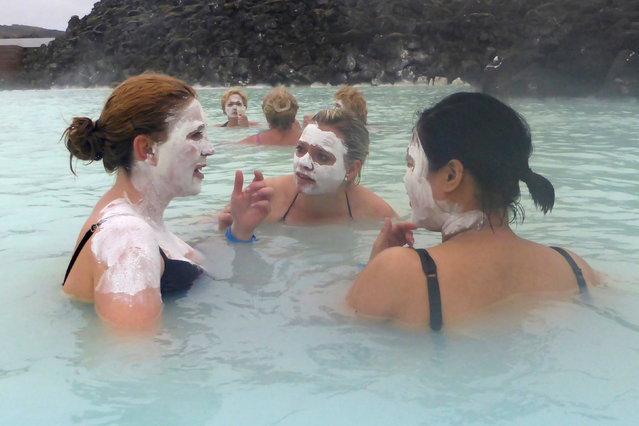 Visitors enjoy a drink in the Blue Lagoon geothermal spa in Grindavik, Iceland, May 25, 2016. (Photo by Gwladys Fouche/Reuters) 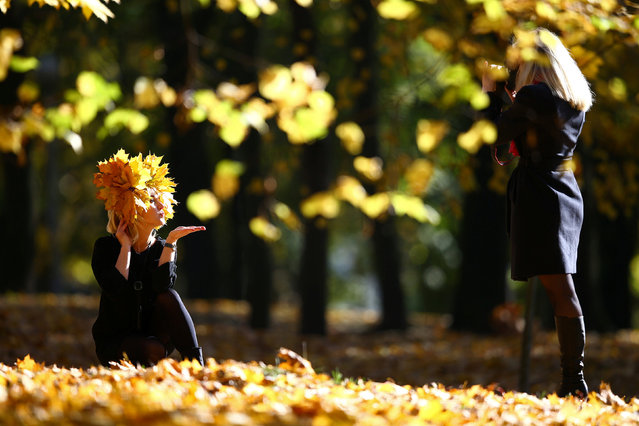 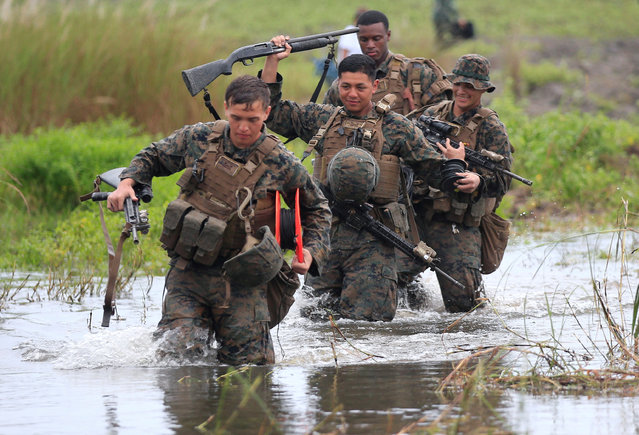 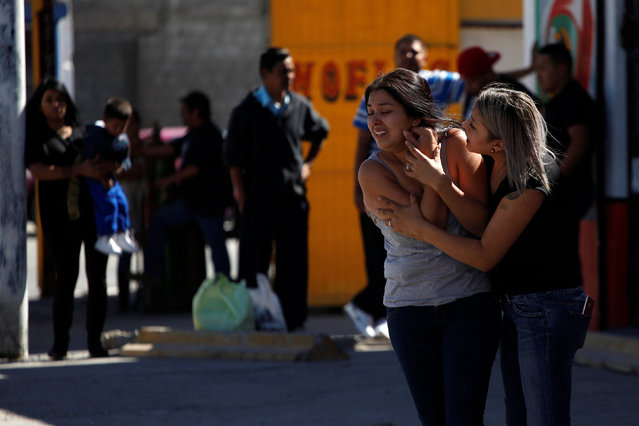 The relative of a man killed at a barbershop reacts at a crime scene in Ciudad Juarez, Mexico, October19, 2016. (Photo by Jose Luis Gonzalez/Reuters) 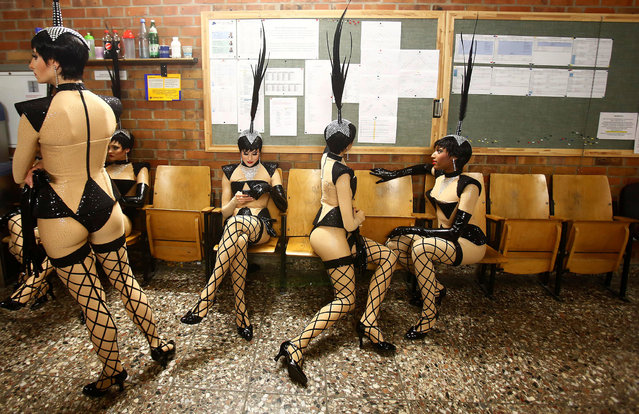 Dancers wait backstage during a dress rehearsal for the new “THE ONE Grand Show” at Friedrichstadt-Palast in Berlin, Germany, September 21, 2016. (Photo by Hannibal Hanschke/Reuters) 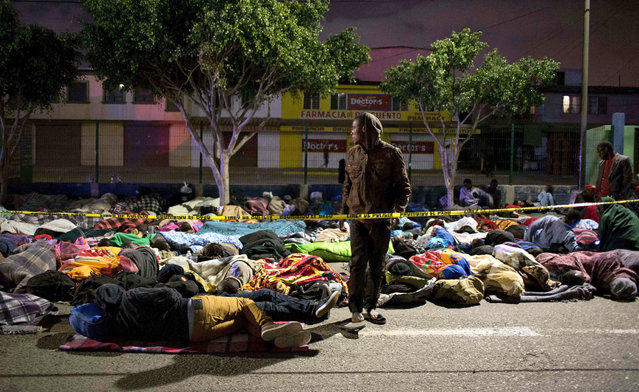 Haitian and African migrants seeking for asylum in the United States, sleep on the street near a Migration office, late on October 2, 2016, in Tijuana, northwestern Mexico. (Photo by Guillermo Arias/AFP Photo) 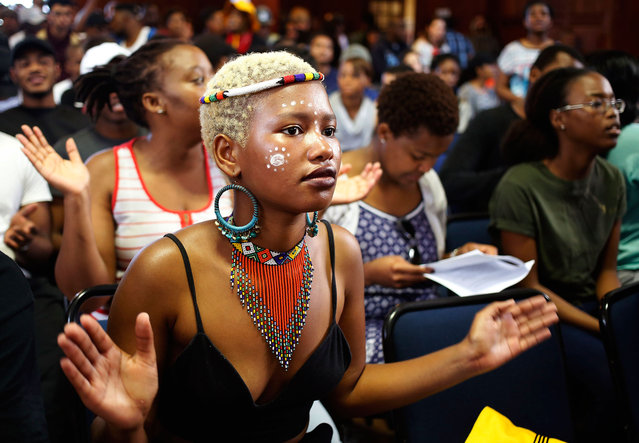 A student from the University of Cape Town claps her hands as she and other students chant and sing as they gather to discuss possible student fee increases at there campus in Cape Town, South Africa, Monday, September 19, 2016. (Photo by Schalk van Zuydam/AP Photo) 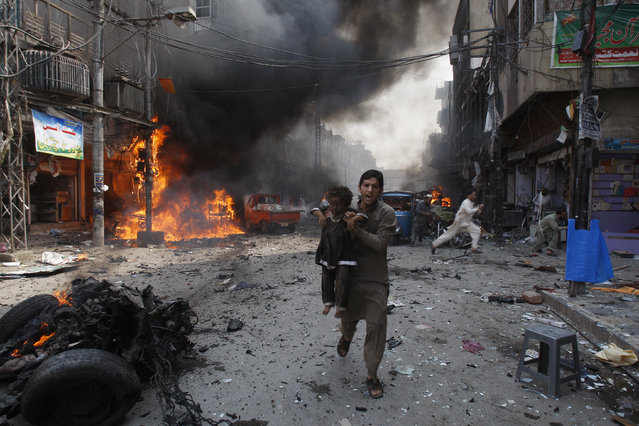 A Pakistani man carrying a child rushes away from the site of a blast shortly after a car exploded in Peshawar, Pakistan, Sunday, September 29, 2013. A car bomb exploded on a crowded street in northwestern Pakistan Sunday, killing scores of people in the third blast to hit the troubled city of Peshawar in a week, officials said. (Photo by Mohammad Sajjad/AP Photo) 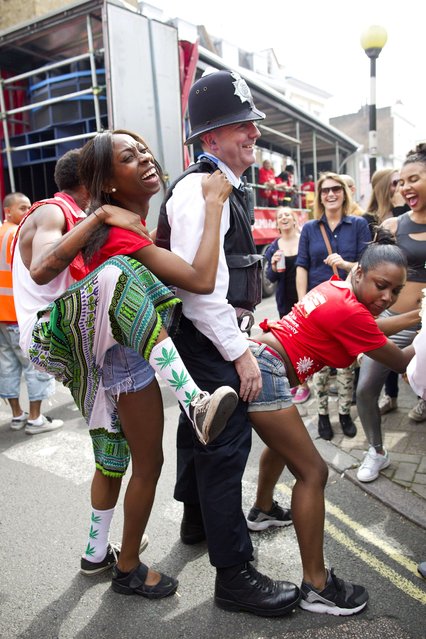 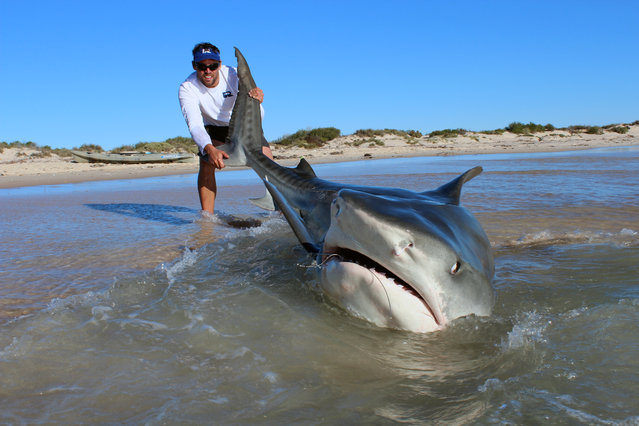 These Aussie fishermen dont need to exaggerate this catch of the day because they landed a massive 14-foot tiger shark on a beach. Angling legends Jethro Bonnitcha, 30, and Joshua Butterworth, 29, managed to hook an impressive 10 tiger sharks in just a four-day fishing trip and they didnt even need a bigger boat. Jethro Jet and Josh, from Esperance, Western Australia, baited lines 300 feet from the beach and waited for the massive predators to take a bite. (Photo by Caters News Agency) 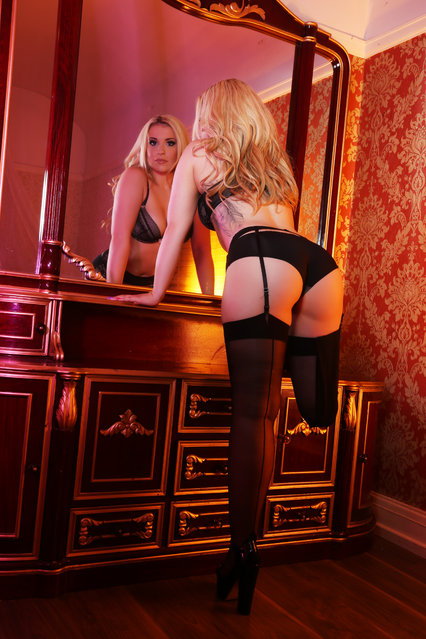 After losing leg when she was involved in a horrific rollercoaster crash just over a year ago – Vicky Balch didn’t think she’d ever feel s*xy again. But that’s all changed for the pretty 21-year-old, who has posed in lingerie for a photoshoot to prove that losing a limb was not going to define her for the rest of her life. Vicky, who had her leg amputated after it was crushed by a carriage on the Alton Towers Smiler in Staffordshire, United Kingdom in June last year, says she has finally got her confidence back. (Photo by Andrewwoodphotography.co.uk/Sunday Mirror) 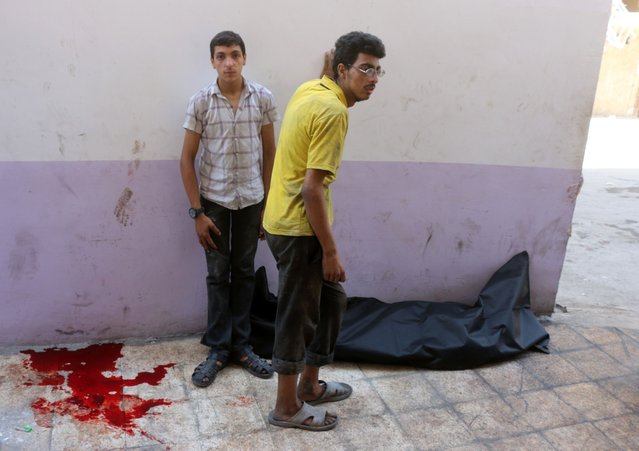 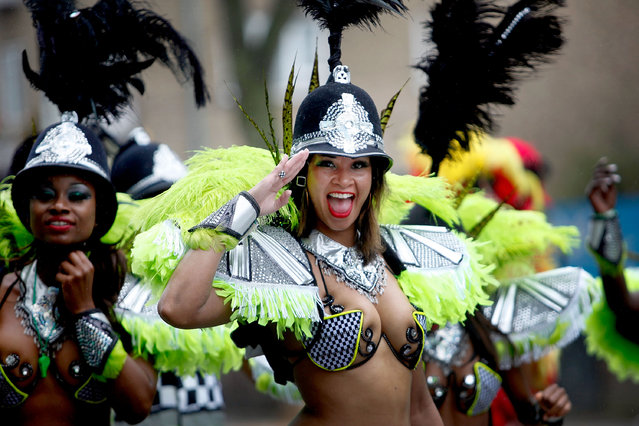 Performers take part in a rain soaked Notting Hill Carnival on August 25th, 2014 in London, England. Despite the bad weather over 1 million visitors are expected to attend the two-day event which is the largest of its kind in Europe. The event has taken place on the West London streets every August Bank Holiday weekend since 1964. (Photo by Mary Turner/Getty Images) 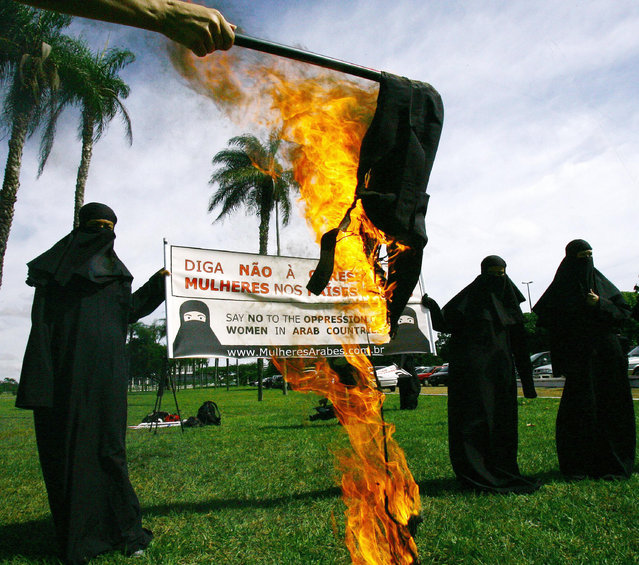 Brazilian women covered from head to toes burn a burka in support of Arabic women 10 May, 2005 in front of the Ulysses Guimaraes Convention Center in Brasilia. The demonstrators, who support the Arabic women's struggle for more freedom and social rights, are delivering a letter of protest to all the delegations attending the South American-Arab Summit in the Brazilian capital. (Photo by AFP Photo) 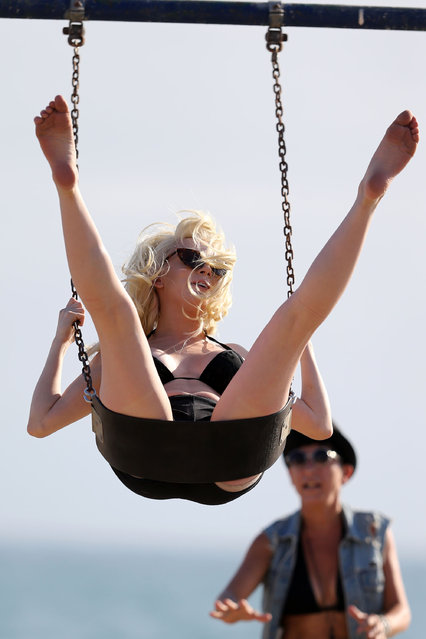 American reality show contestant Courtney Stodden is caught kissing a mystery woman on the beach in Santa Monica, CA on September 16, 2016. Courtney and the mystery brunette couldn't keep their hands of each other and didn't seem to care who saw their antics as they frolicked on the sand. (Photo by Canham/Splash News) 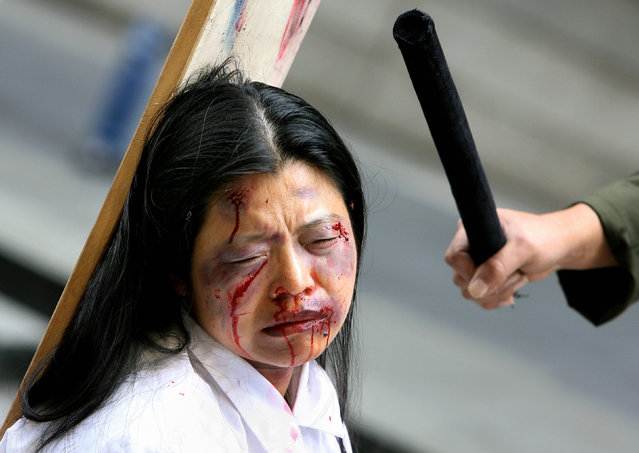 Members of the Falungong religious movement were bringing to the public's attention what they claim is the Chinese government's torture and abuse of their fellow practitioners. The demonstration came as Australia and China signed a landmark nuclear safeguards pact in Canberra, 03 April, in the presence of Chinese Premier Wen Jiabao and his Australian counterpart John Howard. (Photo by Greg Wood/AFP Photo) 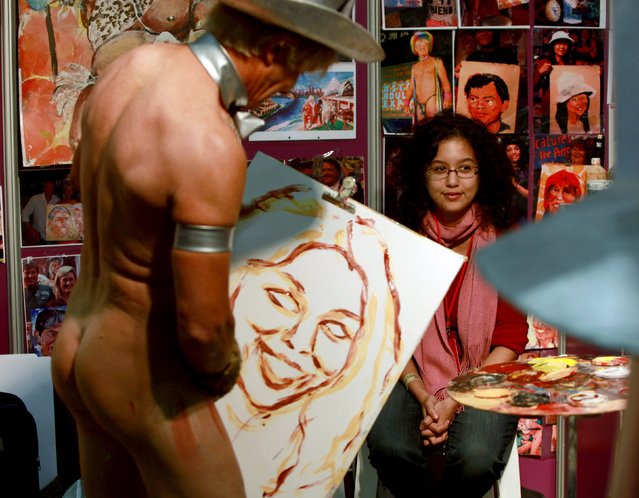 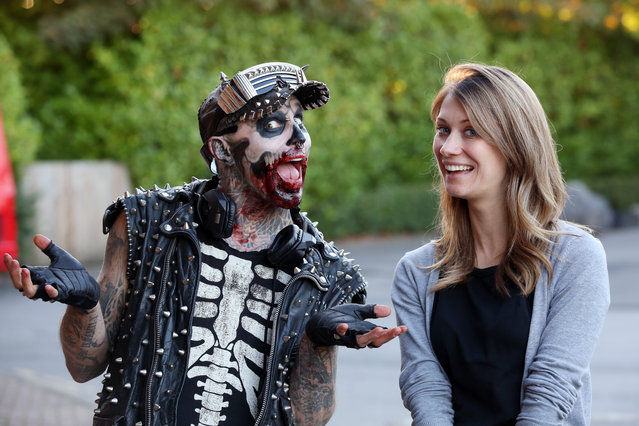