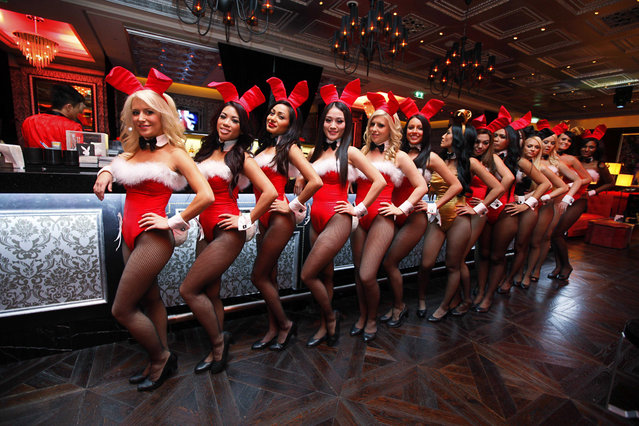 In this December 18, 2010 file photo, waitresses pose inside the Playboy Club at the Sands Casino in Macau. The club closed in 2013. Three decades after the original Playboy Club closed in Manhattan, a new club will debut later this year in a hotel a few blocks from Times Square. (Photo by Kin Cheung/AP Photo) 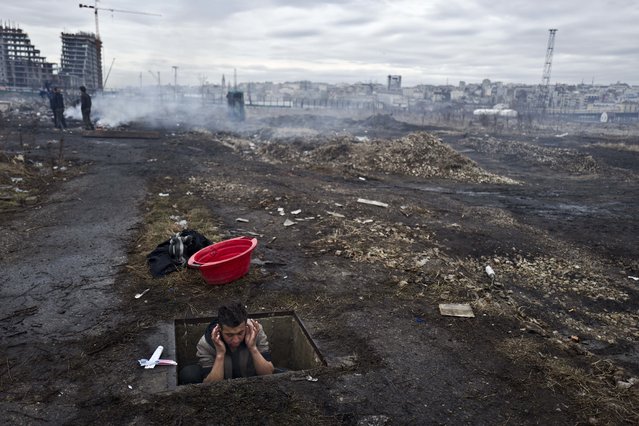 In this Thursday, February 2, 2017 photo, unaccompanied minor Ehsanullah, 14, a migrant from Jalalabad, Afghanistan, washes himself in a hole in the ground outside an old train carriage where he and other migrants took refuge in Belgrade, Serbia. (Photo by Muhammed Muheisen/AP Photo) 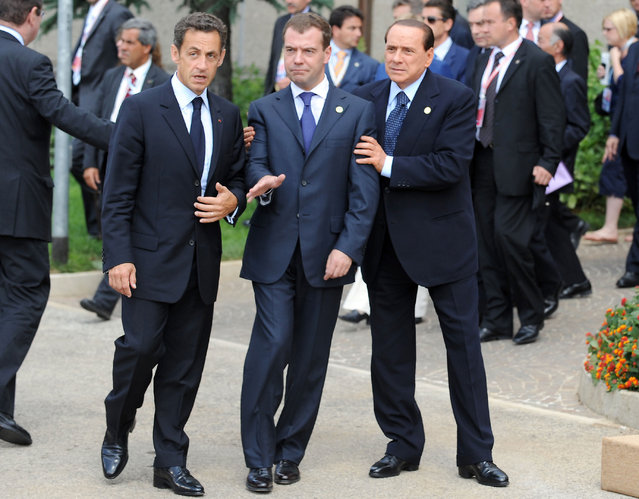 (L to R) French President Nicolas Sarkozy, Russian President Dmitri Medvedev, and Italian Prime Minister Silvio Berlusconi arrive to pose for a family photo at the Group of Eight (G8) summit in L'Aquila, central Italy, on July 8, 2009. Group of Eight leaders kick off talks today on issues ranging from the global financial crisis to climate change to the situations in Iran and Xinjiang, China. (Photo by Peer Grimm/AFP Photo) 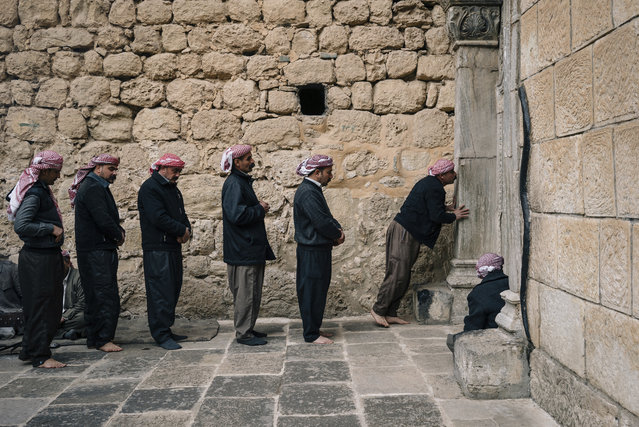 In this January 13, 2017 photo, men stand in line to enter a temple in Lalish, the holiest site of the Yazidi religion, located in the Shekhan district of Nineveh province, Iraq. A new psychological trauma institute is being established at the university of Dohuk in Iraq, the first in the entire region. The program will train local mental health professionals to treat Islamic State victims, including thousands of Yazidi women and children. It will open at the end of the month. (Photo by Alice Martins/AP Photo) 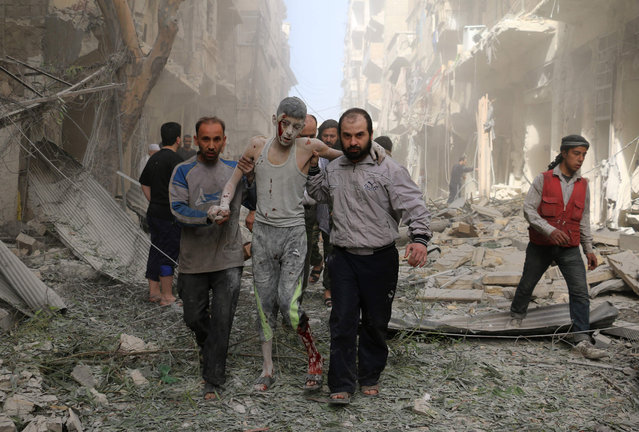 Syrians help a wounded youth following an air strike on the Fardous rebel held neighbourhood of the northern Syrian city of Aleppo on April 26, 2016. (Photo by Ameer Alhalbi/AFP Photo) 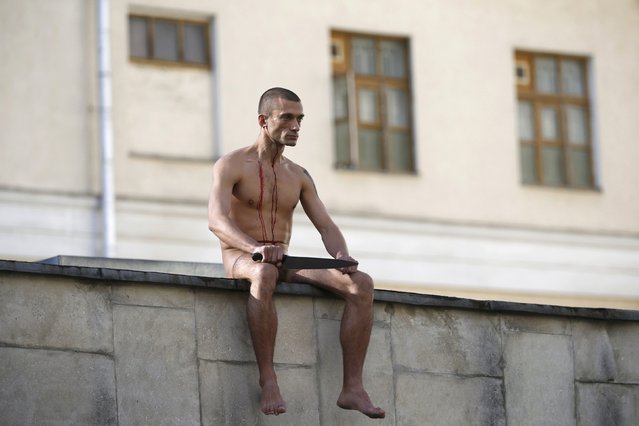 Artist Pyotr Pavlensky sits on the wall enclosing the Serbsky State Scientific Center for Social and Forensic Psychiatry after he cut off a part of his earlobe during his protest action titled “Segregation” in Moscow, Russia, October 19, 2014. (Photo by Maxim Zmeyev/Reuters) 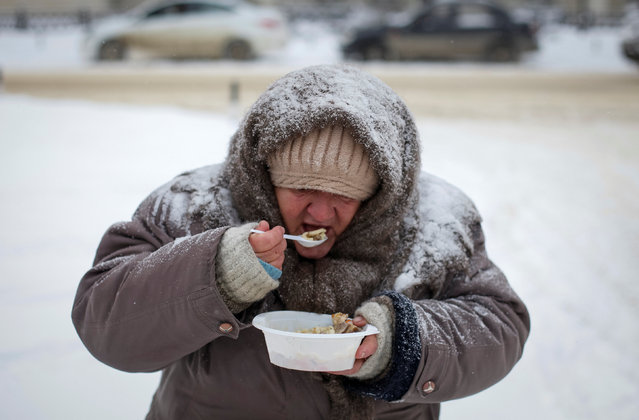 A woman eats during a charity event organised to distribute meals for homeless and poor people near a cathedral in southern city of Stavropol, Russia January 29, 2017. (Photo by Eduard Korniyenko/Reuters) 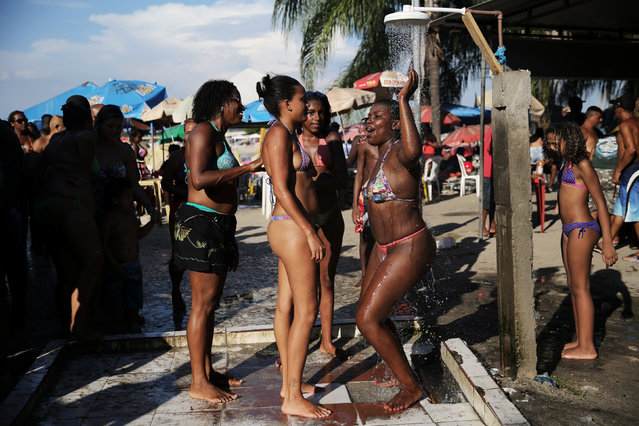 Women shower at an artificial pond known as piscinao, or big pool, in the northern suburbs of Rio de Janeiro, Brazil, January 8, 2017. (Photo by Nacho Doce/Reuters) 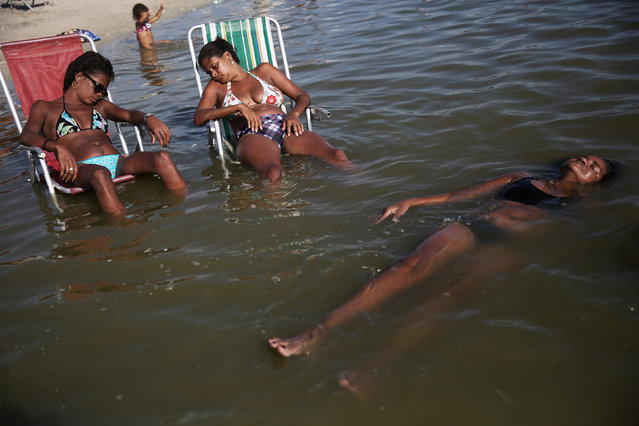 Women relax at an artificial pond known as piscinao, or big pool, in the northern suburbs of Rio de Janeiro, Brazil, January 8, 2017. (Photo by Nacho Doce/Reuters) 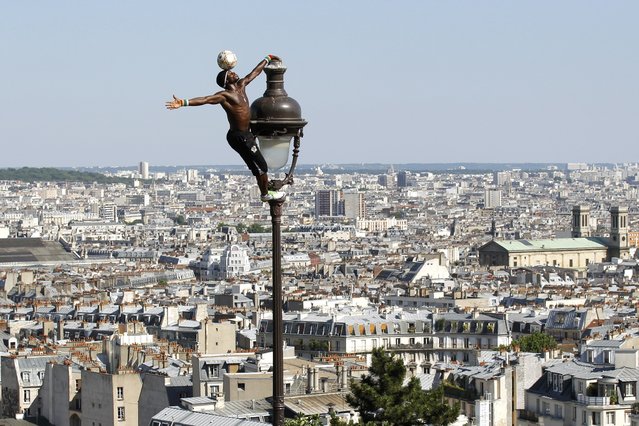 Soccer freestyler Iya Traore from Guinea performs with a ball in the gardens of Montmartre's Sacre Coeur Basilica in Paris, France, one of the Olympics 2024 bid cities, July 4, 2010. (Photo by Benoit Tessier/Reuters) 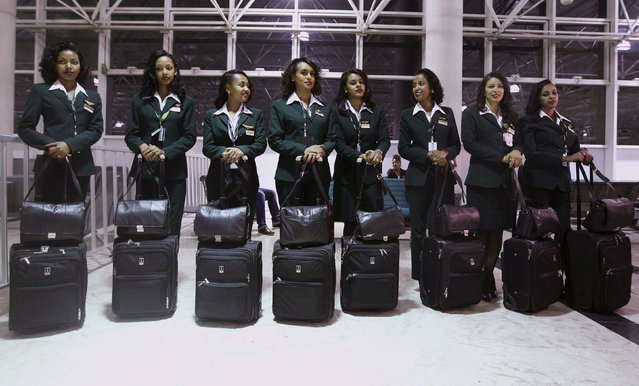 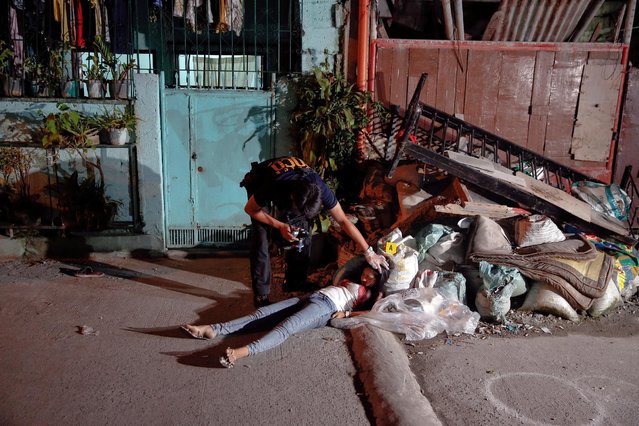 A policeman investigates at the site where a 17 year old girl and a 21 year old man were killed by unknown motorcycle-riding gunmen in an alley in Manila, Philippines early October 26, 2016. According to the police, a sign on a cardboard reading “Tulak ka, hayop ka”, which translates to “You are a (drug) pusher, you are an animal” was found with the the body of the killed man. (Photo by Damir Sagolj/Reuters) 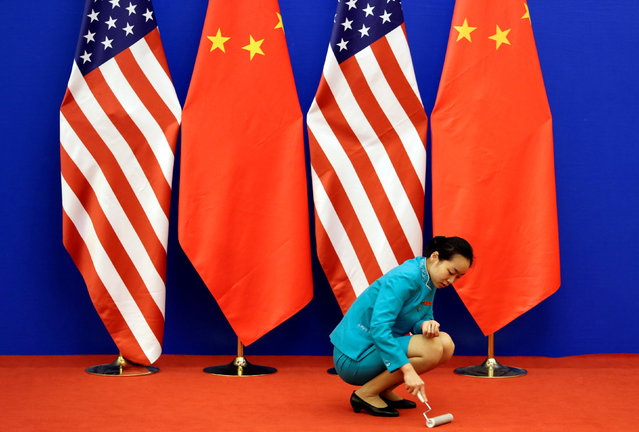 An attendant cleans the carpet next to U.S. and Chinese national flags before a news conference for the 6th round of U.S.-China Strategic and Economic Dialogue at the Great Hall of the People in Beijing, July 10, 2014. (Photo by Jason Lee/Reuters) 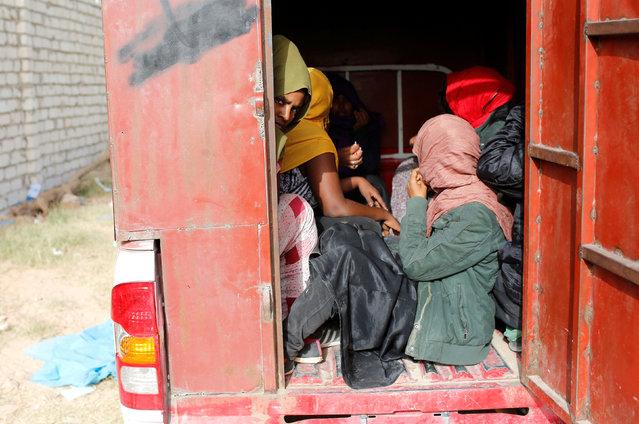 African migrants are transferred to a detention centre after being detained in Zawiya, northern Libya June 1, 2014. (Photo by Ahmed Jadallah/Reuters) 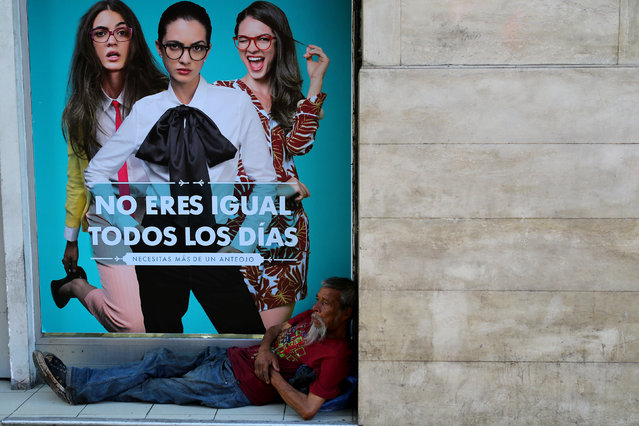 A man rests next to a poster in Santiago, Chile February 21, 2017. (Photo by Ivan Alvarado/Reuters) 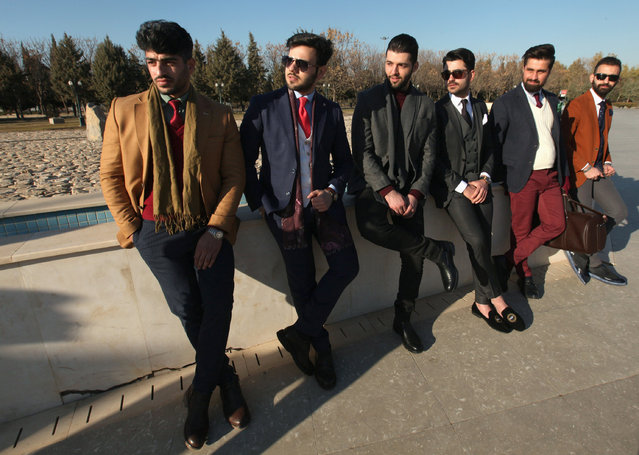 Members of “Mr Erbil”, a group consisting of young fashionable Kurdish men, pose in Erbil, Iraq February 4, 2017. According to its members, Mr Erbil is the first “gentlemen's club” in the region, and members regularly gather for photoshoots wearing outfits to promote the creations of local craftsmen. (Photo by Azad Lashkaril/Reuters) In this February 19, 2017 photo, a couple dances during the “If you don't give me....then you lend me” Carnival street party on Ipanema beach, in Rio de Janeiro, Brazil. The typical view of Carnival in Brazil is anything goes, with no headdress too big, no outfit too small, no song too ribald, but this year some organizers of the world's best known party are drawing the line at lyrics that are sexist, homophobic or racist. (Photo by Silvia Izquierdo/AP Photo) A woman cries near the coffin containing the body of a relative who died at the country's largest prison in Port-au-Prince, Haiti. Tuesday February 21, 2017. Relatives wailed in grief or stared stoically as flowers were placed on 20 caskets at a mass funeral for the latest group of inmates who died miserably in Haiti's largest prison, most without ever having been convicted of any crime. (Photo by Dieu Nalio Chery/AP Photo) In this Tuesday, January 31, 2017 photo, a woman jokingly tries on a mask in the likeness of U.S. President Donald Trump inside a costume store in Sao Paulo, as Brazilian gear up for Carnival. According to the store manager, the new face of the White House is the hottest mask for this year's party. (Photo by Andre Penner/AP Photo) 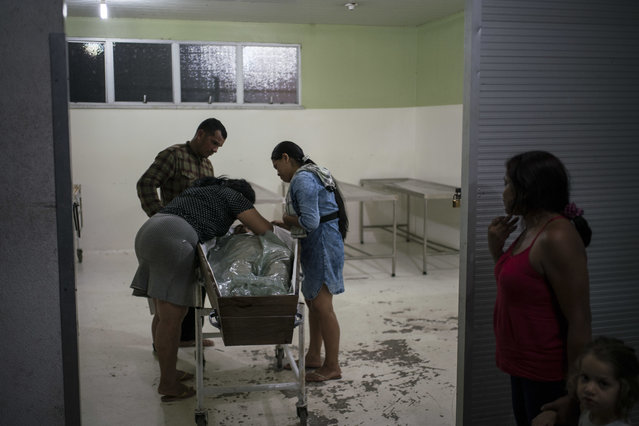 In this February 4, 2017 photo, people mourn the body of a murdered family member in Manaus, Brazil. According to Claudio Lamachia, the head of Brazil's bar association, Brazil's prisons are universities of crime, and from the inside, leaders give orders to commit crimes on the outside, including assasination. (Photo by Felipe Dana/AP Photo) 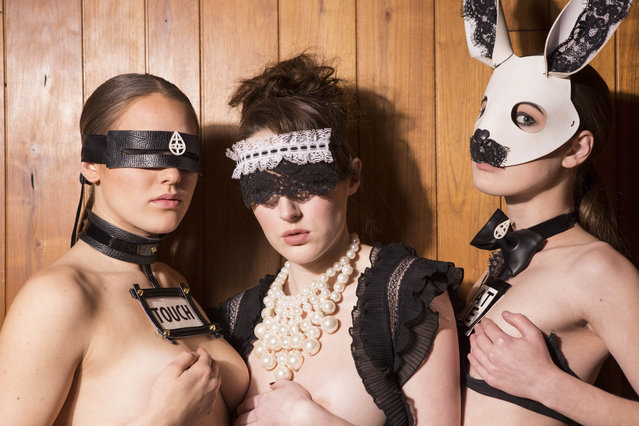 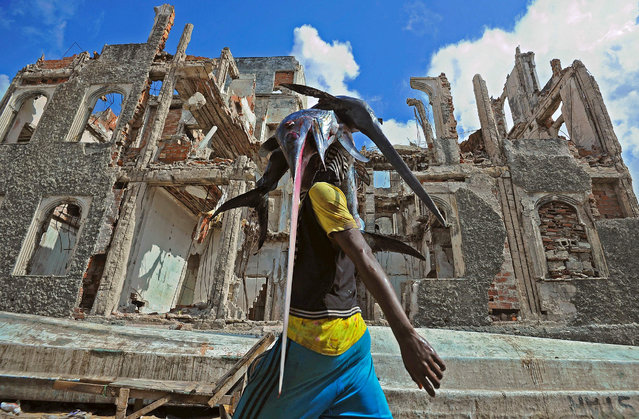 A fisherman carries a sailfish on his head to the fish market in Hamarweyne near the port of Mogadishu on April, 4, 2016. (Photo by Mohamed Abdiwahab/AFP Photo)
Edit Del
24 Feb 2017 00:06:00, post received 0 comments
Publication archive:
←   →
Popular tags:
All tags
Last searches: