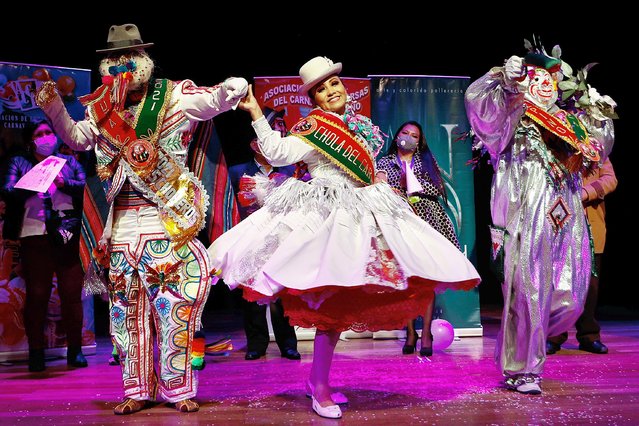 Contest winners celebrate at the end of a competition where they were selected as this year's Carnival characters: Pepino, right, Chola, center, and Chuta, all of whom represent gaiety in La Paz, Bolivia, Monday, February 8, 2021. The winning trio of Carnival must be adept at spreading happiness and never tire of dancing, however due to the COVID-19 pandemic, their performances will be broadcast online, and parades have also been canceled. (Photo by Juan Karita/AP Photo) 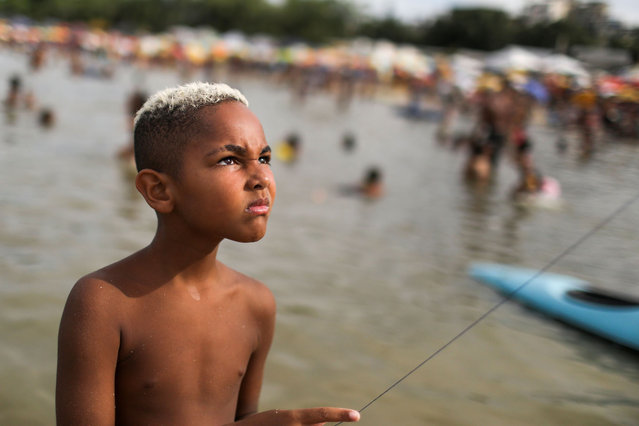 A boy flies a kite at an artificial pond known as Piscinao de Ramos, or big pool, amid the coronavirus disease (COVID-19) outbreak, in the northern suburbs of Rio de Janeiro, Brazil on January 31, 2021. (Photo by Pilar Olivares/Reuters) 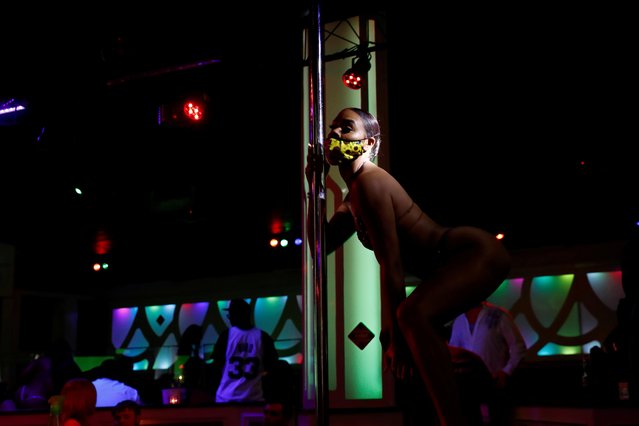 A female dancer wears a protective face mask while on stage ahead of the Tampa Bay area weekend NFL' Super Bowl LV amid the ongoing spread of the coronavirus disease (COVID-19) at the Oz Ladies' & Gentlemen's Nightclub in Clearwater, Florida, February 4, 2021. (Photo by Shannon Stapleton/Reuters) 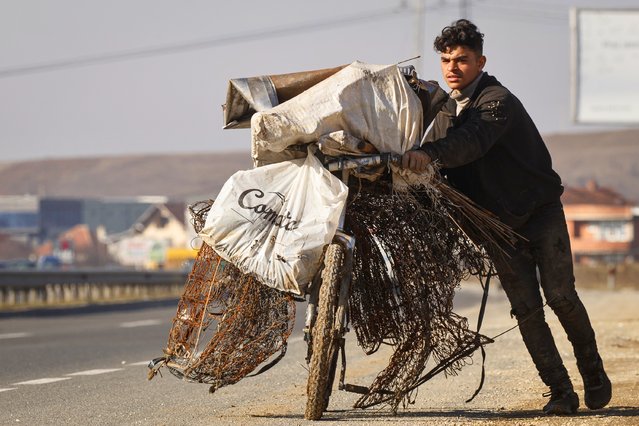 A Roma boy pushes his bicycle filled with iron scrap near the town of Obilic, Kosovo, 05 February 2021. (Photo by Valdrin Xhemaj/EPA/EFE) 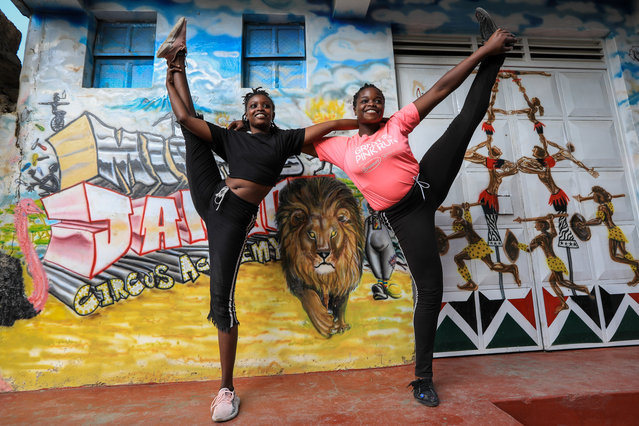 Kenyan acrobatic members of the Mighty Jambo Circus Academy pose for a photo at the entrance after their training routine at the academy in Nairobi, Kenya, 13 January 2021. (Photo by Daniel Irungu/EPA/EFE) 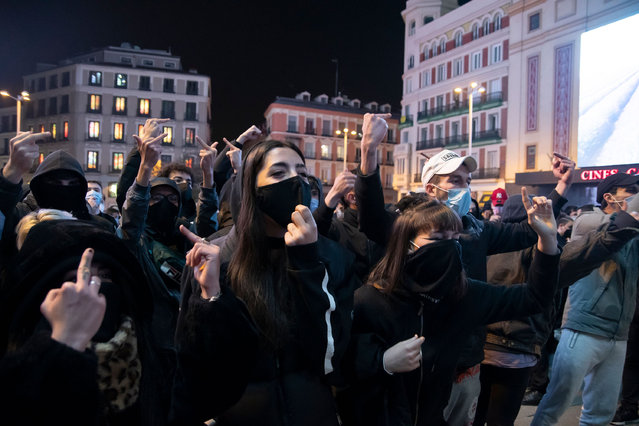 A hundred people have gathered around 7:00 p.m. in the central Plaza de Callao in Madrid on February 20, 2021 to demonstrate against the imprisonment of rapper Pablo Hasél. A device of 300 National Police officers have shielded the area to prevent violent altercations. (Photo by Alberto Sibaja/Pacific Press/Rex Features/Shutterstock) 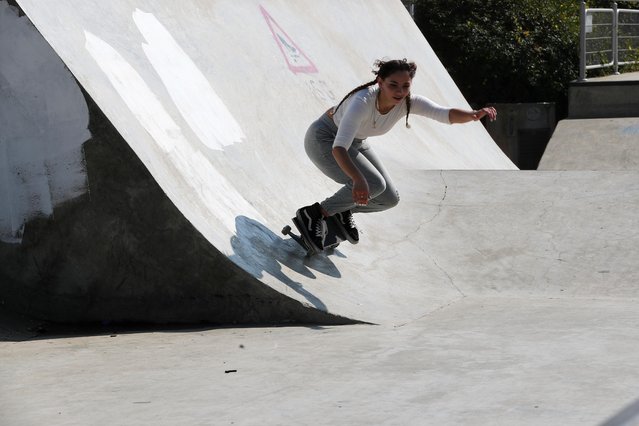 A Palestinian youth skateboards as Israel partially lifts its third national lockdown at a skate park in Jerusalem on February 7, 2021. (Photo by Ammar Awad/Reuters)

A man plays a violin during a protest after a police officer shot dead a street performer in the southern area of Panguipulli, in Concepcion, Chile, February 6, 2021. (Photo by Jose LuÌs Saavedra/Reuters)

A friend attends the funeral of Deiner Castillo, 20, a young artist murdered on February 8 by armed men, in Buenaventura, Colombia, on February 10, 2021. Since December, 2020, Buenaventura has been suffering a blood and fire dispute between members of the La Local armed group, which split into two substructures known as Shotas and Espartanos, that are now facing each other to death for the control of drug trafficking. (Photo by Luis Robayo/AFP Photo) 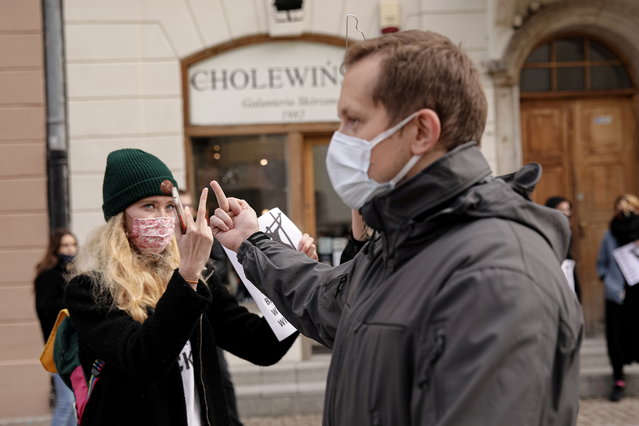 A protester against the ruling by Poland's Constitutional Tribunal, that imposes a near-total ban on abortion, and her opponent make obscene gestures during a rally in Warsaw, Poland on October 25, 2020. (Photo by Dawid Zuchowicz/Agencja Gazeta via Reuters) 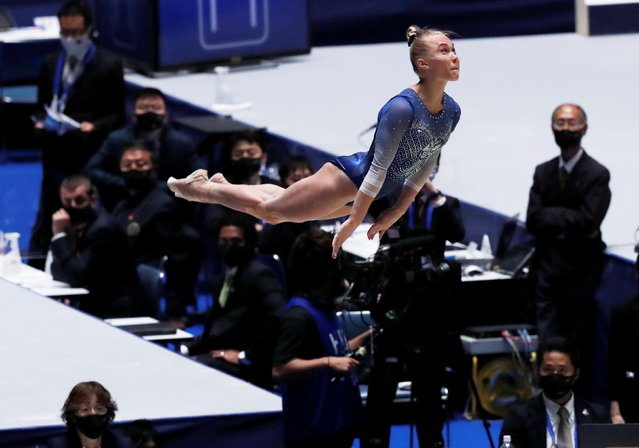 Russia's Angelina Melnikova performs on the floor at Friendship and Solidarity Competition, the first international event at a Tokyo Olympic venue since the Games were postponed in March due to the COVID-19 pandemic, in Tokyo, Japan on November 8, 2020. (Photo by Kim Kyung-Hoon/Reuters) 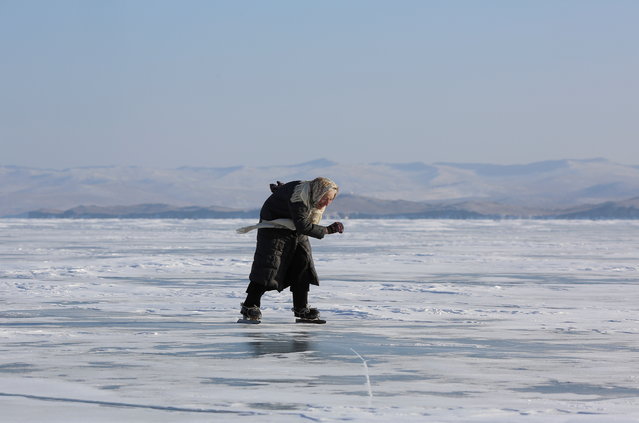 Lyubov Morekhodova, aged 79, skates on ice-covered Lake Baikal in Irkutsk Region, Russia on January 29, 2021. Lyubov, who runs the house on the lakeside near remote villages of Irkutsk Region, learnt to skate in her early childhood and then was committed to this hobby throughout the course of her life. (Photo by Yuri Novikov/Reuters) 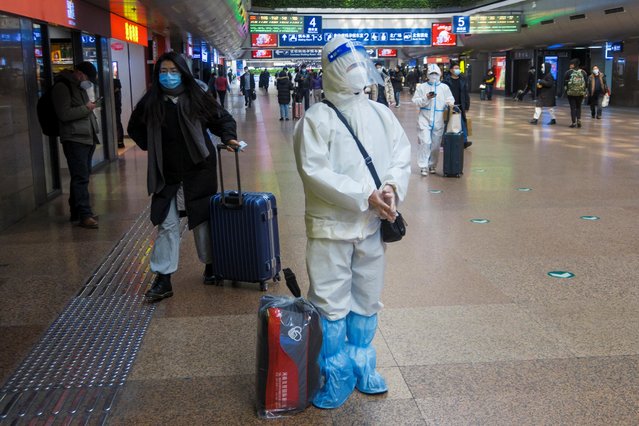 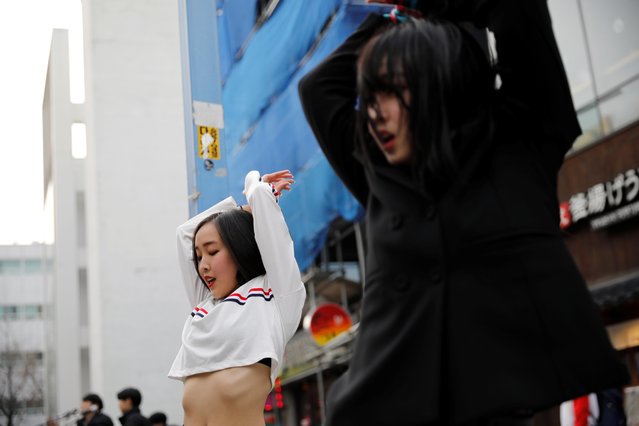 Japanese Yuuka Hasumi, 17, and Ibuki Ito, 17, also from Japan, who want to become K-pop stars, perform during their street performance in Hongdae area of Seoul, South Korea, March 21, 2019. Hasumi put high school in Japan on hold and flew to South Korea in February to try her chances at becoming a K-pop star, even if that means long hours of vocal and dance training, no privacy, no boyfriend, and even no phone. “It is tough”, Hasumi said. “Going through a strict training and taking my skill to a higher level to a perfect stage, I think that's when it is good to make a debut”. (Photo by Kim Hong-Ji/Reuters)
Edit Del
28 Feb 2021 10:09:00, post received 0 comments
Publication archive:
←   →
Popular tags:
All tags
Last searches: