Fact Simply Some Photos: In Motion A young woman swings into the refreshing water of the Alatsee lake near Fuessen, southern Germany, on August 2, 2015. (Photo by Karl-Josef Hildenbrand/AFP Photo) 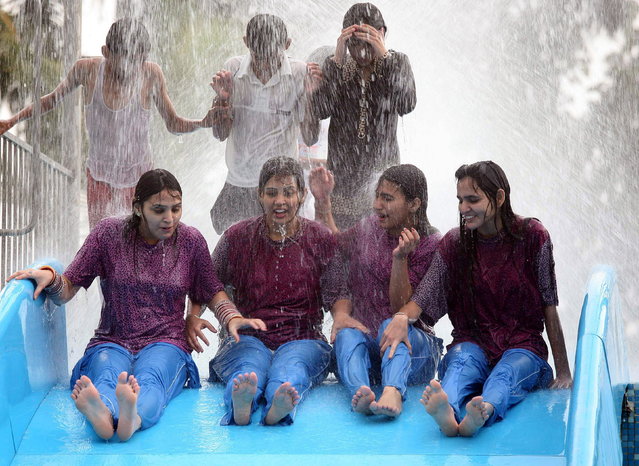 Young girls play in a water park to get respite from the humid and hot atmosphere in Bhopal, India, 07 June 2012. (Photo by Sanjeev Gupta/EPA) 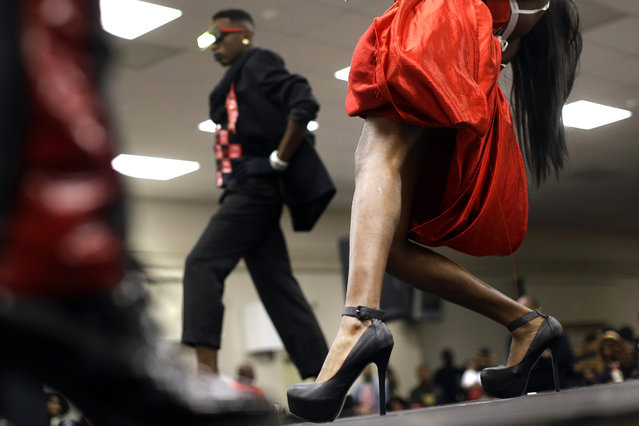 In this November 15, 2014 photo, a group of performers competes during a vogue ball in Baltimore, where the city's health department hosts the annual event as part of an HIV outreach and education effort. At vogue balls, winners walk away with trophies and almost always a cash prize. The health department's ball is no different, except it serves an added purpose: to encourage and enable the people to get tested for HIV and other sexually transmitted infections. (Photo by Patrick Semansky/AP Photo) 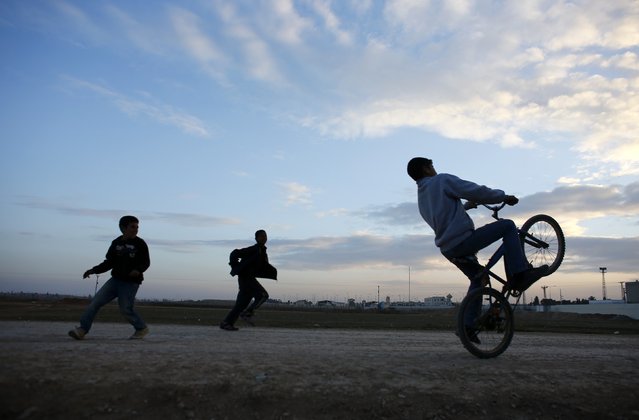 Children play near the Akcakale border gate in Sanliurfa province, southeastern Turkey, where Islamic State militants control the Syrian side of the gate, January 29, 2015. (Photo by Osman Orsal/Reuters) 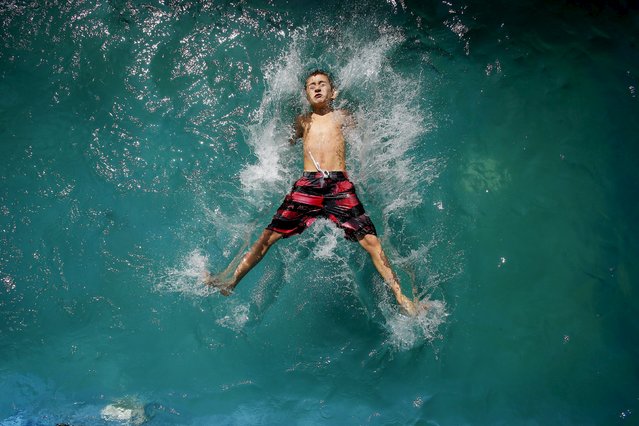 A child plays in a pool during a warm sunny day in Santiago, March 22, 2015. (Photo by Ivan Alvarado/Reuters) 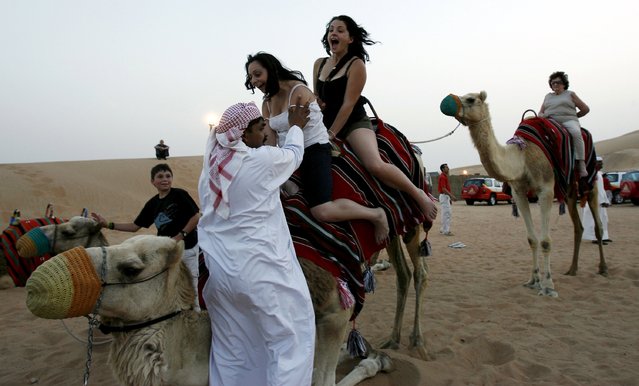 A keeper helps tourists dismount from a camel in the Dubai desert April 10, 2007 file photo. (Photo by Ahmed Jadallah/Reuters) 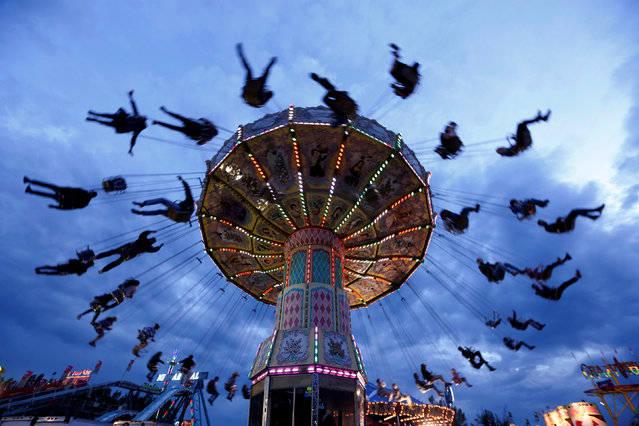 People swing on a ride in the midway during the Calgary Stampede in Calgary, Alberta, Canada July 14, 2016. (Photo by Todd Korol/Reuters) 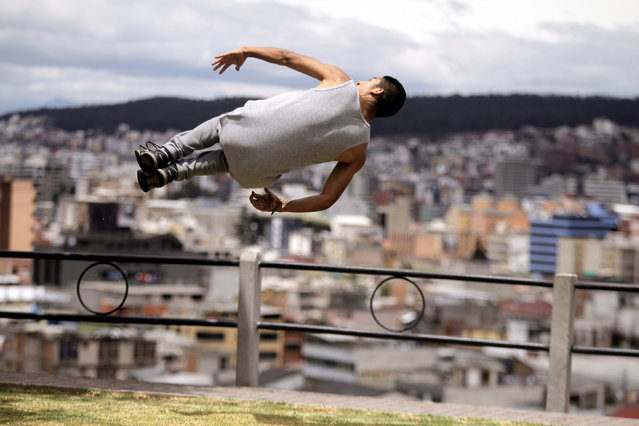 Daniel Macas a parkour practitioner rolls over in the air at a park in Quito, September 25, 2016. (Photo by Kevin Granja/Reuters) 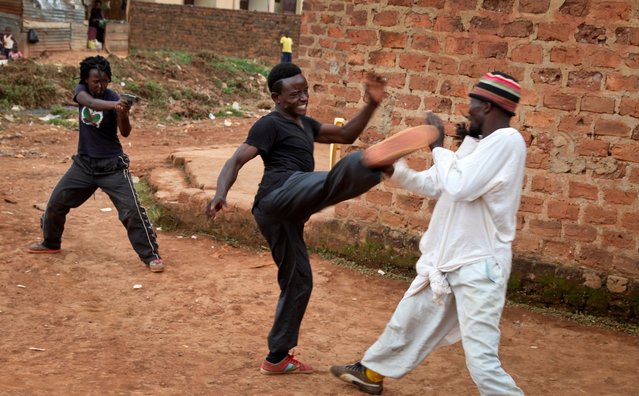 In this photo taken Wednesday, September 7, 2016, actors rehearse at the “Wakaliwood” studios in the Wakaliga slum of Kampala, Uganda. Deep in this Kampala slum at a tin-roofed collection of houses known as Wakaliwood, is the engine of Uganda's tiny film industry and the source of $200-budget movies and a glimmer of fame. (Photo by Stephen Wandera/AP Photo) 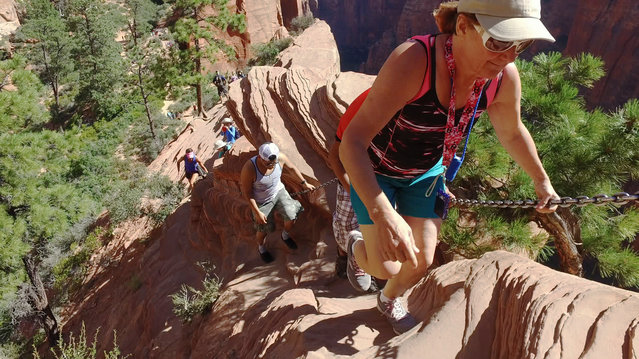 Hikers ascend Angels Landing, one of the most popular trails in Zion National Park, Utah on July 30, 2016. The 5.4 mile round-trip trail features 1,500 foot drop-offs and breathtaking views of Zion Canyon, but is not for the feint of heart, or those afraid of heights. (Photo by Jim Seida/NBC News) 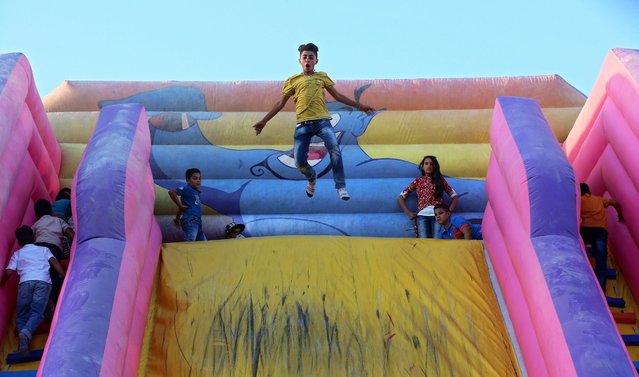 Jordanian kids playing on a slider during the Eid celebration in Amman, Jordan, 12 September 2016. Eid al-Adha is the holiest of the two Muslims holidays celebrated each year, it marks the yearly Muslim pilgrimage (Hajj) to visit Mecca, the holiest place in Islam. Muslims slaughter a sacrificial animal and split the meat into three parts, one for the family, one for friends and relatives, and one for the poor and needy. (Photo by Jamal Nasrallah/EPA) 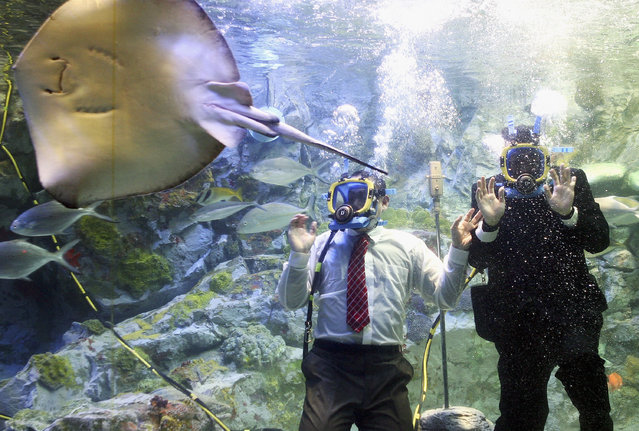 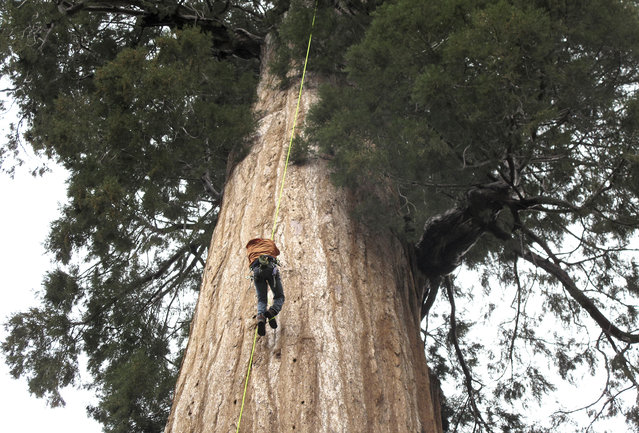 In this May 23, 2016 photo, arborist Jim Clark inches up a giant sequoia to collect new growth from its canopy in the southern Sierra Nevada near Camp Nelson, Calif. Clark volunteers with Archangel Ancient Tree Archive, a nonprofit group that collects genetic samples from ancient trees and clones them in a lab to be planted in the forest. The group believes the giant sequoias and costal redwoods are blessed with some of the heartiest genetics of any trees on earth and that propagating them will help reverse climate change. (Photo by Scott Smith/AP Photo) 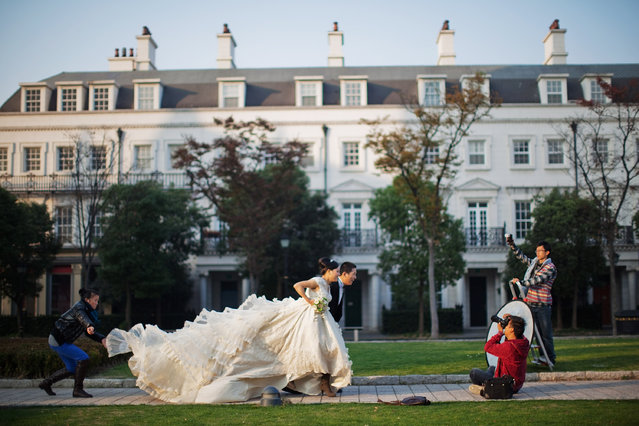 Chinese newlyweds pose for wedding photographs near to the Thames Town Church in Thames Town on November 19, 2010 in Songjiang, China. Chinese wedding couples gather daily to have their wedding portraits taken in the themed Chinese town. “Thames Town” is the English name for a town in Songjiang, 35 km from central Shanghai, China and situated on the Yangtze River. It is named after the River Thames in England. The architecture both imitates and is influenced by classic English market town styles. (Photo by Daniel Berehulak/Getty Images) 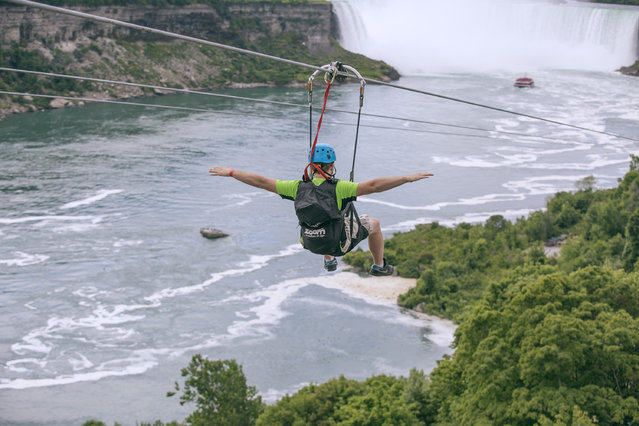 In this July 19, 2016 photo provided by WildPlay Ltd., a tourist suspended above the water from zip lines makes his way at speeds of up to 40 mph toward the the mist of the Horseshoe Falls, on the Ontario side of Niagara Falls. The overhead cables have evolved from a fun way to explore jungle canopies to trendy additions for long-established outdoor destinations. (Photo by Kien Tran/WildPlay Ltd. via AP Photo) 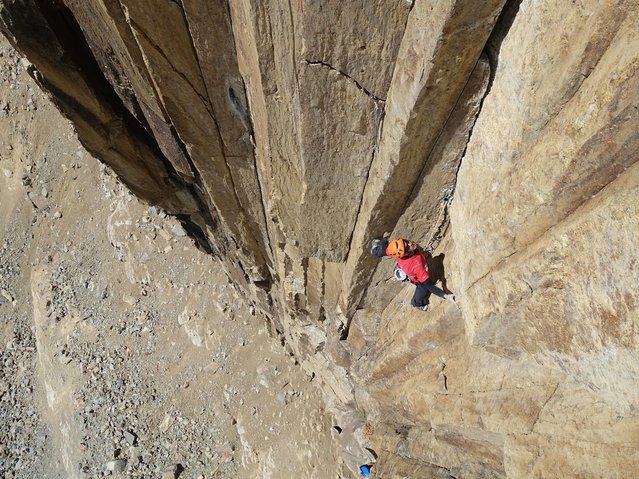 Handout picture released by France's High Mountain Military Group (GMHM ) on September 10, 2016 showing members of the GMHM climbing the Puscanturpa mountain, in the Cordillera Huayhuash in the Peruvian Andes. The expedition managed to open a couple of new climbing routes and got to the top of the Siula Grande mountain – by its eastern side – at 6,344m above sea level. (Photo by AFP Photo/Groupe Militaire de Haute Montagne) 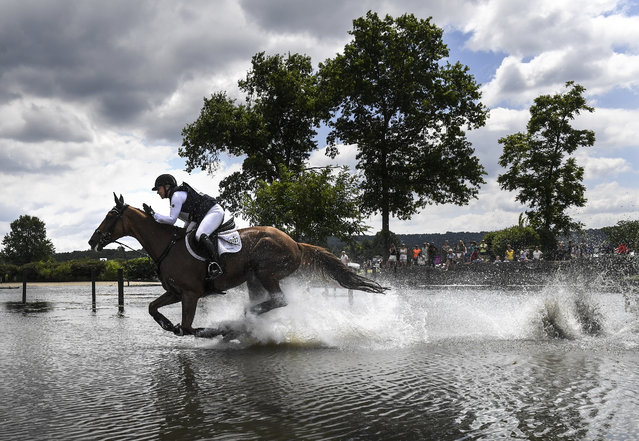 Marilyn Little, riding RF Demeter, pats her horse as they take off after complete a pair of water jumps during the cross country portion of the Land Rover Great Meadow Invitational on Sunday, July 10, 2016. (Photo by Toni L. Sandys/The Washington Post) 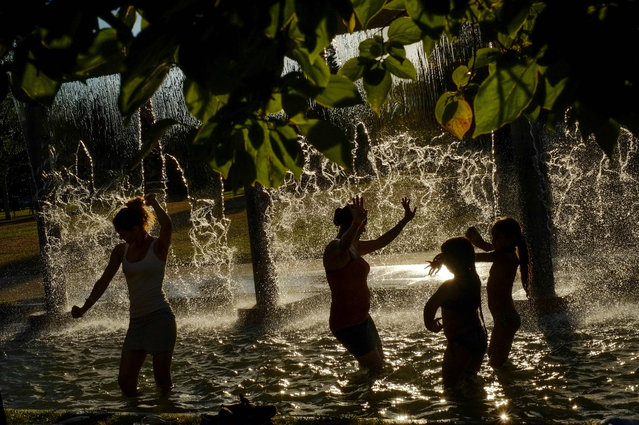 People cool off in a fountain on a hot summer day, in Pamplona northern Spain, Wednesday, August 24, 2016. (Photo by Alvaro Barrientos/AP Photo) 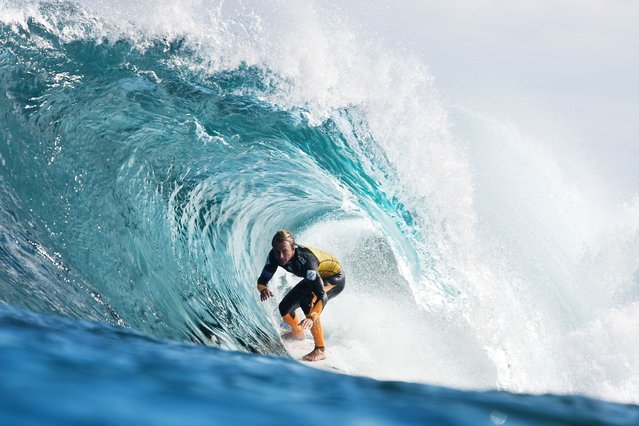 Josh Kerr of Australia advanced into the Quarterfinals of the Drug Aware Margaret River Pro after winning his Round 5 heat at The Box on April 10, 2014 in Margaret River, Australia. (Photo by 2014 Kelly Cestari) 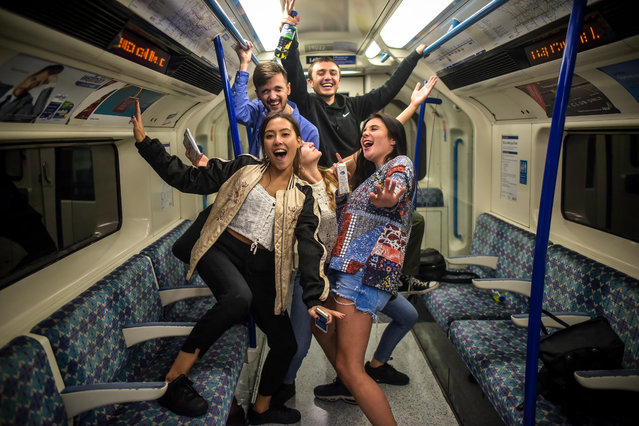 A group of people are seen on a Victoria line train in London, England during the first night of the Night Tube service on August 19 2016. The Central line and Victoria line are the first to operate a Night service with further lines expected to be running by the end of the year. (Photo by SWNS.com)
Edit Del
28 Sep 2016 11:25:00, post received 0 comments
Publication archive:
←   →
Popular tags:
All tags
Last searches: