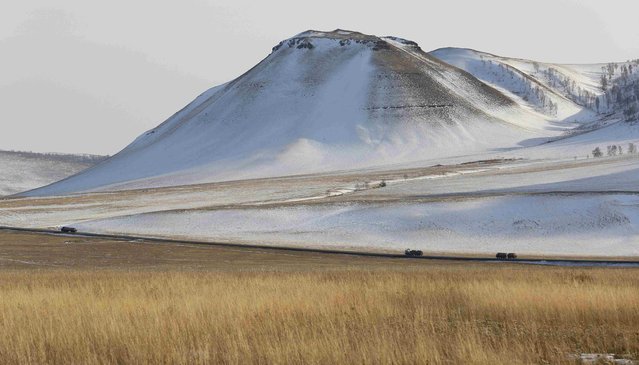 Trucks drive along the M54 federal highway in the steppe area north of Abakan in the Republic of Khakassia, Russia, March 14, 2017. (Photo by Ilya Naymushin/Reuters) 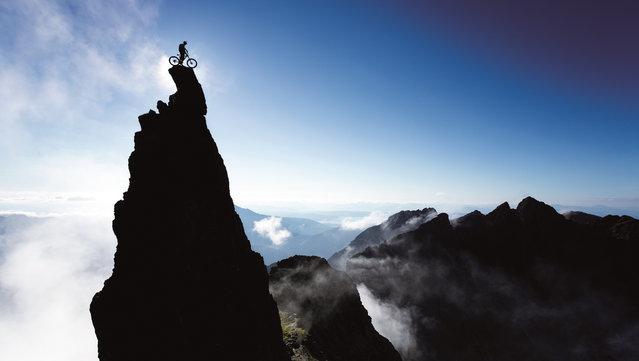 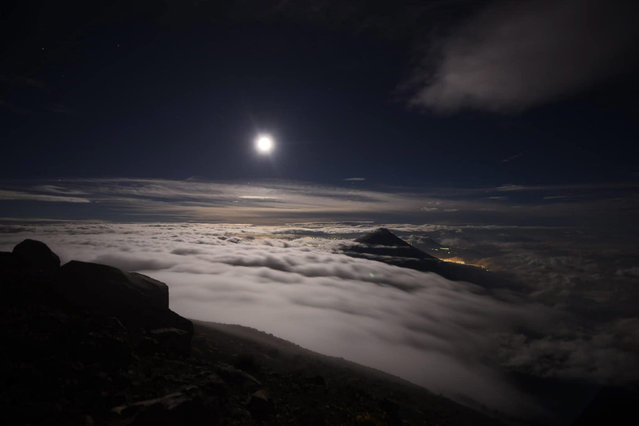 A view of the full moon over Volcan de Fuego (Volcano of Fire) Volcano, in Chimaltenango, Guatemala, 14 November 2016. The moon is the largest full moon since 1948, also known as the “supermoon”, when the moon reaches its closest point to Earth. The next time the moon will be this close will be on 25 November 2034. (Photo by Santiago Billy/EPA) 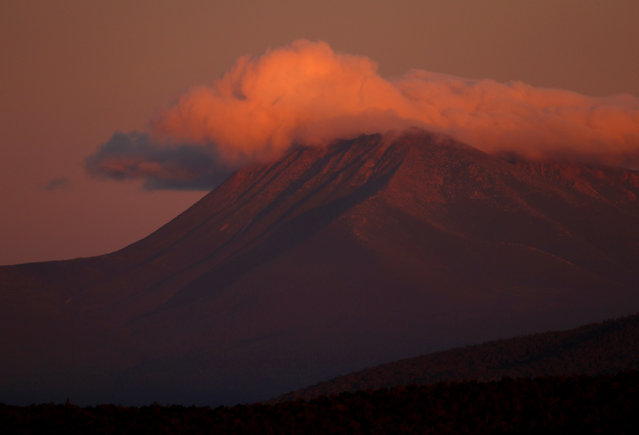 In this Monday, August 7, 2017 photo, the first rays of sunlight color the clouds over Mount Katahdin in this view from the Katahdin Woods and Waters Scenic Byway outside Patten, Maine. Interior Secretary Ryan Zinke wants to retain the newly created national monument, but said he might recommend adjustments to the White House on Thursday, Aug. 24, 2017. (Photo by Robert F. Bukaty/AP Photo) 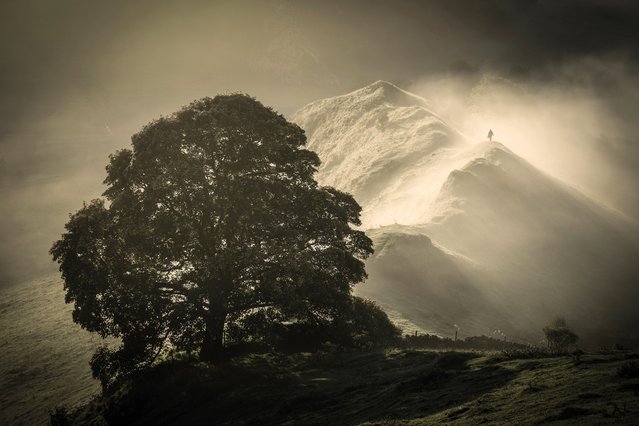 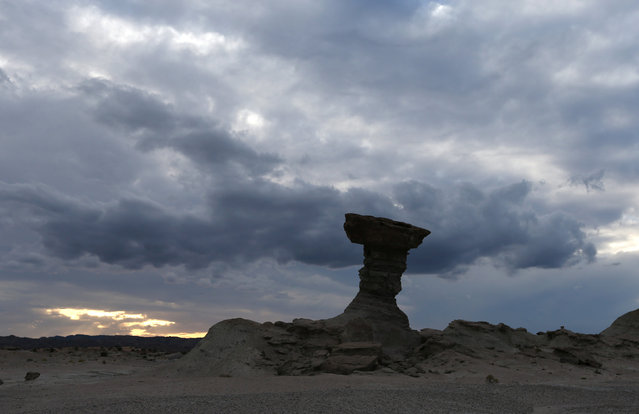 A view of the rock formation called “The Mushroom” in the Valle de la Luna (Moon Valley) in the Ischigualasto Provincial Park, in San Juan, Argentina November 13, 2016. (Photo by Enrique Marcarian/Reuters) 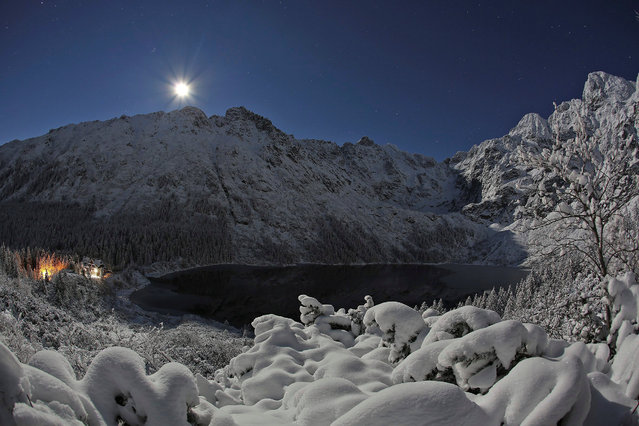 The supermoon is seen over Lake Morskie Oko in the Tatra Mountains near Zakopane, Poland November 14, 2016. (Photo by Marek Podmokly/Reuters/Agencja Gazeta) 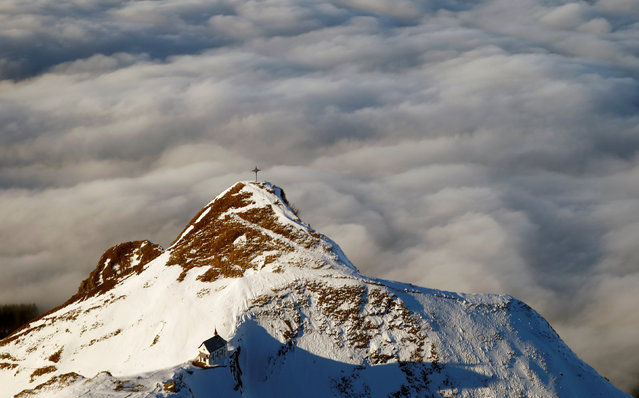 A view shows the Klimsen-Kapelle church in front of the peak of mount Klimsenhorn (1,907 m /6,257 ft above sea level) over the clouds near Hergiswil, Switzerland November 18, 2017. (Photo by Arnd Wiegmann/Reuters) 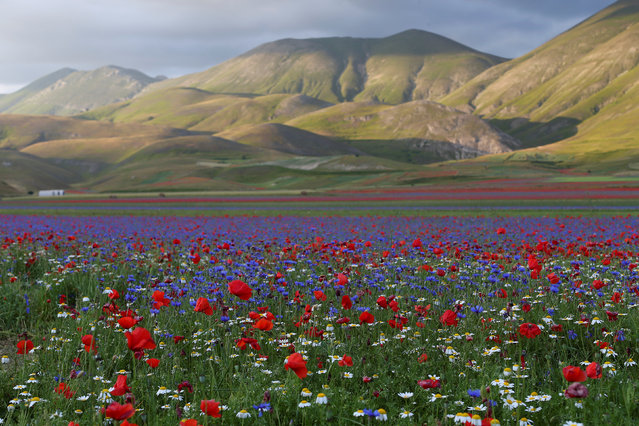 A view of fields of flowers in Castelluccio di Norcia near Perugia, Italy, July 12, 2018. (Photo by Alessandro Bianchi/Reuters) 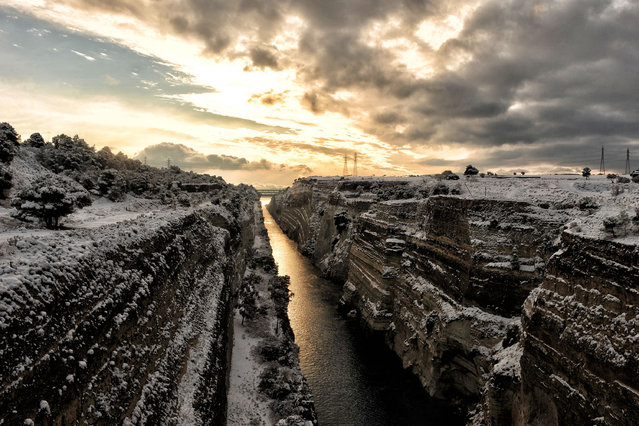 This photo taken on January 10, 2017 shows a snow-covered Corinth Canal, near the city of Corinth. A cold snap gripping Europe has killed more than 30 people in recent days, left thousands of travellers stranded in snow-covered Turkey and brought fresh misery for migrants and the homeless. (Photo by Valerie Gache/AFP Photo) 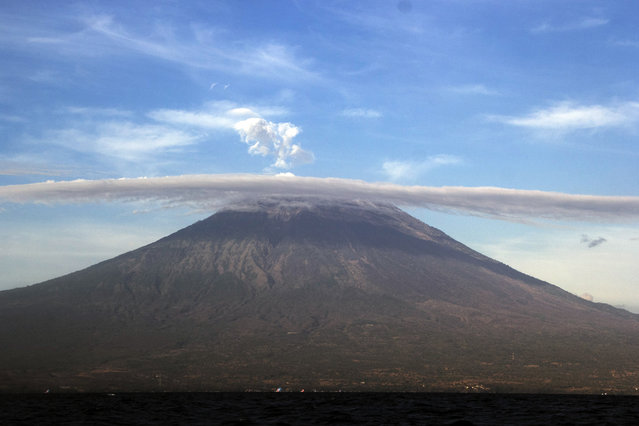 A view of Mount Agung volcanic with small eruption seen from Karangasem sea on September 26, 2017 in Bali, Indonesia. About 50,000 residents flee a rumbling volcano on the Indonesian island of Bali and planes take on extra fuel in case it blows. (Photo by Sijori Images/Barcroft Media via Getty Images) 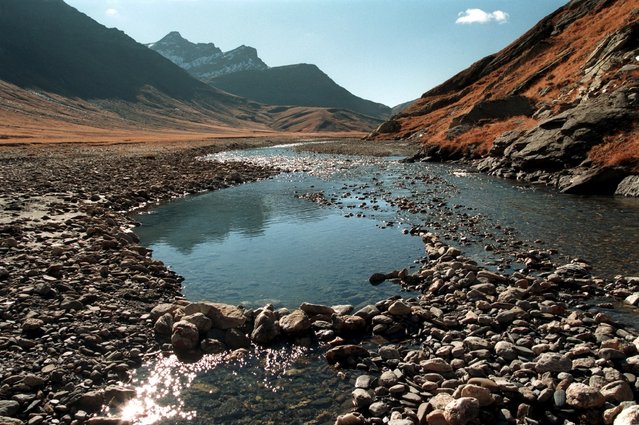 A mountain stream flows gently across the Greina plateau, taken on 2 November 1995. Thanks to the introduced in 1996 landscaped specimens, a “Water National Park of Switzerland” was created. 15 municipalities in the Buendnerland and in the Valais receive compensatory payments for the renunciation of the use of hydropower. The Swiss Greina Foundation (SGS) presented the third edition of its documentary on Friday, July 9, 2004, in Berne, which had been awarded one of the most beautiful Swiss books. The Greina plateau between Graubuenden and Ticino is the symbol for the preservation of untouched river landscapes. (Photo by Arno Balzarini/KEYSTONE) 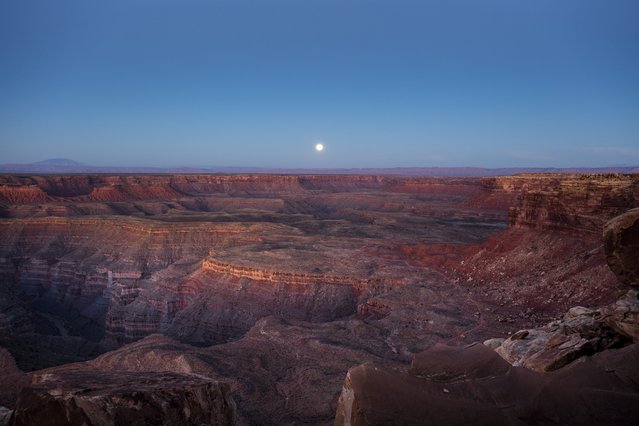 A full “supermen” sets behind the proposed Bear Ears National Monument in the high desert near Muley Point, Utah, 14 November 2016. 14 November 2016 sees the largest full moon since 1948 also known as the “supermoon”, when the moon reaches its closest point to Earth. The next time the moon will be this close will be on 25 November 2034. (Photo by Jim Lo Scalzo/EPA) In this November 12, 2015, file photo, Mt. Everest is seen from the way to Kalapatthar in Nepal. An American climber has died near the summit of Mount Everest and an Indian climber is missing after heading down from the mountain following a successful ascent, expedition organizers said Sunday. (Photo by Tashi Sherpa/AP Photo) 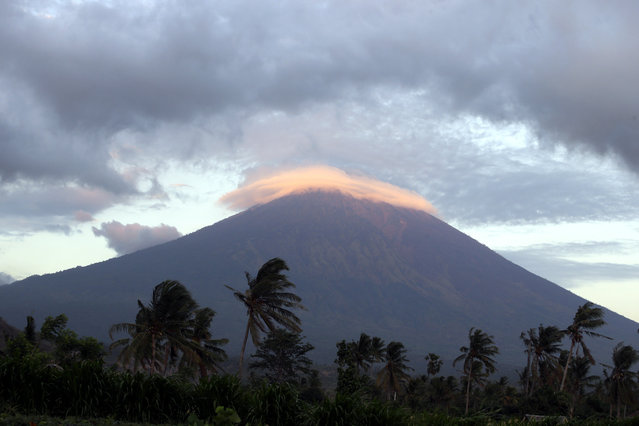 Mount Agung volcano is seen at sunrise in Karangasem, Bali, Indonesia, Tuesday, October 3, 2017. Dire warnings that the volcano on the Indonesian tourist island of Bali will erupt have caused tens of thousands to flee. (Photo by Firdia Lisnawati/AP Photo) 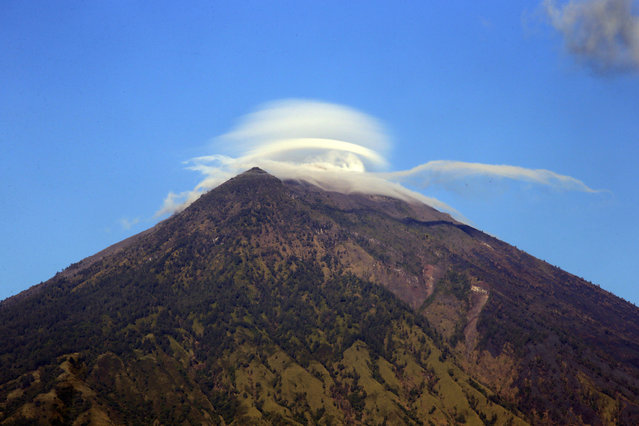 Mount Agung volcano is seen in Karangasem, Bali, Indonesia, Wednesday, October 4, 2017. More than 140,000 people have fled from the surrounds of Mount Agung since authorities raised the volcano's alert status to the highest level on Sept. 22 after a sudden increase in tremors. It last erupted in 1963, killing more than 1,000 people. (Photo by Firdia Lisnawati/AP Photo) 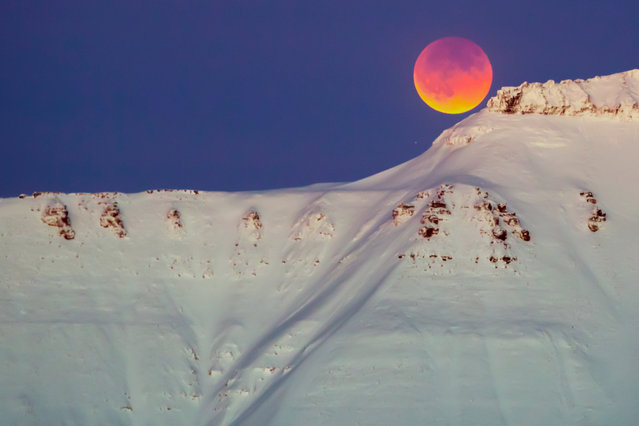 A super blue blood moon behind a mountain is seen from Longyearbyen, Svalbard, Norway, on January 31, 2018. (Photo by Heiko Junge/AFP Photo/NTB Scanpix) 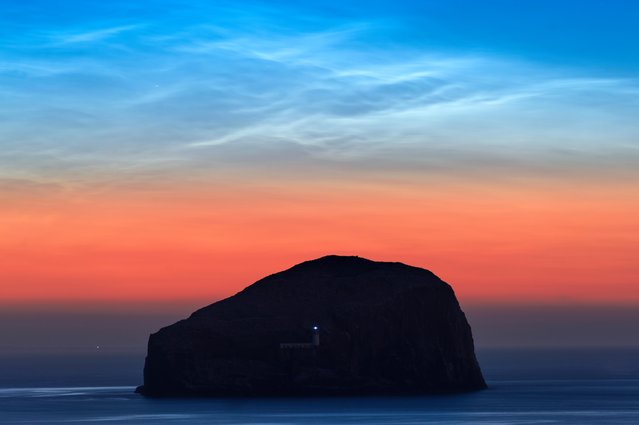 Noctilucent clouds, illuminated from beyond the horizon by the setting sun, over Bass Rock, East Lothian, at 1am, July 12, 2018. (Photo by Tom Duffin/South West News Service) 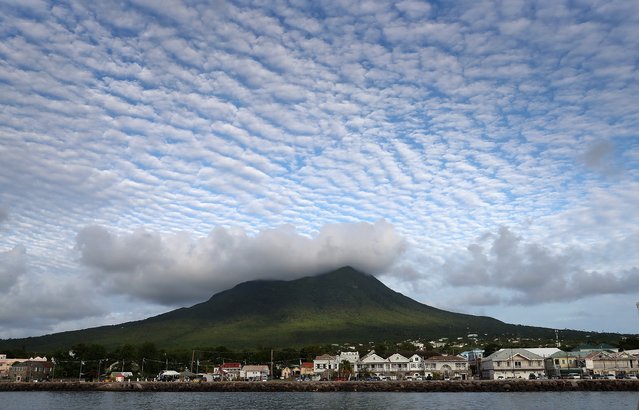 Cloud formations over the volcanic peak on Nevis on the fourth day of an official visit on November 23, 2016 in Port Zante, St Kitts and Nevis. Prince Harry's visit to The Caribbean marks the 35th Anniversary of Independence in Antigua and Barbuda and the 50th Anniversary of Independence in Barbados and Guyana. (Photo by Chris Jackson/Getty Images) 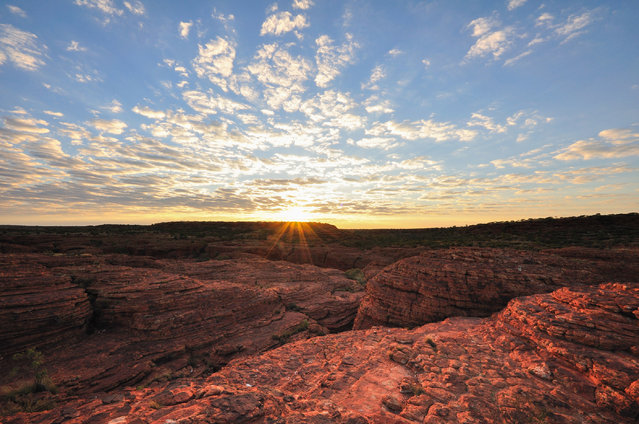