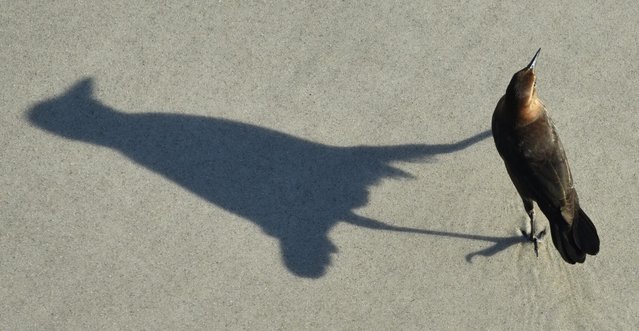 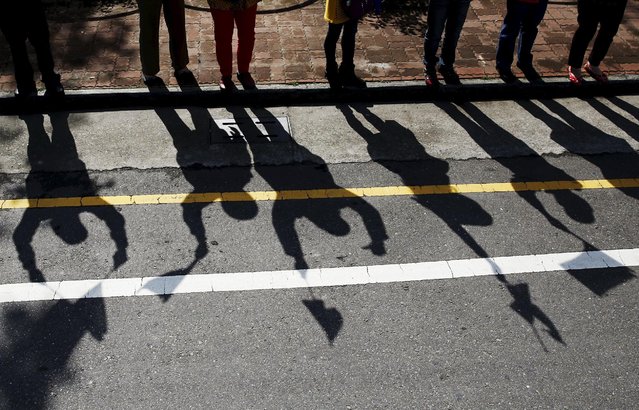 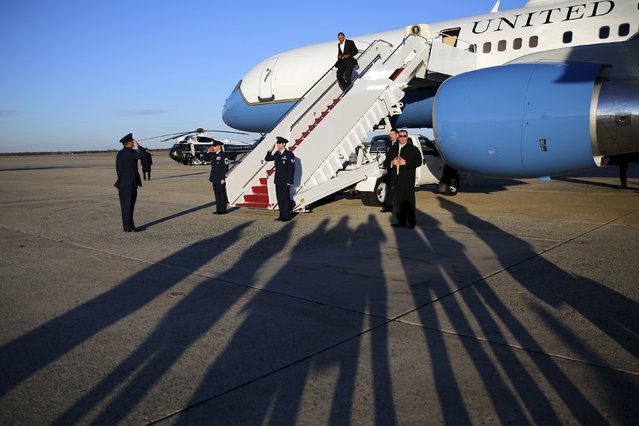 U.S. President Barack Obama arrives aboard Air Force One from Louisiana, at Joint Base Andrews, in Maryland in Maryland, January 14, 2016. (Photo by Carlos Barria/Reuters) 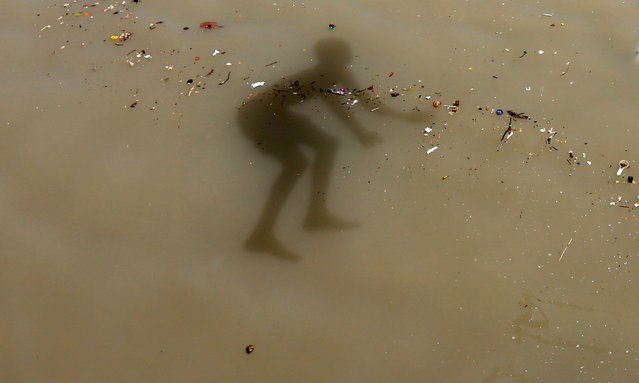 The shadow of a boy is seen as he jumps into the Ganges river to cool off on a hot summer day on the outskirts of Kolkata, India, April 22, 2016. (Photo by Rupak De Chowdhuri/Reuters) 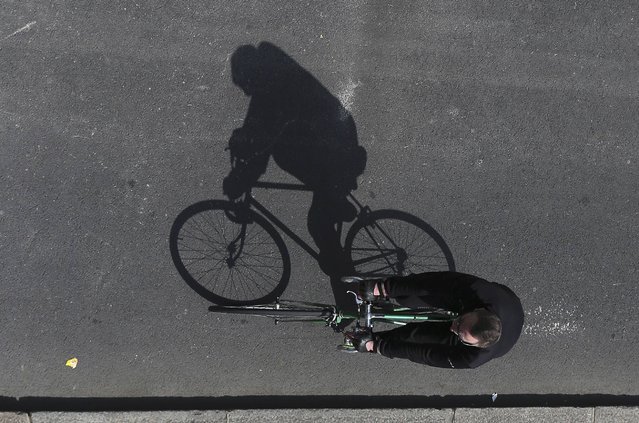 A man casts his shadow as he rides along a cycle superhighway in London, Britain May 15, 2016. (Photo by Neil Hall/Reuters) 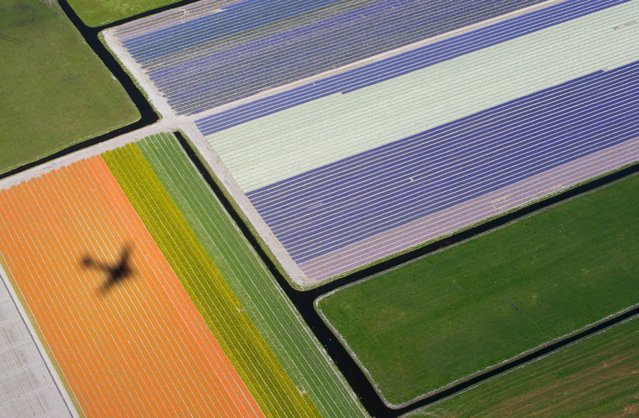 Aerial view of flower fields near the Keukenhof park, also known as the Garden of Europe, in Lisse, The Netherlands April 15, 2015. (Photo by Yves Herman/Reuters) 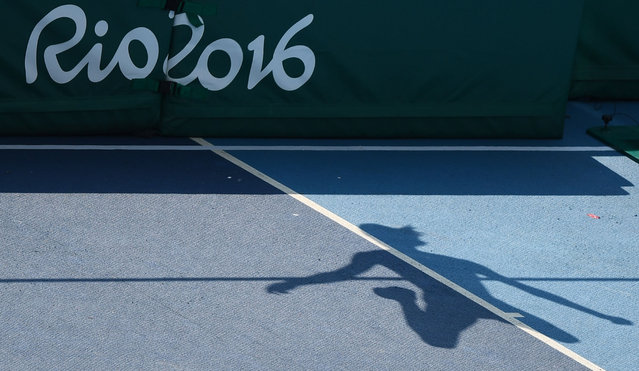 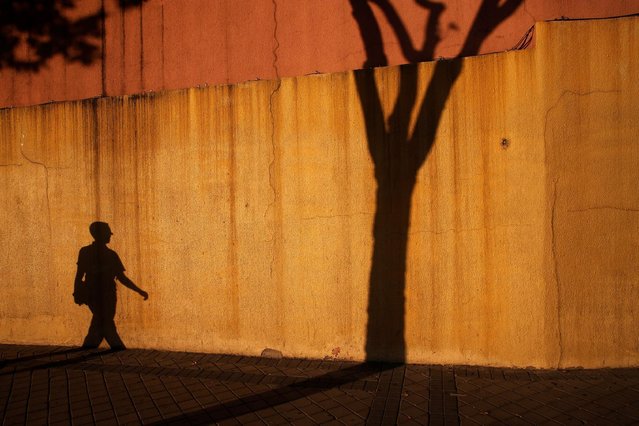 Shadows of a man and a tree are casted on a wall in Madrid, Spain, September 9, 2016. (Photo by Susana Vera/Reuters) 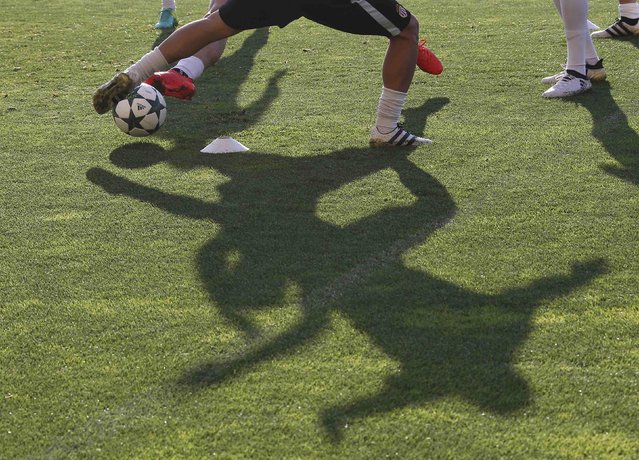 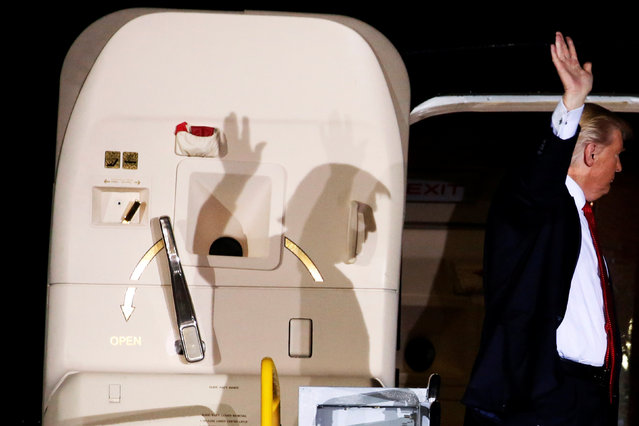 Republican U.S. presidential nominee Donald Trump casts a shadow on his airplane door as he departs after a rally with supporters at Orlando Melbourne International Airport in Melbourne, Florida, U.S. September 27, 2016. (Photo by Jonathan Ernst/Reuters) 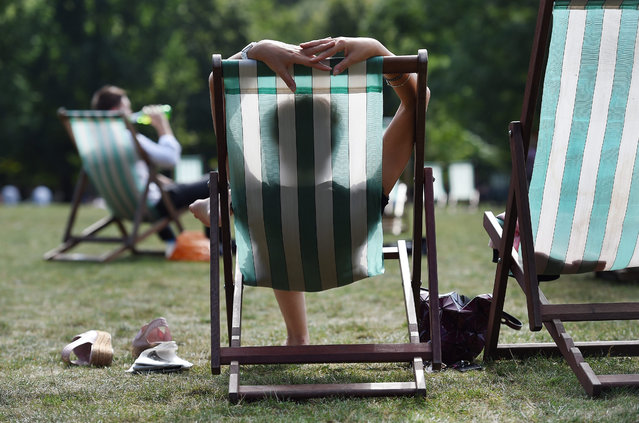 Sunbathers enjoy the warm weather at Green Park in London, Britain, 13 September 2016. Britain is experiencing unusually hot September weather with temperature in south-east England reaching over 32 degrees Celsius. Not since 1949 has the UK seen such temperatures in September. (Photo by Andy Rain/EPA) 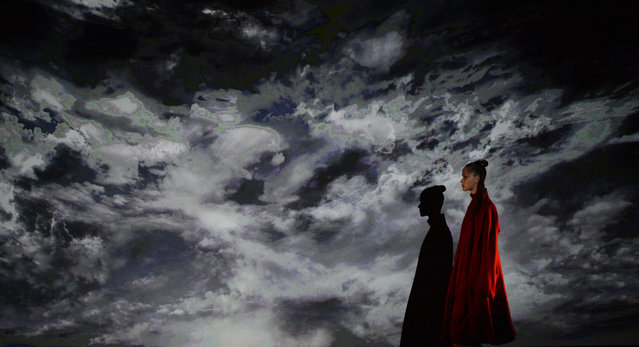 A model presents a creation by Japanese designer Sara Arai for the label araisara during the Mercedes-Benz Fashion Week in Tokyo, Japan, March 18, 2014. (Photo by Franck Robichon/EPA) 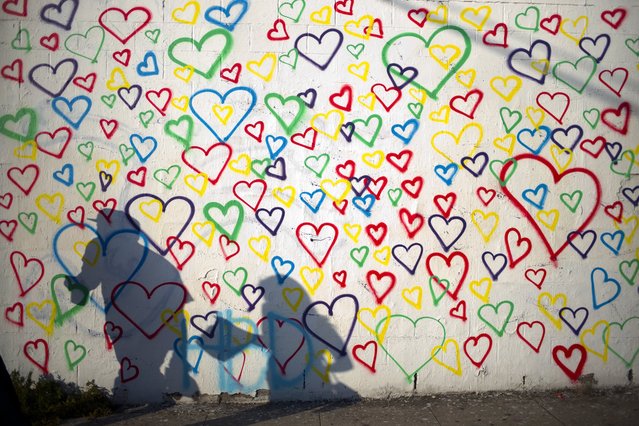 A couple casts shadows as they walk past a wall painted with hearts, an artwork created by Royal, on Wednesday, June 8, 2016, in Los Angeles. (Photo by Jae C. Hong/AP Photo) 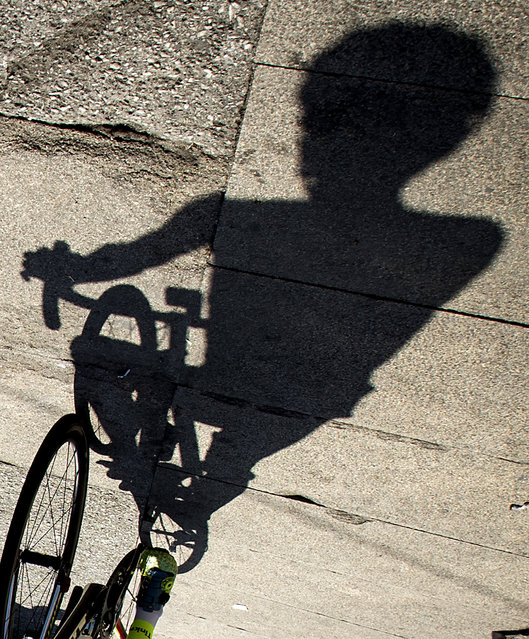 The shadow of Tinkoff's Spanish cyclist Alberto Contador is projected on the ground before start the fourth stage of the 71st edition of “La Vuelta” Tour of Spain, a 163,5 km route between Betanzos to San Andres de Teixido on August 23, 2016. (Photo by Jaime Reina/AFP Photo) 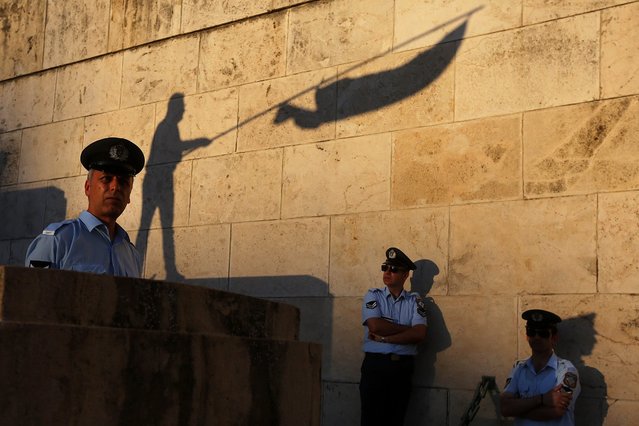 Protesters take part in an anti-government rally organised by the “Resign!” movement, ouside the parliament in Athens, Greece, 15 June 2016. Thousands of people took part in a protest movement that organizers have named “Resign!' outside the parliament at central Syntagma Square. The 'Resign!” movement is the initiative of certain individuals who call on the government to resign because of failed policies and measures that drive the country to poverty. (Photo by Orestis Panagiotou/EPA) 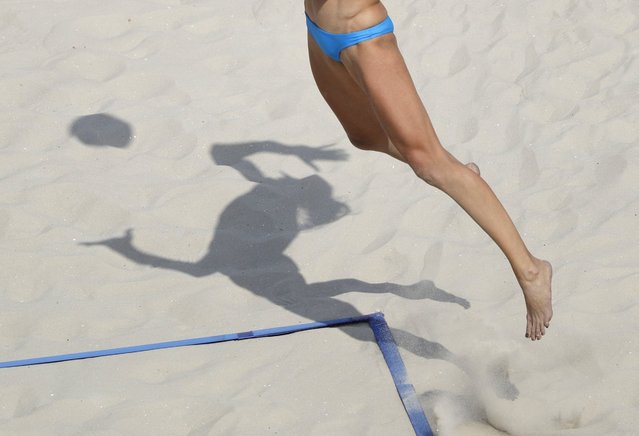 Russia's Ekaterina Birlova casts a shadow on the sand as she serves to Poland during a women's beach volleyball match at the 2016 Summer Olympics in Rio de Janeiro, Brazil, Tuesday, August 9, 2016. (Photo by Marcio Jose Sanchez/AP Photo) 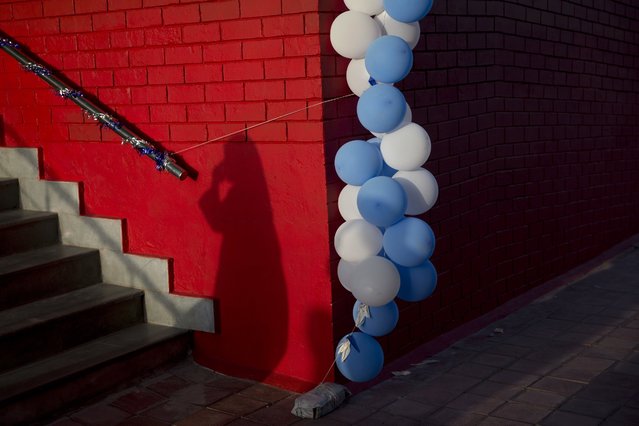 A Missionaries of Charity nun's shadow is cast on a wall ahead of a thanks giving mass upon the sainthood on Mother Teresa at Nirmal Hriday, a destitute home run by them in New Delhi, India, Sunday, September 4, 2016. Pope Francis declared Mother Teresa a saint on Sunday, praising the tiny nun for having taken in society's most unwanted and for having shamed world leaders for the crimes of poverty they themselves created. (Photo by Tsering Topgyal/AP Photo) 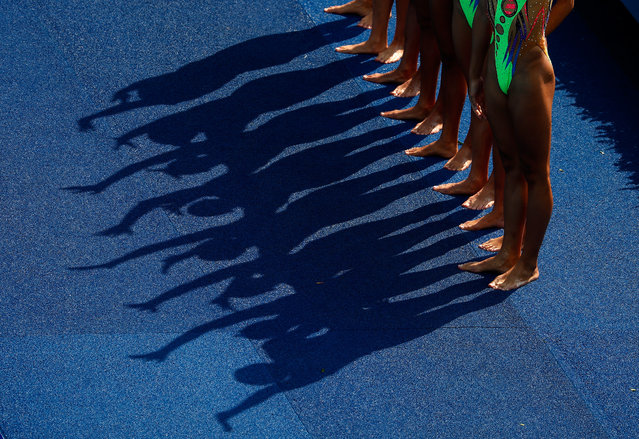 The team of Japan wave to the crowd during the Synchronised Swimming Teams Technical Routine at the Maria Lenk Aquatics Centre on Day 13 of the 2016 Rio Olympic Games on on August 18, 2016 in Rio de Janeiro, Brazil. (Photo by Clive Rose/Getty Images) 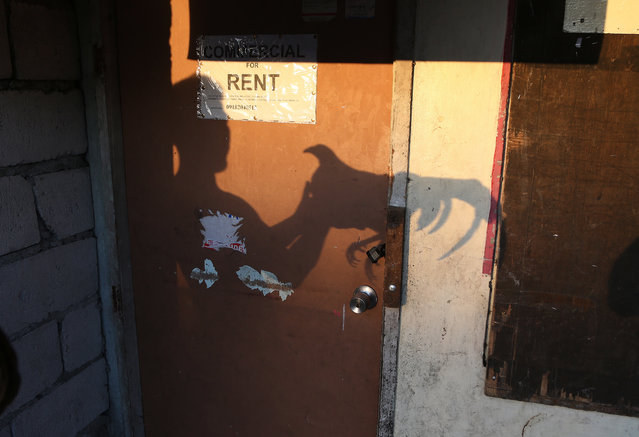 The shadow of Renante Nodalo is reflected on a door as he takes care of a rooster to be used for cockfighting in Manila, Philippines, Wednesday, April 20, 2016. Cockfighting is a popular pastime in the Philippines. (Photo by Aaron Favila/AP Photo) 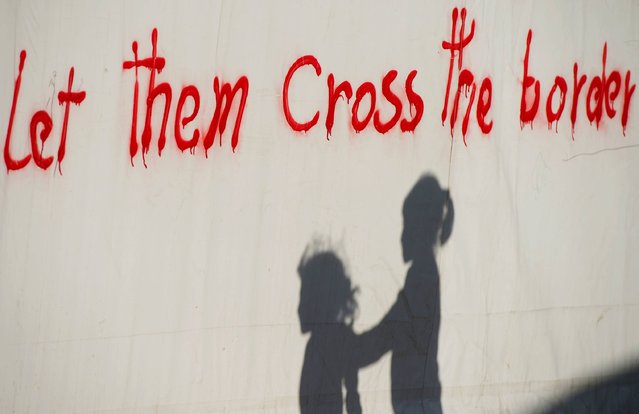 Children are silhouetted next to a writing at a makeshift camp for migrants and refugees near the village of Idomeni not far from the Greek-Macedonian border on May 4, 2016. (Photo by Tobias Schwarz/AFP Photo) 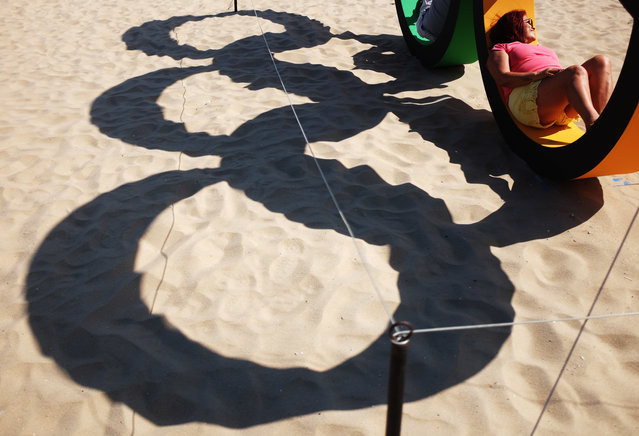 The Olympic rings cast a shadow on the sand as visitors pose for photos along Copacabana Beach ahead of the upcoming 2016 Summer Olympics in Rio de Janeiro, Brazil, Tuesday, August 2, 2016. The iconic Copacabana beach will be the starting point for the road cycling race, marathon swimming and triathlon competitions during the Olympics. (Photo by David Goldman/AP Photo) 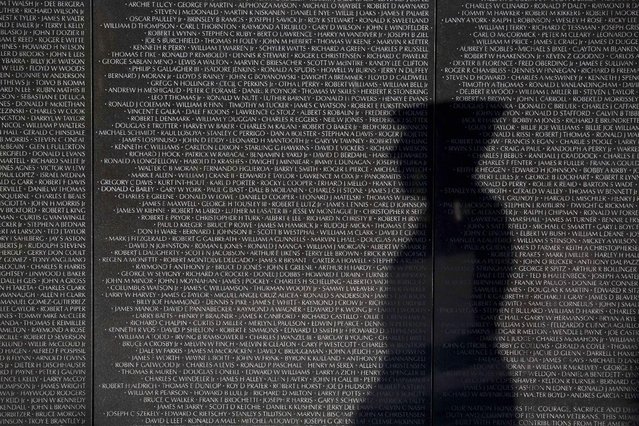 A member of the Joint Services Honor Guard is reflected on the Vietnam Veterans Memorial prior to a wreath laying ceremony to commemorate the 50th anniversary of the Vietnam War, March 29, 2016 in Washington, DC. (Photo by Drew Angerer/Getty Images) 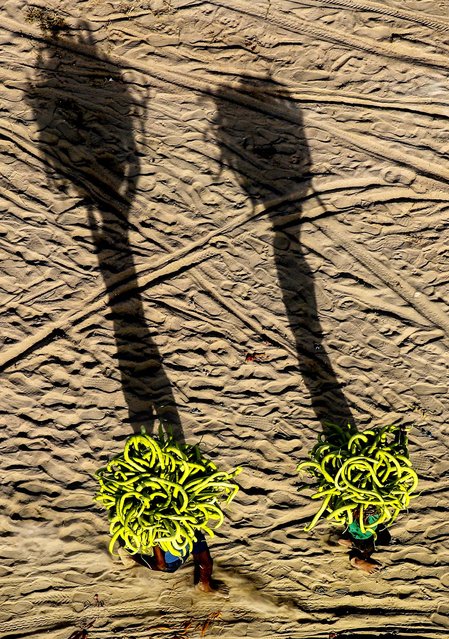 Farmers carry cucumbers to sell in the market on the outskirts of Allahabad, India, on April 8, 2014. Demand for cucumbers increases as the temperature rises in the country. (Photo by Rajesh Kumar Singh/Associated Press) 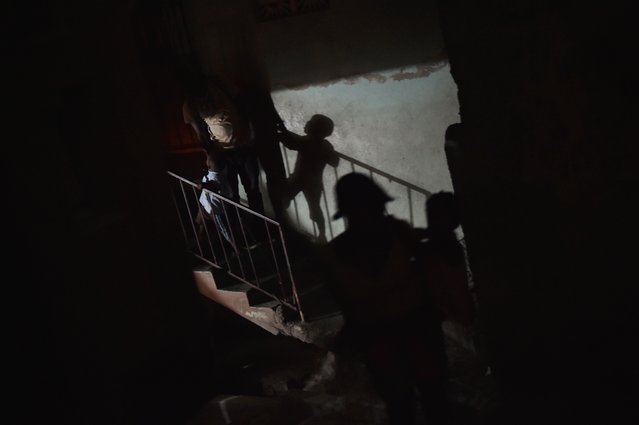 People walk step to a street in the Jalousie neighborhood, Petion Ville commune of the Haitian capital Port-au-Prince, March 14, 2016. Haiti is the poorest country in the Americas, still struggling to get back on its feet after being hobbled by a devastating 2010 earthquake and now plunged into a drawn-out electoral crisis. (Photo by Hector Retamal/AFP Photo) 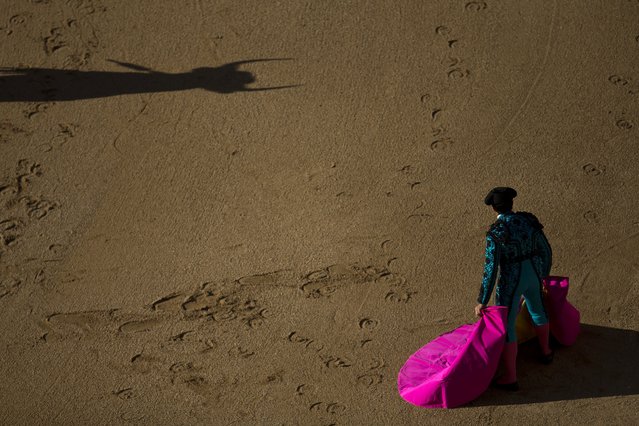 A Saltillo ranch fighting bull casts its shadow on the ground as a bullfighter looks at him during a bullfight at the Las Ventas bullring in Madrid, Spain, Tuesday, May 31, 2016. (Photo by Francisco Seco/AP Photo)
Edit Del
03 Oct 2016 09:40:00, post received 0 comments
Publication archive:
←   →
Popular tags:
All tags
Last searches: