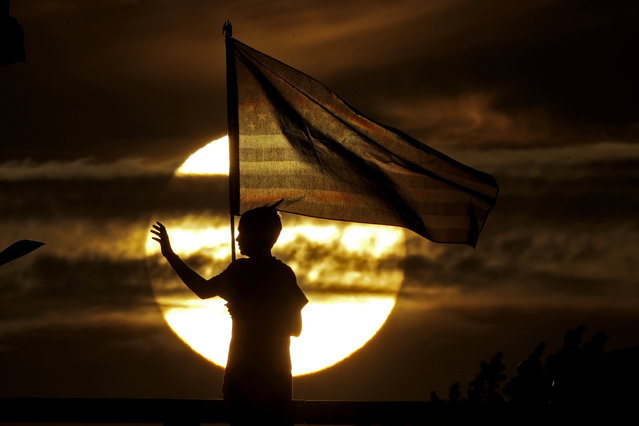 A boy waves to passing motorists to commemorate the anniversary of the Sept. 11 terrorist attacks from an overpass on Interstate 35 Wednesday, September 11, 2019, near Melvern, Kan. Area residents began manning the bridge with flags and waving to motorists on the anniversary in 2002 and have done it ever since. (Photo by Charlie Riedel/AP Photo) 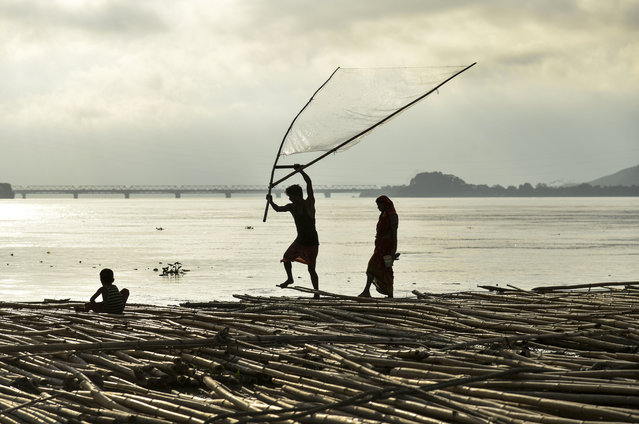 A man fishes along with his family as they stand on floating bamboo logs in the Brahamaputra river in Guwahati in the northeastern state of Assam on September 14, 2019. (Photo by David Talukdar/AFP Photo) 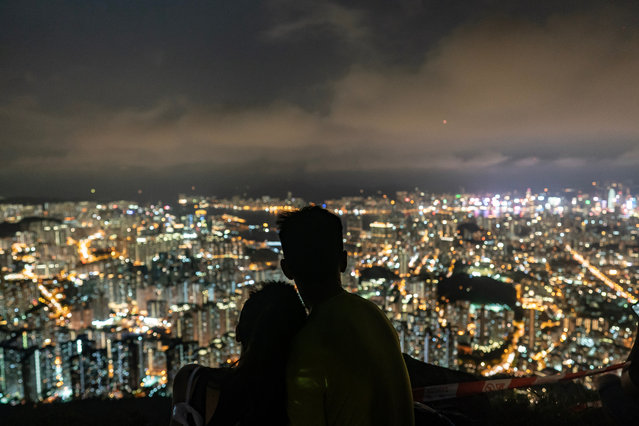 A couple of pro-democracy supporters enjoy a moment as they gather on Lion Rock during mid-autumn festival on September 13, 2019 in Hong Kong, China. (Photo by Anthony Kwan/Getty Images) 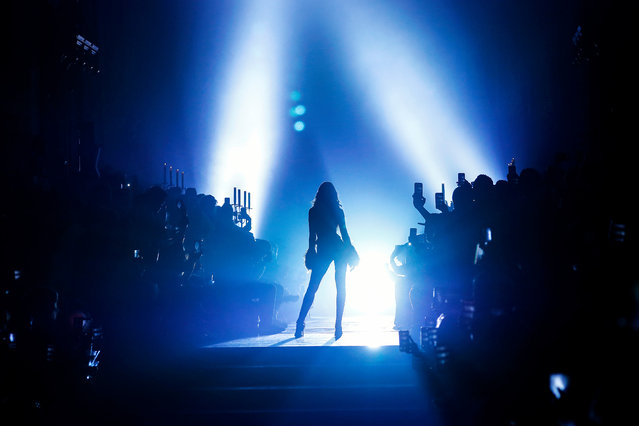 Izabel Goulart walks the runway at the Julien Macdonald show during London Fashion Week September 2019 at Southwark Cathedral on September 16, 2019 in London, England. (Photo by John Phillips/BFC/Getty Images for BFC) 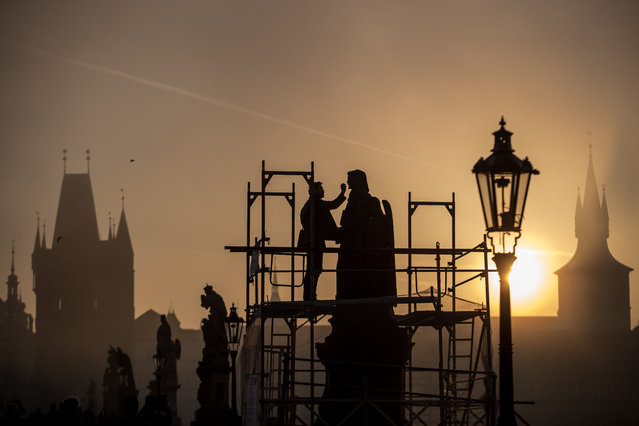 A restorer works on statue on Charles Bridge early in the foggy morning in Prague, Czech Republic, 25 October 2019. Meteorologists predict sunny weather with temperatures around 18 degrees Celsius in the next days in Czech Republic. (Photo by Martin Divisek/EPA/EFE) 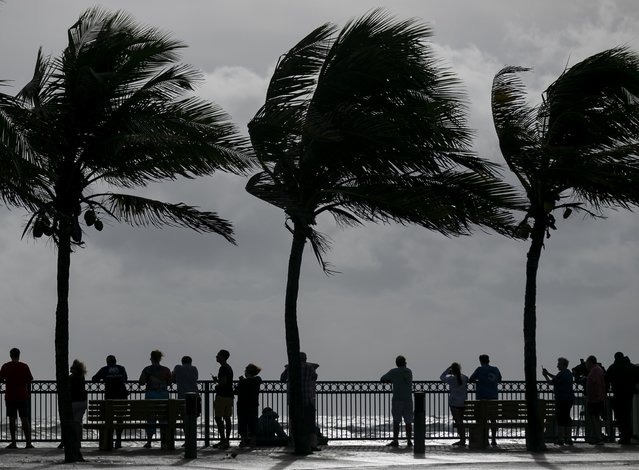 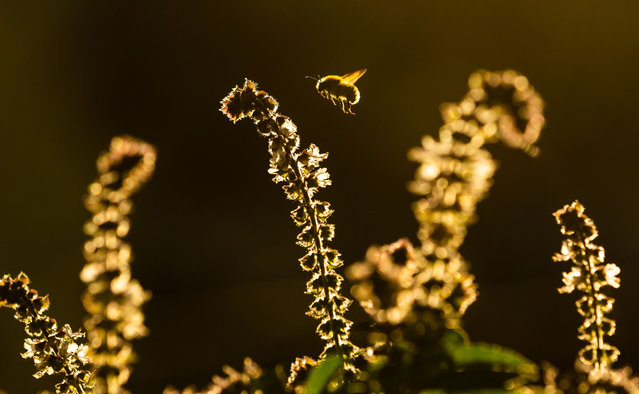 The rising sun casts a golden light on a bumblebee in a garden in Wentorf, Germany on September 22, 2019. (Photo by Ulrich Perrey/dpa/AFP Photo) 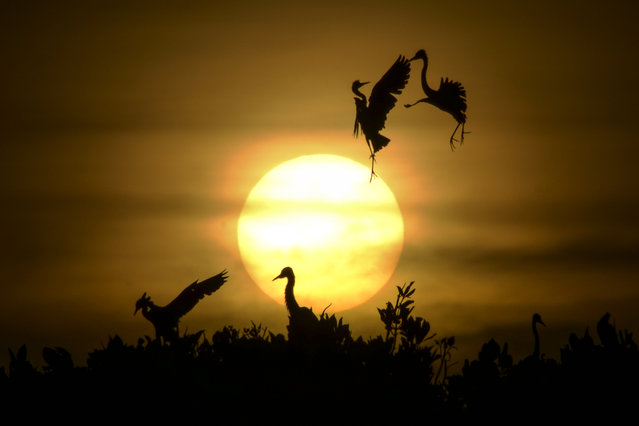 Some Egret birds take a flight as others rest on the top of mangrove trees during sunset at Kajhu beach, in Aceh province on July 1, 2019. (Photo by Chaideer Mahyuddin/AFP Photo) 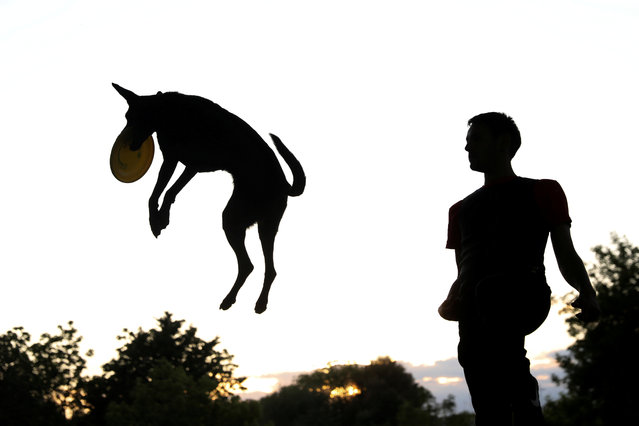 A dog is airborne as it catches a frisbee next to its owner in a park in Madrid, Spain, May 16, 2018. (Photo by Sergio Perez/Reuters) 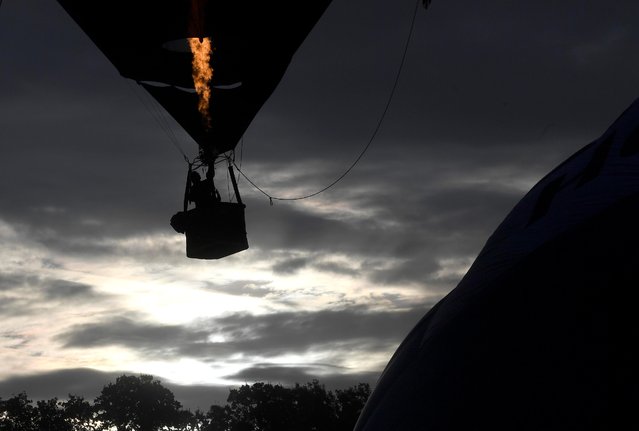 Balloons launch during a mass take off at the annual Bristol hot air balloon festival in Bristol, Britain, August 8, 2019. (Photo by Toby Melville/Reuters) 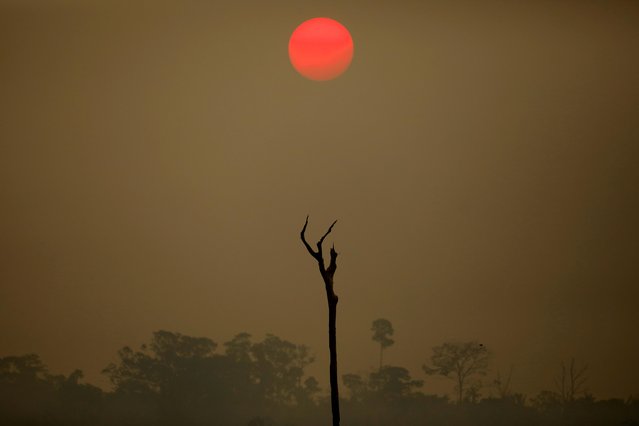 A view of a deforested area at the National Forest Bom Futuro in Rio Pardo, Rondonia state, Brazil, September 12, 2019. (Photo by Bruno Kelly/Reuters) 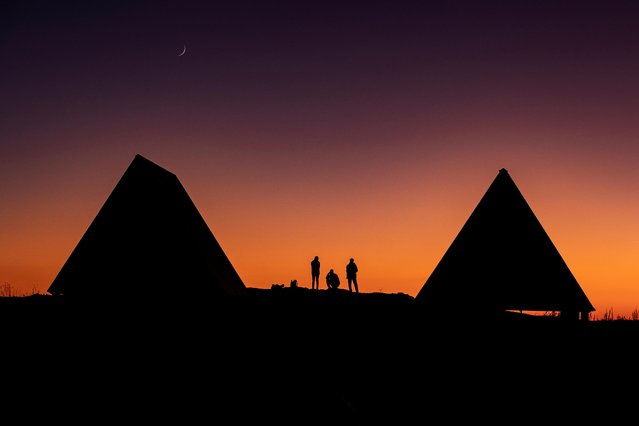 Tourists watch the sunset in the Caucasus mountains outside Krasnaya Polyana near Sochi, Russia on September 30, 2019. (Photo by Maxim Shemetov/Reuters) 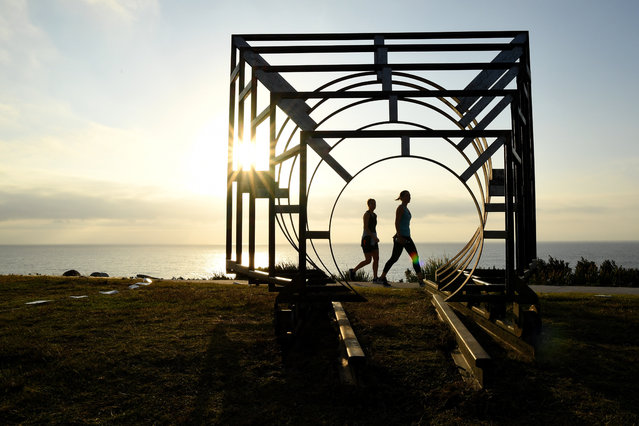 People walk past the sculpture “Between” by Greek artist Danai Kotsaki on Bondi beach in Sydney, Australia, 24 October 2019. The sculpture is part of the 23rd edition of the exhibition Sculpture by the Sea, featuring artists from Australia and overseas. The event runs from 24 October through to 10 November 2019. (Photo by Joel Carrett/EPA/EFE) 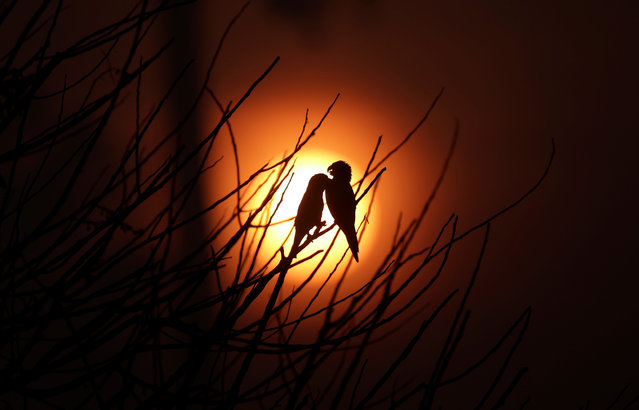 Birds are pictured as the sun rises amid smoke from a burning tract of Amazon jungle as it is cleared by loggers and farmers near Porto Velho, Brazil on August 28, 2019. (Photo by Ricardo Moraes/Reuters) 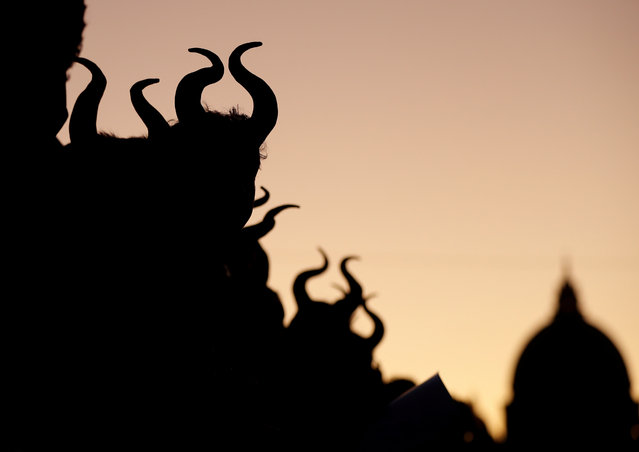 Fans wait for the arrivals of cast members at the European premiere of “Maleficent: Mistress of Evil” in Rome, Italy, October 7, 2019. (Photo by Yara Nardi/Reuters) 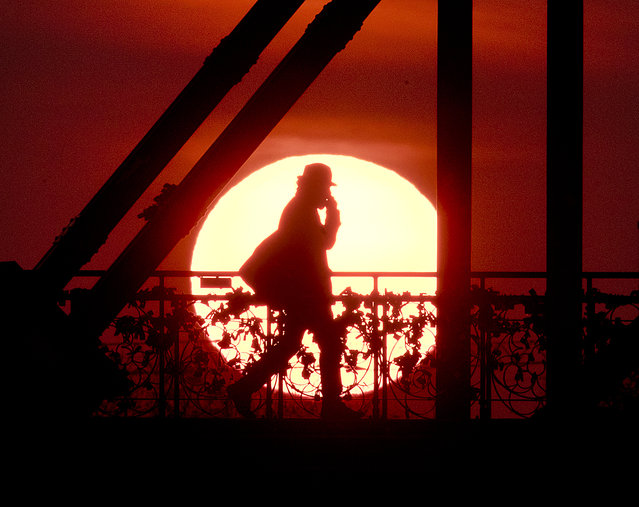 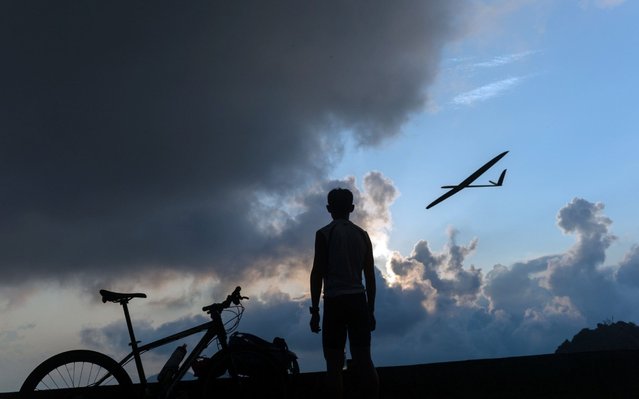 A cyclist enjoys the views of Hong Kong from Kowloon Peak as a remote controlled glider flies by in Hong Kong, China, 24 April 2019. Kowloon Peak or Fei Ngo Shan is a 602 m (1,975 ft) tall hill in the northeast corner of New Kowloon, Hong Kong. (Photo by Jerome Favre/EPA/EFE) 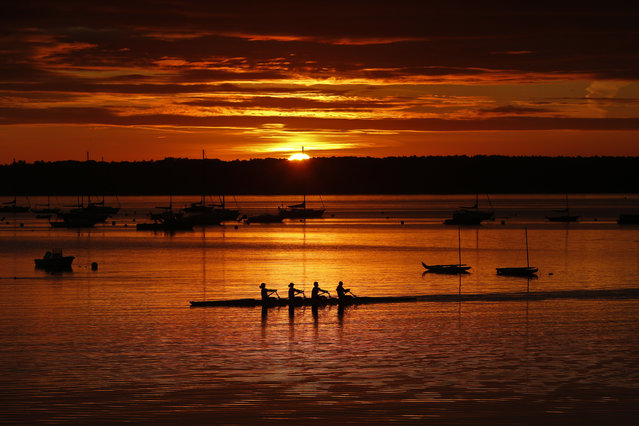 A quad scull of rowers begin their workout on Casco Bay as the sun starts to peak over Great Diamond Island, Wednesday, August 28, 2019, in Portland, Maine. Calm winds and flat water made for ideal conditions for the Portland Community Rowing Association's final outing of the year. (Photo by Robert F. Bukaty/AP Photo) 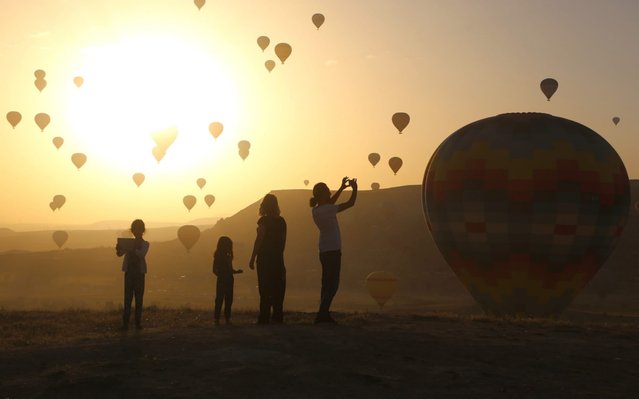 Hot air balloons glide over Goreme district on the first day of Eid al-Fitr during early morning at the historical Cappadocia region, located in Central Anatolia's Nevsehir province, Turkey on June 4, 2019. Cappadocia is known as a region which attracts tourists with hot air balloon rides over its cone-shaped rock formations. (Photo by Alpaslan Korukcu/Anadolu Agency/Getty Images) 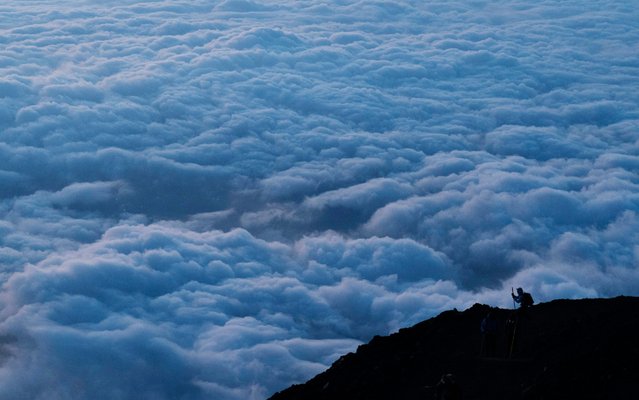