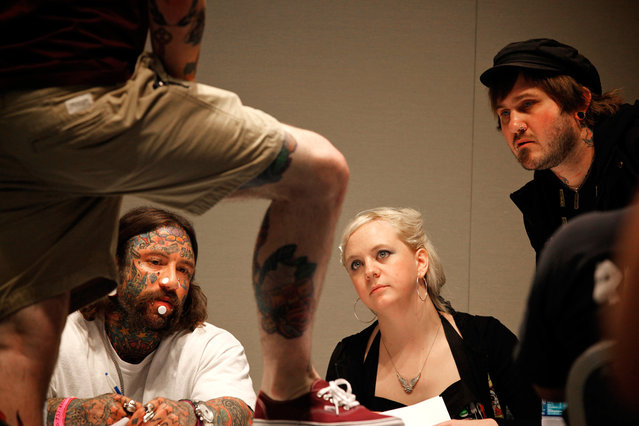 Tattoo judges inspect the tattoos of a competitor at the Hampton Roads Tattoo Festival in Virginia, on March 2, 2012. (Photo by Larry Downing/Reuters) 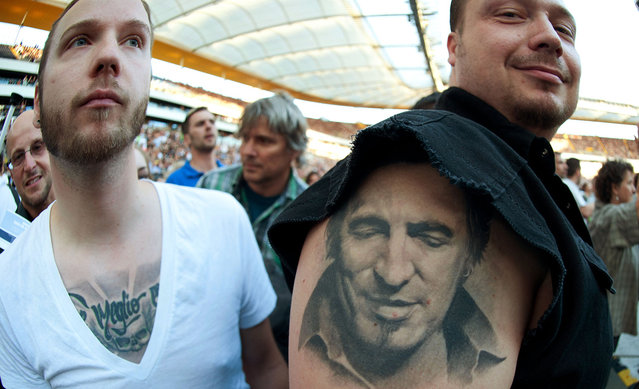 A Bruce Springsteen fan shows his tattoo at the opening concert of Springsteen's “Wrecking Ball” world tour at the Commerzbank Arena in Frankfurt, on May 25, 2012. (Photo by Thomas Lohnes/AP Photo) 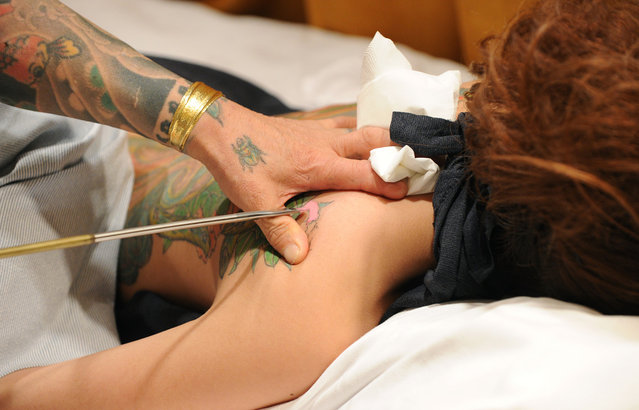 Japanese tattooist Horiyoshii III tattoos a flower on the back of a woman at the Foreign Correspondents' Club in Tokyo, on May 22, 2012. Horiyoshii III is a tattoo artist renowned for his full body designs, which can take many sessions over many years to complete. (Photo by Toru Yamanaka/AFP) 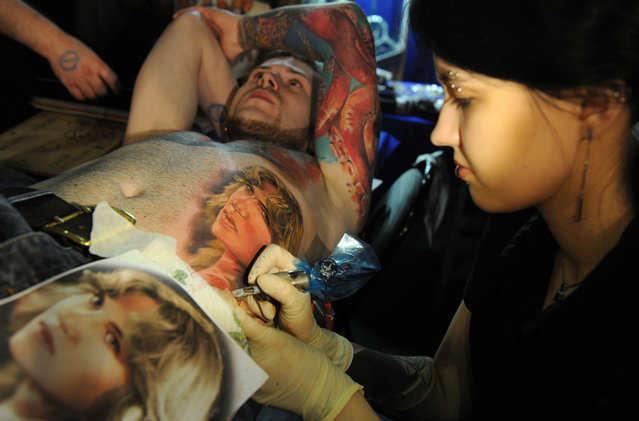 A tattoo artist works during an International Congress of Tattoo Artists in Moscow, on May 18, 2012. (Photo by Kirill Kudryavtsev/AFP) 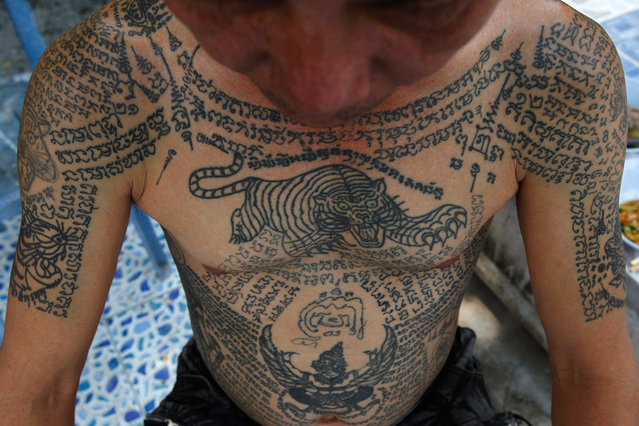 A man shows tattoos on his body at Wat Bang Phra in Nakhon Pathom province, about 80 km (50 miles) from Bangkok, on March 2, 2012. Thousands of believers from across Thailand travel to the monastery to attend the annual tattoo festival to have their bodies adorned with tattoos and to pay their respects to the temple's master tattooist. They believe the tattoos have mystical powers, warding off bad luck and protecting them from harm. (Photo by Sukree Sukplang/Reuters) 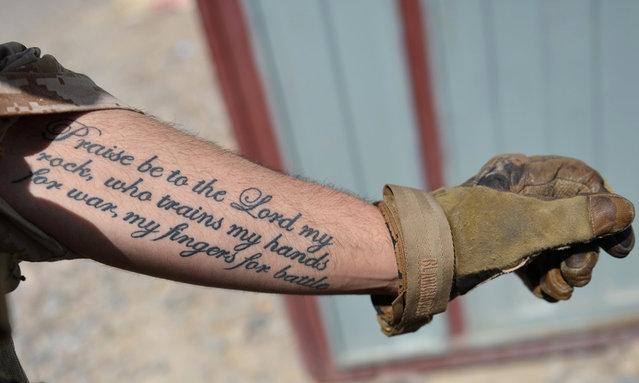 A US Marine from Kilo Company of the 3rd Battalion 8th Marines Regiment shows his tattoo during a patrol in Garmser, Helmand Province, Afghanistan, on June 27, 2012. (Photo by Adek Berry/AFP) 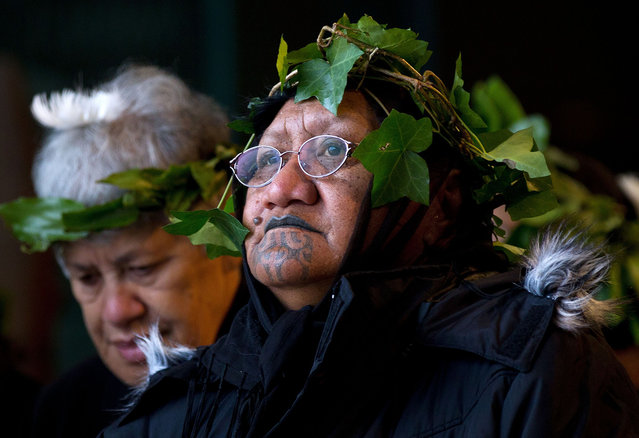 Members of The Tainui Waka Alliance tribe welcome the return of 20 mummified tattooed Maori heads (Toi Moko) that were taken to Europe in the 1700s and 1800s, during a ceremony at Te Papa Museum in Wellington, New Zealand, on January 27, 2012. The tattooed heads were handed over by French officials at the Quai Branly Museum in Paris after a four-year political struggle. The Maori heads were once warriors that tattooed their faces with elaborate geometric designs to show their rank and were an object of fascination for European explorers who collected and traded them from the 18th century onwards. (Photo by Marty Melville/AFP) 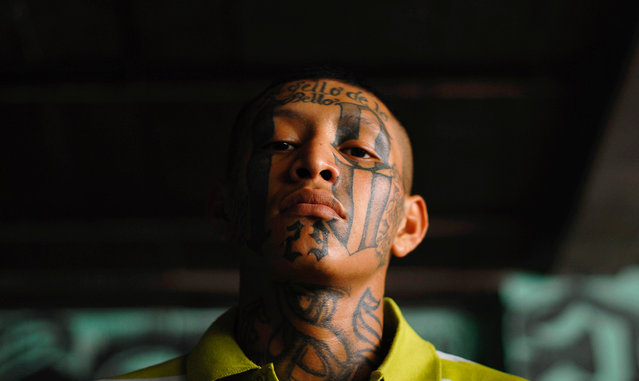 A gang member and inmate poses for a photograph inside the jail in Quetzaltepeque, El Salvador, on May 2, 2012. Rival Salvadoran gangs announced an expansion of the terms of a truce as the Central American country grapples with a plague of violent crime that threatens to sweep the nation. (Photo by Ulises Rodriguez/Reuters) 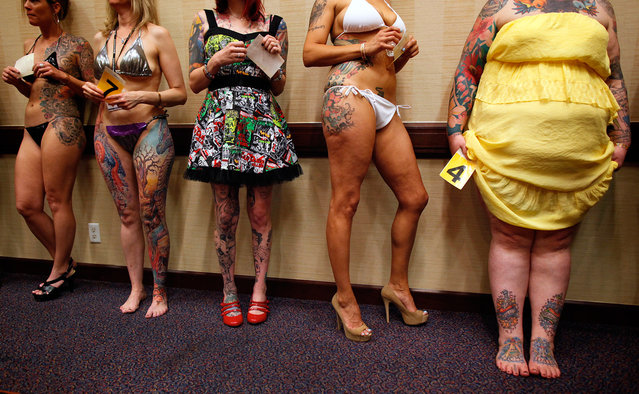 Keisha Holcomb (right), 31, from Fort Collins, Colorado, waits in line to have her tattoos judged in a contest during the National Tattoo Association Convention in Cincinnati, Ohio, on April 13, 2012. Holcomb, the product of a military family upbringing, was 16 when she got her first tattoo and is now a budding tattoo artist herself. She wants to have a full-body tattoo eventually, with the exception of her hands, throat and head. “Try to keep it classy”, she says. (Photo by Larry Downing/Reuters) 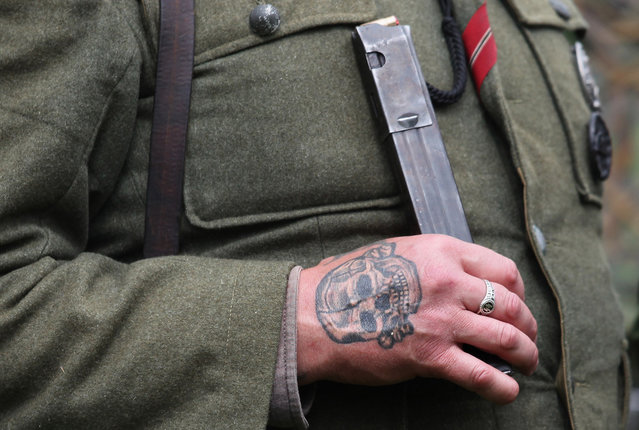 A WWII re-enactor dressed as a German soldier sports an SS Death's Head tattoo as he takes part in a mock battle as part of the two-day Maiden Newton At War 1940s re-enactment weekend in Maiden Newton, near Dorchester, England, on June 23, 2012. The quiet Dorset village of Newton Maiden was seen as a strategic hub during the Second World War and was heavily fortified against a threatened German invasion. It later saw hundreds of American servicemen quartered in the area before the D Day landings. To celebrate the village's wartime past, the biennial event, which started in 2008, has grown into one of the biggest re-enactments in the country and this year featured one of the largest convoys of Second World War vehicles seen in Dorset since D Day in 1944. (Photo by Matt Cardy) 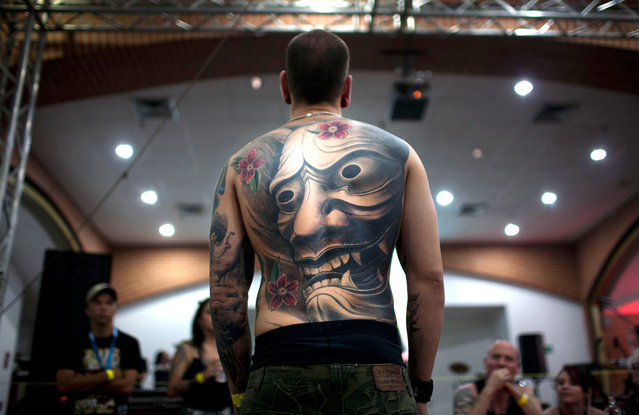 A man shows his tattoos as he attends the Venezuela Expo Tattoo in Caracas, Venezuela, on January 28, 2012. (Photo by Ariana Cubillos/AP Photo) 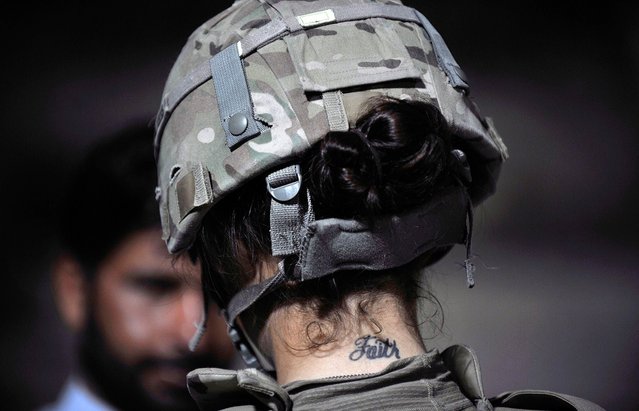 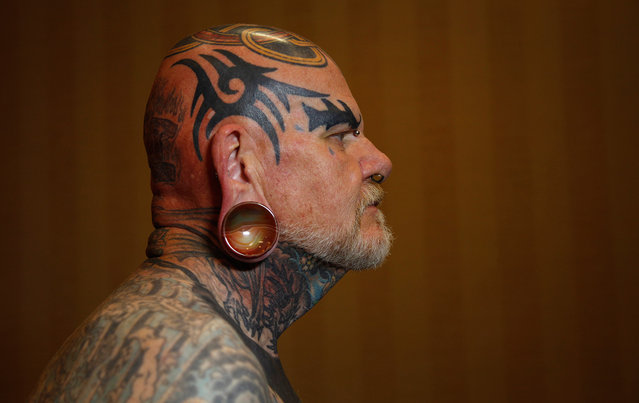 Robert Seibert, 62, from Burlington, Kentucky, shows off his full body of tattoos, including the tribal-inspired designs he has accumulated over 40 years, during the National Tattoo Association Convention in Cincinnati, Ohio, on April 14, 2012. Of his art, Seibert says, “I'm one of the people that can't have a favorite tattoo, each is like a certain phase of my life. To me it's a picture history of what I have gone through, through the years”. (Photo by Jason Reed/Reuters) 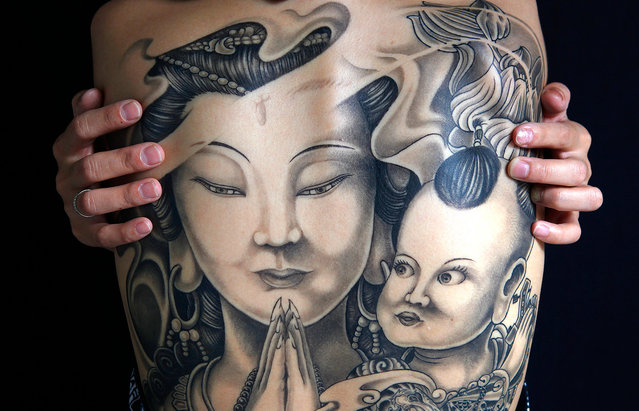 Artwork on the back of Yi-jun, shown during the 2010 Taiwan International Tattoo Convention in Taipei, on July 31, 2010. The convention aimed to gather people from all over the world to promote the industry and garner positive thinking towards tattoos. (Photo by Nicky Loh/Reuters) 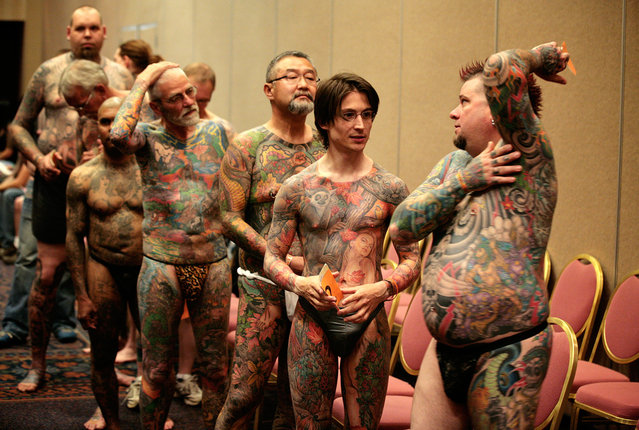 Jeff Bitting (right), from St Augustine, Florida, speaks backstage with fellow full-body tattoo contestants before judging at the National Tattoo Association Convention in Cincinnati, Ohio, on April 13, 2012. In his 33 years of getting tattoos, Bitting says he has had about 500 hours of work and will complete his other leg in his bid to win more full-body contests. (Photo by Larry Downing/Reuters) 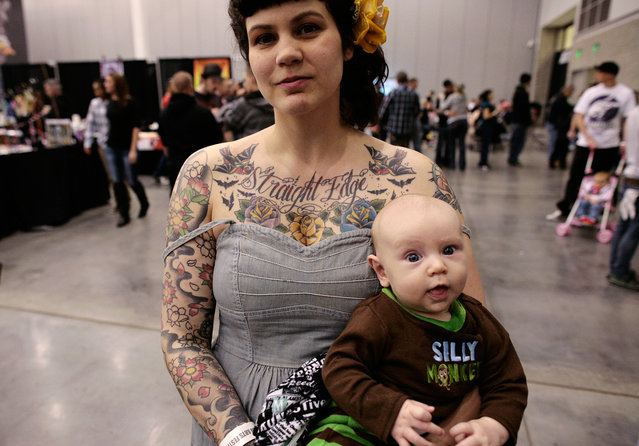 A tattooed participant in the Hampton Roads Tattoo Festival holds her baby in Virginia, on March 3, 2012. (Photo by Larry Downing/Reuters) 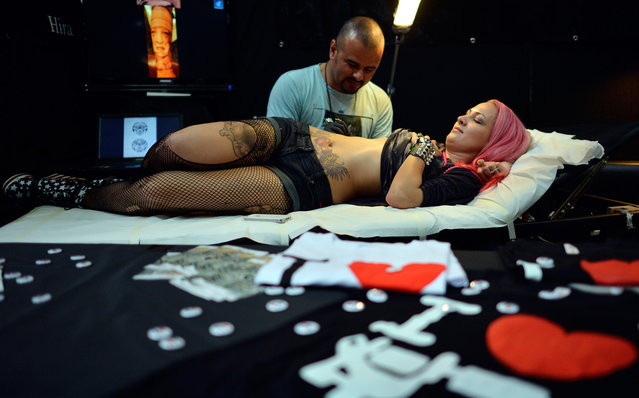 A visitor to the 17th International Tattoo and Piercing Convention in the Westfalenhallen in Dortmund, Germany, is tattooed on June 15, 2012. (Photo by Sascha Schuermann/AP Photo) 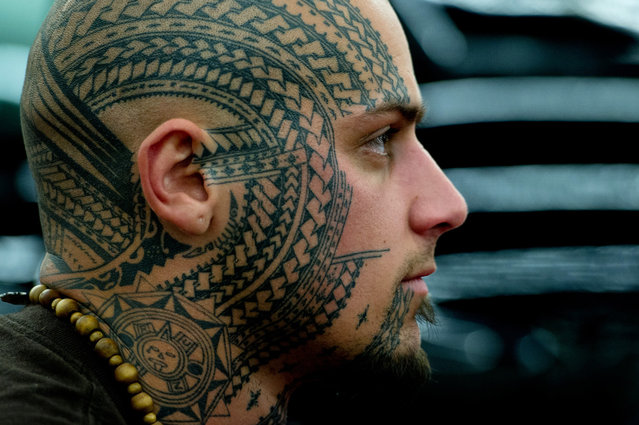 A man tattooed with a traditional pattern from New Zealand poses at the international tattoo convention in Frankfurt am Main, Germany, on March 30, 2012. (Photo by Boris Roessler/AFP) 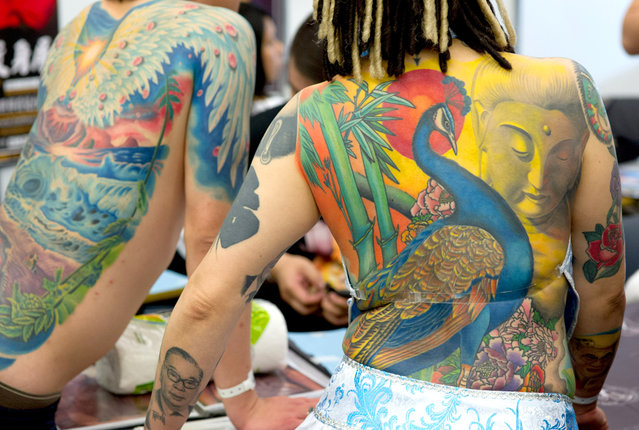 Iris (right) from Taiwan presents her tattoos at the international tattoo convention in Frankfurt am Main, Germany, on March 31, 2012. (Photo by Boris Roessler/AFP) 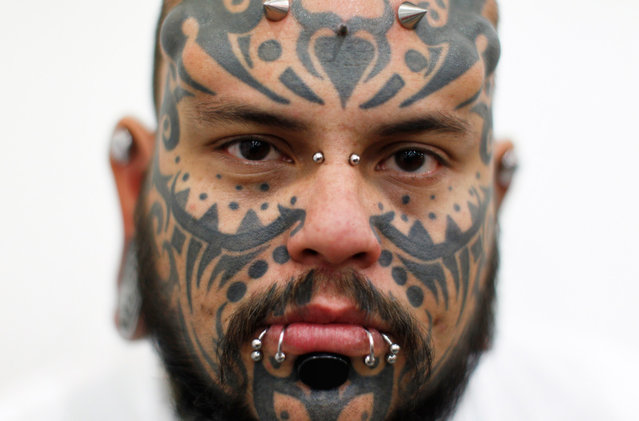 Emilio Gonzalez from Venezuela, during a tattoo exhibition in Caracas, on January 27, 2012. (Photo by Jorge Silva/Reuters) 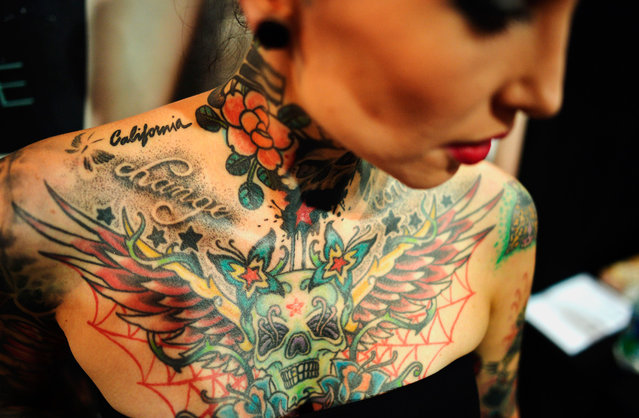 A visitor to a Tattoo and Piercing Convention event shows her tattoos in Dortmund, Germany, on June 15, 2012. (Photo by Sascha Schuermann/AP Photo) 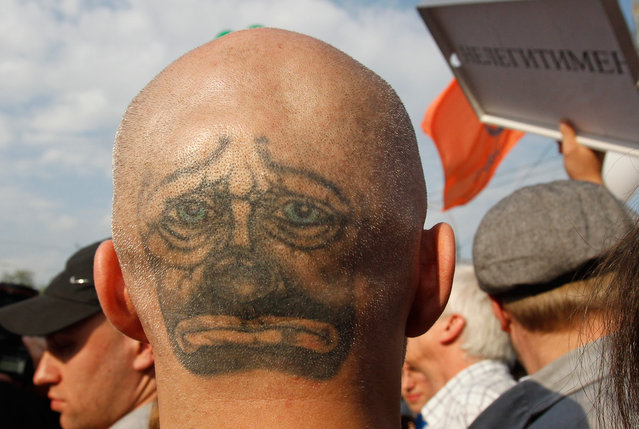 A protester with a face tattooed on the back of his head takes part in the “march of the million” opposition protest in central Moscow, on May 6, 2012. Russian riot police beat protesters with batons and hauled away dozens on Sunday after skirmishes broke out at a demonstration in Moscow against Vladimir Putin on the eve of his return to the presidency. (Photo by Denis Sinyakov/Reuters) 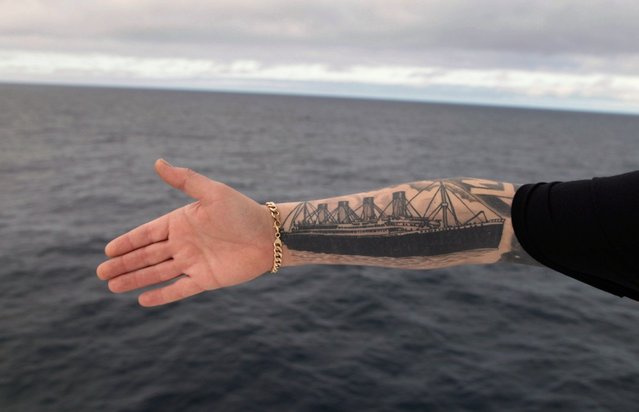 Derek Chambers from Belfast shows his tattoo of the Titanic, aboard the MS Balmoral Titanic memorial cruise ship in the Atlantic Ocean, on April 12, 2012. Nearly 100 years after the Titanic went down, the cruise with the same number of passengers aboard set sail to retrace the ship's voyage, including a visit to the location where it sank. (Photo by Lefteris Pitarakis/AP Photo) 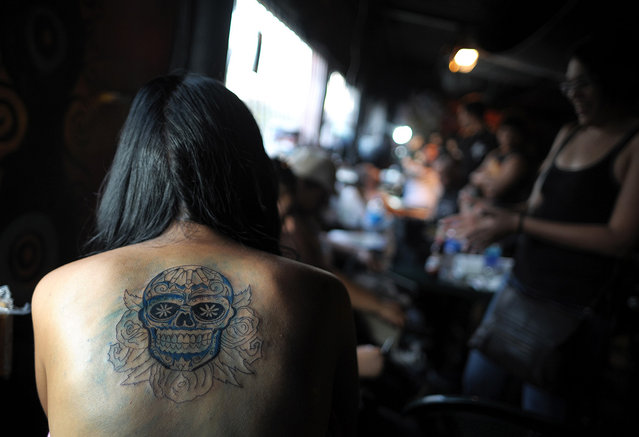 A woman takes a rest as she has her back tattooed during the San Salvador Tattoo Fest in San Salvador, on March 3, 2012. The tattoo festival aimed to promote tattoo art in the rather conservative Salvadorean society. (Photo by Jose Cabezas/AFP) 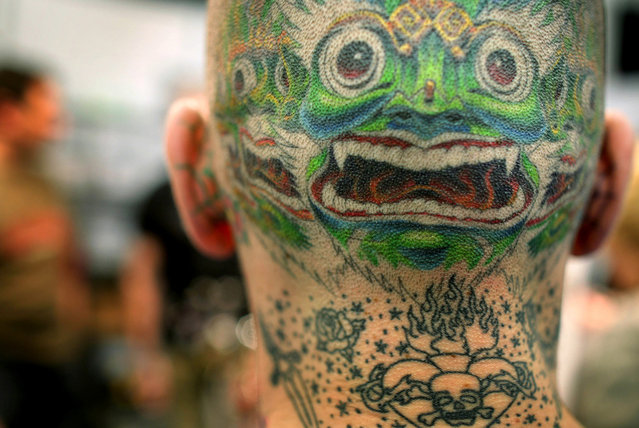 A man from Budapest sporting a tattoo on the back of his head, attends the 13th International tattoo convention in Frankfurt May 8, 2005. (Photo by Kai Pfaffenbach/Reuters) 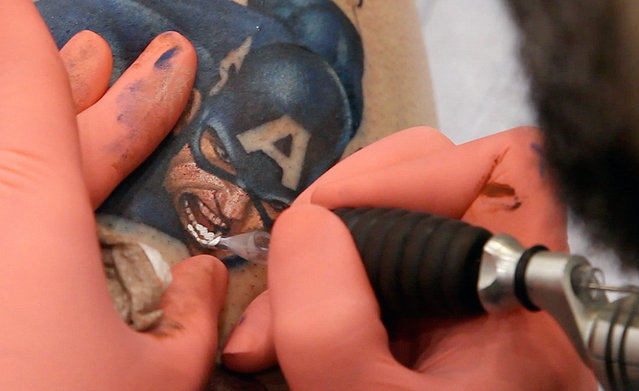 A tattoo of Captain America drawn by artist Sean Karon on the leg of client Ron Raucci at the Hampton Roads Tattoo Festival in Virginia, on March 2, 2012. The tattoo was completed from start to finish in one five-and-a-half hour session and won the prestigious “tattoo of the day” contest. (Photo by Jason Reed/Reuters) 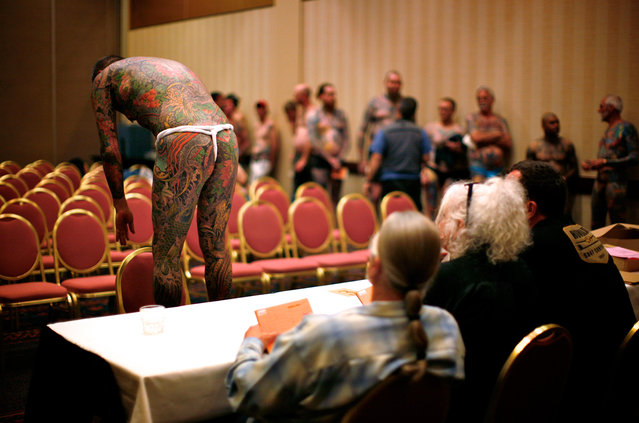 Contestant Yoshi shows off the back of his full-body tattoo to judges at the National Tattoo Association Convention in Cincinnati, Ohio, on April 13, 2012. Yoshi, from Japan, was tattooed by Horiyoshi III and is a multi-award winning contestant in the world of full-body tattoos. In Cincinnati he won third place in the “Best Tattooed Male” category. Picture taken April 13, 2012. (Photo by Jason Reed/Reuters) 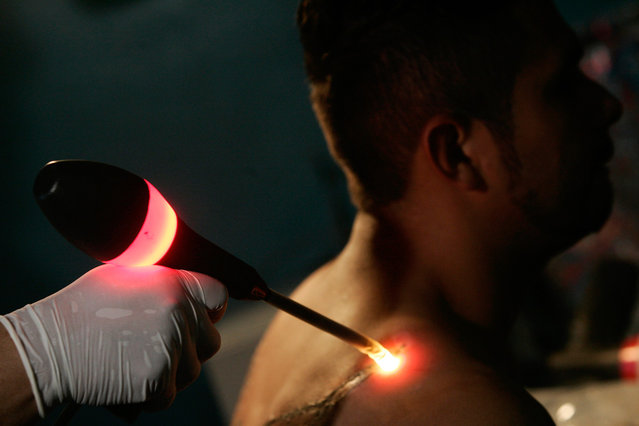 A former gang member has a tattoo characteristic of the Mara Salvatrucha street gang erased with an infrared ray, which burns the top layer of skin off, at a clinic in Chamelecon, in San Pedro Sula, Honduras, on January 28, 2008. Former gang members and other people with tattoos go through the painful process of having the tattoos removed to improve their chances of employment or to make them less easy to be identified as illegal migrants in the U.S. The gang members in the tattoo removal clinic say active gang members who have their tattoos removed are sometimes murdered by other gang members. (Photo by Edgard Garrido/Reuters)
Edit Del
19 Aug 2012 10:13:00, post received 0 comments
Publication archive:
←   →
Popular tags:
All tags
Last searches: