Kazakh troops march during a parade of the armed forces to mark the Defender of the Fatherland Day in Astana, May 7, 2014. (Photo by Mukhtar Kholdorbekov/Reuters) 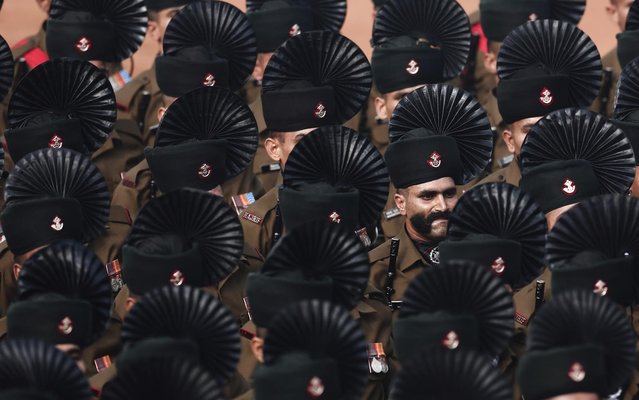 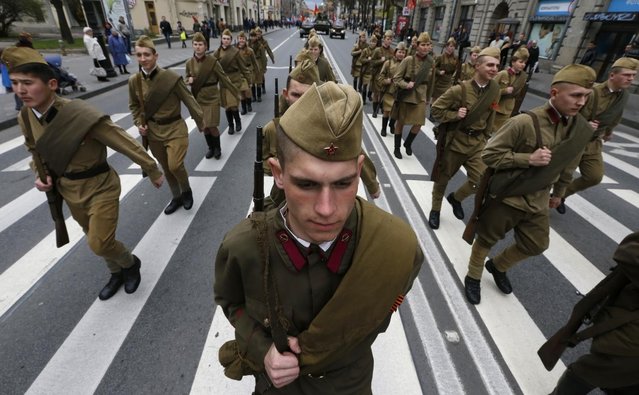 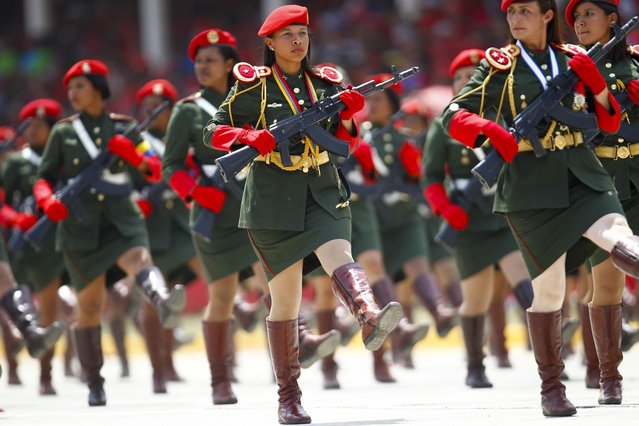 Venezuelan soldiers march during a military parade to commemorate the first anniversary of the death of Venezuela's late president Hugo Chavez in Caracas March 5, 2014. (Photo by Carlos Garcia Rawlins/Reuters) 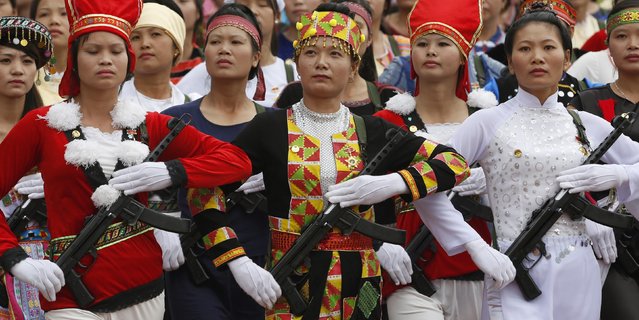 Vietnamese female militants, dressed in ethnic minorities costumes, hold rifles while marching during the 60th anniversary celebrations of the Dien Bien Phu battle in the historic city May 7, 2014. (Photo by Reuters/Kham) 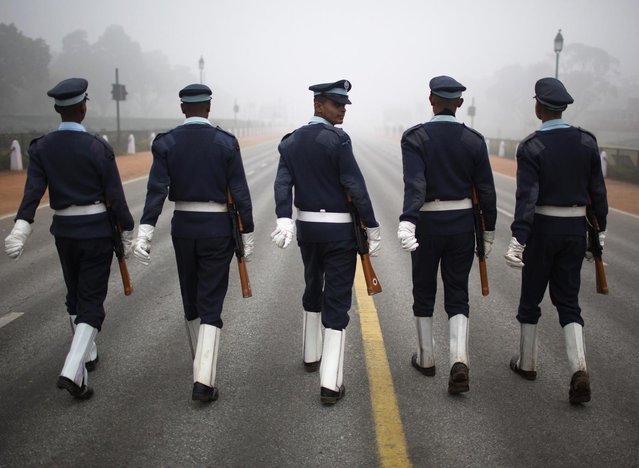 Indian soldiers march during the rehearsal for the Republic Day parade amid fog on a cold winter morning in New Delhi January 6, 2014. (Photo by Ahmad Masood/Reuters) 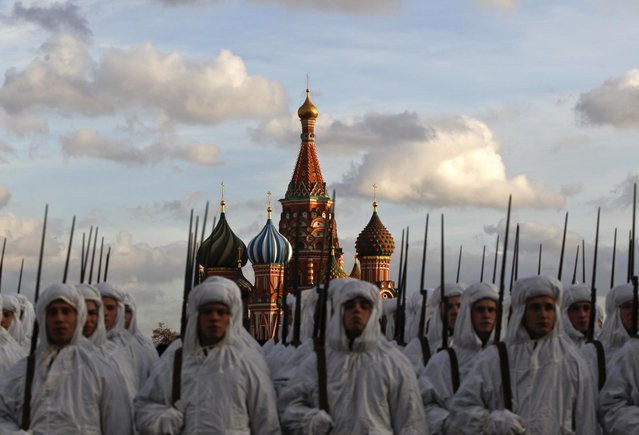 Russian servicemen, dressed in historical uniforms, take part in a military parade rehearsal in Red Square, with the St Basil's Cathedral seen in the background, in Moscow, November 1, 2013. (Photo by Maxim Shemetov/Reuters) 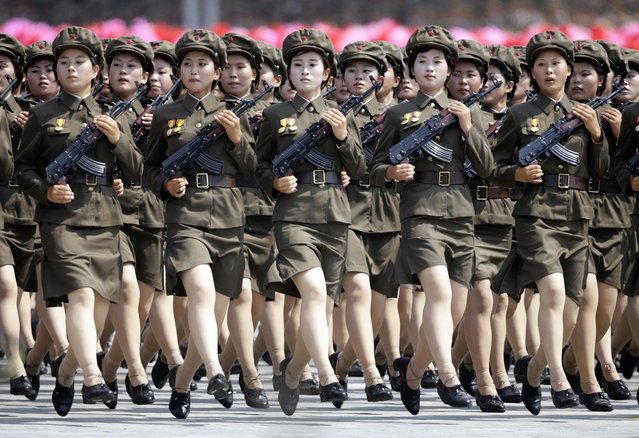 North Korean soldiers parade to mark the 60th anniversary of the signing of a truce in the 1950-1953 Korean War at Kim Il-sung Square, in Pyongyang July 27, 2013. (Photo by Jason Lee/Reuters) 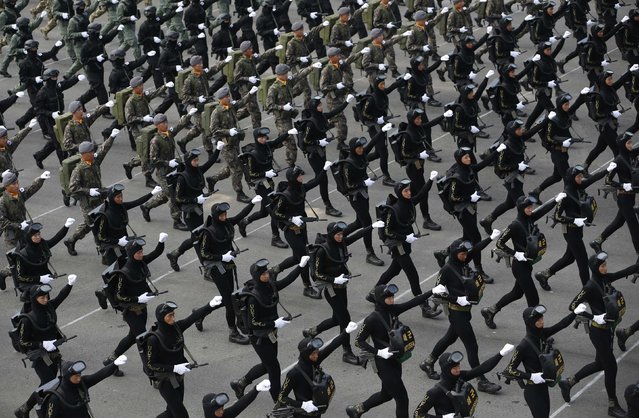 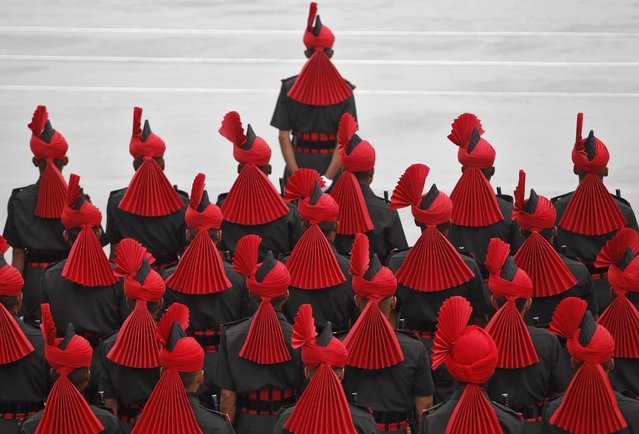 Indian army recruits stand at attention as they take part in a passing out parade at a garrison in Rangreth on the outskirts of Srinagar July 10, 2013. (Photo by Danish Ismail/Reuters) 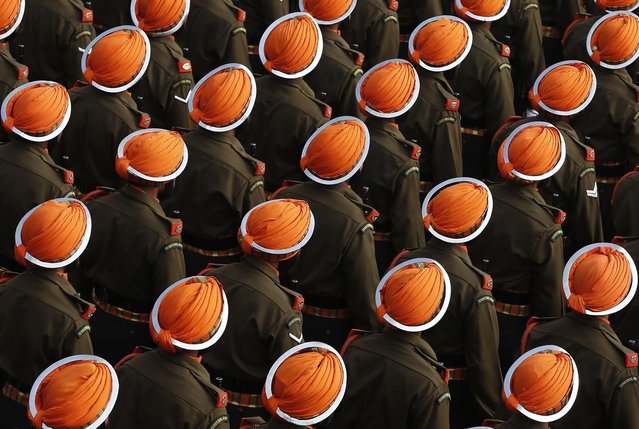 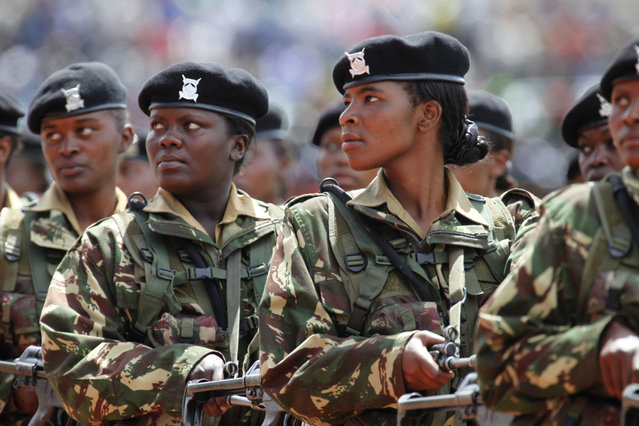 Kenya women army soldiers during march past at the Nyayo National Stadium, in Nairobi, on June 1, 2012, during the 49th Madaraka Day celebrations, which marks the independence from British rule. (Photo by Sayyid Azim/AP Photo) 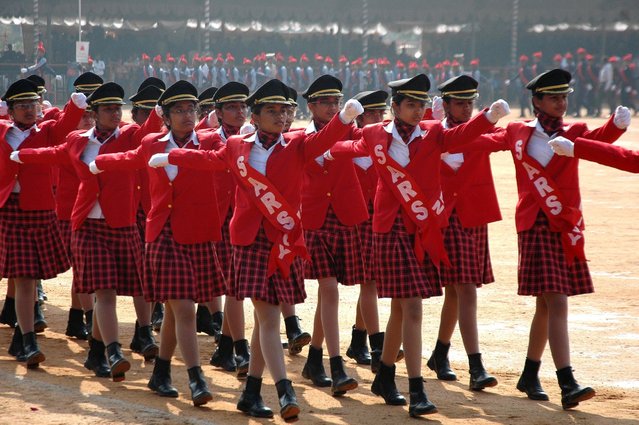 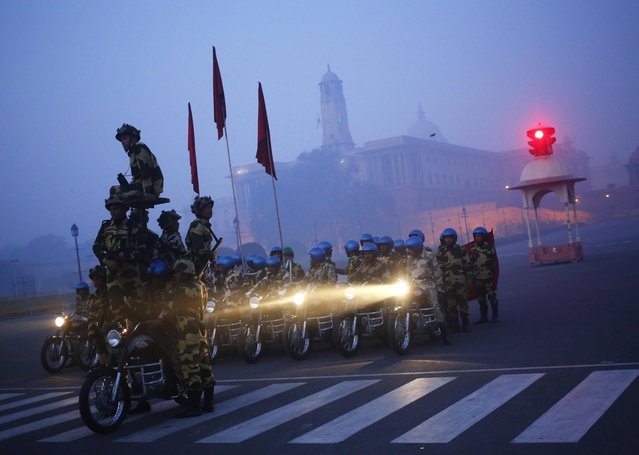 Indian soldiers take part in the rehearsal for the Republic Day parade on a cold winter morning in New Delhi January 13, 2014. (Photo by Anindito Mukherjee/Reuters) 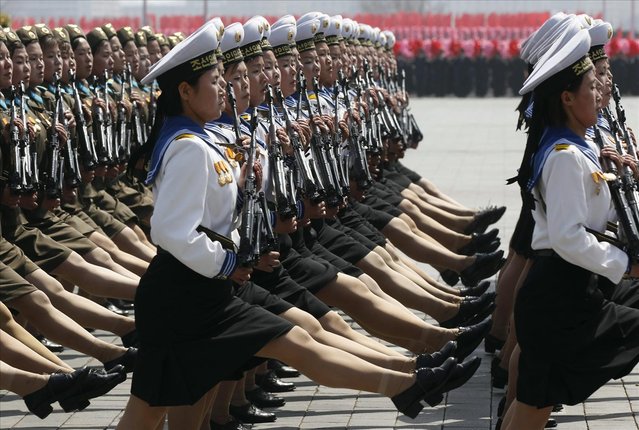 Soldiers march past the podium during a military parade to celebrate the centenary of the birth of North Korea's founder Kim Il-sung in Pyongyang April 15, 2012. (Photo by Bobby Yip/Reuters) 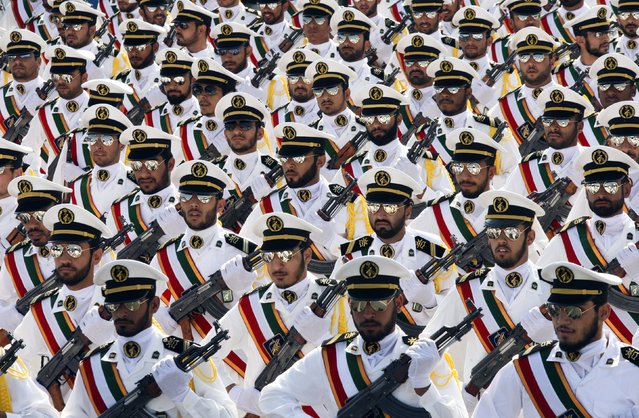 Members of the Iranian Revolutionary Guard Navy march during a parade to commemorate the anniversary of the Iran-Iraq war in Tehran on September 22, 2011. (Photo by Reuters/Stringer) 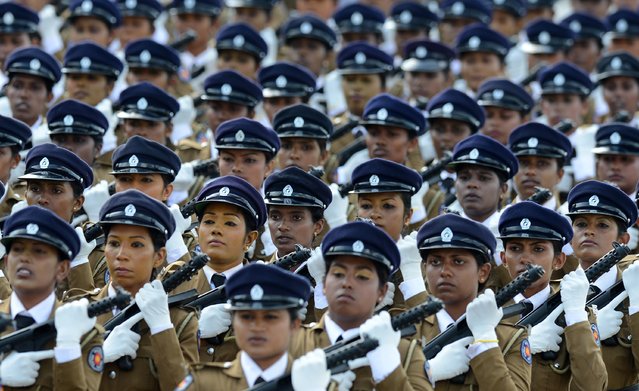 Sri Lankan policewomen march during a Victory Day parade in the southern town of Matara on May 18, 2014. (Photo by Lakruwan Wanniarachchi/AFP Photo) 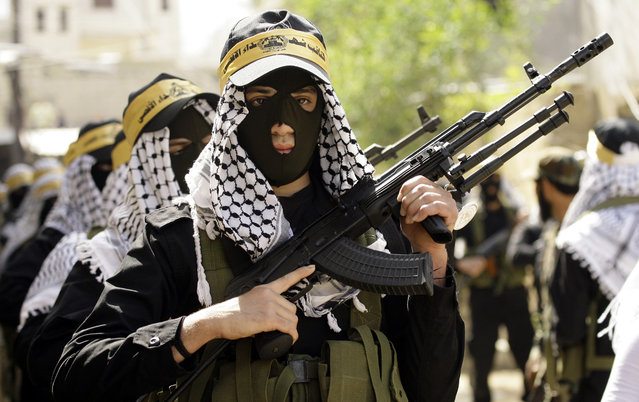 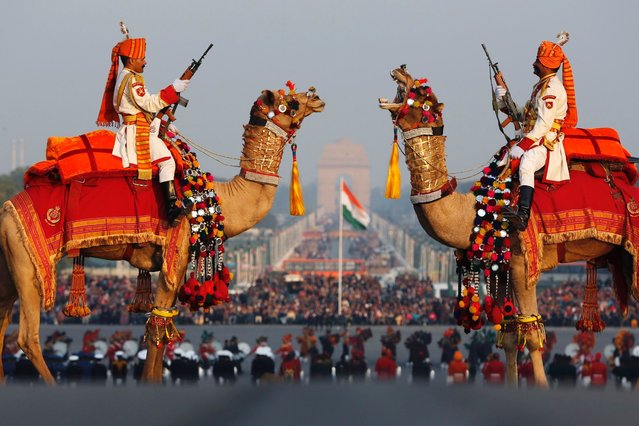 India's Border Security Force soldiers ride their camels as they rehearse for the “Beating the Retreat” ceremony in New Delhi January 27, 2013. (Photo by Adnan Abidi/Reuters) 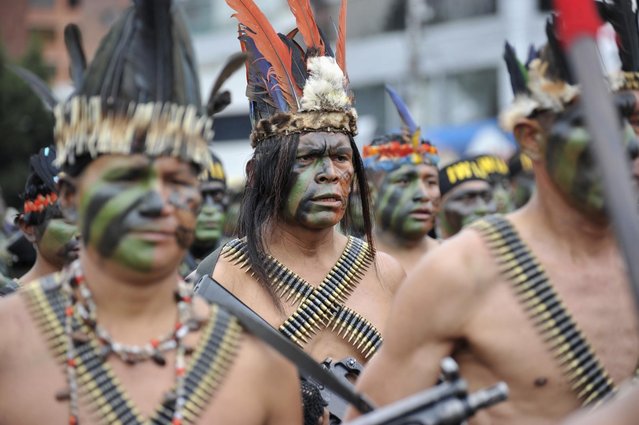 Ecuadorian Shuar Indian soldiers participate in a military parade to commemorate the Battle of Pichincha of May 24, 1822 in Quito May 24, 2012. (Photo by Gary Granja/Reuters) 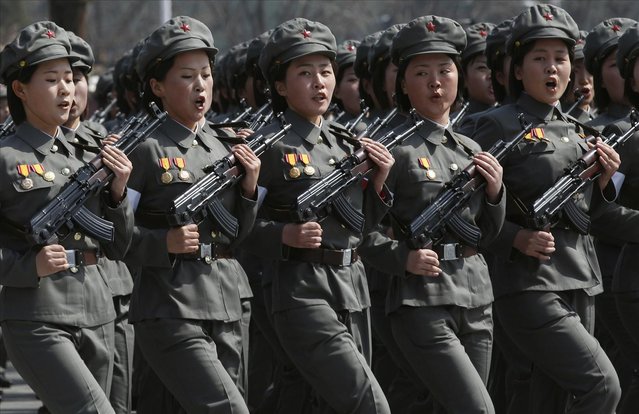 Soldiers shout as they march past the podium during a military parade to celebrate the centenary of the birth of North Korea's founder Kim Il-sung in Pyongyang April 15, 2012. (Photo by Bobby Yip/Reuters)
Edit Del
24 Sep 2014 12:31:00, post received 0 comments
Publication archive:
←   →
Popular tags:
All tags
Last searches: