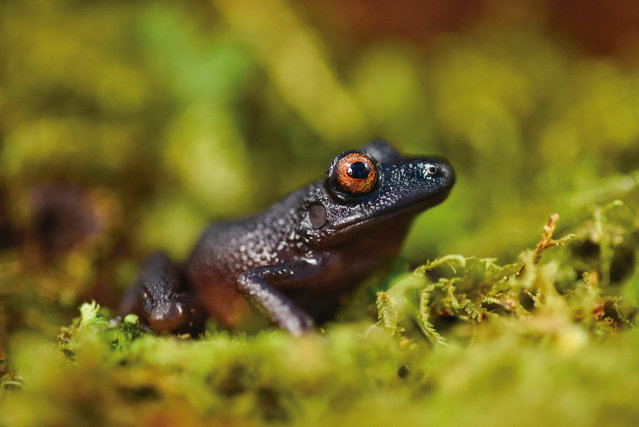 The “devil-eyed” frog (Oreobates zongoensis), which was previously known only from a single individual observed more than 20 years ago in the Zongo Valley, was rediscovered on the Zongo RAP expedition in Bolivia. It was found to be relatively abundant in the cloud forest where it had not been seen for more than 20 years. Its elusive nature may be partly due to its habit of hiding beneath the thick moss and humus surrounding the roots of bamboo. (Photo by Steffen Reichle/Ecological SWAT team) 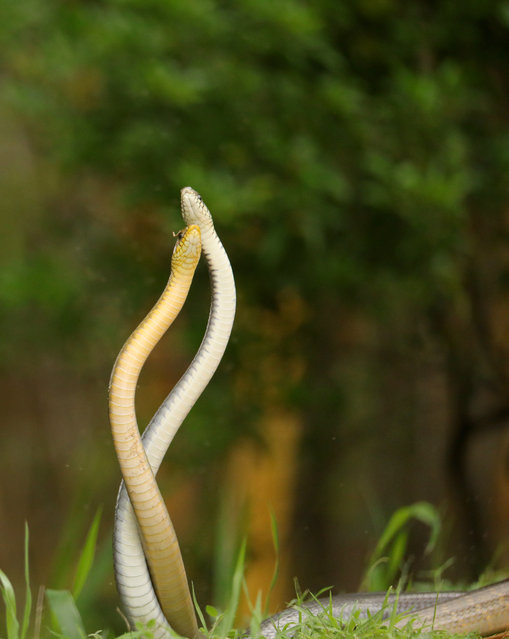 The Oriental or Indian ratsnake (Ptyas mucosa) is a reptile from Sri Lanka, found from the suburbs of Colombo to national parks. This pair of mating ratsnakes swaying to and fro, locked in a mesmerising dance, is a rare sight to capture in central Sri Lanka. Their colouring, however, cannot be used to distinguish between the two sexes, as ratsnakes have been recorded in a range of colours, from black to golden brown. (Photo by Jetwing Vil Uyana/Courtesy of Chaminda Jayasekara) 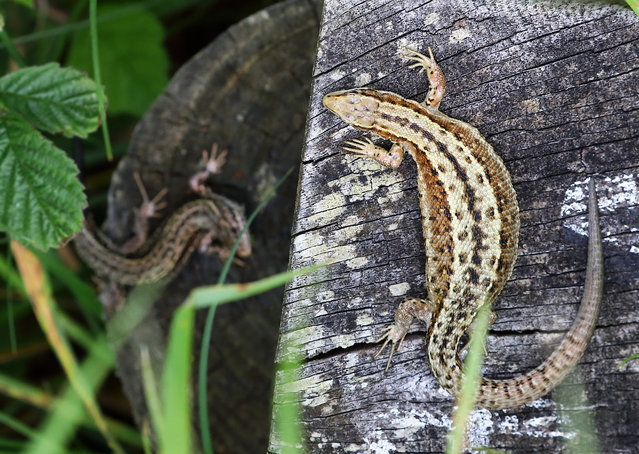 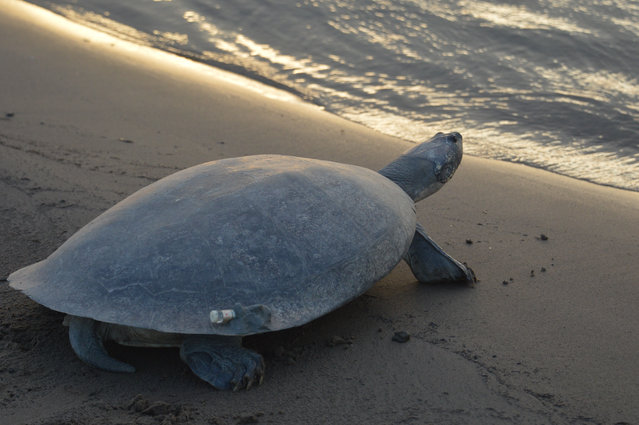 A giant South American river turtle (Podocnemis expansa), equipped with a tiny acoustic transmitter, lumbers back to its watery home in the Meta River in eastern Colombia. Scientists have been fitting turtles with the devices to better understand the movements of the species, which is the largest freshwater turtle in Latin America. (Photo by WCS/The Guardian) 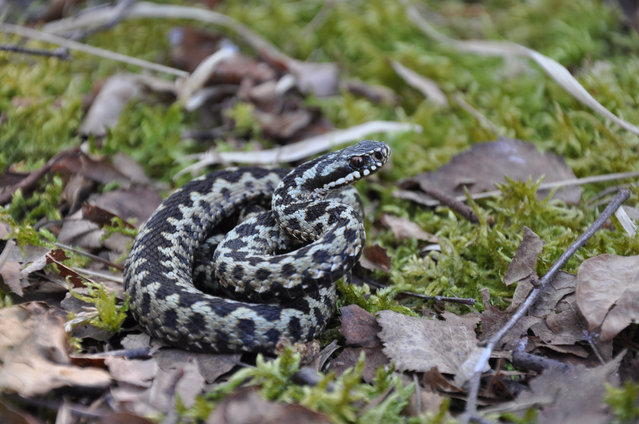 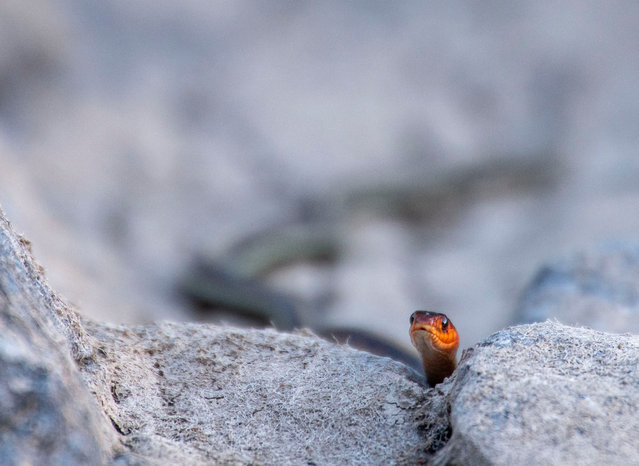 As dusk falls, a cautious red-sided garter snake moves towards its resting place under a rock after an evening of hunting in the shallows of the Umpqua River near Elkton, Oregon. (Photo by Robin Loznak/PA Wire Press Association) 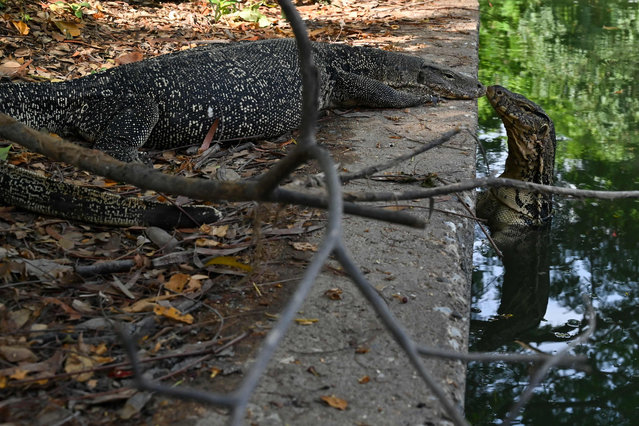 Monitor lizards rest by the lagoon in Lumpini Park, which was reopened after the Thai government relaxed measures to combat the spread of the COVID-19 novel coronavirus, in Bangkok on May 12, 2020. (Photo by Romeo Gacad/AFP Photo) 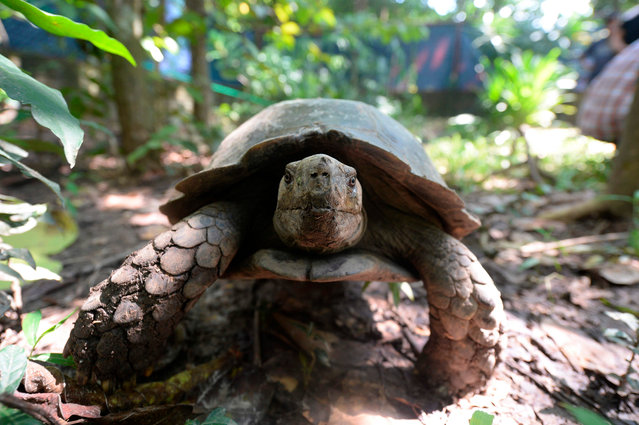 In this picture taken on October 12, 2019, an Asian giant tortoise is pictured at the Turtle Conservation Centre at a forest reserve in Rajendrapur, some 40 kilometres (25 miles) north of capital Dhaka. The newly hatched tortoises take their first steps in a small box, their feet barely visible under bony shells. These little giants – among 41 babies born to several Asian Forest Tortoises brought together at a conservation park in Bangladesh – carry the weight of their species on their backs. (Photo by Munir Uz Zaman/AFP Photo) 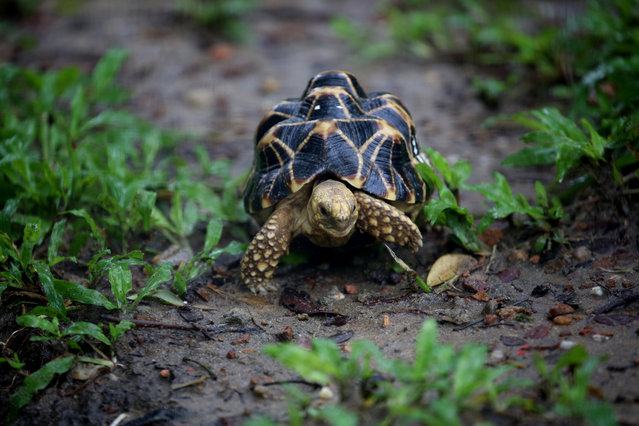 A star tortoise at the Zoological Gardens in Yangon, Myanmar. All international trade in the Indian star tortoise – an animal valued in the pet trade – has been banned by the convention on international trade in endangered species (Cites). Shark and otter species were given new protections too but moves to protect glass frogs and the woolly mammoth were defeated at the summit of the 183 nations. (Photo by U Aung/Xinhua News Agency/Alamy Stock Photo) 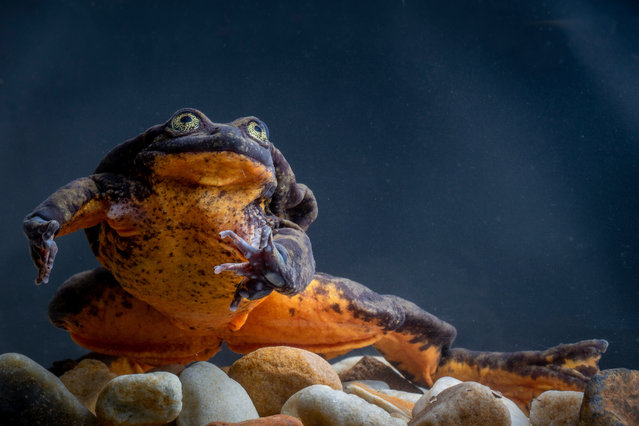 For 10 years, Romeo, the last known Sehuencas water frog on the planet, led a solitary life in a conservation centre in Bolivia. Now scientists have found him a Juliet on an expedition into Bolivia’s cloud forest. (Photo by Robin Moore/Global Wildlife Conservation) 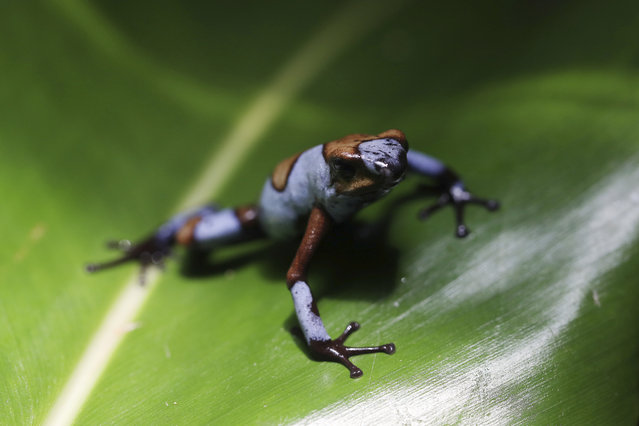 An Oophaga histrionica blue stands at the “Tesoros de Colombia” frog breeding center in Cundinamarca, Colombia, Tuesday, April 23, 2019. The blue is a of poison dart frog endemic to the Choco region of western Colombia. (Photo by Fernando Vergara/AP Photo) 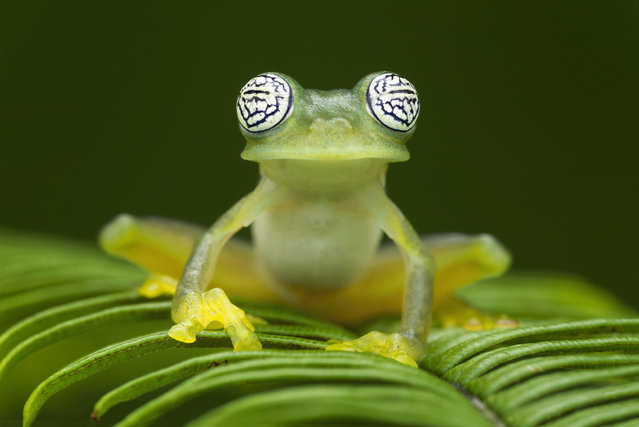 A ghost glass frog in the Chocó rainforest, Ecuador in November 2020. The marbled swirling “hypnotising” eyes are thought to be helpful in attracting a mate. (Photo by David Weiller/WENN) 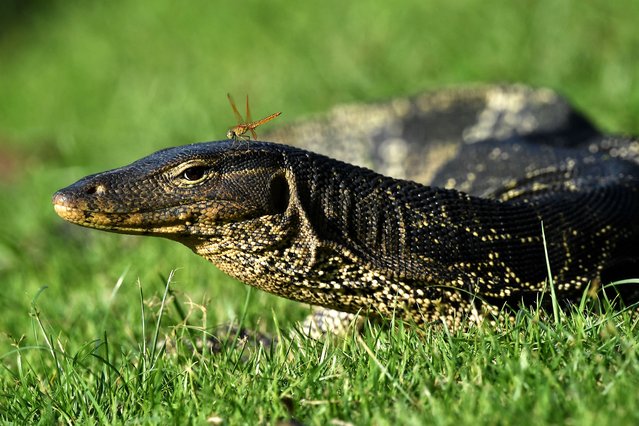 This picture taken on January 8, 2022 shows a dragonfly perching on the head of a monitor lizard in Queen Sirikit Park in Bangkok. (Photo by Lillian Suwanrumpha/AFP Photo) 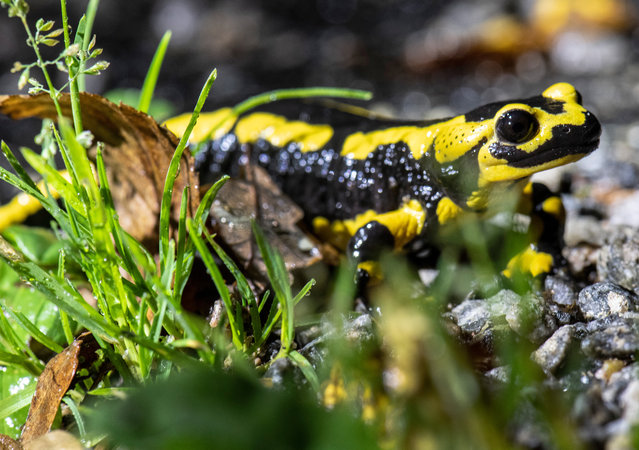 A fire salamander crawls along a forest path in pouring rain in Oppenau, Baden-Württemberg, southwest Germany on October 1, 2019. The animals are often found on the road at night, making them vulnerable to traffic. (Photo by Boris Roessler/dpa) 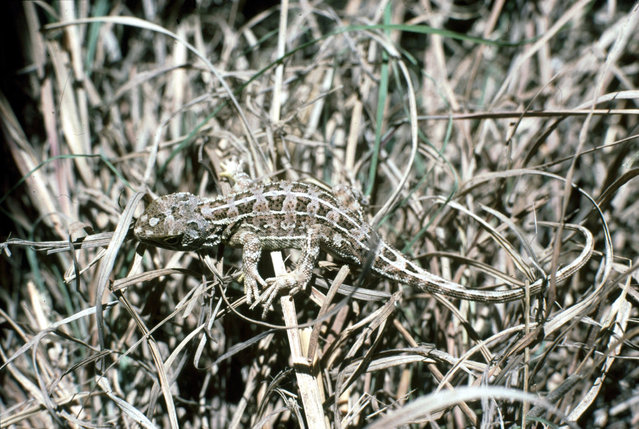 A grassland earless dragon, which may become the first reptile on mainland Australia to be declared extinct. (Photo by Will Osborne/BirdLife International) 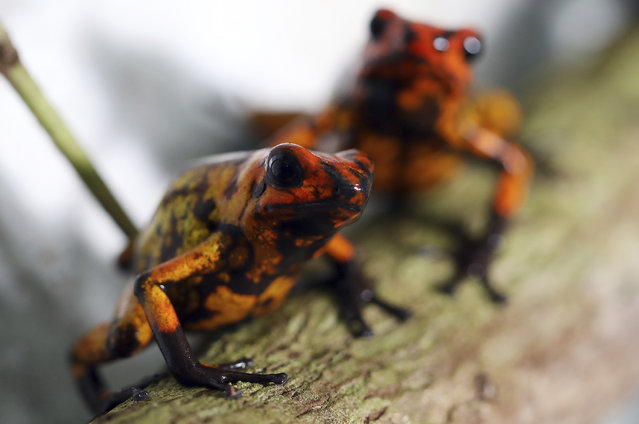 Oophaga histrionica red head frogs stand inside the glass container where they are bred at the “Tesoros de Colombia” frog breeding center in Cundinamarca, Colombia, Tuesday, April 23, 2019. According to Julio Rodriguez, an experienced New York City collector, since “Tesoros de Colombia” began exporting to the U.S. the price tag for the histrionicas dropped by 50 percent. (Photo by Fernando Vergara/AP Photo) 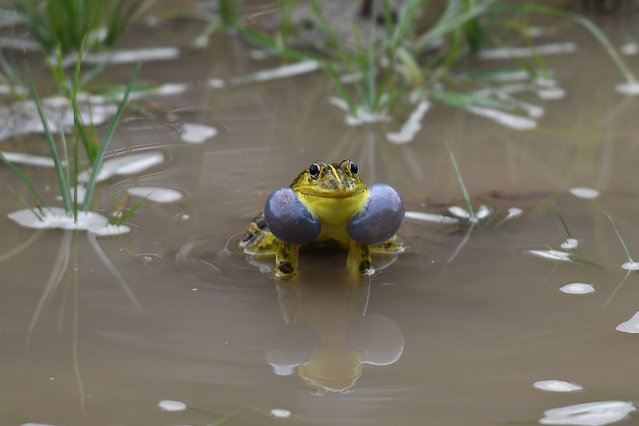 A male frog calls for mating inside a puddle of water in Ghaziabad on July 5, 2020. (Photo by Prakash Singh/AFP Photo) 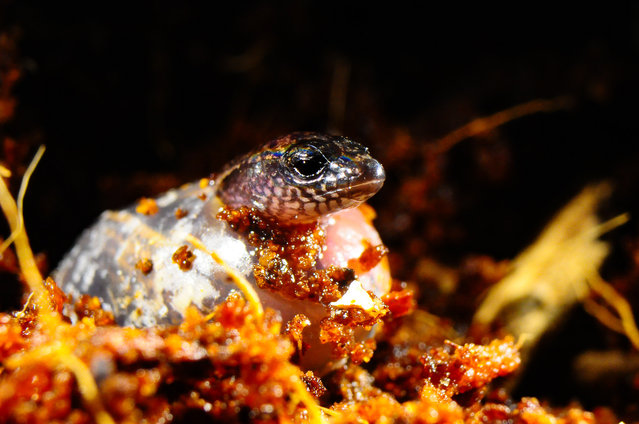 A baby three-toed skink hatches from an egg. Researchers at the University of Sydney in Australia observed the lizard giving birth to eggs followed by a live baby three weeks later from the same pregnancy. (Photo by Nadav Pezaro/AAP) 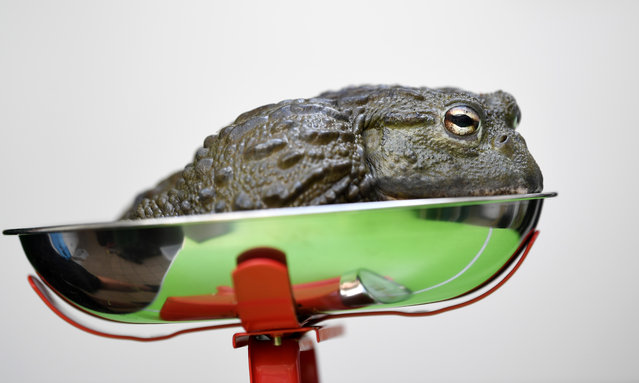 An African bullfrog is weighed at the city’s zoo in London, England on August 22, 2019. (Photo by James Veysey/Rex Features/Shutterstock) 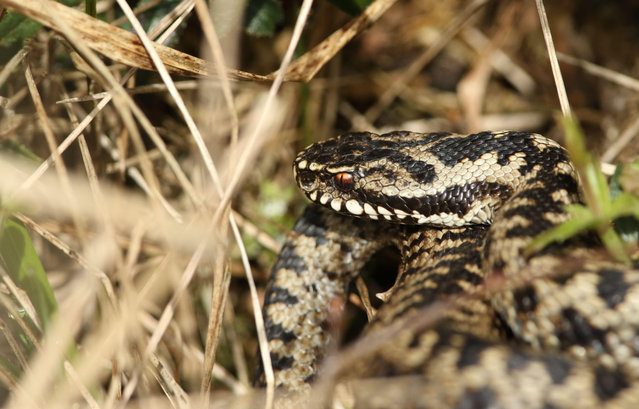