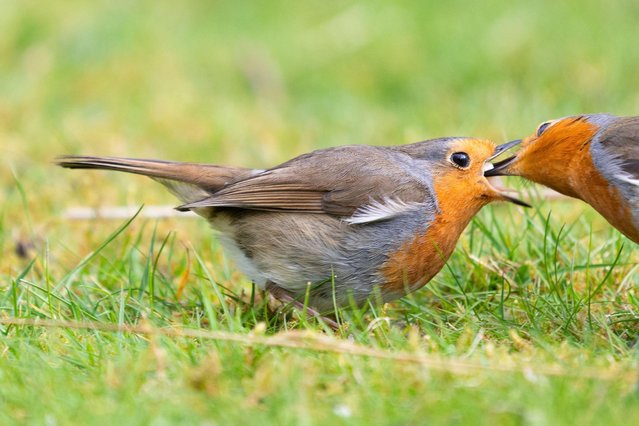 A female robin accepts food from her mate in a garden in Killearn, Stirlingshire, England on April 2020. Courtship feeding strengthens the robins’ bond. (Photo by Kay Roxby/Alamy Live News) 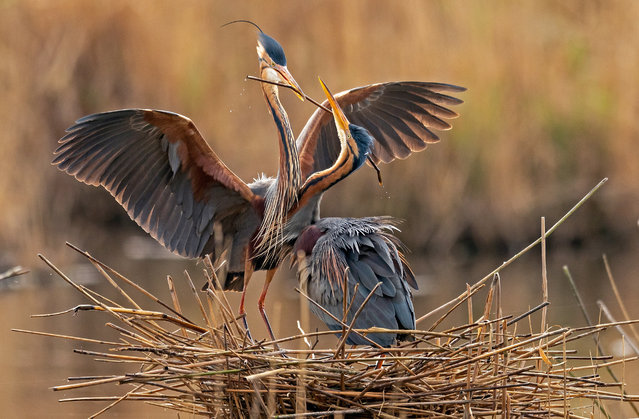 Purple herons (Ardea purpurea) with nesting material flies during breeding season in the nature reserve Wagbachniederung in Waghausel near Karlsruhe, Germany, 13 April 2020. The Wagbachniederung is an important breeding and resting place in Europe for breeding birds, which are endangered by extinction, and is one of the most important bird protection areas in Germany. (Photo by Ronald Wittek/EPA/EFE) 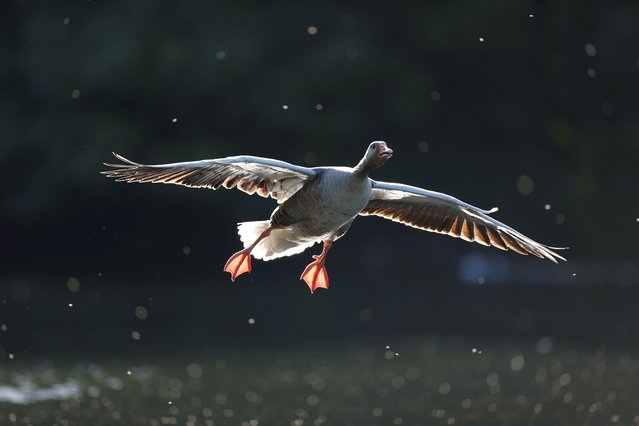 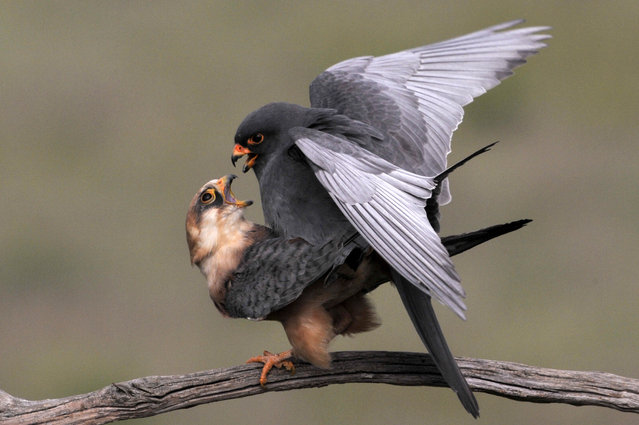 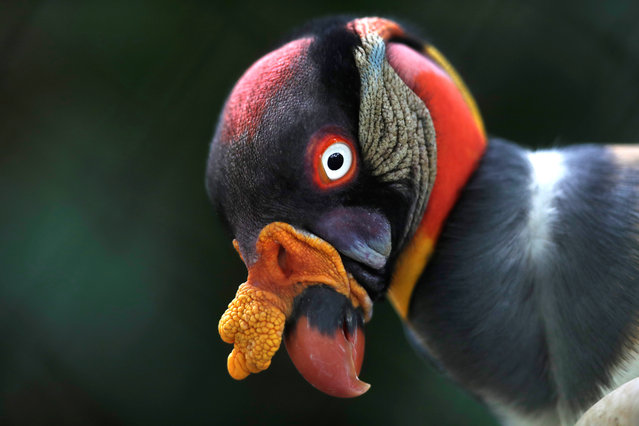 A Gallinazo Rey at the Summit Municipal Park in Panama City, Panama, 14 May 2020. The Summit was created in 1923 by the old Panama Canal company, as the Summit Experimental Farm, to test the adaptation of plant species from different parts of the world to the tropical climate of Panama and has a small sample of birds, reptiles, mammals and plants. The gates of this park have been closed since a total quarantine of the COVID-19 disease was declared in Panama on 25 March. (Photo by Bienvenido Velasco/EPA/EFE) 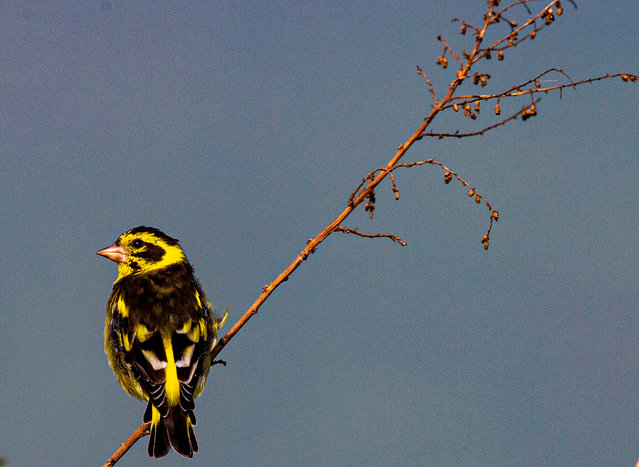 A resident yellow-breasted greenfinch passerine bird perches on a stalk at a forest in Kathmandu, Nepal, 14 May 2020. Nepal is one of the destinations for the summer and winter migratory birds coming from the southern parts of South East Asia as well as from Africa and Australia, due to its favorable breeding environment. According to bird experts, more than 900 birds species have been spotted in Nepal. (Photo by Narendra Shrestha/EPA/EFE) 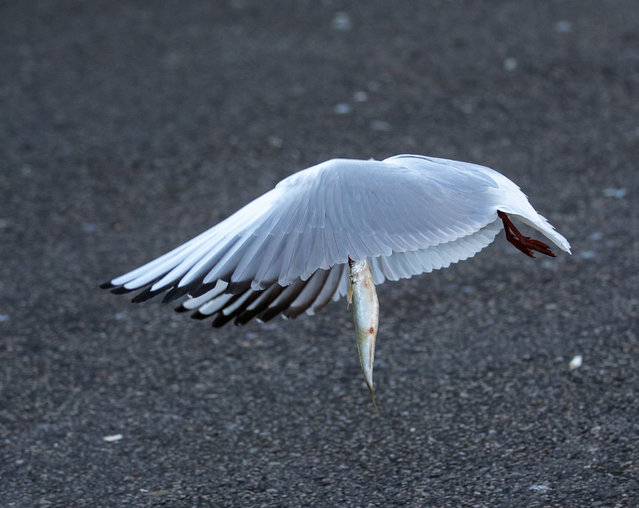 A seagull flaps wings with a fish it received from fish market in the Turkish capital Ankara on March 03, 2020. Ankara is a city located in the center of Turkey with a nearest coastline 270 kilometers away. (Photo by Aytac Unal/Anadolu Agency via Getty Images) 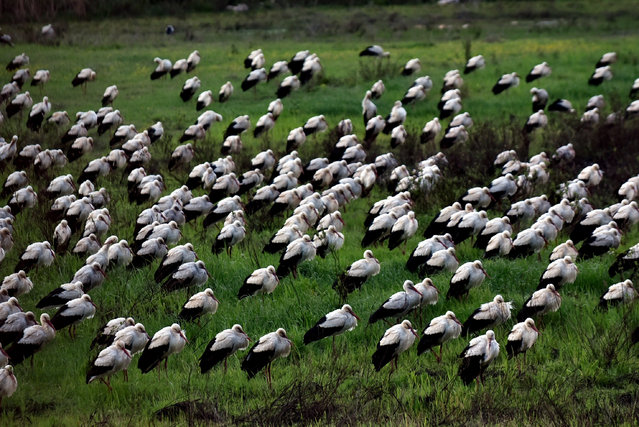 Storks land to sleep in Karadut area in Akdeniz district of Turkey's Mersin on March 21, 2020 as they migrate to warmer regions. (Photo by Serkan Avci/Anadolu Agency via Getty Images) 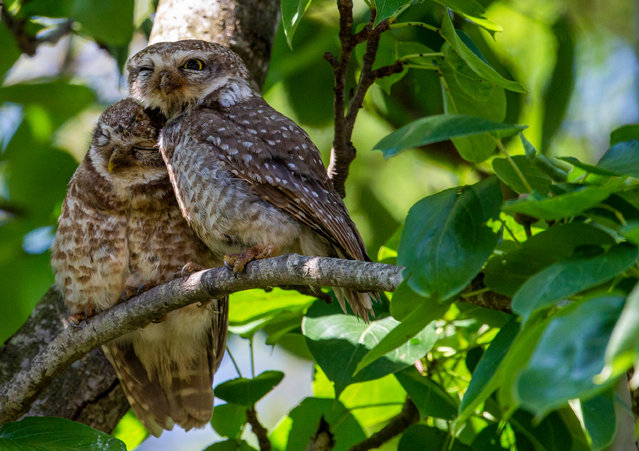 A couple of spotted owls (Strix occidentalis) cuddle while perched on a tree branch in Kathmandu, Nepal, 06 May 2020. Nepal is a main destination for migratory birds coming from the southern parts of Southeast Asia as well as from Africa and Australia, due to its favorable breeding environment. According to ornithologists, more than 900 birds species have been spotted in Nepal. (Photo by Narendra Shrestha/EPA/EFE) 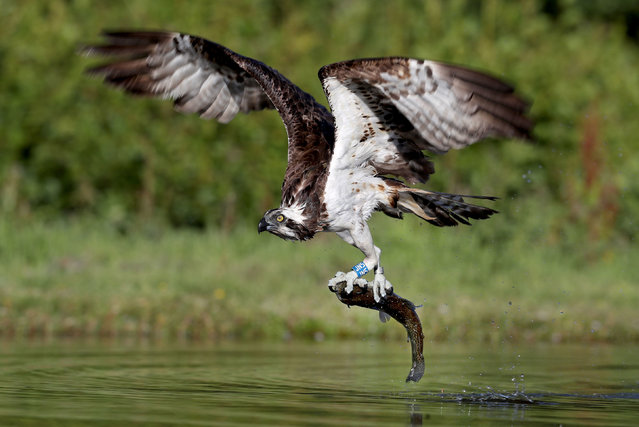 An Osprey catches a Rainbow Trout in a loch near Aviemore in the Cairngorms, England on June 25, 2018, as the birds are busy fishing at this time of year for their young. (Photo by Jane Barlow/PA Images via Getty Images) 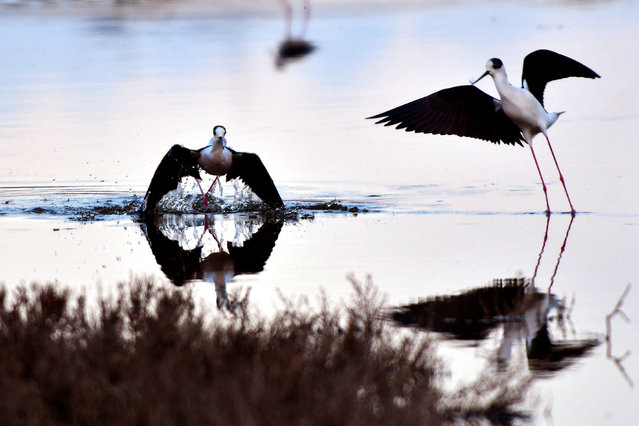 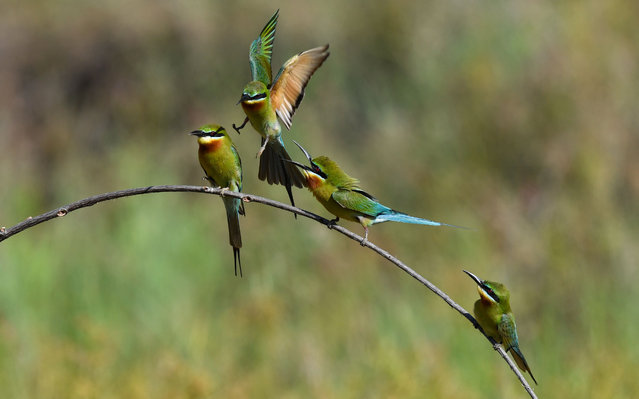 Blue-tailed bee eaters are seen in Haikou, south China's Hainan Province, May 7, 2020. Every year from spring to summer, bee eaters usually come to a fixed site for reproduction. Local authorities of Haikou has made full preparations for bee eaters to build a better habitat during their breeding season. (Photo by Xinhua News Agency/Rex Features/Shutterstock) 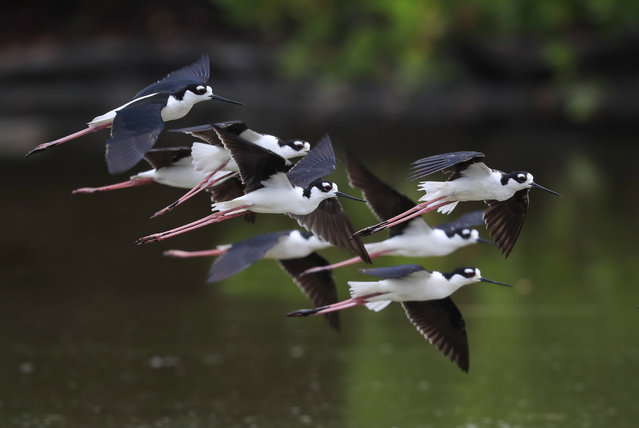 A group of birds are seen inside of a mangrove swamp in Baja Mar west of San Jose, Costa Rica, 07 May 2020 (Issued 09 May 2020). This Satu​rday the international day of migratory birds is celebrated. (Photo by Jeffrey Arguedas/EPA/EFE) 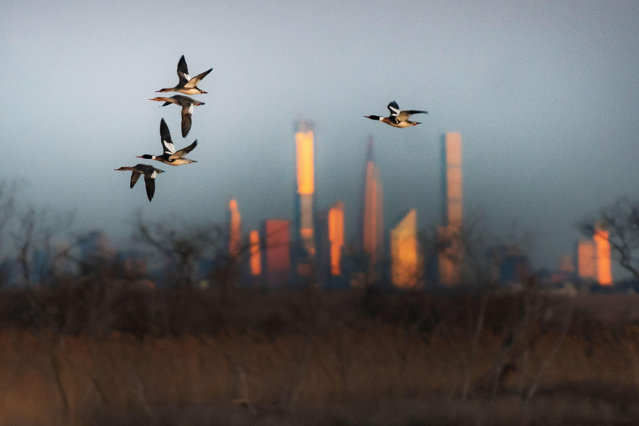 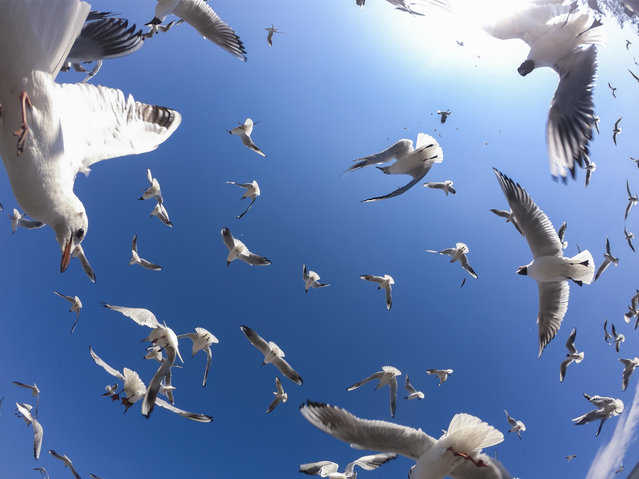 Seagulls take off from a fish market in the Turkish capital Ankara on March 07, 2020. Ankara is a city located in the center of Turkey with a nearest coastline 270 kilometers away. (Photo by Aytac Unal/Anadolu Agency via Getty Images) 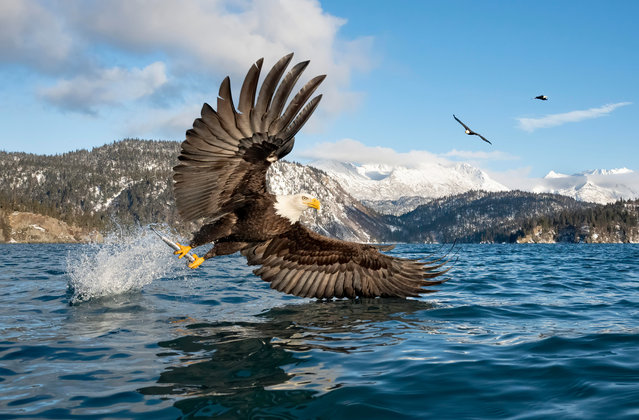 A bald eagle takes off with its catch, Alaska, US. (Photo by Alan Murphy/Media Drum Images) 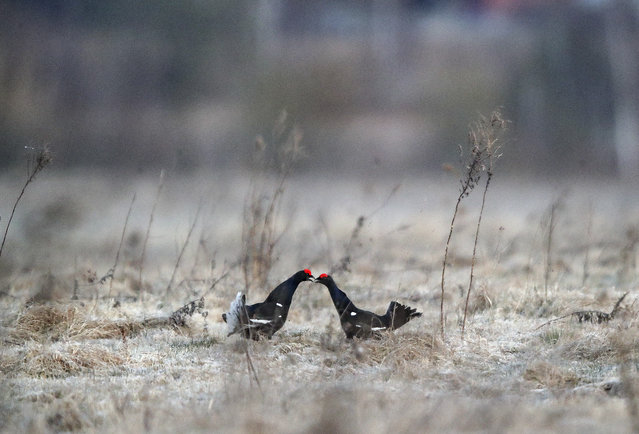 Black grouses outside the village of Khotenchitsy in Minsk Region, Belarus on April 9, 2020. (Photo by Natalia Fedosenko/TASS) 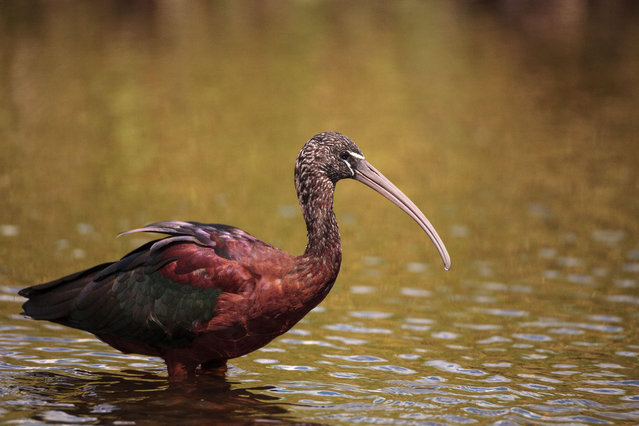 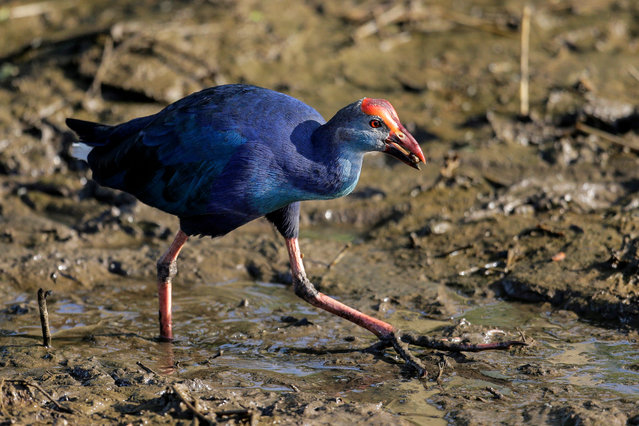 A Purple Swamphen (Porphyrio porphyrio) also known as the Purple coot searches for food on the Diyawanna Oya wetland in the suburb of Colo​mbo, Sri Lanka, 06 January 2020. (Photo by Chamila Karunarathne/EPA/EFE) 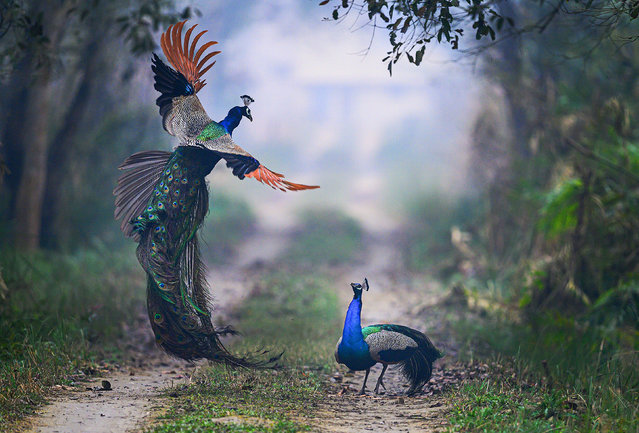 A peacock leaps into the air as it battles a rival over territory on a foggy morning. The brightly coloured bird jumped almost six feet into the air before crashing down on its opponent. The fight was captured by amateur photographer Nilesh Patel, in Dudhwa National Park, India. (Photo by Nilesh Patel/Solent News & Photo Agency/Solent News)
Edit Del
24 May 2020 00:01:00, post received 0 comments
Publication archive:
←   →
Popular tags:
All tags
Last searches: