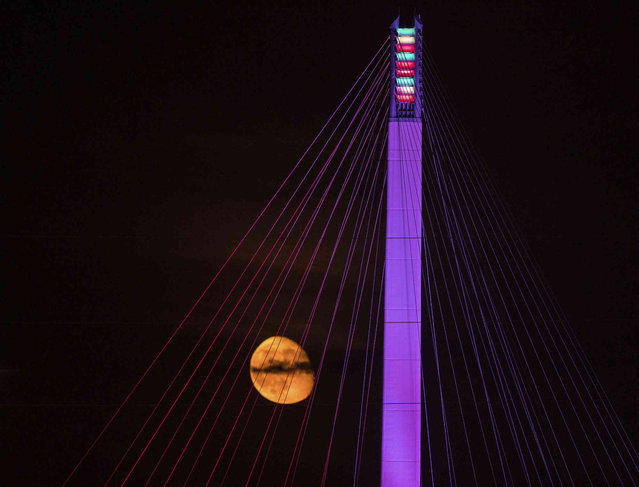 The moon rises over the Bob Kerrey Pedestrian Bridge in the early morning hours on Friday, June 21, 2019 in Omaha. Neb. (Photo by Chris Machian/Omaha World-Herald via AP Photo) 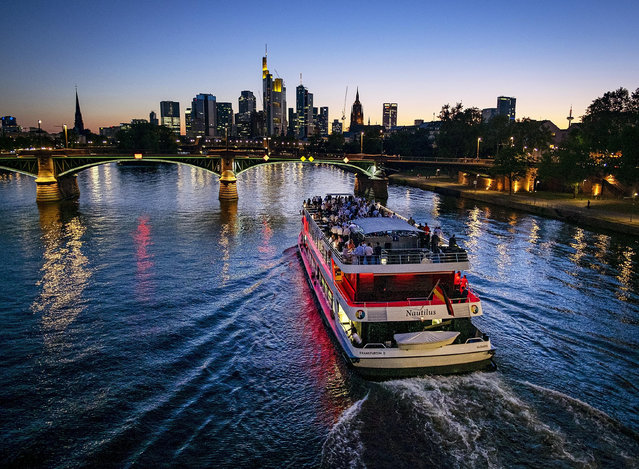 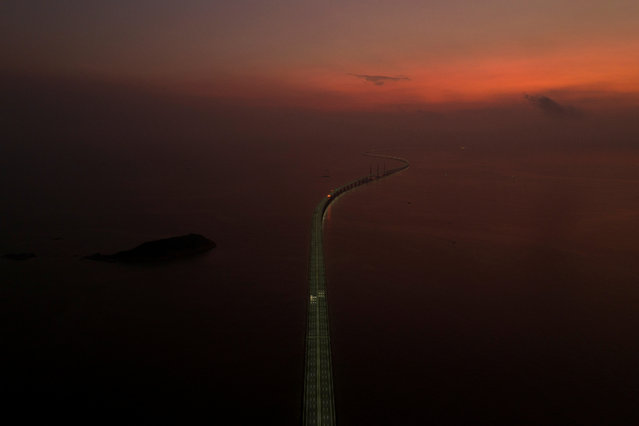 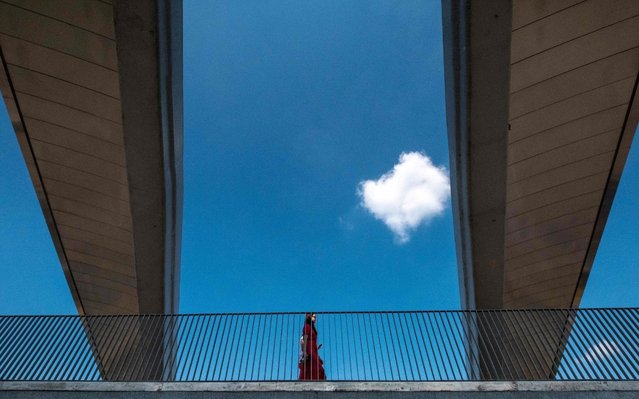 A woman walks under a pedestrian bridge at the Zaryadye Park in downtown Moscow, Russia on August 20, 2019. (Photo by Yuri Kadobnov/AFP Photo) 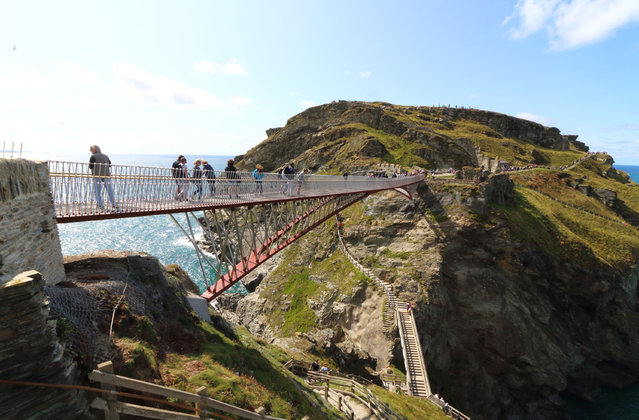 A view of the controversial new footbridge in Cornwall, England on August 12, 2019, reconnecting both halves of Tintagel Castle for the first time in 500 years. The site has long been rumoured to be the site of King Arthur’s legendary Camelot. (Photo by Keith Mayhew/Sopa/Rex Features/Shutterstock) 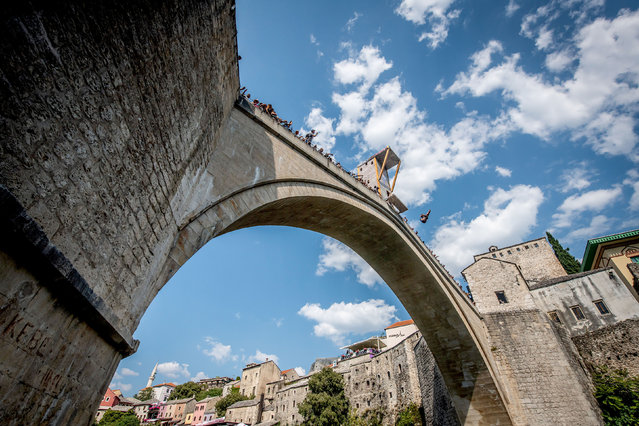 In this handout image provided by Red Bull, Genevieve Bradley of the USA dives from the 21 metre platform on Stari Most during the first training session of the sixth stop of the Red Bull Cliff Diving World Series on August 22, 2019 at Mostar, Bosnia and Herzegovina. (Photo by Romina Amato/Red Bull via Getty Images) 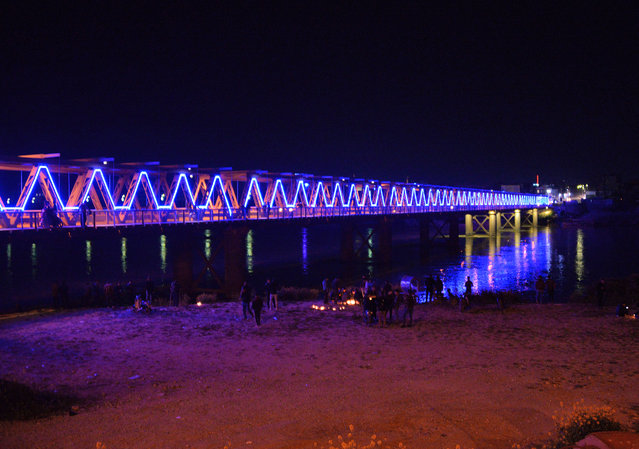 Iraqis stand by the bank of the Tigris river during a vigil for the victims of the capsized ferry in the northern Iraqi city of Mosul on March 22, 2019, a day following the incident which left at least 100 people dead, as the ferry was packed with families celebrating Kurdish New Year. (Photo by Zaid Al-Obeidi/AFP Photo) 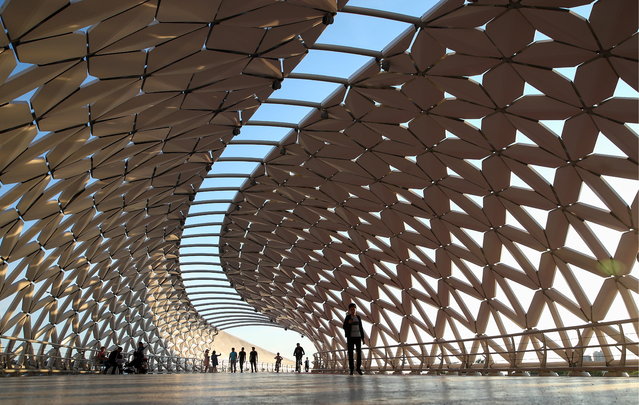 A view of Atyrau Bridge across the Ishim River in Nur-Sultan, Kazakhstan on June 12, 2019. (Photo by Valery Sharifulin/TASS) 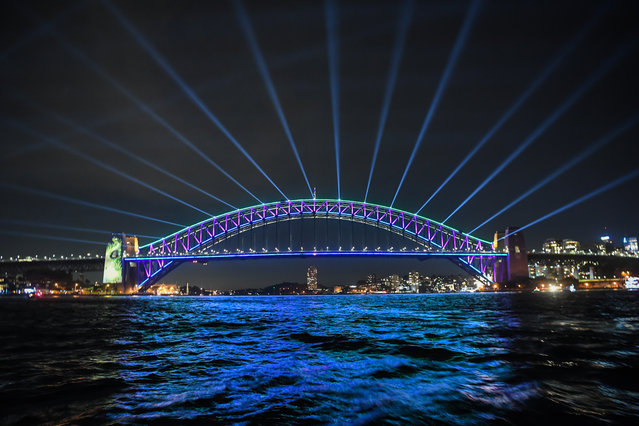 The Harbour Bridge is lit with special lighting during the media preview of Vivid Sydney on May 23, 2019 in Sydney, Australia. “Vivid Sydney” runs from May 24 throughout the city and suburbs of Sydney with hundreds of illuminated buildings and exhibits which attract hundreds of thousands of visitors each year. (Photo by James D. Morgan/Getty Images) 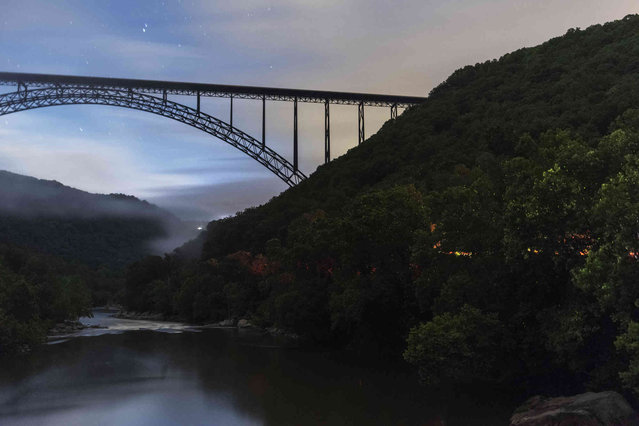 In this Wednesday, June 19, 2019 photo taken with a slow shutter speed, thousands of lightning bugs light up the trees along the New River Gorge as the New River Gorge bridge towers above as seen from the Fayette Station Road bridge in Fayetteville, W.Va. (Photo by Craig Hudson/Charleston Gazette-Mail via AP Photo) 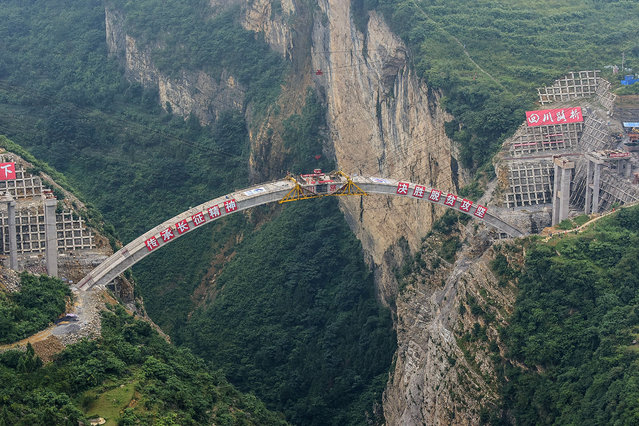 This photo taken on July 7, 2019 shows the main structure of the Jimingsansheng Bridge as it is joined together in Xuyong county in Luzhou City in China's southwestern Sichuan province. The bridge joins southwest China's Yunnan, Guizhou and Sichuan provinces. (Photo by AFP Photo/China Stringer Network) 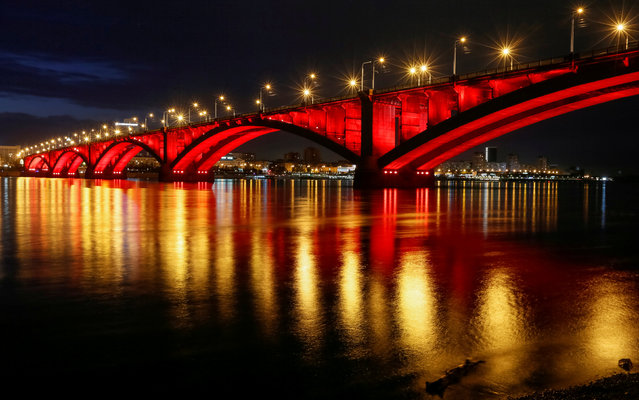 A general view shows a bridge across the Yenisei River decorated with new illumination ahead of the 390th city's anniversary in Krasnoyarsk, Siberia, Russia, August 24, 2018. (Photo by Ilya Naymushin/Reuters) 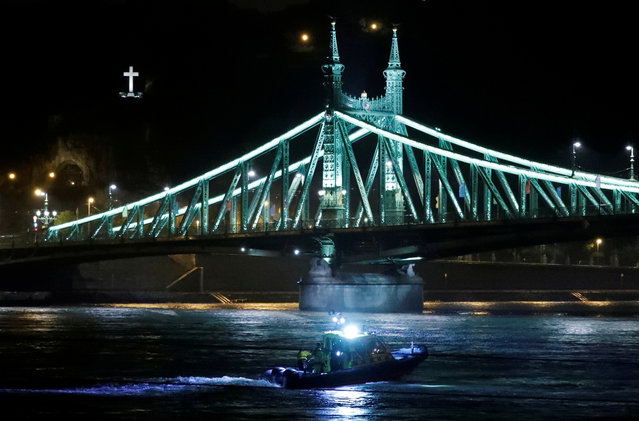 A rescue boat is seen on the Danube river after a tourist boat capsized in Budapest, Hungary, May 29, 2019. (Photo by Bernadett Szabo/Reuters) 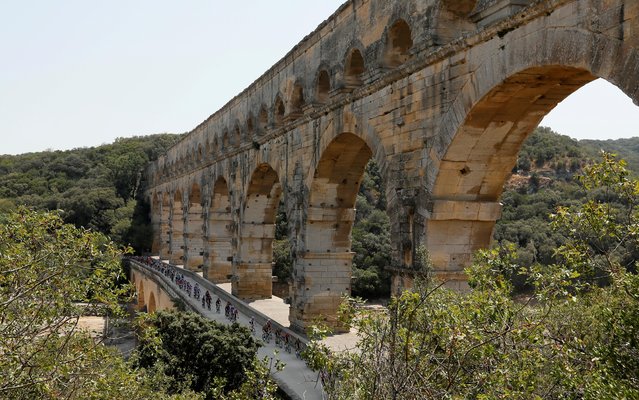 The pack rides next to the Pont du Gard during the sixteenth stage of the Tour de France cycling race over 117 kilometers (73 miles) with start and finish in Nimes, France, Tuesday, July 23, 2019. (Photo by Gonzalo Fuentes/Reuters) 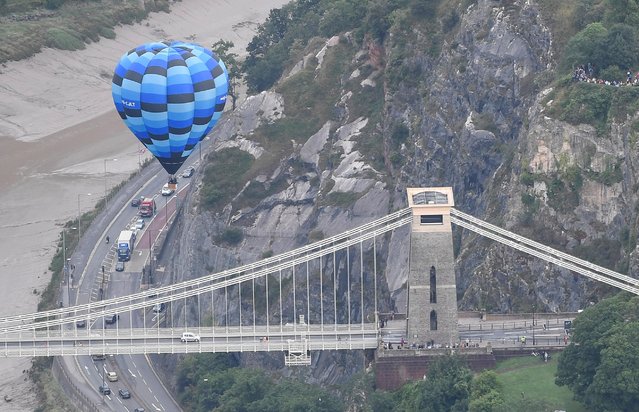 A balloon flies near the Clifton Suspension Bridge during a mass take off at the annual Bristol hot air balloon festival in Bristol, Britain, August 8, 2019. (Photo by Toby Melville/Reuters) 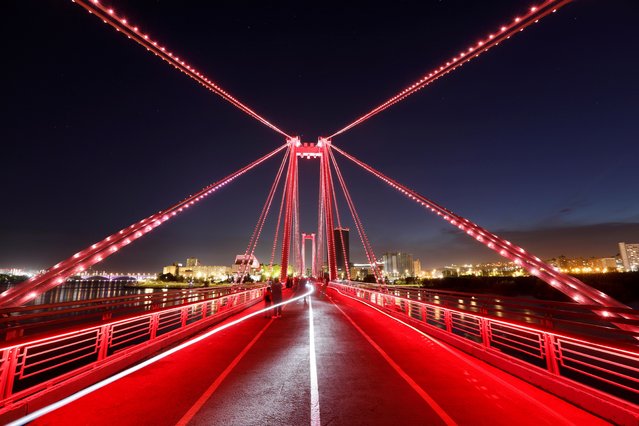 People walk along the Vinogradovsky pedestrian bridge across the Yenisei River illuminated on the occasion of the National Flag Day in central Krasnoyarsk, Russia on August 22, 2019. (Photo by Ilya Naymushin/Reuters) 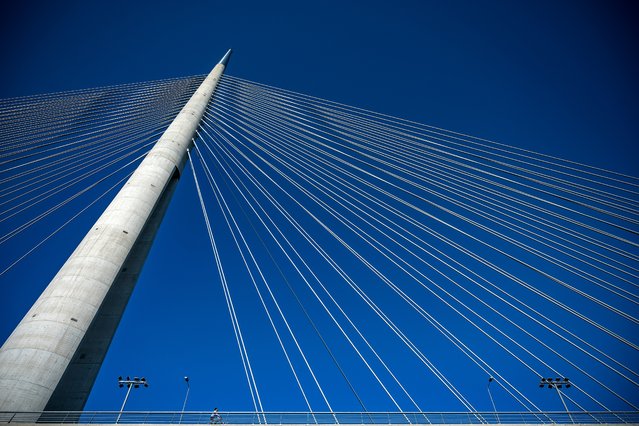 A man rides a bicycle over the Ada bridge in Belgrade on June 6, 2019. Ada Bridge is a newly dominating landmark on Belgrade skyline. Built in 2012, the bridge connects the municipalities of Cukarica and New Belgrade. (Photo by Andrej Isakovic/AFP Photo) 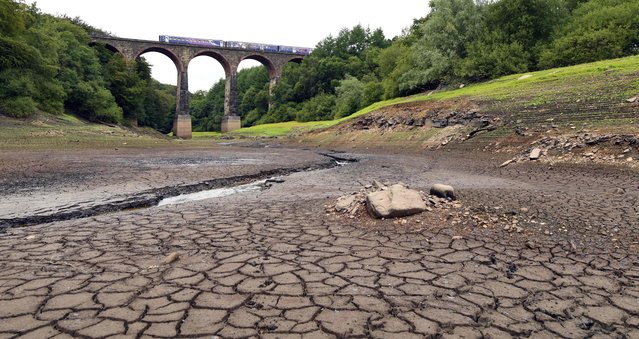 A picture shows a parched section of the Wayoh Reservoir spanned by the Armsgrove Viaduct at Edgworth near Bolton, northwest England, on August 1, 2018 as dry and hot conditions were set to continue in much of Britain. Britain has experienced its driest first half to a summer on record, with temperatures topping 30 degrees Celsius for several days, according to the Met Office. Wayoh reservoir supplies drinking water to the northwest Town of Bolton in Greater Manchester. (Photo by Paul Ellis/AFP Photo) 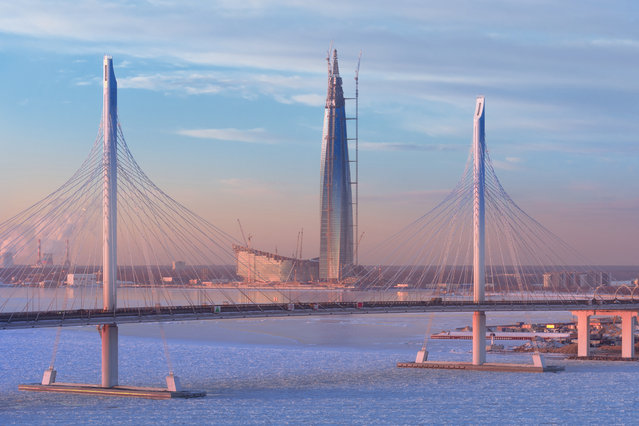 A view of the Lakhta Center multifunctional complex under construction in St Petersburg' s Primorsky District and a cable stayed bridge of the Western High- Speed Diameter toll motorway in St Petersburg, Russia on March 5, 2018. (Photo by EPA/EFE/Rex Features/Shutterstock) 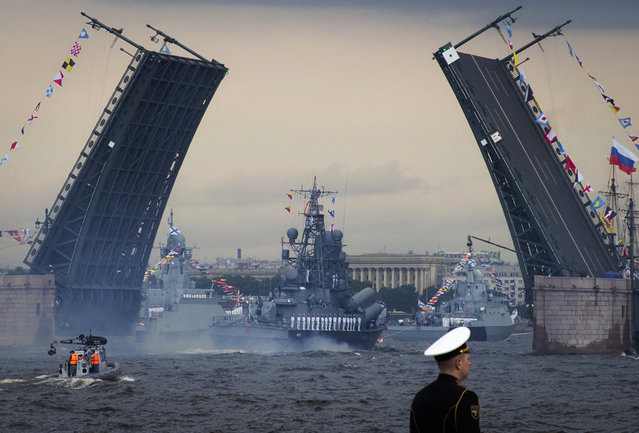