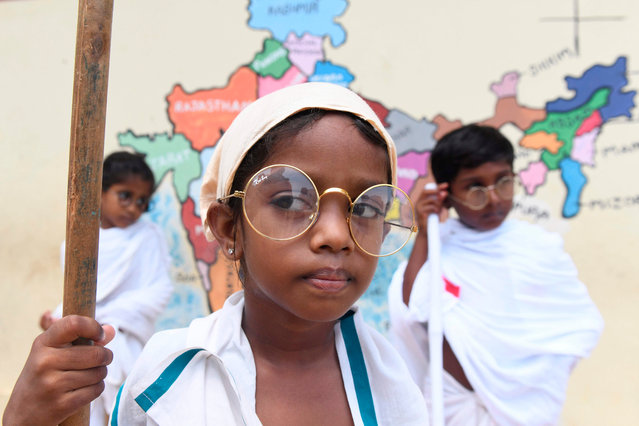 A student dressed like Indian independence icon Mahatma Gandhi, looks on during an event at a school in Chennai on October 2, 2019, to mark Gandhi's 150th birth anniversary. (Photo by Arun Sankar/AFP Photo) 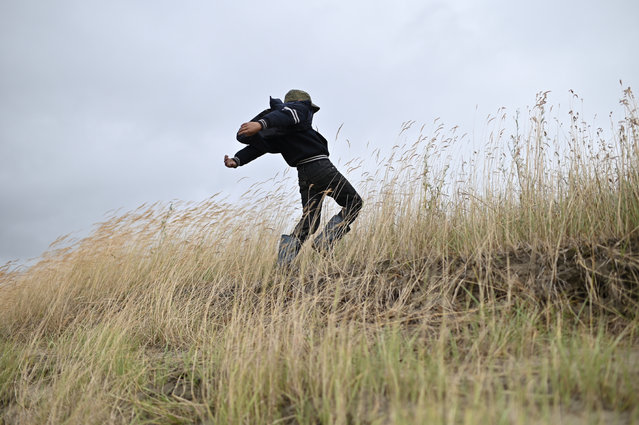 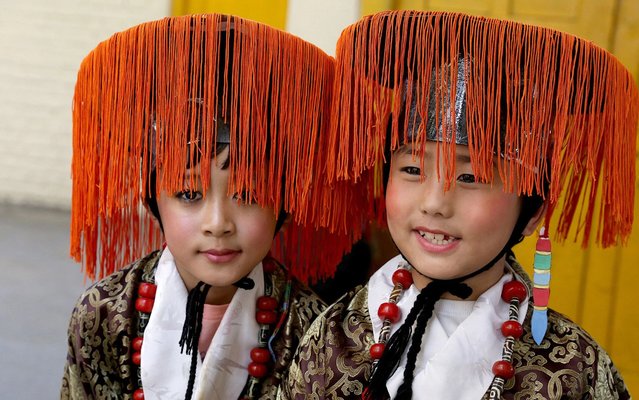 Tibetan boys living-in-exile in India wearing tradtional clothes wait to participate in a cultural program to celebrate the 59th anniversary of Tibetan Democracy Day at the main Tibetan Tsuglagkhang temple in McLeod Ganj, near Dharamsala, India, 02 September 2019. On 02 September 1960, the first members of the Tibetan Parliament-in-exile in India formally took their oath of office, establishing the democratic system of Tibet. (Photo by Sanjay Baid/EPA/EFE/Rex Features/Shutterstock) 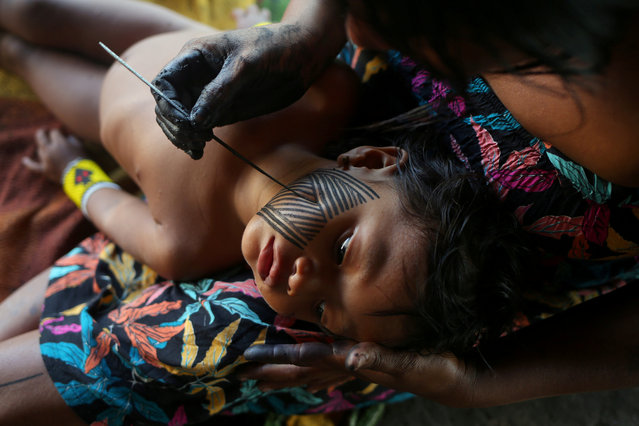 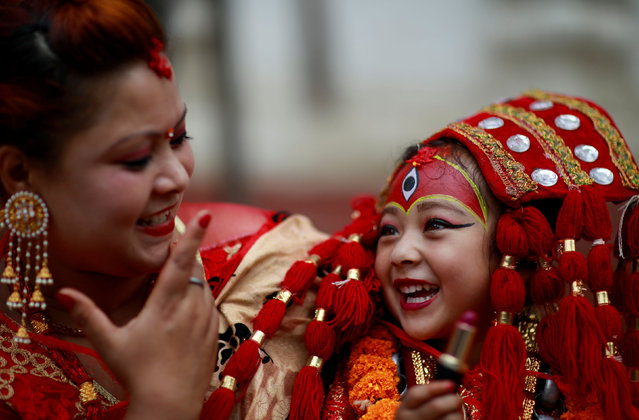 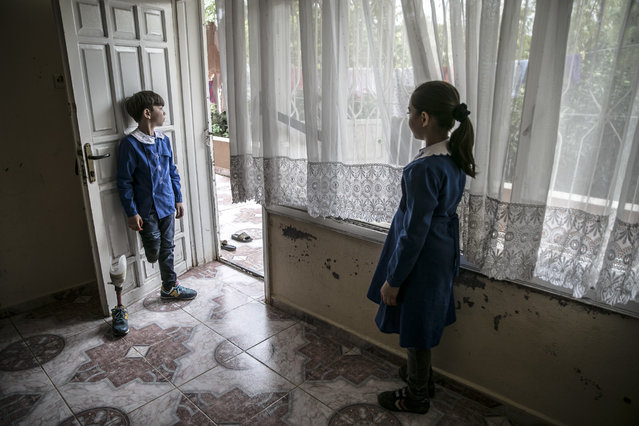 Luceyn Kifretune (R), 9 years-old Syrian girl whose face burnt and lost four of her family members after a barrel bomb attack of Assad Regime hit their house in Syria's Saraqib district, stares at her brother Omer (L), who lost his right leg in the same attack, at their house in Reyhanli district in uniforms of Yenisehir Elementary School, where they continue their education, in Reyhanli district of Turkey's Hatay province on October 17, 2019. Luceyn's face's right part burnt as she lost her father, mother, aunt and brother in the same attack. She received a successful surgery in Istanbul with the help of charities, after she and her family sheltered in Reyhanli. (Photo by Cem Genco/Anadolu Agency via Getty Images) 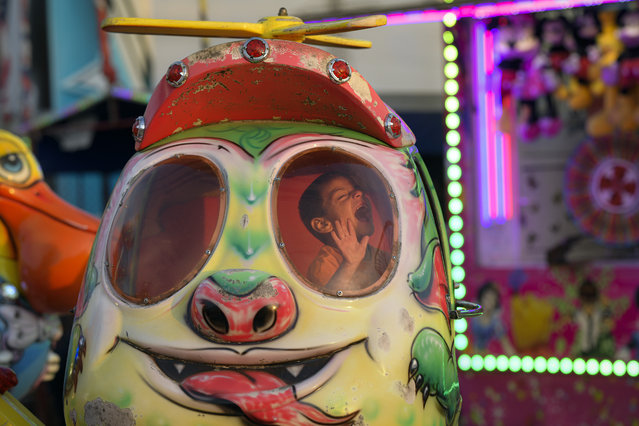 In this picture taken Thursday, September 12, 2019, a child laughs while on a ride at an autumn fair in Titu, southern Romania. Romania's autumn fairs are a loud and colorful reminder that summer has come to an end and, for many families in poorer areas of the country, one of the few affordable public entertainment events of the year. (Photo by Andreea Alexandru/AP Photo) 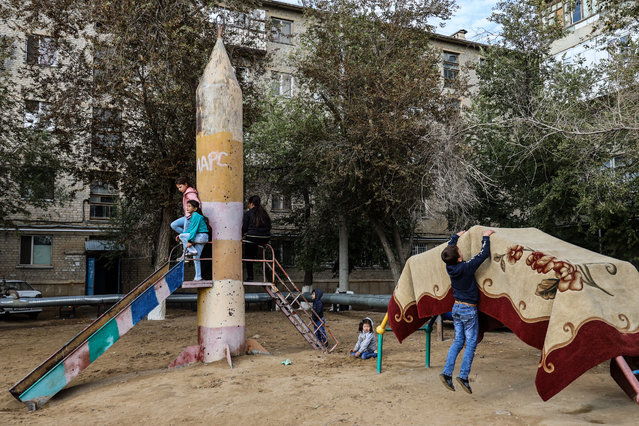 Children on a playground in the city of Baikonur, located in central Kazakhstan on September 21, 2019. The city is rented and administered by the Russian Federation and services the Baikonur Cosmodrome. (Photo by Sergei Savostyanov/TASS) 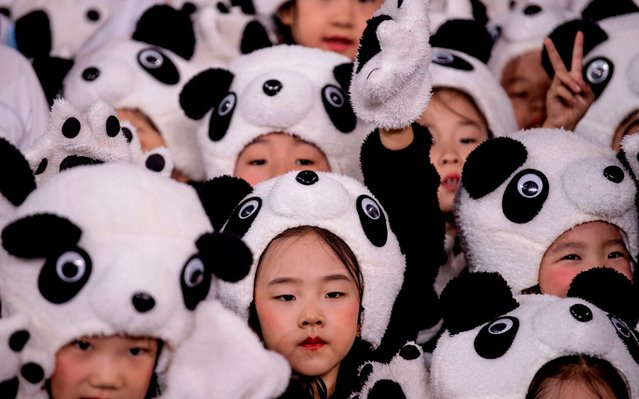 Children wearing a panda costume group together during the official reveal of the mascots for the Beijing 2022 Winter Olympic and Paralympic Games at Shougang Ice Hockey Arena, Shougang Park, Shijingshan District, Beijing in September 17, 2019. (Photo by Noel Celis/AFP Photo) 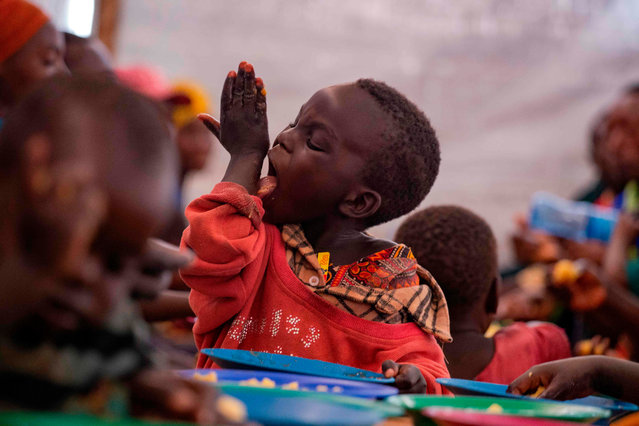 Young Burundian refugee, Kevin licks his hand as he enjoys a meal on October 3, 2019 at the Nyabitara Transit site in Ruyigi, Burundi. Nearly 600 Burundians who fled political violence in their home country to Tanzania were on Thursday repatriated voluntarily, the UN refugee agency and witnesses said. The move came after the Tanzanian government vowed that from October 1 it would start repatriating all Burundians, willing or not – a stance that some officials appeared to be trying to roll back. (Photo by Tchandrou Nitanga/AFP Photo) 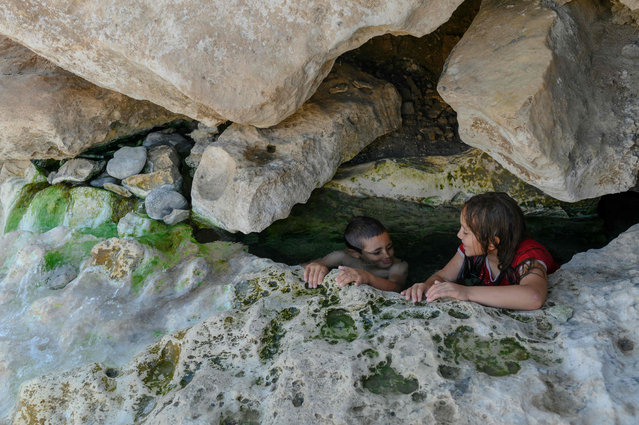 Muhammed (L) and Hasret (R) enjoy a hot spring water in the Botan valley a few kilometers from the Ilisu dam, next to the city of Siirt on August 18, 2019. (Photo by Bülent Kılıç/AFP Photo) 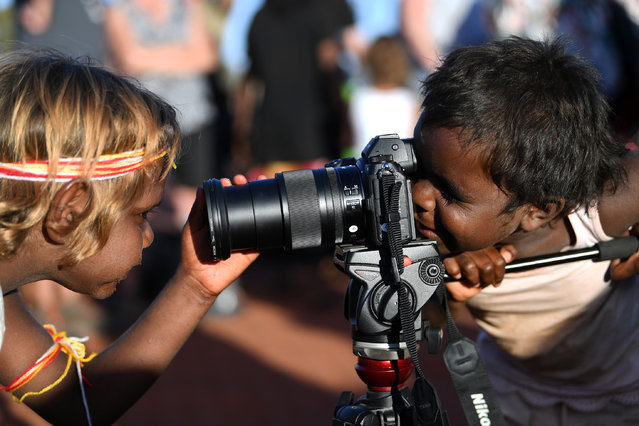 Indigenous Anangu children play with a camera during a ceremony marking the permanent ban on climbing Uluru, also known as Ayers Rock, at Uluru-Kata Tjuta National Park in Australia's Northern Territory on October 27, 2019. Indigenous Australians performed songs and traditional dance as the sun set over Uluru on October 27, capping a weekend of celebrations to mark the historic ban on climbing the sacred site. (Photo by Saeed Khan/AFP Photo) 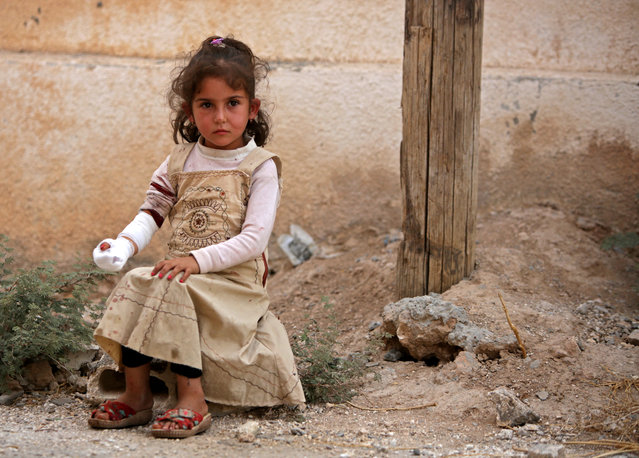 A Syrian girl sits on the side of a road after receiving treatment on October 20, 2019, in the Syrian border town of Tal Abyad which was seized by Turkey-backed forces last week. (Photo by Bakr Alkasem/AFP Photo) 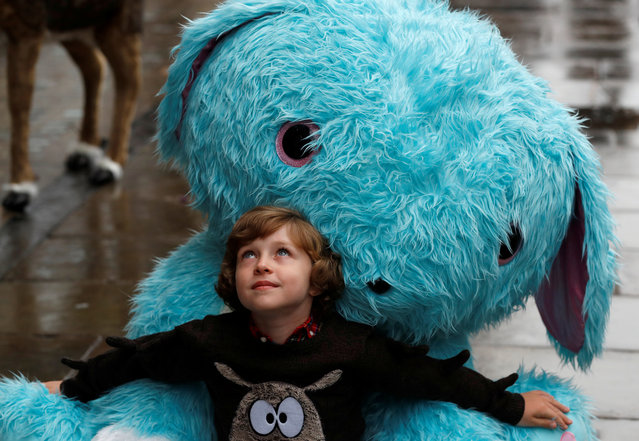 Winston Bartlett, 9, poses for a photograph with a giant Scruff-a-luvs toy at Hamleys store, ahead of announcing their top-ten Christmas toys, in London, Britain, September 26, 2019. (Photo by Peter Nicholls/Reuters) 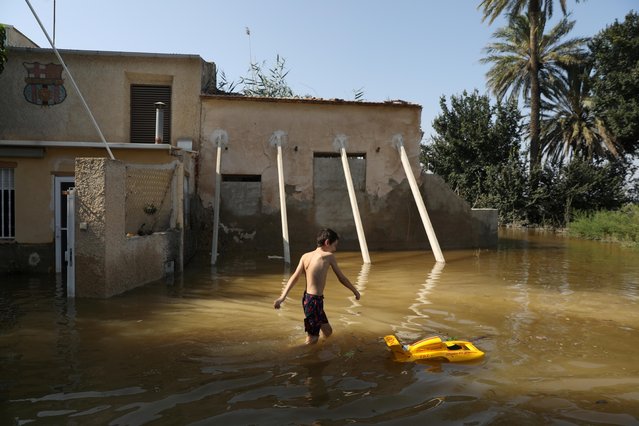 The youngest child in the Canizares family plays in the flooded vegetable garden of their summer home after torrential rains in Dolores near Alicante, Spain, September 16, 2019. (Photo by Susana Vera/Reuters) 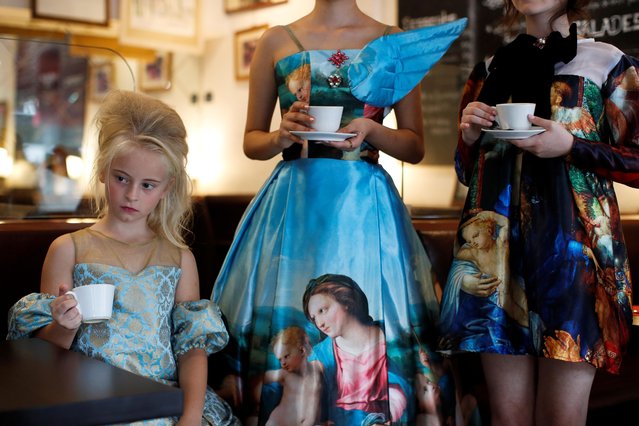 Model Daisy-May Demetre, 9 year-old double amputee who will walk the runway during Paris Fashion Week, is seen during a photo shoot a day before the show of luxury children's wear label Lulu et Gigi in Paris, France, September, 26, 2019. (Photo by Gonzalo Fuentes/Reuters) 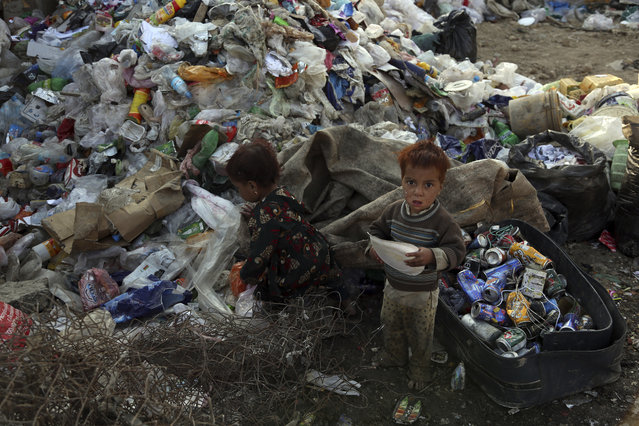 An Afghan brother and sister play at a recycling center in Kabul, Afghanistan, Tuesday, October 8, 2019. (Photo by Rahmat Gul/AP Photo) 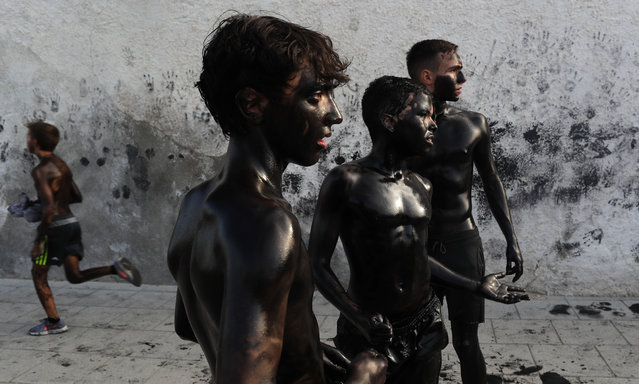 In this photo taken on Friday, September 6, 2019, boys painted with black grease celebrate during the traditional festivities of the Cascamorras festival in Baza, Spain. During the Cascamorras Festival, and according to an ancient tradition, participants throw black paint over each other for several hours every September 6 in the small town of Baza, in the southern province of Granada. The “Cascamorras” represents a thief who attempted to steal a religious image from a local church. People try to stop him, chasing him and throwing black paint as they run through the streets. (Photo by Manu Fernandez/AP Photo) 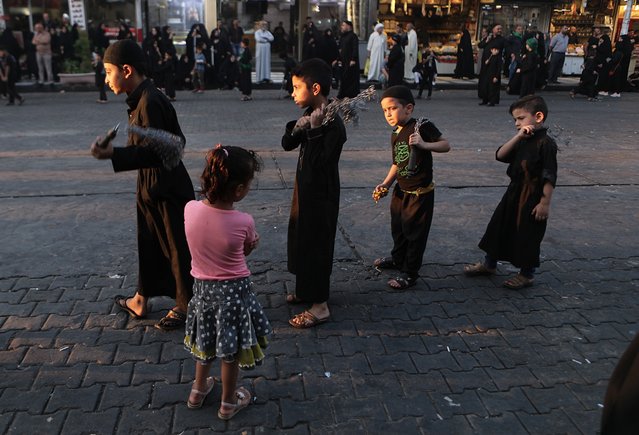 A girl watches Shiite children beat themselves with chains during a Muharram procession in Baghdad, Iraq, Monday, September 9, 2019. Muharram, the first month of the Islamic calendar, is a month of mourning for Shiites in remembrance of the death of Hussein, the grandson of the Prophet Muhammad, at the Battle of Karbala in present-day Iraq in the 7th century. (Photo by Khalid Mohammed/AP Photo)
Edit Del
29 Oct 2019 00:05:00, post received 0 comments
Publication archive:
←   →
Popular tags:
All tags
Last searches: