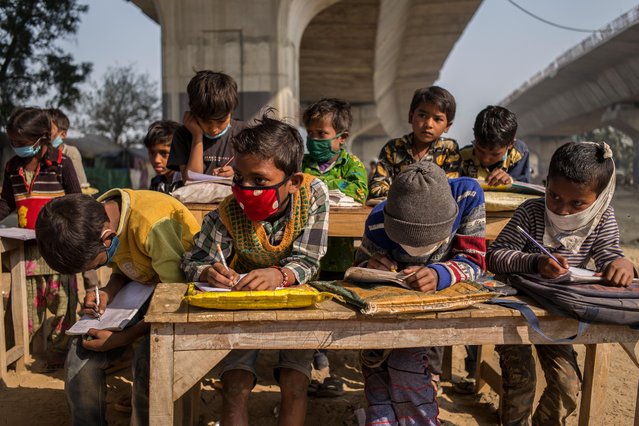 Underprivileged children sit at desks underneath a flyover at an improvised classroom set up at a construction site on December 09, 2020 in New Delhi, India. Many underprivileged children are unable to afford the laptops or tablet computers needed for online classes, leaving them without access to education as the Covid-19 pandemic rages across India. The improvised school, set up by graduate students who are still looking for work, is located at a construction site underneath a metro railway track in the dusty streets of the country's capital. The pandemic is hit the underprivileged members of society the hardest, forcing millions of people out of work, out of homes, and back into destitution, as the country quickly approaches a tally of 10 million infections. (Photo by Anindito Mukherjee/Getty Images) 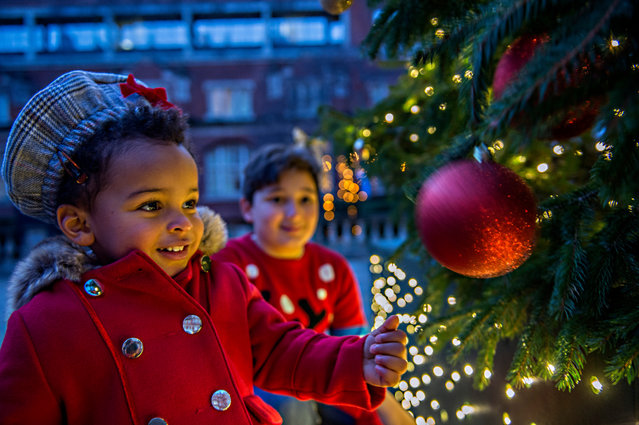 Children explore a Christmas tree outside the Royal Albert Hall in London, United Kingdom on December 9, 2020, as the building opened its doors for the first time in nearly nine months. (Photo by Annabel Moeller/The Guardian) 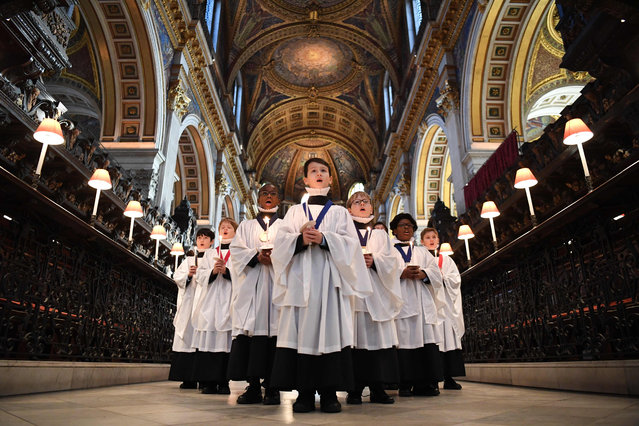 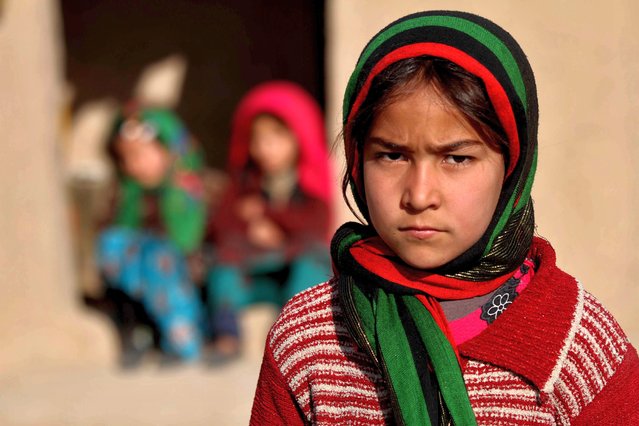 Afghans who were displaced from volatile areas, pose for a photograph outside their temporary shelters, on the eve of 'International Migrants Day' in Herat, Afghanistan, 17 December 2020. The world Observes “International Migrants Day” on 18 December 2020, to highlight the contributions made by the roughly 272 million migrants, including more than 41 million internally displaced persons, (IDPs), and the challenges they face. (Photo by Jalil Rezayee/EPA/EFE) 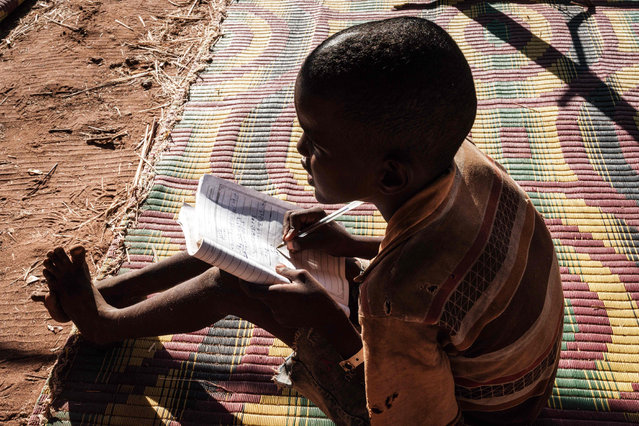 An Ethiopian refugee grade four pupil who fled the Tigray conflict attends a class at a makeshift classroom set by the Norwegian Refugee Council (NRC) at Um Raquba refugee camp in Gedaref, eastern Sudan, on December 7, 2020. The Norwegian Refugee Council (NRC) has registered 722 students from grades one through ten at Um Raquba refugee camp. According to the UN refugee agency, 45 percent of the refugees are children. (Photo by Yasuyoshi Chiba/AFP Photo) 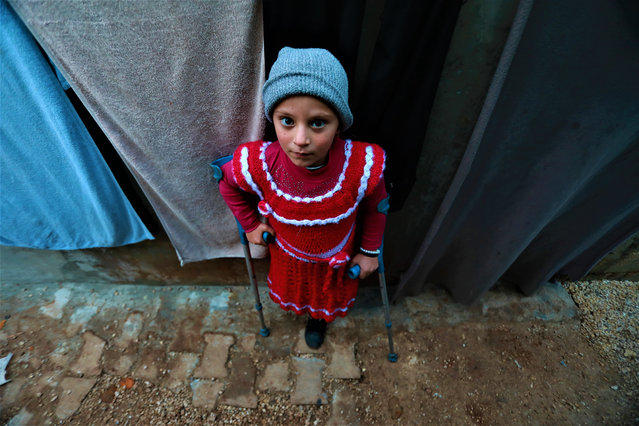 Six-year-old Esra Salih, who fled Deash attacks and took refuge in Idlib and lost her left leg in an attack of Assad Regime within the Syrian Civil War, poses for a photo with her crutches in Idlib, Syria on December 20, 2020. Esra Salih waits for the day to reach a prosthesis leg. (Photo by Bekir Kasim/Anadolu Agency via Getty Images) 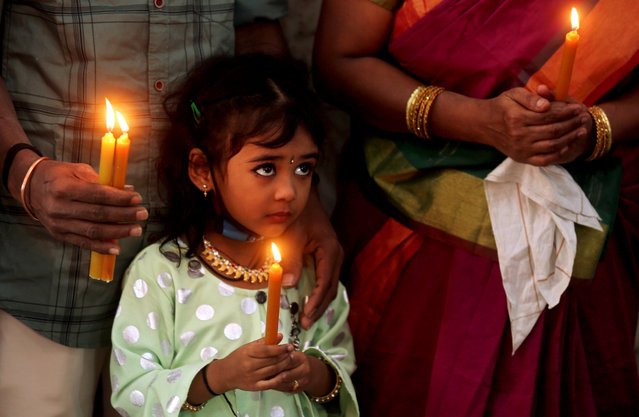 Indian Christians take part in Christmas prayers at the Infant Jesus church in Bangalore, India, 25 December 2020. Most Christians celebrate Christmas on 25 December to commemorate the birth of Jesus, the central figure of Christianity. (Photo by Jagadeesh N.V./EPA/EFE) 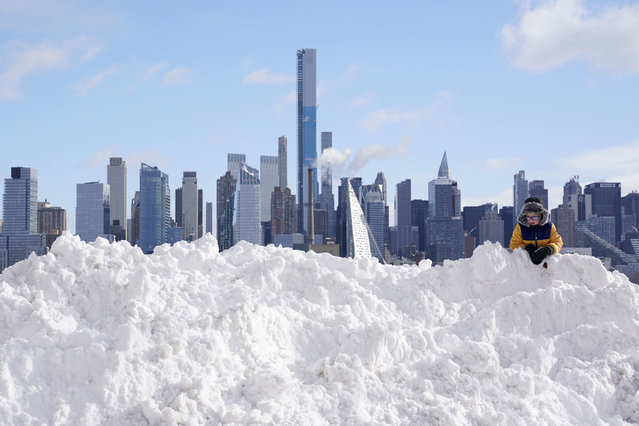 A boy plays on a mound of snow in front of the skyline of New York City in West New York, N.J., Thursday, December 17, 2020. The first major snowstorm of the season left the Northeast blanketed in snow, setting records in some areas. (Photo by Seth Wenig/AP Photo) Two girls sit inside a flooded tent at the flooded “Mukhayyam al-Khair” camp near the village of Kafr Uruq in the north of Idlib province on December 17, 2020, housing Syrians displaced from Saraqib and Maaret al-Numan, and following heavy rain in the previous days. (Photo by Omar Haj Kadour/AFP Photo) 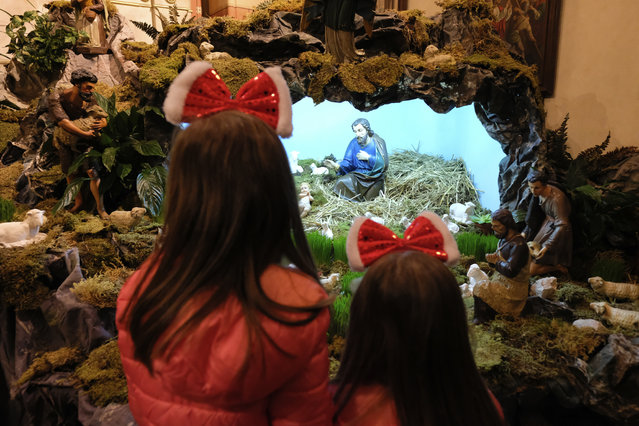 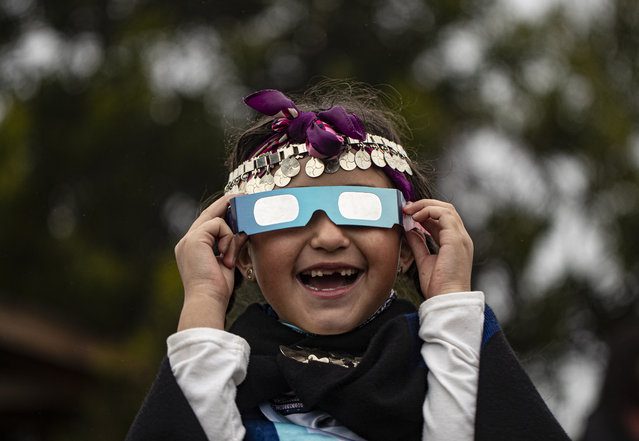 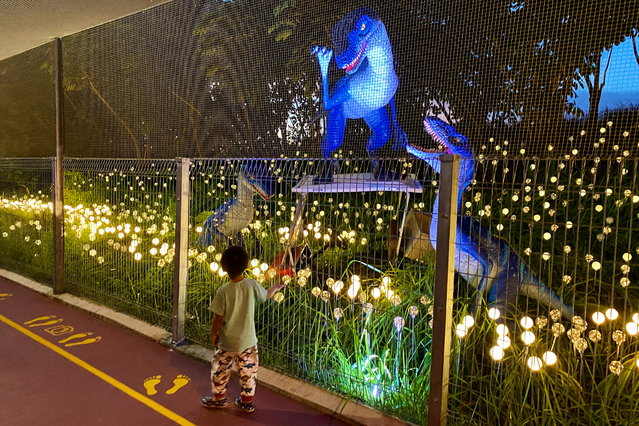 A child walks near dinosaurs exhibit along the Changi Jurassic Mile as it is light up for Christmas near Changi airport in Singapore on December 8, 2020. (Photo by Tim Chong/Reuters) 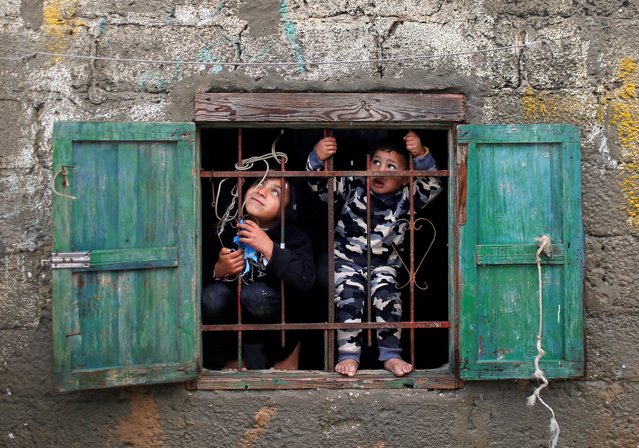 Palestinian children look out of their family's home window on a rainy day at Deir al-Balah refugee camp in the central Gaza Strip on December 17, 2020. (Photo by Mohammed Salem/Reuters) 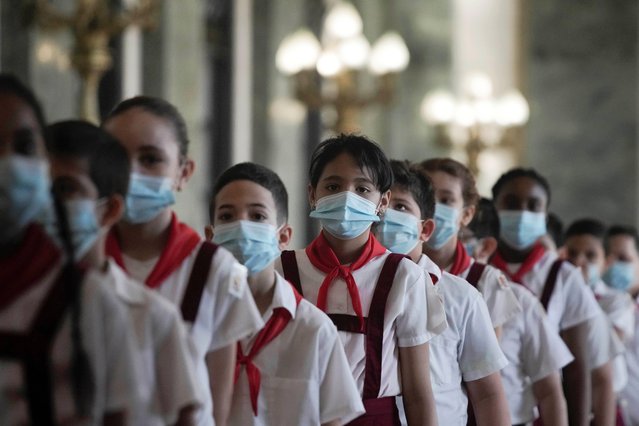 Children line up to pay tribute to late Eusebio Leal, the official historian of Havana, at the Capitol in Havana, Cuba, December 17, 2020. (Photo by Alexandre Meneghini/Reuters) 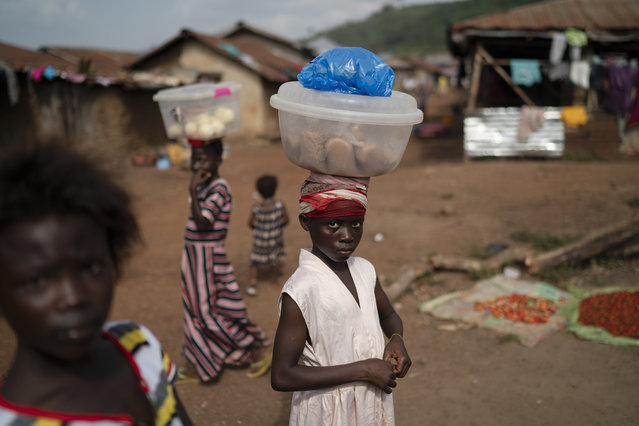 Isatu, 12, carries packets of rice flour to sell at Komao village, on the outskirts of Koidu, district of Kono, Sierra Leone, Sunday, November 22, 2020. Sierra Leone closed its borders before the country had its first COVID-19 case. As a result, the country has seen only 2,434 confirmed cases and 74 deaths. Only 76 of those cases were confirmed in Kono district, but the economic toll here has brought many families already living on the edge to a breaking point. (Photo by Leo Correa/AP Photo) 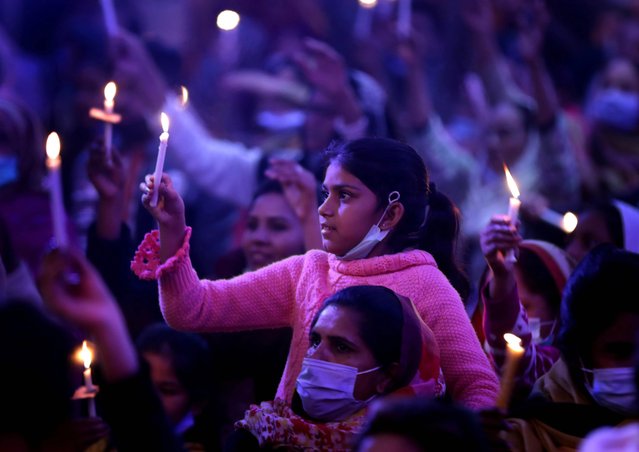 Pakistani Christians pray at a church, ahead of Christmas, in Lahore, Pakistan, 23 December 2020. Pakistan is a Sunni Muslim-majority country, with four million Christians out of a total population of around 200 million residents. (Photo by Rahat Dar/EPA/EFE) 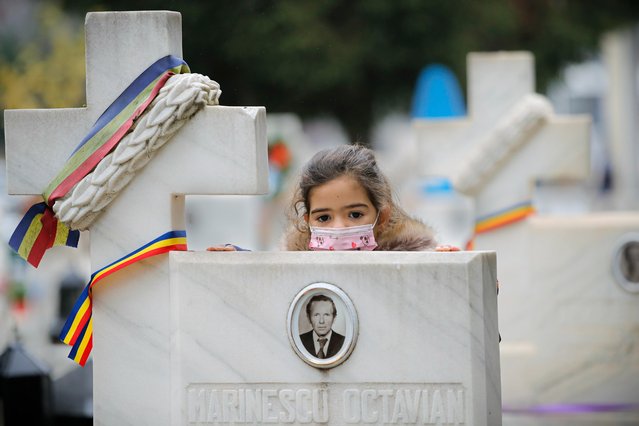 A child, wearing a mask for protection against the COVID-19 infection, leans on the cross of a 1989 anti-communist revolution victim after a memorial religious service for those killed in the uprising, in Bucharest, Romania, Monday, December 21, 2020. Participants and relatives of those killed marked the anniversary of the anti-communist uprising which started in Bucharest on Dec. 21, 1989, left more than one thousand people dead and ended the rule of dictator Nicolae Ceausescu. (Photo by Vadim Ghirda/AP Photo) 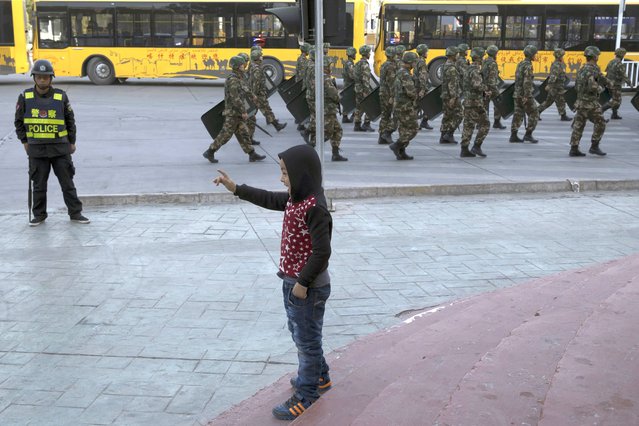 In this November 5, 2017, file photo, a child reacts as security personnel march by in a show of force in Kashgar in western China's Xinjiang region. A Chinese Communist Party official signaled Monday, Dec. 21, 2020 that there would likely be no let-up in its crackdown in the Xinjiang region, but said the government's focus is shifting more to addressing the roots of extremism. (Photo by Ng Han Guan/AP Photo/File) 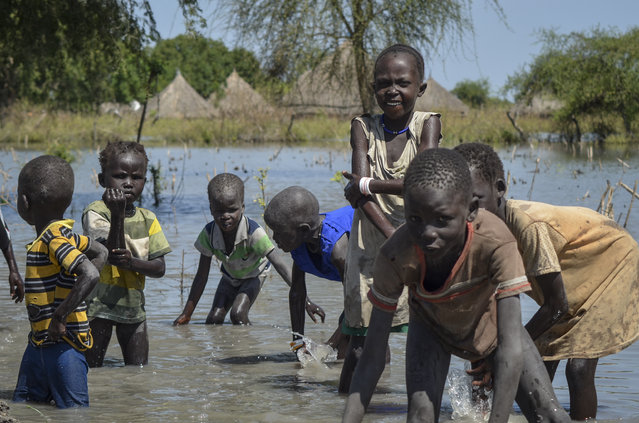 Children wash themselves in muddy floodwaters in the village of Wang Chot, Old Fangak county, Jonglei state, South Sudan Thursday, November 26, 2020. One county in South Sudan is likely in famine and tens of thousands of people in five other counties are on the brink of starvation, according to a new report released Friday, Dec. 11, 2020 by international food security experts. (Photo by Maura Ajak/AP Photo) 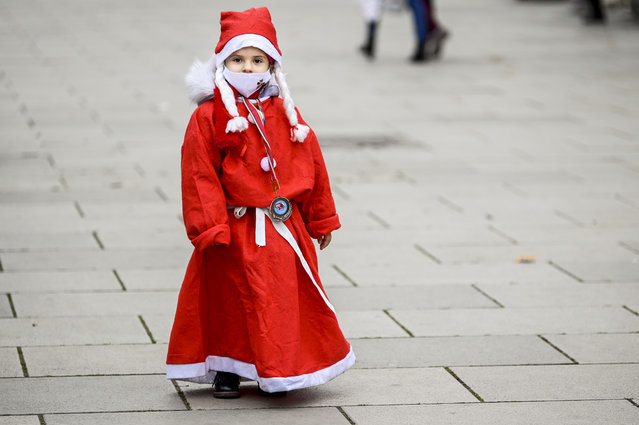