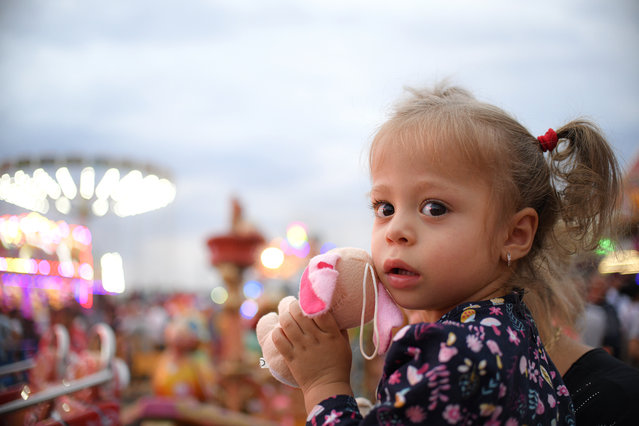 In this picture taken Saturday, September 14, 2019, a little girl holds a toy at an autumn fair in Titu, southern Romania. Romania's autumn fairs are a loud and colorful reminder that summer has come to an end and, for many families in poorer areas of the country, one of the few affordable public entertainment events of the year. (Photo by Andreea Alexandru/AP Photo) 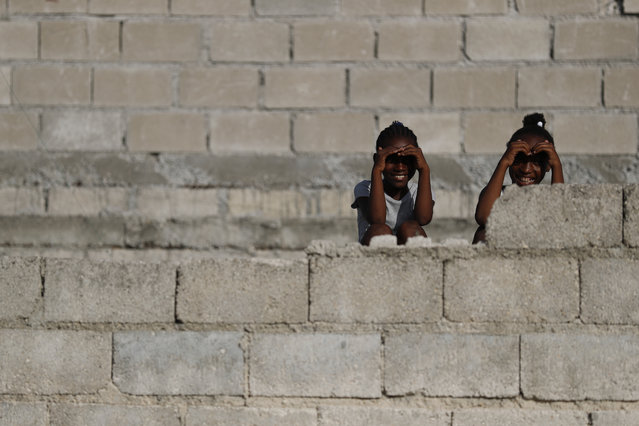 Girls peer over a wall from one rooftop to another inside the Delmas neighborhood of Port-au-Prince, Haiti, Tuesday, October 8, 2019. With schools still shuttered and parents worried about a climate of insecurity as protests calling for the resignation of the president enter their fourth week, few children are visible on the capital's streets. (Photo by Rebecca Blackwell/AP Photo) 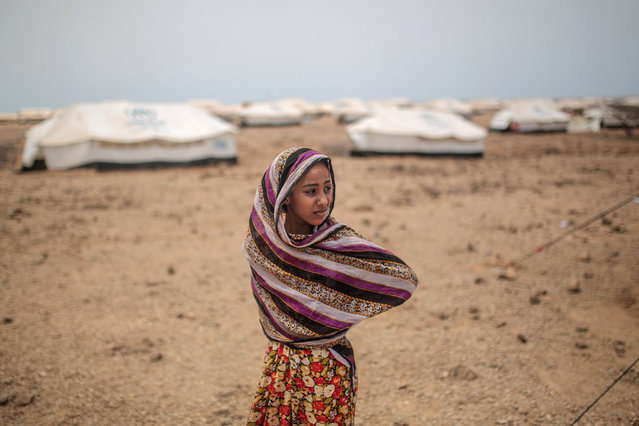 In this Tuesday, May 19, 2015 file photo, Ashwaq, 12, stands outside her family's tent, at the Markaze refugee camp in Obock, northern Djibouti. The Middle East has accounted for more than 50 per cent of the world's population internally displaced by conflict in 2015, with nearly 4.8 million new people forced to flee their homes. A major aid agency says 27.8 million people around the world were internally displaced by conflict and natural disasters last year, or as many as the combined populations of New York City, London, Paris and Cairo. (Photo by Mosa'ab Elshamy/AP Photo/File) 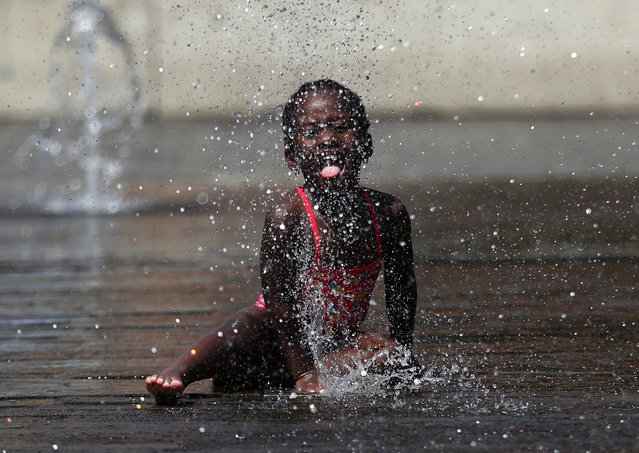 A girl plays with water in a fountain during a hot summer day in Brussels, Belgium, July 24, 2019. (Photo by Yves Herman/Reuters) 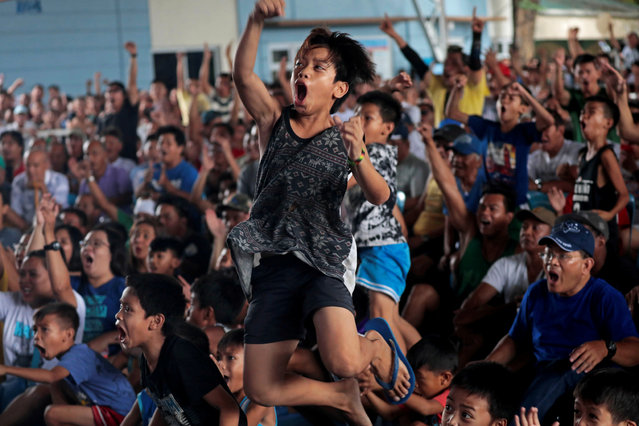 Filipino boxing fans react as they watch the WBA Welterweight match between Philippine boxing icon Manny Pacquiao and Keith Thurman of the U.S. in a live public viewing in Marikina, Philippines, July 21, 2019. (Photo by Eloisa Lopez/Reuters) 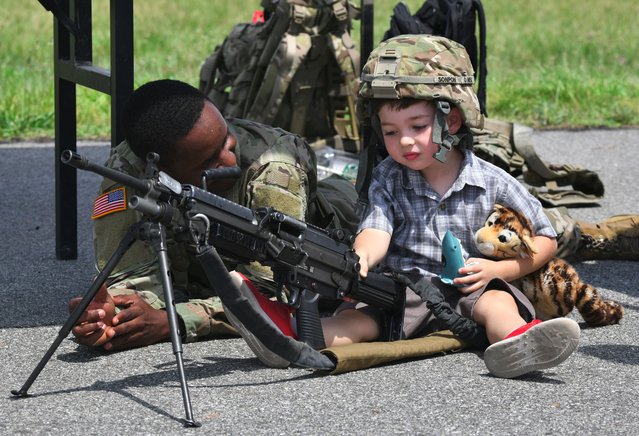 A US soldier looks at a boy posing with a M249 light machine gun during a ceremony to commemorate the 75th anniversary of the Eighth US Army at Camp Humphreys in Pyeongtaek on June 8, 2019. (Photo by Jung Yeon-je/AFP Photo) 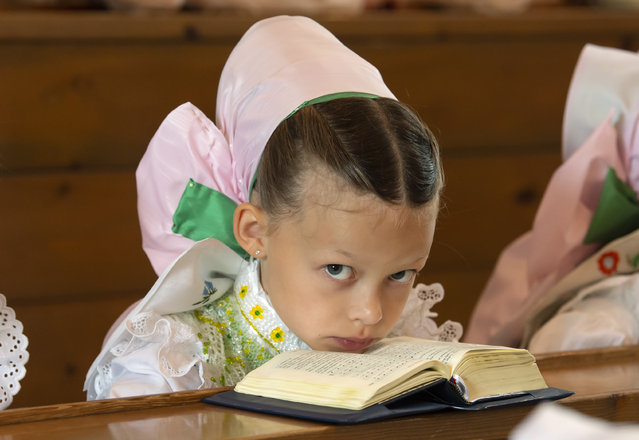 A child dressed in the traditional clothes of the Sorbs attend a holy mass during a Corpus Christi procession in Crostwitz, Germany, Thursday, June 20, 2019. The catholic faithful Sorbs are acknowledged as a national minority near the German-Polish border with their own language in eastern Germany. The procession to commemorate the solemnity of the body and blood of Christ has been a tradition in Lusatia (Lausitz) region. (Photo by Jens Meyer/AP Photo) 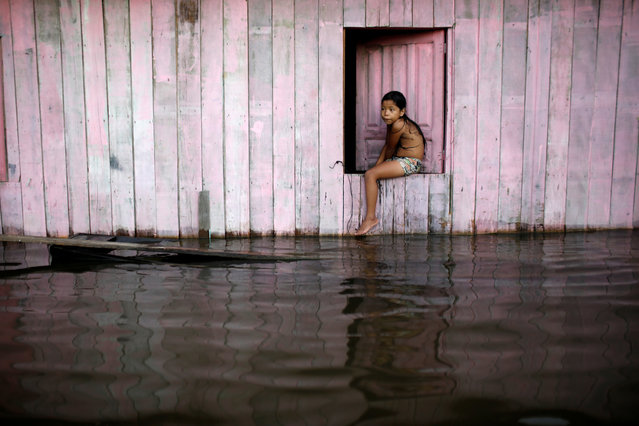 A child is seen on a street flooded by the rising Rio Solimoes, one of the two main branches of the Amazon River, in Anama, Amazonas state, Brazil on June 24, 2019. (Photo by Bruno Kelly/Reuters) 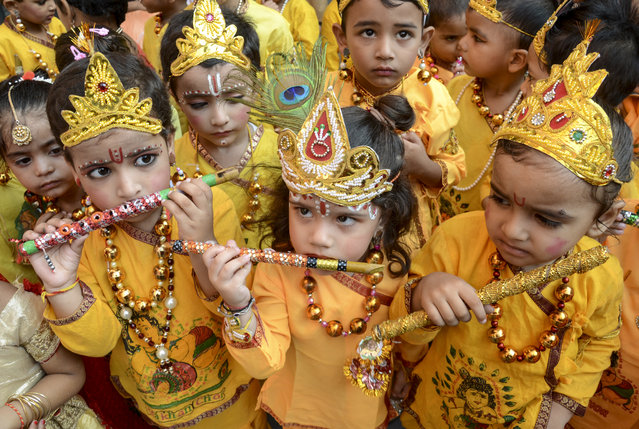 School children dressed up as Hindu deity Krishna perform during celebrations on the eve of the Janmashtami festival that marks Krishna's birthday, in Amritsar on August 23, 2019. (Photo by Narinder Nanu/AFP Photo) 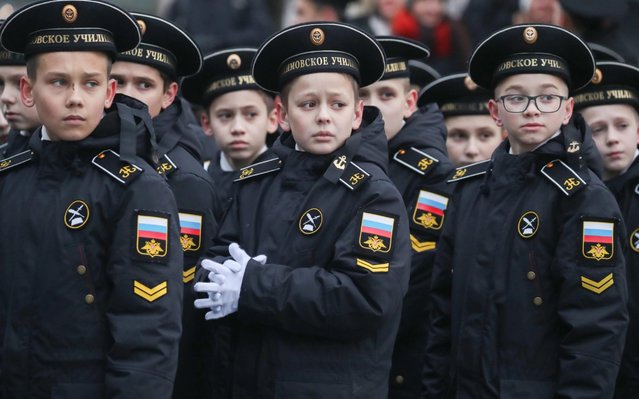 Students during a celebration of the 75th anniversary of the foundation of the Nakhimov Naval School in St Petersburg, Russia on October 5, 2019. (Photo by Peter Kovalev/TASS) 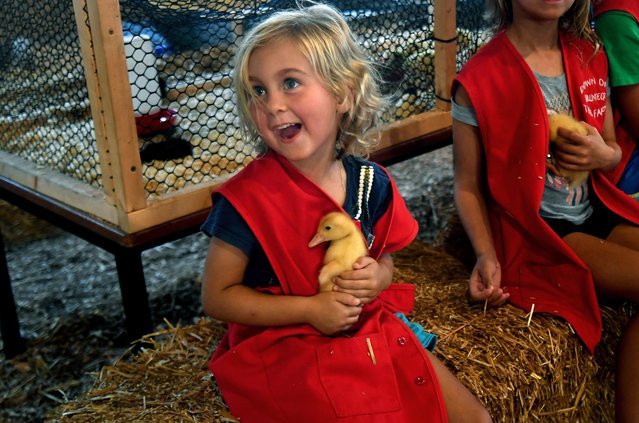 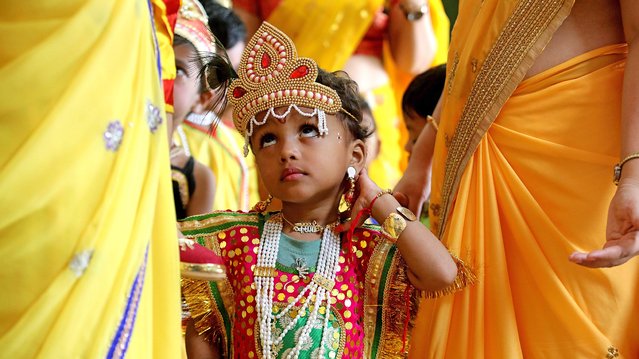 Public school children dressed as Lord Krishna and Goddess Radha celebrate the Janmashtmi festival, the birth anniversary of Lord Krishna, in Bhopal, India, 22 August 2019. Lord Krishna is a major Hindu deity and is the god of compassion, tenderness and love. (Photo by Sanjeev Gupta/EPA/EFE) 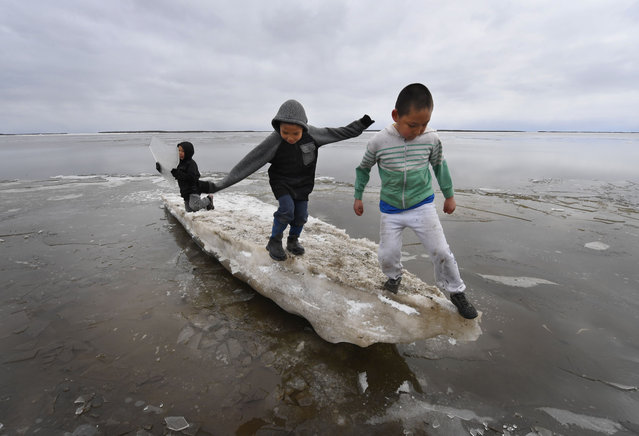 Schoolchildren play on melting ice at the climate change affected Yupik Eskimo village of Napakiak on the Yukon Delta in Alaska on April 18, 2019. (Photo by Mark Ralston/AFP Photo) 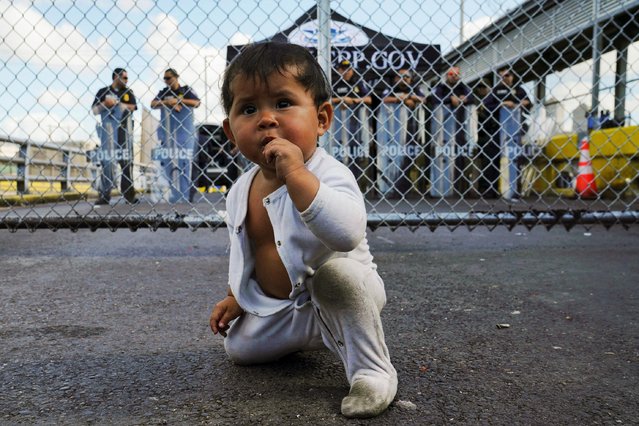 A Mexican one-year-old baby, who is awaiting her turn to seek asylum in the U.S. with her mother, is seen in front of the gates to the Gateway International Bridge in Matamoros, Mexico on October 10, 2019. (Photo by Veronica G. Cardenas/Reuters) 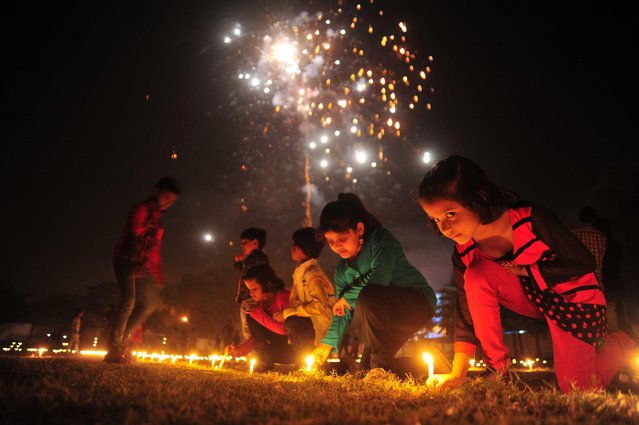 Young kids light candle during pujan at a stadium on the occasion of Dhanteras festival in Allahabad, India on October 28, 2016. Dhana Trayodashi is the first day of the Indian Diwali and Nepalese Tihar Festival. (Photo by Prabhat Kumar Verma/Pacific Press/LightRocket via Getty Images) 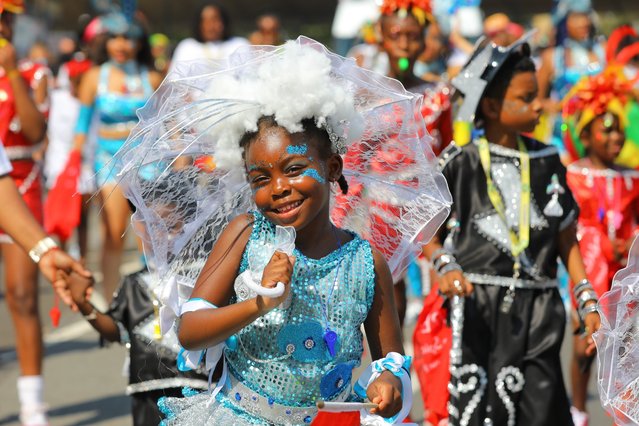 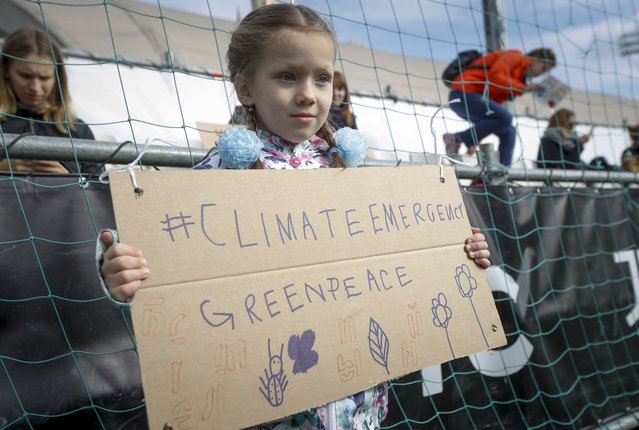 A girl holds a poster in front of the Russian government's building during a protest flash mob of Greenpeace for climate protection in Moscow, Russia, Friday, September 27, 2019. (Photo by Dmitri Lovetsky/AP Photo) 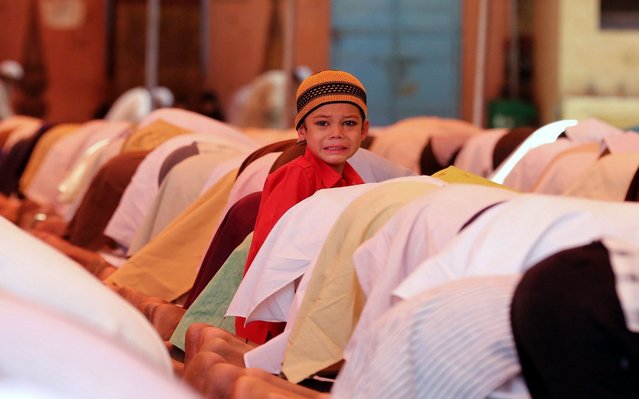 Indian Muslims offer prayer at Taj-ul-Masajid mosque during the last Friday of Ramadan in Bhopal, India, 31 May 2019. Muslims around the world celebrate the holy month of Ramadan by praying during the night time and abstaining from eating, drinking, and sexual acts during the period between sunrise and sunset. (Photo by Sanjeev Gupta/EPA/EFE/Rex Features/Shutterstock) 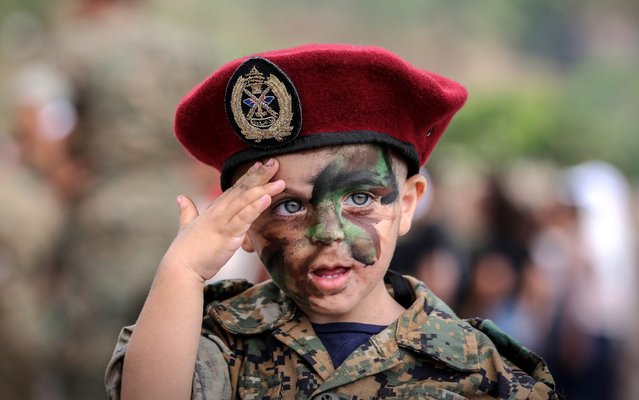 Lebanese citizens attend a festival for the Lebanese army under the name “A Day with the Homeland” at the Jounieh International Festivals in Jounieh, north of Beirut, 06 July 2019, where soldiers of the guerrilla forces carried out military maneuvers and shows as well as some military equipment. The audience participated with the army, where they dressed their children military uniforms and painted their faces with military colors. (Photo by Nabil Mounzer/EPA/EFE/Rex Features/Shutterstock) 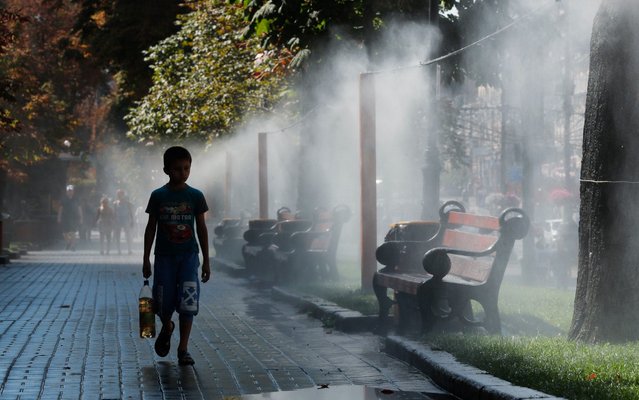 Ukrainians cool themselves during a hot day with drops of water which is sprayed from a pipe hanging over a sidewalk of the central street of Khreshchatyk in Kiev, Ukraine, 12 August 2019. (Photo by Sergey Dolzhenko/EPA/EFE) 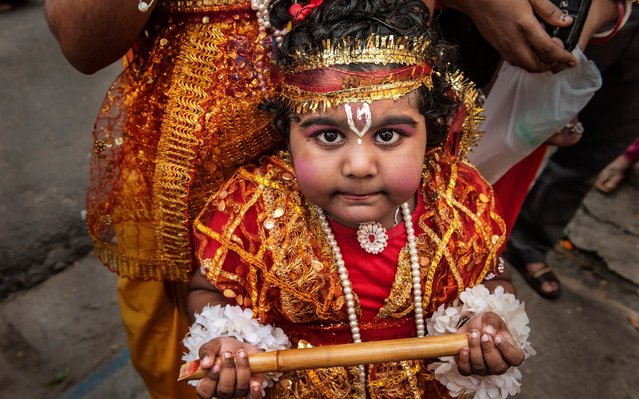