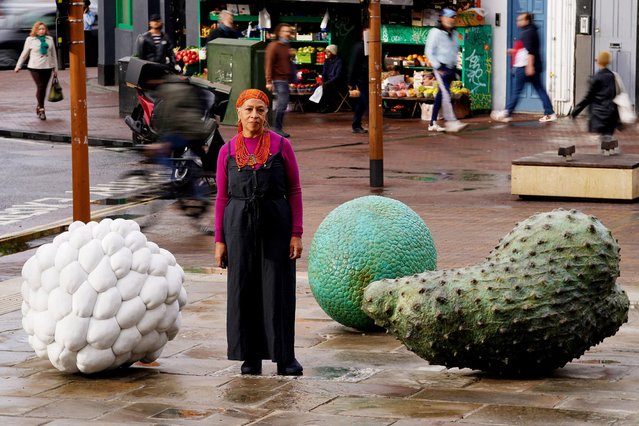 Veronica Ryan unveils the first permanent UK public artwork dedicated to the Windrush Generation at Narrow Way Square, London on October 1, 2021. The artwork, Custard Apple (Annonaceae), Breadfruit (Moraceae) and Soursop (Annonaceae), 2021, is the first permanent public sculpture in the UK to honour the legacy and contributions of the Windrush Generation. (Photo by Jonathan Brady/PA Images via Getty Images) 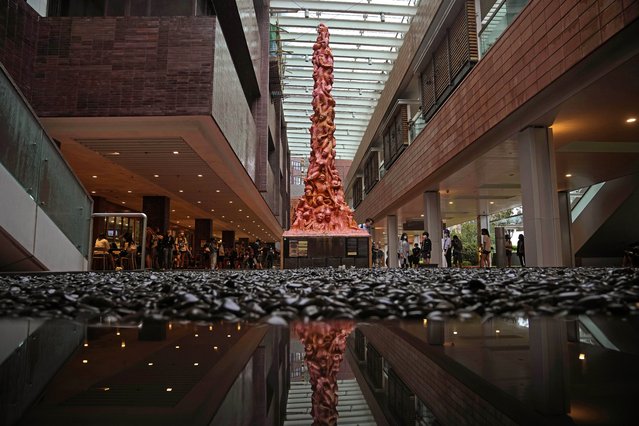 The “Pillar of Shame” statue, a memorial for those killed in the 1989 Tiananmen crackdown, is displayed at the University of Hong Kong, Wednesday, October 13, 2021. Danish artist Jens Galschioet is seeking to get back his sculpture in Hong Kong memorializing the victims of China's 1989 Tiananmen Square crackdown as a deadline loomed for its removal Wednesday, Oct. 13, 2021. (Photo by Kin Cheung/AP Photo) 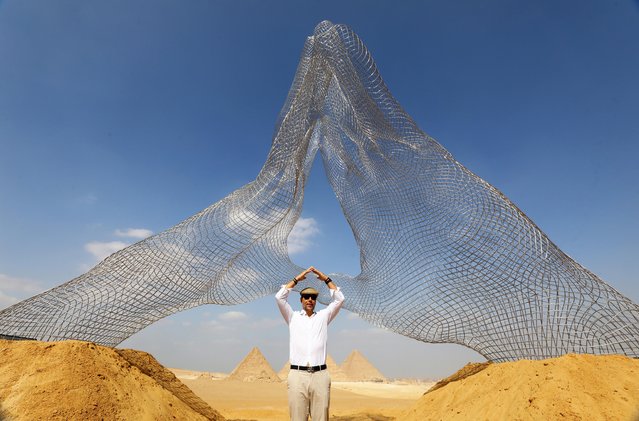 Italian sculptor Lorenzo Quinn, son of late actor Anthony Quinn, poses in front of his sculpture “Together” near the pyramids in Giza, Egypt, 21 October 2021. Art D’Egypte, organizers of the large-scale sculptures and installations invited ten international contemporary artists to take part in the exhibition “Forever is Now” at the Giza Pyramids and the surrounding Giza Plateau, running until 07 November. (Photo by Khaled Elfiqi/EPA/EFE) 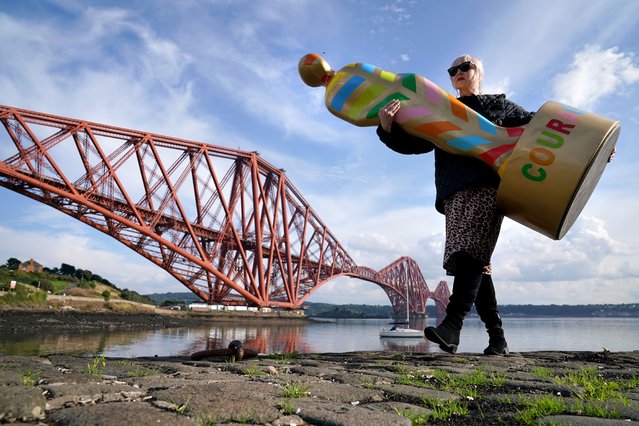 Fiona McGarva holds one of the sculptures from the art installation Gratitude at The Forth Bridge at North Queensferry on September 15, 2021, ahead of going on display just outside of Edinburgh at Newhailes House and Gardens from Friday 17th September. The public art installation pays tribute to NHS staff and all key workers for their ongoing courage and dedication during the Covid-19 pandemic. (Photo by Andrew Milligan/PA Images via Getty Images) 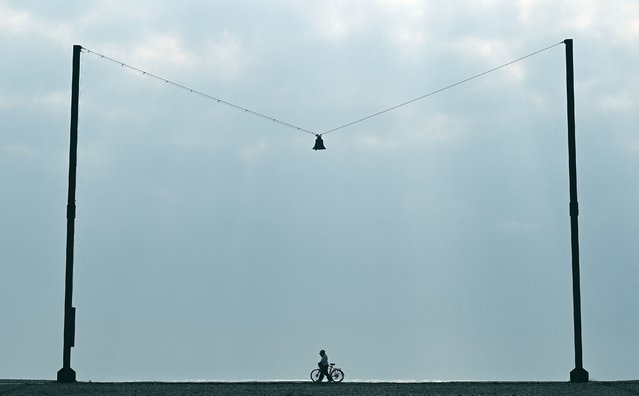 A man pushes a bicycle past an art installation entitled “Out of Tune” featuring a 16th-century tenor bell from Scraptoft Church in Leicestershire, by Norwegian artist A K Dolven, on the beachfront in Folkestone, south east England on October 19, 2021. (Photo by Glyn Kirk/AFP Photo) 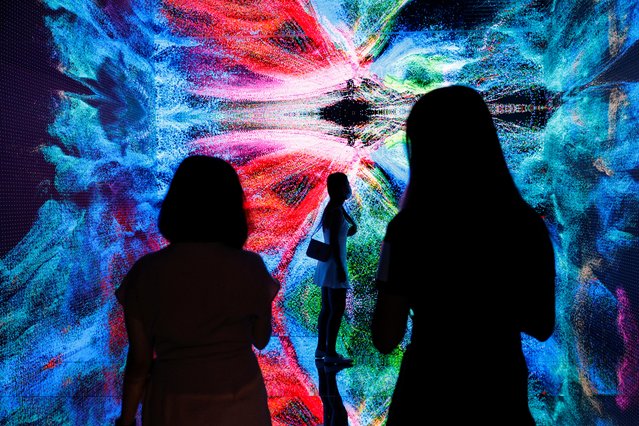 Visitors are pictured in front of an immersive art installation titled “Machine Hallucinations – Space: Metaverse” by media artist Refik Anadol, which will be converted into NFT and auctioned online at Sotheby's, at the Digital Art Fair, in Hong Kong, China on September 30, 2021. (Photo by Tyrone Siu/Reuters) 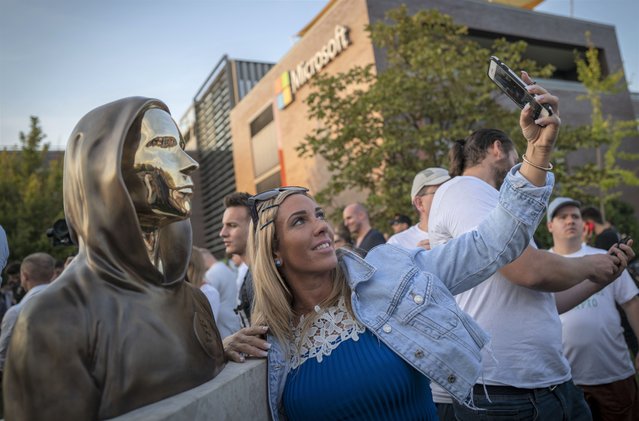 A woman takes a selfie with a newly unveiled statue of the mysterious developer of the Bitcoin digital currency in Budapest, Hungary, Thursday, September 16, 2021. A bronze statue was unveiled in Hungary’s capital on Thursday which its creators say is the first in the world to pay homage to the anonymous creator of the Bitcoin digital currency. Erected in a business park near the Danube River in Budapest, the bust sits atop a stone plinth engraved with the name of Satoshi Nakamoto, the pseudonym of the mysterious developer of Bitcoin whose true identity is unknown. (Photo by Bela Szandelszky/AP Photo) 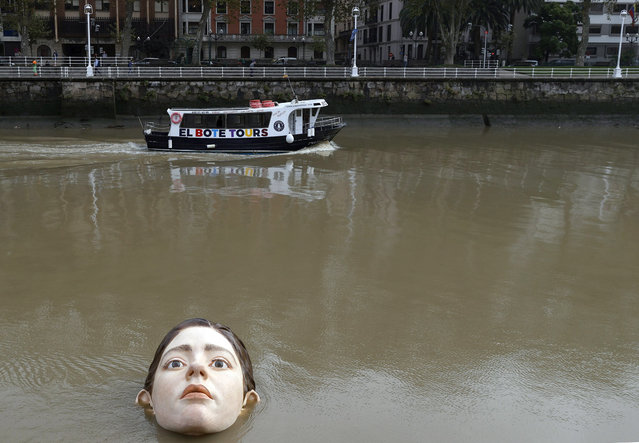 The sculpture “Bihar” (“Tomorrow” in Basque language) by Mexican artist Ruben Orozco is seen in a estuary in Bilbao, Basque Country, northern Spain, 22 September 2021. The sculpture, ordered by BBK Foundation, is a giant head measuring two meters and is part of a campaign for social reflexion. Depending on the tie, the sculpture is seen by onlookers or dissapears under the water. (Photo by Luis Tejido/EPA/EFE) 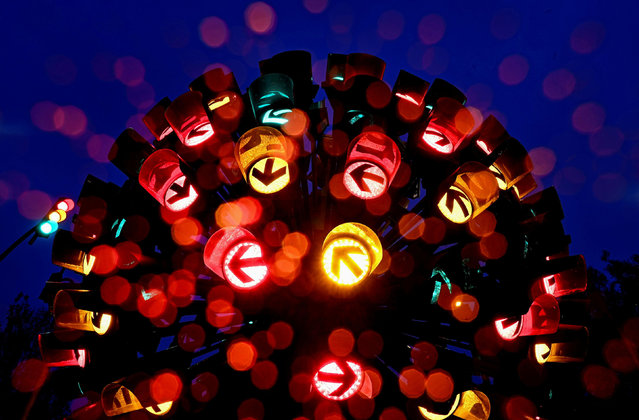 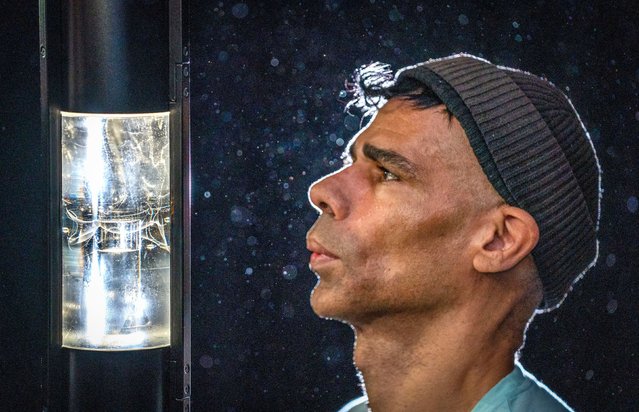 Royal College of Art artist and sculptor Wayne Binitie takes a closer look at his glass sculpture on September 29, 2020, containing air from the year 1765 which is on display at a new immersive exhibition “Polar Zero” created in collaboration with British Antarctic Survey and global engineering and design firm Arup, at the Glasgow Science Centre to coincide with the Cop26 summit which takes place in Glasgow next month. (Photo by Jane Barlow/PA Images via Getty Images) 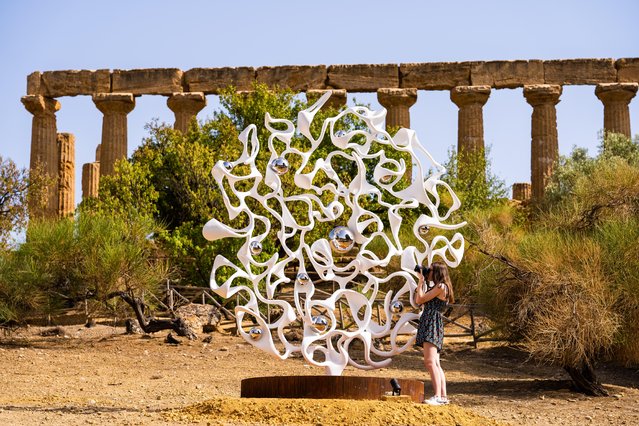 Gianfranco Meggiato’s quantum theory-inspired contemporary sculptures are juxtaposed with the ancient architecture in the Valley of the Temples Archaeological Park in Italian region Sicily on October 23, 2021. (Photo by Francesca Whitting/The Times) 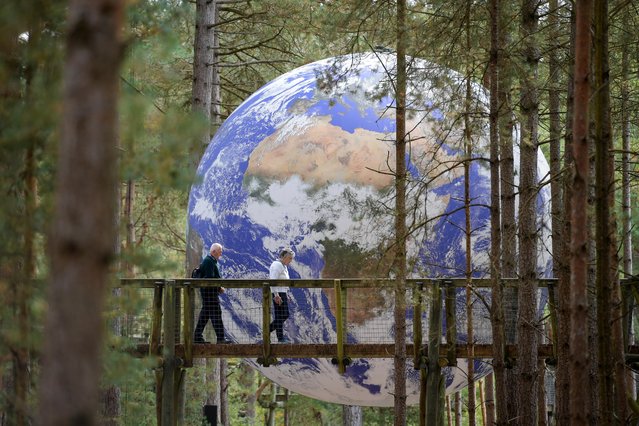 Luke Jerram's installation “Gaia” is displayed at Moors Valley Country Park and Forest, on September 17, 2021 in Ashley Heath, England. British artist Luke Jerram's installation “Gaia”, a 7 meter replica of planet Earth, is suspended in the park as part of Inside Out Dorset's international arts festival. Running from 17-26 September 2021, Activate’s Inside Out Dorset is an international outdoor arts festival commissioning and presenting a range of UK and European artists. (Photo by Finnbarr Webster/Getty Images) 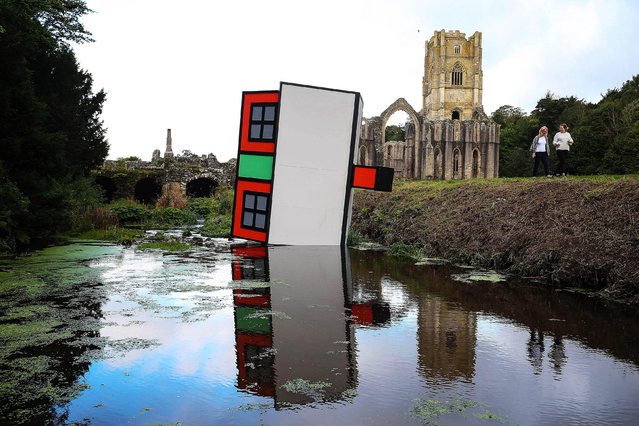 An art installation entitled Forever Home by Richard Woods, commissioned by the Climate Coalition to mark Great Big Green Week, is unveiled at Fountains Abbey, a National Trust property in North Yorkshire on September 23, 2021. The artwork aims to highlight the risk that floods linked to climate change pose to properties in the UK. (Photo by Nigel Roddis/Getty Images) 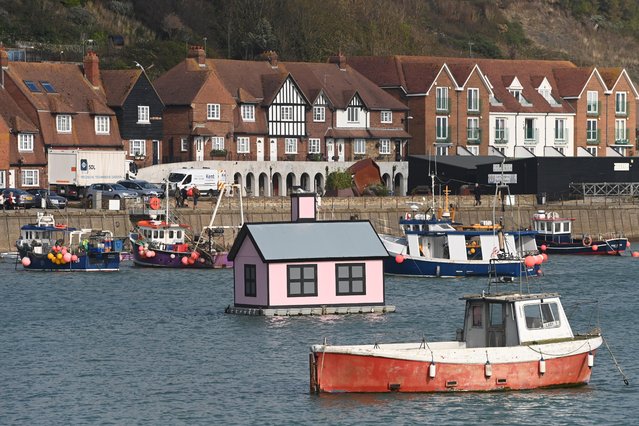 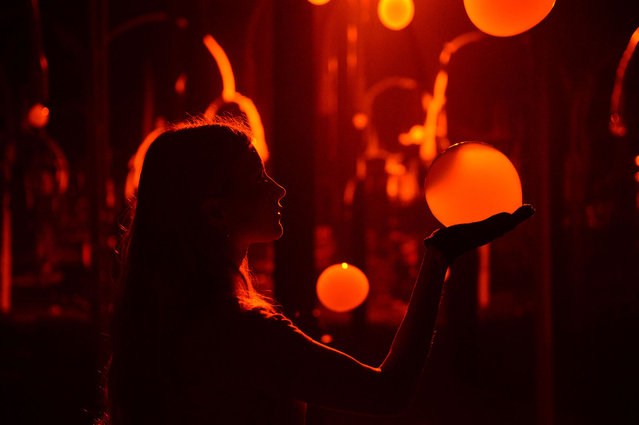