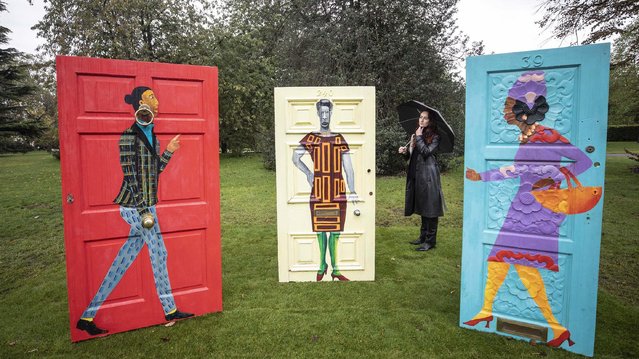 A woman walks past Lubaina Himid's “Five Conversations” which has been installed as part of the Frieze Sculpture 2020 exhibition at The English Gardens in Regent's Park, London on October 5, 2020, which features work from 12 leading international artists. (Photo by Richard Pohle/The Times) 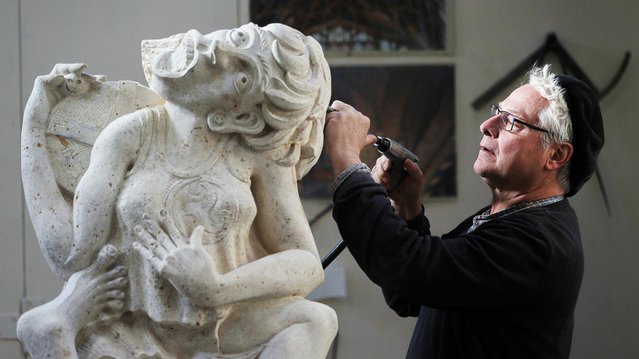 Master mason Pascal Mychalysin works on a gargoyle holding a cheese on October 15, 2020, to represent the Cheese Rollers of Gloucestershire, as part of a project for Gloucester Cathedral to depict local areas in a more modern way. (Photo by David Davies/PA Images via Getty Images) 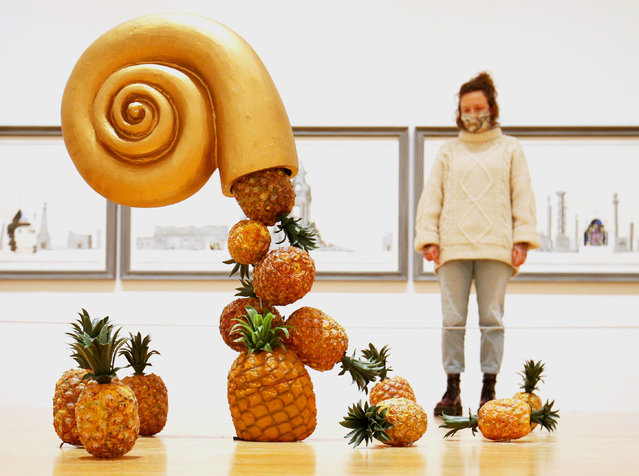 A Tate employee stands behind Edward Allington's work “From the Birth of Paradise” during a photocall for the new collection displays at Tate Britain in London on October 15, 2020. (Photo by Jonathan Brady/PA Images via Getty Images) 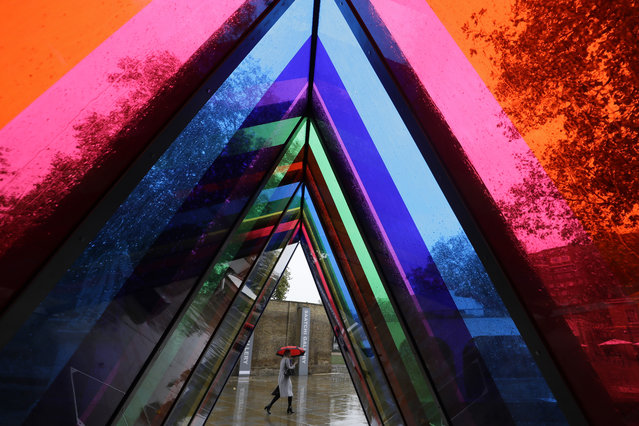 A woman shelters with an umbrella as she walks past an artwork by artist Liz West, part of the Kensington and Chelsea art week, outside the Saatchi Gallery in London, Thursday, October 29, 2020. (Photo by Kirsty Wigglesworth/AP Photo) 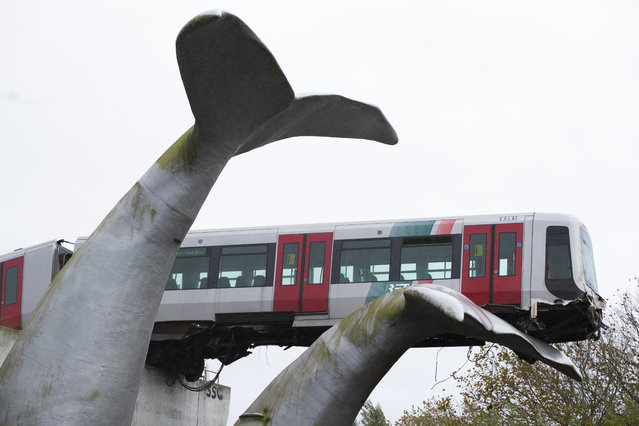 The whale's tail of a sculpture caught the front carriage of a metro train as it rammed through the end of an elevated section of rails with the driver escaping injuries in Spijkenisse, near Rotterdam, Netherlands, Monday, November 2, 2020. (Photo by Peter Dejong/AP Photo) 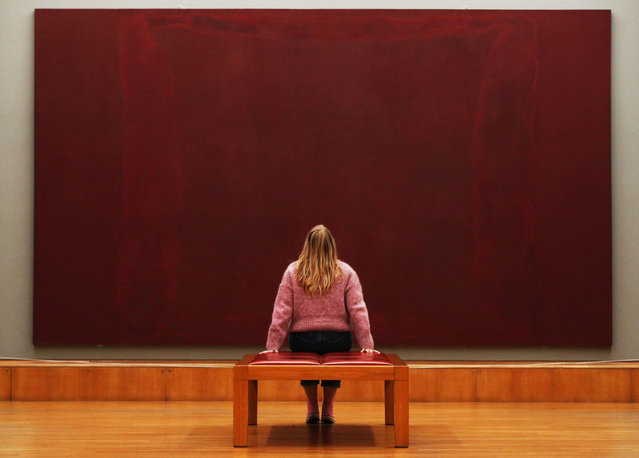 A Tate employee sits before one of Mark Rothko's Seagram Murals entitiled “Maroon on Maroon” during a photocall for the new collection displays at Tate Britain in London on October 15, 2020. (Photo by Jonathan Brady/PA Images via Getty Images) 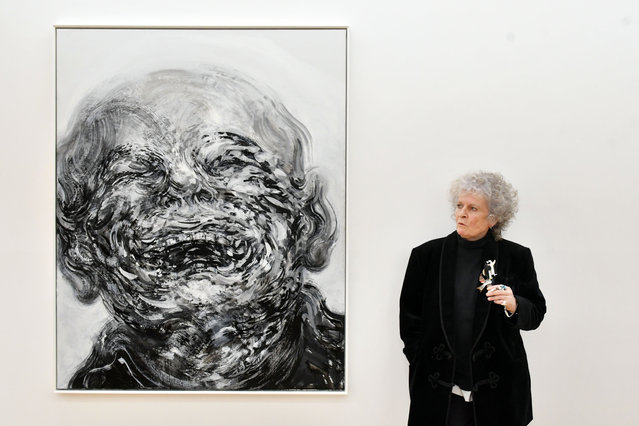 The British artist Maggi Hambling with her artwork “Laughing”, 2018, at the preview for her new exhibition at the Marlborough Gallery in London, UK on October 14, 2020. (Photo by Nils Jorgensen/Rex Features/Shutterstock) 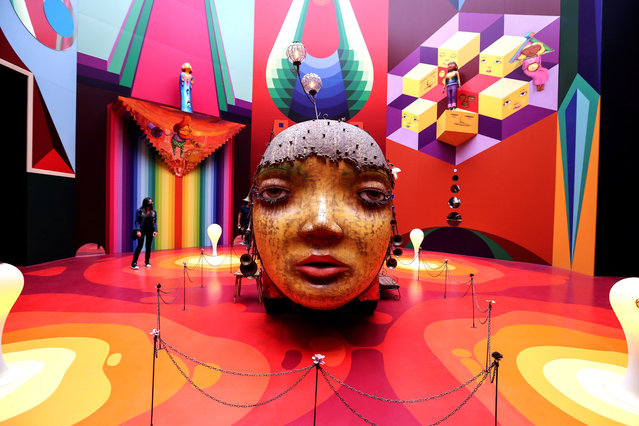 A visitor looks at an artwork that forms part of the OsGemeos exhibition, titled “Secretos (Secrets)”, in Sao Paulo, Brazil, 15 October 2020. The OsGemeos exhibit marks the return of cultural life in Sao Paulo after seven months of inactivity due to the coronavirus pandemic. The show presents personal items and artworks of the Brazilian twin street artists Otavio and Gustavo Pandolfo, aka OsGemeos, in the centenary building of the Pinacoteca de Sao Paulo. (Photo by Sebastiao Moreira/EPA/EFE) 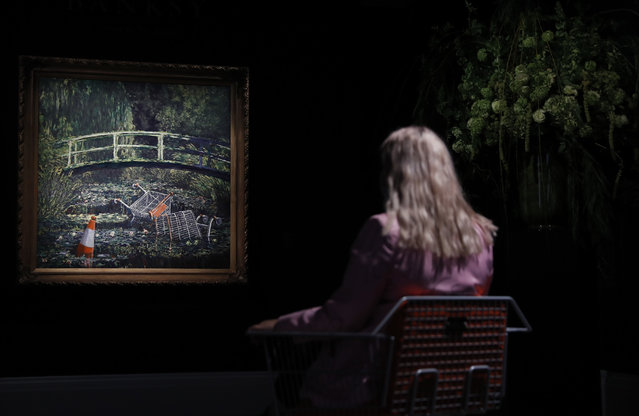 A member of staff poses in front of a work of art by Banksy entitled “Show Me The Monet” at Sotheby's auction house in London, Friday, October 16, 2020. The painting is valued at 3-5 million pounds (US$ 3.8-6.4 million) when sold at auction on October 21. (Photo by Alastair Grant/AP Photo) 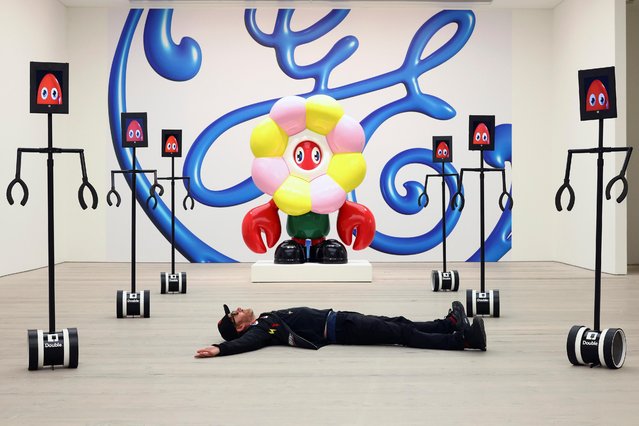 Philip Colbert poses for a photograph with robots that allow viewers to interactively engage with his Lobsteropolis exhibition at a preview event at the Saatchi Gallery in London, Britain, October 28, 2020. (Photo by Simon Dawson/Reuters) 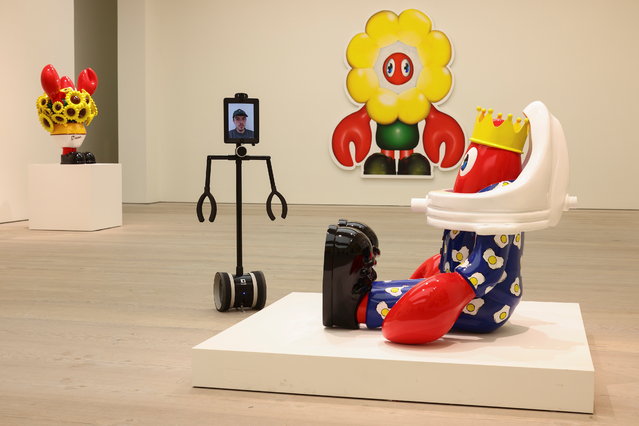 A man uses a robot to interactively engage with Philip Colbert's Lobsteropolis exhibition at a preview event at the Saatchi Gallery in London, Britain, October 28, 2020. (Photo by Simon Dawson/Reuters) 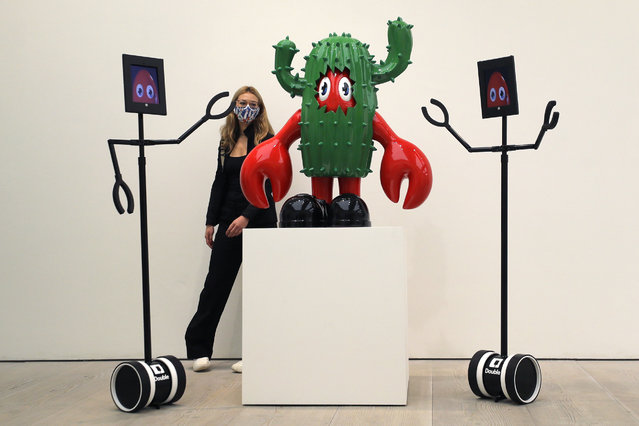 A woman and remote controlled robots view a piece of artwork by artist Philip Colbert in the Lobsteropolis exhibition at the Saatchi Gallery in London, Thursday, October 29, 2020. Lobsteropolis offers audiences the chance to view artworks in situ, or digitally via robots from the comfort of their own home. (Photo by Kirsty Wigglesworth/AP Photo) 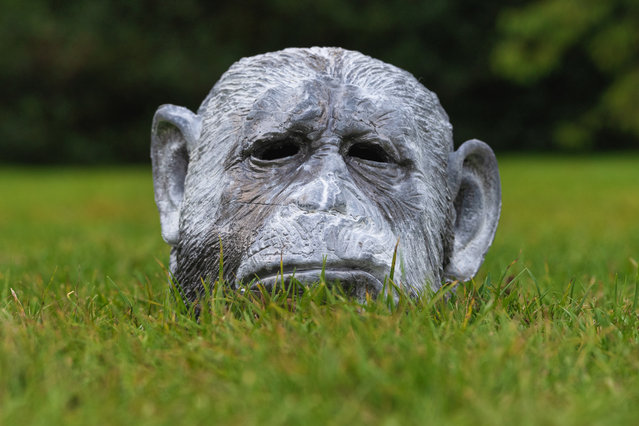 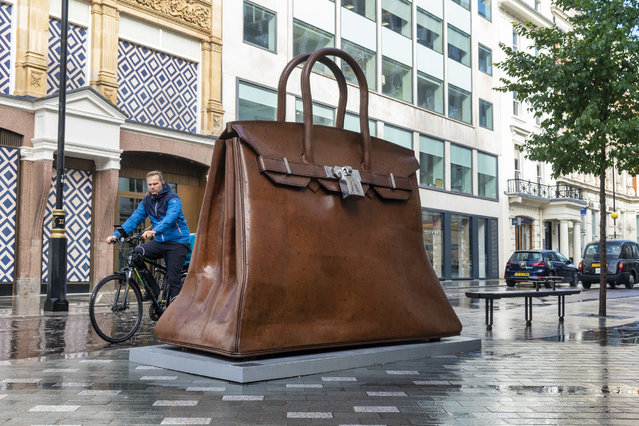 A man cycles past the Kalliopi Lemos Bag of Aspirations Mild steel and stainless steel, a giant handbag sculpture on display on the corner of New Bond Street and Brook Street in London on October 8, 2020. (Photo by Dave Rushen/SOPA Images/LightRocket via Getty Images) 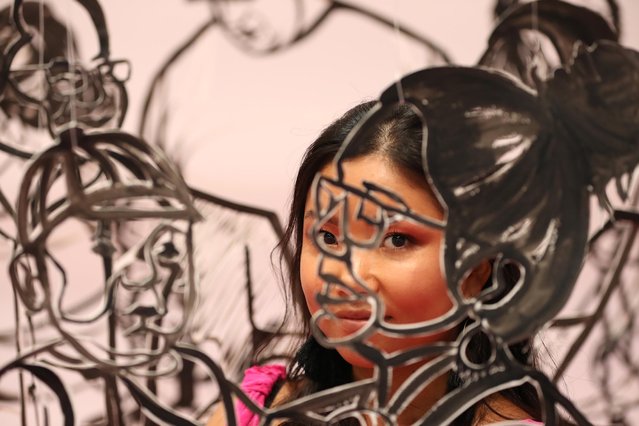 A visitor poses behind the artwork “Convergence” by artist Masarrat Fatima M Sulaimani and curated by Samar Kamel at the World Art Dubai fair at the Dubai World Trade Centre in the Gulf Emirate of Dubai, United Arab Emirates, 08 October 2020. Around 2,000 art pieces are displaying at the sixth edition of the World Art Dubai fair which is running from 08 to 10 October 2020. (Photo by Ali Haider/EPA/EFE)
Edit Del
05 Nov 2020 00:05:00, post received 0 comments
Publication archive:
←   →
Popular tags:
All tags
Last searches: