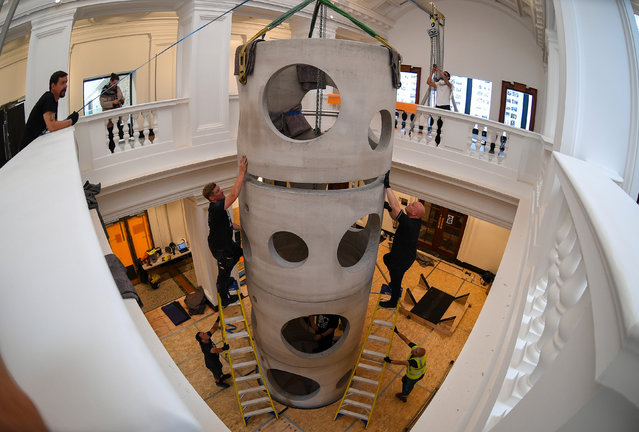 The Installation “Figureheads II” by Brazilian artist Alexandre da Cunha is put in place at The Box Museum on September 08, 2020 in Plymouth, England. The Box museum in Plymouth will open to the public on Tuesday 29th September, 4 months later than originally planned due to the COVID-19 pandemic. The Box is the largest multi-disciplinary arts and heritage museum space opening anywhere in the UK in 2020. Its ground-breaking design has completely transformed, extended and combined Plymouth’s former City Museum and Art Gallery, Central Library buildings and St Luke’s Church to create a cutting-edge, interactive cultural centre with 13 new galleries and exhibition spaces, a striking elevated archive, learning and research facilities, and the first public square to be built in Plymouth since 2004. The Box’s 12 new exhibitions showcasing contemporary art alongside Plymouth’s rich heritage, ambitious touring exhibitions alongside the city’s permanent collections, natural history alongside maritime history, interactive exhibits, giant art installations, immersive film and photography exhibits, as well as activities for children. (Photo by Finnbarr Webster/Getty Images for The Box) 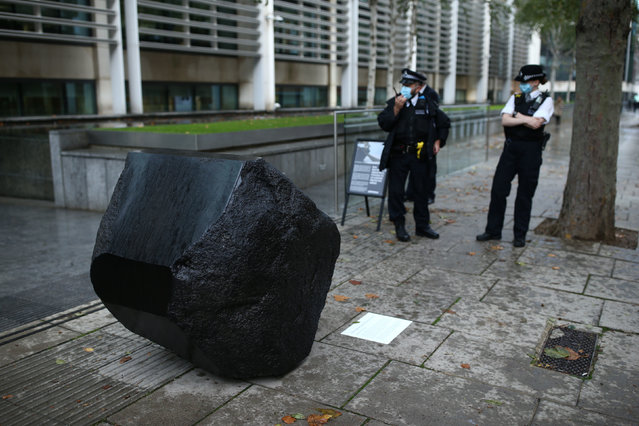 “Klang Full Stop”, one of three art installations by Fiona Banner aka the Vanity Press, outside the Home Office in Westminster, London on October 5, 2020, as part of Greenpeace's campaign to protect marine protected areas from illegal and destructive fishing. (Photo by Yui Mok/PA Images via Getty Images) 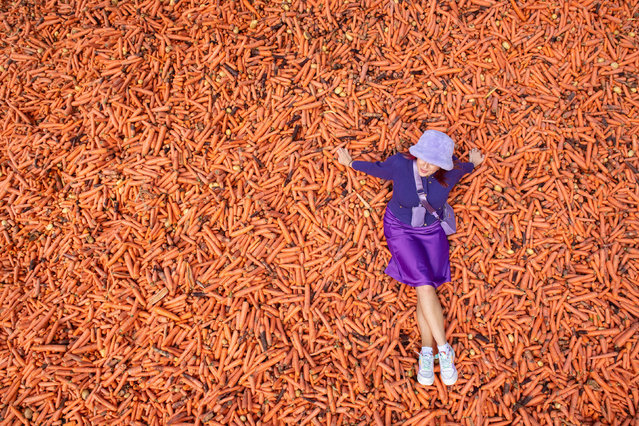 Student Lauren Gallagher with the art installation “Grounding” by Rafael Perez Evans, which is made up of 29 tonnes of unwanted carrots ouside the Ben Pimlott building at Goldsmiths College, London on October 1, 2020. (Photo by Dominic Lipinski/PA Images via Getty Images) 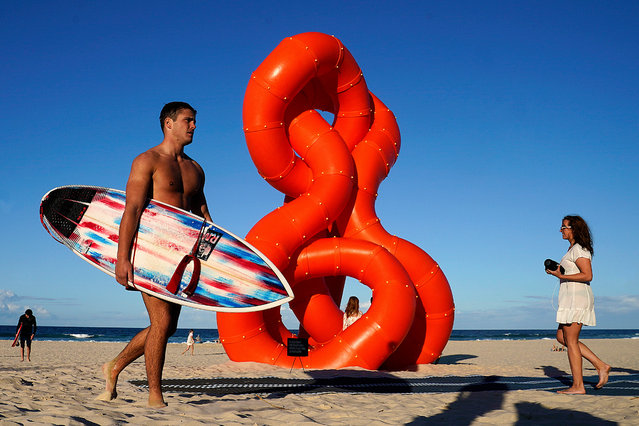 People walk past an art exhibit as part of the Swell Sculpture Festival at Currumbin Beach on the Gold Coast, Queensland, Austra​lia, 16 September 2020. (Photo by Dave Hunt/EPA/EFE) 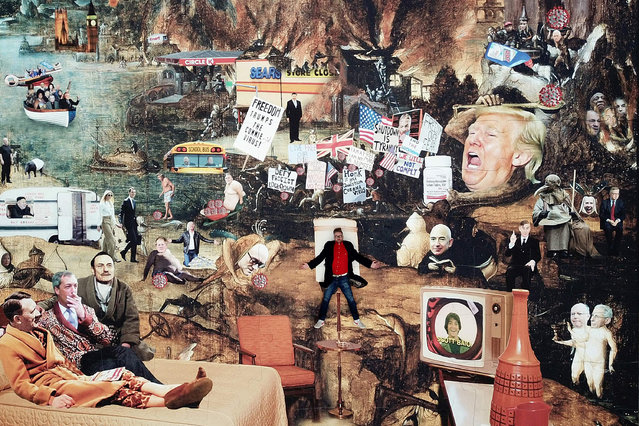 This aerial view taken in Liverpool, north west England on October 2, 2020, shows artist Cold War Steve, who's real name is Christopher Spencer, posing with his latest artwork entitled “Trumpscape”, near the Liver Building. Trumpscape is a 144-piece, 12.5 x 11 meter artwork made in the form of a jigsaw puzzle, and is a portrayal of US President Donald Trump's America in the age of the COVID-19 pandemic. (Photo by Paul Ellis/AFP Photo) 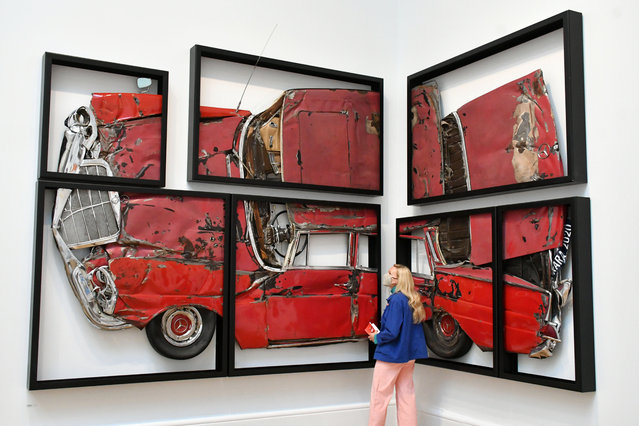 A visitor looks at Ron Arad’s artwork called “Oh Lord, Won’t You Buy Me?”, at the Royal Academy of Arts summer exhibition in London, England on September 28, 2020. (Photo by Nils Jorgensen/Rex Features/Shutterstock) 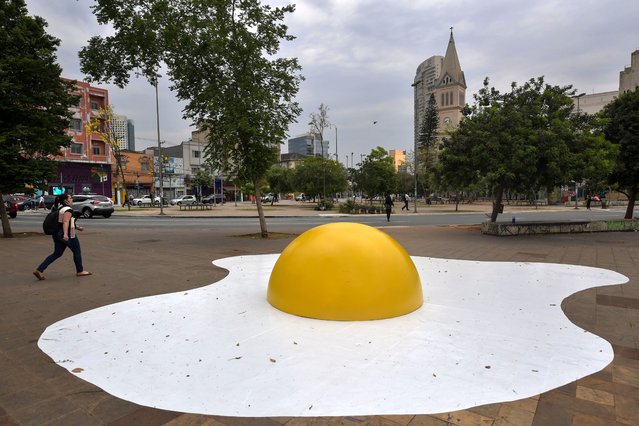 View of an urban intervention called “Eggcident” – a warning for the severity of global warming – by Dutch artist Henk Hofstra during the annual “Virada Sustentavel SP” event, in Sao Paulo, Brazil, on September 18, 2020. The Virada Sustentavel SP is a cultural party that offers 5 weeks of attractions such as artistic interventions, projections and graffiti around the city. (Photo by Nelson Almeida/AFP Photo) 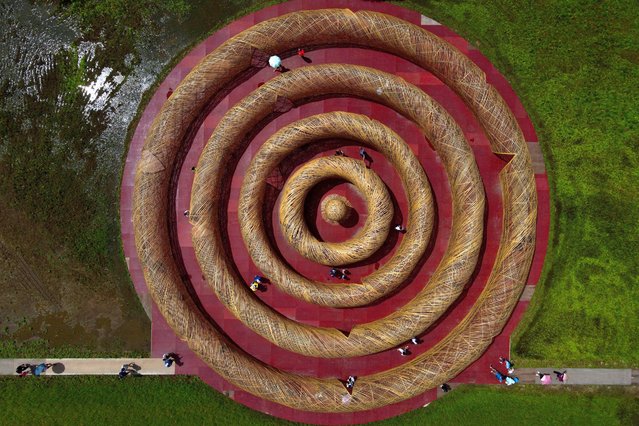 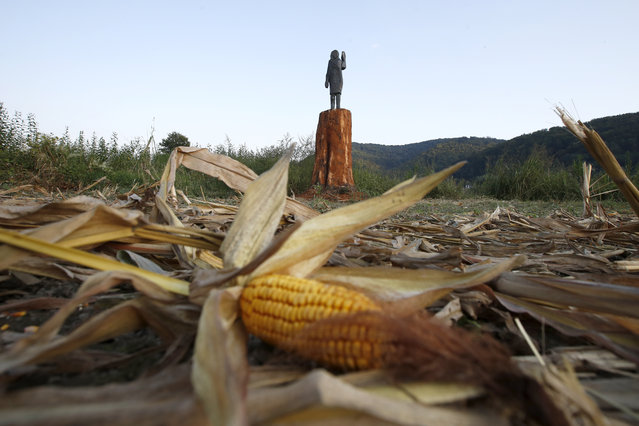 A bronze statue representing the U.S first lady Melania Trump made by Brad Downey, a Berlin-based U.S. artist, is erected in her birthplace of Sevnica, Slovenia, Tuesday, September 15, 2020, after a previous one, made in wood, was set alight. Melania Trump was born and grew up in Slovenia before moving abroad as a fashion model. (Photo by AP Photo/Stringer) 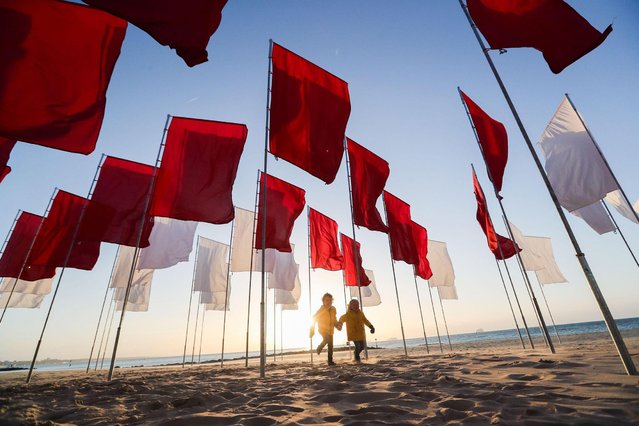 An artwork by Luke Jerram entitled “In Memoriam” has ben set up on Sandbanks beach in Poole, UK as part of the Bournemouth Arts by the Sea Festival on September 27, 2020. The Sea of flags made up of 100 bed sheets set up in the shape of a red cross on a white background offers the public a place to visit to remember those who have died during the COVID-19 pandemic and to pay tribute to NHS workers and volunteers caring for all those affected by the crisis. (Photo by Richard Crease/Alamy Live News) 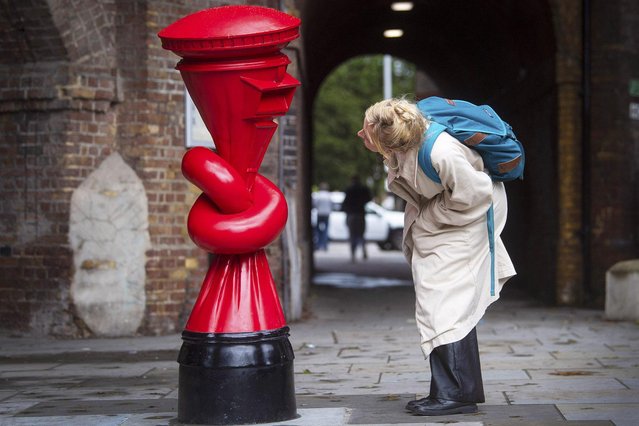 A woman looks at artwork called “Alphabetti Spaghetti” by British sculptor Alex Chinneck, one of a series of “knotted” postboxes, installed as part of a public art trail for Kensington & Chelsea Art Week on October 3, 2020. (Photo by Victoria Jones/PA Images via Getty Images) 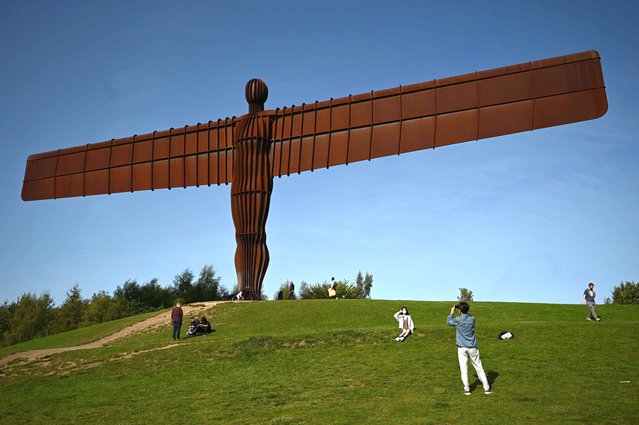 Visitors are seen at the iconic sculpture designed by Antony Gormley “Angel of the North” in Gateshead, northeast England, on September 17, 2020. The British government on Thursday announced new restrictions for northeast England, the latest region to see a surge in coronavirus cases as Prime Minister Boris Johnson warned of a “second hump” in nationwide transmission. Residents in the northeast, which includes the cities of Newcastle and Sunderland, will no longer be allowed to socialise outside their own homes or support bubble from Friday onwards. (Photo by Oli Scarff/AFP Photo) 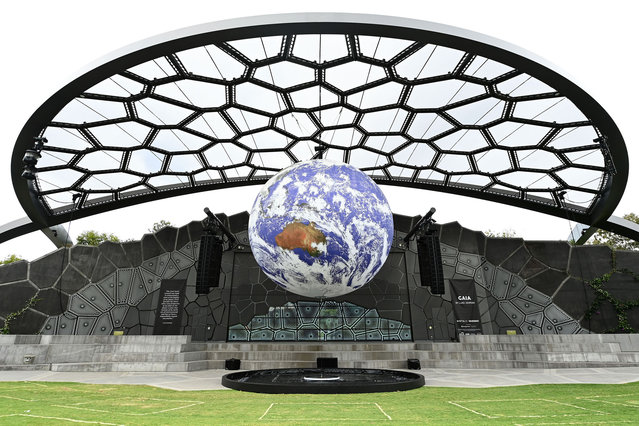 Art installation “Gaia” is seen on display at HOTA on September 30, 2020 in Gold Coast, Australia. The work by UK artist Luke Jerram measures seven metres in diameter, with internal lighting combining 120dpi detailed NASA imagery of the Earth. The spherical sculpture is accompanied by a specially made surround sound composition by composer Dan Jones. (Photo by Quinn Rooney/Getty Images) 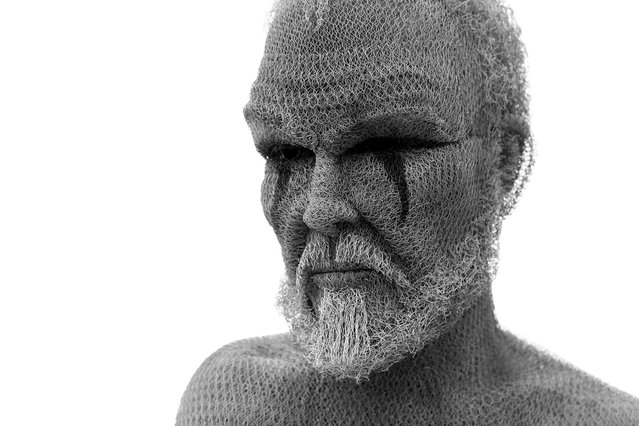 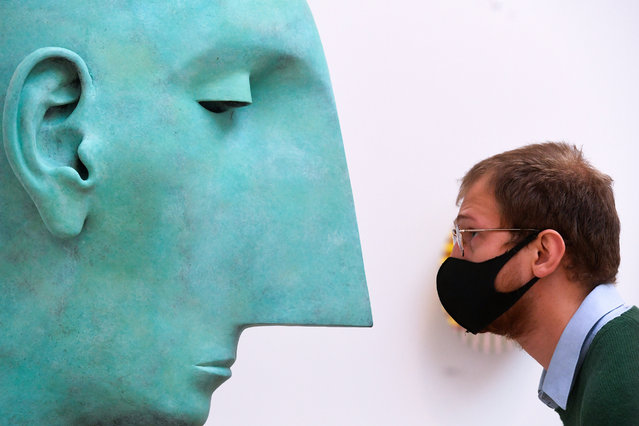 A member of staff looks at “Head II” by Tim Shaw at a preview for the 'summer' exhibition at the Royal Academy of Arts in London on September 28, 2020. The 252nd Summer Exhibition was postponed because of the coronavirus pandemic and will take place in the autumn for the first time. (Photo by Kirsty O'Connor/PA Images via Getty Images) 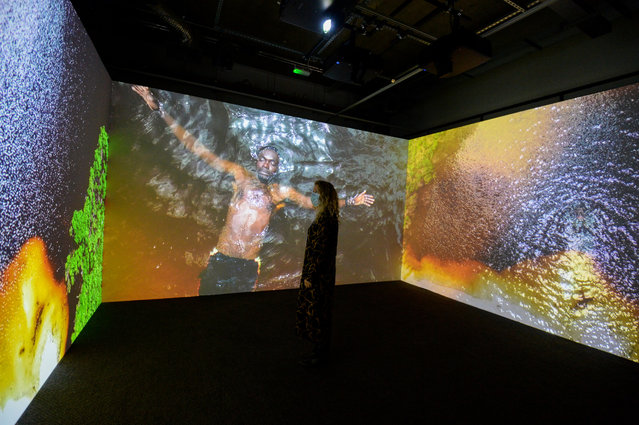