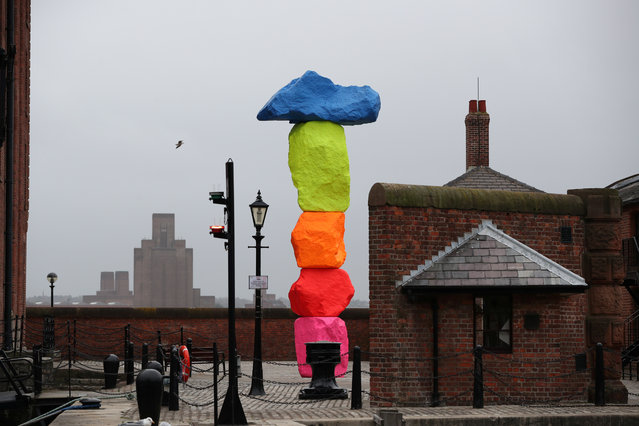 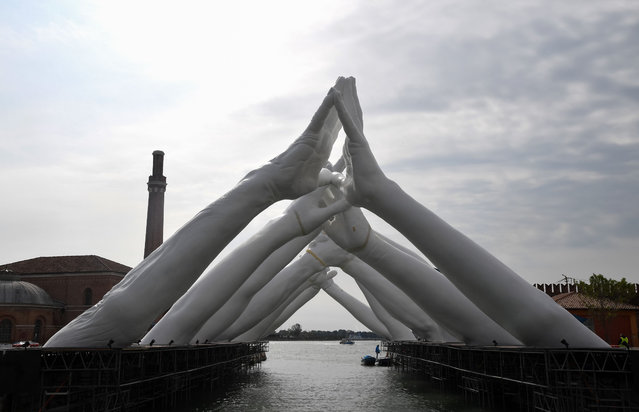 A general view shows Italian artist's Lorenzo Quinn's “Building Bridges”, a sculptural installation showing six pairs of arching hands creating a bridge over a Venetian waterway in the Arsenale former shipyard, ahead of the 58th Internatinal Venice Biennale art exhibition on May 8, 2019 in Venice. (Photo by Tiziana Fabi/AFP Photo) 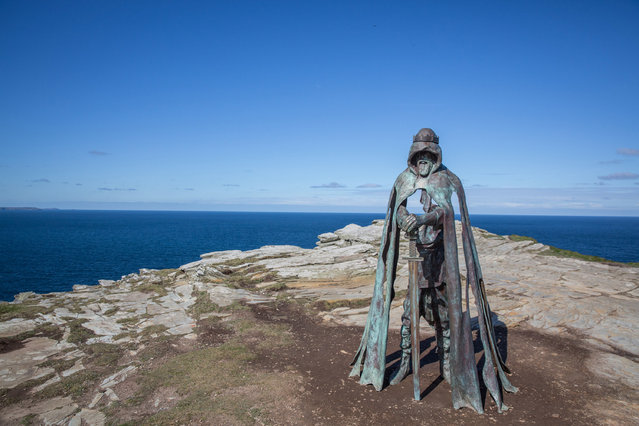 The new “Gallos” sculpture that has been erected at Tintagel Castle is seen in Tintagel on April 28, 2016 in Cornwall, England. The English Heritage managed site and the nearby town have long been associated with the legend of King Arthur and continue to attract large visitor numbers. However, efforts by English Heritage to update the visitor experience with the Gallos sculpture, along with a rock carving of Merlin's face, which English Heritage say are inspired by the legend of King Arthur and Tintagel Castles royal past, have met with criticism from some Cornish nationalists and historians. (Photo by Matt Cardy/Getty Images) 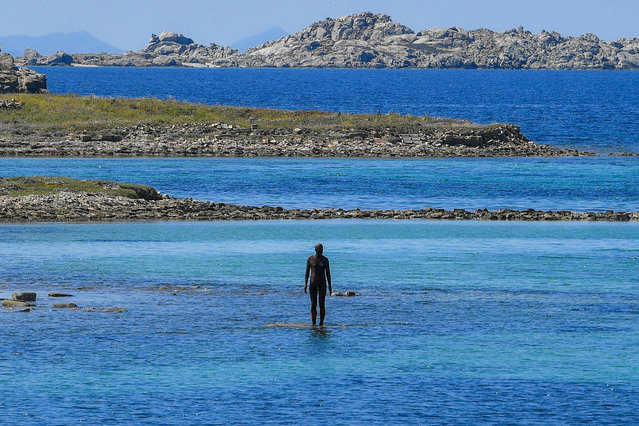 The statue “6 times left” by renowned British artist Antony Gormley, and part of his exhibition “Sight” stands in the sea at the entrance od the port of the island of Delos, a UNESCO World Heritage Site, on May 3, 2019. Near the Greek island of Mykonos, in the Cyclades, the uninhabited island of Delos, known for its archaeological riches, hosts for the first time on an ancient Greek site an exhibition of contemporary art: 29 sculptures by the British artist Antony Gormley. The exhibition will run until October 30, 2019. (Photo by Louisa Gouliamaki/AFP Photo) 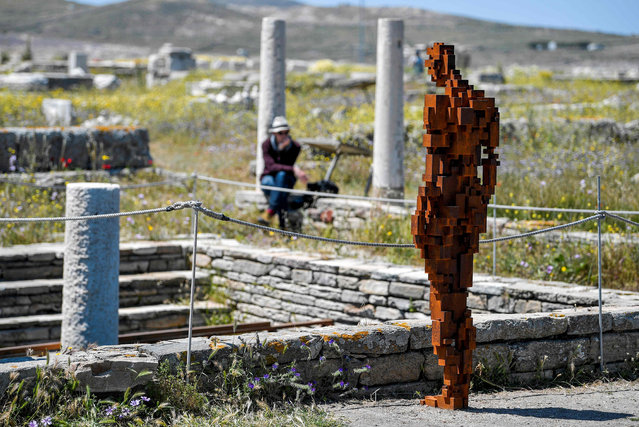 A visitor sits next o the statue “Water” by renowned British artist Antony Gormley, part of his exhibition “Sight” at the archeological site of the island of Delos, a UNESCO World Heritage Site on May 3, 2019. Near the Greek island of Mykonos, in the Cyclades, the uninhabited island of Delos, known for its archaeological riches, hosts for the first time on an ancient Greek site an exhibition of contemporary art: 29 sculptures by the British artist Antony Gormley. The exhibition will run until October 30, 2019. (Photo by Louisa Gouliamaki/AFP Photo) 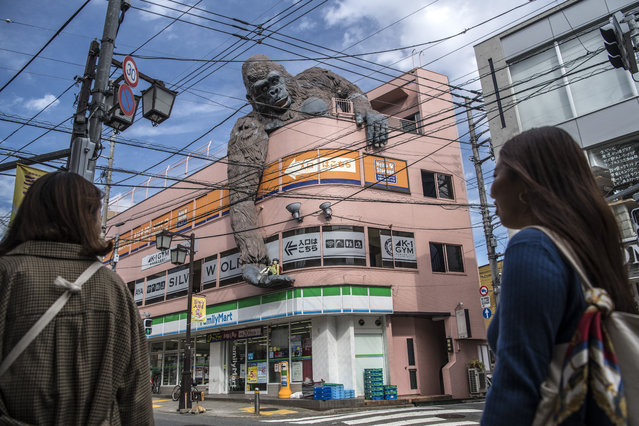 A large King Kong sculpture hangs over the side of a building, on October 24, 2018 in Tokyo, Japan. (Photo by Carl Court/Getty Images) 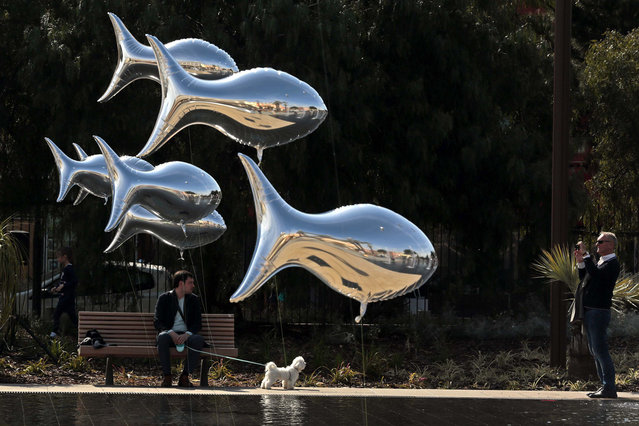 A man takes a photo of fish-shaped balloons floating above water fountains in Nice, France, to mark April Fools Day, or “Poisson d’Avril”, on April 1, 2014. (Photo by Eric Gaillard/Reuters) 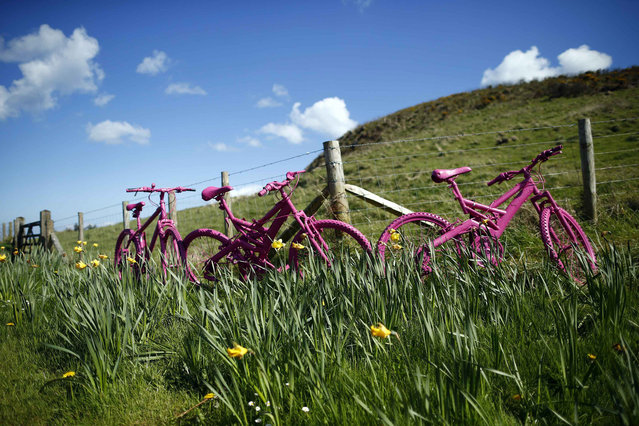 Pink bicycles are positioned in a field near the village of Balintoy April 24, 2014. They have been painted pink to welcome the arrival of the Giro d'Italia cycle race whose race leader wears a pink jersey. (Photo by Cathal McNaughton/Reuters) 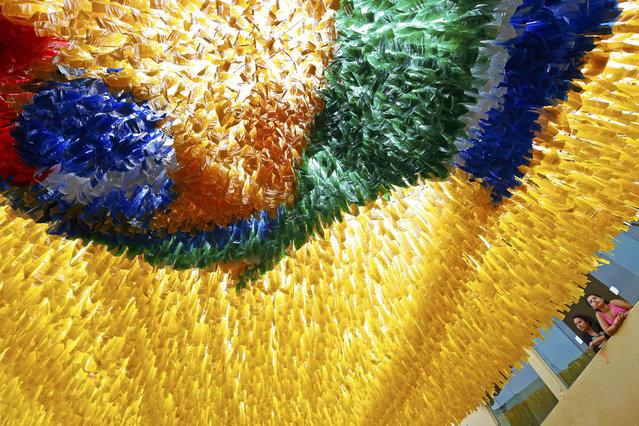 Women look over the balcony of an apartment near colored ribbons, depicting the colors of national flags, which are used to decorate a street during the 2014 World Cup in Manaus June 16, 2014. (Photo by Yves Herman/Reuters) 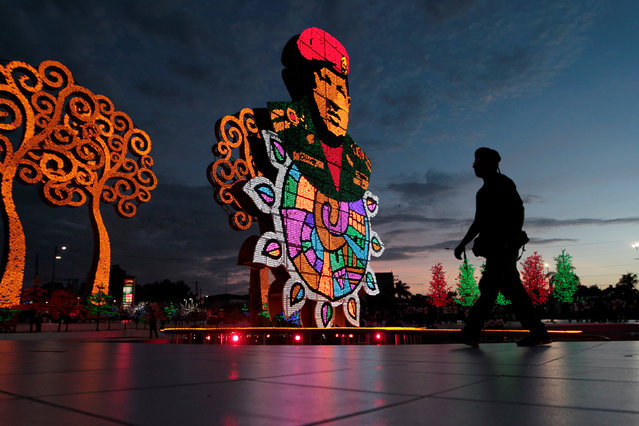 A man walks near a monument in honour of late Venezuelan President Hugo Chavez during a march in support of Nicaragua's President Daniel Ortega in Managua, Nicaragua July 15, 2016. (Photo by Oswaldo Rivas/Reuters) 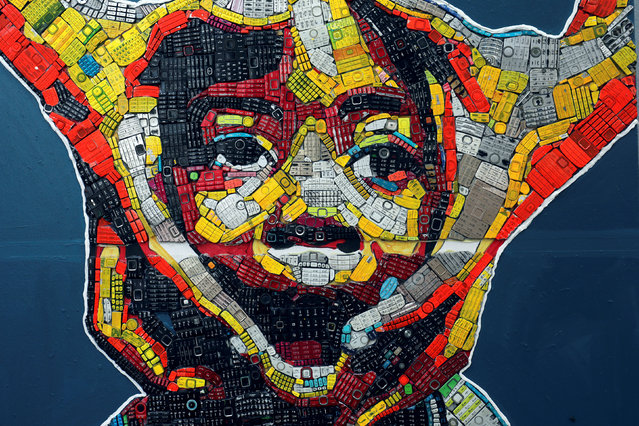 An artwork created with discarded phone keyboards is pictured at the workshop of 24-year-old artist Desire Koffi, in Abidjan, Ivory Coast December 3, 2018. (Photo by Luc Gnago/Reuters) 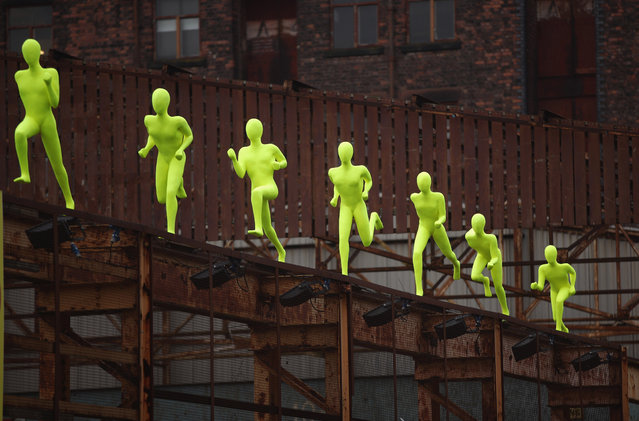 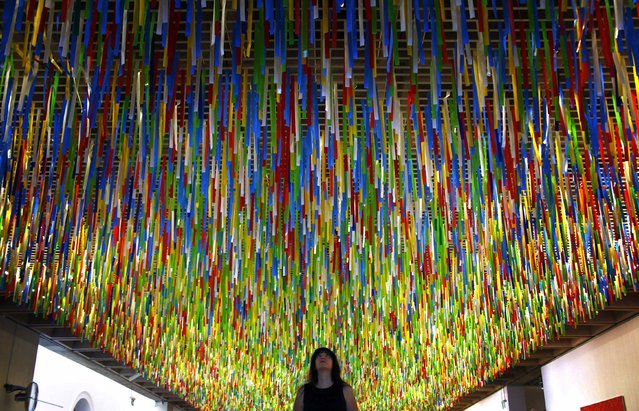 Australian artist Nike Savvas inspects her artwork titled “Rally” that hangs from the roof of the New South Wales Art Gallery April 7, 2014. Savvas says her hanging installation, which is made up of more than 60,000 colored ribbons being blown by fans, was inspired by her recent visit to Brazil and represents “fields of color in motion that swirls and regathers like an unpredictable crowd”. (Photo by David Gray/Reuters) 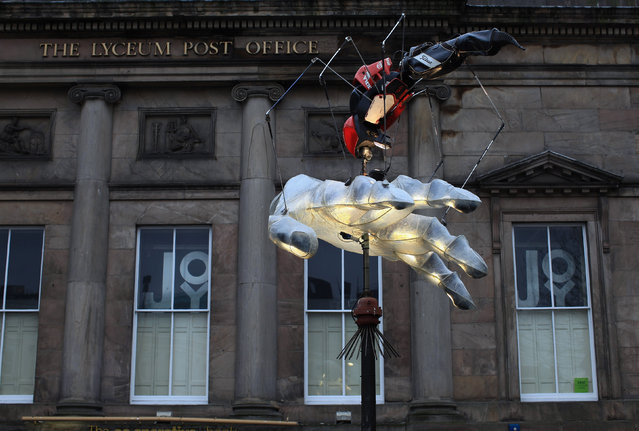 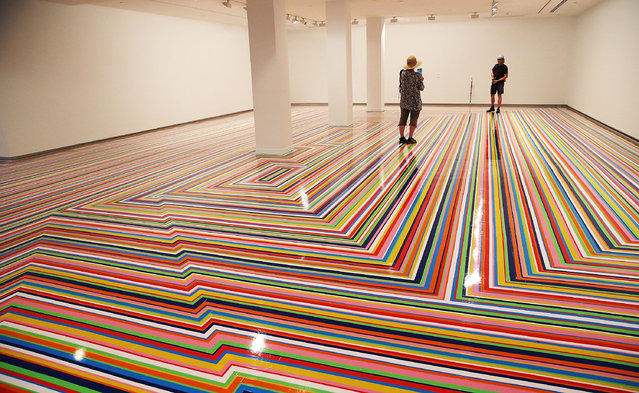 Artist Jim Lambie's “Zobop” floor work is displayed during a media preview as part of the 19th Beinnale of Sydney at the Museum of Contemporary Art on March 18, 2014 in Sydney, Australia. (Photo by Mark Metcalfe/Getty Images) 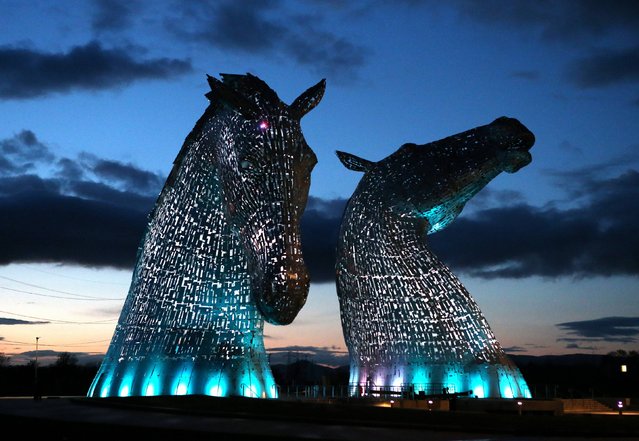 A lighting test is carried out on the Kelpies in Falkirk ahead of their official opening to the public later this month, on April 7, 2014. Designed by sculptor Andy Scott each of The Kelpies stands up to 30 metres tall and each one weighs over 300 tonnes. (Photo by Andrew Milligan/PA Wire) 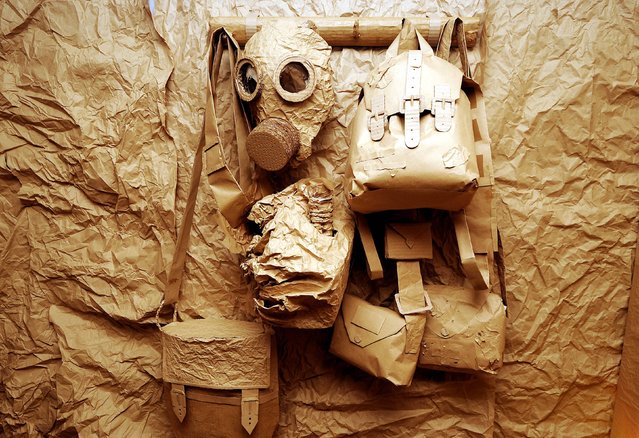 A gas mask at a paper and cardboard exhibition to commemorate First World War centenary at Birmingham University, Birmingham, on February 27, 2014. (Photo by Rui Vieira/PA Wire) 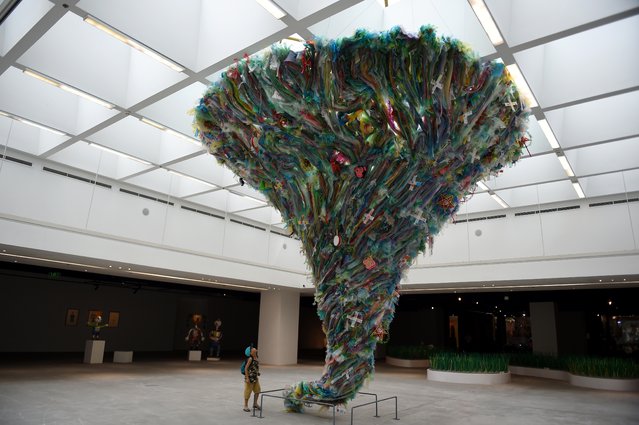 A boy looks up at the installation entitled “Tornado by plastic waste” by artists from the social enterprise To He at the exhibition “Plastics Planet” in Hanoi on June 27, 2019. (Photo by Nhac Nguyen/AFP Photo) 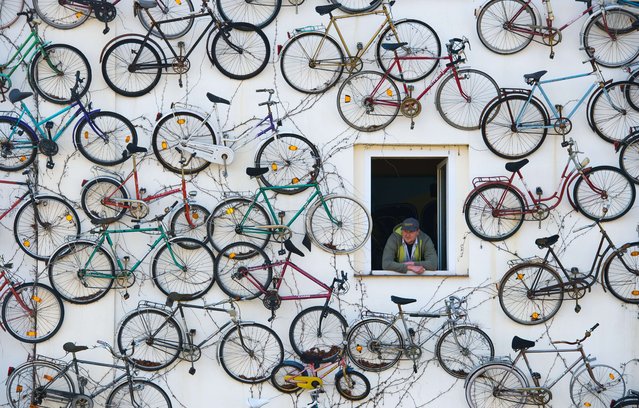 Pet Horstmann, head of the Fahrradhof bike shop in Altlandsberg, eastern Germany, looks out of his house decorated with 210 old bikes, on March 11, 2014. Inside, the shop offers more than 1,000 new bikes for sale. (Photo by Patrick Pleul/AFP Photo/DPA) 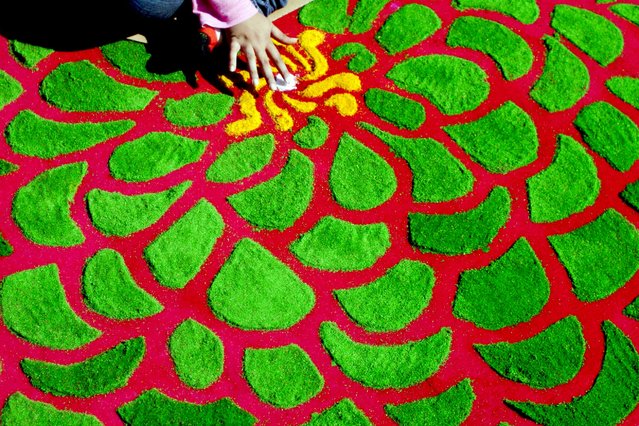 People work at detailing a 700m long colored sawdust carpet along a street, in Tegucigalpa, Honduras, April 17, 2014. Almost one hundred people took part in the preparation of a sawdust-made carpet for the Holy Burial procession on Good Friday as part of the Easter festivities. (Photo by Gustavo Amador/EPA) 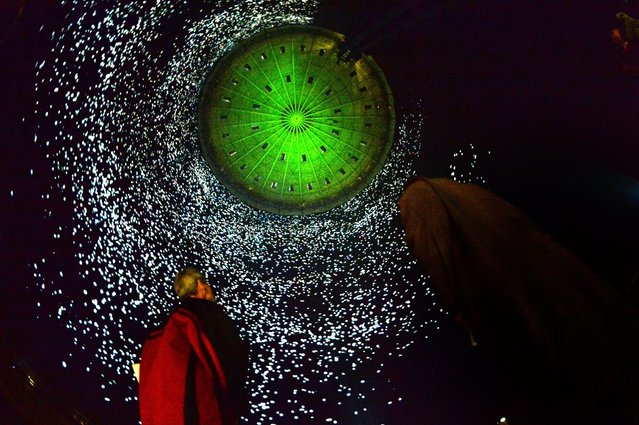 Two journalists look at the 100 meters high installation “320° Light” by Urbanscreen in the inner walls of the Gasometer, a former gas holder in Oberhausen, Germany, 10 April 2014. The exhibition runs from 11 April to 30 December 2014 and shows more than 150 photographies or casts of important works of art from various periods. (Photo by Matthias Balk/EPA) 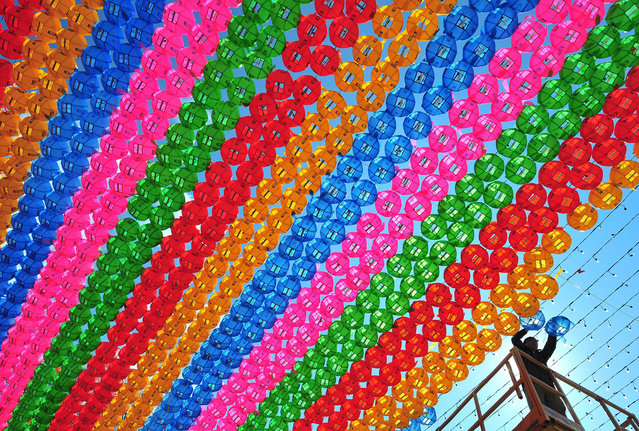 A South Korean worker sets lotus lanterns at Jogye Temple in Seoul on March 21, 2014 ahead of celebrations marking Buddha's birthday on May 6. Buddhism is one of South Korea's largest and most active religions with millions of followers. Although the exact date is unknown, Buddha's official birthday is celebrated on April 8th of the lunar calendar in South Korea. (Photo by Jung Yeon-Je/AFP Photo) 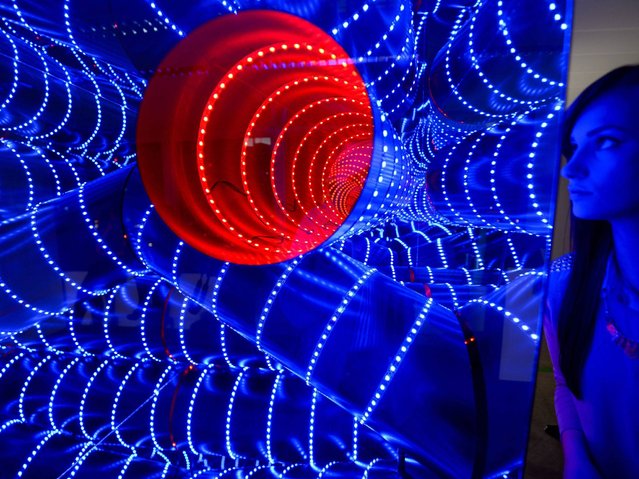 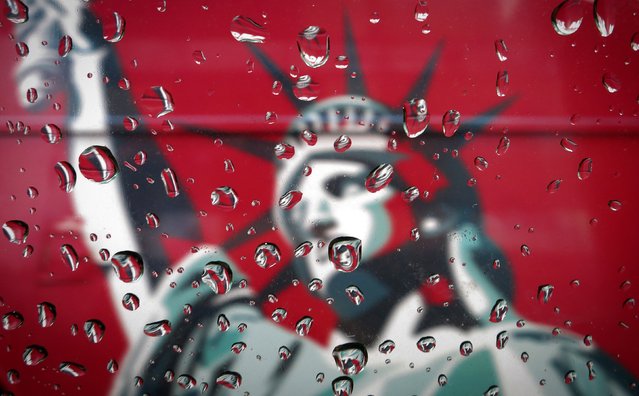 An image of the Statue of Liberty is pictured though a rain covered taxi window in New York April 15, 2014. (Photo by Carlo Allegri/Reuters) 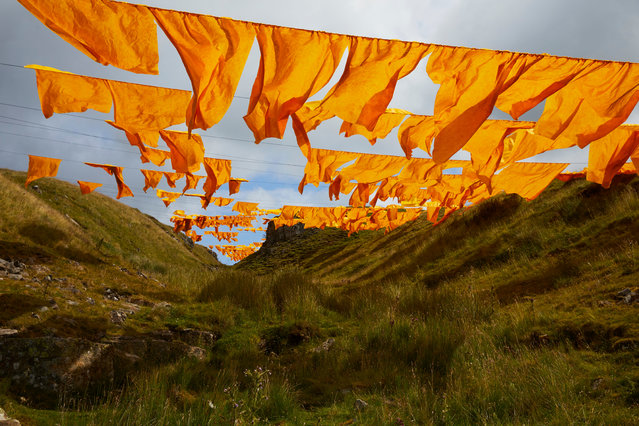 Monumental landscape artwork “Hush” by installation artist Steve Messam hangs in the moors of Teesdale on July 18, 2019 in Barnard Castle, England. The outdoor installation is inspired by the geology, mining history and landscape of the area. It hangs over Bales Hush, a deep gauge in the terrain created when miners flushed the area with water to reveal the geological riches below. Hundreds of metres of recyclable saffron yellow fabric blow in the wind. (Photo by Christopher Thomond/The Guardian)
Edit Del
20 Jul 2019 00:03:00, post received 0 comments
Publication archive:
←   →
Popular tags:
All tags
Last searches: