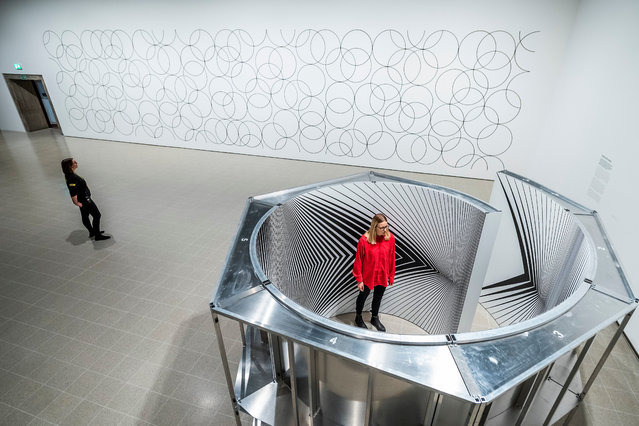 A major exhibition at the Hayward Gallery in London, UK on October 22, 2019 is devoted to the work of celebrated British artist Bridget Riley. As one of the most distinguished and internationally renowned artists working today, Bridget Riley's pioneering approach to painting involves the skilful balancing of form and colour, yielding a continuous but highly varied enquiry into the nature of abstraction and perception. (Photo by Guy Bell/Rex Features/Shutterstock) 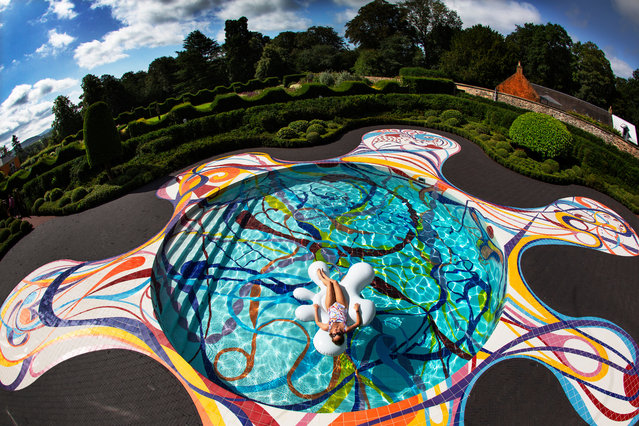 Gateway, a swimming pool designed by the Portuguese artist Joana Vasconcelos, is unveiled at the Jupiter Artland sculpture park in Edinburgh, Scotland on July 21, 2019, before it opens to the public as part of the Edinburgh art festival. (Photo by Murdo MacLeod/The Guardian) 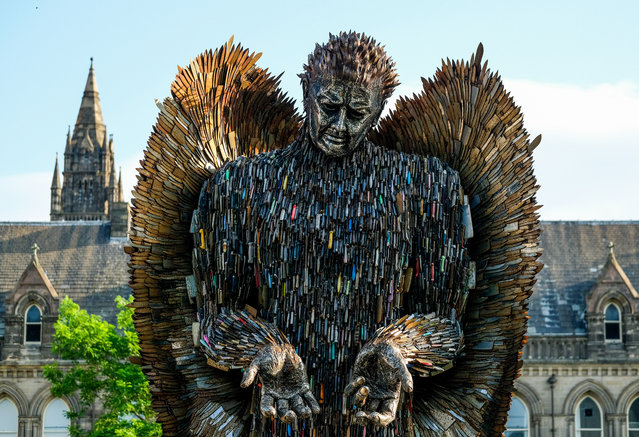 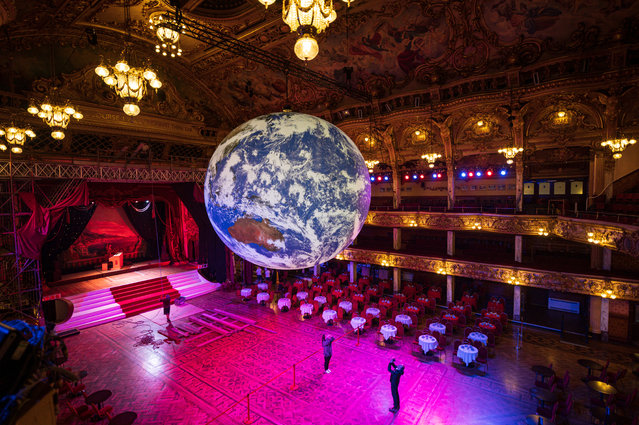 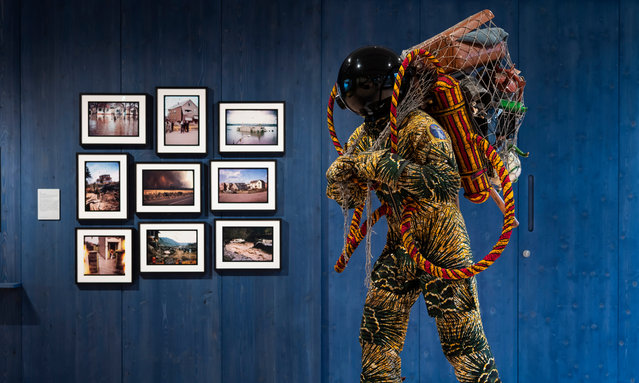 Refugee Astronaut III by Yinka Shonibare stands next to a series of photographs by Adam Chodzko at Wellcome Collection in London, England on September 03, 2019. This lifesize figure wears a suit made from a fabric reminiscent of traditional Nigerian textiles. Carrying a net of possessions, Shonibare’s work invites visitors to create their own stories about who the figure might be, where they have come from and why they had to leave Earth in such a hurry. (Photo by Steven Pocock/Wellcome Collection) 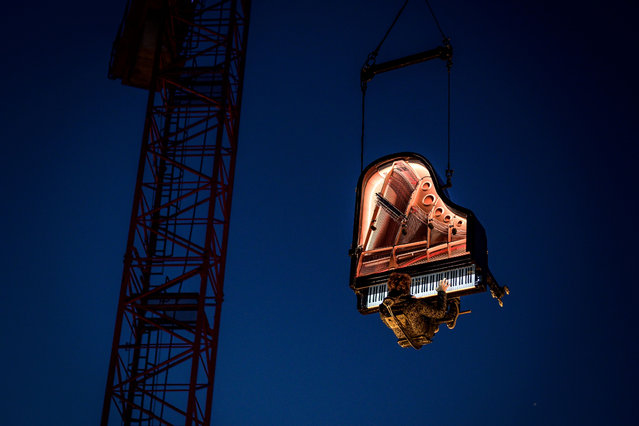 Swiss pianist and composer Alain Roche performs “Chantier” suspended in the air with his grand piano under a moving crane at dawn on August 16, 2019 during the 20th “Jeux du Castrum”, a multidisciplinary festival that takes place until August 18, 2019 in Yverdon-les-Bains. (Photo by Fabrice Coffrini/AFP Photo) 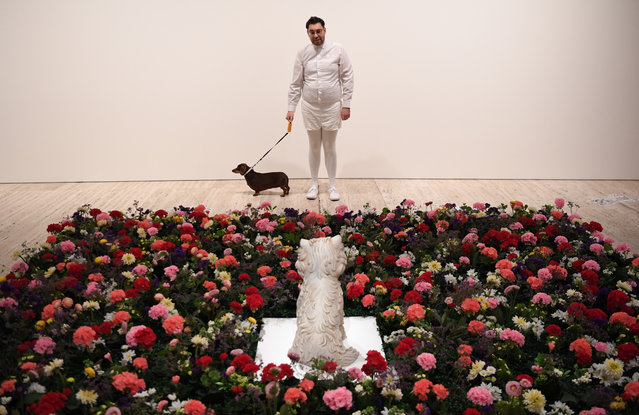 Artist David Capra and his sausage dog, Teena, looking at the exhibit “Puppy” by Jeff Koons during a media preview for Making Art Public: 50 years of Kaldor Public Art Projects at Art Gallery Of NSW on September 06, 2019 in Sydney, Australia. (Photo by James D. Morgan/Getty Images) 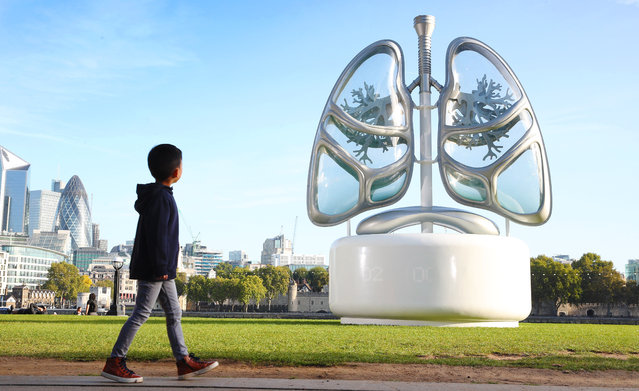 A 16ft pair of “LUNGS” has been unveiled in London, England on September 19, 2019. As part of a wider campaign on air pollution, E.ON has built LUNGS to make the invisible visible and raise awareness of the issue. Linked to the live levels of air pollution in London. (Photo by PinPep/Rex Features/Shutterstock) 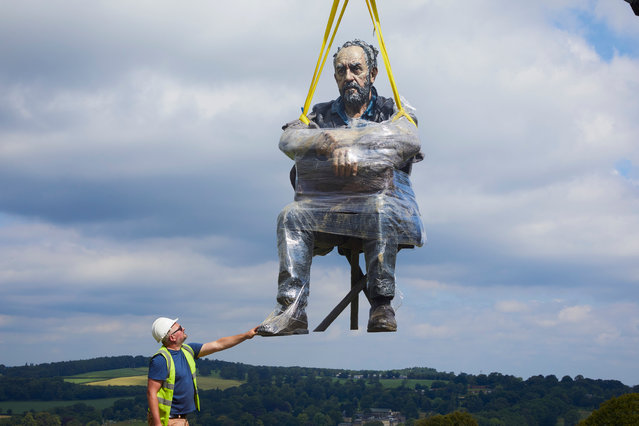 A three-metre-tall painted bronze sculpture, Seated Man 2016, by the artist Sean Henry, is lifted into its new home on July 23, 2019 at Yorkshire Sculpture Park in Wakefield, England. (Photo by Christopher Thomond/The Guardian) 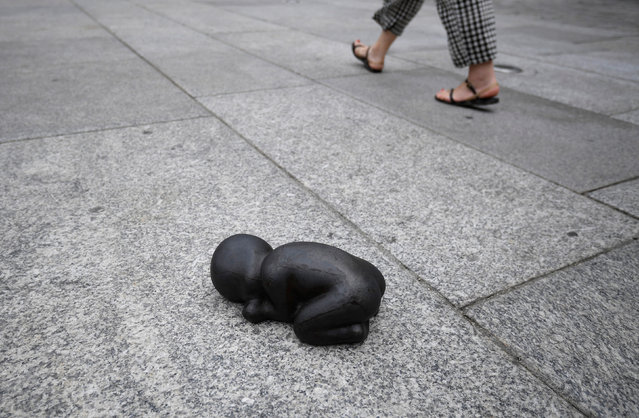 Iron Baby, a sculpture that is part of Antony Gormley’s exhibition at the Royal Academy of Arts in London, England on September 14, 2019. (Photo by Toby Melville/Reuters) 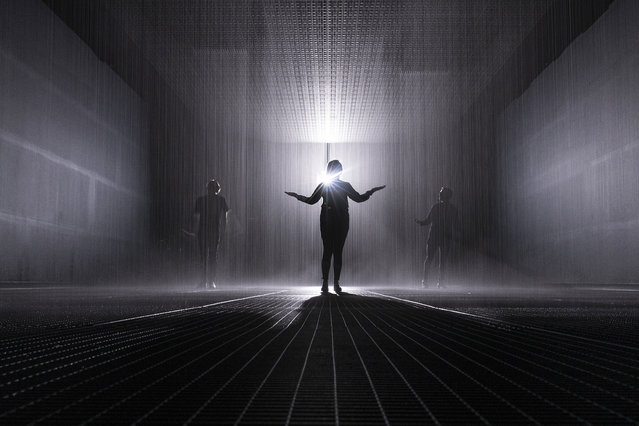 Art installation “Rain Room” by Random International is seen in the Jackalope Pavilion on August 08, 2019 in Melbourne, Australia. The installation is a 100 square metre field of continuous rainfall, and is a responsive environment engaging all the senses; millions of water droplets respond to your presence by ceasing to fall wherever movement is detected, allowing you to be fully immersed in the rain while simultaneously protected from it. (Photo by Daniel Pockett/Getty Images) 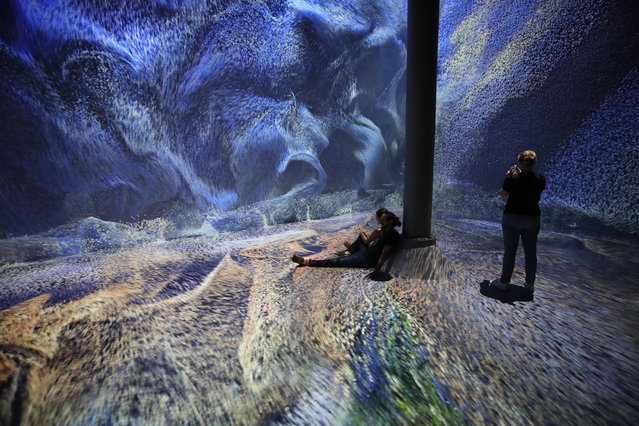 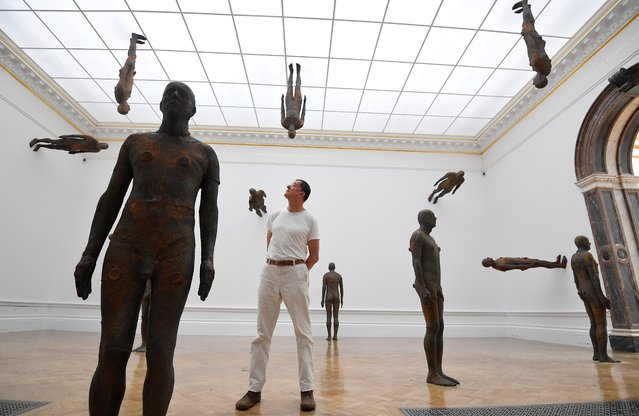 British sculptor Antony Gormley poses with his installation “Matrix III” ahead of his exhibition at Royal Academy of Arts on September 16, 2019 in London, England. (Photo by Toby Melville/Reuters) 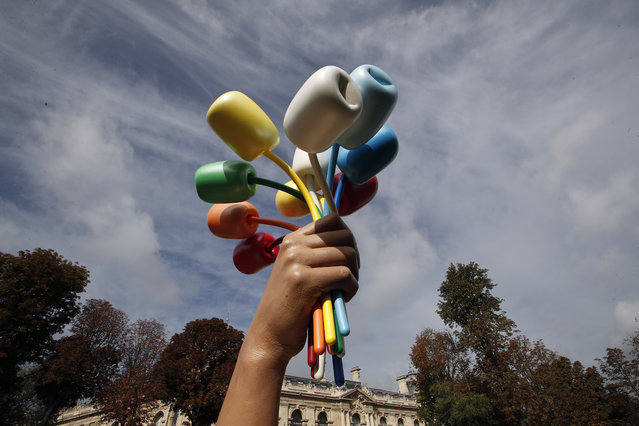 New York-based artist Jeff Koons poses as he unveiled his much-awaited and controversial sculpture “Bouquet of Tulips” dedicated to the victims of the terrorists attacks, in a garden next to the Champs-Elysee near the Petit Palais museum in Paris, Friday, October 4, 2019. (Photo by Francois Mori/AP Photo) 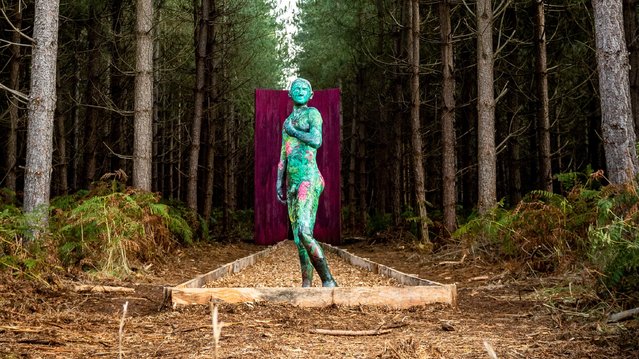 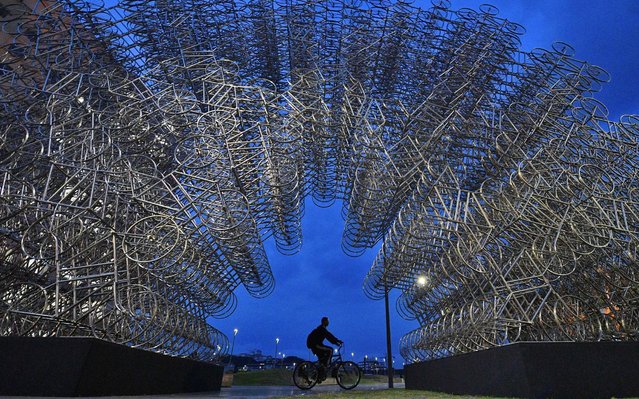 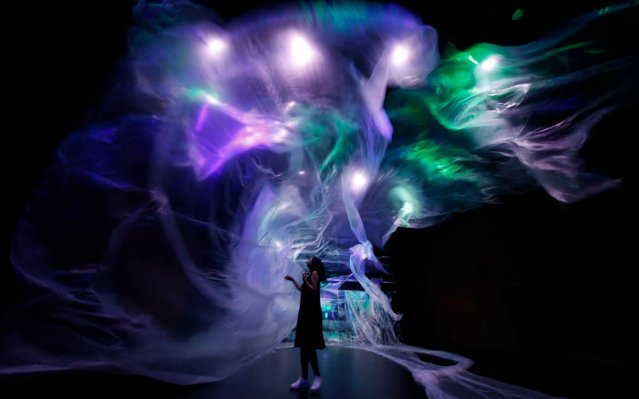 A visitor is silhouetted amongst plastic sheets as part of an installation titled “Whispers” by the Light Society during a media preview of the Singapore Night Festival, in Singapore, 21 August 2019. The Singapore Night Festival will run from 23 to 31 August 2019 and features installations and exhibits around the Civic District. (Photo by Wallace Woon/EPA/EFE/Rex Features/Shutterstock) 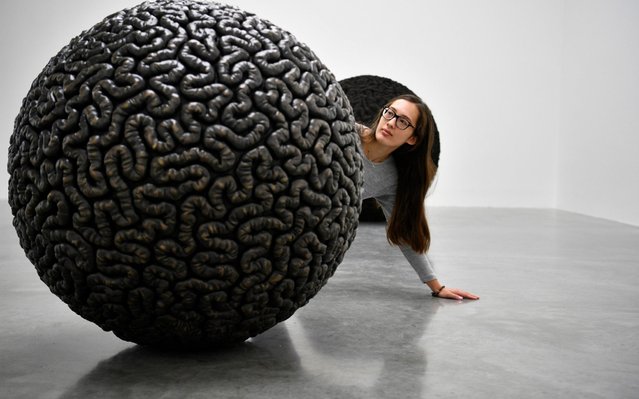 A gallery assistant poses with the artwork “Dark Matter” by Palestinian artist Mona Hatoum as part of a multi-artist show at the White Cube Bermondsey in Lon​don, Britain, 11 September 2019. The exhibition runs from 12 September to 03 November. (Photo by Neil Hall/EPA/EFE) 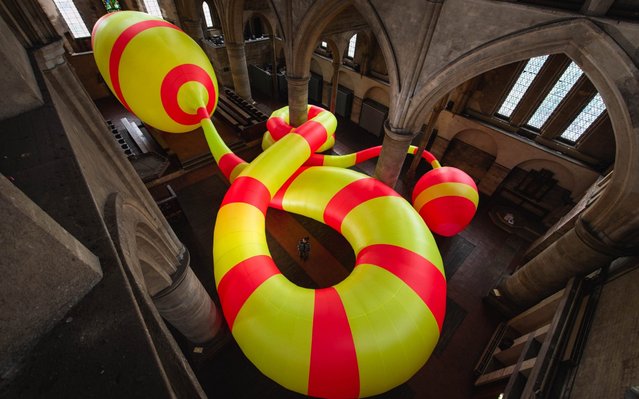 The huge inflatable sculpture INF23, by Michael Shaw, sits in the grade 2* listed former church of Left Bank Leeds, UK on September 1, 2019. At around 26m long, the piece could span nearly six buses, and uses around 600m of fabric. This stunning 26-metre long, neon-striped inflatable sculpture has been installed at a former church to encourage people to explore historic spaces. The four metre high sculpture, called INF23, is the work of London-based artist Michael Shaw, who has used around 600 metres of fabric to create it. (Photo by Alex Cousins/South West News Service)
Edit Del
24 Oct 2019 00:03:00, post received 0 comments
Publication archive:
←   →
Popular tags:
All tags
Last searches: