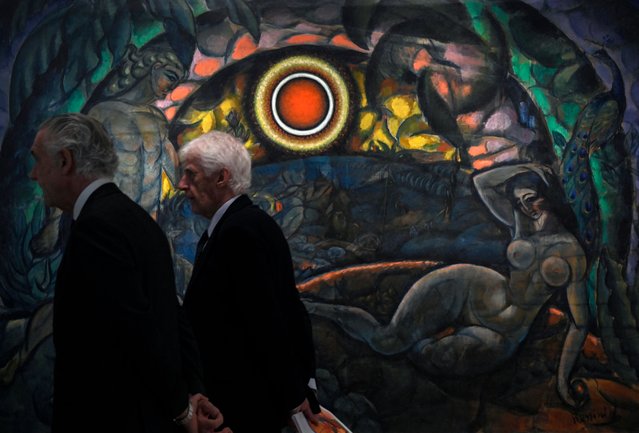 Members of the media walk past “Adam and Eve” by Wladimir Baranoff-Rossine during the press preview of “In the Eye of the Storm” an exhibition on Ukrainian avant-garde art in the first decades of the 20th century at the Thyssen-Bornemisza museum in Madrid on November 28, 2022. Some 70 modern artworks which were removed from Kyiv to protect them from Russian missile strikes that have done huge damage to Ukraine's cultural heritage will go on display 29 November at a Madrid museum. (Photo by Oscar Del Pozo/AFP Photo) 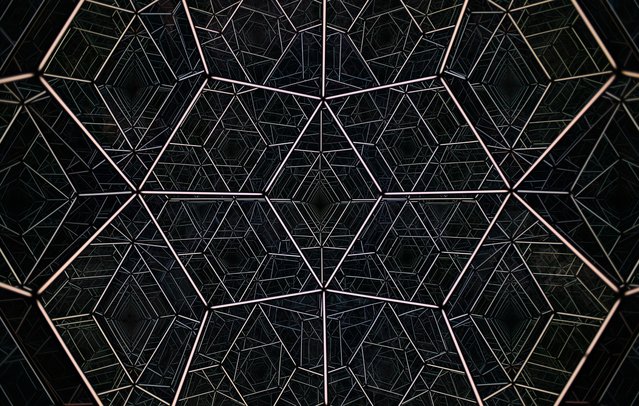 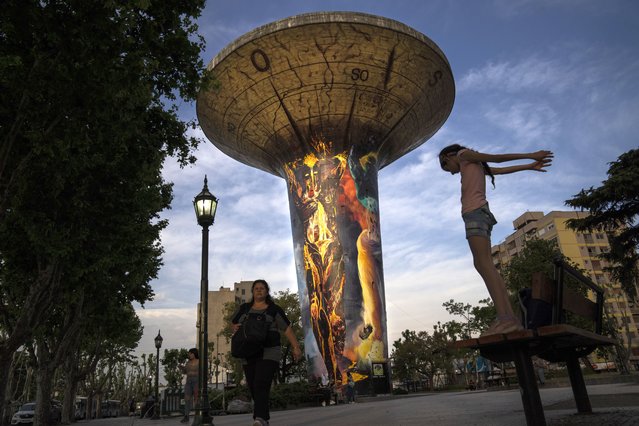 A water tank towers over the town's public square in Monte Grande, Argentina, Friday, October 28, 2022. The enormous water tank became a work of art in 2020 when, at the municipality's request, artist Leandro García Pimentel painted a mural on it depicting fire, earth, air and water. (Photo by Rodrigo Abd/AP Photo) A visitor looks up at the artwork “Gaia” created by British visual artist Luke Jerram on display at the Royal Palace's south vault in Stockholm on December 12, 2022. The “Gaia” globe measures seven meters in diameter and was created from images taken from NASA photographs of the Earth's surface. It is one of 22 works of art that illuminate Stockholm during light festival “Nobel Week Lights”. (Photo by Anders Wiklund/TT News Agency/AFP Photo) 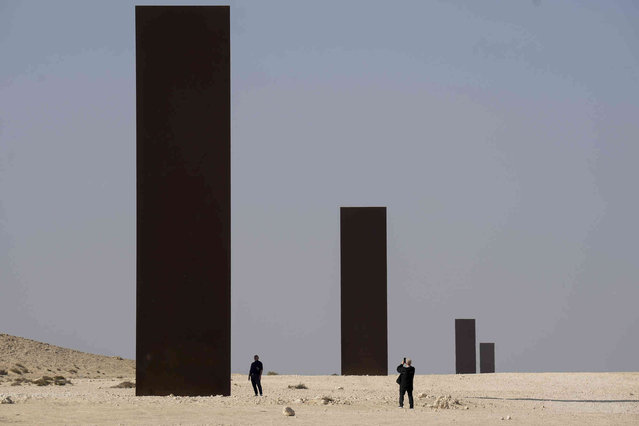 People view American artist Richard Serra's “East-West/West-East” art as it stands in a desolate section of the Brouq Nature Reserve in the northwestern part of the country's desert close to Zekreet, Qatar, Saturday, December 3, 2022. Four steel plates, each 14 meters high, span a one-kilometer stretch of the desert. (Photo by Nathan Denette/The Canadian Press via AP Photo) 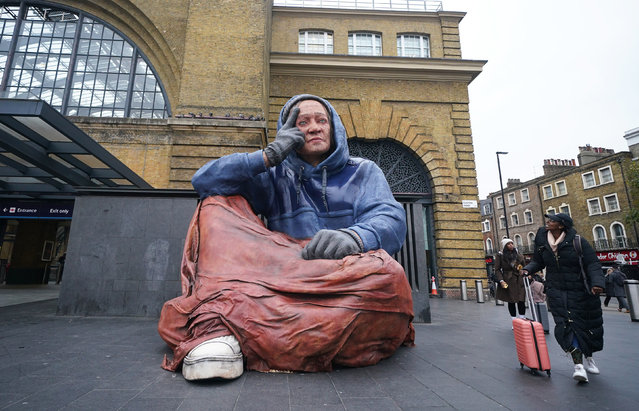 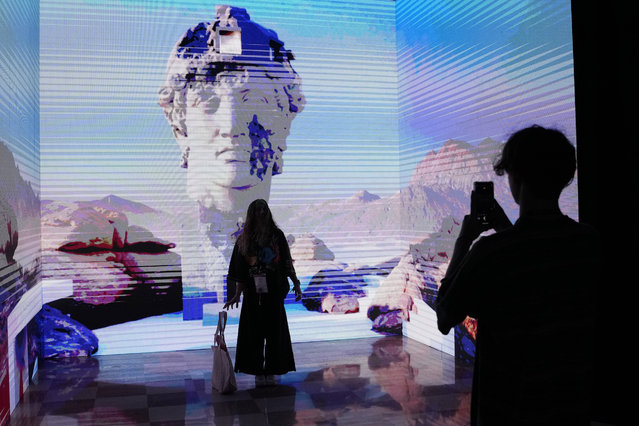 A woman poses for a photograph during a NFT event called The Gateway: A Web3 Metropolis during Miami Art Week, Wednesday, Nov. 30, 2022, in Miami. The NFT by artist Daniel Arsham titled Ares House, features a virtual home inside the Greek God Ares, designed for The Row. (Photo by Lynne Sladky/AP Photo) 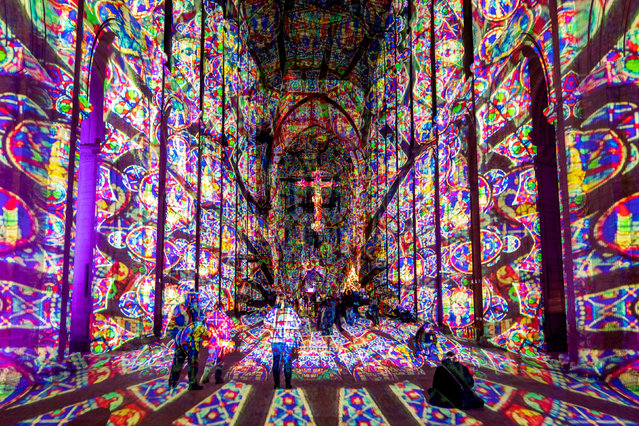 The first showing of The Beginning, a spectacular son-et-lumiere show by Luxmuralis, in the nave of Peterborough Cathedral, United Kingdom on Wednesday, November 23, 2022. (Photo by Joe Giddens/PA Images via Getty Images) 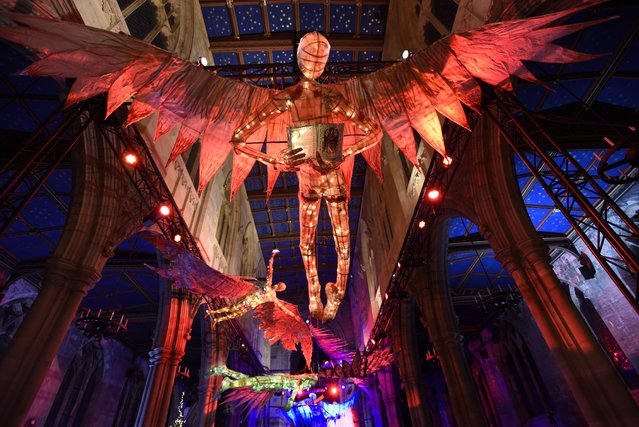 An illuminated model of the archangel Uriel hangs above the nave of St Mary’s Church in Beverley, East Yorkshire on December 10, 2022 alongside six other willow and tissue angels including Gabriel and Michael. The installation by Anne-Marie Kerr is the centrepiece of a Festival of Angels, which opened yesterday and continues until January 14. (Photo by Guzelian) 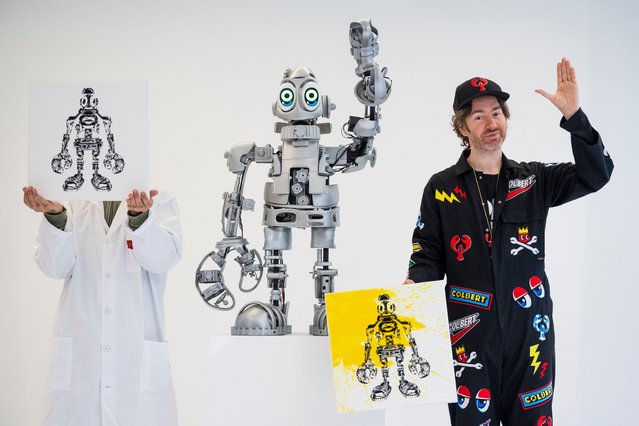 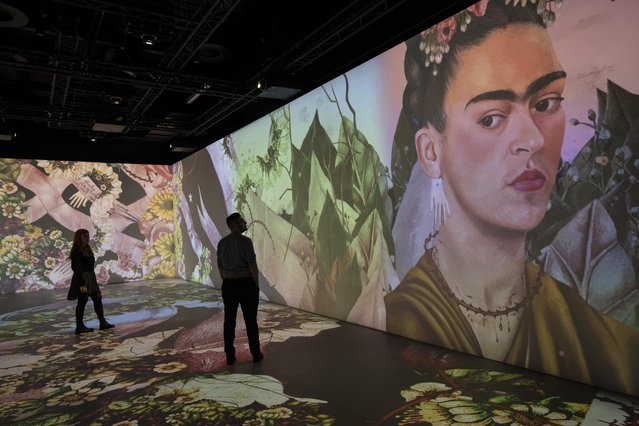 Preview of “Life And Work Of Frida Kahlo” Immersive Exhibition at The Reel Store on November 22, 2022 in Coventry, England. (Photo by Katja Ogrin/Getty Images) 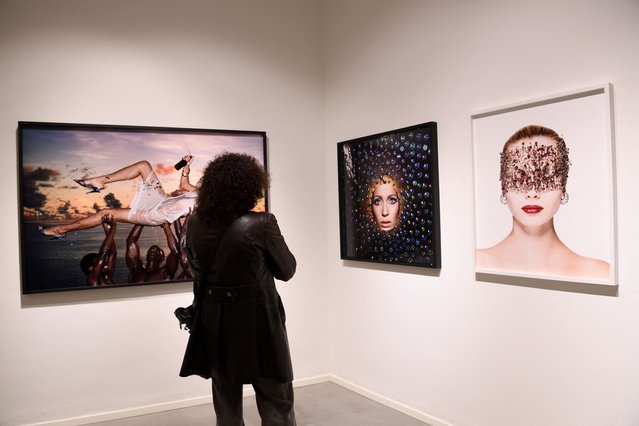 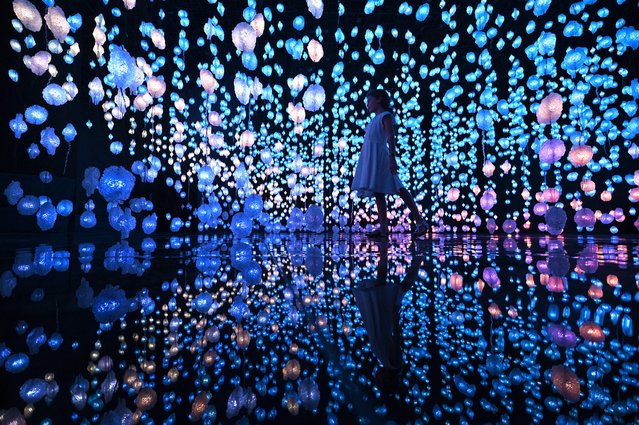 A girl attends the exhibition “Pipilotti Rist : Your Brain to Me, My Brain to You”, a new large-scale, site-specific installation by Swiss artist Pipilotti Rist at the National Museum of Qatar in Doha, on November 18, 2022, ahead of the Qatar 2022 World Cup football tournament. (Photo by Gabriel Bouys/AFP Photo) 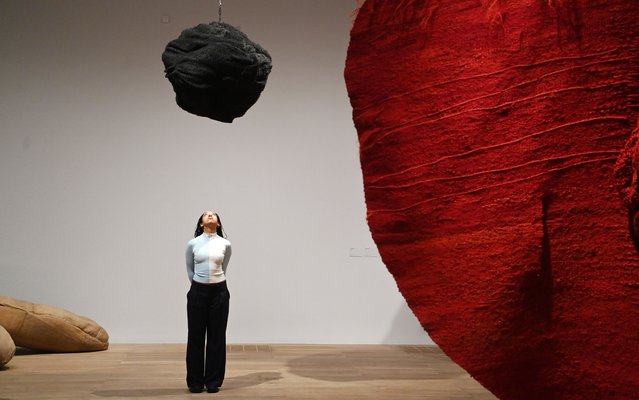 An exhibition staff member looks over artworks by Polish artist Magdalena Abakanowicz on display during a preview of the exhibition “Magdalena Abakanowicz: Every Tangle of Thread and Rope” at the Tate Modern in London, Britain, 15 November 2022. The large-scale Abakan sculptures have been brought together for the first time in the UK. The exhibit opens on 17 November 2022 and runs until 21 May 2023. (Photo by Andy Rain/EPA/EFE/Rex Features/Shutterstock) 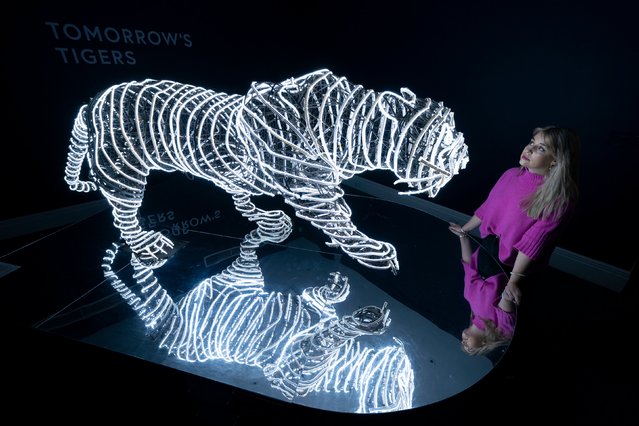 A gallery assistant on November 25, 2022 with Janu by Chila Kumari Singh Burman, £35,000, part of a collection of commissioned, limited edition art rugs and pieces by artists including Ai Weiwei, Peter Doig and Anish Kapoor during a preview of Sotheby's Tomorrow's Tigers exhibition and fundraising sale at Sotheby's in London. The exhibition is raising awareness and funds for the World Wildlife Fund. (Photo by Kirsty O'Connor/PA Images via Getty Images)
Edit Del
25 Jan 2023 03:47:00, post received 0 comments
Publication archive:
←   →
Popular tags:
All tags
Last searches: