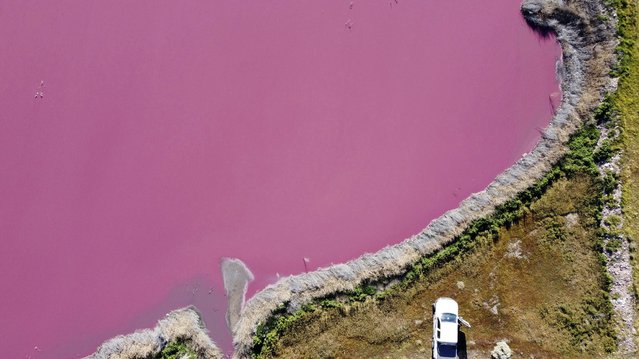 Aerial view of Corfo lagoon that has turned a striking shade of pink as a result of what local environmentalists are attributing to increased pollution from a nearby industrial park, in Trelew, Chubut province, Argentina, Thursday July 29, 2021. (Photo by Daniel Feldman/AP Photo) 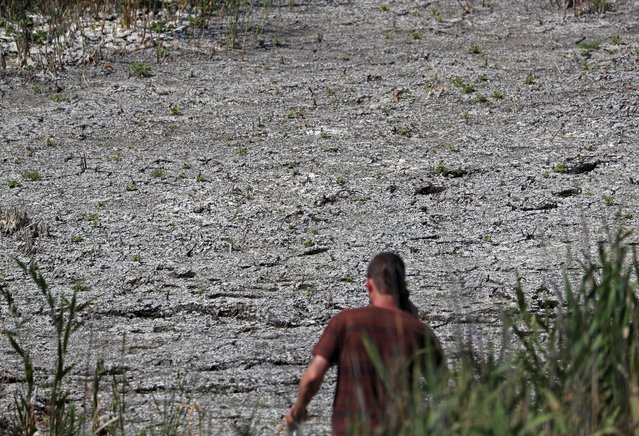 A man walks the dried up part of Lake Velence in Agard, Hungary, Sunday, August 8, 2021. Activists and environmental experts in Hungary say the effects of climate change and insufficient infrastructure are colliding to threaten the country’s third largest natural lake with an economic and ecological crisis. Lake Velence has lost nearly half of its water in the last two years as hot, dry summers have led to increased evaporation and deteriorating water quality. (Photo by Laszlo Balogh/AP Photo) 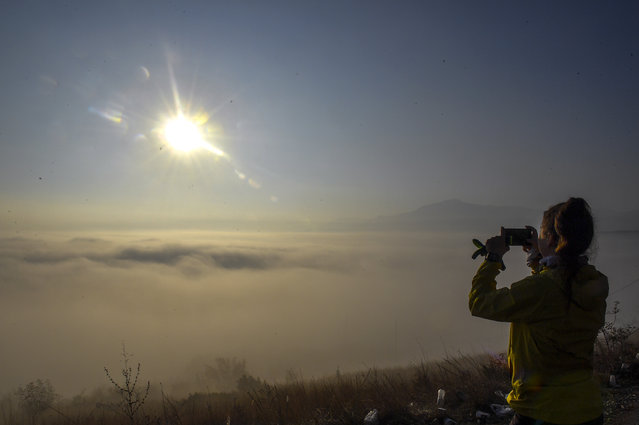 A girl takes a picture of Skopje's valley, covered by fog and pollution in Skopje, Republic of North Macedonia, 12 November 2020. One month after the start of the heating season, fog, smog and pollution returned to the capital of Northern Macedonia and put it on the list of the most polluted city in the world. Poor air quality, combined with the record number of newly infected people with COVID-19 (1321 infected and 26 death people in last 24 hours), complicates the health situation in the country. (Photo by Georgi Licovski/EPA/EFE) 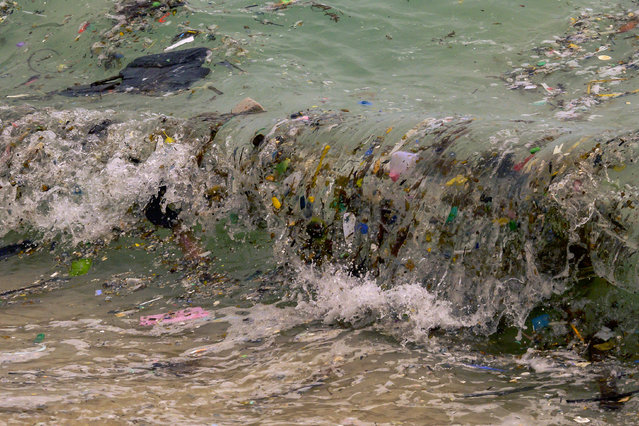 A wave carrying plastic waste and other rubbish washes up on a beach in Koh Samui in the Gulf of Thailand on January 19, 2021. (Photo by Mladen Antonov/AFP Photo) 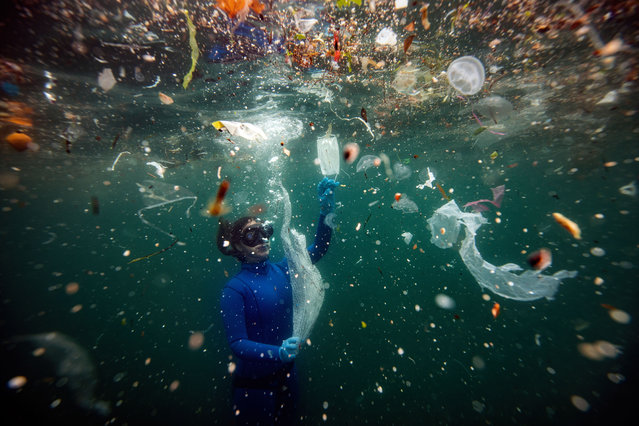 Turkish world record-holder free-diver and divers of the Underwater Federation Sahika Encumen dives amid plastic waste in Ortakoy coastline to observe the life and pollution of Bosphorus in Istanbul, Turkey on June 27, 2020. Sahika Encumen, announced as “Life Below Water Advocate” by United Nations Development Program (UNDP) Turkey, this time dives in to raise awareness on plastic pollution. (Photo by Sebnem Coskun/Anadolu Agency via Getty Images) 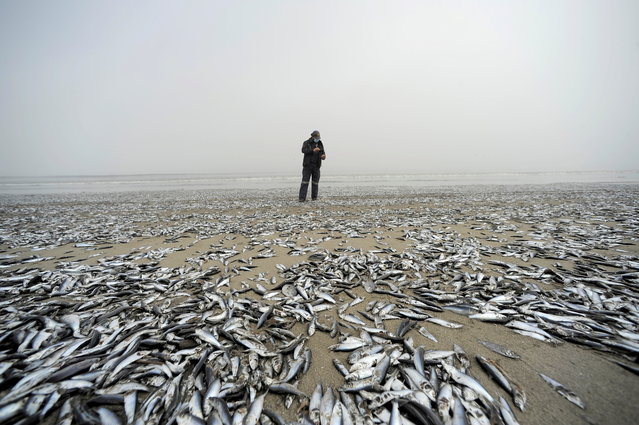 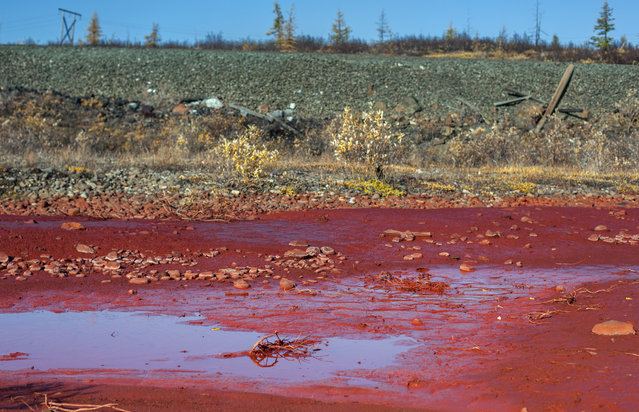 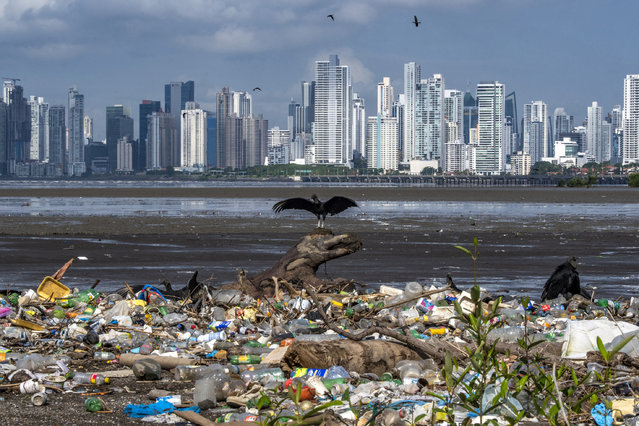 Vultures are seen over garbage, including plastic waste, at the beach of the Costa del Este neighborhood in Panama City, on June 08, 2020, during the World Oceans Day. Every year 6.4 million tons of waste end up in the sea, of which between 60% and 80% are plastics. (Photo by Luis Acosta/AFP Photo) 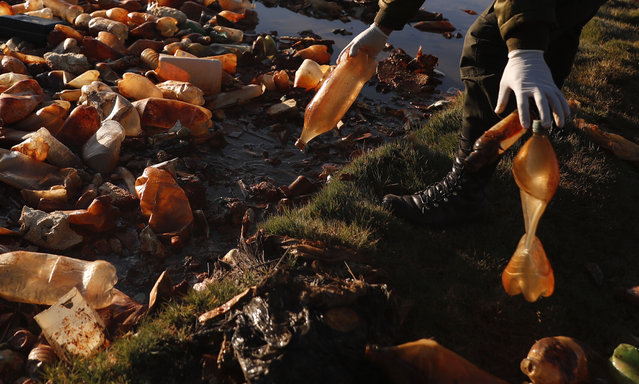 A police officer removes discarded plastic bottles from the polluted Tagaret River which flows into the Uru Uru Lake, near Oruro, Bolivia, Wednesday, April 7, 2021. A cleanup operation began Wednesday in an effort to restore the lake to its natural beauty which has been overrun by plastic rubbish and other man-made waste. (Photo by Juan Karita/AP Photo) 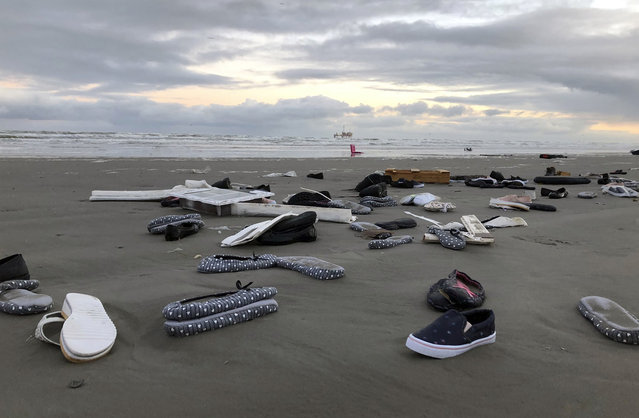 Contents from shipping containers washed up on a beach in Ameland, Netherlands, Thursday January 3, 2019. Authorities in Germany and the Netherlands are searching for up to 270 shipping containers lost at sea by a cargo ship caught in a storm, saying some are carrying hazardous materials. The Dutch Safety Board watchdog said Thursday June 25, 2020, that large container ships should avoid sailing through a sensitive, shallow sea off the coast of the Netherlands, Germany and Denmark in heavy northwesterly storms to reduce the risk of losing their cargo. (Photo by Lars Brouwer via AP Photo) 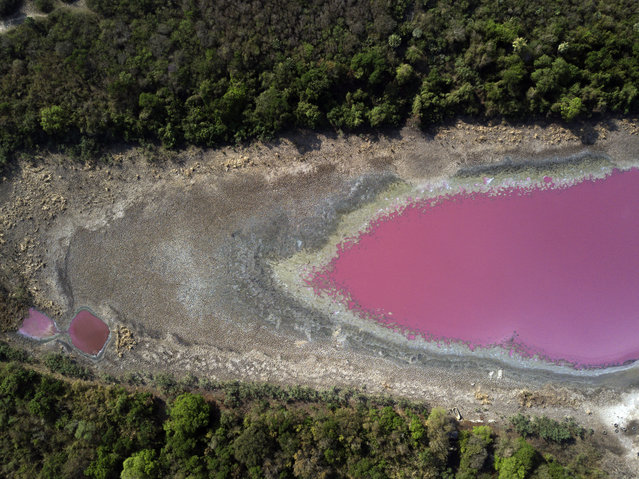 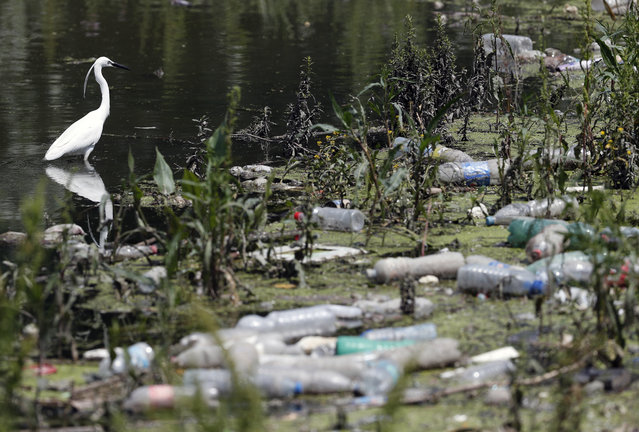 A white heron stands between dumped plastic bottles and waste on the bank of the river Sava on World Environment Day, in Belgrade, Serbia, Friday, June 5, 2020. (Photo by Darko Vojinovic/AP Photo) 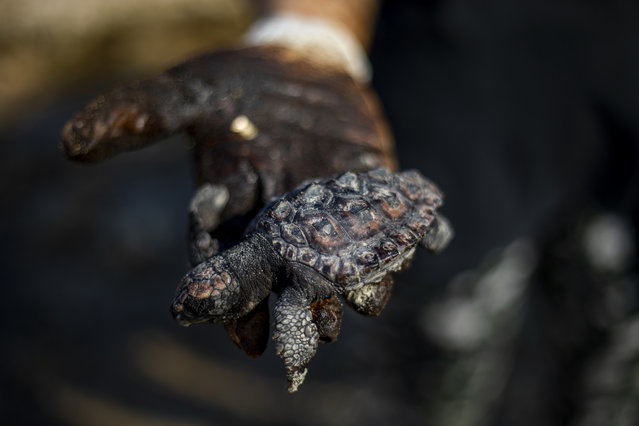 A woman holds a dead sea turtle covered in tar from an oil spill in the Mediterranean Sea in Gador nature reserve near Hadera, Israel, Saturday, February 20, 2021. Hundreds of volunteers are taking part in a cleanup operation of Israeli shoreline as investigations are underway to determine the cause of an oil spill that threatens the beach and wildlife, at Gador Nature Reserve near the northern city of Hadera, the tar smeared fish, turtles, and other sea creatures. (Photo by Ariel Schalit/AP Photo) 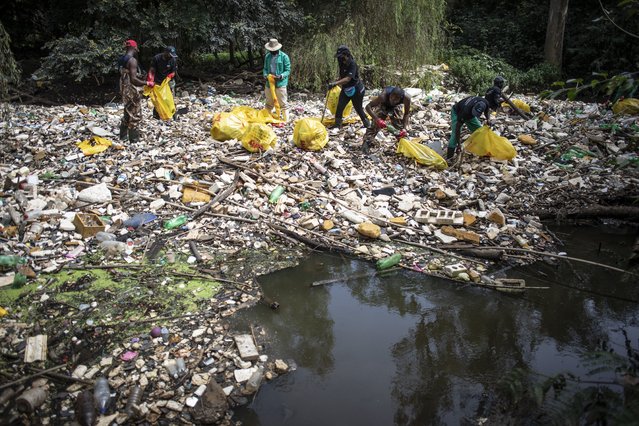 Volunteers wear protective equipment and masks on a floating island of trash in the middle of a river as they help to clean up the Hennops River of trash in Pretoria, South Africa, 15 February 2021. The floating island is called 'Polly Island' as it is made up almost entirely by floating polystyrene. The river clean up is part of the ongoing work by NPO Hennops Revival which cleans the area at the Hennops River of trash. Once the trash is removed from the river parts of it are recycled while those parts of it that are not recyclable are taken to the dump. (Photo by Kim Ludbrook/EPA/EFE) 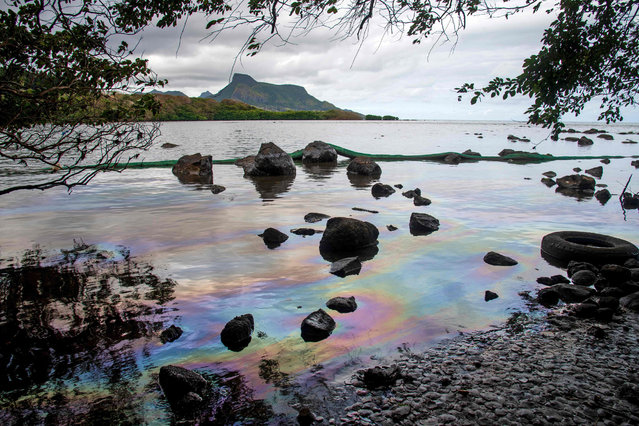 A picture taken on August 15, 2020 shows iridescence on the water at the beach in Petit Bel Air, due to the oil leaked from vessel MV Wakashio, belonging to a Japanese company but Panamanian-flagged, that ran aground near Blue Bay Marine Park off the coast of south-east Mauritius. A fresh streak of oil spilled on August 14, 2020, from a ship stranded on a reef in pristine waters off Mauritius, threatening further ecological devastation as demands mount for answers as to why the vessel had come so close to shore. (Photo by Fabien Dubessay/AFP Photo)
Edit Del
20 Aug 2021 08:32:00, post received 0 comments
Publication archive:
←   →
Popular tags:
All tags
Last searches: