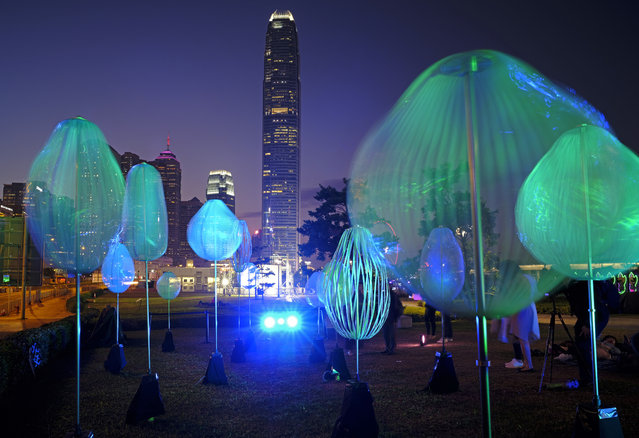 In this Saturday, December 1, 2018, file photo, an installation for the Hong Kong Pulse Light Festival is lit up against the Central business center in Hong Kong. (Photo by Vincent Yu/AP Photo) 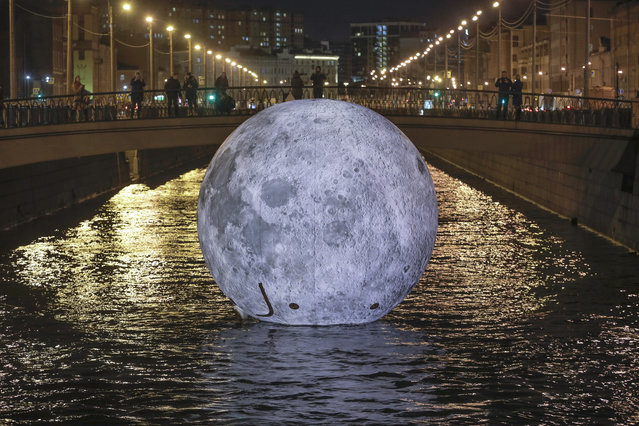 People look at a giant floating ball depicting the moon's surface, an installation for the “Festival of Lights”, in the water of Obvodny channel in St. Petersburg, Rusia, Saturday, November 3, 2018. (Photo by Dmitri Lovetsky/AP Photo) 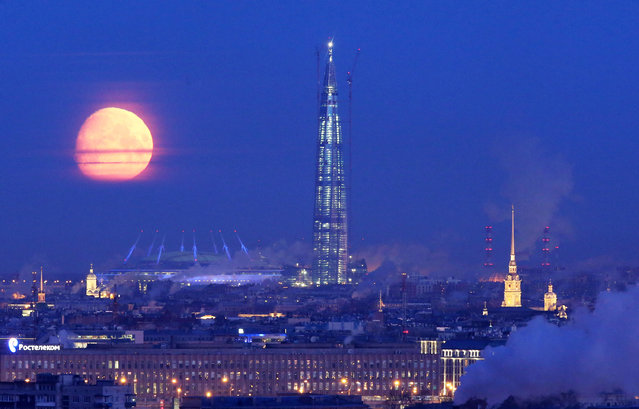 A view of Saint Petersburg Stadium and the Lakhta Center multifunctional complex under construction in St Petersburg, Russia on March 28, 2018. (Photo by Peter Kovalev/TASS) 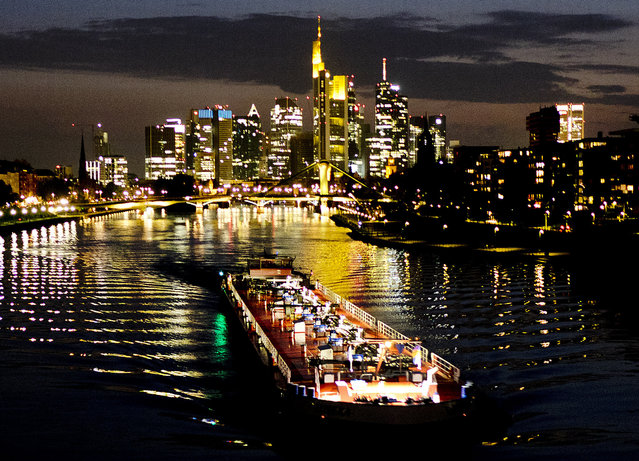 A cargo barge is seen on the river Main with bank buildings in background in Frankfurt, Germany on April 15, 2019. (Photo by Michael Probst/AP Photo) 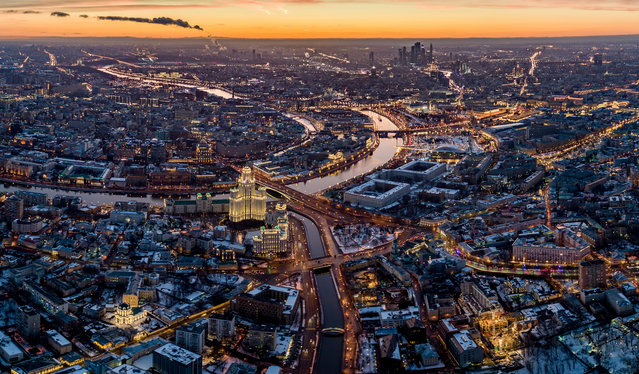 An aerial view of the Yauza River (front) and the Kotelnicheskaya Embankment Building (C) at sunset in Moscow, Russia on February 16, 2019. (Photo by Dmitry Serebryakov/TASS) 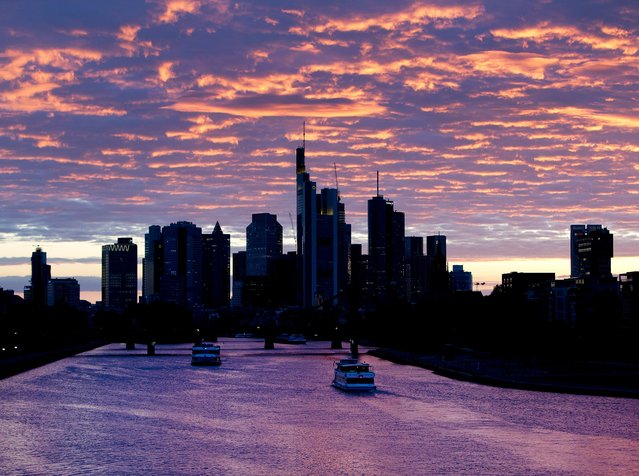 Ships pass by on the river Main after the sun set in Frankfurt, Germany, Wednesday, May 15, 2019. (Photo by Michael Probst/AP Photo) 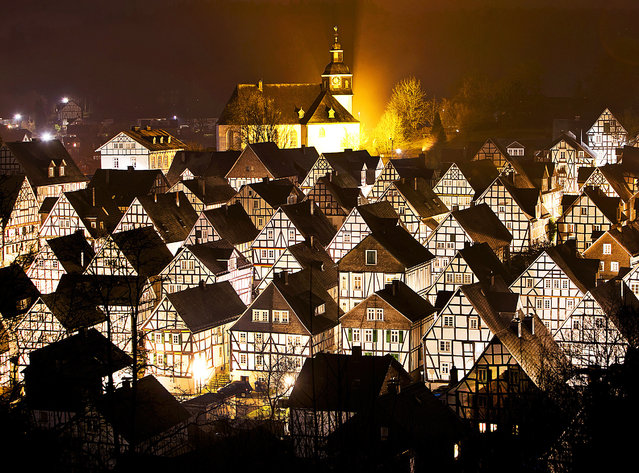 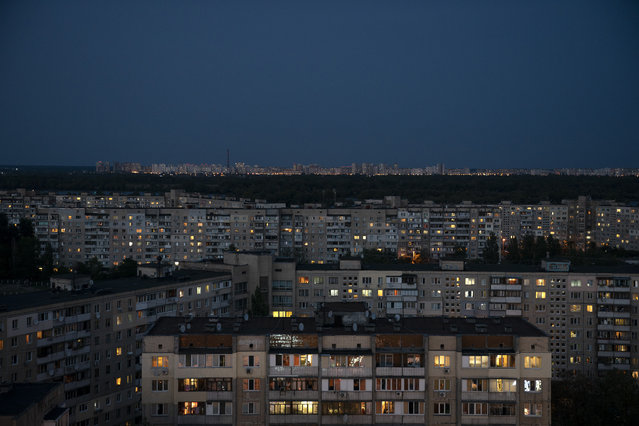 In this August 21, 2018 photo, buildings are illuminated at dusk In Kiev, Ukraine. (Photo by Felipe Dana/AP Photo) 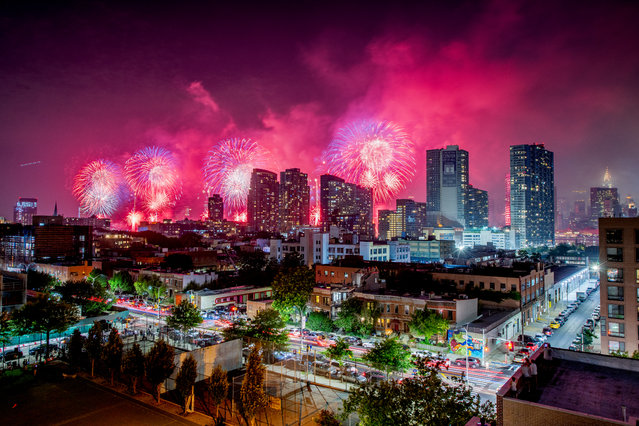 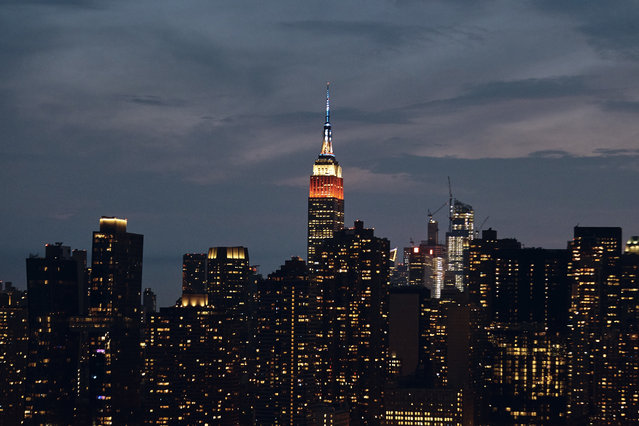 The top of the Empire State Building is lit in red, white and blue before the Fourth of July fireworks show, Wednesday, July 4, 2018, in New York. (Photo by Andres Kudacki/AP Photo) 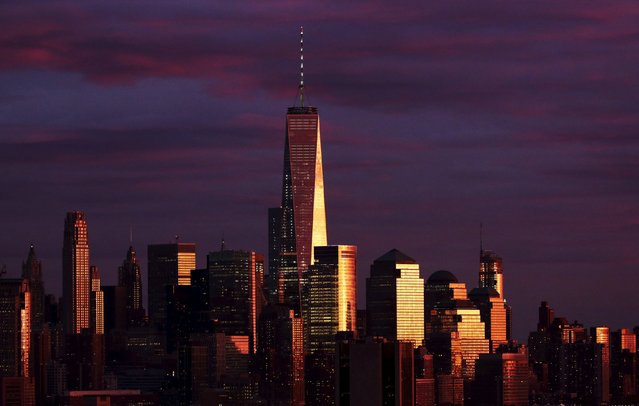 The setting sun reflects off of One World Trade Center and surrounding buildings at sunset in the Manhattan borough of New York City, November 22, 2015. (Photo by Rickey Rogers/Reuters) 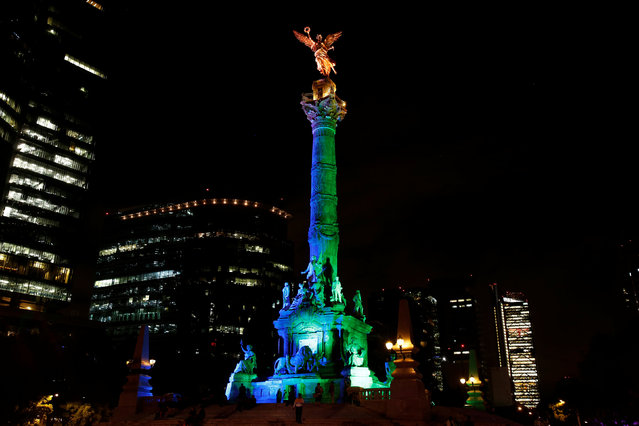 The “Angel de la Independencia” monument is seen lit in the colours of Brazil's flag in homage to 2016 Rio Olympics, in Mexico City, Mexico, August 4, 2016. (Photo by Ginnette Riquelme/Reuters) 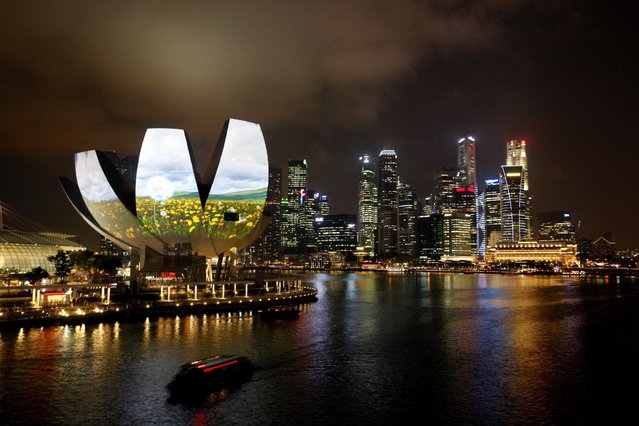 Garden of Light, an animation by Hexogon Solution of Singapore, is projected on the ArtScience Museum during a media preview of the i Light Marina Bay sustainable light art festival in Singapore March 7, 2012. (Photo by Edgar Su/Reuters) 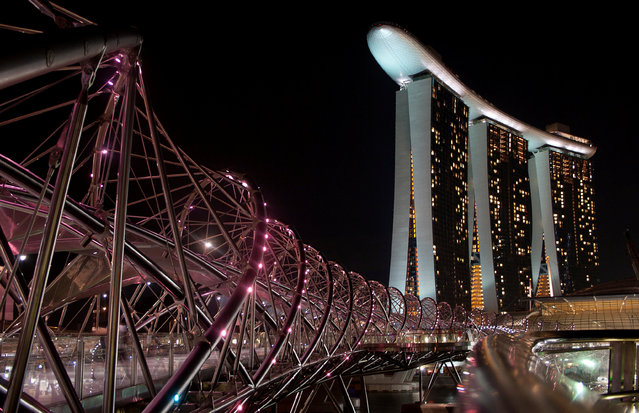 The Helix Bridge (L) is pictured with the Marina Bay Sands resort in the background in Singapore November 1, 2010. (Photo by Alywin Chew/Reuters) 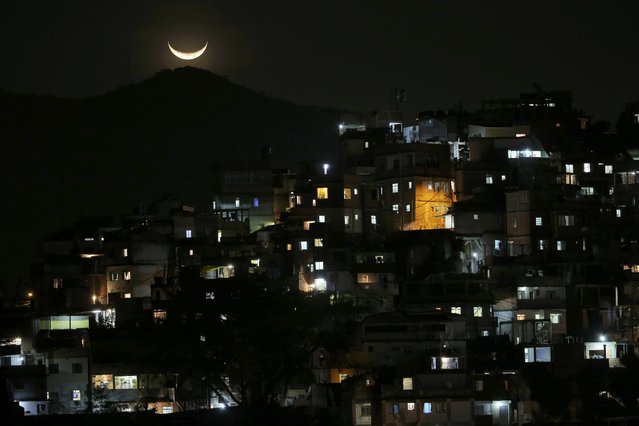 The moon is seen over a slum near Copacabana Beach in Rio de Janeiro, Brazil, August 6, 2016. (Photo by Carlos Barria/Reuters) 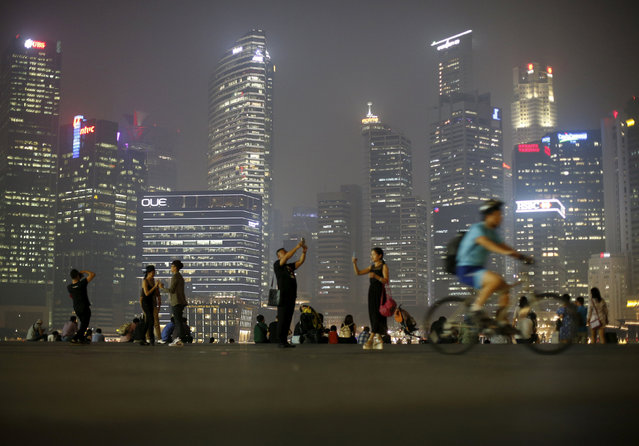 People take photos with the skyline of the central business district in Singapore on September 10, 2015. (Photo by Edgar Su/Reuters) 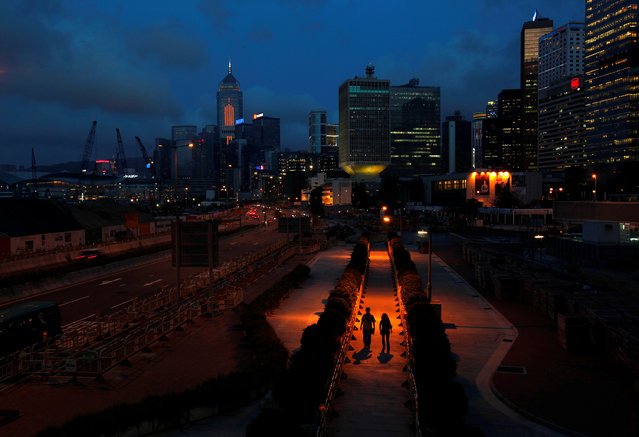 People walk on a pavement at Hong Kong's financial Central district during sunset May 11, 2011. (Photo by Bobby Yip/Reuters) 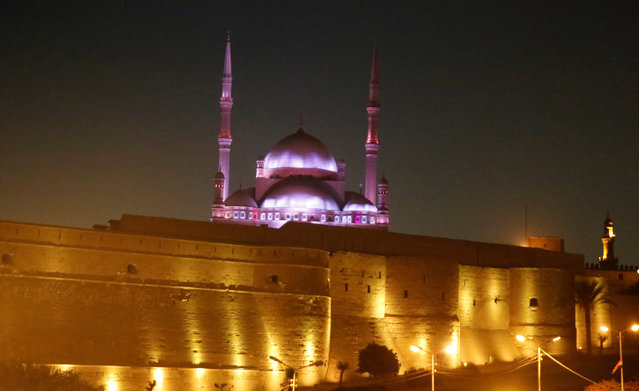 Light and decoration are seen at the Saladin Citadel during the opening of 25th Citadel Festival for Music and Singing which is organized by the Cairo Opera House with the participation of artists from different Arab countries in Cairo, Egypt August 18, 2016. (Photo by Amr Abdallah Dalsh/Reuters) 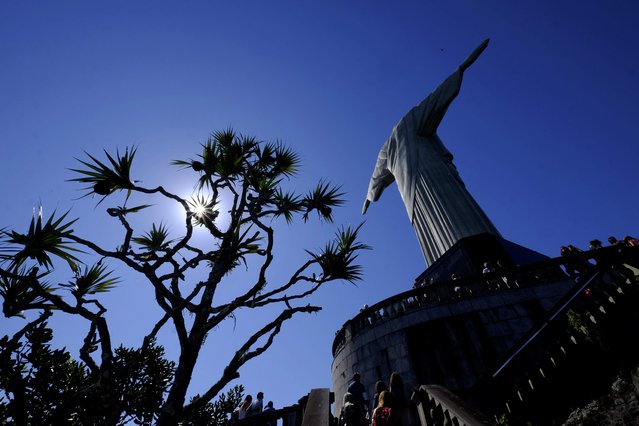 The sun shines over the Christ the Redeemer statue before the start of the Rio 2016 Olympics in Rio de Janeiro, July 24, 2016. (Photo by Paul Robinson/Reuters) 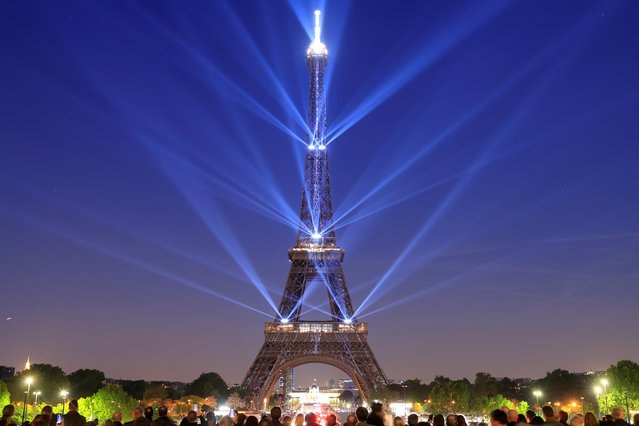