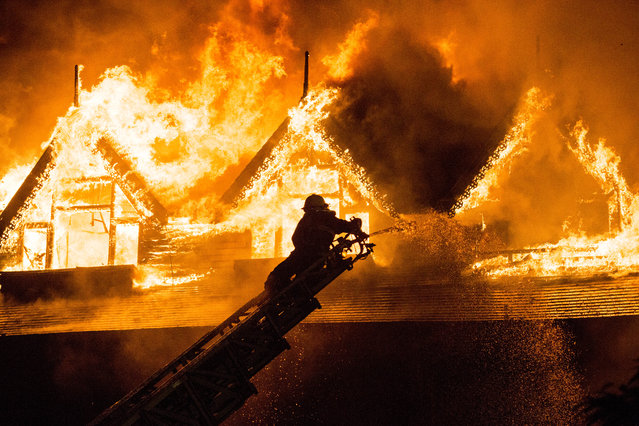 A firefighter extinguishes a fire at Kandawgyi Palace hotel in Yangon early on October 19, 2017. One person died in a pre-dawn blaze on October 19 that tore through a teakwood hotel in Yangon popular with foreign visitors to Myanmar's main city. (Photo by Ye Aung Thu/AFP Photo) 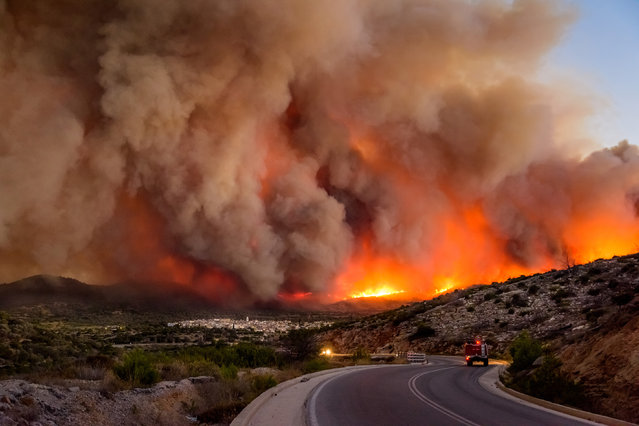 A picture made available on 26 July 2016 shows dense smoke over Lithi village during a wildfire on Chios island, Greece, 25 July 2016. The huge wildfire that broke out early 25 July 2016, on the island of Chios which has burned 3,500 hectares of forest and farm land, set under control. Over 90 percent of the mastic trees at the villages of Lithi, Elata and Vessa were destroyed while a large number of mastic trees were burned at the villages of Mesta, Armolia and Pyrgi. (Photo by Kostas Koyrgias/EPA) Acrobatic pilots perform at the Australian International Airshow at the Avalon Airfield in the city of Lara, southwest of Melbourne on February 24, 2015. Some 180,000 patrons were expected through the gates over the duration of the event. (Photo by Paul Crock/AFP Photo) 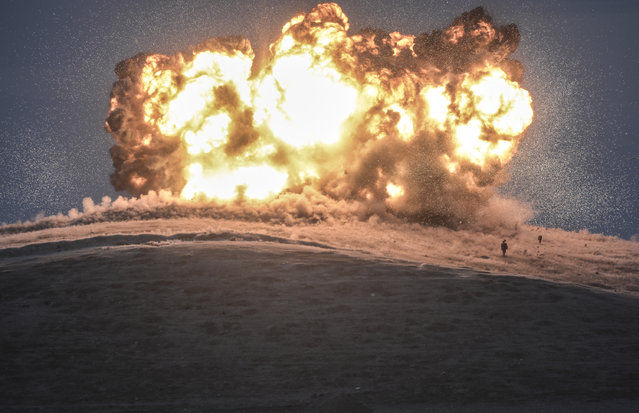 Militants of Islamic State (IS) stand just before explosion of an air strike on Tilsehir hill near Turkish border on October 23, 2014, at Yumurtalik village, in Sanliurfa province. Turkish President Recep Tayyip Erdogan that 200 Iraqi Kurd peshmerga fighters would travel through Turkey to the flashpoint Syrian border town of Kobane under assault by the Islamic State group. (Photo by Bulent Kilic/AFP Photo) A truck burns as fire ravages the Napa wine region in California on October 9, 2017, as multiple wind-driven fires continue to whip through the region. (Photo by Josh Edelson/AFP Photo) 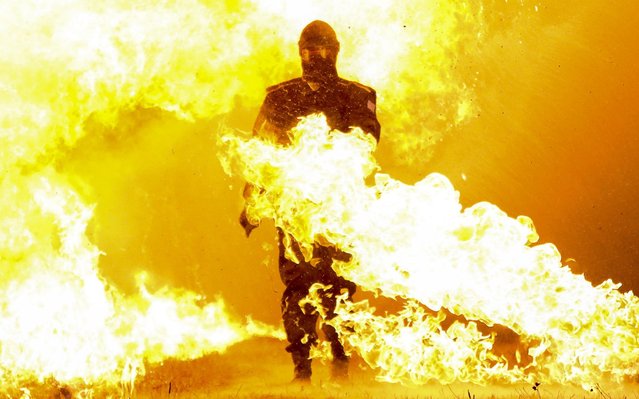 Stunt performer Viktoria Kolesnikova takes part in endurance testing of a new army watch, designed by Russia's Rostec Corporation, at the range of TsNIITochMash (the Central Scientific and Research Institute for Precision Machine Engineering, Rostec's subsidiary) on October 31, 2017. The watch is resistant to high impact, electromagnetic effect, electronic warfare actions, and consequences of a nuclear blast. The watch is to be included in the Ratnik combat gear for Russia's ground, airborne, coastal defence troops, and other forces. (Photo by Anton Novoderezhkin/TASS via Getty Images) 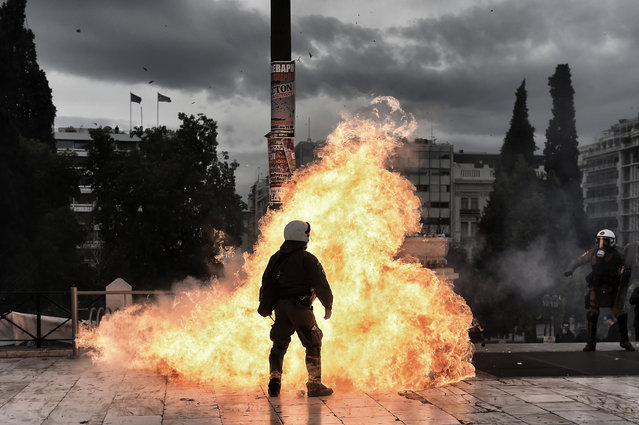 A firebomb explodes beside a riot police member during a massive protest on February 4, 2016. Thousands of people marched across Greece on February 4, 2016 as diverse classes united in a crippling general strike over a pension overhaul that has sparked a major backlash against embattled leftist Prime Minister Alexis Tsipras. (Photo by Aris Messinis/AFP Photo) 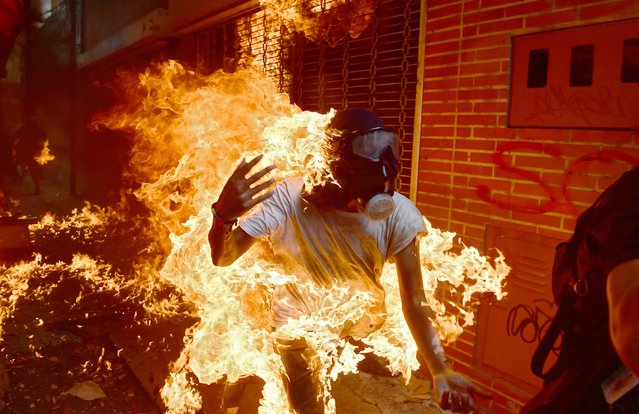 A demonstrator catches fire during clashes with riot police within a protest against Venezuelan President Nicolas Maduro, in Caracas on May 3, 2017. Venezuela's angry opposition rallied Wednesday vowing huge street protests against President Nicolas Maduro's plan to rewrite the constitution and accusing him of dodging elections to cling to power despite deadly unrest. (Photo by Ronaldo Schemidt/AFP Photo) 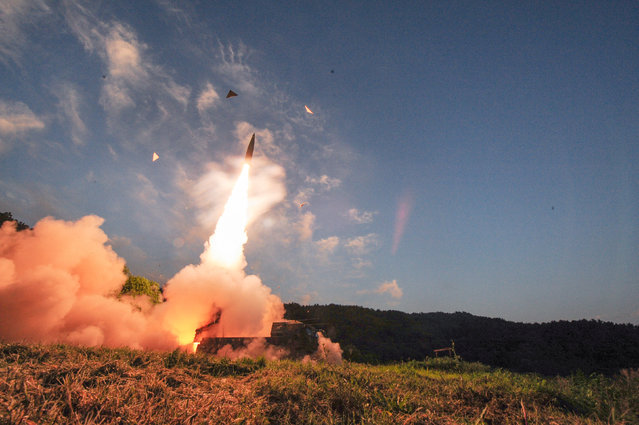 South Korean troops fire Hyunmoo Missile into the waters of the East Sea at a military exercise in South Korea September 4, 2017. (Photo by /Reuters/Yonhap/Defense Ministry) 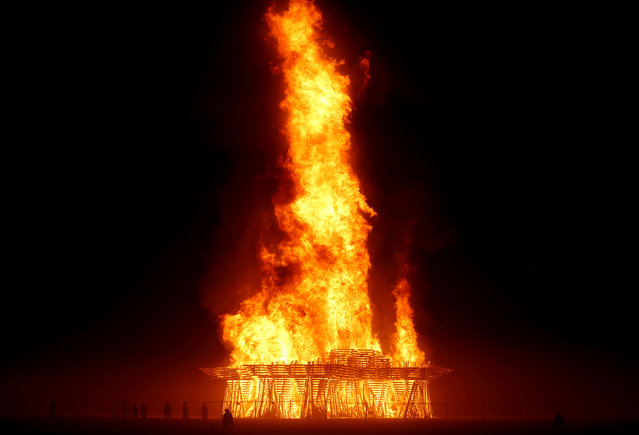 The Temple burns as approximately 70,000 people from all over the world gathered for the annual Burning Man arts and music festival in the Black Rock Desert of Nevada, U.S. September 3, 2017. (Photo by Jim Bourg/Reuters) A worker monitors a process inside the plant at the copper refinery of Codelco Ventanas in Ventanas city, Chile January 7, 2015. (Photo by Rodrigo Garrido/Reuters) 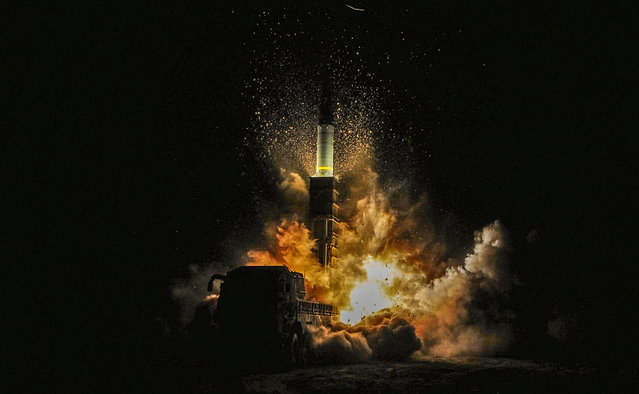 South Korea's Hyunmoo II missile is fired during an exercise at an undefined location in the east coast of South Korea on November 29, 2017. (Photo by Reuters/Yonhap) 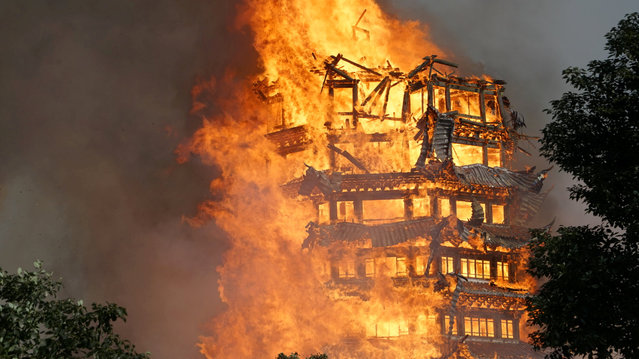 A temple under construction is seen engulfed in fire in Mianzhu, Sichuan province, China December 10, 2017. (Photo by Reuters/China Stringer Network) View of the devastation caused by a forest fire in front of Brasilia's National Park, in Brasilia, Brazil, September 19, 2017. (Photo by Ueslei Marcelino/Reuters) 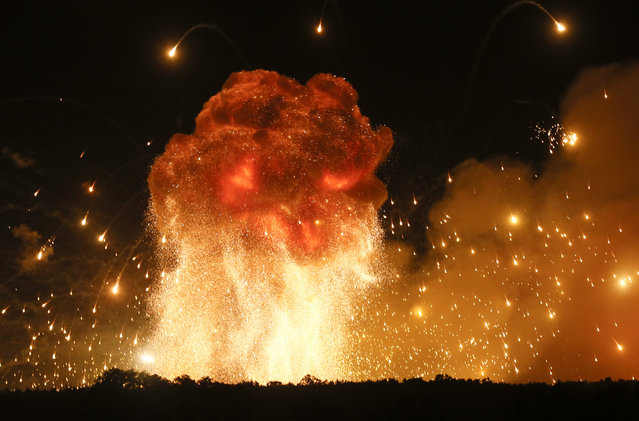 A powerful explosion is seen in the ammunition depot at a military base in Kalynivka, west of Kiev, Ukraine, early Wednesday, September 27, 2017. Ukrainian officials say they have evacuated more than 30,000 people after a fire and ammunition explosions, at the military base. (Photo by Efrem Lukatsky/AP Photo) 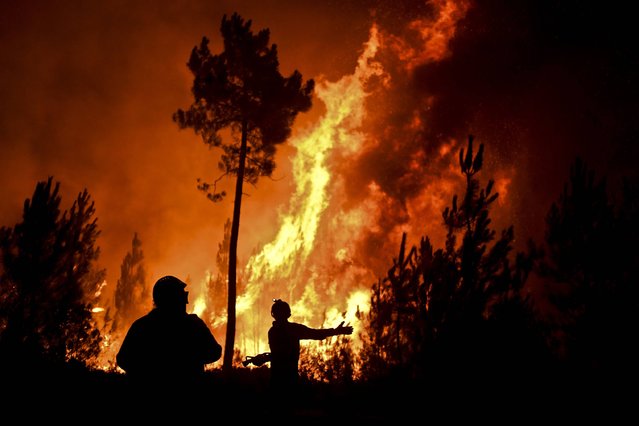 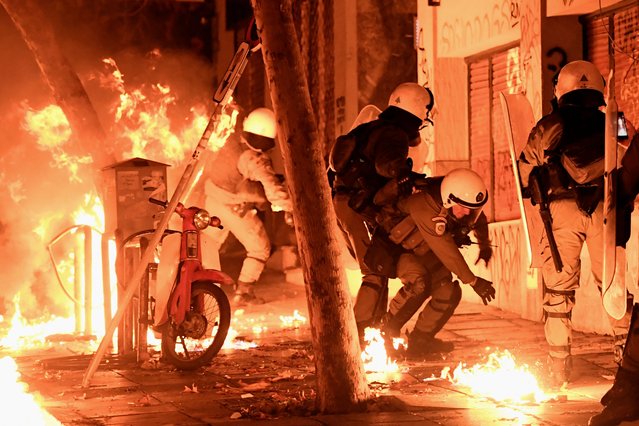 A petrol bomb explodes next to anti-riot policemen in downtown Athens on November 17, 2017, during clashes following a rally commemorating the 1973 students uprising against the US-backed military junta. Thousands marched in Greece on November 17, amid tight security, to commemorate a student uprising that helped bring down a US-backed junta in 1974. (Photo by Aris Messinis/AFP Photo) 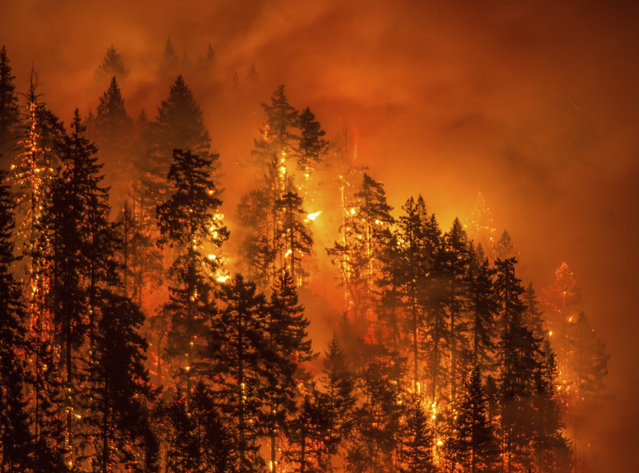 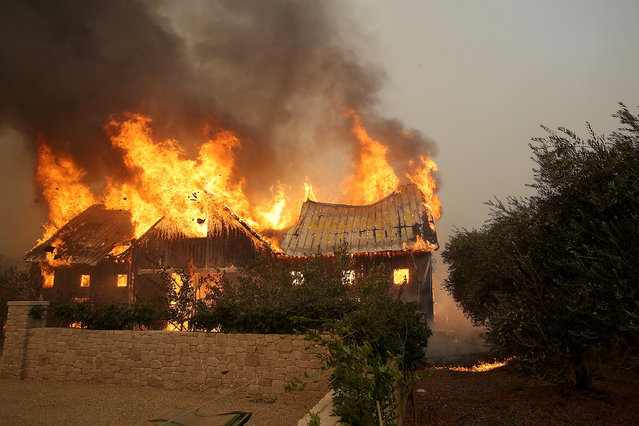 Fire consumes a barn as an out of control wildfire moves through the area on October 9, 2017 in Glen Ellen, California. Tens of thousands of acres and dozens of homes and businesses have burned in widespread wildfires that are burning in Napa and Sonoma counties. (Photo by Justin Sullivan/Getty Images) 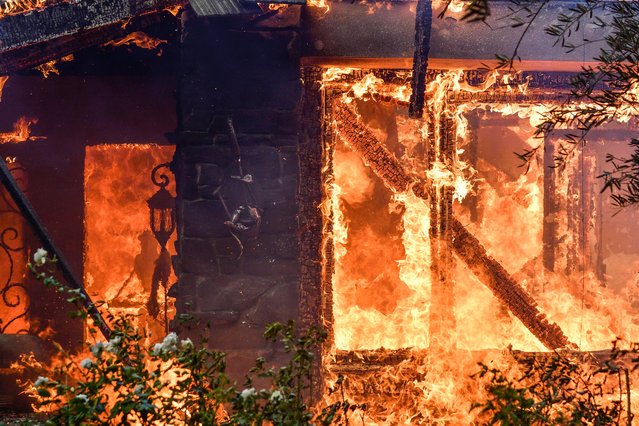