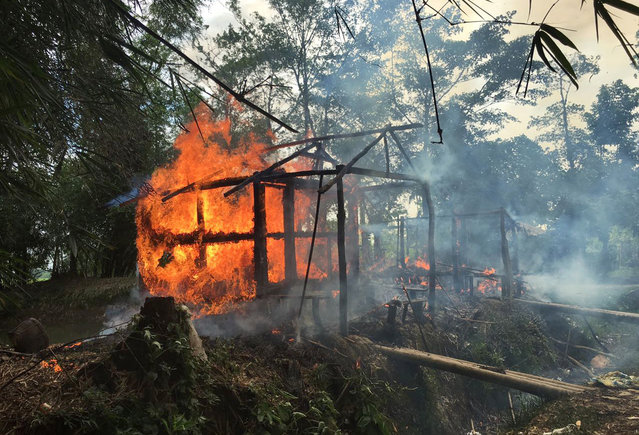 In this September 7, 2017, file photo, houses are on fire in Gawdu Zara village, northern Rakhine state, Myanmar. Two soldiers who defected from Myanmar’s army and confessed on video to taking part in massacres, rape, and other crimes against the Muslim Rohingya minority are believed to be in the custody of the International Criminal Court in the Netherlands and should be prosecuted to obtain their evidence, a human rights organization said Tuesday. (Photo by AP Photo/File) 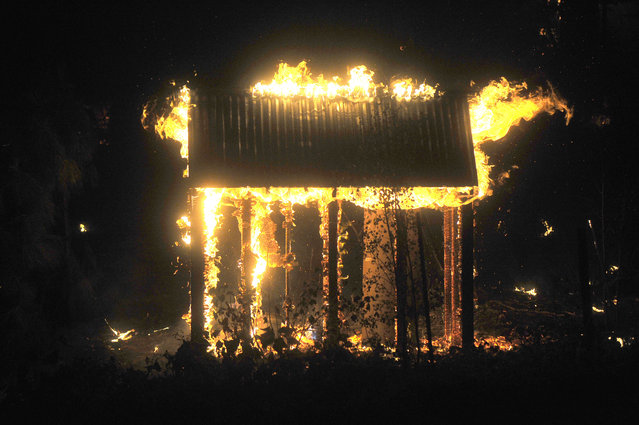 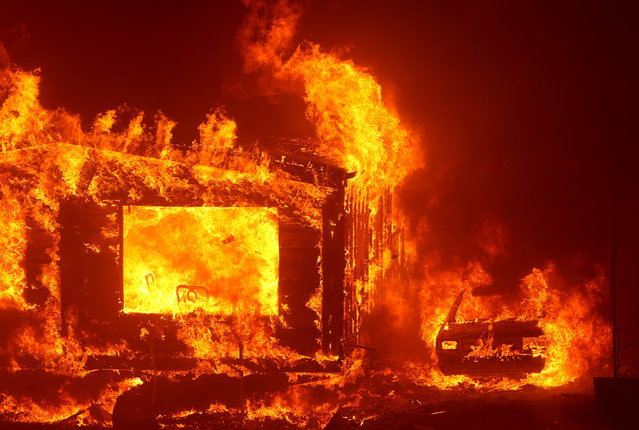 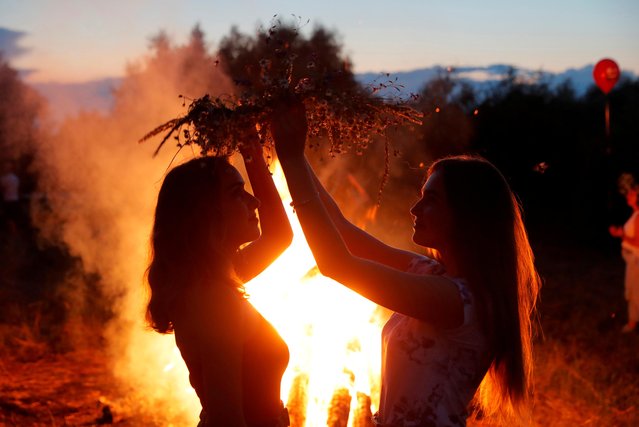 Women take part in the Ivan Kupala festival in the town of Turov, Belarus, July 6, 2020. The ancient tradition, originating from pagan times, is usually marked with grand overnight festivities – people sing and dance around campfires, believing it will purge them of their sins and make them healthier. (Photo by Vasily Fedosenko/Reuters) 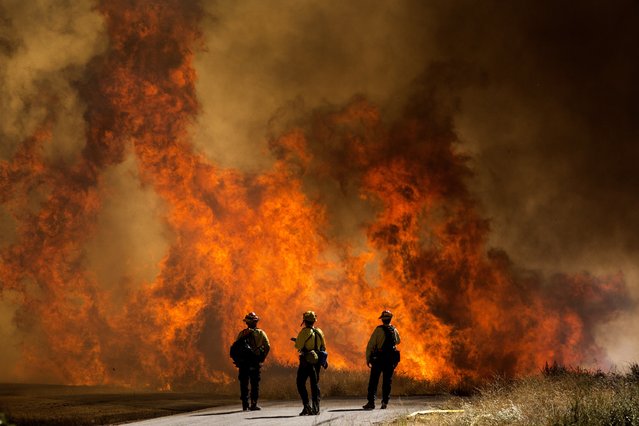 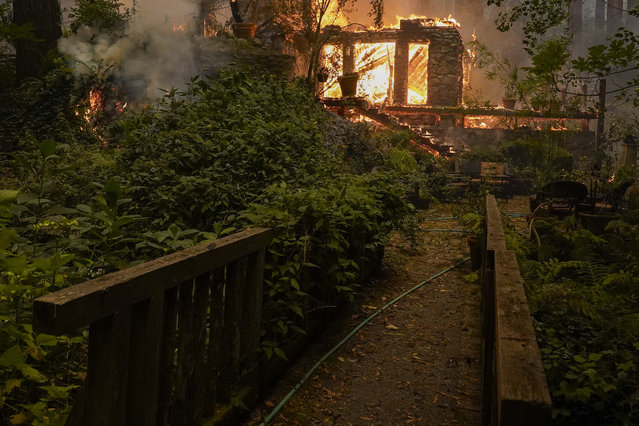 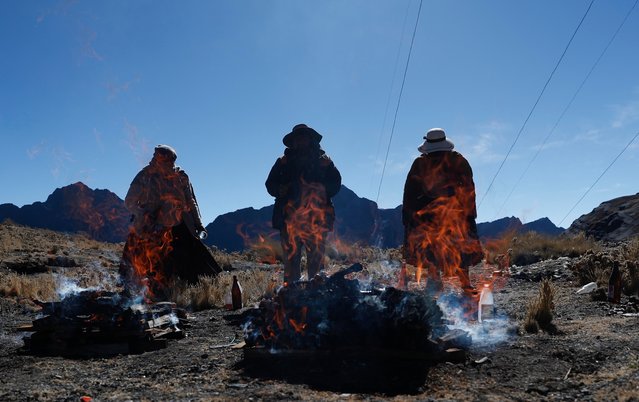 People burn offerings in honor of “Pachamama” or Mother Earth, on La Cumbre, a mountain considered sacred on the outskirts of La Paz, Bolivia, Saturday, August 1, 2020. According to lore, the Pachamama awakens hungry and thirsty every August after the dry season, and to satiate her, devotees toss offerings including fruit, coca, sweets and dead llama fetuses into a bonfire. (Photo by Juan Karita/AP Photo) 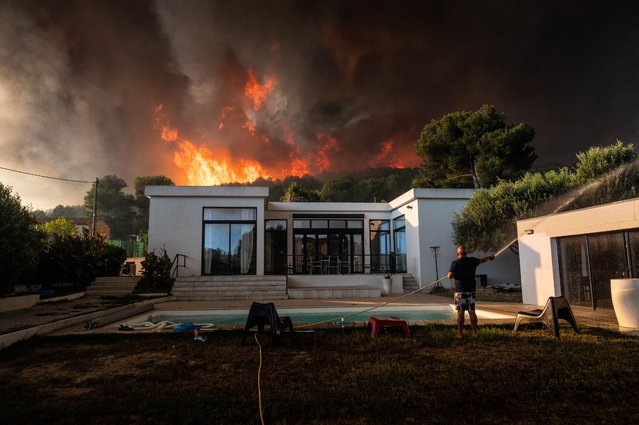 A man uses a garden hose to drench his house before being evacuated as a wild fire burns in the background, in La Couronne, near Marseille, on August 4, 2020. Several fires were raging on August 4 evening near Marseille, with one particularly fuelled by strong winds, ravaging nearly 300 hectares of vegetation in a coastal area of Martigues, according to the authorities. (Photo by Xavier Leoty/AFP Photo) 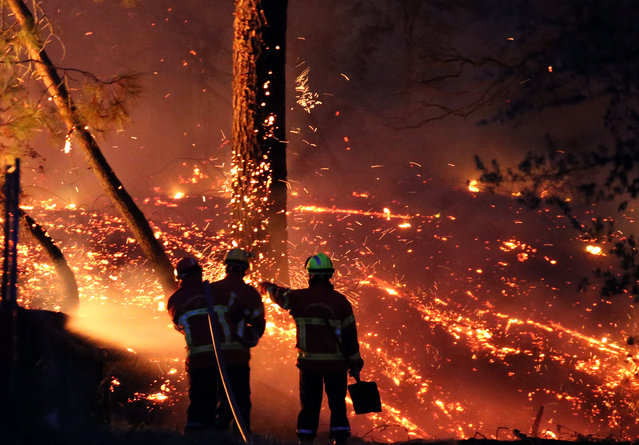 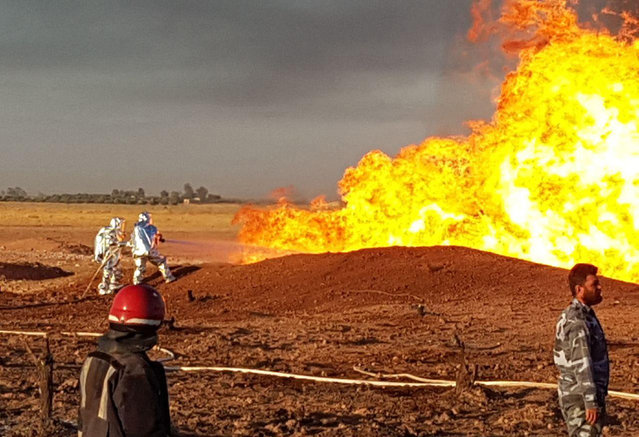 In this photo released by the Syrian official news agency SANA, Syrian firefighters extinguish the flames of a gas pipeline that hit by an explosion, between the northeastern Damascus suburbs of Adra and Dumair, in Syria Monday, August 24, 2020. An explosion early on Monday struck a gas pipeline in a Damascus suburb, cutting electricity throughout Syria, state media reported, citing the country's electricity and oil ministers. (Photo by SANA via AP Photo) 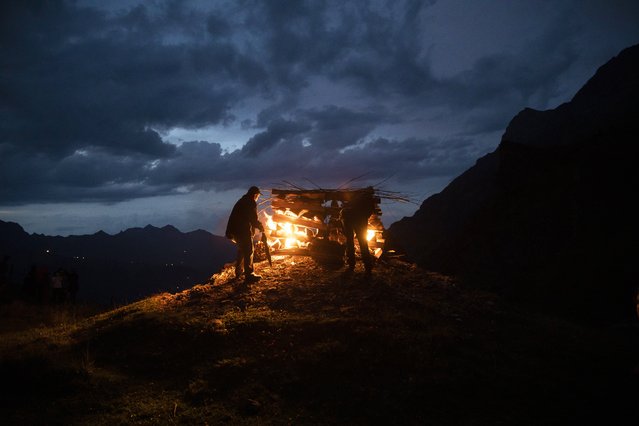 2 men light a bonfire on Saturday, August 1st, 2020 on the Engstligenalp above Adelboden. On the Swiss national holiday, bonfires were lit on several mountain peaks around Adelboden. (Photo by Peter Klaunzer/Keystone) 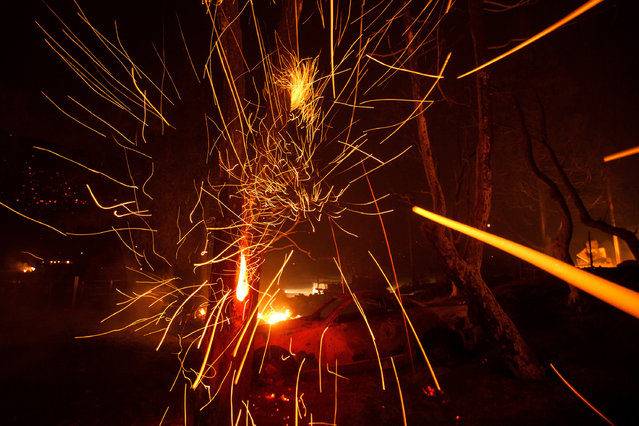 A burned vehicle is seen as wind whips embers from a tree burned by the Lake Hughes fire in Angeles National Forest on Thursday, August 13, 2020, north of Santa Clarita, Calif. (Photo by Ringo H.W. Chiu/AP Photo) 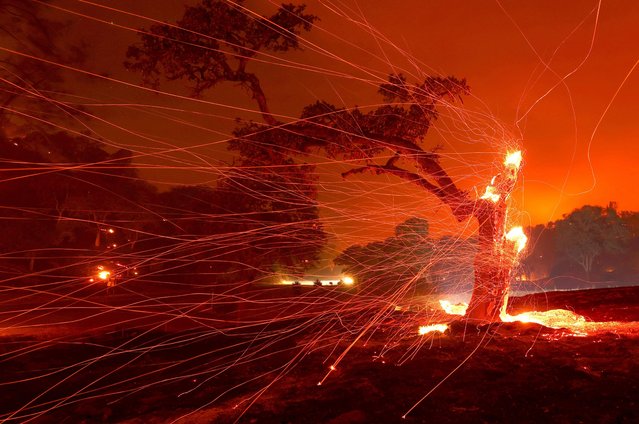 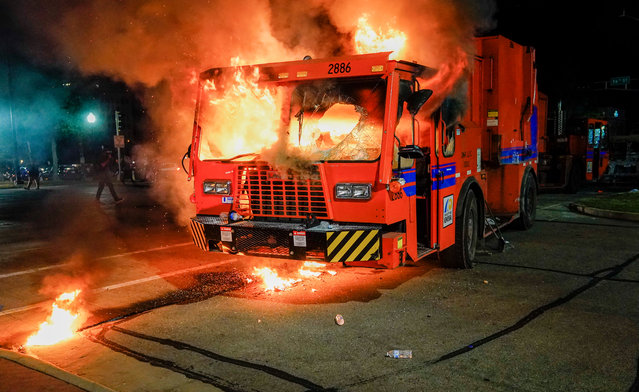 A city garbage truck burns during a second night of unrest in the wake of the shooting of Jacob Blake by police officers, in Kenosha, Wisconsin, USA, 24 August 2020. According to media reports Jacob Blake, a black man, was shot by a Kenosha police officer or officers responding to a domestic distubance call on 23 August, setting off protests and unrest. Blake was taken by air ambulance to a Milwaukee, Wisconsin hospital and protests started after a video of the incident was posted on social media. (Photo by Tannen Maury/EPA/EFE) 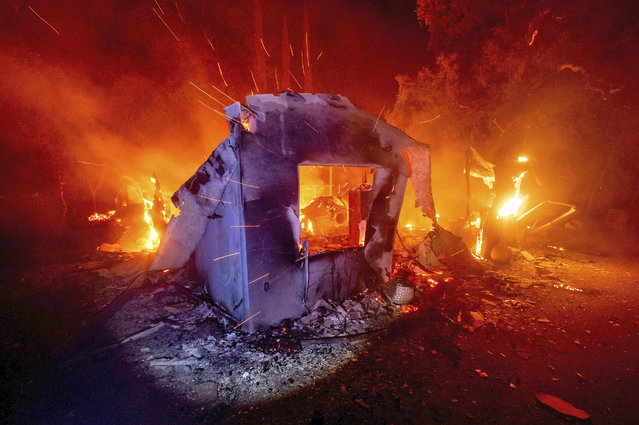