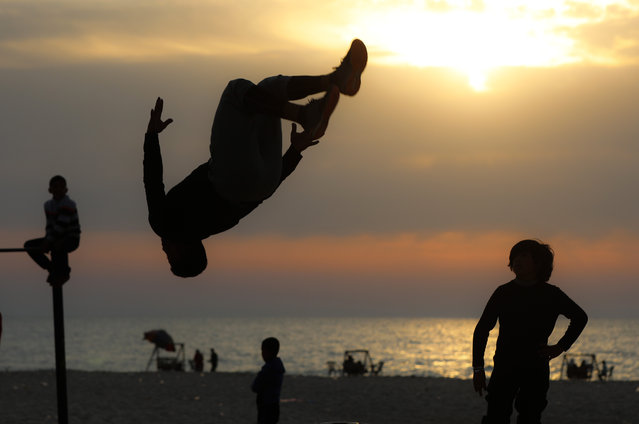 Palestinian youths enjoy their time during sunset at the beach in Gaza City on April 15, 2020. (Photo by Xinhua News Agency/Rex Features/Shutterstock) A snowboarder takes advantage of prime conditions in St John’s, Canada on January 19, 2020. The state of emergency ordered by the City of St. John's continues, leaving businesses closed and vehicles off the roads in the aftermath of the major winter storm that hit the Newfoundland and Labrador capital. (Photo by Canadian Press/Rex Features/Shutterstock) 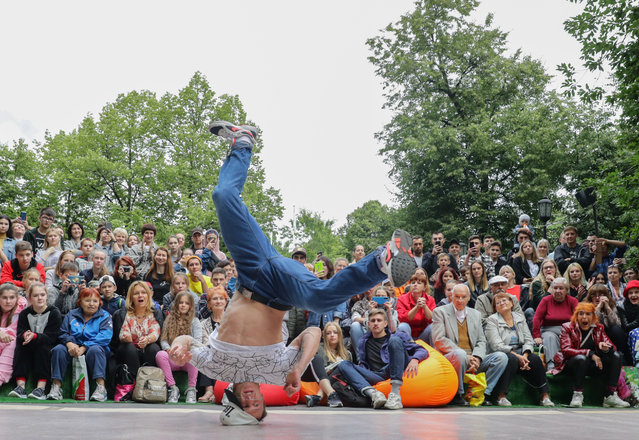 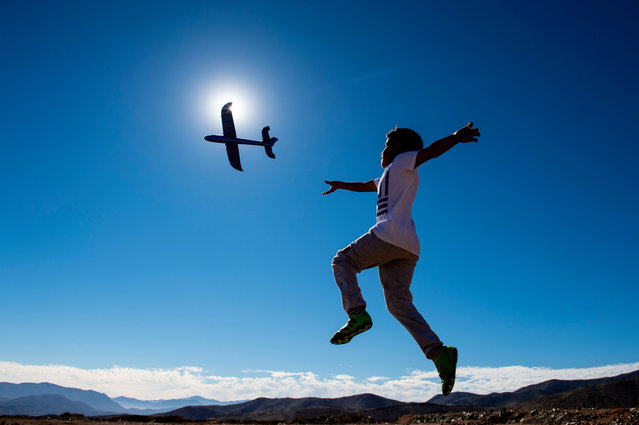 A boy plays with a toy plane on the eve of a solar eclipse, in La Higuera, Coquimbo Region, in the Atacama desert about 580 km north of Santiago, on July 1, 2019. A total solar eclipse will be visible from small parts of Chile and Argentina on July 2. (Photo by Martin Bernetti/AFP Photo) 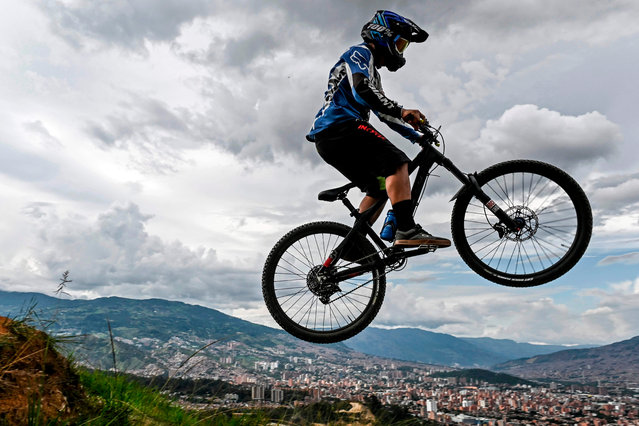 A man jumps on a downhill bike at the Three Crosses hill in Medellin, Colombia, on May 3, 2020, amid the new coronavirus pandemic. Colombia extended mandatory preventive isolation due to COVID-19 until at least May 11, however, in the city of Medellin people are allowed to excercise outdoors one hour a day (Photo by Joaquín Sarmiento/AFP Photo) 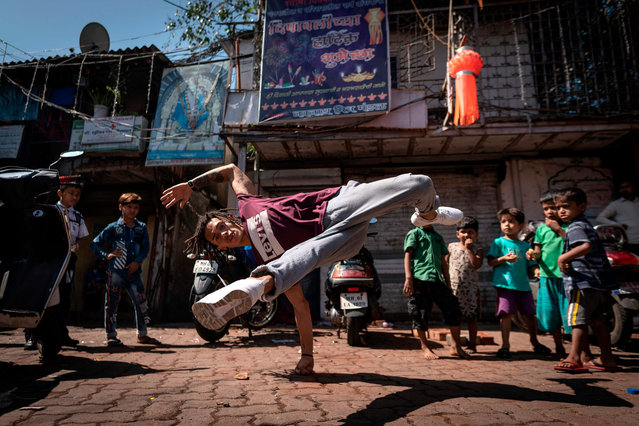 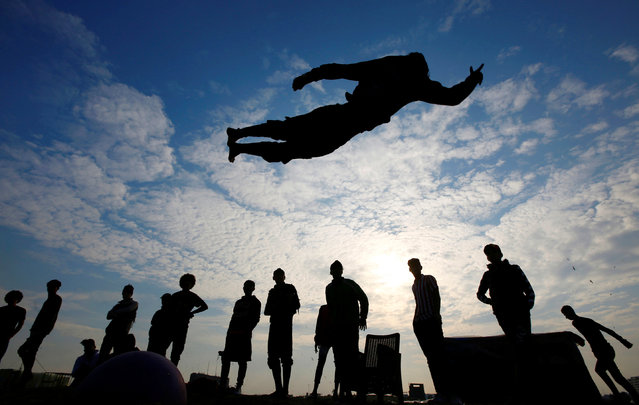 Iraqi demonstrators perform a somersault as they practice parkour during ongoing anti-government protests, near the Tigris River in Baghdad, Iraq, December 9, 2019. (Photo by Alaa al-Marjani/Reuters) 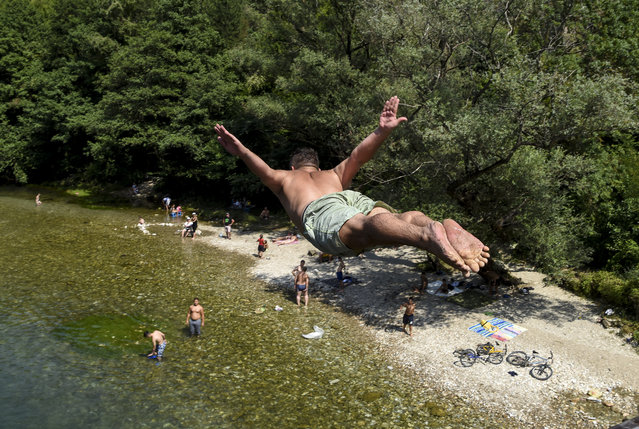 A young man dives in the river Treska near Skopje on August 8, 2019 as temperatures reached 37 degrees celsius. (Photo by Robert Atanasovski/AFP Photo) 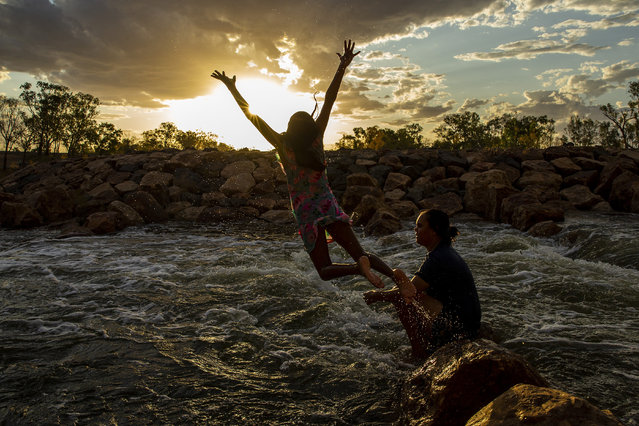 A girl is seen jumping from rocks at Brewarrina Weir on February 16, 2020 in Brewarrina, Australia. The Brewarrina Weir in Northern New South Wales overflowed on the weekend for the first time in years, as rain water from upstream flowed into the once dry river beds. The influx of water at the weir has also brought back to life the heritage listed Aboriginal fish traps, also known as Baiame's Ngunnhu. Recent rains and thunderstorms across Eastern Australia have seen a number of rivers feeding the Murray-Darling basin begin to flow. Pumping embargoes for the Barwon-Darling river system which prevent irrigators from extracting water from the river are currently in place, however there are fears that recent rainfalls may cause the NSW Government to lift the ban. (Photo by Jenny Evans/Getty Images) 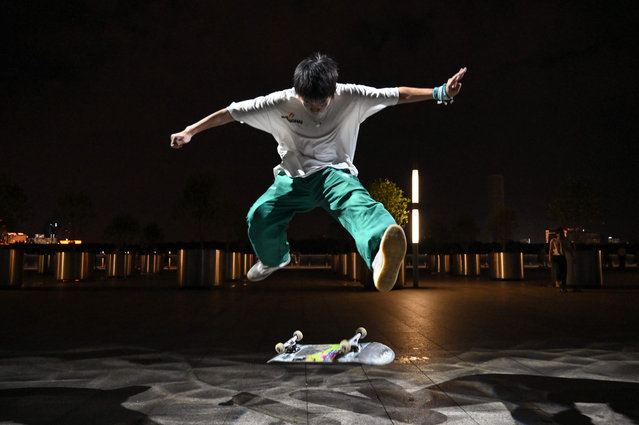 This photo taken on June 30, 2019 shows a boy practicing on a skateboard near the Shanghai Long Museum in Shanghai. Skateboarding will make its Olympic debut in Tokyo at the 2020 Olympic Games, but many in the growing scene in Shanghai complain that they have few places to go and are looked down upon as trouble-makers. (Photo by Hector Retamal/AFP Photo) 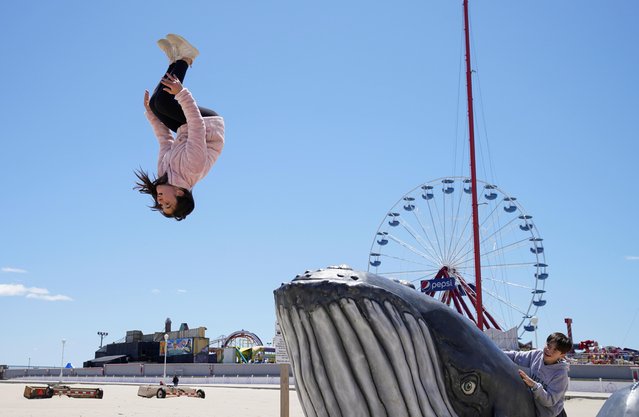 Eleni Kaliakoudas, 12, of Ocean City, leaps from a whale to perform a back tuck on the first day of eased coronavirus disease (COVID-19) restrictions in Ocean City, Maryland, U.S., May 9, 2020. (Photo by Kevin Lamarque/Reuters) 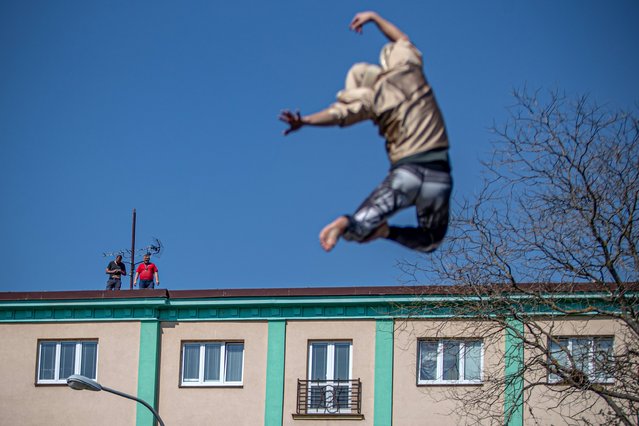 People look out from roof to a member of the contemporary circus company Cirk La Putyka performing on the mobile trampoline as he amuses local residents in Prague, Czech Republic, 09 April 2020. The aim of the Cirk La Putyka events in the streets of Czech capital is to get live art back to people during the lockdown. According to them, when people can't go to the artists, to the theater, the actors go to the people. The Czech government has imposed a lockdown in an attempt to slow down the spread of the pandemic COVID-19 disease caused by the SARS-CoV-2 coronavirus. (Photo by Martin Divisek/EPA/EFE) 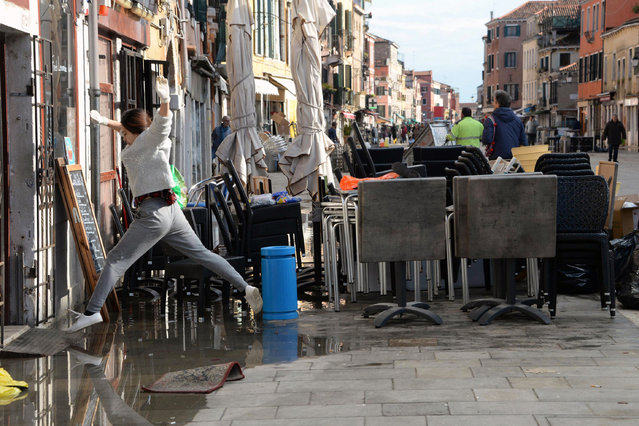 A woman jumps over a puddle during cleaning following a flooding in Venice, Italy, Thursday, November 14, 2019. The worst flooding in Venice in more than 50 years has prompted calls to better protect the historic city from rising sea levels as officials calculated hundreds of millions of euros in damage. The water reached 1.87 meters above sea level Tuesday, the second-highest level ever recorded in the city. (Photo by Andrea Merola/ANSA via AP Photo) 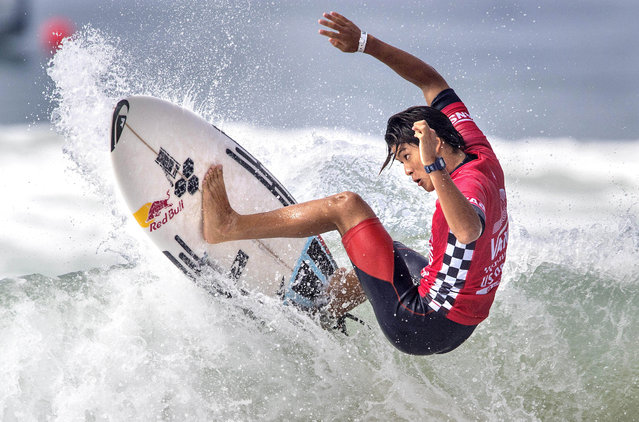 Kilian, 6, wears a protective face mask as he jumps from a bench, after restrictions were partially lifted for children, during the coronavirus disease (COVID-19) outbreak, in Igualada, Spain on April 26, 2020. (Photo by Nacho Doce/Reuters) 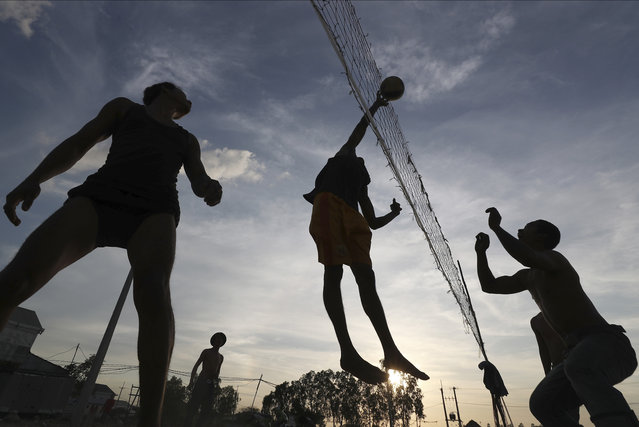 Local construction workers are silhouetted as they play volleyball after work near a construction site at Prey Mou village outside Phnom Penh, Cambodia, Thursday, January 2, 2020. (Photo by Heng Sinith/AP Photo) 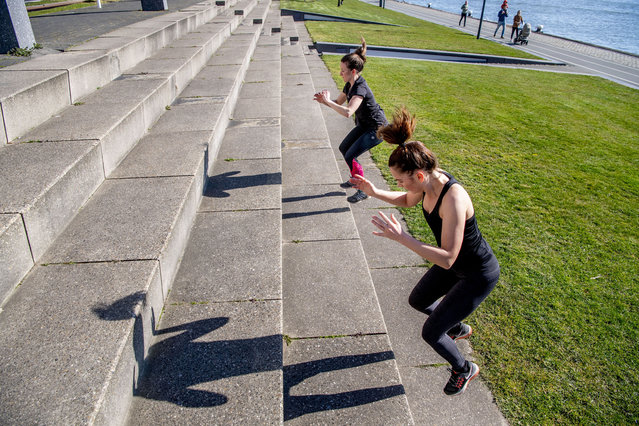 People exercise in the kralingsbos in Rotterdam, South Holland on April 4, 2020, because the gyms are closed outside because of the coronavirus sportschools are closed till at least 29 April. (Photo by Robin Utrecht/SIPA Press) 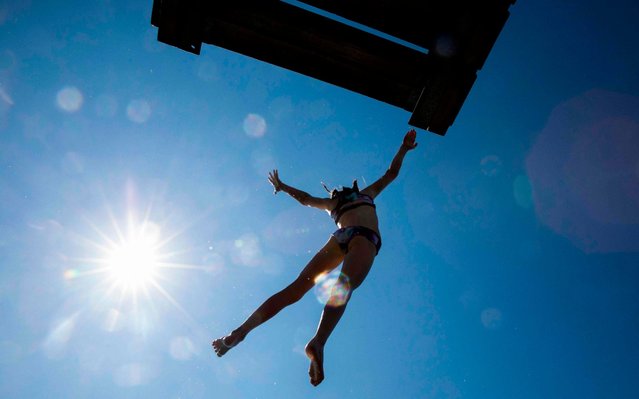 A girl is silhouetted against the sun as she jumps into the sea from a diving board on Lindoya island in Oslo on July 10, 2019. Forecasts predicts 27 celsius in the Norwegian capital on Wednesday and the water temprature is expected to reach 18. (Photo by Odd Andersen/AFP Photo) 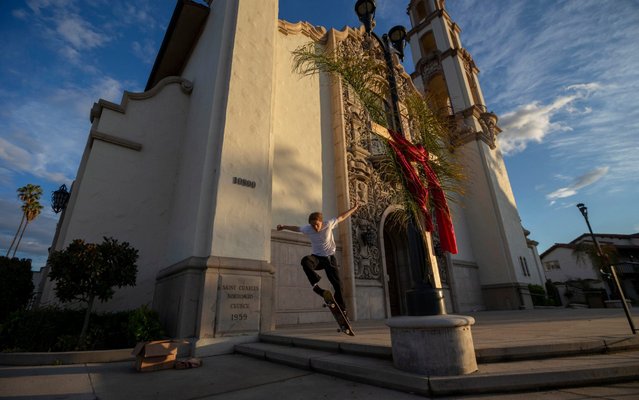 Miles de Rouin, an art student at San Francisco State, jumps on his skateboard outside St. Charles Borromeo Church, which was decorated with the Stations of the Cross, in Los Angeles on Friday, April 10, 2020. Churches in the state were closed due to the coronavirus. (Photo by Damian Dovarganes/AP Photo) 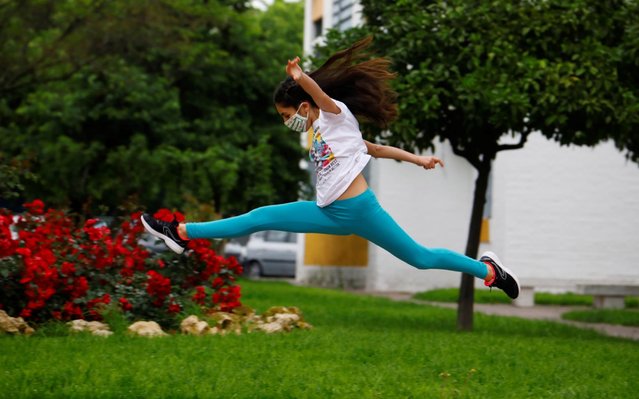 A girl wearing a face masks jumps at a street in Cordoba, Spain, 26 April 2020, on the first day that minors have been allowed for an hour a day outside of their homes following a nationwide lockdown ordered 44 days ago in Spain in an attempt to figth the spread of the coronavirus disease (COVID-19) pandemic. (Photo by SALAS/EPA/EFE/Rex Features/Shutterstock)
Edit Del
14 May 2020 00:03:00, post received 0 comments
Publication archive:
←   →
Popular tags:
All tags
Last searches: