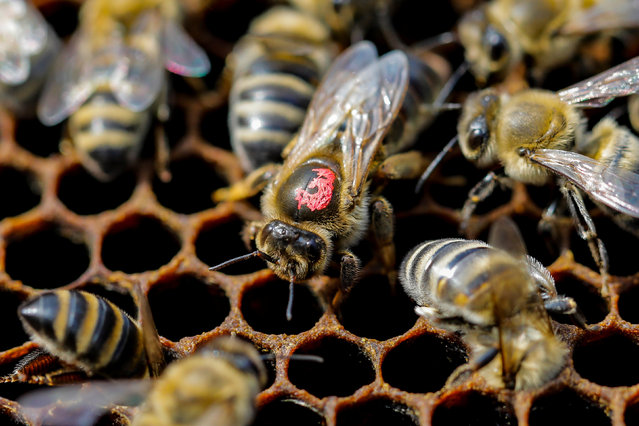 The queen bee is seen on the frame of a hive in a village of Ripanj near Belgrade, Serbia, April 9, 2019. Picture taken April 9, 2019. (Photo by Marko Djurica/Reuters) 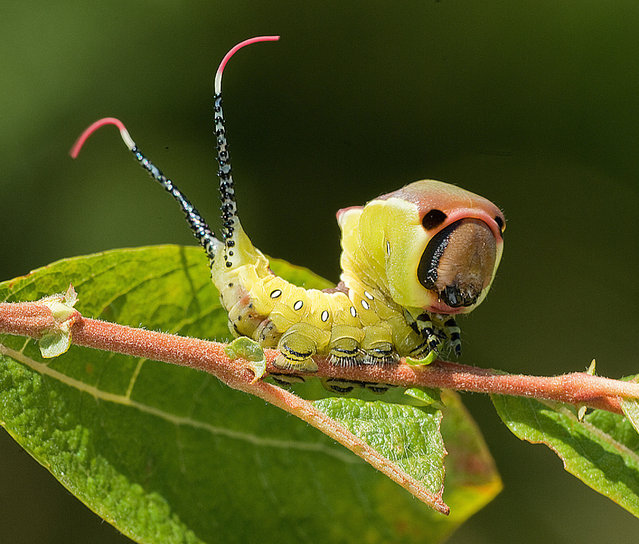 The caterpillar of a puss moth, one of more than 2,500 species of the insect. (Photo by John Bebbington/Butterfly Conservation/PA Wire Press Association) 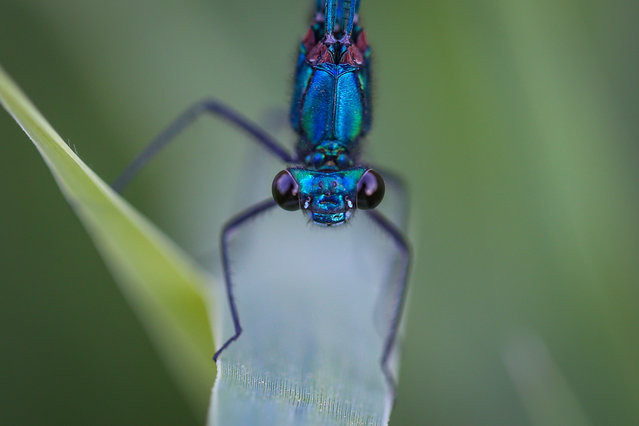 Close-up of a dragonfly sitting on a plant in Van, Turkey on July 29, 2019. (Photo by Ozkan Bilgin/Anadolu Agency/Getty Images) 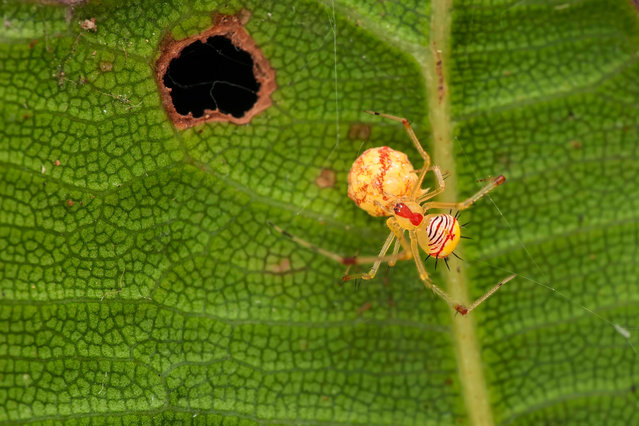 A spider on a leaf in west Borneo, Indonesia. (Photo by Room Agency/Alamy Stock Photo) 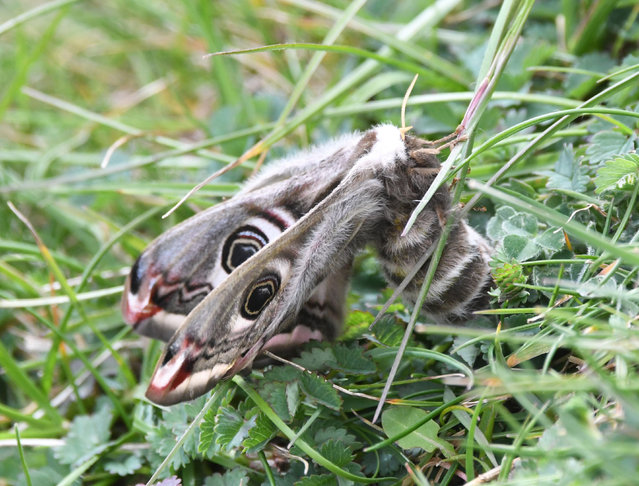 An emperor moth on chalk grassland near Cuckmere Haven in the South Downs national park. Emperor moths have a wingspan of up to 9cm and ornate wing patterns. (Photo by Tim Squire/South Downs National Park Authority) 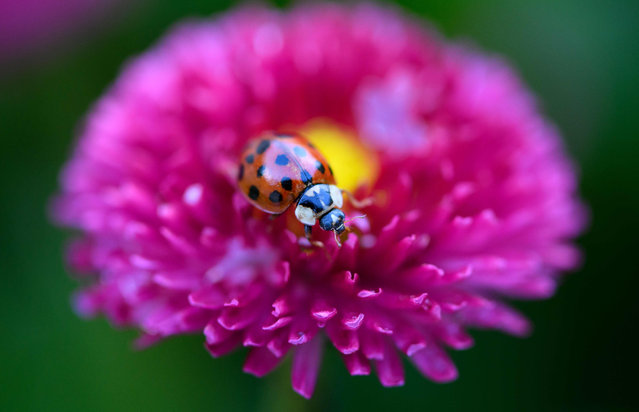 A ladybird rests on a daisy in Munich, southern Germany on June 13, 2019. (Photo by Sven Hoppe/AFP Photo/dpa) 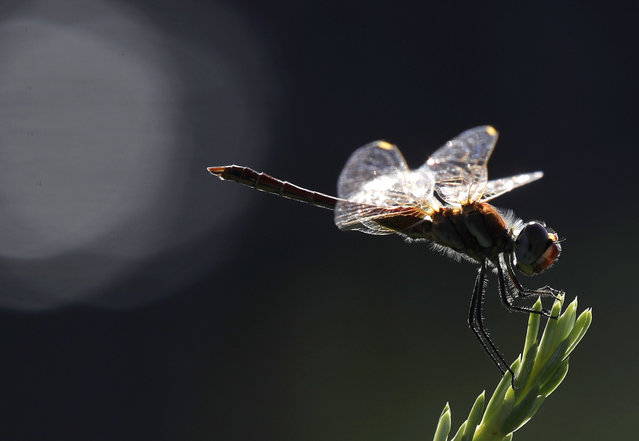 A dragonfly perches on a pine branch at the “Library of trees” public park in Milan, Italy, Tuesday, July 30, 2019. (Photo by Luca Bruno/AP Photo) 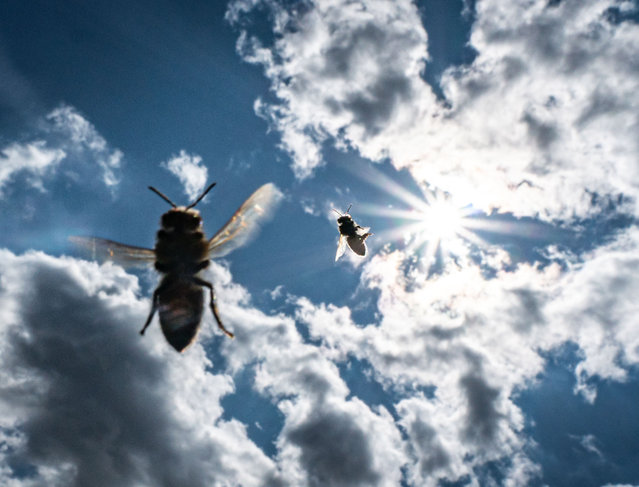 Bees fly before the sun in the slightly cloudy sky to their hive in Frankfurt am Main, Germany on August 13, 2019. (Photo by Frank Rumpenhorst/dpa) 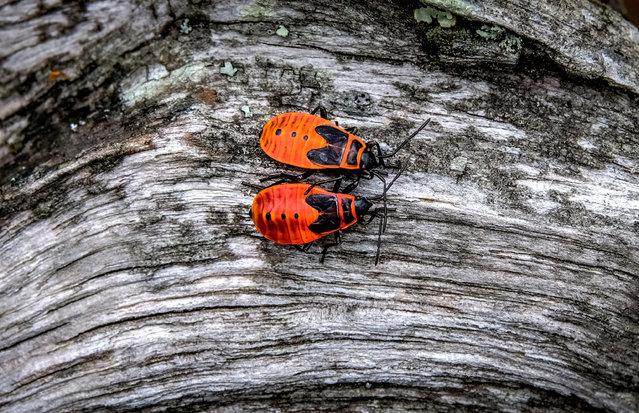 Two firebugs (Pyrrhocoris apterus) crawl on a snag in Prioksko-Terrasny nature reserve outside the town of Serpukhov, Russia on July 12, 2019. (Photo by Yuri Kadobnov/AFP Photo) 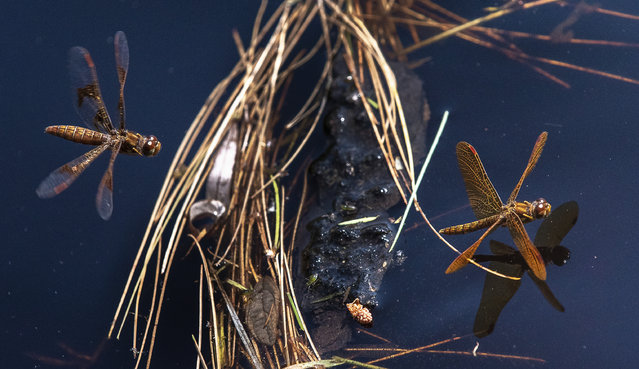 A pair of dragonflies dance around a pond at Pineland Farms in New Gloucester, Maine, Monday, July 15, 2019. (Photo by Russ Dillingham/Sun Journal via AP Photo) 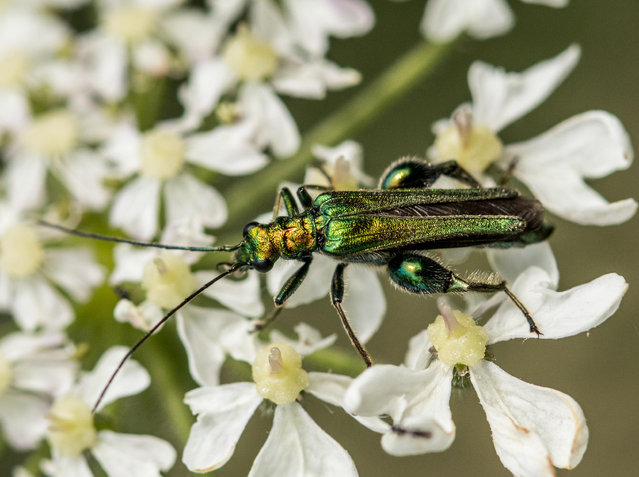 A swollen-thighed beetle – Oedemera nobilis – at a riverbank in British woodland. (Photo by Coffeyshots/Alamy Stock Photo) 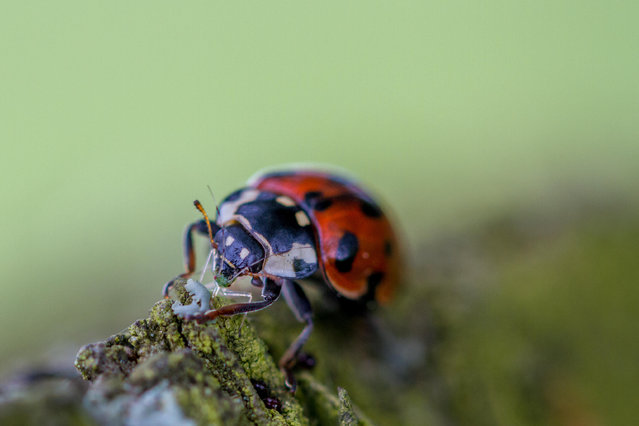 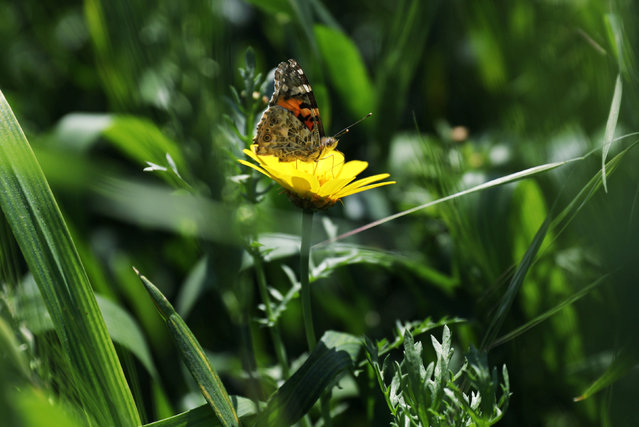 A butterfly is pictured as it sits on a flower on a field near the village of Agia Anna, Cyprus on March 22, 2019. (Photo by Yiannis Kourtoglou/Reuters) 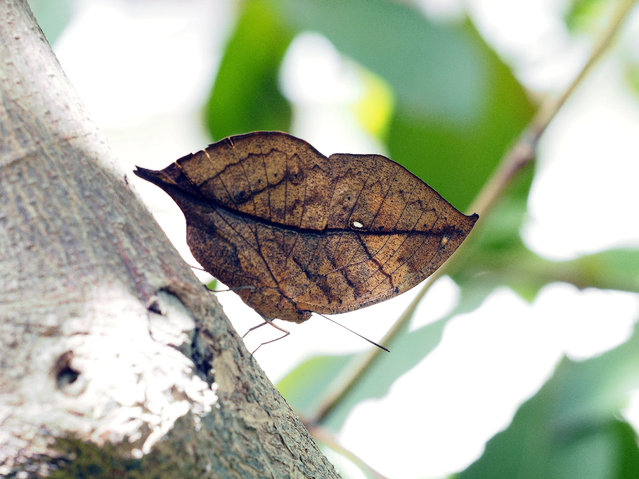 A Dead Leaf butterfly (Kallima inachu formosana, also called Orange Oakleaf Butterfly) rests on a tree trunk at the Taipei Zoo in Taipei, Tawian, 03 August 2019. Dead Leaf butterfly can be found in Tropical Asia from India to Japan. When its wings close, it resembles a dead leaf, providing camouflage against predators including birds, ants, spiders and wasps. (Photo by David Chang/EPA/EFE) 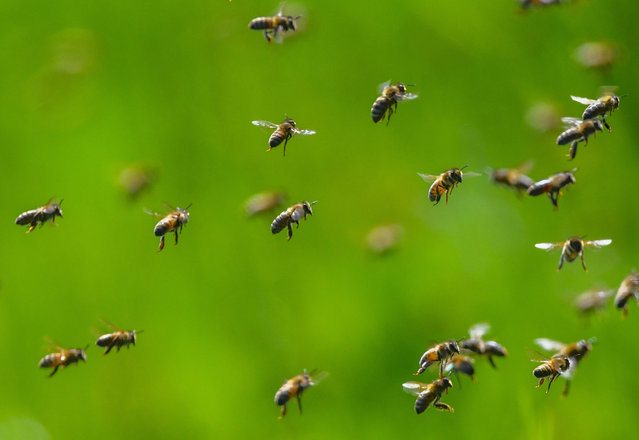 Bees at the edge of a meadow in Brandenburg, Germany. A report in the US this week said beekeepers across the country had lost four in 10 of their honeybee colonies in the last year. (Photo by Patrick Pleul/dpa) 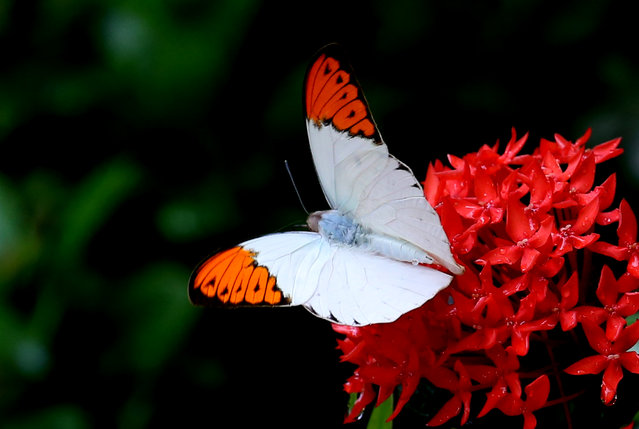 A butterfly rests on flowers in Yangon, Myanmar. (Photo by U Aung/Xinhua News Agency/Barcroft Media) 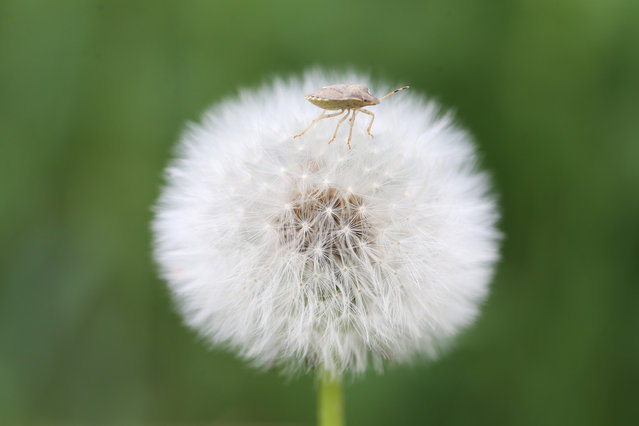 A close-up of an insect on a blowball during spring season in Turkey's eastern Van province on May 20, 2019. (Photo by Ozkan Bilgin/Anadolu Agency/Getty Images) 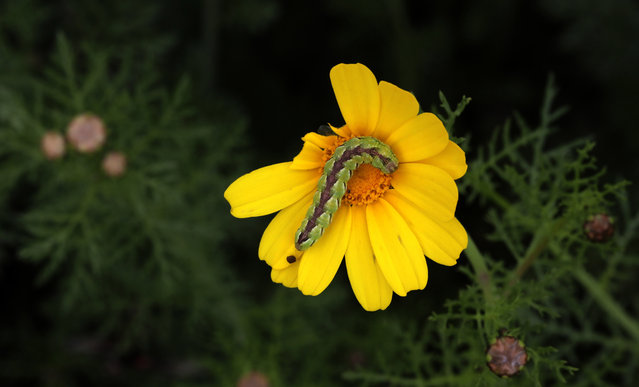 An insect stands on a yellow Chrysanthemum flower in a field near the West Bank City of Nablus, 11 March 2019. (Photo by Alaa Badarneh/EPA/EFE) 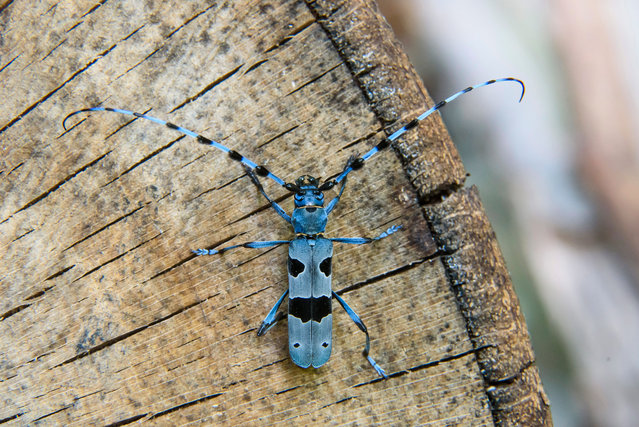 A Rosalia longicorn (Rosalia alpina) is seen on a tree trunk near Siatorska Bukovinka, Slovakia, 10 July 2019. Rosalia longicorn was chosen insect of 2019 in Hungary by the Hungarian Entomological Society. The insect is classified as protected species in Hungary. (Photo by Peter Komka/EPA/EFE) 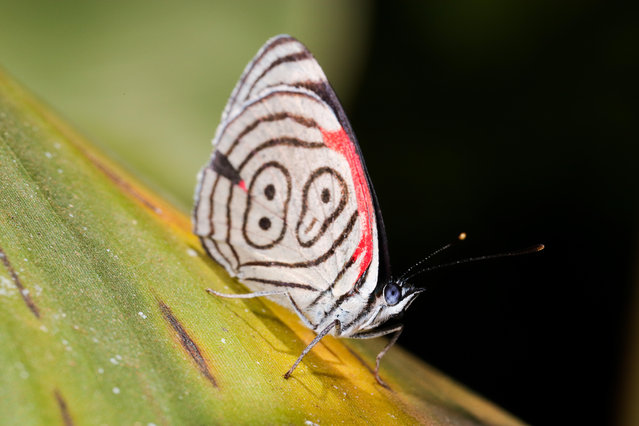