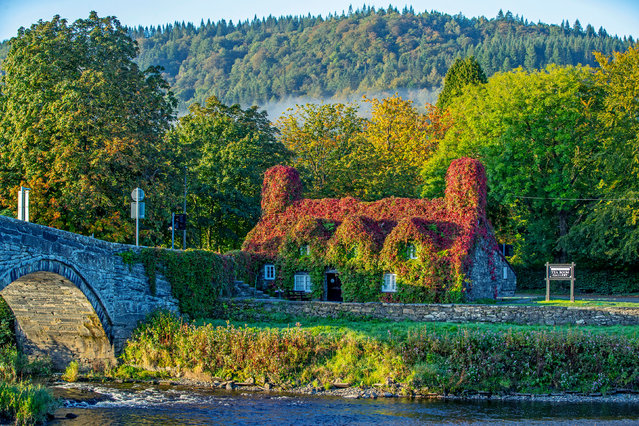 A sign post on the narrow bridge beside the Tu Hwnt l'r Bont Tearoom on the banks of the River Conwy in Llanrwst, north Wales, England on September 18, 2019. One of the UK's most scenic views has been ruined with the installation of a new road sign warning drivers to give way across a narrow bridge. (Photo by Peter Byrne/PA Images via Getty Images) 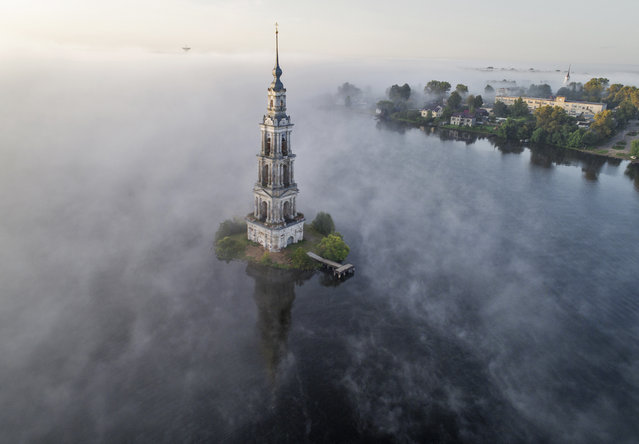 The famous Kalyazin Bell Tower, part of the submerged monastery of St. Nicholas, is seen in the morning fog in the town of Kalyazin located on the Volga River, 180 km (111 miles) north-east of Moscow, Russia, Monday, August 12, 2019. After the construction of the Uglich Dam in 1939 to form the Uglich Reservoir, the old parts of Kalyazin, including several medieval structures, were submerged under the reservoir's waters. (Photo by Dmitri Lovetsky/AP Photo) 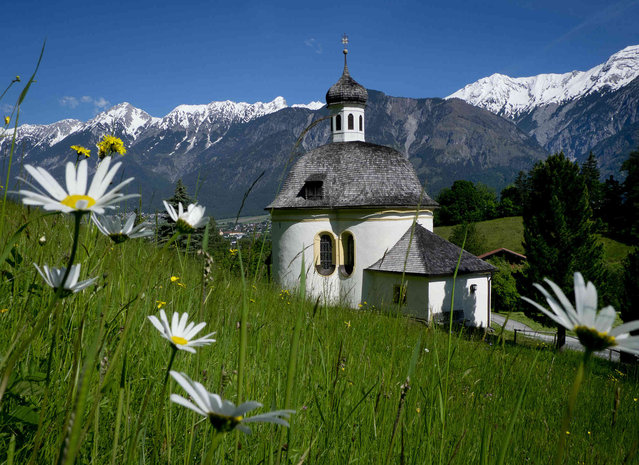 A small chapel stands on a hill in front of the North Chain mountains in Innsbruck, Austria, Saturday, June 1, 2019. Snow persists on the peaks while lower slopes sport summer flowers with lush green fields. (Photo by Michael Probst/AP Photo) 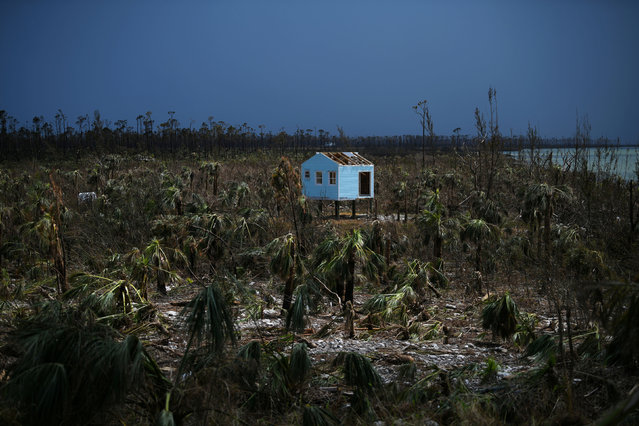 A destroyed house is seen in the wake of Hurricane Dorian in Marsh Harbour, Great Abaco, Bahamas, September 8, 2019. (Photo by Loren Elliott/Reuters) 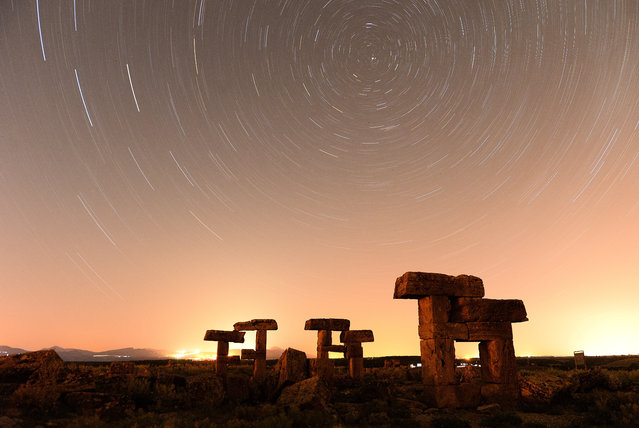 Long exposure of starlight trails in the night sky over the ruins at Blaundus ancient city at night in Ulubey district of Turkey`s Usak on July 03, 2019. Astronomy photographers frequently visit the ancient city of Blaundus, located on a peninsula surrounded by deep valleys. The city was established by Macedonians who came to the region after Alexander the Great's Anatolian expedition. Later the city was ruled by the Pergamon Kingdom and the Roman Empire. Entrance gate of the city, horses, and arches symbolizing the city are among the historical buildings in the region. The buildings in the ancient city offer different visuals on day and night. (Photo by Soner Kilinc/Anadolu Agency/Getty Images) 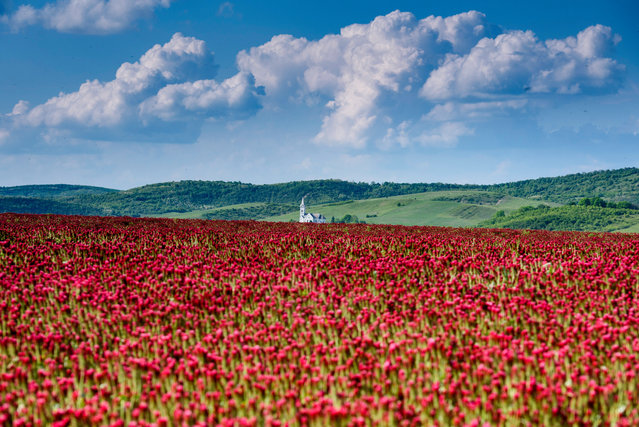 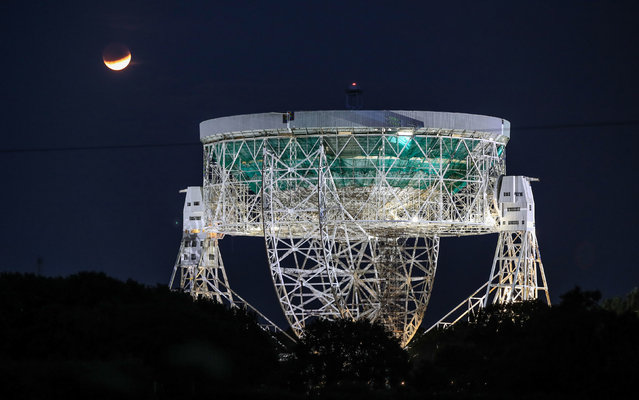 A partial lunar eclipse is visible above the Jodrell Bank observatory in Cheshire, England on July 16, 2019. (Photo by Peter Byrne/PA Wire Press Association) 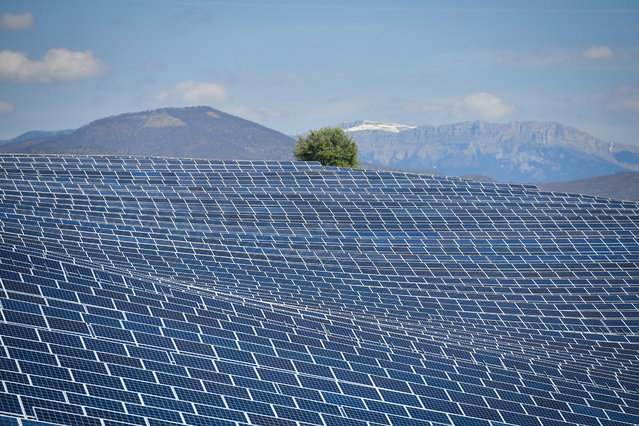 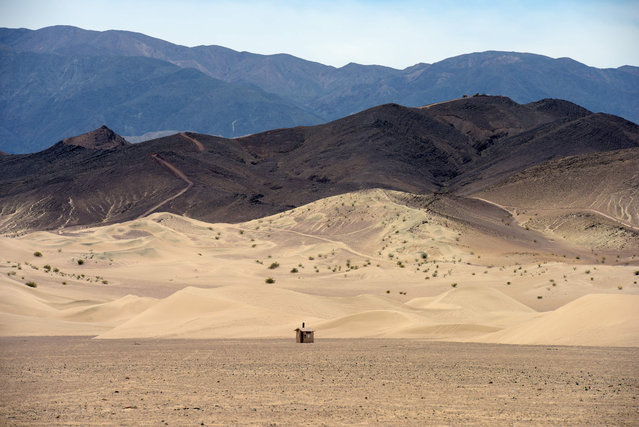 The Dumont Dunes are pictured in the Mojave desert in California on April 8, 2019. (Photo by Agustin Paullier/AFP Photo) 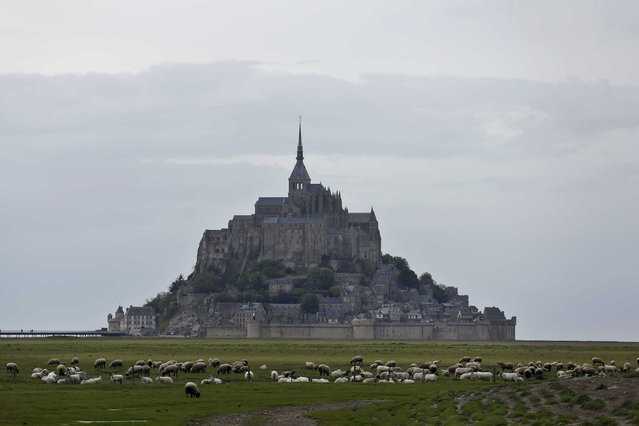 Sheeps graze in the fields around the Mont Saint Michel, Wednesday, May 8, 2018, in western France. (Photo by Thibault Camus/AP Photo) 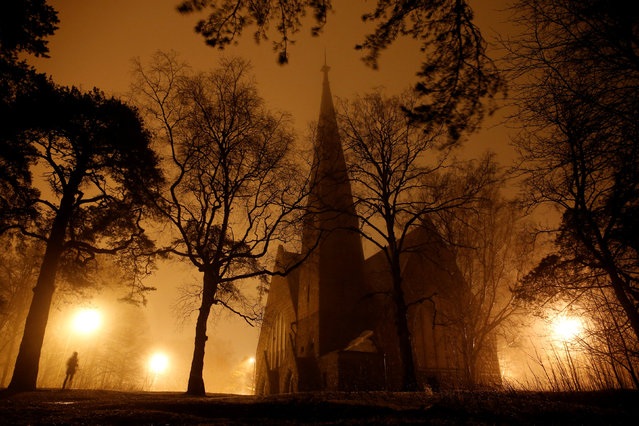 A view through mist shows the Kirk of Saint Mary Magdalene in Primorsk, Leningrad Region, Russia on March 24, 2019. (Photo by Anton Vaganov/Reuters) 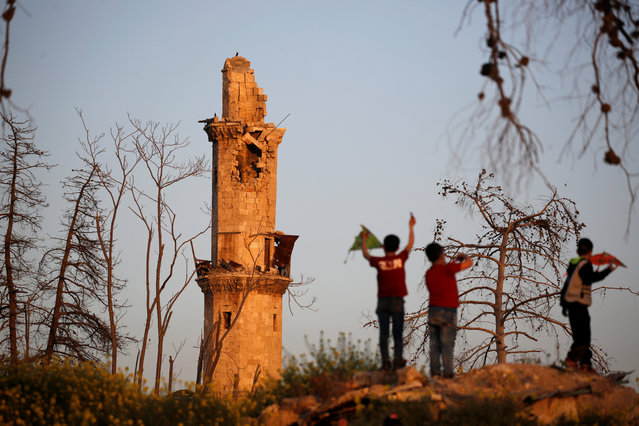 Boys play near the 14th century Tawashi Mosque with a damaged minaret, in the old city of Aleppo, Syria April 12, 2019. (Photo by Omar Sanadiki/Reuters) 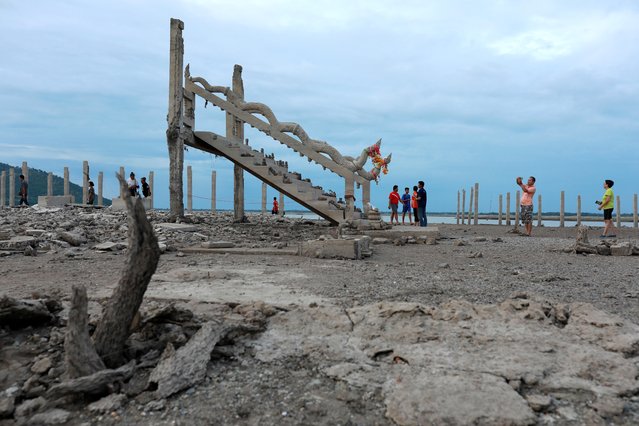 People walk and take pictures at the ruins of a Buddhist temple which has resurfaced in a dried-up dam due to drought, in Lopburi, Thailand on August 1, 2019. Thousands are flocking to see the Buddhist temple exposed after drought drove water levels to record lows in a dam reservoir where it had been submerged. (Photo by Soe Zeya Tun/Reuters) 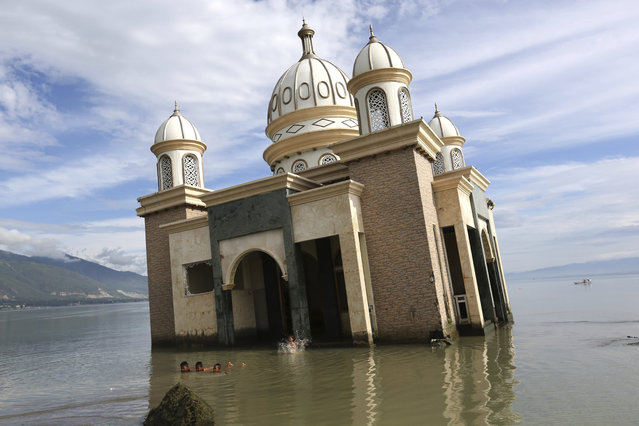 In this Wednesday, April 3, 2019, photo, children play in the water on a beach near a mosque collapsed during Sept. 28, 2018, earthquake is seen in the background in Palu, Central Sulawesi, Indonesia. The earthquake spawned a large localized tsunami that wiped out coastal areas, while liquefaction caused by the shaking turned entire neighborhoods into rivers of sludge. The disaster killed thousands of people, making it the world’s deadliest seismic event in 2018. (Photo by Tatan Syuflana/AP Photo) 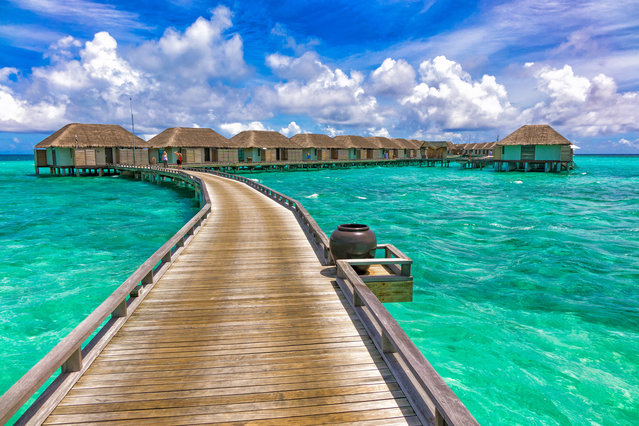 Velassaru Resort in Maldives. A little island resort in the South Male Atoll with exotic beaches, over water villas, clear and turquoise water. (Photo by Nicolas Economou/NurPhoto via Getty Images) 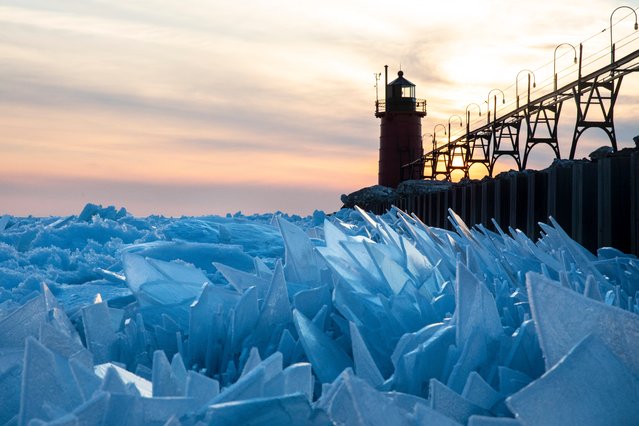 Shards of ice pile up on Lake Michigan along the South Haven Pier in South Haven, Mich., on Tuesday, March 19, 2019. (Photo by Joel Bissell/Kalamazoo Gazette via AP Photo) 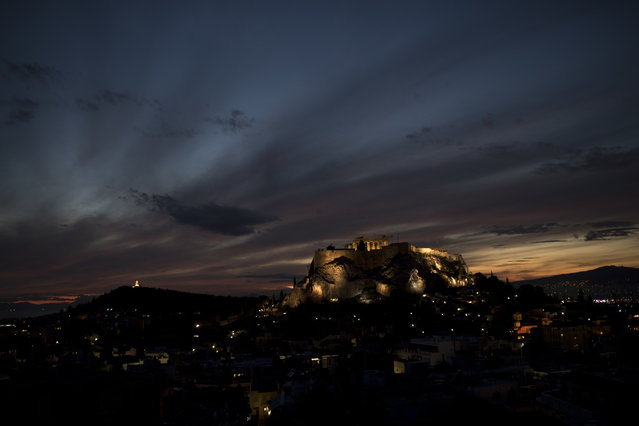 The sun sets behind the ancient Acropolis hill and the ruins of the fifth century B.C. Parthenon temple in Athens, on Thursday, November 9, 2017. (Photo by Petros Giannakouris/AP Photo) 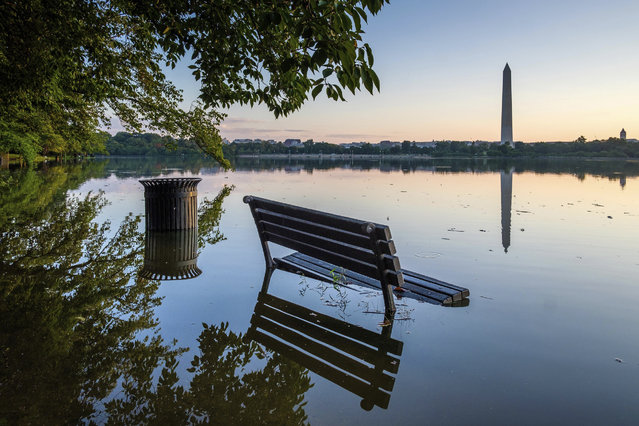 A bench is surrounded by water after recent heavy rains caused the Tidal Basin in Washington to overflow its banks Wednesday, August 22, 2018. (Photo by J. David Ake/AP Photo) 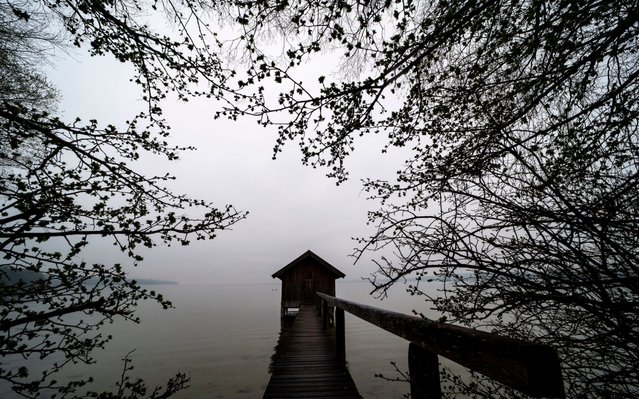 A boat house is framed by branches at Lake Ammersee in Stegen, Bavaria, Germany, 10 April 2019. (Photo by Lukas Barth-Tuttas/EPA/EFE) 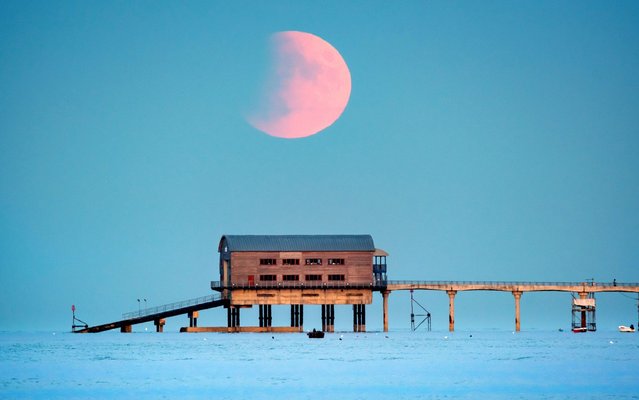