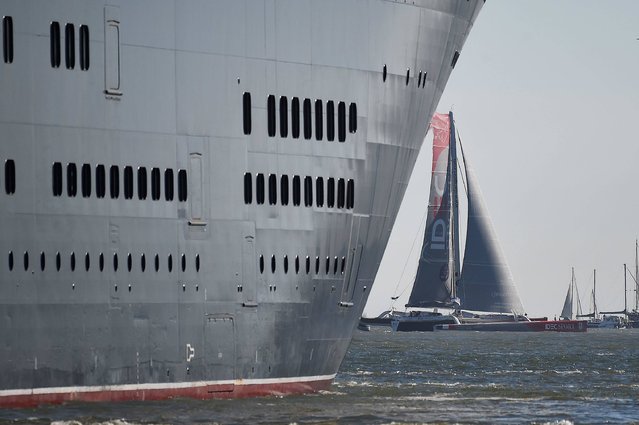 British cruise ship Queen Mary 2 and Ultim trimarans take the start of “The Bridge 2017” transatlantic race on June 25, 2017 from the French western port city of Saint-Nazaire. “The Bridge 2017” is a 3,152-mile (5,837 km) race between the British cruise liner RMS Queen Mary 2 and four trimarans, from Saint-Nazaire to New-York City. (Photo by Jean-Sebastien Evrard/AFP Photo) 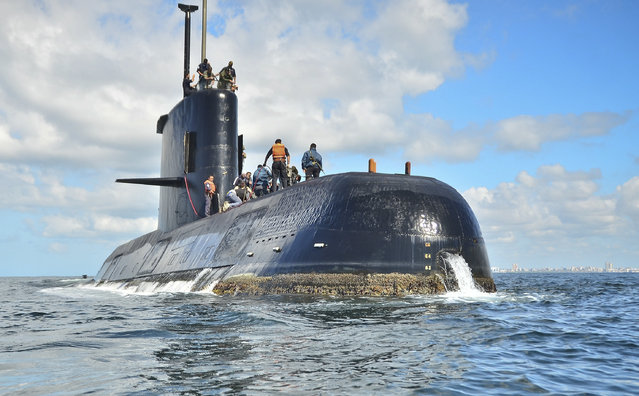 In this undated file photo provided by the Argentina Navy shows an ARA San Juan, a German-built diesel-electric vessel, near Buenos Aires, Argentina. The Navy's spokesman said Monday, December 4, 2017, that U.S and Russian ships carrying remotely operated vehicles capable of deep seafloor searches are joining other vessels hunting for an Argentine submarine that went missing in the South Atlantic 19 days ago. (Photo by Argentina Navy via AP File) 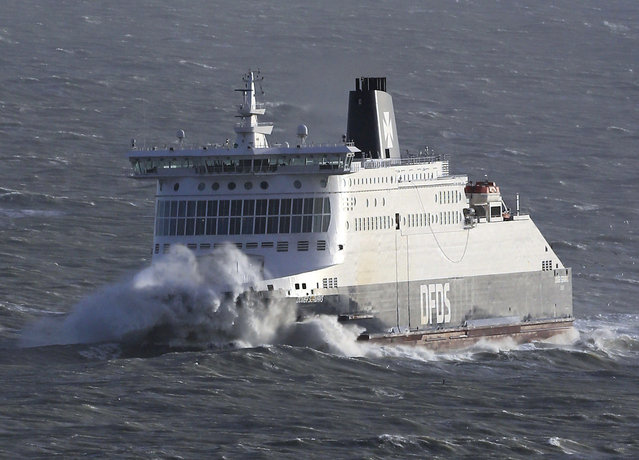 The DFDS Dover Seaways passenger ferry is engulfed by waves in heavy weather as she approaches the Port of Dover, southern England, Wednesday January 3, 2018. A severe storm packing winds of up to 100 miles per hour has battered much of Europe overnight and Wednesday morning, bringing heavy rain, hail and lightning to the region and leaving some thousands of homes without power. (Photo by Gareth Fuller/PA Wire via AP Photo) 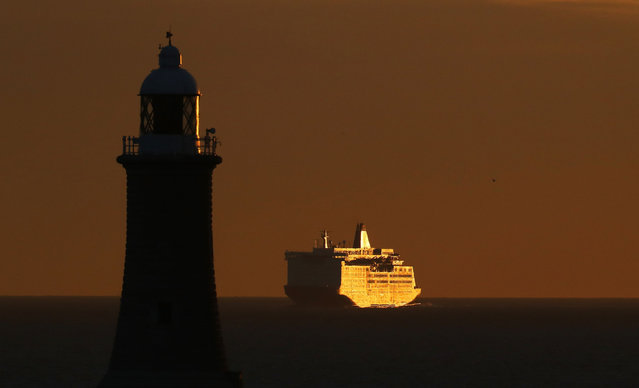 The Princess Seaways arrives at the Port of Tyne, England at dawn November 30, 2016. (Photo by Owen Humphreys/PA Wire) 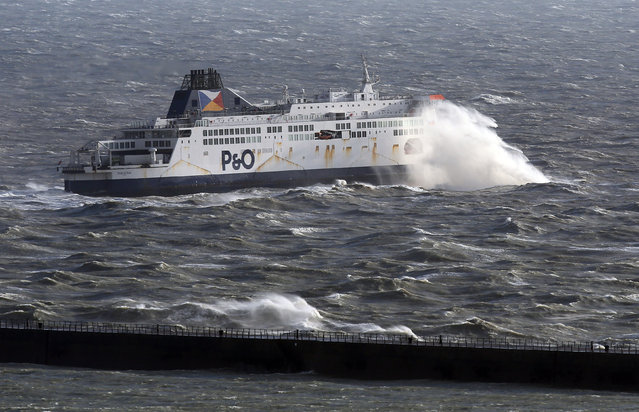 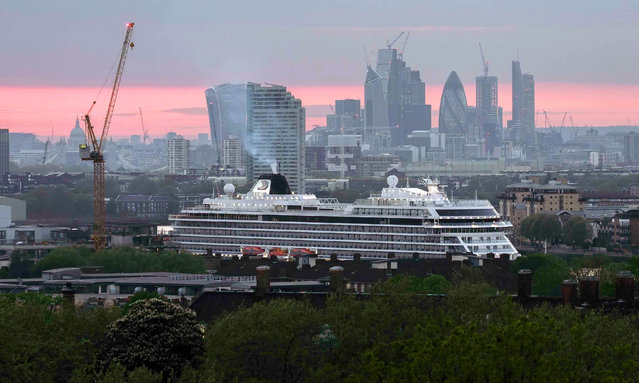 Cruise liner the Viking Sun is docked at Greenwich pier on the river Thames as the sun sets over St Paul’s Cathedral and the City of London, England on May 4, 2018. (Photo by Claire Doherty/Sipa USA/Rex Features/Shutterstock) 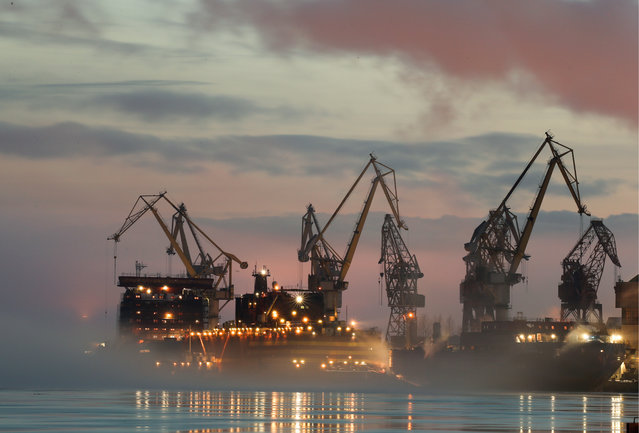 The “Akademik Lomonosov” floating nuclear power station in St Petersburg, Russia on March 6, 2017, which will be fuelled at the Baltic shipyard and then sent to the Chukotka region. Greenpeace are protesting against the fuelling. (Photo by Peter Kovalev/TASS) 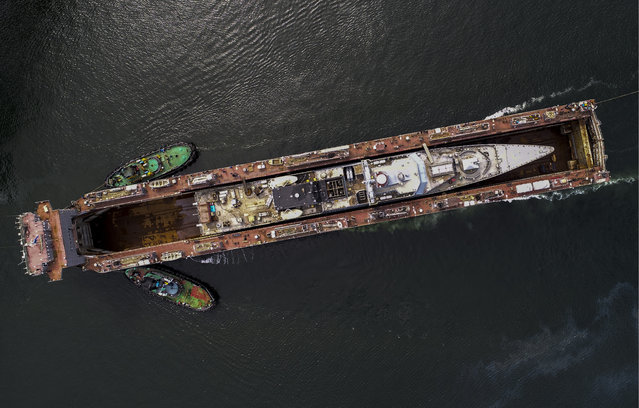 The Pacific Fleet' s newest corvette Gromky of the Steregushchiy class transported by the Zeya floating dock in the Zolotoy Rog (Golden Horn) Bay, Vladivostok, Russia on August 31, 2018. The corvette has arrived in Vladivostok from the Amur Shipbuilding Plant and is to join the Russian Pacific Fleet by the end of 2018. (Photo by Yuri Smityuk/TASS) 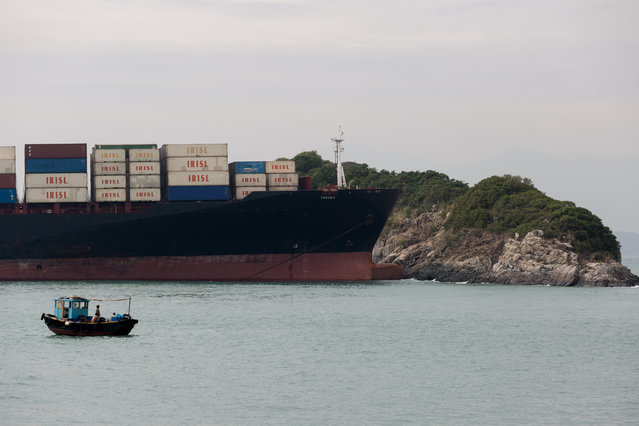 The container vessel Touska is stuck after hitting an islet near Ap Lei Chau in Hong Kong, China, 06 November 2017. No one was injured when the 294-meter Touska, an Iranian vessel on its way from Taiwan to Shenzhen, hit Magazine Island on 05 November in the East Lamma Channel. (Photo by Jerome Favre/EPA/EFE) 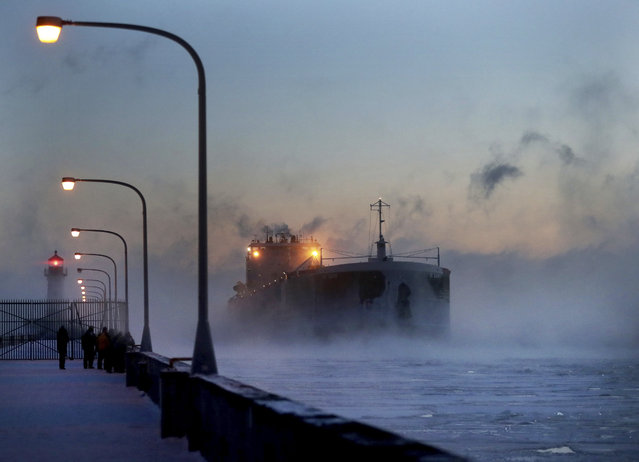 Steam rises from Lake Superior as the ship St. Clair comes to harbor during some of the coldest temps of the year, Sunday, December 31, 2017, at Canal Park in Duluth, Minn. The St. Clair is a self-unloader built in 1976 at Sturgeon Bay, Wis., and is 770 feet long and has 26 hatches that open into 5 cargo holds, providing a load capacity of 45,000 tons. (Photo by David Joles/Star Tribune via AP Photo) 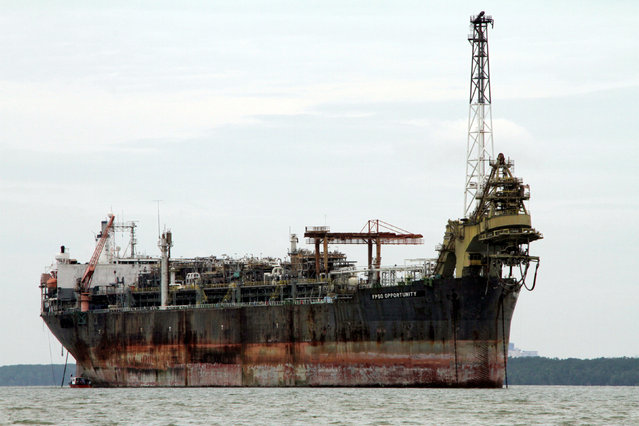 The laid-up FPSO Opportunity in the Johor river August 24, 2016. (Photo by Henning Gloystein/Reuters) 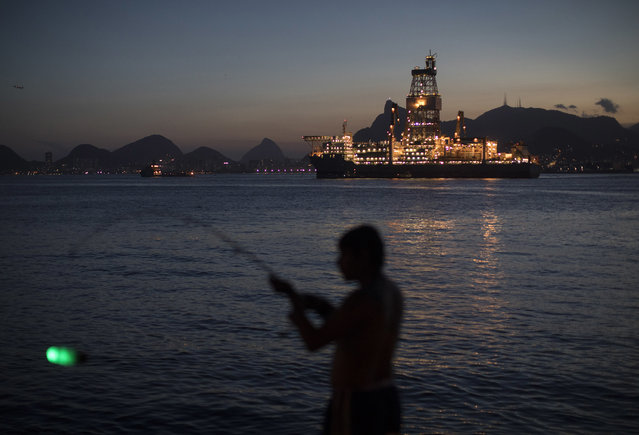 In this March 28, 2018 photo, a man holds his fishing rod carrying an illuminated bobber, on the shore of Guanabara Bay where Petrobras operates its ultra-deep drilling vessel Laguna Star NS-44 in Niteroi, Brazil. Brazil's Petrobras says profit rose 56 percent in first quarter of the year as the state-controlled oil company is beginning to emerge from a massive corruption scandal. (Photo by Leo Correa/AP Photo) 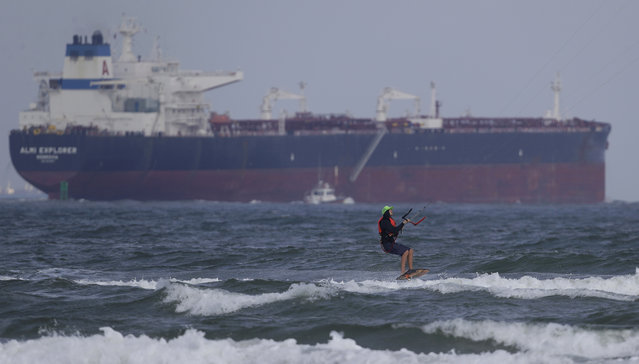 In this Friday, September 29, 2017 photo, a kite surfer glides along the coast as an oil tanker passes in the background, in Port Aransas, Texas. Hurricane Harvey dealt a body blow to the beach town and wiped out the end of the lucrative summer season. Tourists are expected to stay away through the holidays, and even the possibility of getting back to business by spring break looks bleak. (Photo by Eric Gay/AP Photo) 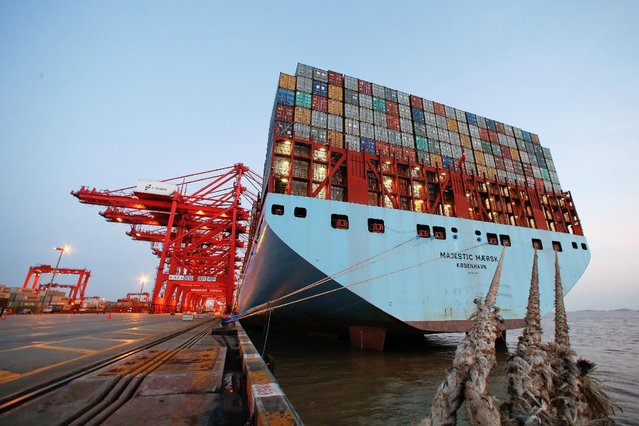 A Hanjin Shipping Co ship is seen stranded outside the Port of Long Beach, California, September 8, 2016. (Photo by Lucy Nicholson/Reuters) 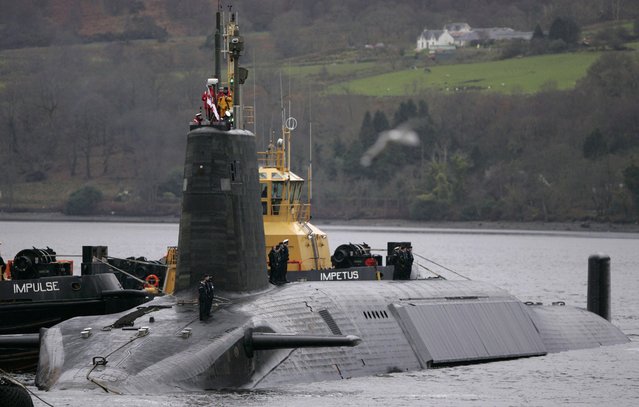 Crew from HMS Vengeance, a British Royal Navy Vanguard class Trident Ballistic Missile Submarine, stand on their vessel as they return along the Clyde river to the Faslane naval base near Glasgow, Scotland December 4, 2006. (Photo by David Moir/Reuters) 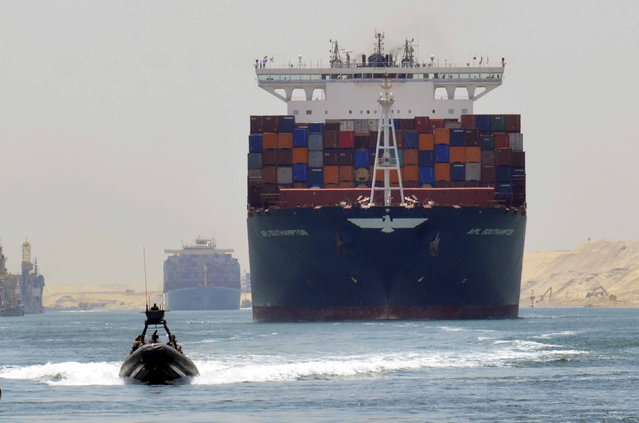 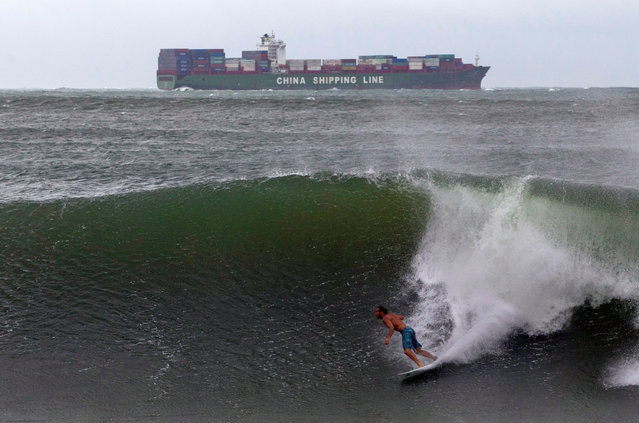 A surfer takes advantage of large waves caused by hurricane Irina which is sitting some 200 nautical miles (370 km) off Durban, March 5, 2012. (Photo by Rogan Ward/Reuters) 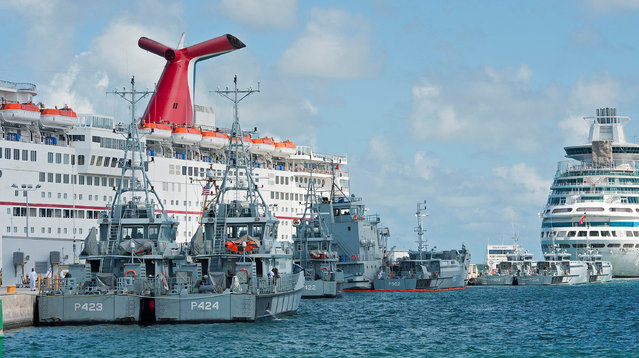 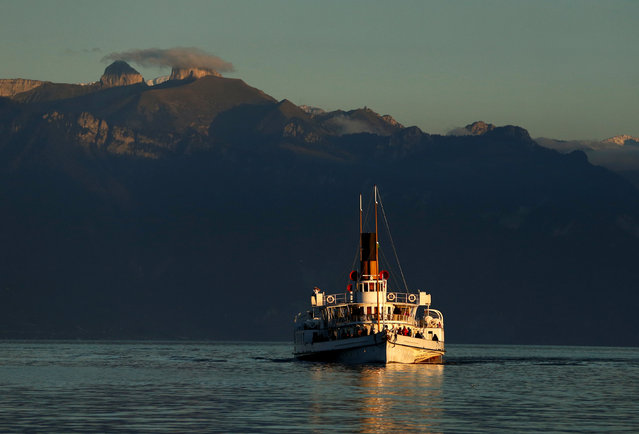