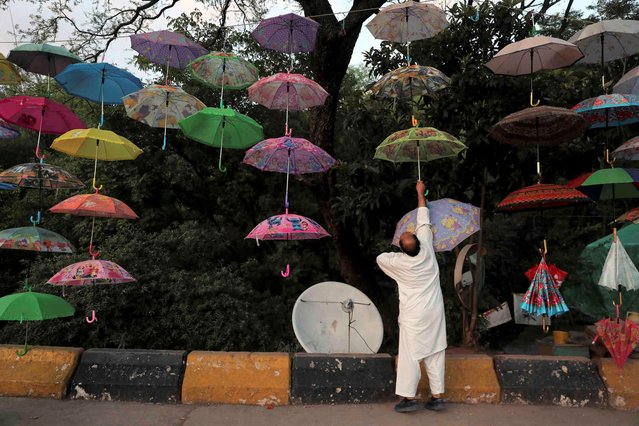 A customer buys an umbrella on a roadside in Murree, near Islamabad, Pakistan, Friday, May 6, 2022. (Photo by Rahmat Gul/AP Photo) 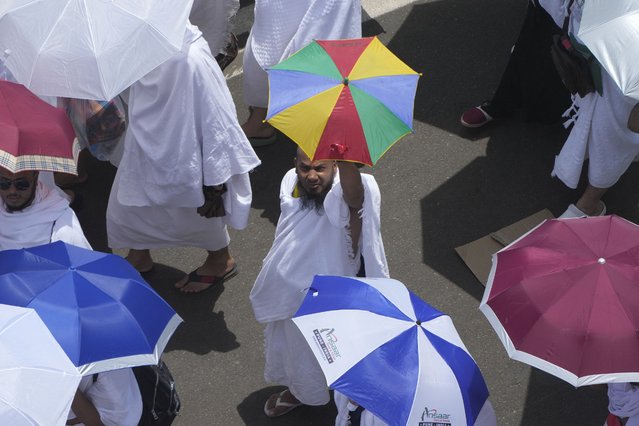 Muslim pilgrims move on their way to perform Friday Prayers at Namira Mosque in Arafat, on the second day of the annual hajj pilgrimage, near the holy city of Mecca, Saudi Arabia, Friday, July 8, 2022. (Photo by Amr Nabil/AP Photo) 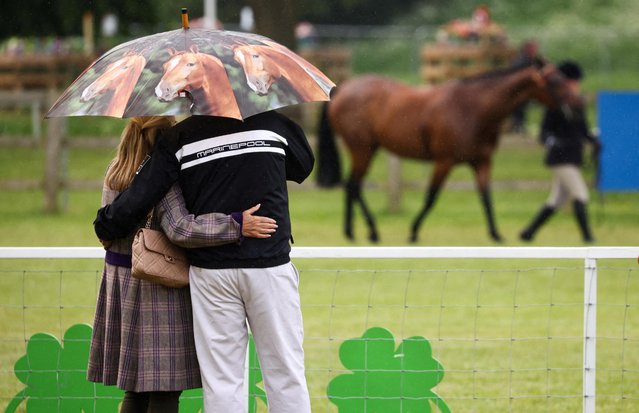 A couple shelters from a rainfall underneath a horse-themed umbrella during The Royal Windsor Horse Show in Windsor, Britain on May 15, 2022. (Photo by Henry Nicholls/Reuters) 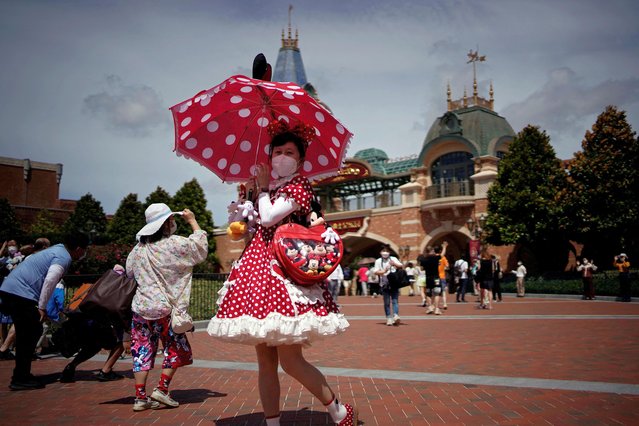 A visitor wearing a face mask poses at the Shanghai Disney Resort, as the Shanghai Disneyland theme park reopens after being shut for the coronavirus disease (COVID-19) outbreak, in Shanghai, China on June 30, 2022. (Photo by Aly Song/Reuters) 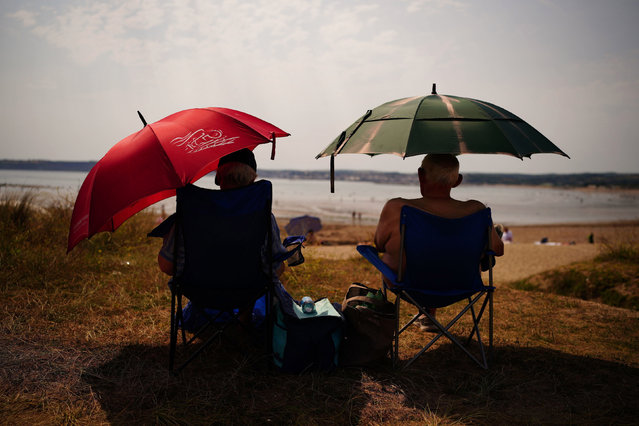 People sheltering under umbrellas from the sun in St Michael's Bay in Cornwall, England, Sunday July 17, 2022. The Met office has issued its first-ever “red warning” of extreme heat for Monday and Tuesday, when temperatures in southern England may reach 40 C (104 F) for the first time. (Photo by Ben Birchall/PA Wire via AP Photo) 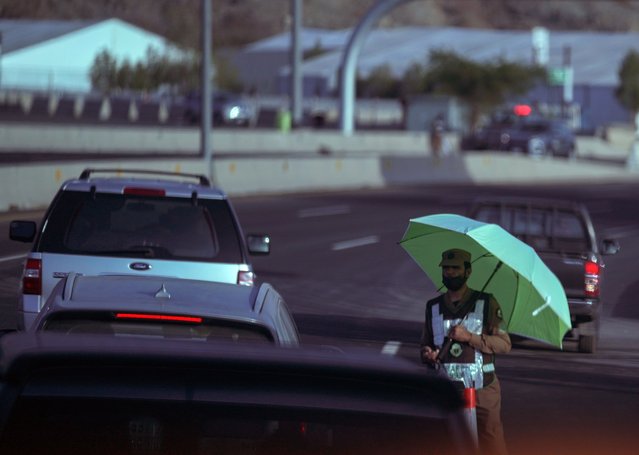 A Saudi traffic policeman raises his umbrella at a check point in the Arafat tent camp, in the Saudi Arabia's holy city of Mecca, Tuesday, July 5, 2022. Saudi Arabia is expected to receive one million Muslims to attend Hajj pilgrimage, which will begin on July 7, after two years of limiting the numbers because coronavirus pandemic. (Photo by Amr Nabil/AP Photo) 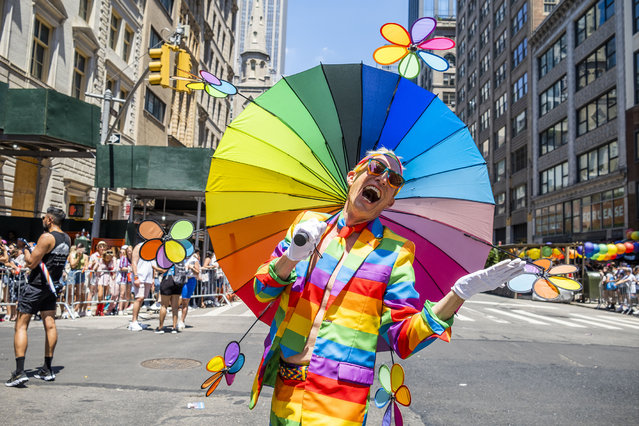 A reveller participates during the Pride Parade on June 26, 2022 in New York City. (Photo by Milo Hess/ZUMA Press Wire/Rex Features/Shutterstock) 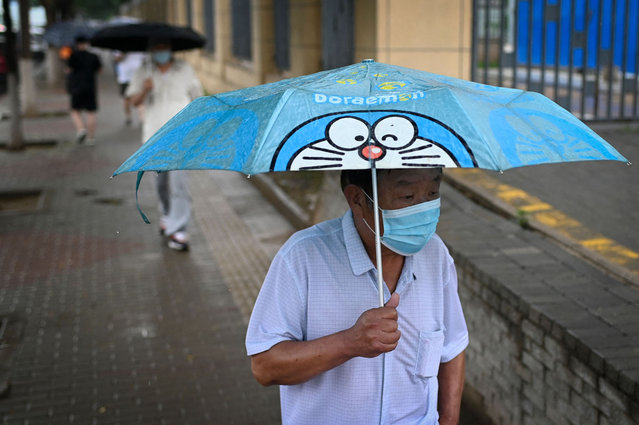 An elderly man walks along a street on a rainy day in Beijing on June 27, 2022. (Photo by Wang Zhao/AFP Photo) 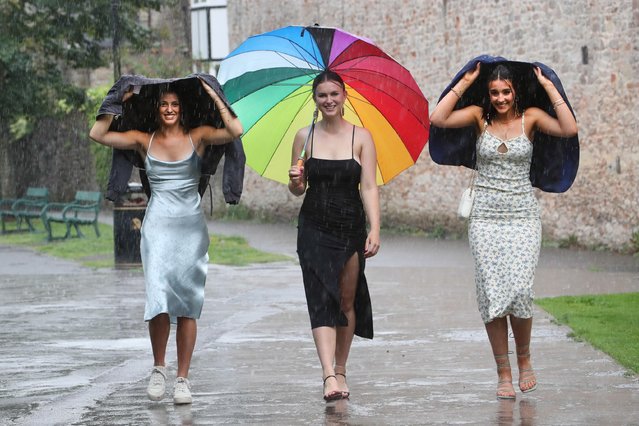 The Heavens opened as students from Wells Blue school year 13 pupils arrived at The Bishop's Palace in Wells, Somerset on June 30, 2022 for their end of year school prom. (Photo by Jason Bryant/Apex News) 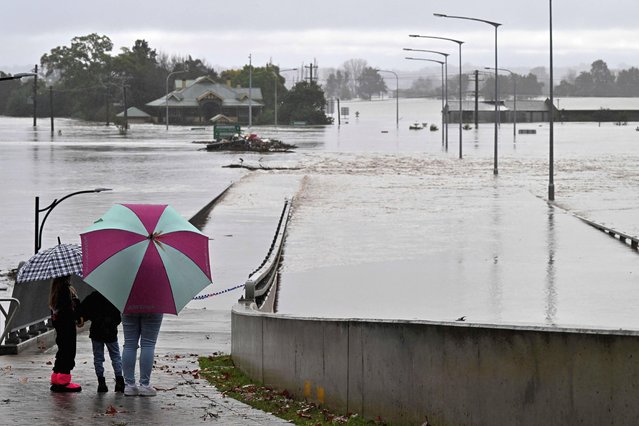 Residents look out toward flooded buildings next to the old Windsor Bridge along the overflowing Hawkesbury River in the northwestern Sydney suburb of Windsor on July 4, 2022. Rapidly rising rivers swamped swathes of rain-lashed Sydney on July 4, forcing thousands to flee “dangerous” floods as the city's largest dam spilled torrents of water. (Photo by Saeed Khan/AFP Photo) 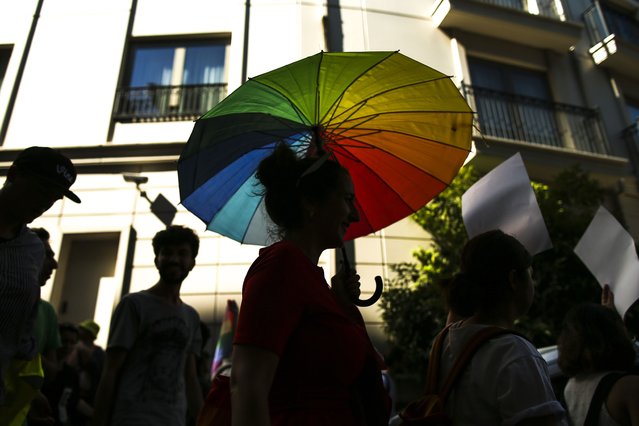 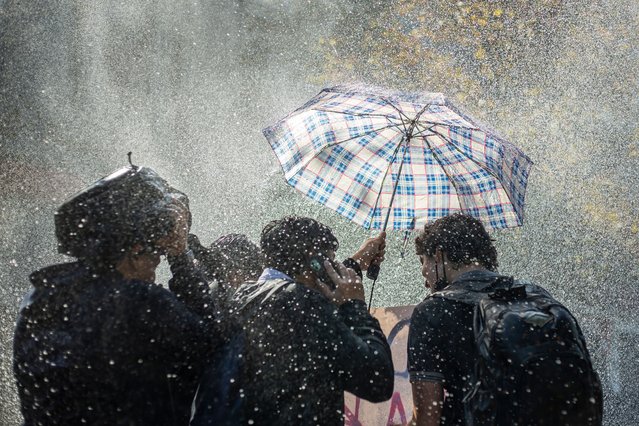 A group of students hide behind an umbrella, to repel the water thrown by the police cars on April 28, 2022 in Santiago de Chile. Amid at demonstration of secondary students from public education, demanding at the government, improvements in the infrastructure of educational establishments, more teachers, decent food, as well as the creation of a protocol for the integration of LGBTQ+ communities, among other demands. (Photo by Claudio Abarca Sandoval/NurPhoto via Getty Images) 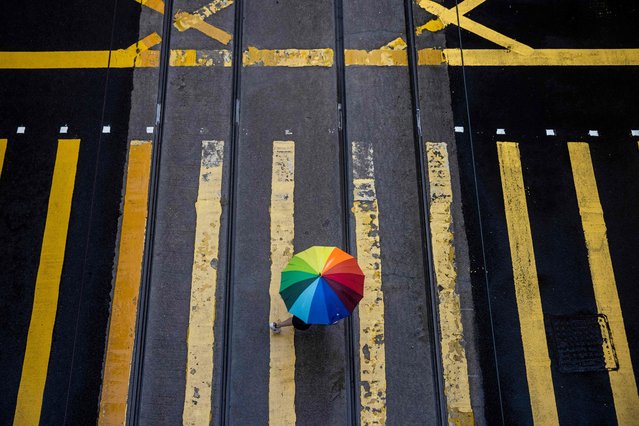 A pedestrian holding an umbrella crosses a street during a day of heavy rain in Hong Kong on June 8, 2022. (Photo by Isaac Lawrence/AFP Photo) 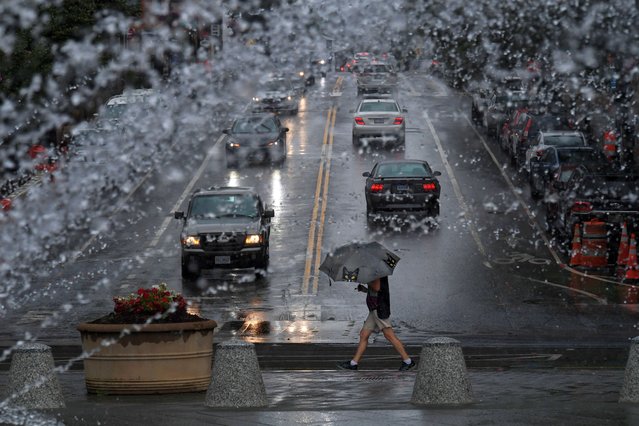 A water feature at Georgetown Waterfront Park appears to add to the already heavy rain as an umbrella clad pedestrian is framed by Wisconsin Ave. NW on Tuesday July 05, 2022 in Washington, DC. (Photo by Matt McClain/The Washington Post) 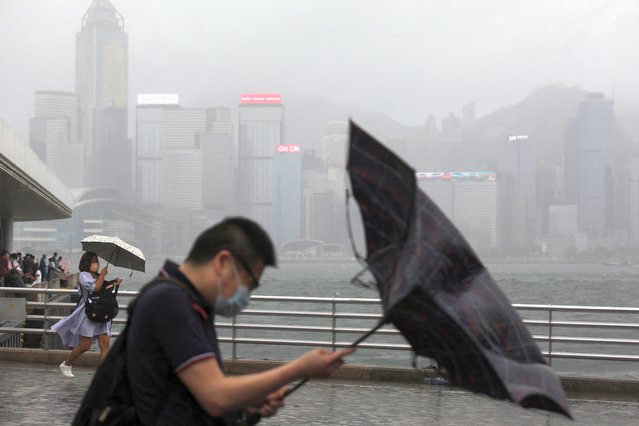 People hold umbrellas in the rain at a waterfront, amid a typhoon warning on the 25th anniversary of the former British colony's handover to Chinese rule, in Hong Kong, China on July 1, 2022. (Photo by Paul Yeung/Reuters)
Edit Del
29 Jul 2022 05:16:00, post received 0 comments
Publication archive:
←   →
Popular tags:
All tags
Last searches: