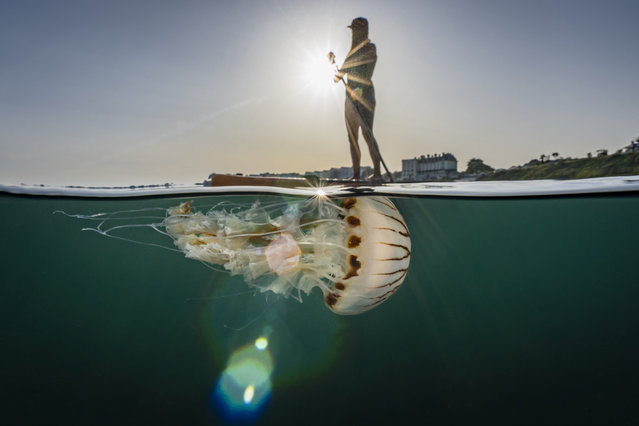 “A peaceful coexistence” by Falmouth photographer Lewis Jefferies, depicting Lewis's partner, Sammy, paddle boarding above a compass jellyfish with the sunshine beaming from behind her in July, 2021, in Falmouth Bay, Cornwall. It won first place in the 'British Waters Living Together' category of the national competition “Underwater Photographer of the Year 2022”. (Photo by Lewis Jefferies/South West News Service) 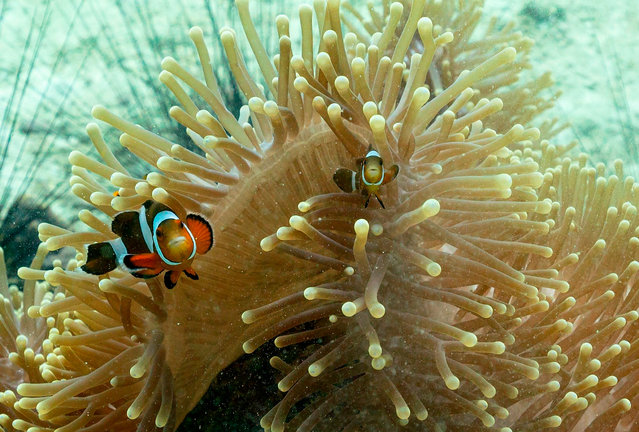 This underwater picture taken on November 18, 2020 shows ocellaris clownfish swimming on an anenome near Koh Lipe island, a popular diving area in the Andaman Sea, off the southern Thai province of Satun. (Photo by Lillian Suwanrumpha/AFP Photo) 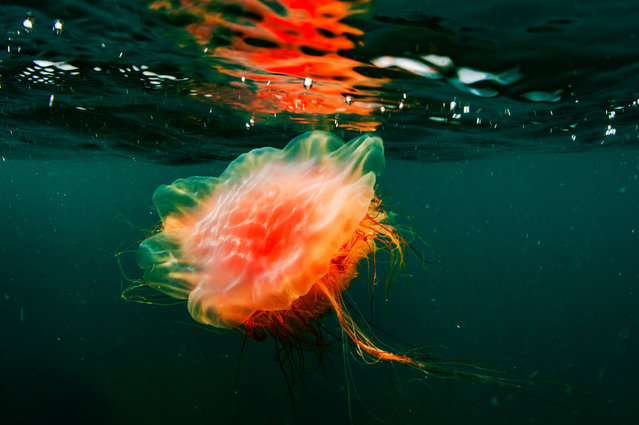 A giant jellyfish in Peter the Great Gulf in the Sea of Japan, Primorye Territory, Russia on June 29, 2021. (Photo by Yuri Smityuk/TASS) 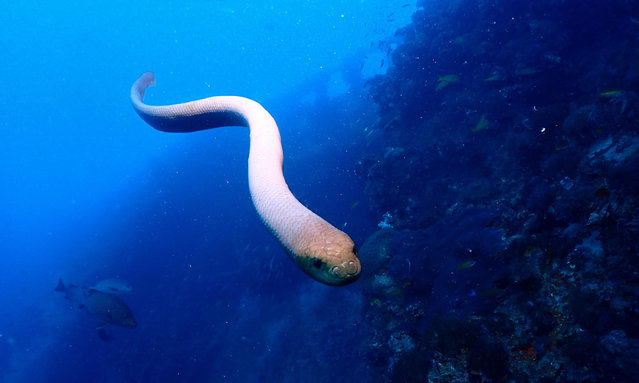 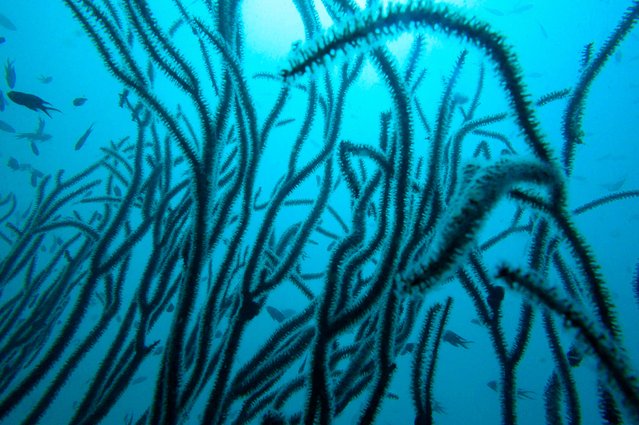 In this underwater photo taken October 23, 2020 fish swim over corals in Alhambra Rock, a popular diving area in the Gulf of Thailand, off Rayong province. (Photo by Romeo Gacad/AFP Photo) 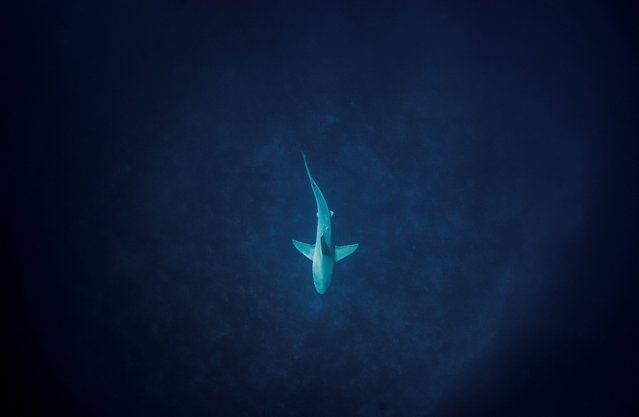 A shark cruises over the ocean bottom during a scuba trip with dive company Emerald Charters off Jupiter Inlet, Florida, U.S., May 18, 2022. (Photo by Sam Wolfe/Reuters) 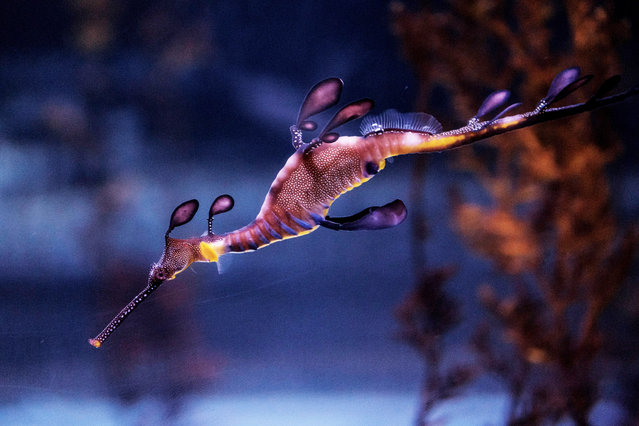 A common seadragon (Phyllopteryx taeniolatus) seen at a fishtank of the Poema del Mar Aquarium, in Las Palmas, Gran Canaria island, Spain, 06 October 2020. A total of 24 common seadragons, endemic to Australia, have been born at the aquarium to become the first ever common seadragon born and grewing in captivity in Europe. (Photo by Angel Medina G./EPA/EFE) 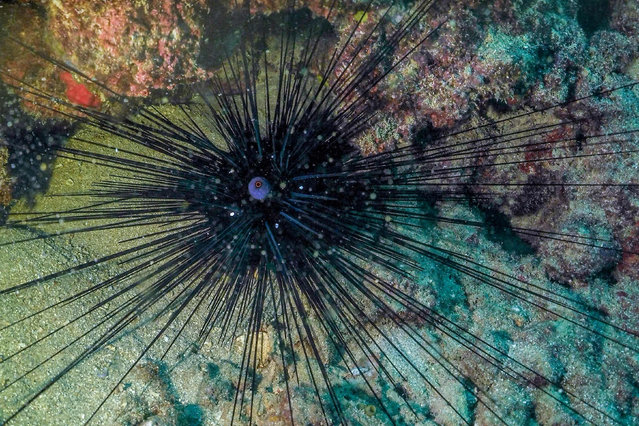 This picture taken on August 11, 2021 shows a view of a Diadema setosum long-spined sea urchin, typically native to Indo-Pacific waters and currently invading the eastern Mediteranean sea, some 17 meters underwater off the shore of Lebanon's northern coastal city of Qalamun. (Photo by Ibrahim Chalhoub/AFP Photo) 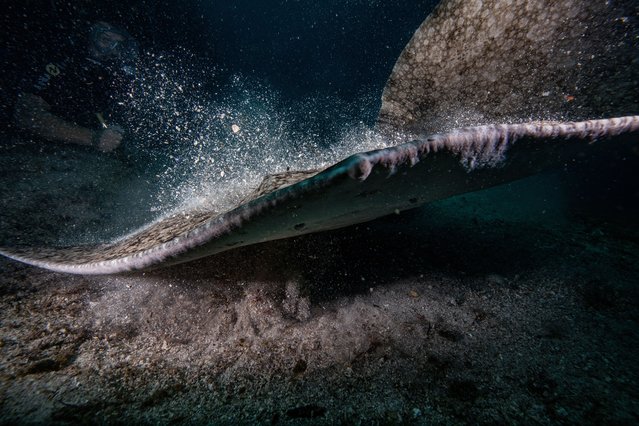 A stingray fish is seen at a diving site in Cesme district of Izmir, Turkey on September 30, 2020. (Photo by Sebnem Coskun/Anadolu Agency via Getty Images) 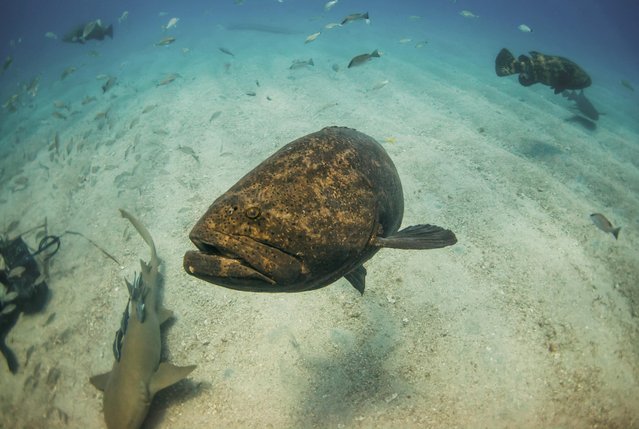 A goliath grouper swims during an outing with scuba company Emerald Charters off Jupiter Inlet, Florida, U.S., May 18, 2022. (Photo by Sam Wolfe/Reuters) 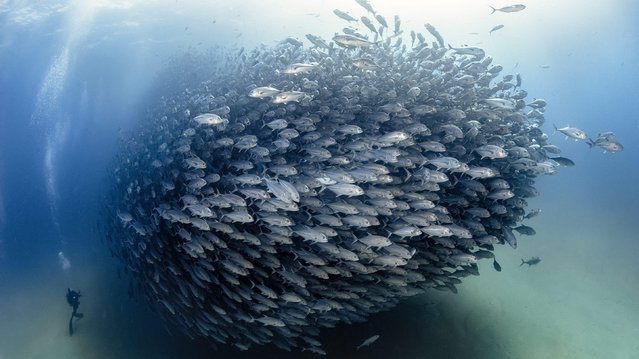 Divers explore a large shoal of bigeye trevally in Cabo Pulmo Marine National Park in Baja California Sur, Mexico. The fish swim together to protect themselves from predators. (Photo by David Salvatori/Solent News) 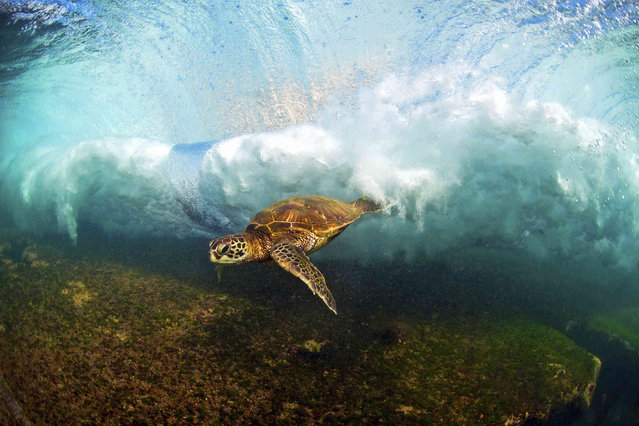 In this undated photo entitled “Close Call”, a Hawaiian green sea turtle swims through a breaking wave on the North Shore of Oahu near Haleiwa, Hawaii. The image appears in photographer Clark Little's new book, “The Art of Waves”. (Photo by Clark Little via AP Photo) 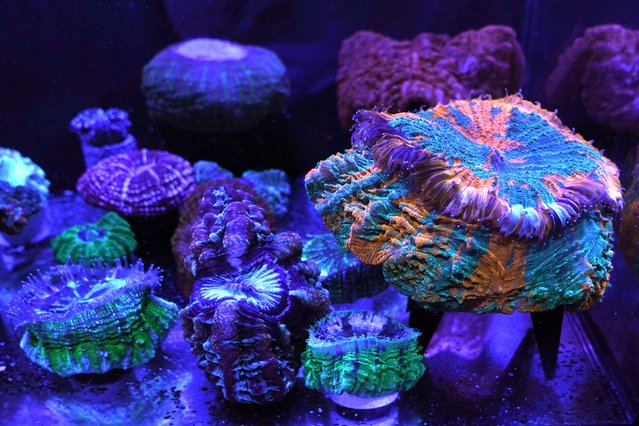 A variety of fluorescent and fleshy solitary stony corals are on display at the Coral Morphologic lab, Wednesday, March 2, 2022, in Miami. Coral Morphologic was founded by marine biologist Colin Foord and musician J.D. McKay to raise awareness about dying coral reefs, presenting the issue through science and art. (Photo by Lynne Sladky/AP Photo) 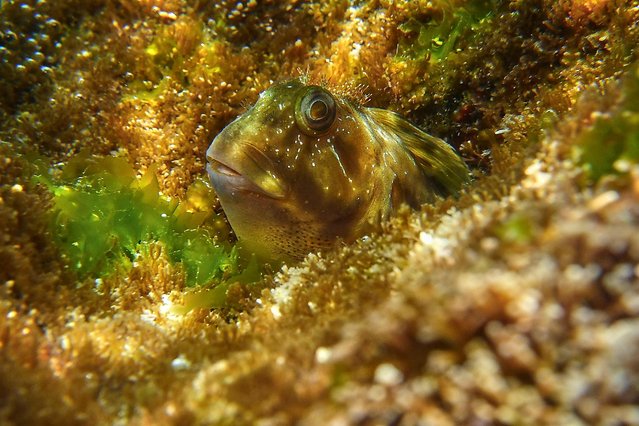 An underwater macro photo shows a Rock Goby fish (Gobius paganellus) hiding in a rock off the shore of the northern Lebanese coastal city of Batroun on May 27, 2022. (Photo by Ibrahim Chalhoub/AFP Photo) 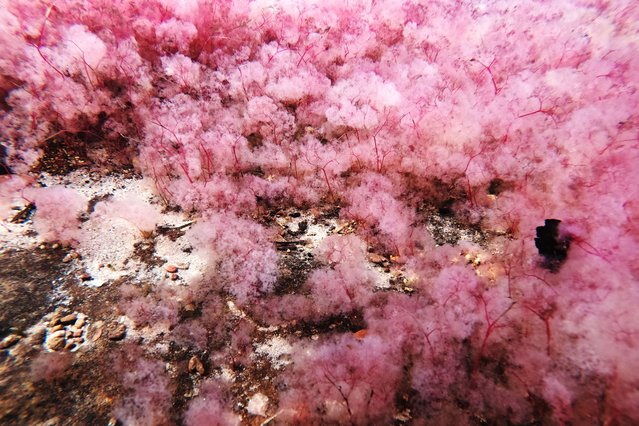 Photograph of the aquatic algae called “macarenias” –Rhyncholacis clavigera – that remain under the water of a river and give a pink color to the waters, in the rural area of San Jose de Guaviare, Colombia, 29 September 2021. The Colombian department of Guaviare, located at the confluence of the Orinoquia with the Amazon, found in nature tourism a way to open up horizons of progress and leave behind a past of violence due to the armed conflict. Thanks to the push of the locals and the support of the Government, European and Japanese tourists have begun to come to Guaviare attracted by unique experiences of its fascinating biodiversity, crystal clear water wells, majestic waterfalls and colorful rivers, beauties that were previously covered by the eyes of the world for the conflict. (Photo by Carlos Ortega/EPA/EFE)
Edit Del
15 Jun 2022 04:14:00, post received 0 comments
Publication archive:
←   →
Popular tags:
All tags
Last searches: