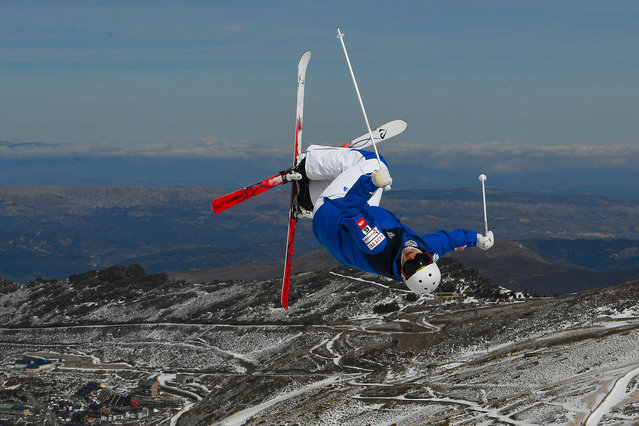 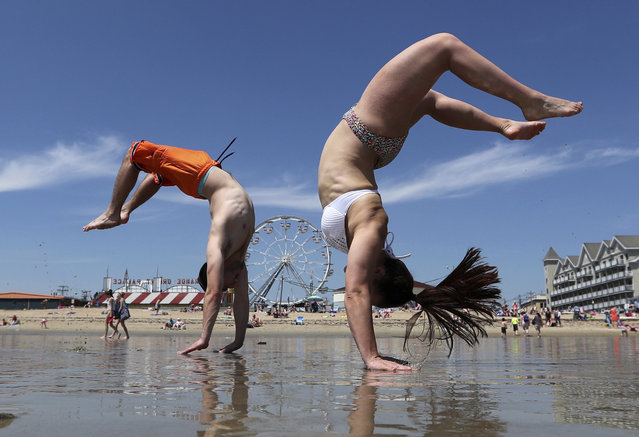 Dan Copeland, left, and Alex Morneau of Biddeford, Maine, former high school cheerleaders, perform back flips while enjoying the record breaking heat, Thursday, May 18, 2017, at Old Orchard Beach, Maine. The temperature climbed well into the 90s in many locations throughout the state. (Photo by Robert F. Bukaty/AP Photo) 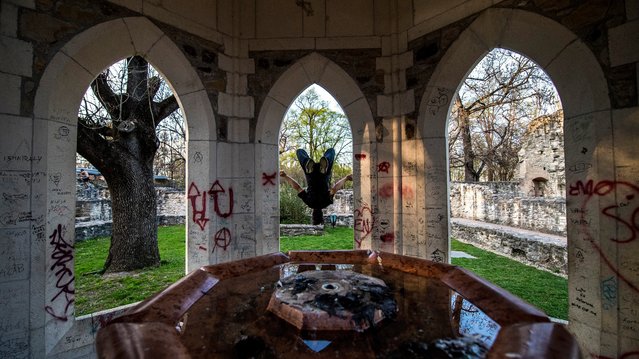 A man practices parkour tricks at the medieval ruins of Margaret Island in Budapest, Hungary, 30 March 2017. Practitioners’ aim to get from one point to another in a complex environment, without assistive equipment and in the fastest and most efficient way possible. (Photo by Zsolt Szigetvary/EPA) 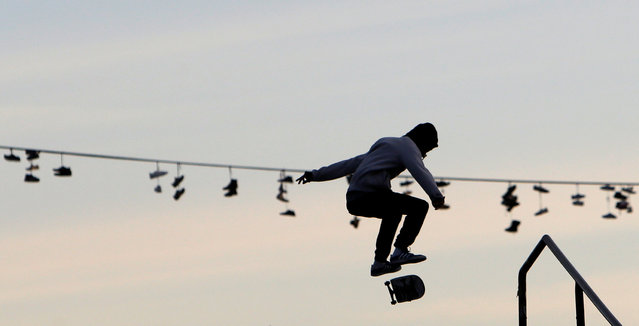 Shoes hang from a power line as a man rides his board in a park in Prague, Czech Republic, November 13, 2016. (Photo by David W. Cerny/Reuters) 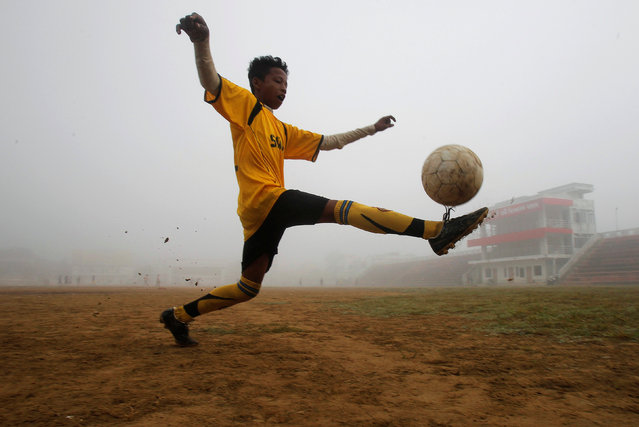 A boy kicks a soccer ball during a practice at a stadium on a foggy morning in Agartala, India, November 17, 2016. (Photo by Jayanta Dey/Reuters) 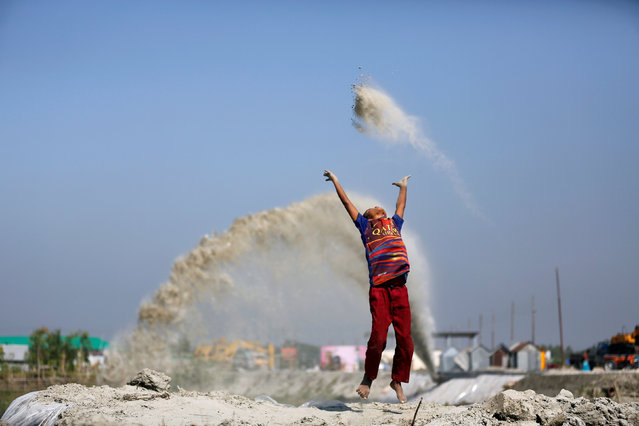 A boy plays with sand as his mother works in a nearby restaurant on the outskirt of Dhaka, Bangladesh, November 17, 2016. (Photo by Mohammad Ponir Hossain/Reuters) 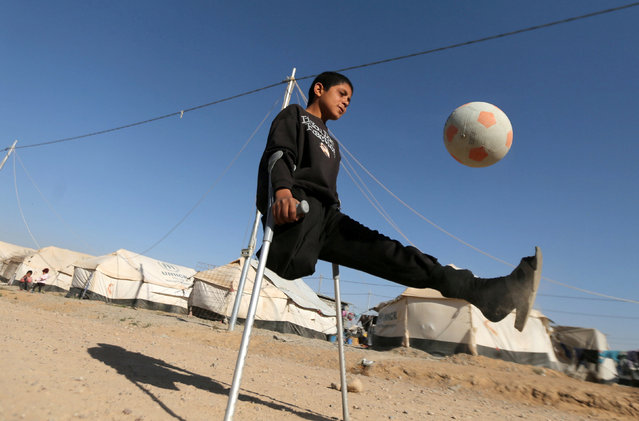 Displaced Iraqi boy Jasim Abudllah Jasim, 13, who according to his family lost his leg in an air strike in Baiji, plays football in Debaga camp, on the outskirts of Erbil, Iraq November 24, 2016. (Photo by Mohammed Salem/Reuters) 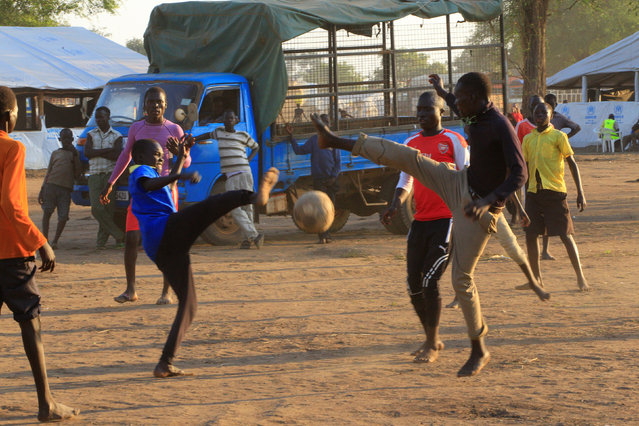 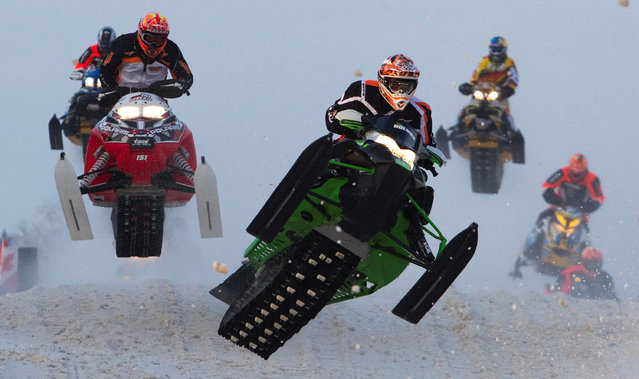 A rider on an Arctic Cat snowmobile leads others during the Canadian Snowcross Racing Association's (CSRA) Kawartha Cup in Lindsay, Ontario February 8, 2014. (Photo by Fred Thornhill/Reuters) 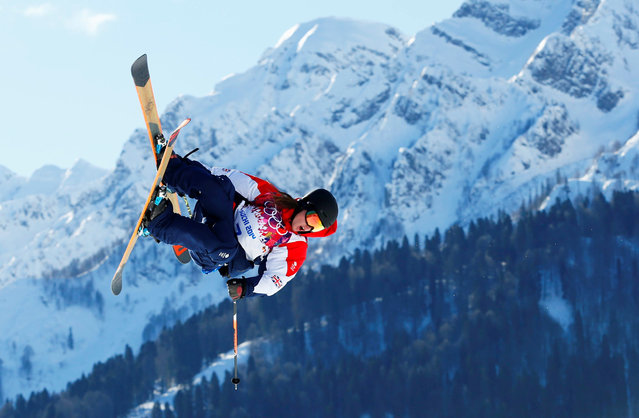 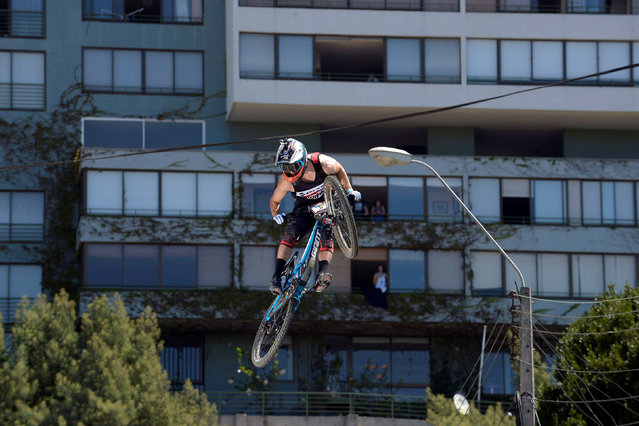 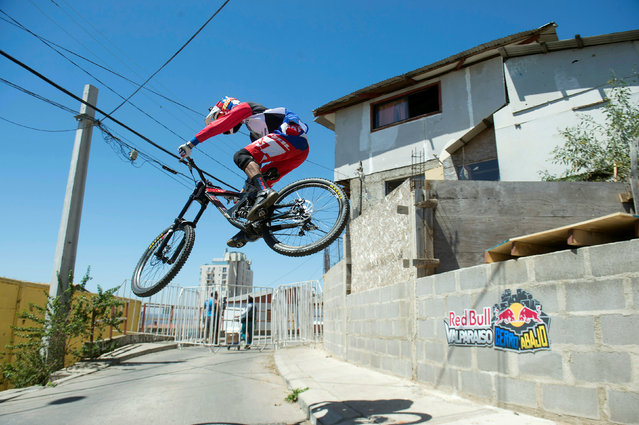 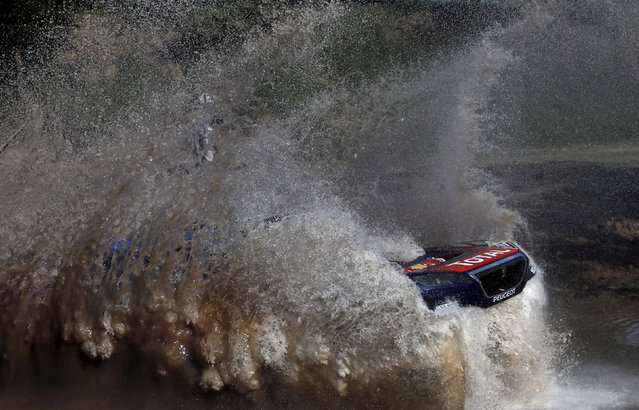 Sebastien Loeb of France drives his Peugeot through the water during the Buenos Aires-Rosario prologue stage of Dakar Rally 2016 in Arrecifes, Argentina, January 2, 2016. (Photo by Marcos Brindicci/Reuters) 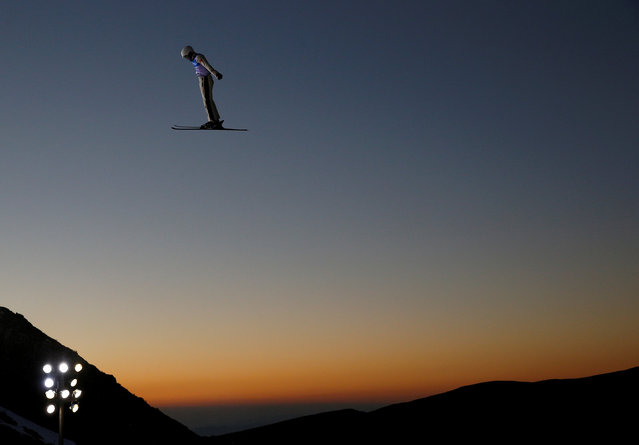 Qi Guangpu of China performs an aerial as he trains during the Snowboarding and Freestyle Skiing World Championships in Sierra Nevada, Spain, March 9, 2017. (Photo by Paul Hanna/Reuters) 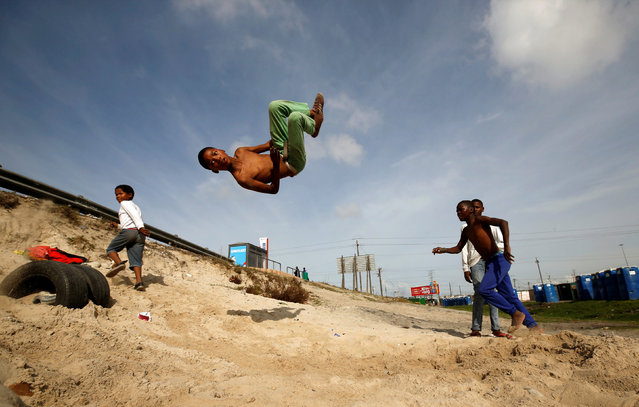 Youths somersault over old tyres in the Khayelitsha township, near Cape Town, South Africa May 25, 2017. (Photo by Mike Hutchings/Reuters) 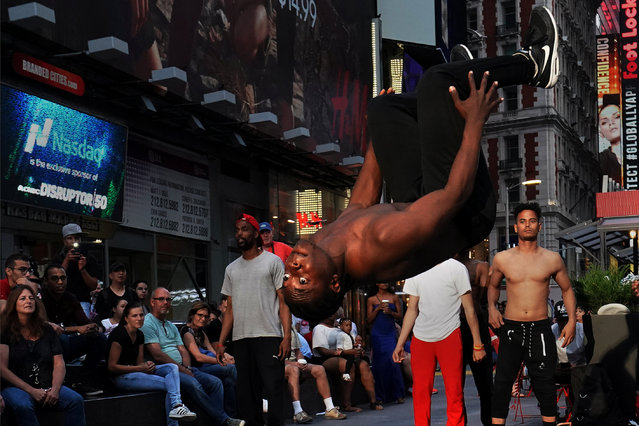 A break dancer does a flip in Times Square in the Manhattan borough of New York City, New York, U.S. June 1, 2017. (Photo by Carlo Allegri/Reuters) 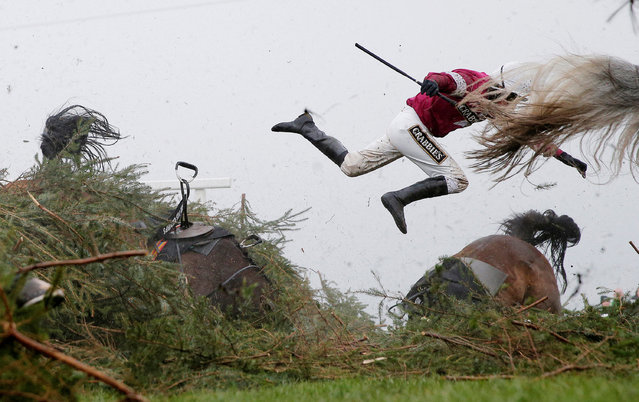 Jockey Nina Carberry flies off her horse Sir Des Champs as they fall at The Chair fence during the Grand National steeplechase during day three of the Grand National Meeting at Aintree Racecourse on April 9th 2016 in Liverpool, England. (Photo by Tom Jenkins/Reuters/The Guardian/Courtesy of World Press Photo Foundation) 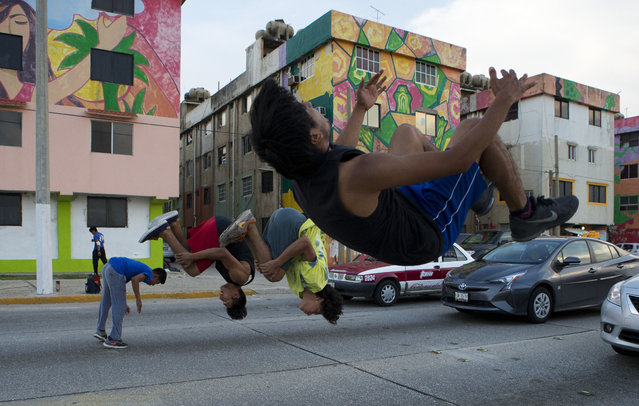 In this June 30, 2017 photo, a group of boys who practice parkour do tricks at a traffic light to earn money from drivers, in Coatzacoalcos, Veracruz State, Mexico. The fresh wave of violence has touched regions of Mexico that were long seen as peaceful. (Photo by Rebecca Blackwell/AP Photo) 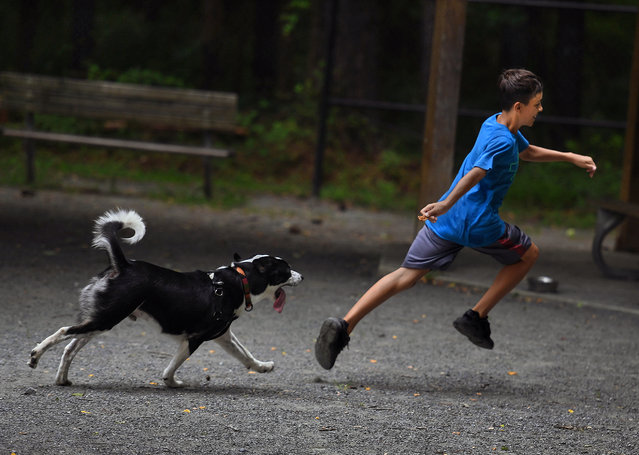 Nilson Molina (age 12 of Silver Spring) gives his pooch Rocky a good work out as Rocky chases the dog treat that Nilson is holding. After a few round trips in the park they both used the water hose provided by the park. -The Wheaton Dog Park is popular even on very warm days because it has lots of shade and a water hose and several community dog bowls. (Photo by Michael S. Williamson/The Washington Post) 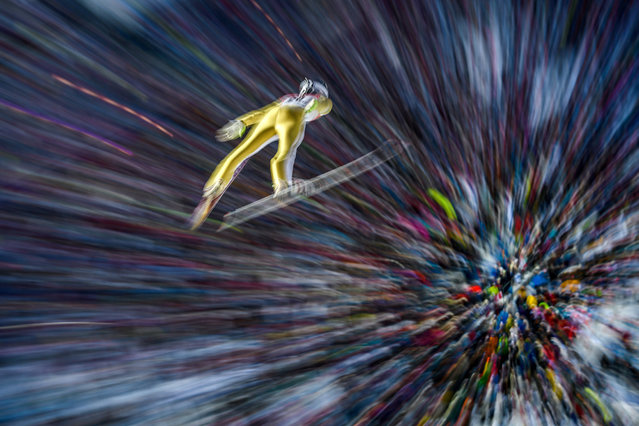 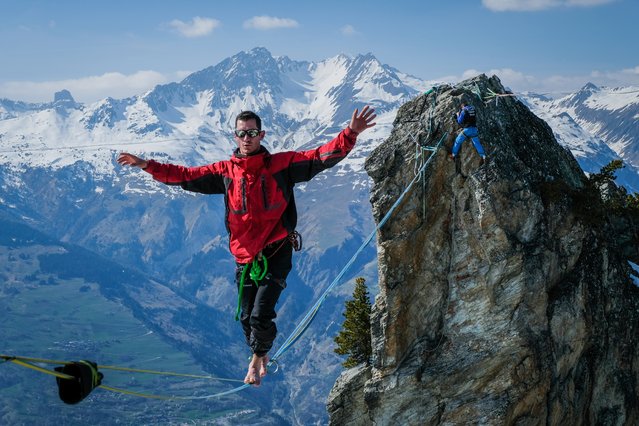 A slackliner walks across the rope bare foot in Les Arcs Ski Resort, French Alps on 7 April 2017. Balancing on a 2cm elastic strap, the best tightrope walkers in the world show off their skills at an altitude of 2000m. Over the breathtaking view of Mont Blanc, Winter Festislack is an event held by ski resort, Les Arcs, in the French Alps. Every March through to April, hundreds of highliners gather to test their balance and composure as they walk across slacklines dozens of feet high. French photographer Fred Marie captured this year’s Festislack, and has been doing so for many years. (Photo by Fred Marie/Barcroft Images)
Edit Del
13 Jul 2017 07:59:00, post received 0 comments
Publication archive:
←   →
Popular tags:
All tags
Last searches: