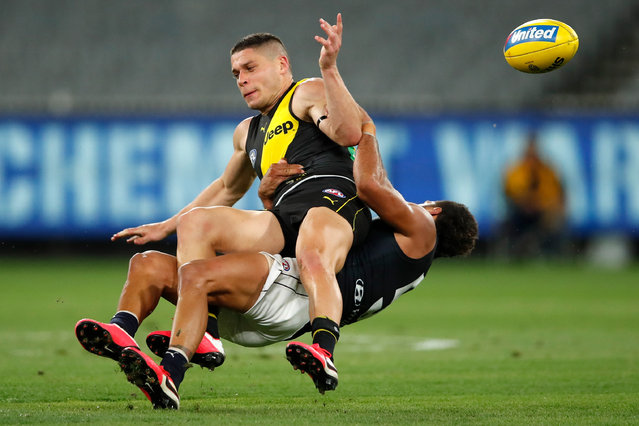 Dion Prestia of the Tigers is tackled by Sam Petrevski-Seton of the Blues during the 2020 AFL Round 01 match between the Richmond Tigers and the Carlton Blues at the Melbourne Cricket Ground on March 19, 2020 in Melbourne, Australia. (Photo by Dylan Burns/AFL Photos via Getty Images) 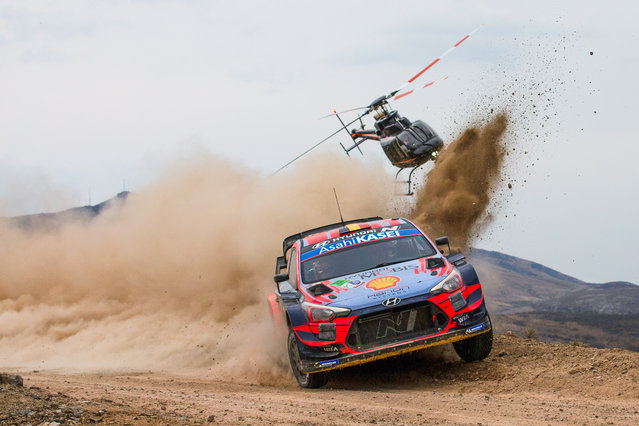 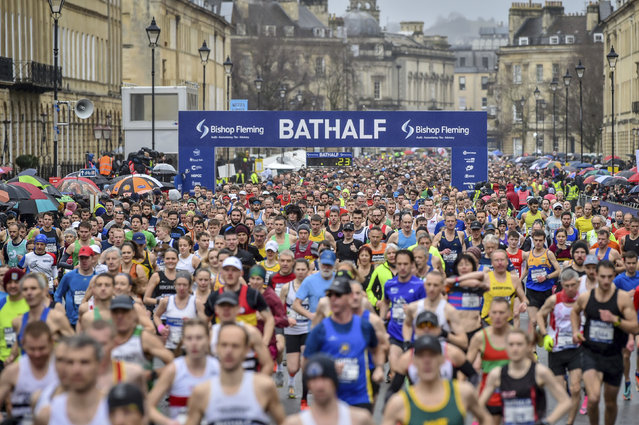 Runners at the start of the race during the Bath Half Marathon in Bath, England, Sunday, March 15, 2020. Despite coronavirus concerns, the half marathon has not been cancelled. For most people, the new coronavirus causes only mild or moderate symptoms. For some it can cause more severe illness, especially in older adults and people with existing health problems. (Photo by Ben Birchall/PA Wire via AP Photo) 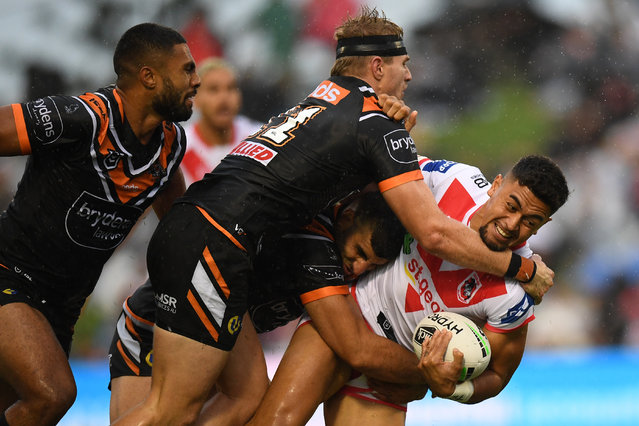 Timoteo Lafai of the Dragons is tackled by Alex Twal and Luke Garner of the Tigers during the Round One NRL match between St George Illawarra Dragons and Wests Tigers at WIN Stadium in Wollongong, Sunday, March 15, 2020. (Photo by Dean Lewins/AAP Image) 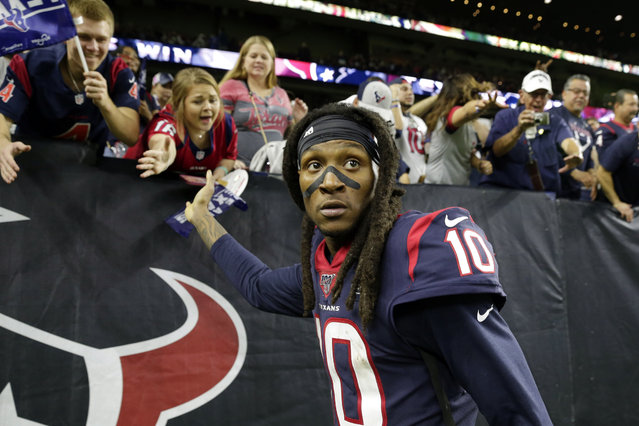 In this January 4, 2020, file photo, Houston Texans wide receiver DeAndre Hopkins celebrates with fans after an NFL wild-card playoff football game against the Buffalo Bills in Houston. The Arizona Cardinals have acquired three-time All-Pro receiver DeAndre Hopkins in a trade that will send running back David Johnson and draft picks to the Houston Texans, a person familiar with the situation told The Associated Press. The person spoke to the AP on condition of anonymity Monday, March 16, 2020, because the trade hasn't been officially announced. (Photo by Michael Wyke/AP Photo) 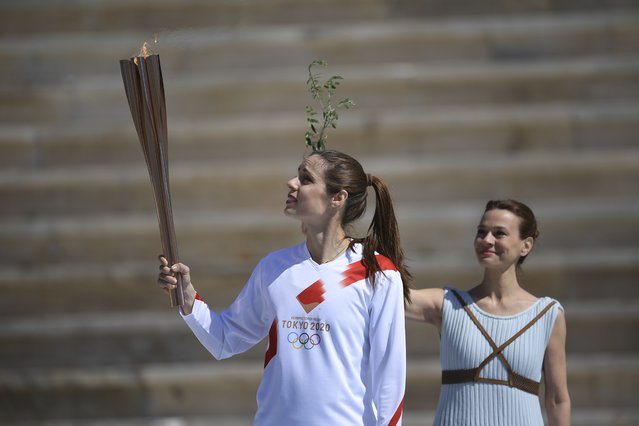 Katerina Stefanidi, Greek Olympic Champion in pole vault, holds the Olympic torch during the Olympic flame handover ceremony for the 2020 Tokyo Summer Olympics, in Athens, Thursday, March 19, 2020. The ceremony was held behind closed doors and with the presence of few members of the media because of fears over the new coronavirus. (Photo by Aris Messinis/Pool via AP Photo) 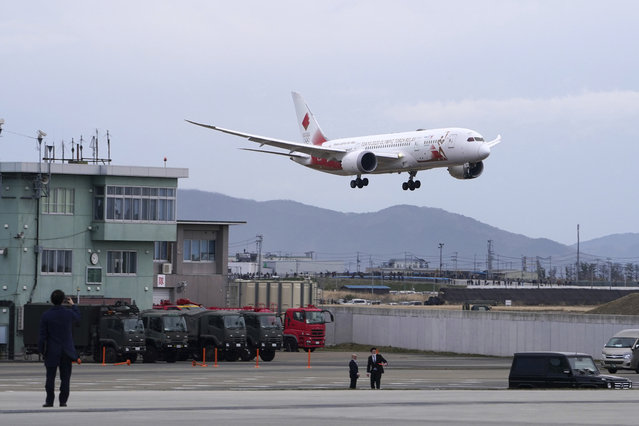 A plane arrives before Olympic Flame Arrival Ceremony at Japan Air Self-Defense Force Matsushima Base in Higashimatsushima in Miyagi Prefecture, north of Tokyo, Friday, March 20, 2020. The Olympic flame from Greece is set to arrive in Japan even as the opening of the the Tokyo Games in four months is in doubt with more voices suggesting the games should to be postponed or canceled because of the worldwide virus pandemic. (Photo by Eugene Hoshiko/AP Photo) 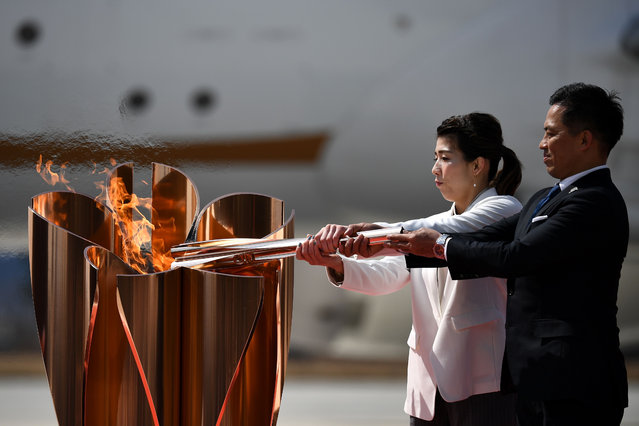 Japanese three-time Olympic gold medallists Saori Yoshida (L) and Tadahiro Nomura (R) light a Tokyo 2020 Olympic cauldron with the Olympic flame, after transporting the flame from Greece, at the Japan Air Self-Defense Force Matsushima Base in Higashimatsushima, Miyagi prefecture on March 20, 2020. The Olympic flame arrives in Japan on March 20, with what should have been a joyous celebration dramatically downscaled as doubts grow over whether the Tokyo Games can go ahead during the coronavirus pandemic. (Photo by Philip Fong/AFP Photo) 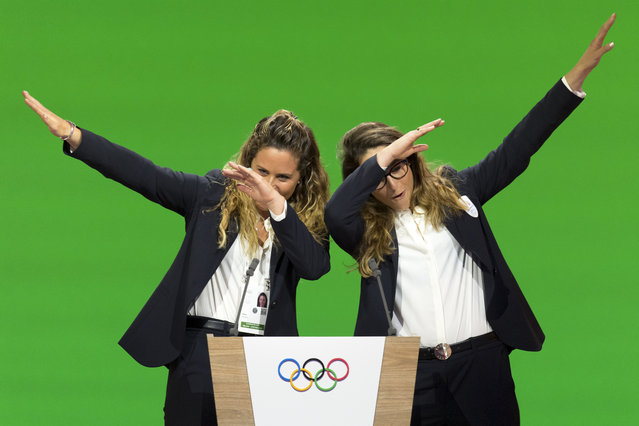 In this Monday, June 24, 2019 filer, Italian snowboarder Michela Moioli, left, and Italian skier Sofia Goggia, right, dab after speaking during the presentation of the Milan-Cortina candidate cities the first day of the 134th Session of the International Olympic Committee (IOC), in Lausanne, Switzerland. Eight months later Goggia and Moioli feel like their worlds are crumbling apart as they are locked inside their homes just a few miles apart in the Bergamo area of northern Italy that is struggling to keep up with the coronavirus, they are surrounded by death and despair. (Photo by Laurent Gillieron/Keystone via AP Photo/File) 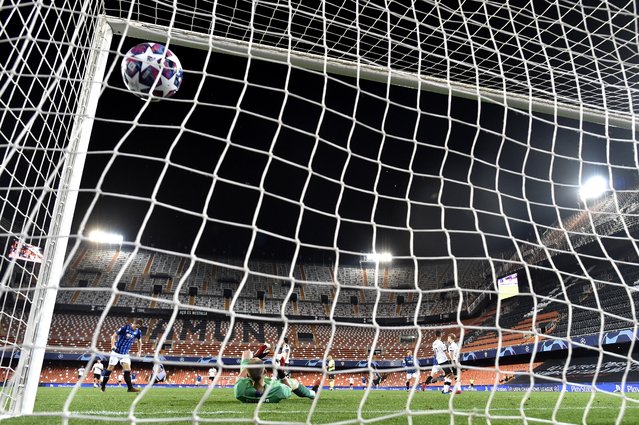 Atalanta's Josip Ilicic scores his side's third goal during the Champions League round of 16 second leg soccer match between Valencia and Atalanta in Valencia, Spain, Tuesday March 10, 2020. The match is being in an empty stadium because of the coronavirus outbreak. (Photo by UEFA via AP Photo) 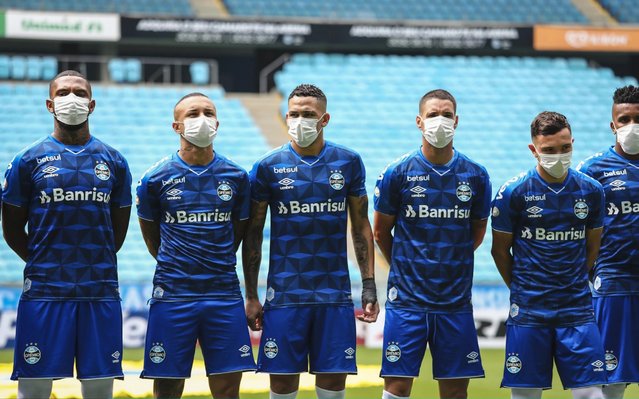 Players of Gremio wearing masks before the match between Gremio and Sao Luiz as part of the Rio Grande do Sul State Championship 2020, to be played behind closed doors at Arena do Gremio Stadium, on March 15, 2020 in Porto Alegre, Brazil. The Government of the State of Rio Grande do Sul issued a list of new guidelines to help prevent the spread of the Coronavirus which included games played with closed doors and no public. According to the Ministry of Health, as of Saturday, March 14, Brazil had 121 confirmed cases of coronavirus. (Photo by Lucas Uebel/Getty Images)
Edit Del
23 Mar 2020 00:05:00, post received 0 comments
Publication archive:
←   →
Popular tags:
All tags
Last searches: