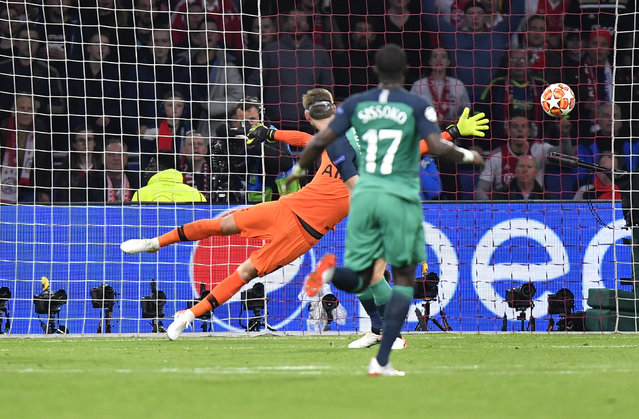 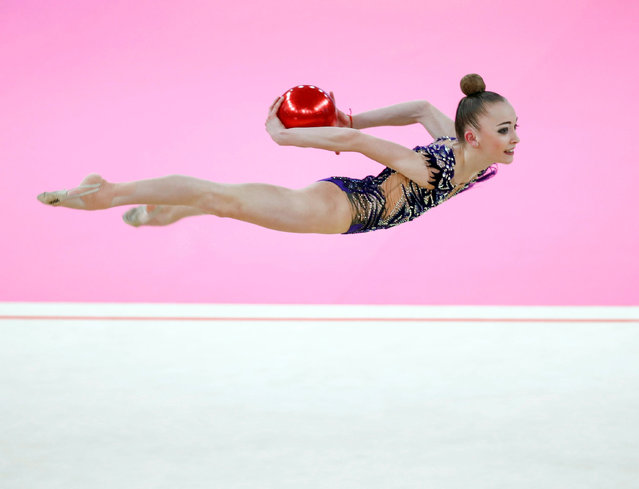 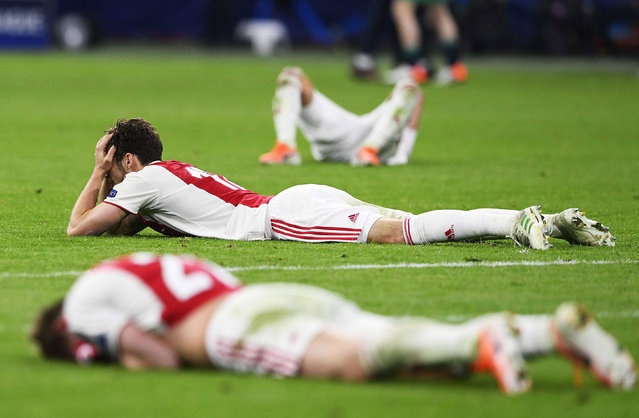 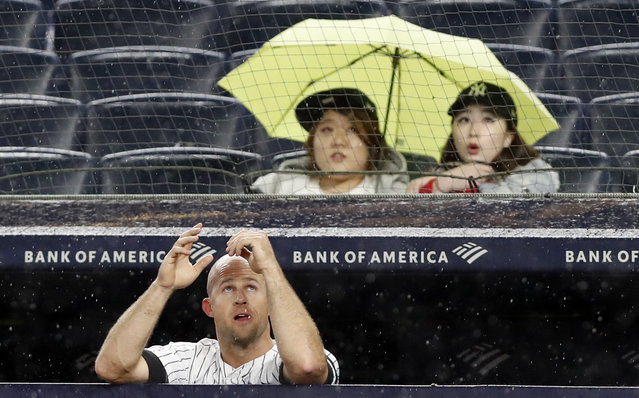 New York Yankees' Brett Gardner looks up at the sky as rain falls during the sixth inning of the team's baseball game against the Seattle Mariners, Tuesday, May 7, 2019, in New York. (Photo by Kathy Willens/AP Photo) 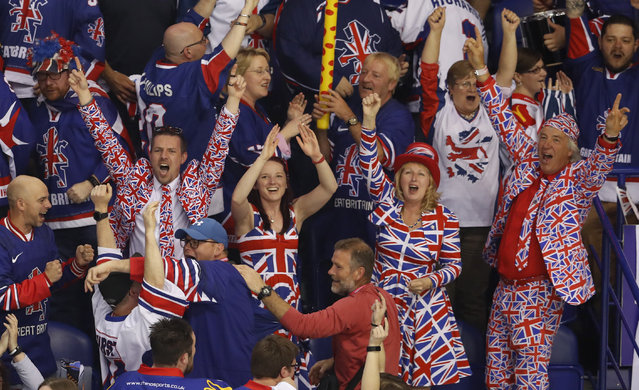 Fans of Great Britain celebrate after their team scored their first goal during the Ice Hockey World Championships group A match between Germany and Great Britain at the Steel Arena in Kosice, Slovakia, Saturday, May 11, 2019. (Photo by Petr David Josek/AP Photo) 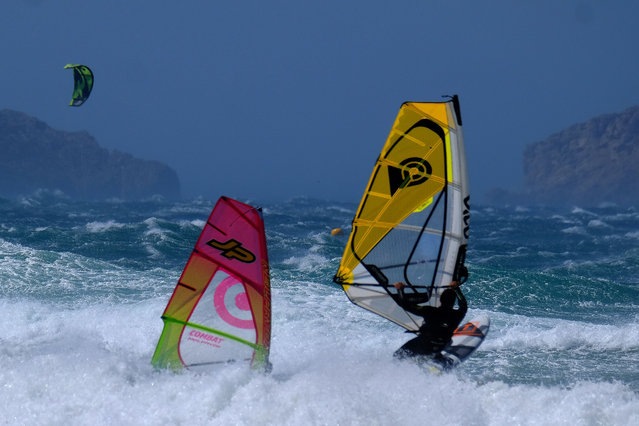 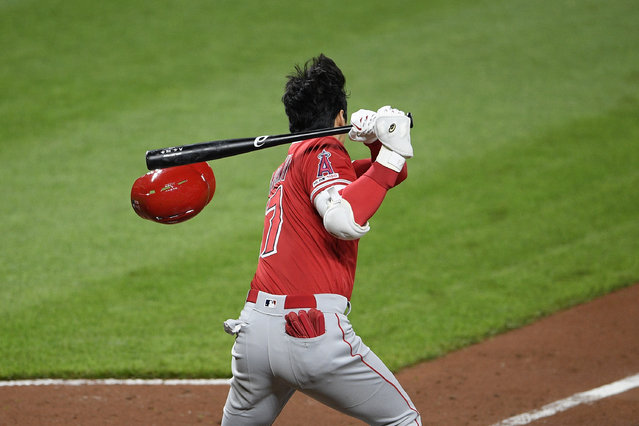 Los Angeles Angels' Shohei Ohtani, of Japan, loses his helmet as he grounds out during the sixth inning of a baseball game against the Baltimore Orioles, Friday, May 10, 2019, in Baltimore. (Photo by Nick Wass/AP Photo) 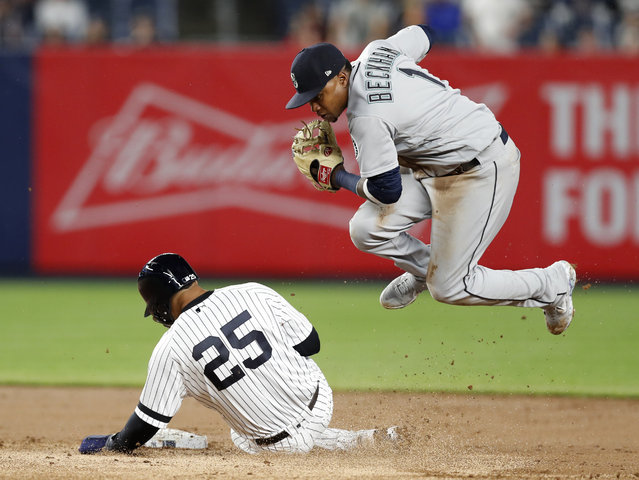 Seattle Mariners shortstop Tim Beckham (1) leaps after forcing out New York Yankees Gleyber Torres (25) after a grounder by Gio Urshela during the seventh inning of a baseball game Tuesday, May 7, 2019, in New York. (Photo by Kathy Willens/AP Photo) 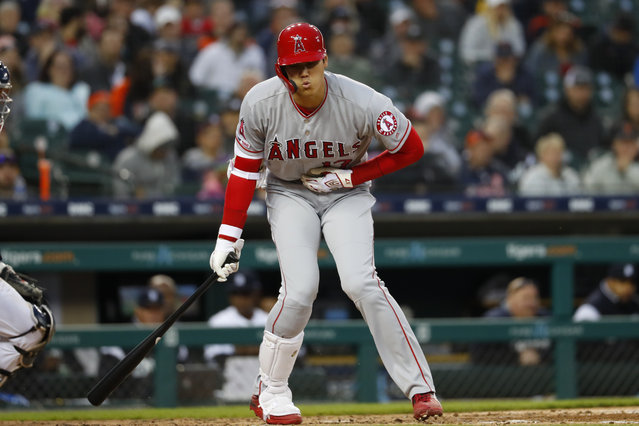 Los Angeles Angels' Shohei Ohtani reacts after a foul ball hit him during the fifth inning of the team's baseball game against the Detroit Tigers in Detroit, Tuesday, May 7, 2019. (Photo by Paul Sancya/AP Photo) 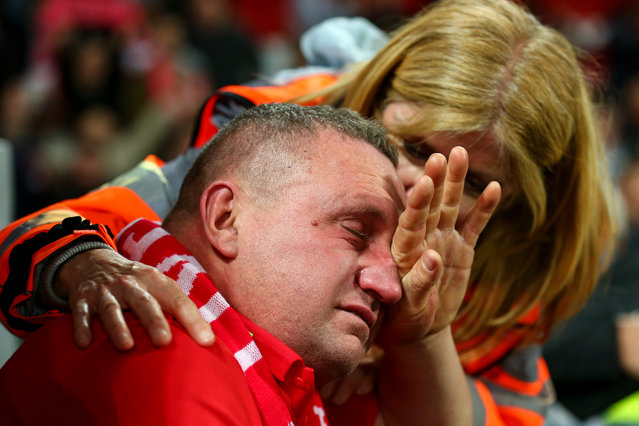 A tearful fan of Liverpool is consoled by a steward at full time during the UEFA Champions League Semi Final second leg match between Liverpool and Barcelona at Anfield on May 7, 2019 in Liverpool, England. (Photo by Robbie Jay Barratt – AMA/Getty Images) 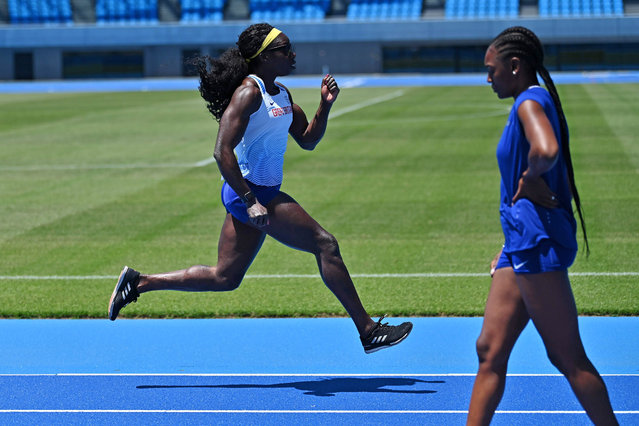 British athletes Anyika Onuora (L) and Perri Shakes-Drayton train with the new mixed 400-metre relay team at Todoroki stadium in Kawasaki on May 8, 2019. The new mixed 4x400m relay race, with teams of two men and two women, is poised to make its Olympic debut at Tokyo 2020 as part of a drive by organisers to make the sport more inclusive. (Photo by Charly Triballeau/AFP Photo) 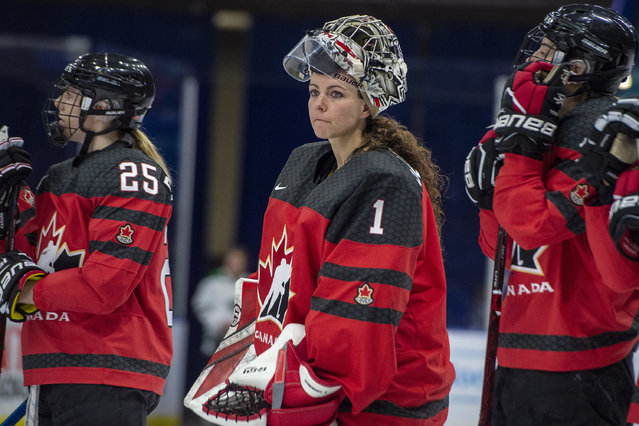 In this November 10, 2018, file photo, Canada goaltender Shannon Szabados watches as U.S. players celebrate during the Four Nations Cup hockey gold-medal game in Saskatoon, Saskatchewan. A person with direct knowledge of the decision tells The Associated Press that the owner of the Buffalo Beauts has given up control of the National Women's Hockey League franchise. The person spoke to The AP on Wednesday, May 8, 2019, on the condition of anonymity because the decision won't be announced until later in the day. This further jeopardizes the league's future as it struggles to keep its five franchises afloat, and without the support of the world's top players. On Thursday, the NWHL learned it will have difficulty restocking its rosters after more than 200 of the world's top female players pledged they'll not compete professionally in North America next season. The group included a vast majority of Beauts players, including U.S. national team defenseman Emily Pfalzer and Canadian national team goalie Shannon Szabados. (Photo by Liam Richards/The Canadian Press via AP Photo/File) 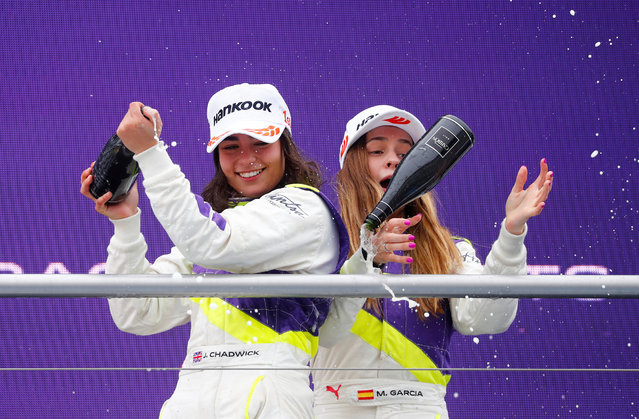 Marta Garcia (R) of Spain loses the champgane bottle standing on the podium next to winner Jamie Chadwick of Great Britain after the first race of the W Series at Hockenheimring on May 04, 2019 in Hockenheim, Germany. W Series aims to give female drivers an opportunity in motorsport that hasn’t been available to them before. The first race of the series, which encompasses six rounds on the DTM support programme, is at the Hockenheimring on May 3rd and 4th. (Photo by Kai Pfaffenbach/Reuters) 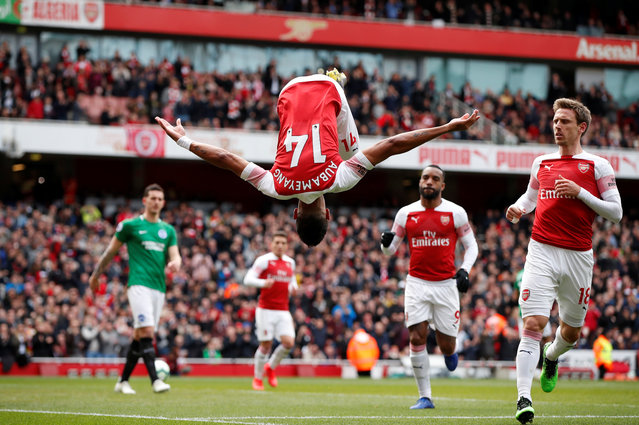