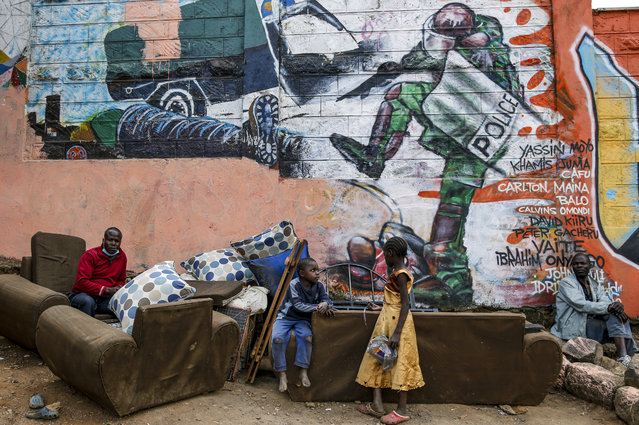 In this June 9, 2020, file photo, Kenyan children and men are photographed in the Kibera slum in Nairobi, Kenya, in front of a new mural showing an incident in 2016 when a Kenyan riot policeman repeatedly kicked a protester. The killing of George Floyd in the United States has raised awareness over police violence in South Africa and Kenya. (Photo by Brian Inganga/AP Photo/File) 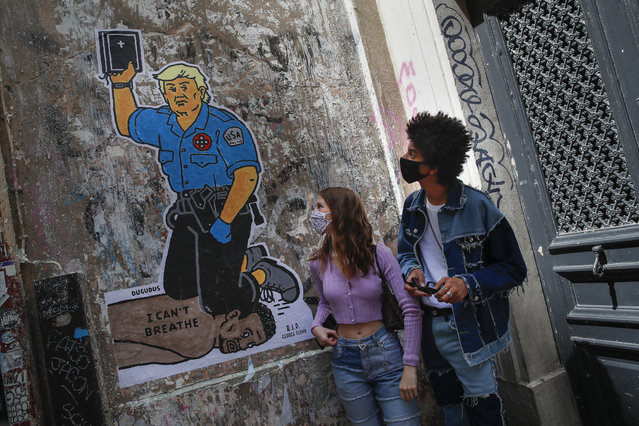 People pose next to an artwork by French artist Dugudus depicting U.S. President Donald Trump as a police officer pressing his knee into the neck of George Floyd while holding a bible, in Paris, France, Saturday, June 6, 2020. (Photo by Francois Mori/AP Photo) 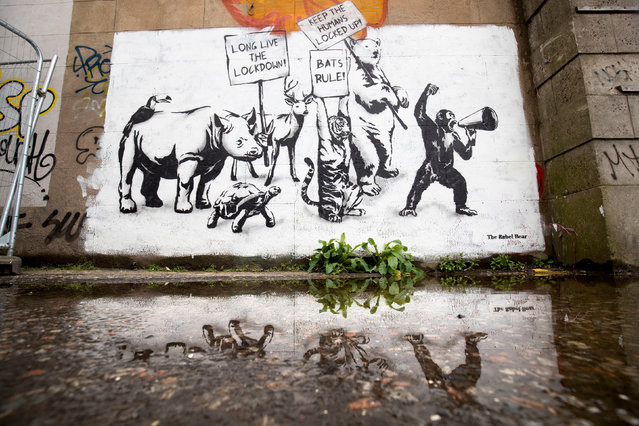 A new piece of street art by The Rebel Bear has appeared on a wall in Leith, Edinburgh on June 3, 2020, as Scotland is moving into phase one of the Scottish Government's plan for gradually lifting lockdown. (Photo by Jane Barlow/PA Images via Getty Images) 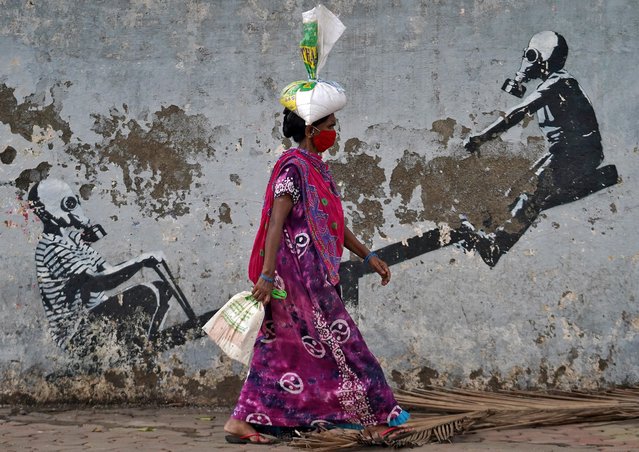 A woman wearing a protective face mask walks past a graffiti, after authorities eased lockdown restrictions that were imposed to slow the spread of the coronavirus disease (COVID-19), in Mumbai, India, June 12, 2020. (Photo by Hemanshi Kamani/Reuters) 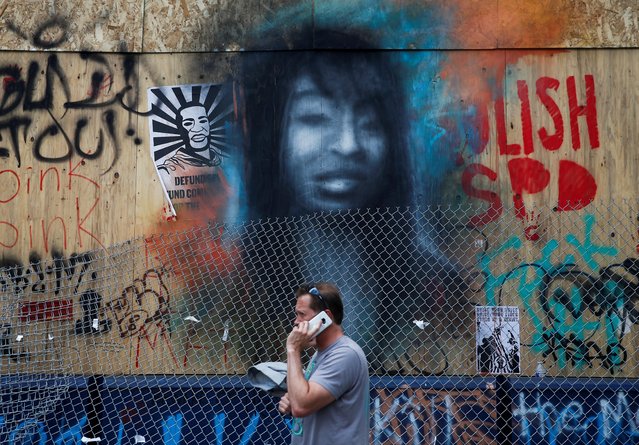 A depiction of Charleena Lyles, a Black woman killed by Seattle Police in 2017, is seen on plywood outside the Seattle Police Department's East Precinct at the CHAZ/CHOP zone during continued protests against racial inequality and for defunding of police in the aftermath of the death in Minneapolis police custody of George Floyd, in Seattle, Washington, U.S. June 14, 2020. (Photo by Lindsey Wasson/Reuters) 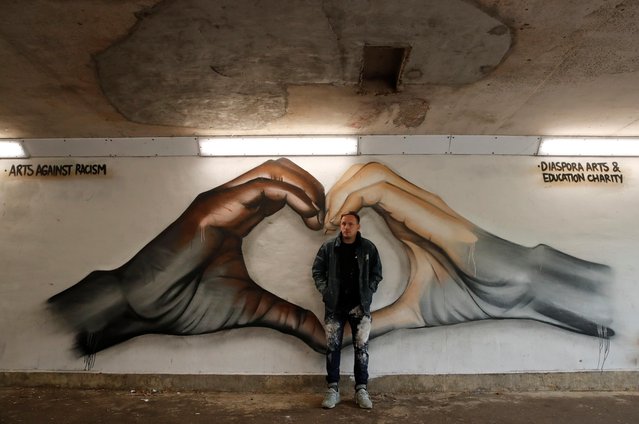 Street artist Nathan Murdoch poses with his art against racism mural in a tunnel in Peterborough, following the death of George Floyd who died in police custody in Minneapolis, Peterborough, Britain, June 10, 2020. (Photo by Andrew Couldridge/Reuters) 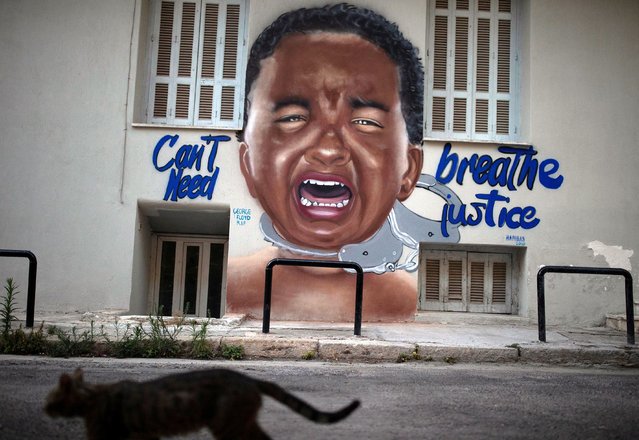 A cat passes by a mural responding to the death in Minneapolis police custody of George Floyd by Greek visual artist Hambas, in Athens, Greece, June 16, 2020. (Photo by Alkis Konstantinidis/Reuters) 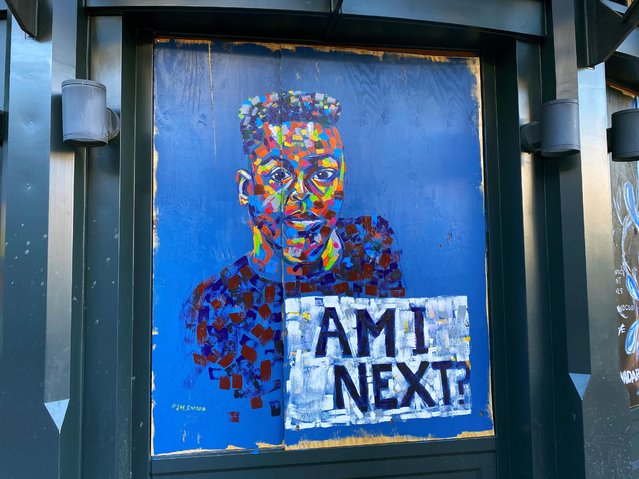 One of the protest murals designed by volunteers and mural artists of the P.A.I.N.T.S Institute adorns the plywood that boards exterior windows of a business, in downtown Washington, June 14, 2020. (Photo by Katanga Johnson/Reuters) 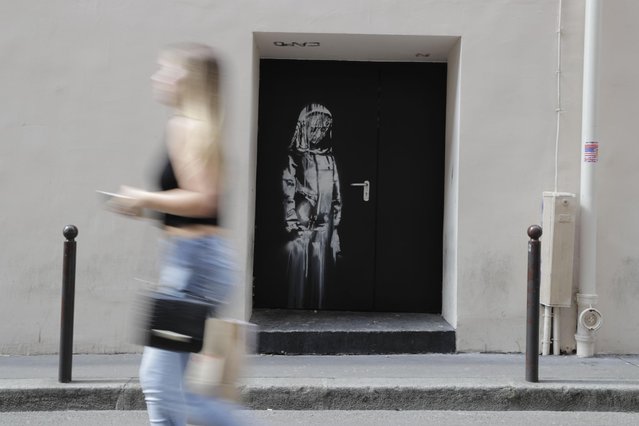 In this file photo taken on June 25, 2018 a woman walks past a recent artwork by street artist Banksy in Paris on a side street to the Bataclan concert hall where a terrorist attack killed 90 people on Novembre 13, 2015. The stolen Banksy work has been found in Italy, AFP reports on June 10, 2020. (Photo by Thomas Samson/AFP Photo) 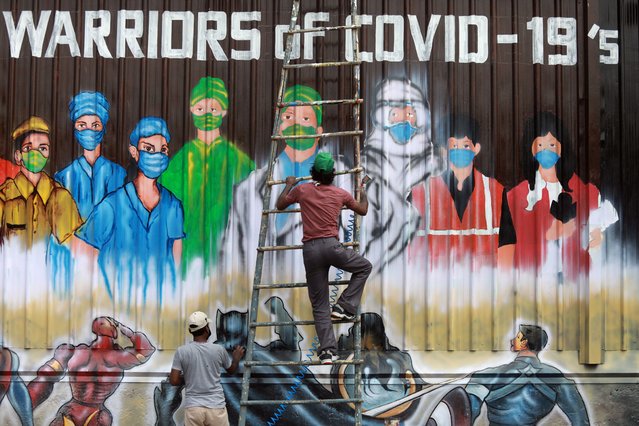 A man gets off a ladder as he completes a mural paying tribute to “COVID-19 warriors” as India eases lockdown restrictions that were imposed to slow the spread of the coronavirus disease (COVID-19), in New Delhi, India, June 8, 2020. (Photo by Anushree Fadnavis/Reuters) 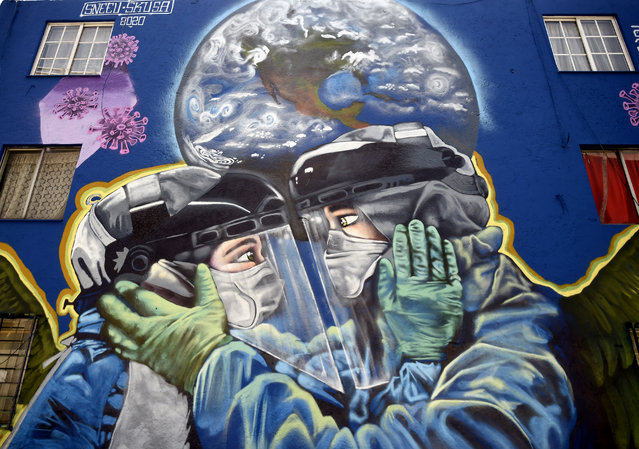 View of a coronavirus-related mural at the San Miguel Chapultepec neighborhood in Mexico City, on June 9, 2020, during the novel COVID-19 pandemic. (Photo by Alfredo Estrella/AFP Photo) 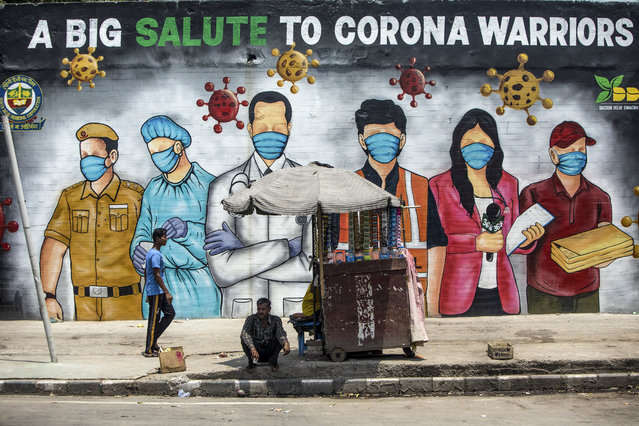 A man rests in the shade of a stall (R) while another walks past a mural showing images of frontline workers after the government eased a nationwide lockdown imposed as a preventive measure against the COVID-19 coronavirus in New Delhi on June 11, 2020. (Photo by Xavier Galiana/AFP Photo) 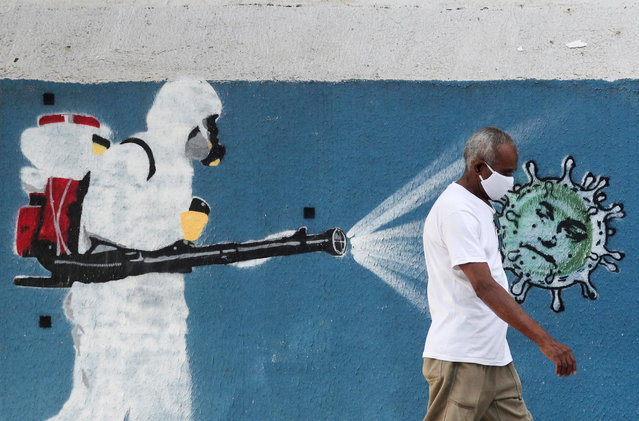 A man walks next to a graffiti depciting a cleaner wearing protective gear spraying viruses with the face of Brazil's President Jair Bolsonaro amid the coronavirus disease (COVID-19) outbreak, in Rio de Janeiro, Brazil, June 12, 2020. (Photo by Sergio Moraes/Reuters) 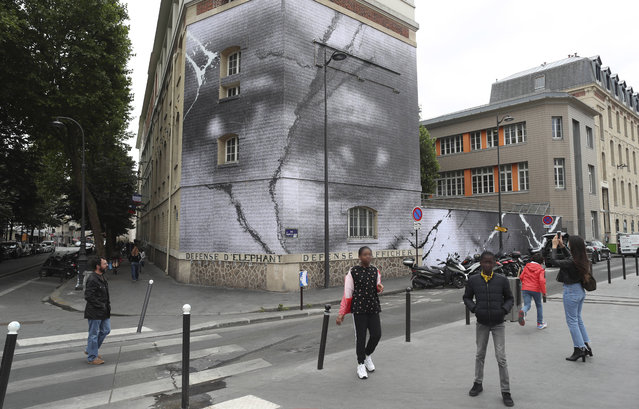 Children stand by an artwork by French street artist JR to pay homage to Adama Traore, Tuesday, June 9, 2020 in Paris. George Floyd's death have revived anger in France over police violence, systemic racism and the complicated case of Adama Traore, a black Frenchman who died in police custody in 2016. (Photo by Thibault Camus/AP Photo) 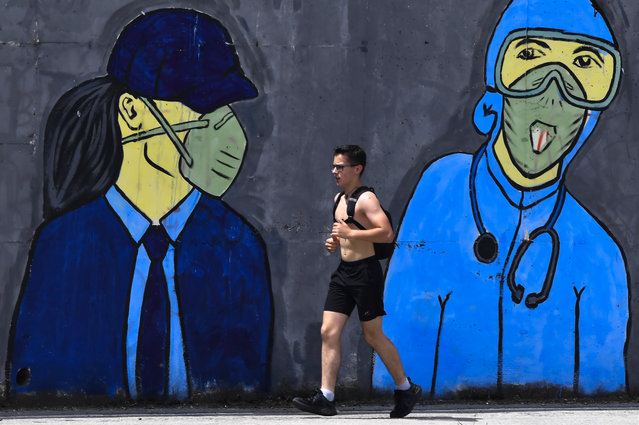 A man runs in front of a mural inspired by the COVID-19 coronavirus pandemic in Skopje, Republic of North Macedonia, 08 June 2020. After an 80-hour curfew, many people left their homes. According to reports, the number of newly infected COVID-19 patients in the North Macedonia is still more than one hundred per day in the last two weeks. The government is considering to continue with preventive measures in the country. (Photo by Georgi Licovski/EPA/EFE) 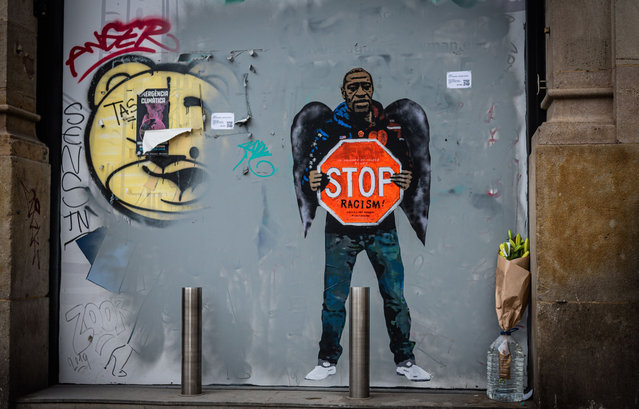 Graffiti of the famous artiost TVBoy appeared some days ago in the city center of Barcelona, in El Born neighbourhood on June 3, 2020. This last graffiti of the artist is in memorial of George Floyd, killed in Minneapolis by the police few days ago. (Photo by Adria Salido Zarco/SIPA Press) 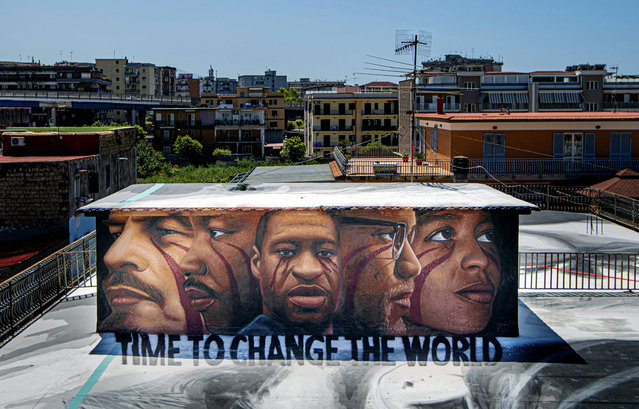 A mural by street artist Jorit, honoring George Floyd, who died May 25 after being restrained by police in Minneapolis, USA, depicts from left, Lenin, Martin Luther King, George Floyd, Malcom X and Angela Davis, atop the roof of a building in Naples, southern Italy, Saturday, June 6, 2020. (Photo by Alessandro Pone/LaPresse via AP Photo) 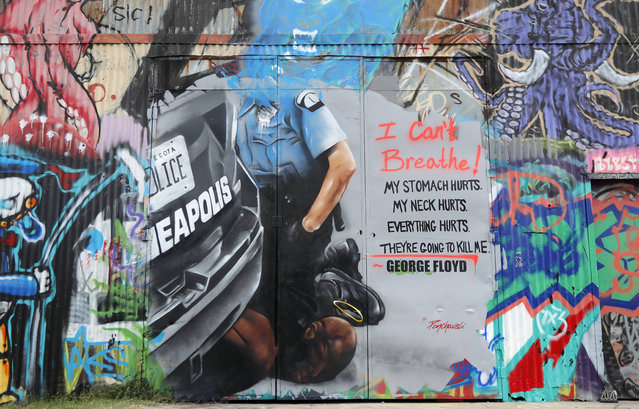 A mural painted by artist Theo Ponchaveli is shown in Dallas, Monday, June 1, 2020, that depicts the scene of George Floyd in Minneapolis Police custody. Floyd is a black man who died in police custody on Memorial Day in Minneapolis, sparking national protests. (Photo by Tony Gutierrez/AP Photo) 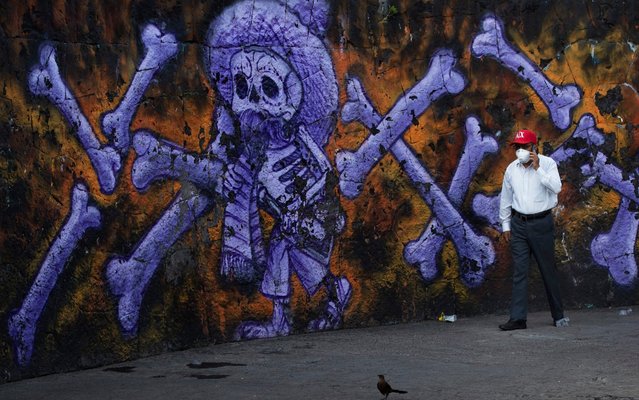 Arturo Morales, the coordinator of several public cemeteries, talks on his cell phone as he walks past a mural of a skeleton and bones that decorate the exterior of the Panteón San Nicolás Tolentino de Iztapalapa cemetery in Mexico City, Thursday, June 4, 2020. Funeral parlors and crematoriums in Iztapalapa, a borough of 2 million people, say they have seen their work multiplied with the surging number of dead of COVID-19 in the capital's hardest-hit corner by the new coronavirus. (Photo by Marco Ugarte/AP Photo) 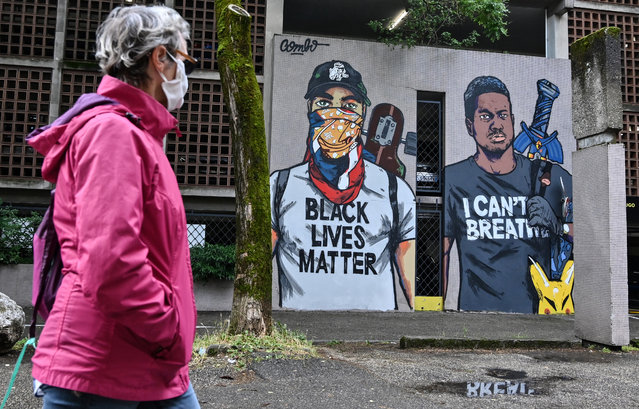 A woman wearing a face mask walks past a mural painted by French artist Combo in homage to George Floyd, an unarmed black man who died after a white policeman knelt on his neck during an arrest in the US, on June 5, 2020, in Grenoble, as part of the 6th Street Art Fest Grenoble-Alpes. (Photo by Philippe Desmazes/AFP Photo)
Edit Del
02 Jul 2020 00:03:00, post received 0 comments
Publication archive:
←   →
Popular tags:
All tags
Last searches: