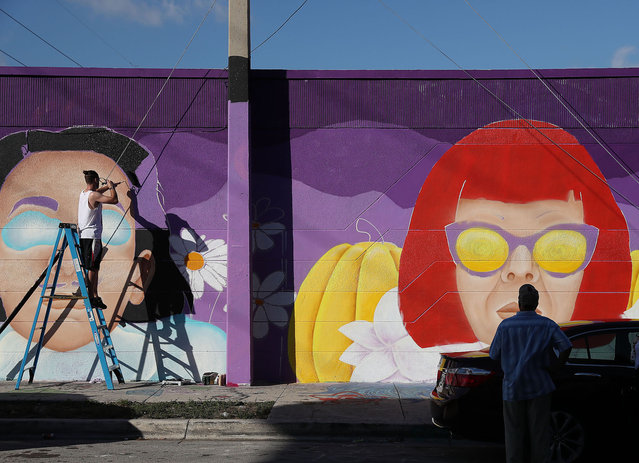 Winston Farrar helps paint a mural by artist, Cloe Hakakian, on the side of a building, as the Wynwood neighborhood prepares for the annual Art Basel art fair on December 03, 2018 in Miami, Florida. Artists and art lovers from around the world flock to the Miami area from Dec. 6 to the 9th to visit Art Basel as well as the satellite galleries that pop up throughout the city during the week. (Photo by Joe Raedle/Getty Images) 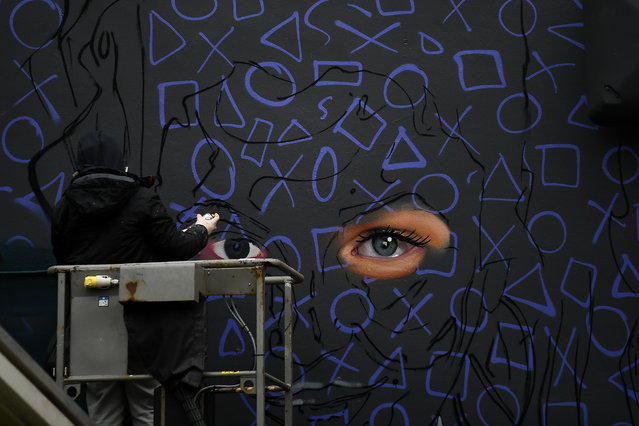 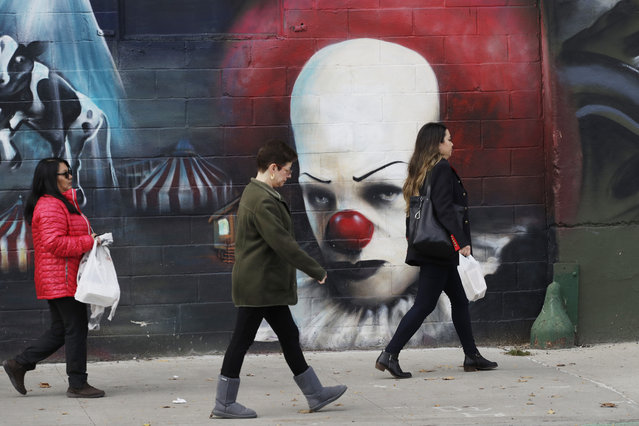 In this Wednesday, November 7, 2018, photo, people walk past a mural in Long Island City in the Queens borough of New York. Across the East River from midtown Manhattan, Long Island City is a longtime industrial and transportation hub that has become a fast-growing neighborhood of riverfront high-rises and redeveloped warehouses, with an enduring industrial foothold and burgeoning arts and tech scenes. (Photo by Mark Lennihan/AP Photo) 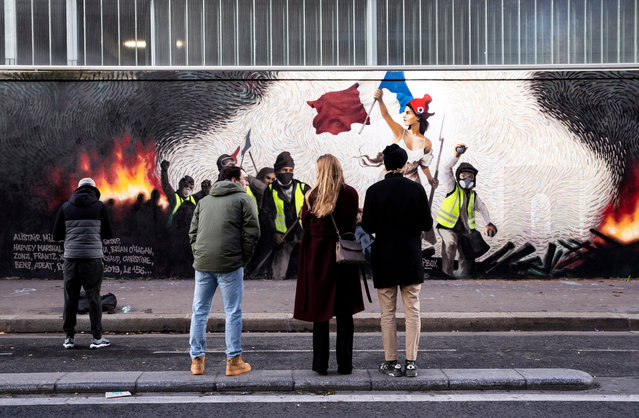 People look for clues to get a reward hidden in a mural reproducing a “Yellow Vests” version of Eugene Delacroix “Liberty Leading the People” by French crypto-artist Pascal Boyart in Paris, France, 08 January 2019. The artist hid clues leading to a digital wallet containing 0,26 Bitcoin around 900€. (Photo by Etienne Laurent/EPA/EFE) 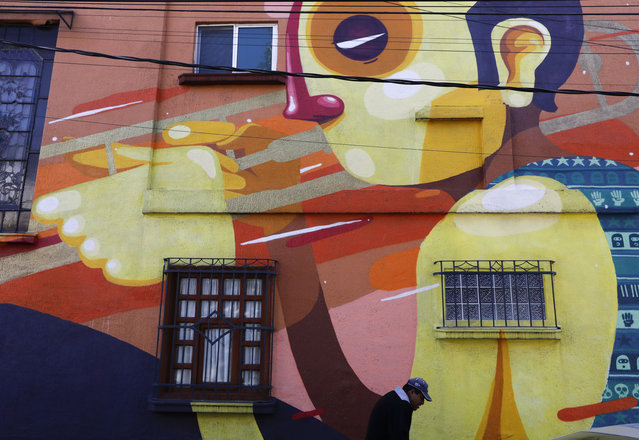 A mural decorates a building on Tepeji Street where Mexican film director Alfonso Cuaron grew up in the 1970s in the Roma Sur neighborhood of Mexico City, Wednesday, December 19, 2018. News of Alfonso Cuaron's “Roma” being nominated for 10 Academy Awards had residents of the director's childhood Mexico City neighborhood joyfully mining their own memories and anticipating showing their children the film someday. (Photo by Rebecca Blackwell/AP Photo) 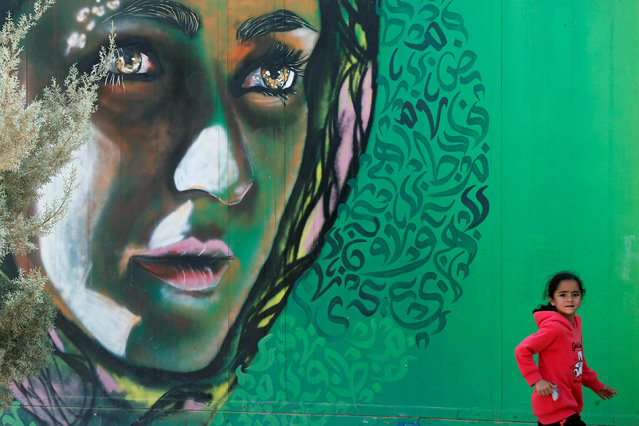 A child runs next a mural at Al-Zaatari refugee camp in Mafraq, Jordan on November 30, 2018. (Photo by Muhammad Hamed/Reuters) 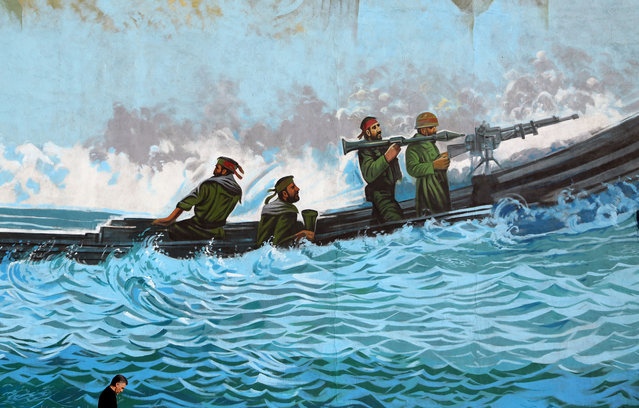 A man passes by a painted wall in Tehran, Iran on January 16, 2019. On January 16, 2016, the International Atomic Energy Agency verified that Iran has completed the necessary steps under the “Iran deal” that will ensure Iran's nuclear program is and remains exclusively peaceful but the withdrawal of United States from the nuclear agreement caused Iranian people to worry about the agreement's future. Iranians continue their daily lives in the 3rd year of the disembargo towards Iran. (Photo by Fatemeh Bahrami/Anadolu Agency/Getty Images) 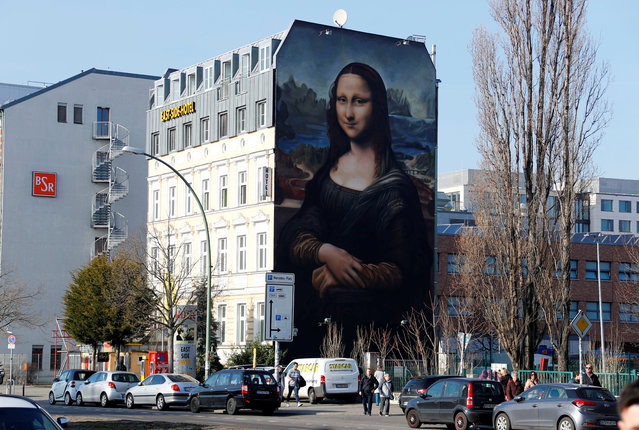 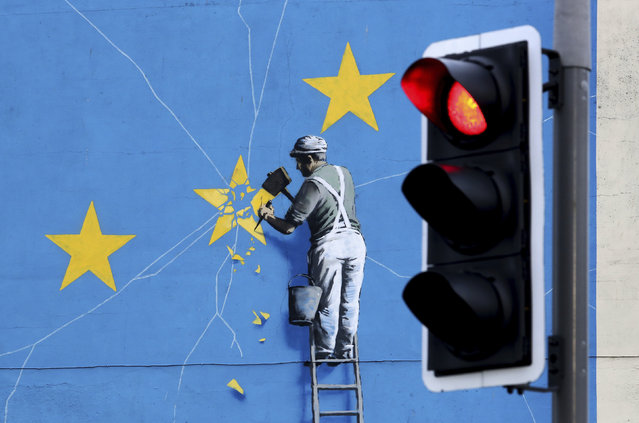 A view of the Banksy Brexit mural of a man chipping away at the EU flag in Dover, England, Tuesday, December 11, 2018. Top European Union officials on Tuesday ruled out any renegotiation of the divorce agreement with Britain, as Prime Minister Theresa May fought to save her Brexit deal by lobbying leaders in Europe's capitals. (Photo by Gareth Fuller/PA Wire via AP Photo) 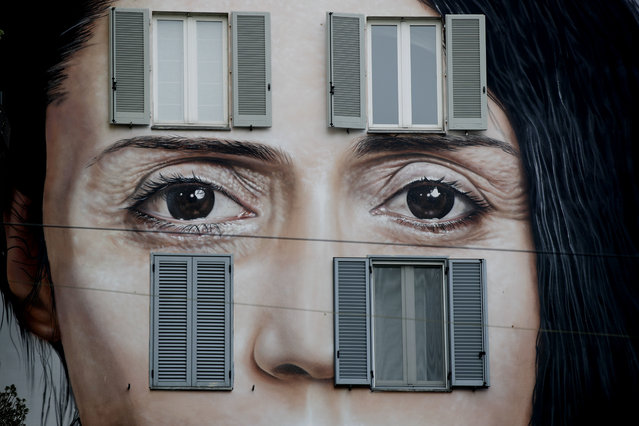 An art wall painting representing performance artist Marina Abramovic by Italian artist Maurizio Cattellan to publicize his upcoming exhibition The Artist is Present, in Shanghai, China, is displayed on a facade of a building, in Milan, Italy, Wednesday, September 19, 2018. (Photo by Luca Bruno/AP Photo) 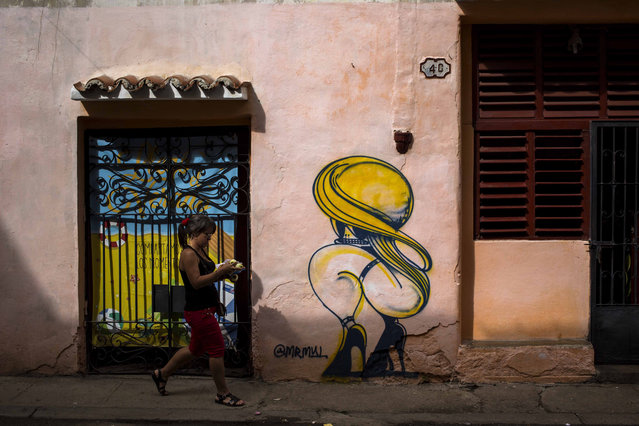 A woman passes by a closed art store decorated by a mural in Havana, Cuba, Wednesday, December 5, 2018. After weeks of public debates and overlapping complaints from artists and intellectuals about a decree that increased control for artists and promoters, Cuban authorities are about to publicize complementary rules that limit the power of cultural inspectors and limit official action about creation. (Photo by Desmond Boylan/AP Photo) 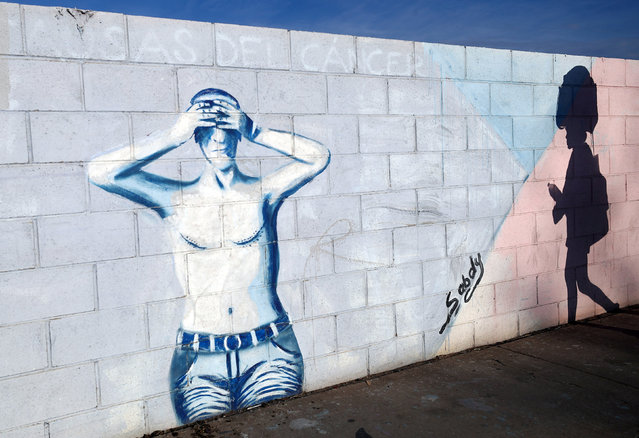 A migrant, part of a caravan of thousands traveling from Central America en route to the United States, casts her shadow on a wall of graffiti as she makes his way to Tijuana from Mexicali, Mexico, November 20, 2018. (Photo by Hannah McKay/Reuters) 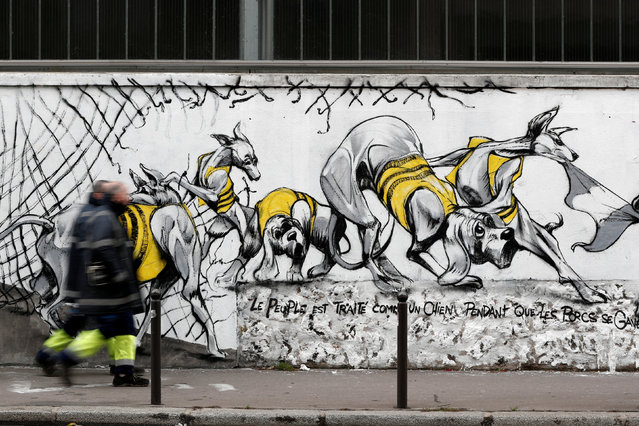 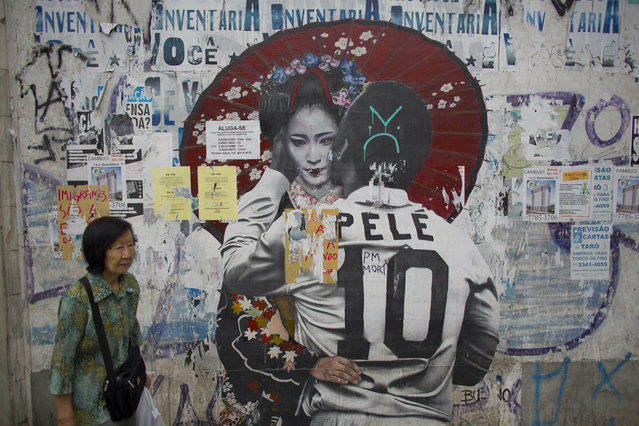 In this December 27, 2018 photo, a woman walks by a mural of Brazilian soccer legend Pele hugging a Geisha in Sao Paulo, Brazil's Asian neighborhood of Liberdade, the area where an influential Japanese-language newspaper ran its last print edition on Jan. 1, 2019. The arrival of the first Japanese immigrants to Brazil was the result of negotiations between Japan and Sao Paulo state, where most Japanese-Brazilians still live. (Photo by Victor R. Caivano/AP Photo) 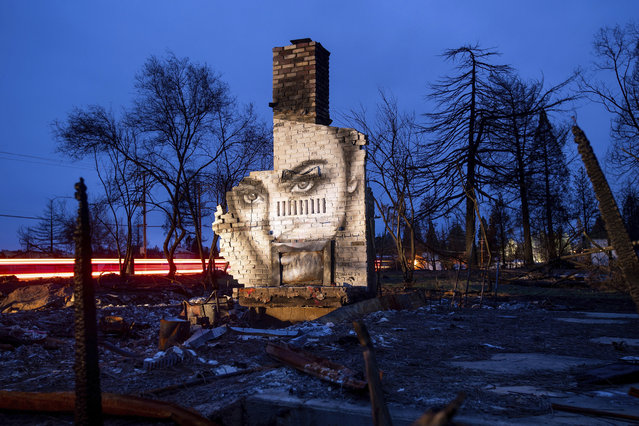 In this February 8, 2019, photo, a mural by artist Shane Grammer adorns the chimney of a residence leveled by the Camp Fire in Paradise, Calif. Grammer says he painted murals throughout the fire-ravaged town to convey hope in the midst of destruction. In the 100 days since a wildfire nearly burned the town of Paradise off the map, the long recovery is just starting. Work crews have been cutting down trees and clearing burned-out lots, but Paradise is mostly a ghost town where survivors still dig for keepsakes in the foundations of their homes. (Photo by Noah Berger/AP Photo) 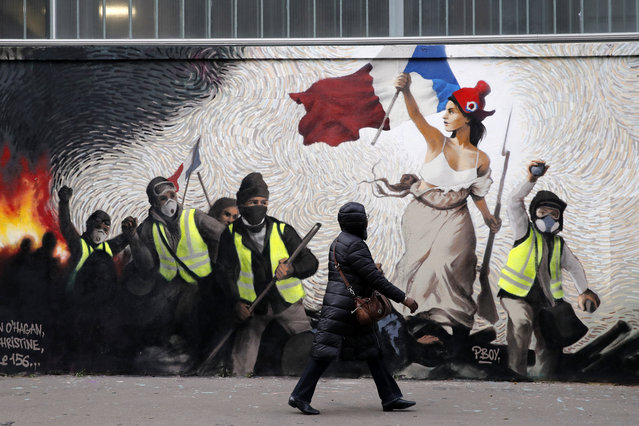 A woman passes by a mural by street artist PBOY depicting Yellow Vest (gilets jaunes) protestors inspired by a painting by Eugene Delacroix, “La Liberte guidant le Peuple” (Liberty Leading the People), in Paris, Thursday, January 10, 2019. French President Emmanuel Macron is facing a mountain of challenges in the new year starting with yellow vest protesters who are back in the streets to show their anger against high taxes and his pro-business policies that they see as favoring the wealthy rather than the working class. (Photo by Christophe Ena/AP Photo) 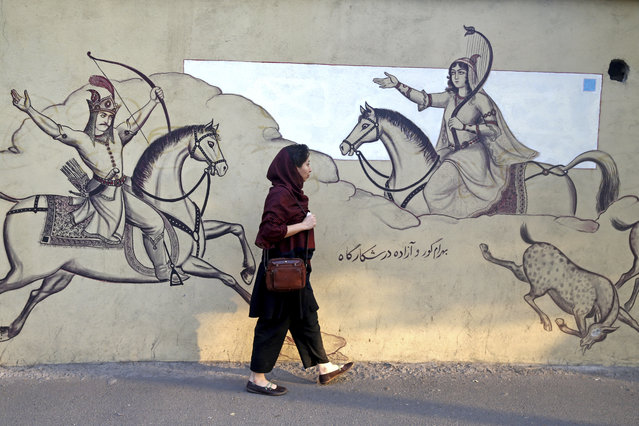 An Iranian woman walks past paintings of a Persian poetry in downtown Tehran, Iran, Monday, July 30, 2018. Iran's currency has dropped to a record low ahead of the imposition of renewed American sanctions, with many fearing prolonged economic suffering or possible civil unrest. (Photo by Ebrahim Noroozi/AP Photo) 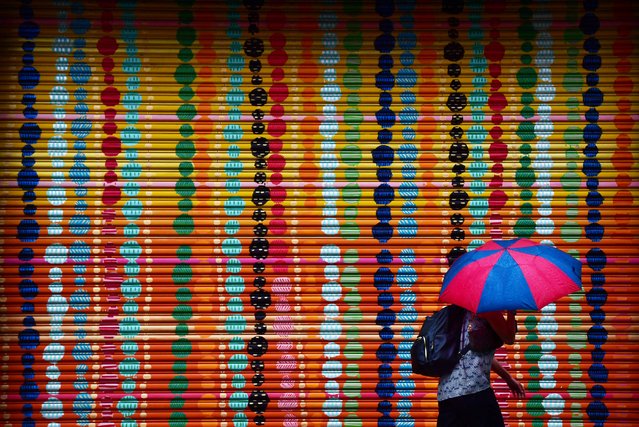 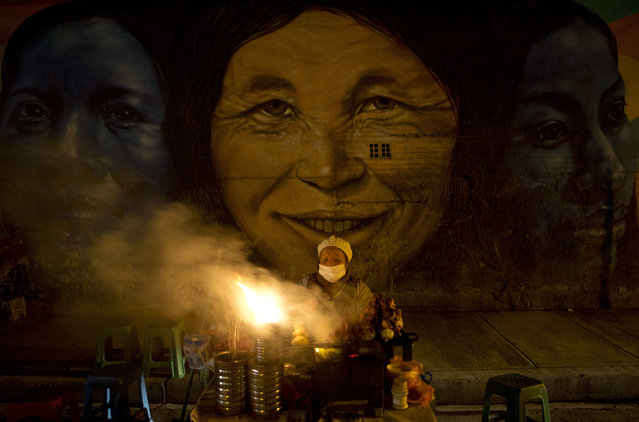 In this October 26, 2018 photo photo, a street vendor keeps food warm on the perimeters of the General Cemetery where images of indigenous women are projected on the wall, in La Paz, Bolivia. People toured the cemetery Friday night for the eighth annual cultural event coined “A night in the cemetery” where actors portray the lives of famous people buried there. (Photo by Juan Karita/AP Photo) 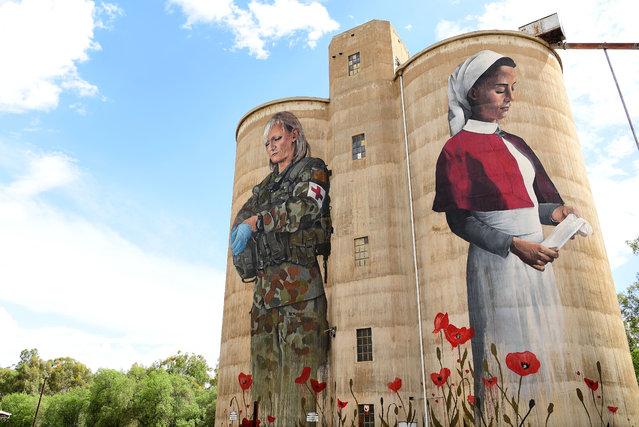 The Devenish Silo Artwork painted by Melbourne artist Cam Scale is seen on March 04, 2019 in Devenish, Australia. The Silo Art Trail is Australia's largest outdoor gallery. The trail started in 2016 and stretches over 200km, linking Brim with neighbouring towns Lascelles, Patchewollock, Rosebery, Rupanyup and Sheep Hills in the Wimmera Mallee area of rural Victoria. The trail recognises and celebrates the region's people through a series of large-scale mural portraits painted onto grain silos, many of which date back to the 1930s. (Photo by Quinn Rooney/Getty Images)
Edit Del
07 Mar 2019 00:05:00, post received 0 comments
Publication archive:
←   →
Popular tags:
All tags
Last searches: