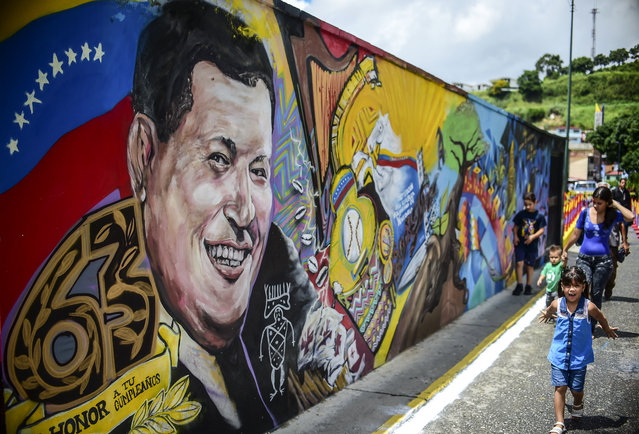 Children walk by a mural depicting late Venezuelan president Hugo Chavez at “23 de Enero” neighbourhood in Caracas near the “Cuartel de la Monta'a” museum where his body rests, on July 28, 2017 on the 63rd anniversary of his birth. The opposition called fresh nationwide demonstrations in defiance of a new government ban on rallies ahead of Sunday's controversial vote to elect a body to rewrite the constitution. (Photo by Ronaldo Schemidt/AFP Photo) 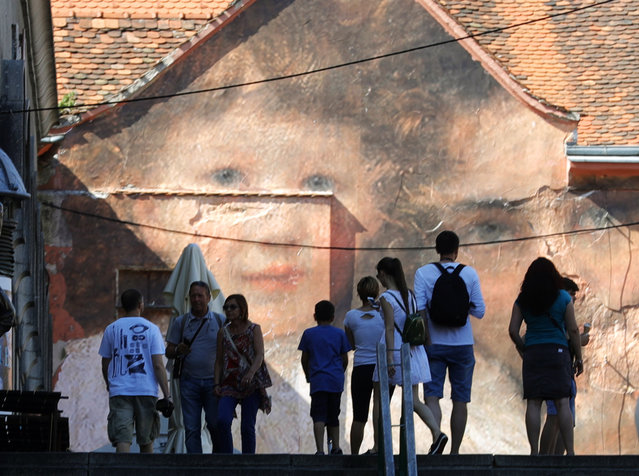 Tourists walk near an artwork of artist Julien De Casablanca on a facade in downtown Zagreb, 11 June 2017. Julien De Casablanca is French and Corsican visual artist and filmmaker who launched Outings Project, which consists in bringing paintings from museum walls into the streets all over the world and In Zagreb he will present his exhibition from 06-28 June this year. (Photo by Antonio Bat/EPA) 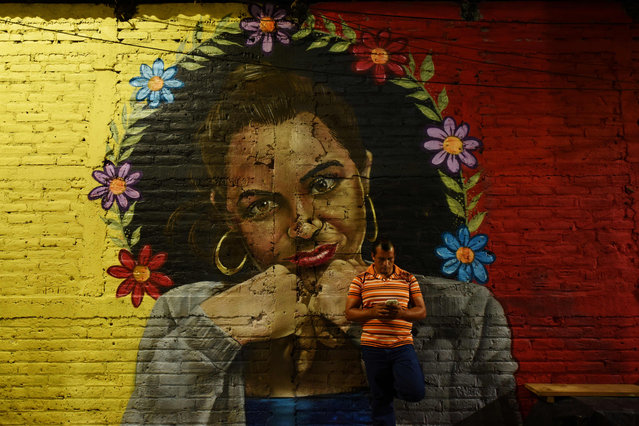 A man uses his mobile phone in front of a wall decorated with graffiti at Santa Fe Community in San Salvador, El Salvador on July 18, 2017. A group of young people, with the support of San Salvador' s mayoralty, carried out the making of artistic graffiti on walls where there was gang- related graffiti. (Photo by Marvin Recinos/AFP Photo) An Israeli soldier aims his weapon during clashes with Israeli troops at Qalandia checkpoint between Jerusalem and the West Bank city of Ramallah, Wednesday, July 19, 2017. A dispute over metal detectors has escalated into a new showdown between Israel and the Muslim world over the contested Jerusalem shrine that has been at the center of violent confrontations in the past. (Photo by Nasser Shiyoukhi/AP Photo) 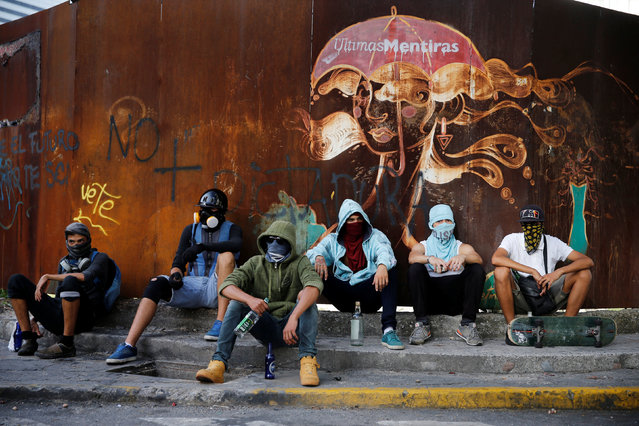 Protesters sit underneath a graffiti with the writing “Last lies” during a rally against Venezuela's President Nicolas Maduro's government in Caracas, Venezuela, June 26, 2017. (Photo by Ivan Alvarado/Reuters) 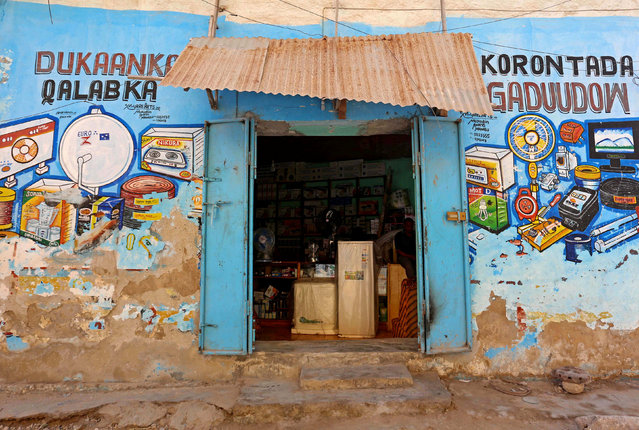 A mural illustrating electronic appliances is seen on a wall of a shop in Hamarweyne district of Mogadishu, Somalia, June 8, 2017. (Photo by Feisal Omar/Reuters) 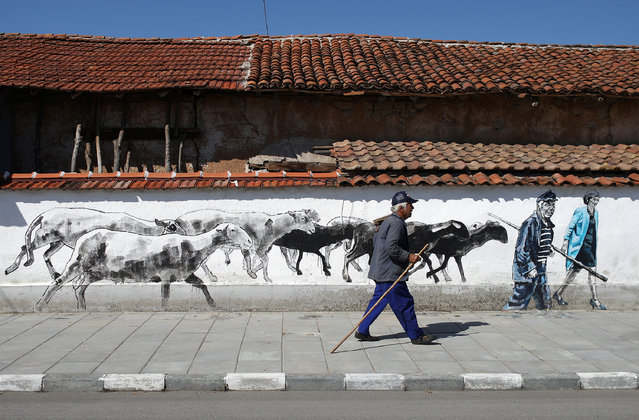 Local villager Lazar, walks past murals on the wall of his house, depicting him and Britain's Prime Minister Theresa May, in the village of Staro Zhelezare, Bulgaria, July 28, 2017. (Photo by Stoyan Nenov/Reuters) 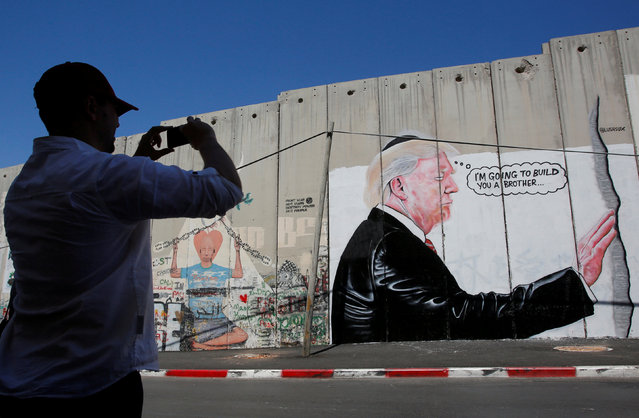 A man takes a photo of a graffiti depicting U.S President Donald Trump on the controversial Israeli barrier in the West Bank town of Bethlehem August 4, 2017. (Photo by Mussa Qawasma/Reuters) Two unidentified members of the Mara Salvatrucha “MS-13” (juvenile gang) show their tatoos in front of a graffiti with a message that reads “we ask the Honduran people for forgiveness”, in a unit of the National Penitentiary in Tamara, 30km north of Tegucigalpa, 01 February 2006. (Photo by Elmer Martinez/AFP Photo) 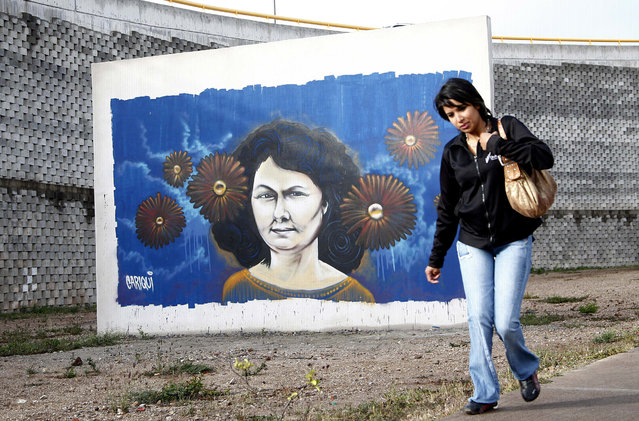 In this Jan. 31, 2017 file photo, a woman walks past a mural of slain environmentalist and indigenous leader Berta Caceres in Tegucigalpa, Honduras. Two European development banks financing construction of a controversial dam project in Honduras are pulling out following the murders of local activists including Caceres, a 2015 winner of the prestigious Goldman Environmental Prize. (Photo by Fernando Antonio/AP Photo) 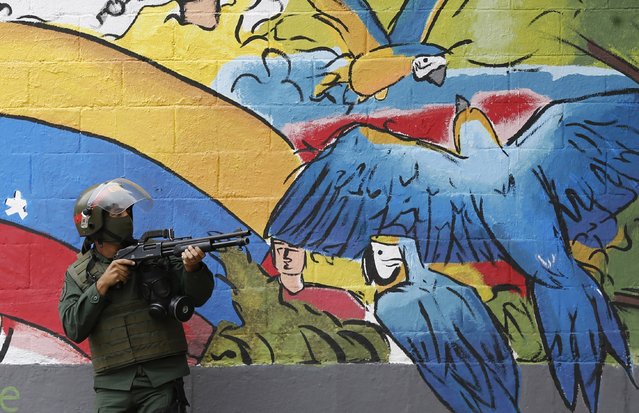 A National Guard points his weapon during clashes with anti-government demonstrations in the streets of Caracas, Venezuela, Thursday, July 20, 2017. Venezuelan President Nicolas Maduro and his opponents faced a crucial showdown Thursday as the country's opposition called for a 24-hour national strike. (Photo by Ariana Cubillos/AP Photo) 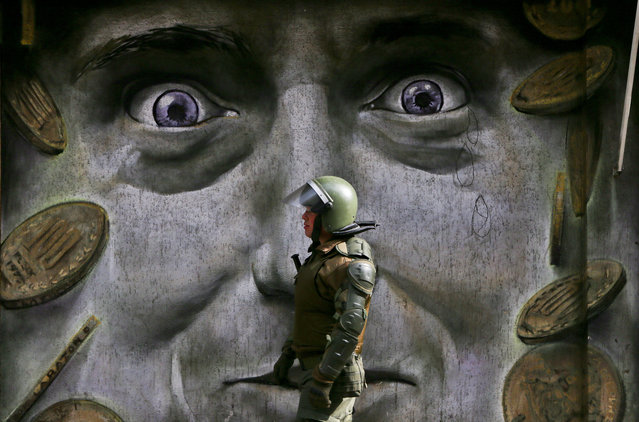 In this Monday, July 24, 2017 photo, a police officer walks in front of a mural during a protest demanding an end to the current pension fund system, in Santiago, Chile. Protesters say the government pension system robs retirees of fair pension payments, and are demanding a new social security system with higher payments. (Photo by Esteban Felix/AP Photo) 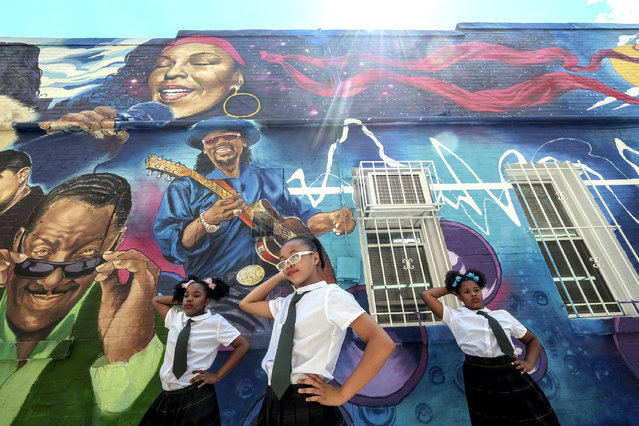 Mariyiah Thompson, 9, Amiyah Wright, 10, and Jaylah Carter, 11, with Visions Perfoming Arts Company, practice prior to a ribbon cutting celebration for a new mural honoring famous personalities on a wall at Ben's Chili Bowl in Washington, DC on June 21, 2017. The mural was created by Aniekan Udofia using subjects chosen by an online community. Donnie Simpson, Chuck Brown and Roberta Flack are among the celebrities depicted. (Photo by Bonnie Jo Mount/The Washington Post) 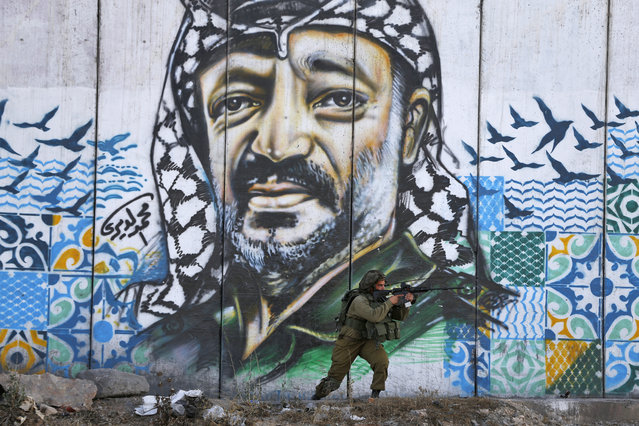 A member of the Israeli border guards looks through the scope of an assault rifle as he stands by a mural showing a graffiti image of late Palestinian leader Yasser Arafat, at the Qalandiya checkpoint near the West Bank city of Ramallah on July 19, 2017, during clashes after a protest by Palestinian youths against new Israeli security measures at the Al-Aqsa mosque compound, which include metal detectors and cameras, following an attack that killed two Israeli policemen. (Photo by Abbas Momani/AFP Photo) 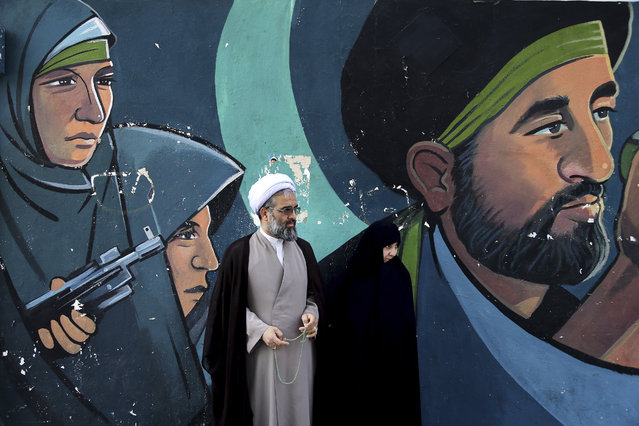 A cleric and his wife stand in front of a mural showing depicting members of paramilitary Basij during an annual pro-Palestinian rally marking Al-Quds (Jerusalem) Day in Tehran, Iran, Friday, June 23, 2017. Iran held rallies across the country, with protesters condemning Israel's occupation of Palestinian territories and chanting “Death to Israel”. (Photo by Ebrahim Noroozi/AP Photo) 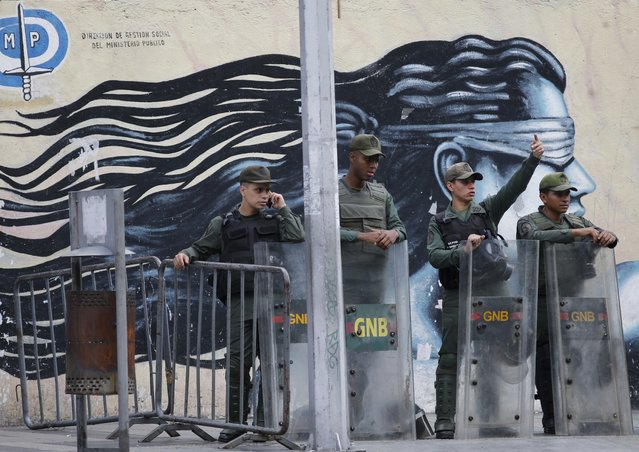 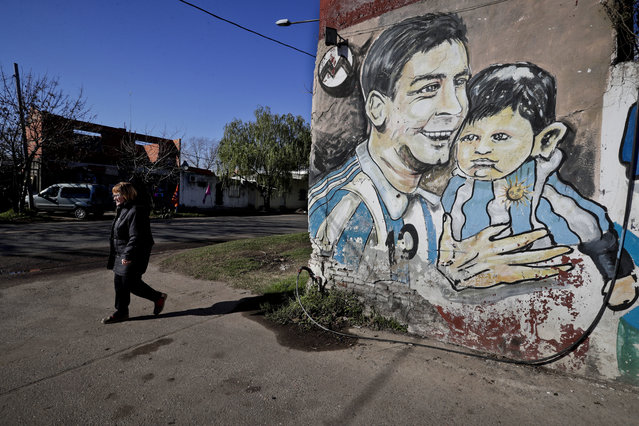 A woman walks by graffiti of Lionel Messi painted near the house where the soccer star grew up in Rosario, Argentina, Friday, June 30, 2017. Some 260 guests, including teammates and former teammates of the Barcelona star, are expected to attend the highly anticipated wedding between Messi and Antonella Roccuzzo later Friday. (Photo by Victor R. Caivano/AP Photo) 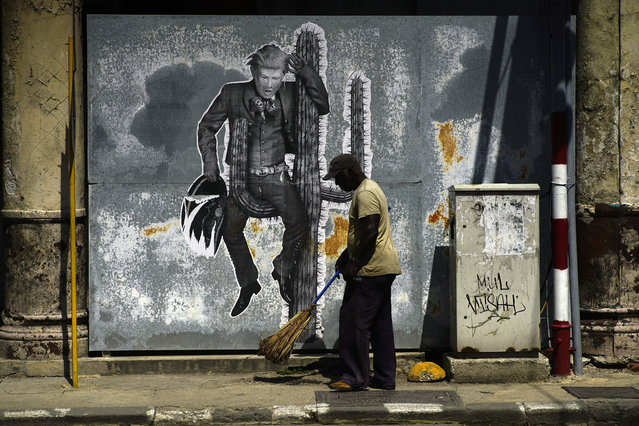 A street sweeper cleans the sidewalk under a mural painting depicting U.S. President Donald Trump, in Havana, Cuba, Friday, June 16, 2017. President Trump is en route to Miami, where he'll announce his plans for halting the flow of U.S. cash to Cuba's military and security services while maintaining diplomatic relations, in a partial reversal of the Obama administration policies. (Photo by Ramon Espinosa/AP Photo) 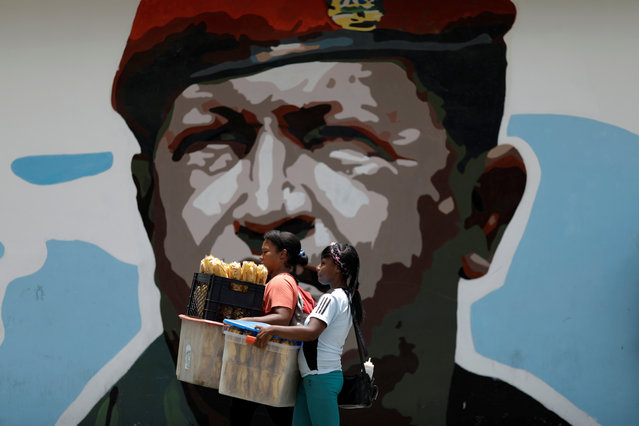 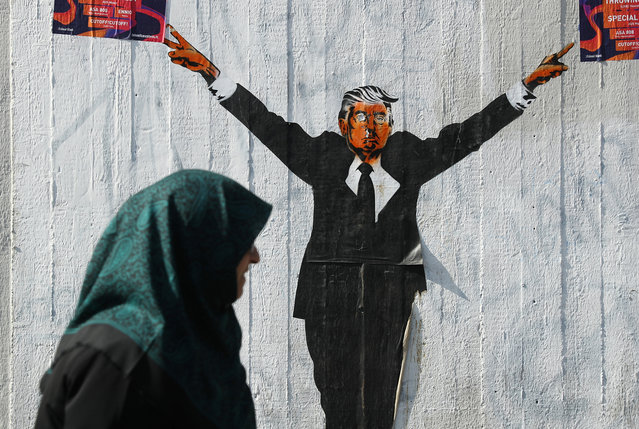 A Muslim woman walks past a street artist's rendition of U.S. President Donald Trump on June 27, 2017 in Berlin, Germany. The U.S. Supreme Court recently partially lifted a blockade by lower courts of Trump's travel ban on people from six predominantly Muslim countries, though the court decision allows people with a viable connection to the U.S., for instance through family, study or work, to still enter the U.S. (Photo by Sean Gallup/Getty Images) 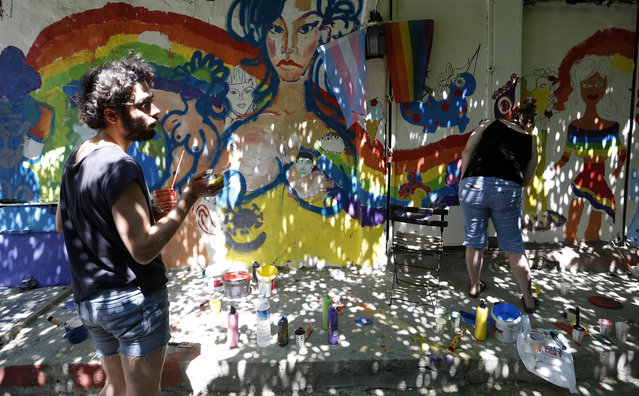