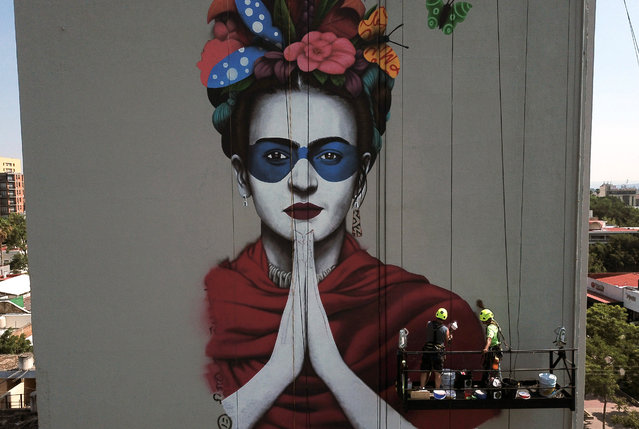 Irish urban artist Fin Dac (2-R) and his assistant work on his mural “Magdalena”, in honor of Mexican painter Magdalena Carmen Frida Kahlo in the month of her birth, in Guadalajara, Jalisco state, Mexico, on July 9, 2019. (Photo by Ulises Ruiz/AFP Photo) 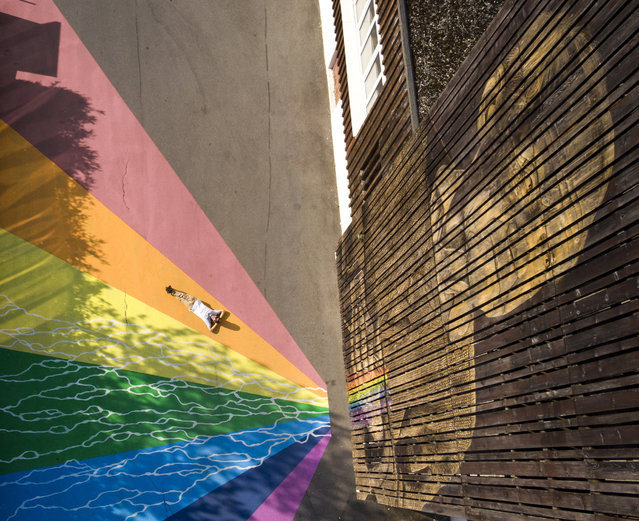 An image taken with a drone showing the giant fresco Fluidity of Swiss street artist Antoine Guignard (lying on the ground) aka LPVDA (les pinceaux verts d'Antoine) during the AILYOS art nature festival, in Leysin, Switzerland, 25 July 2019. The 20 meters high fresco by LPVDA realized over three weeks, is solely based on a fine wood sanding technique and depicts the portrait of the 100-year-old Swiss painter Ernest Blatter who lives in the Swiss Alps resort of Leysin. (Photo by Laurent Gilliéron/EPA/EFE) 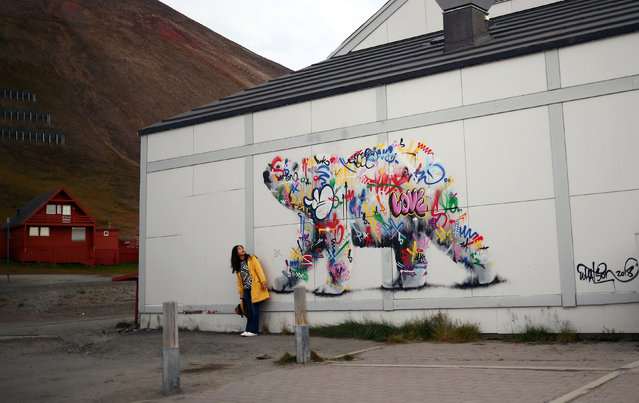 A woman poses next to a polar bear mural in the town of Longyearbyen in Svalbard, Norway, August 6, 2019. (Photo by Hannah McKay/Reuters) 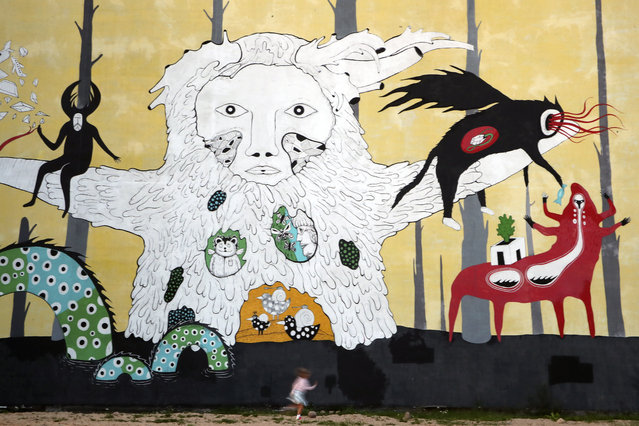 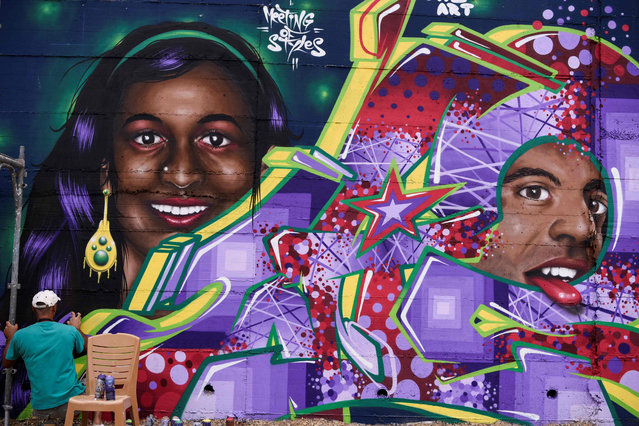 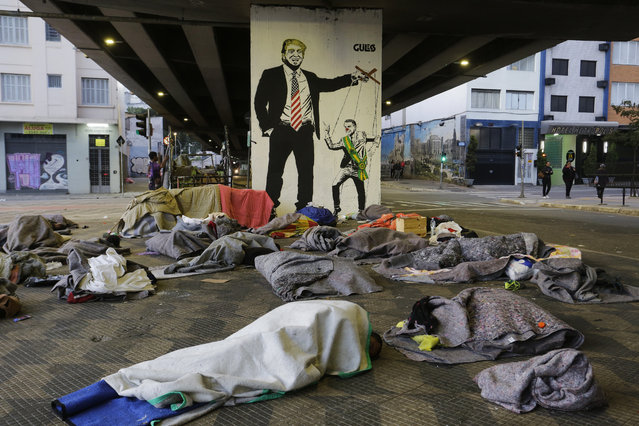 Homeless people sleep under a bridge in front of a mural depicting U.S. President Donald Trump as a puppeteer manipulating Brazil's President Jair Bolsonaro, in downtown Sao Paulo, Brazil, Tuesday, July 23, 2019. Bolsonaro said last week that severe hunger is not a problem for the country. He acknowledged that things could “go bad” and people might “not eat well”. But, he added: “To speak of starving in Brazil is a big lie”. (Photo by Nelson Antoine/AP Photo) 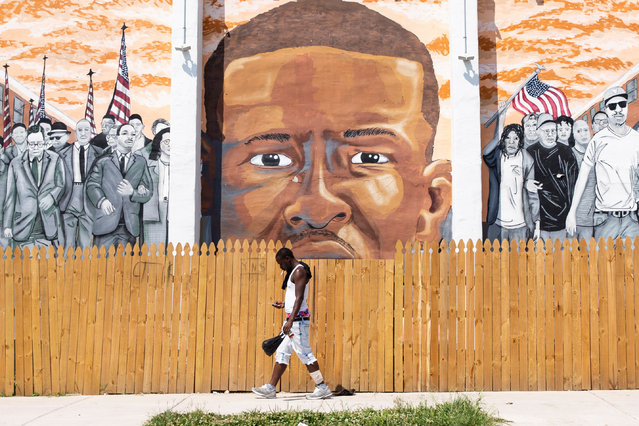 A pedestrian walks past a mural dedicated to Freddie Gray, near the site where he was beaten by police in 2015 in western Baltimore, Maryland, USA, 29 July 2019. Freddie Gray was a citizen who died from injuries inflicted by Baltimore police. Over the weekend Trump doubled-down on social media comments he made disparaging Democratic Representative from Maryland Elijah Cummings and the city of Baltimore, which he said is a “rat and rodent infested mess”. Trump's comments have been widely dismissed by Democrats as offensive. (Photo by Michael Reynolds/EPA/EFE) 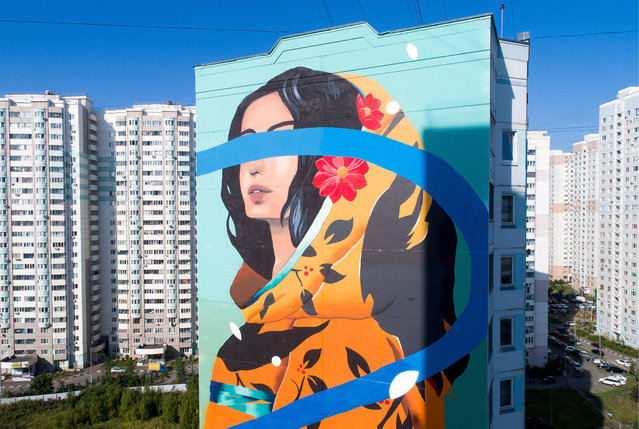 A mural on an apartment block as part of the Urban Morphogenesis street art festival in the Novaya Tryokhgorka residential neighbourhood in the town of Odintsovo in Moscow Region, Russia on September 3, 2019. (Photo by Sergei Bobylev/TASS) 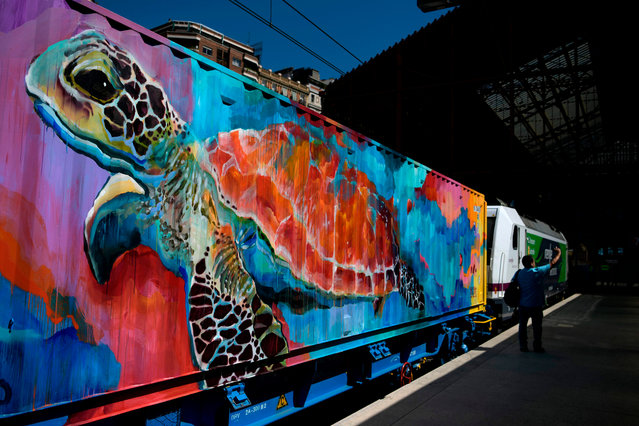 A man takes a picture from the platform, in front of the so-called Noah's Train, a 200-metre long freight train with wagons designed by street artists, at the Principe Pio train station in Madrid, on September 5, 2019. The initiative launched by the Rail Freight Forward (RFF), is the world's longest mobile artwork aimed at bringing attention to the coalition’s goal of shifting 30% of freight to rail by 2030, and underlines its commitment to more climate protection and the conservation of endangered species. Renfe Mercancias and Transfesa Logistics rail transport companies, joined the RFF coalition. (Photo by Gabriel Bouys/AFP Photo) 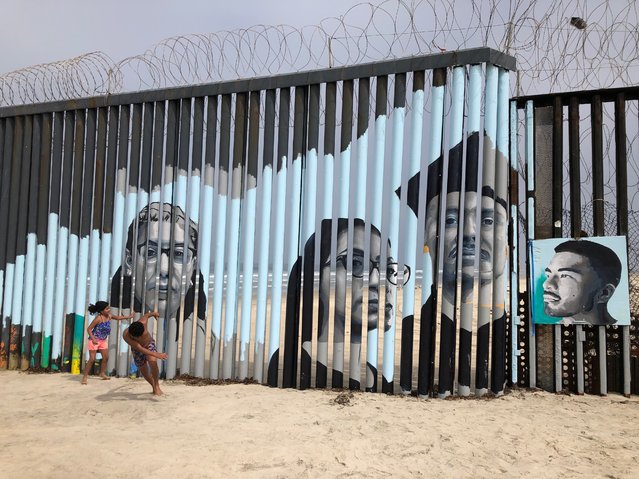 Children play in front of a new mural on the Mexican side of a border wall in Tijuana, Mexico Friday, August 9, 2019. The mural shows faces of people deported from the U.S. with barcodes that activate first-person narratives on visitors' phones. Lizbeth De La Cruz Santana conceived the interactive mural in Tijuana as part of doctoral dissertation at the University of California, Davis. (Photo by Elliot Spagat/AP Photo) 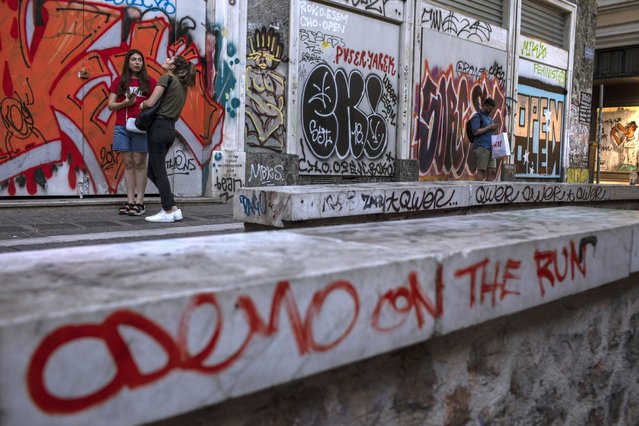 In this Friday, July 26, 2019 photo, a marble-topped wall round the 11th Century AD Panagia Kapnikarea church and a shop that has been closed for months are covered with graffiti in Athens' Ermou main shopping street.While Athens has acquired many striking murals by artists commissioned by public bodies or private property owners, most of the new graffiti is unsolicited, devoid of visible meaning and cacophonous – a jostling mass of individual “look at me” cries on somebody else's wall. (Photo by Petros Giannakouris/AP Photo) 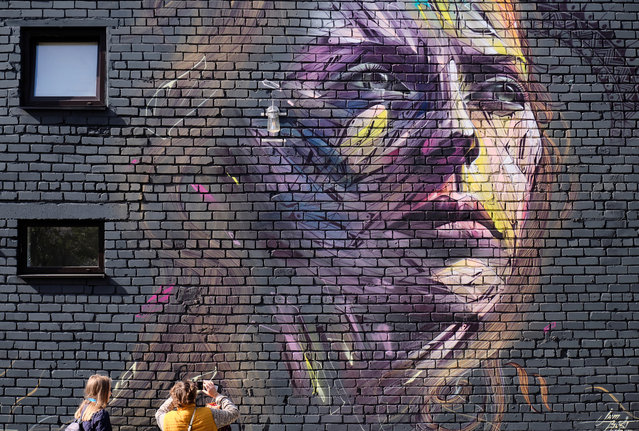 People take a picture of a wall painting in the Telliskivi Creative City in the renovated former industrial quarter in Tallinn, Estonia on September 6, 2019. (Photo by Ints Kalnins/Reuters) 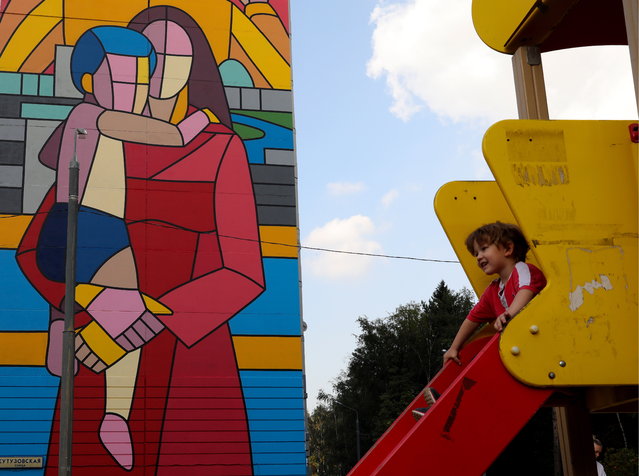 A mural on an apartment block created as part of the Urban Morphogenesis street art festival in the Novaya Tryokhgorka residential neighbourhood in the town of Odintsovo in Moscow Region, Russia on August 31, 2019. (Photo by Valery Sharifulin/TASS) 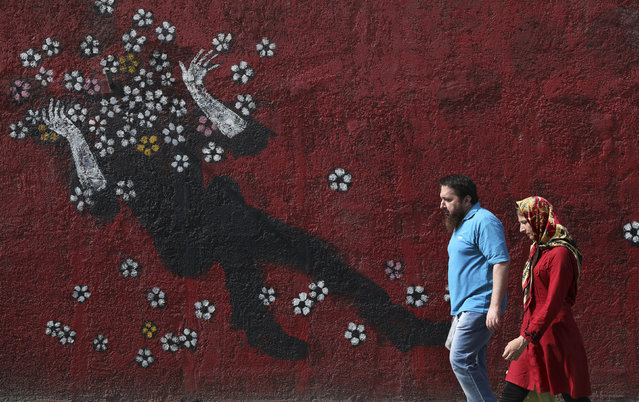 People walk past a mural in a sidewalk in downtown Tehran, Iran, Sunday, July 21, 2019. (Photo by Vahid Salemi/AP Photo) 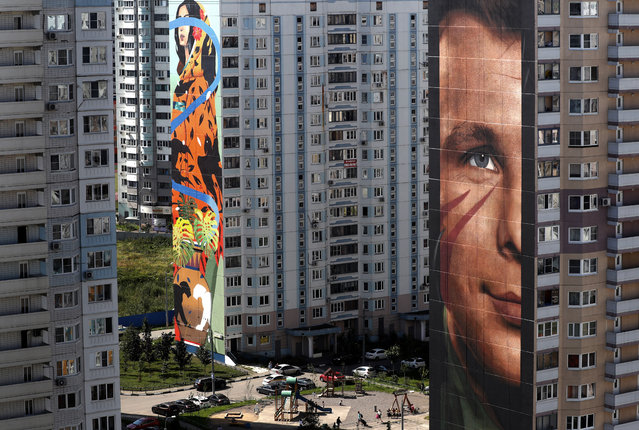 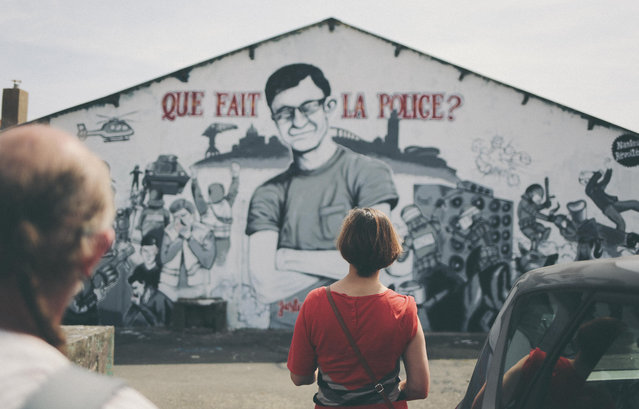 A gathering called in memory of Steve Maia Caniço whose body was found in the River Loire a month after he went missing during a police raid on a music festival on August 3, 2019 in Nantes, France. (Photo by Marin Driguez/SIPA Press) 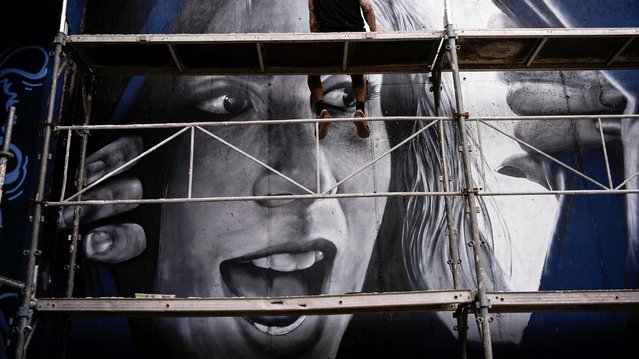 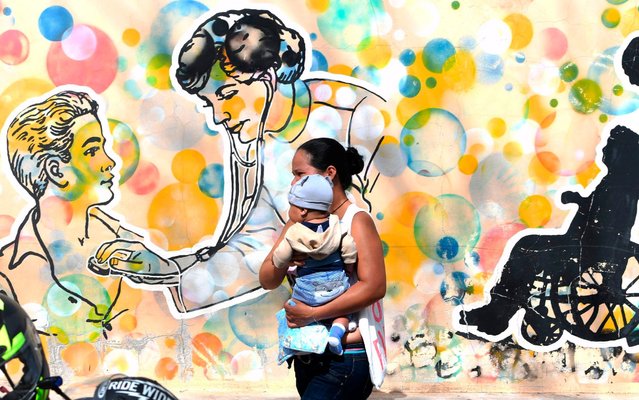 A woman looks for medical attention for her baby, allegedly affected by dengue fever, at the Alonso Suazo Health Center in Tegucigalpa on July 22, 2019. Honduras is under national alert since July 2 for dengue fever, which left at least 54 dead this year according to authorities. (Photo by Orlando Sierra/AFP Photo) 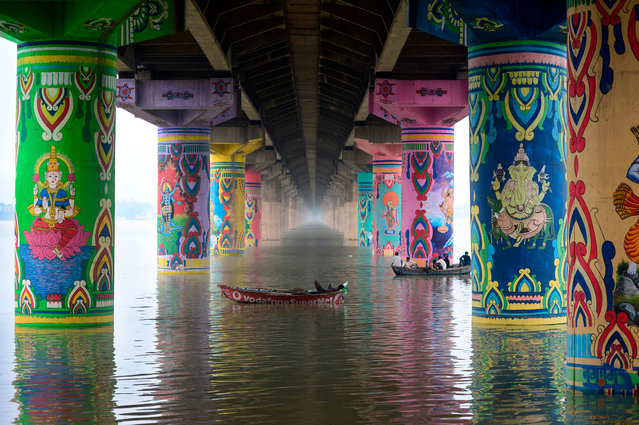 A boatman rests on his boat in the flooded Ganges river under the Shastri bridge at Daraganj Ghat, in Allahabad on August 22, 2019. (Photo by Sanjay Kanojia/AFP Photo) 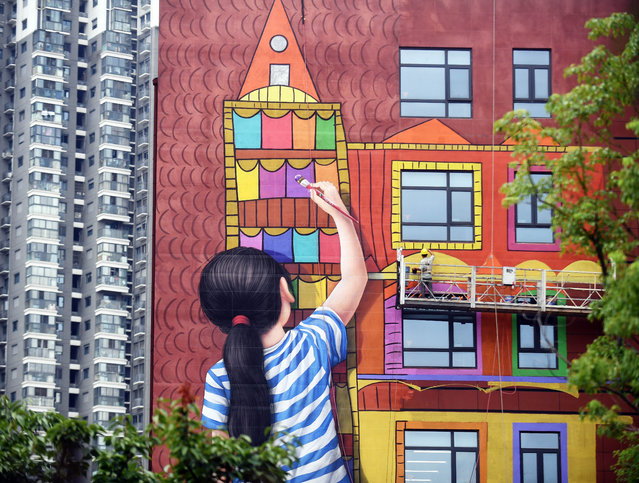 A worker paints on the wall of Jiangsu Women and Children Health Hospital on September 4, 2019 in Nanjing, Jiangsu Province of China. The wall painting of “a girl drawing colorful houses” is a part of Jiangsu Women and Children Health Hospital's “Angel Plan” which hopes to heal people's soul with arts. (Photo by VCG/VCG via Getty Images)
Edit Del
09 Sep 2019 00:03:00, post received 0 comments
Publication archive:
←   →
Popular tags:
All tags
Last searches: