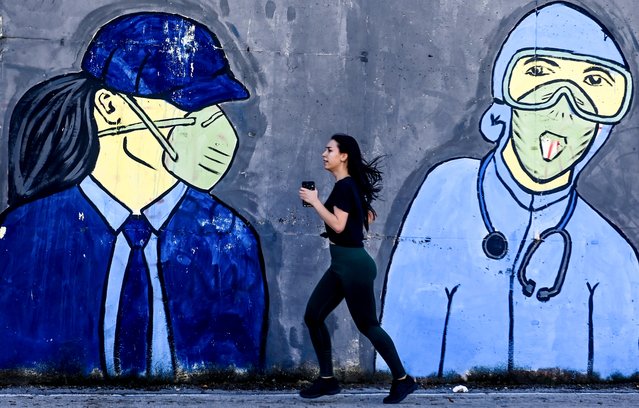 A woman runs in front of a mural inspired by the COVID-19 coronavirus pandemic in in Skopje, North Macedonia, 30 October 2020. The number of newly infected COVID-19 patients over 24 hourse in North Macedonia rose to a record number since the pandemic began.The capacity of the hospitals in the country are very close to be full. The Macedonian parliament voted on changes in the legislation regarding the protection of the public from infectious diseases. These changes make wearing face masks mandatory outside of the home. (Photo by Georgi Licovski/EPA/EFE) 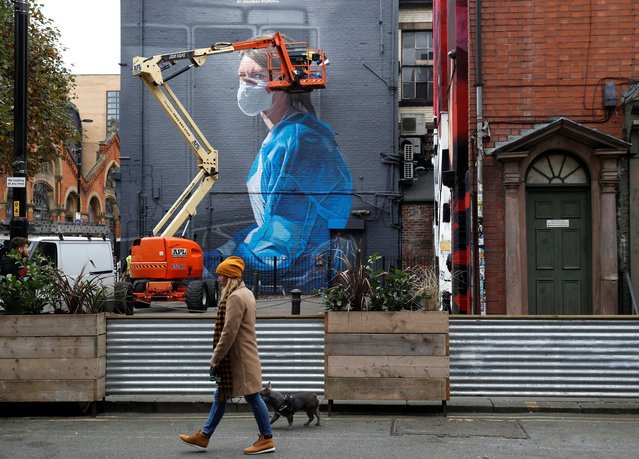 A woman walks past as an artist works on a mural during the outbreak of the coronavirus disease (COVID-19), in Manchester, Britain October 18, 2020. (Photo by Phil Noble/Reuters) 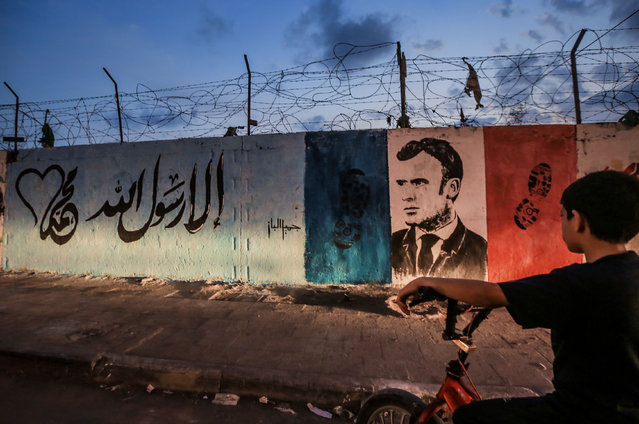 A mural on a wall shows French President Macron and the French flag with shoe prints in protest against Macron’s latest comments about Islam in Gaza Strip on October 28, 2020. (Photo by Abed Alrahman Alkahlout/Quds Net News/ZUMA Wire/Rex Features/Shutterstock) 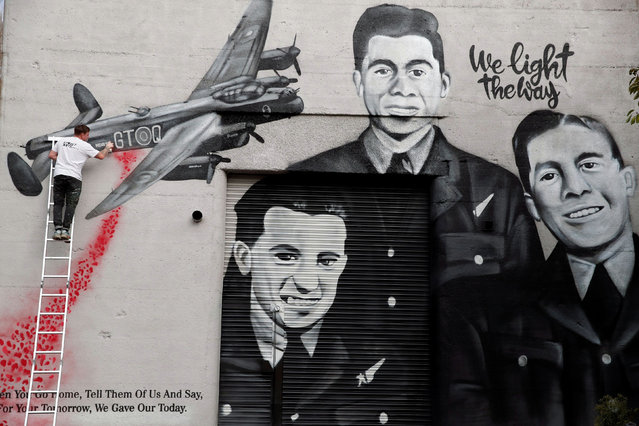 Street artist Nathan paints a mural at the derelict RAF Upwood base near Ramsey, England, ahead of Armistice Day November 9, 2020. The painting is in honour of Jack Watson, now 96, and his crew members who served with the RAF on the Pathfinder Force during the second world war. (Photo by Andrew Couldridge/Reuters) 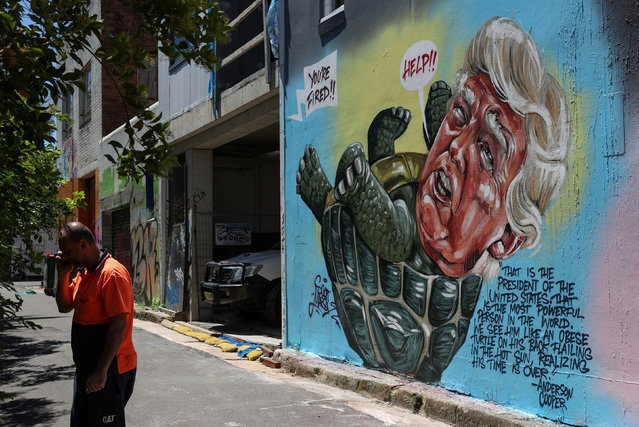 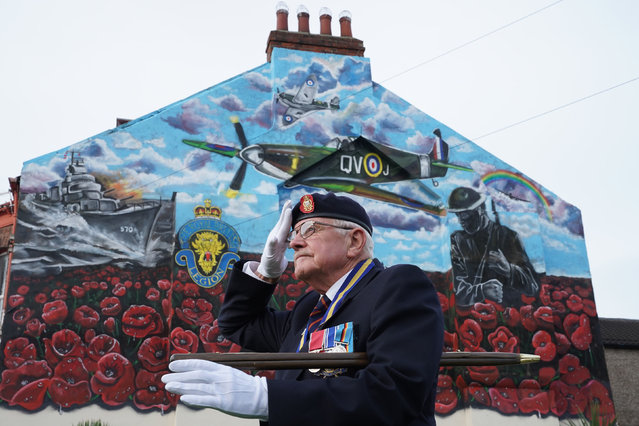 Eric Howden BEM, 76, chairman of the Redcar British Legion who served with the Royal Ordnance Corps, in front of a commemorative war mural in Redcar, North Yorkshire, ahead of a two minute silence to remember the war dead on Armistice Day on November 11, 2020. (Photo by Owen Humphreys/PA Images via Getty Images) 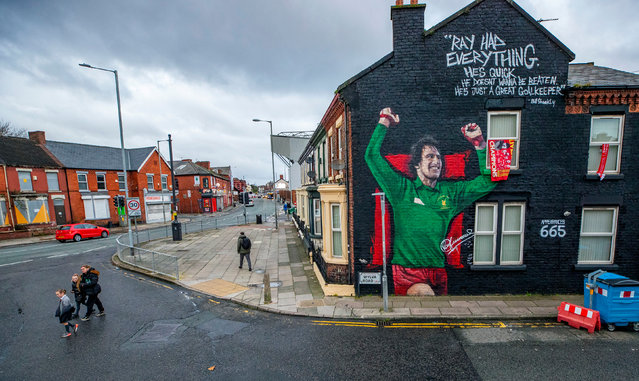 A mural of the Liverpool and England goalkeeper Ray Clemence adorns the gable end of a house in Anfield on November 16, 2020. Clemence died yesterday at the age of 72. (Photo by Peter Byrne/PA Images via Getty Images) 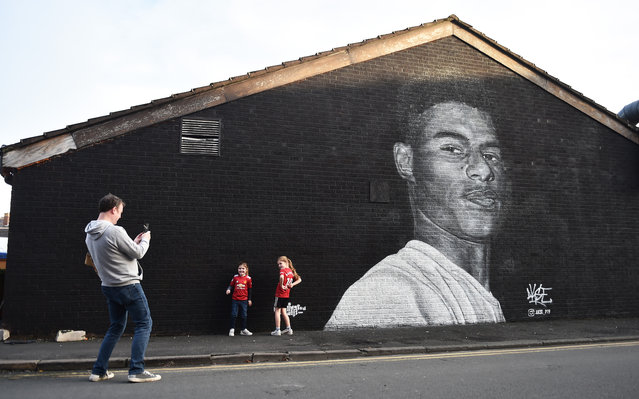 Two young girls pose for a photograph at a mural of Manchester United footballer Marcus Rashford, created by local street artist Akse, after the footballer received an MBE for his work campaigning for the government to provide meals to impoverished children on November 07, 2020 in Manchester, England. (Photo by Nathan Stirk/Getty Images) 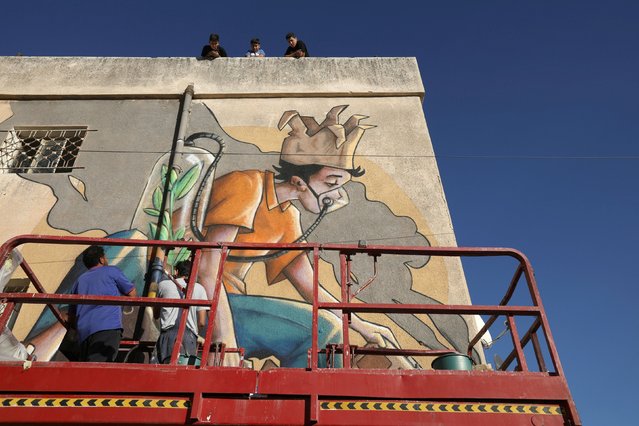 Jordanian artist, Yazan Mesmar, works on his mural on a building as part of the Baladk festival, which includes murals across Amman all with a message encouraging people to protect the environment, Jordan, October 13, 2020. (Photo by Muhammad Hamed/Reuters) 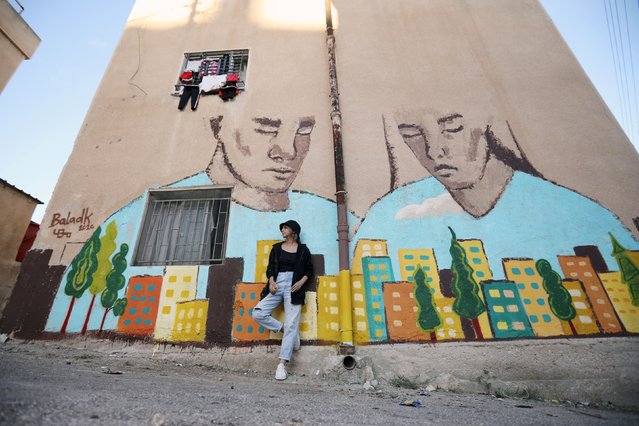 Jordanian artist, Maha Hindi, poses in front of her mural on a building as part of the Baladk festival, which includes murals across Amman all with a message encouraging people to protect the environment, Jordan, October 13, 2020. (Photo by Muhammad Hamed/Reuters) 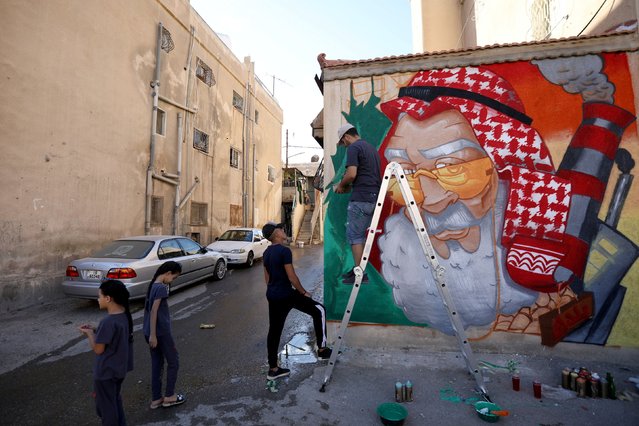 Jordanian artist, Yazan Bahar, works on his mural on a building as part of the Baladk festival, which includes murals across Amman all with a message encouraging people to protect the environment, Jordan, October 13, 2020. (Photo by Muhammad Hamed/Reuters) 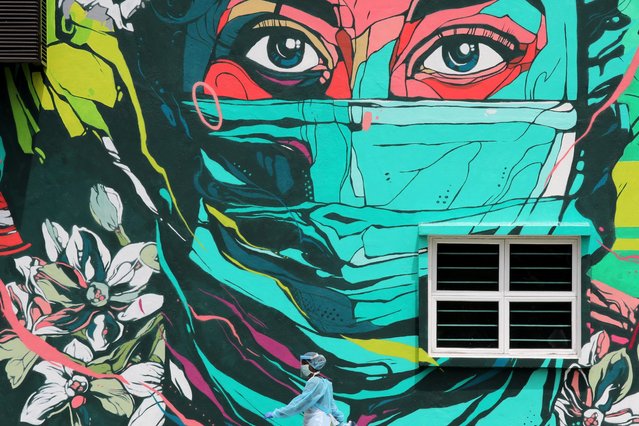 A medical worker wearing personal protective equipment passes by a frontliner mural outside a clinic, amid the coronavirus disease (COVID-19) outbreak in Kuala Lumpur, Malaysia on October 27, 2020. (Photo by Lim Huey Teng/Reuters) 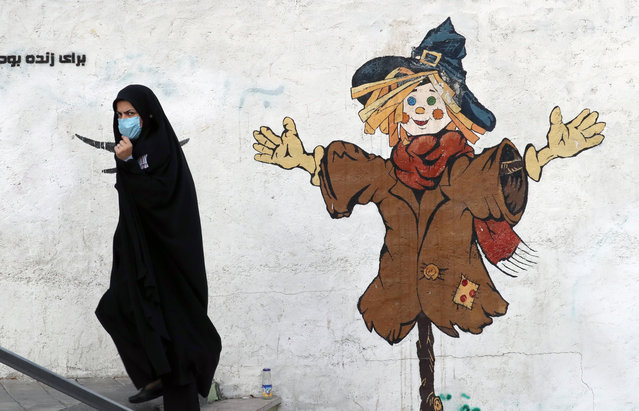 An Iranian woman wearing a face mask walks on a street in Tehran, Iran, 19 October 2020. According to the Iranian Health ministry, Iran reported its highest daily COVID-19 death toll of 337 and 4,251 new infections in past 24 hours as it appears that Iran is in a third wave of COVID-19 outbreak. (Photo by Abedin Taherkenareh/EPA/EFE) 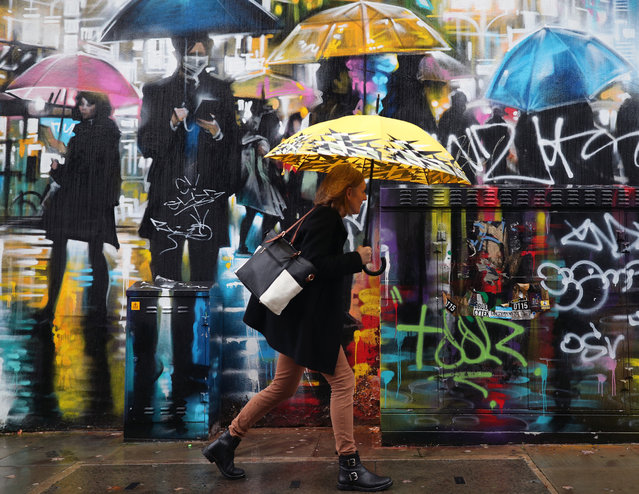 A woman with an umbrella walking past street art in Camden, London on October 21, 2020. Weather warnings have been issued as Storm Barbara is expected to bring gale force winds and heavy showers to southern parts of the UK. (Photo by Yui Mok/PA Images via Getty Images) 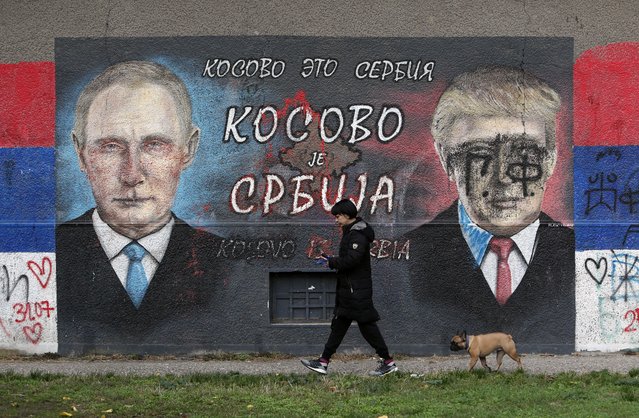 A woman with a dog passes by graffiti depicting the Russian President Vladimir Putin, left, and U.S. President Donald Trump vandalized with paint in a suburb of Belgrade, Serbia, Tuesday, November 3, 2020. The Cyrillic letters on graffiti read “Kosovo is Serbia”. For some Serbian leaders, U.S. President Donald Trump is a hero while his challenger Joe Biden is nothing but a “Serb hater”. So, there is no surprise that Serbs living in the U.S. were called on to vote for Trump in Tuesday's election nor that Serbia's populist president said his victory would be better for the country. (Photo by Darko Vojinovic/AP Photo) 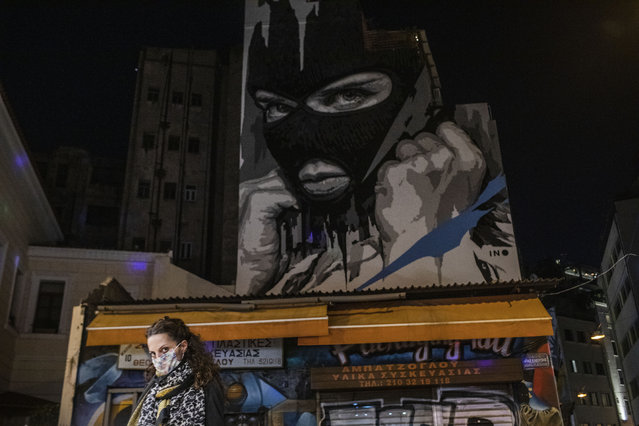 A woman wearing a face mask to curb the coronavirus walks in front of a mural created by street artist INO in the Psiri district of Athens, on Friday, October 23, 2020. (Photo by Petros Giannakouris/AP Photo) 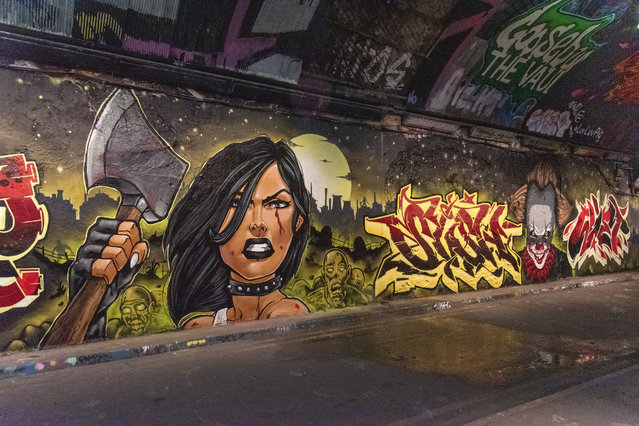 Graffiti of a woman with an axe part of the Halloween Paint Jam seen at the famous Leake Street Tunnel under Waterloo station on November 3, 2020. (Photo by Dave Rushen/SOPA Images/Sipa USA) 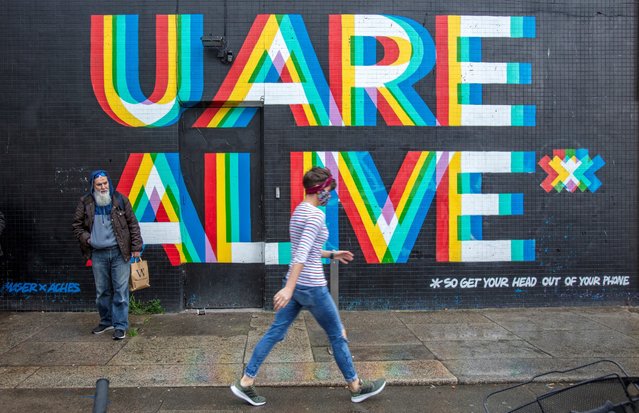 A pedestrian wearing a face mask or covering due to the COVID-19 pandemic, walks past a mural reading “U Are Alive..... so get your head out of your phone” in Dublin on October 19, 2020, amid reports that further lockdown restrictions could be imposed to help mitigate the spread of the novel coronavirus. Ireland will crank up coronavirus restrictions, prime minister Micheal Martin said last week, announcing a raft of new curbs along the border with the British province of Northern Ireland. (Photo by Paul Faith/AFP Photo) 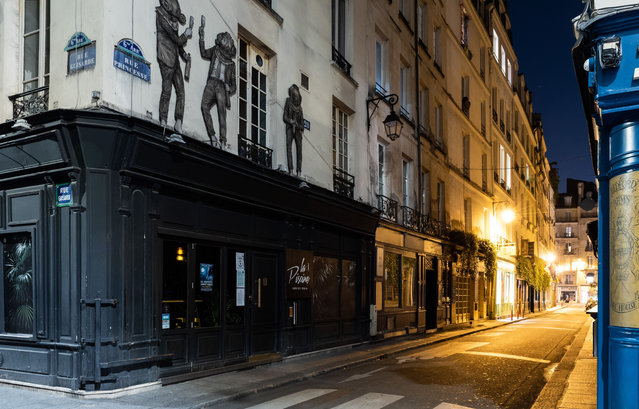 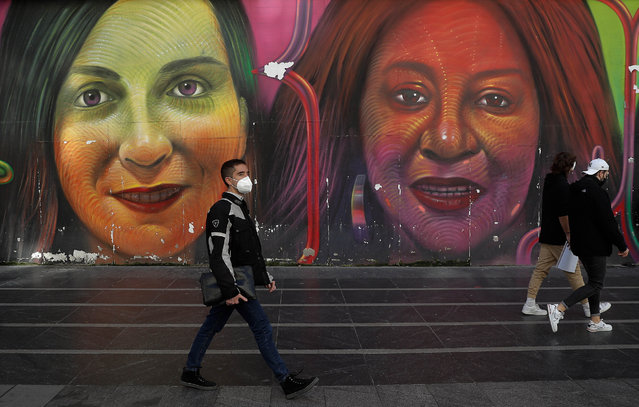 People wearing face masks are seen out as Spanish government extended the state of alarm until 9th of May after declaring it on Oct 25 to contain the second wave of novel coronavirus (Covid-19) pandemic following another record surge in cases, in Madrid, Spain on October 30, 2020. (Photo by Burak Akbulut/Anadolu Agency via Getty Images)
Edit Del
18 Nov 2020 00:05:00, post received 0 comments
Publication archive:
←   →
Popular tags:
All tags
Last searches: