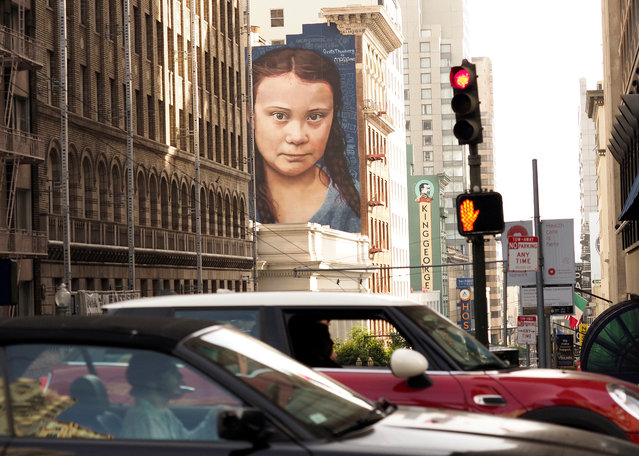 A mural on a side of a building depicts Swedish teenage climate activist Greta Thunberg, near Union Square in downtown San Franicsco, California, USA, 12 November 2019. The mural of Thunberg was painted by Argentinian muralist Andres Iglesias, who is also known as Cobre. (Photo by John G. Mabanglo/EPA/EFE) 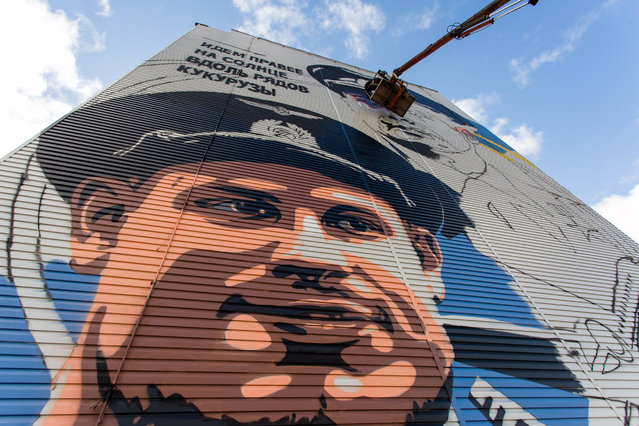 Artists of Samara's ArtWay studio paint a mural depicting the Ural Airlines' pilots Damir Yusupov and Georgy Murzin who landed an Airbus A321 plane in a cornfield on August 15, 2019 in Surgut, Russia on September 11, 2019. (Photo by Alexei Andronov/TASS) 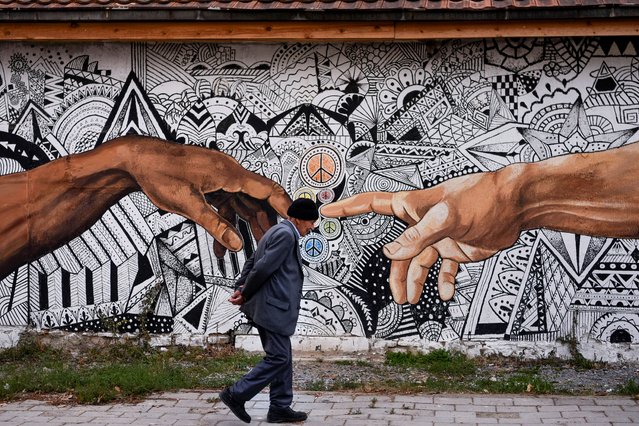 A pedestrian walks past a mural artwork painted on the wall of a house in the town of Ferizaj, Kosovo on November 3, 2019. (Photo by Armend Nimani/AFP Photo) 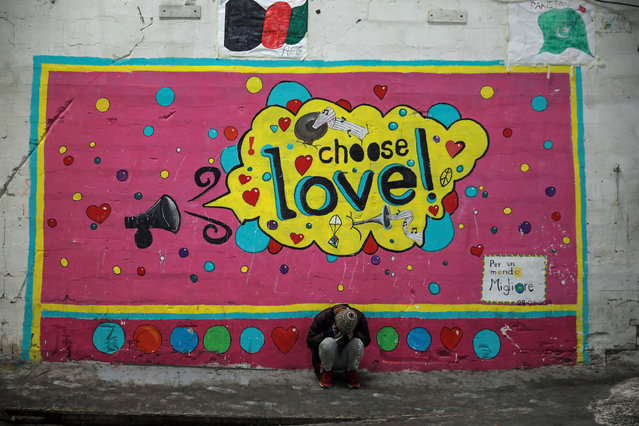 A migrant sits in front of a mural inside the Bira camp in Bihac, Bosnia and Herzegovina, October 30, 2019. (Photo by Marko Djurica/Reuters) 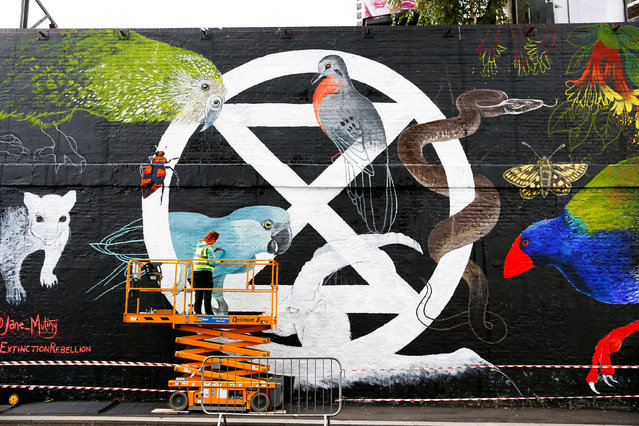 Jane Mutiny paints a Extinction Rebellion logo onto the side of a building in London, England on October 6, 2019. (Photo by Henry Nicholls/Reuters) 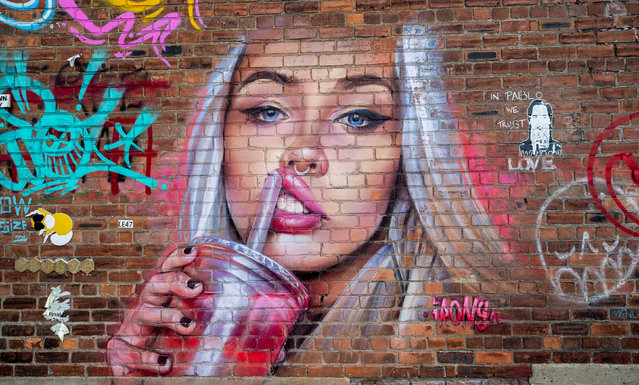 Street artist Irony’s mural of a young woman on Jamaica Street in Liverpool, UK on September 22, 2019. The city has recently been transformed with bold murals painted by local artists on walls and buildings. Recognisable faces including those of the Beatles, Jürgen Klopp and Stephen Hawking. (Photo by Peter Byrne/PA Wire Press Association) 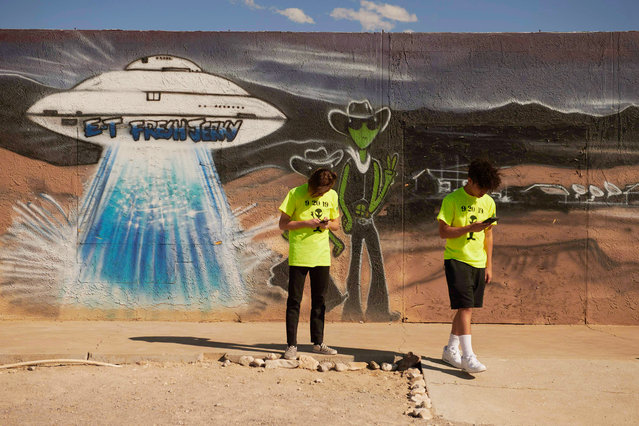 Visitors stop to take photos at E.T. Fresh Jerky in Hiko, Nevada, on September 19, 2019. A joke Facebook event named “Storm Area 51, They Can't Stop All of Us”, was created in June 2019. As of September 13, more than 2 million people had signed up for the event and a 1.5 million more had marked themselves as “interested”. Multiple alien related events are now set to take place over the weekend of September 20, 2019 along state Route 375 also known as the “Extraterrestrial Highway”. (Photo by Bridget Bennett/AFP Photo)

An Indian walks next to a painting on a roadside wall in Bangalore, India, 18 September 2019. Around 250 artists painted the walls with different vibrant color to create awareness about suicide prevention and mental health among people, as part of the World Suicide Prevention Day. (Photo by Jagadeesh N.V./EPA/EFE) 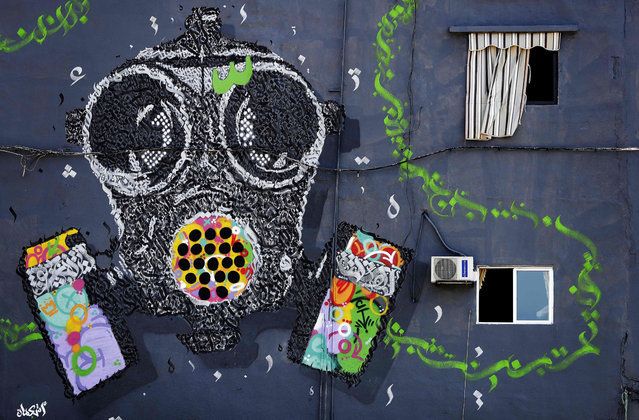 A mural painting by the Lebanese steet artists group Ashekman covers the wall of a building in the highly polluted area of Karantina on the outskirts of the capital Beirut on October 7, 2019. Greenpeace MENA collaborated with Ashekman, to create a mural the mural painting in order to grab attention on the issue of air pollution. (Photo by Joseph Eid/AFP Photo) 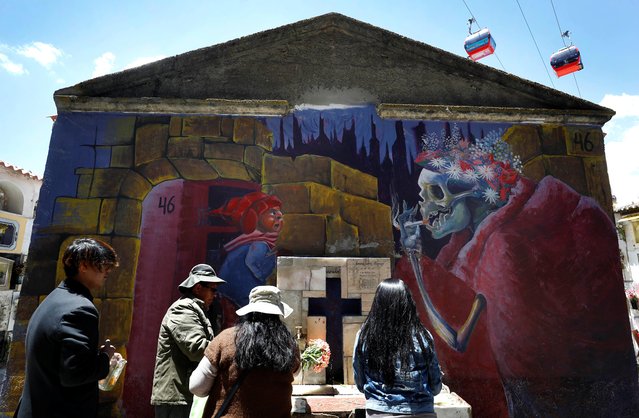 People water flowers as they attend the Day of the Dead at the central cemetery in La Paz, Bolivia, early morning, November 2, 2019. (Photo by Kai Pfaffenbach/Reuters) 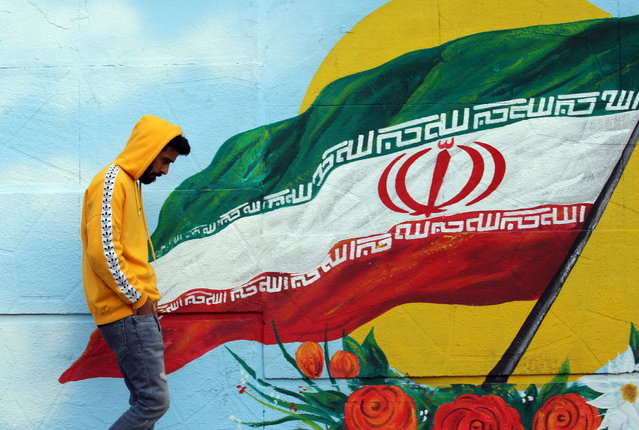 An Iranian walks next a wall painting of Iranian national flag, Tehran, Iran, 17 November 2019. According to reports, internet access has been limited in the country amid protests over increasing fuel price in Iran. (Photo by Abedin Taherkenareh/EPA/EFE) 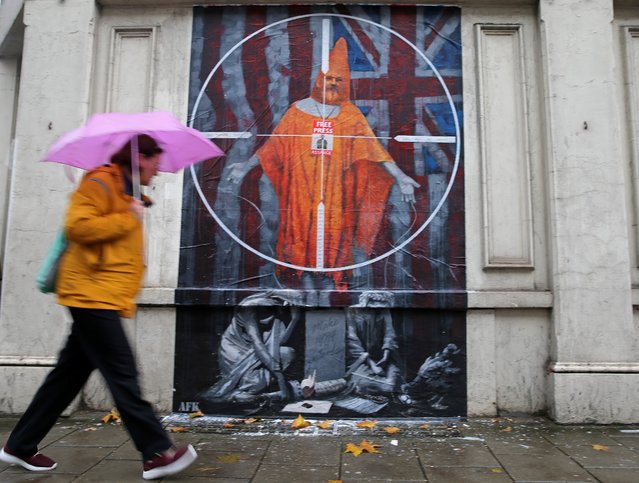 A pedestrian passes a graffiti mural of WikiLeaks founder Julian Assange, near Westminster Magistrates Court in London on October 21, 2019, ahead of a case management hearing in Assange's case. WikiLeaks founder Julian Assange was ordered Friday to make his first in-person London court appearance to determine whether he can be released from prison as he fights extradition to the United States. The 48-year-old Australian has been in custody at the high-security Belmarsh prison in southwest London since being dramatically dragged from Ecuador's embassy in April. (Photo by Isabel Infantes/AFP Photo) 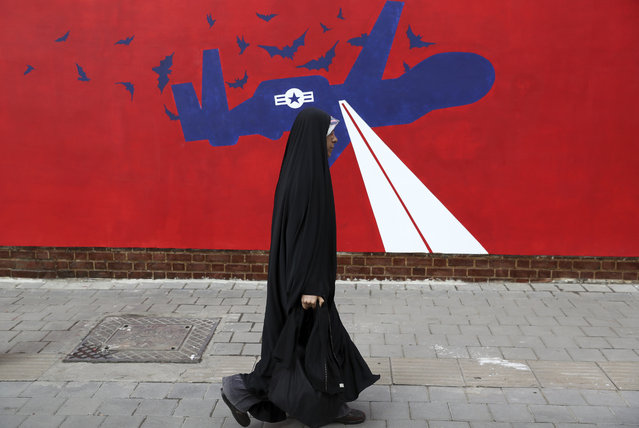 A woman walks past a new anti-U.S. mural on the wall of former U.S. embassy portraying the interception of Global Hawk US drone by Iran in Persian Gulf, after an unveiling ceremony in Tehran, Iran, Saturday, November 2, 2019. Anti-U.S. works of graphics is the main theme of the wall murals painted by a team of artists ahead of the 40th anniversary of the takeover of the U.S. diplomatic post by revolutionary students. (Photo by Vahid Salemi/AP Photo) 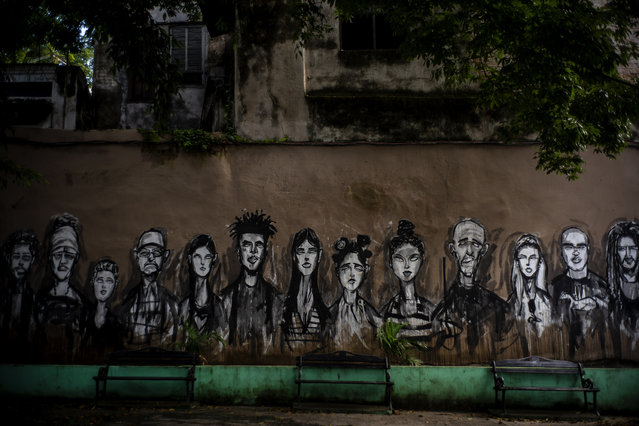 In this November 10, 2019 photo, a wall is covered by a mural of faces, representing local residents, in a plaza in Old Havana, Cuba. The city will celebrate its 500th anniversary on Nov. 16. (Photo by Ramon Espinosa/AP Photo) 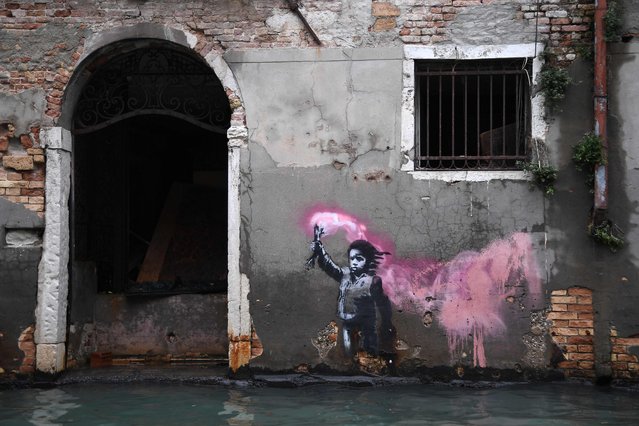 The artwork by street artist Banksy, that portrays a migrant child wearing a lifejacket and holding a neon pink flare, is pictured after an exceptional overnight “Alta Acqua” high tide water level, on November 13, 2019 in Venice. Venice was hit by the highest tide in more than 50 years late November 12, with tourists wading through flooded streets to seek shelter as a fierce wind whipped up waves in St. Mark's Square. (Photo by Marco Bertorello/AFP Photo) 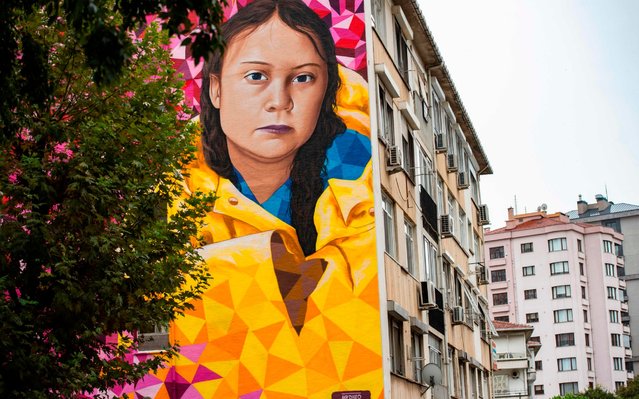 A mural with the portrait of Swedish climate activist Greta Thunberg, painted by Portuguese artists Mr. Dheo and Pariz One, is seen on a building in the Kadikoy district in Istanbul on September 20, 2019. Swedish teen activist Greta Thunberg, who inspired the Friday's climate protests around the world, in an interview with AFP has expressed hope that climate strikes will be a “social tipping point”. (Photo by Yasin Akgul/AFP Photo) 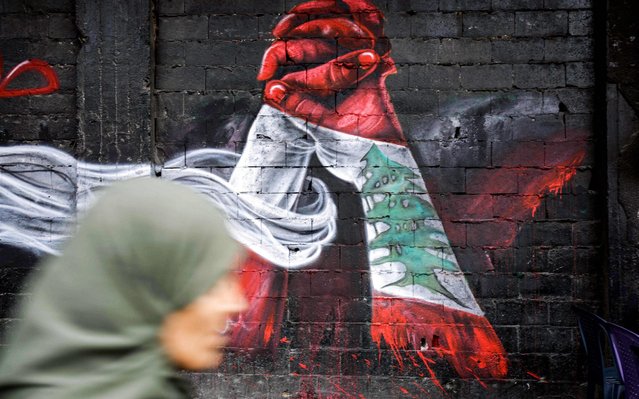 This picture taken on October 24, 2019 in the northern Lebanese city of Tripoli shows a woman passing by graffiti depicting two hands holding each other, both painted in the colours of the Lebanese national flag, painted by Palestinian refugee Ghayath al-Rawbeh, who was originally a Palestinian refugee in Syria and fled with the start of the Syrian crisis, painted on a wall at al-Nour Square in the city centre. (Photo by Ibrahim Chalhoub/AFP Photo) 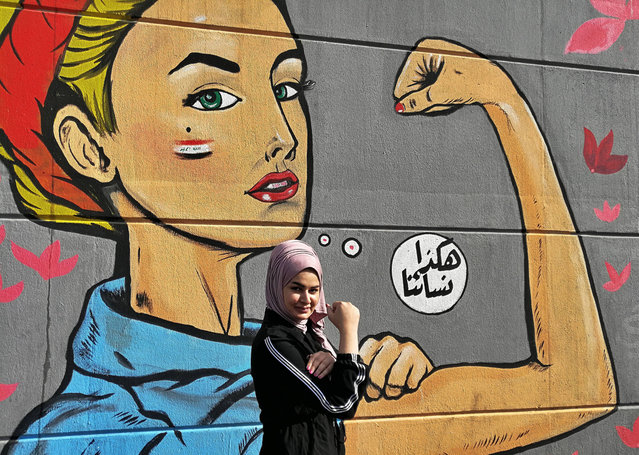 A woman poses for a picture near a graffiti with Arabic reading “those are our women” during ongoing protests near Tahrir Square in Baghdad, Iraq, Thursday, November 7, 2019. (Photo by Khalid Mohammed/AP Photo)
Edit Del
19 Nov 2019 00:03:00, post received 0 comments
Publication archive:
←   →
Popular tags:
All tags
Last searches: